thd9791 said:
I don't think any of these are "owned" by anyone, and none of them are private images. Please correct me RPF if there is something I missed. I found these through pintrest, the RPF and google over the years, or screenshotted them from the movie myself. The PropBlog shot was color corrected by someone on here publicly
Click to expand...

I don't want to de-rail - maybe this would be a good discussion in another thread, but:

In regards to "owning" the images - are we talking actual legal rights to a licensed image? Because let's be real - few of us have actually taken photos of the screen used blasters. You can certainly license images, which is one thing. You can make contacts with someone in publishing, at lucasfilm etc to get *access* to images at better resolutions, but they aren't your photos unless you purchase them or the rights.

Now, getting credit for bringing these images to the community is another thing.

But so is indexing, editing, collecting images, deducing details from there - I'd consider that another thing all together.

I don't really have a dog in this fight, but I'd be curious if images actually owned by members are appearing in threads uncredited (though when you post an image online, anyone can copy pasta it and you know that going in) vs posting images you got through connections and jeopardized those relationships by posting them publicly to begin with.

As more of a costumer than a hard edges prop maker in regard to Solo, I have seen plenty of the same images "owned" by members published in books and magazines at different and better resolutions. So who should I point to to credit? The photographer? The publisher of the book? Me, because I posted it?

I don't think it is as black and white as it has been made to be.

RPF PREMIUM MEMBER
No one has claimed to own these pics outright, as in copyright. Some images have been edited, and that work deserves credit and a say in how the image is to be used. Thankfully all is copacetic in regards to the pics so far, and everyone I’ve tagged with photo credit has been kind enough not to object.
I think it all boils down to credit and association. If someone doesn’t want their hard work used in this context they can approach me privately, or use the report button.

One thing to note, the ANH Hero was also in the Greedo portion of the Cantina scene. The closeups were the Alternate DL-44, but in all of the other shots, it was the Hero blaster in his holster and in his hand..when he 'actually' shot Greedo =b

deadbolt said:
One thing to note, the ANH Hero was also in the Greedo portion of the Cantina scene. The closeups were the Alternate DL-44, but in all of the other shots, it was the Hero blaster in his holster and in his hand..when he 'actually' shot Greedo =b

I’ll add a little clarification to that section. Thanks for the heads up.
I had assumed by using the word “insert” that people would know, but I now realize that it’s a little vague.
Edit: I just re-read your post and realized I had forgotten to list the cantina scene with the hero prop. Fixed.
Last edited: Dec 17, 2021

Oof, that one stings the old nerd cred.
It was the auto correct.. yeah that’s the ticket.
I’m on it.

I just wanted to add my two cents in about photo sharing..

I myself have also purchased photos with $, and my primary reason for doing so was to share. Not to hoard or post and take credit as though I took them myself. If we didn't take the photos in question, despite how much it cost and/or how much effort we put into getting them, we don't 'own' them by any realistic means. The public deserves to know.

If we post photos online, (since the old days even, anyone remember A.S.A.P. ??) it should obviously be usable by the public community, it always has been. Not just to look cool on the internet and get mad when someone uses said photos. It's not a code I made up, It's been a standard Internet code of conduct for many, many years now.

I don't mean to come off too mean or anything, but that's simply the reality of this particular subject. I'm sorry if it offends someone.

RPF PREMIUM MEMBER
Since everyone is throwing their hat into the ring with regards to photo sharing (or lack there of) here’s my view point..

It’s not just photo sharing. It’s the ownership people take within the hobby is what is really upsetting. When I first got involved with creating these props it was pure joy and high adventure with tons of inspiration to draw from. Learning as most do by studying what came before. Looking for ways to improve and add details to where another lacked. By creating something that didn’t exist prior and learning many facets along the way is truly most exhilarating. Painting, assembling, CAD design, 3d printing, die and tapping, working with milling machines.. everyone knows that list is LONG and forever growing. It’s an endless adventure one takes when starting down this path.

So when it comes to photo sharing it’s extremely important that..

1/ you just do it.
2/ you do it knowing that in the end something better might come of it.
3/ after which you step back and remove yourself from the equation. Besides control is an illusion.

There is no place for selfishness or ownership. We are all simply standing on the shoulders of giants. Period. The fact that scarf man has to put “names” with who shared what within this thread is really kind of silly. I have tons of pictures saved. I couldn’t begin to tell you who or where I got them from. But the fact that one now feels censored from resharing them in any way is simply wrong. It certainly does nothing for this hobby we all love so much.
Last edited: Dec 24, 2021

RPF PREMIUM MEMBER
I didn’t have to credit the pictures, I wanted to give recognition to those who shared.
I wanted to illustrate that I wasn’t doing this alone, and that even though I’m standing on the shoulders of giants, I wipe my feet first.

RPF PREMIUM MEMBER
Well said but honestly we all wipe our feet first or we wouldn’t be welcomed back here. It’s just strange that this conversation even has to take place. But I also understand that for this thread to evolve people will have to share pictures openly and honestly. Giving credit hopefully will encourage some to be more forthcoming. There are so many uncredited people within this hobby and those are the giants I’m referring to.

RPF PREMIUM MEMBER
Bump for the new year (my twentieth on the RPF) how about some comments, on blasters I mean, not how long I’ve been bumping threads here.

I believe there were 3 blasters (excluding resins) used in ESB.

I believe there were 3 blasters (excluding resins) used in ESB.

What do you mean full port and cut port?

What do you mean full port and cut port?
Click to expand...

The light port on the M19 is cut on Luke’s, and full on Hans

RPF PREMIUM MEMBER
This is what I've always known too - the pictures on set and in promo shots only show real guns and the Hoth MGC. While it's true, like the possible ANH backup, there might be an MGC out there from Empire filming, we've decently matched Flash Hider weathering on screen

RPF PREMIUM MEMBER
I suspect also that in the scene where Han shoots, the blasters were only capable of firing one round. Having built a few real Mauser blasters now, the threaded studding messes up with the magazine, so it was probably not functional and could only hold one round. Hence the two pistols.

What are the best images of the real blank fire mausers - Luke and Han.?

CWOODREPLICAS said:
I suspect also that in the scene where Han shoots, the blasters were only capable of firing one round. Having built a few real Mauser blasters now, the threaded studding messes up with the magazine, so it was probably not functional and could only hold one round. Hence the two pistols.
Click to expand...

Id have to look again but I think in ANH he fires more than once.

On the real movie props the mounts were brazed or welded and the threaded rods should not have entered the mag well. They would be welded to the outside.

I'm new to the other blasters so I need to catch up a bit.

This is the Han blaster auctioned.

are there good images of the real HERO? Has it been sold or displayed.? 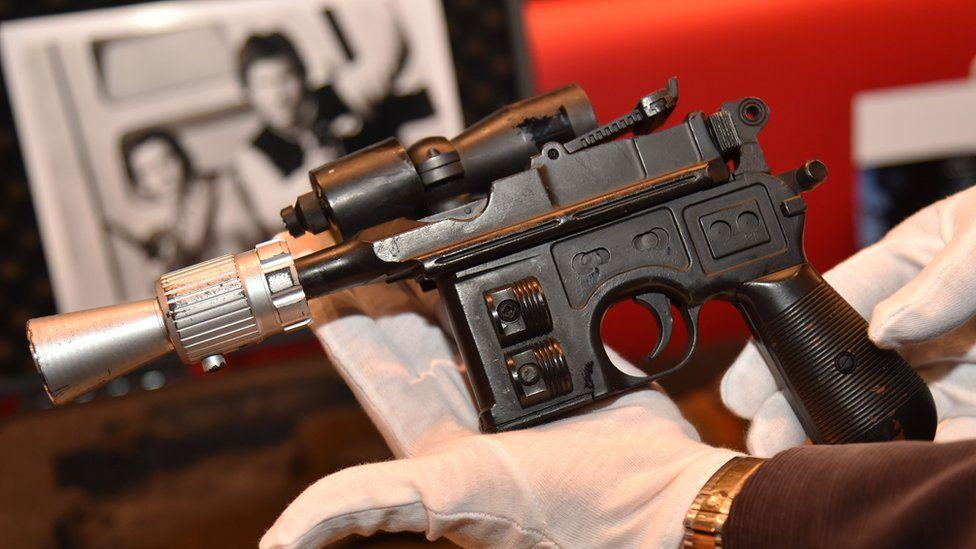 Spoiler prop from Mando series finale. Do not read until you've seen it!
39 40 41

Lets Do The Idiot Challange-it will be fun
2