Some of you will remember my old Reveal mask I made back in 2004/2005 from a Natty kit with added bits from various sources, mainly the machined parts from Captain Iglo and parts from Stevel48 at the old Reveal Forum.

Back then it was considered half decent even though many of the parts were inaccurate and the inside was not detailed. 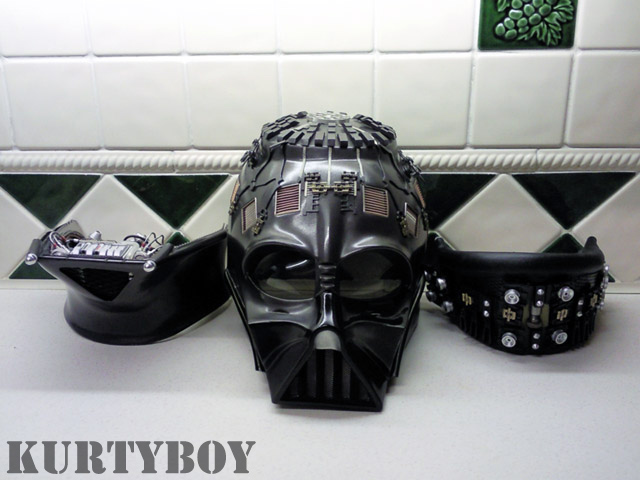 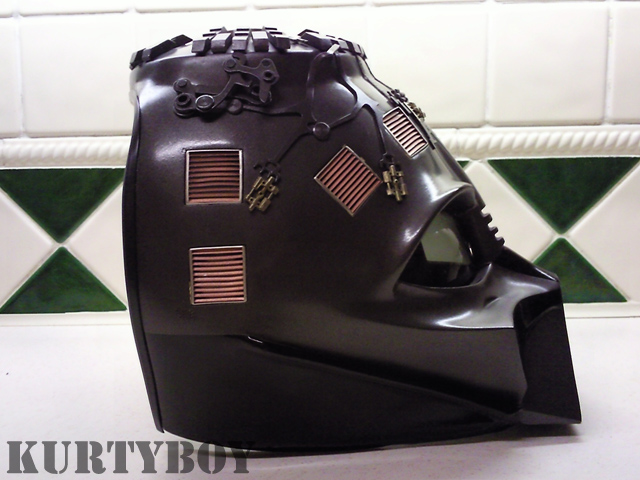 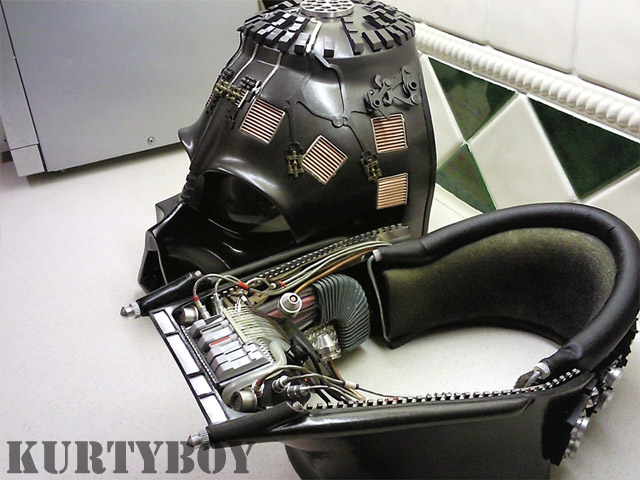 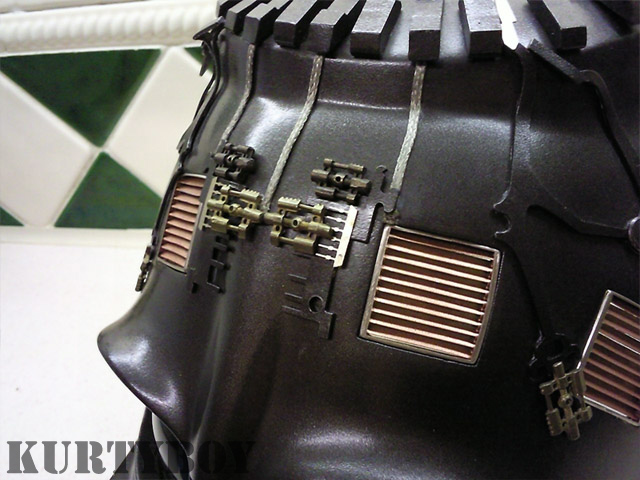 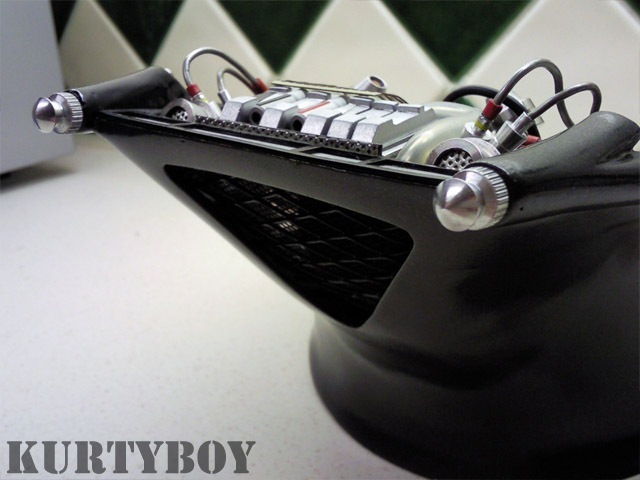 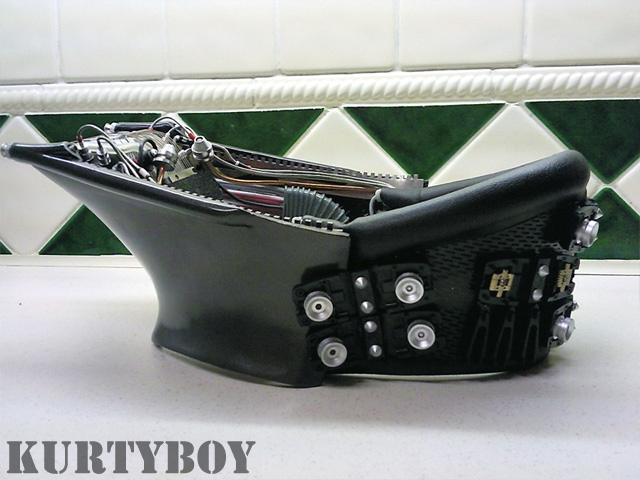 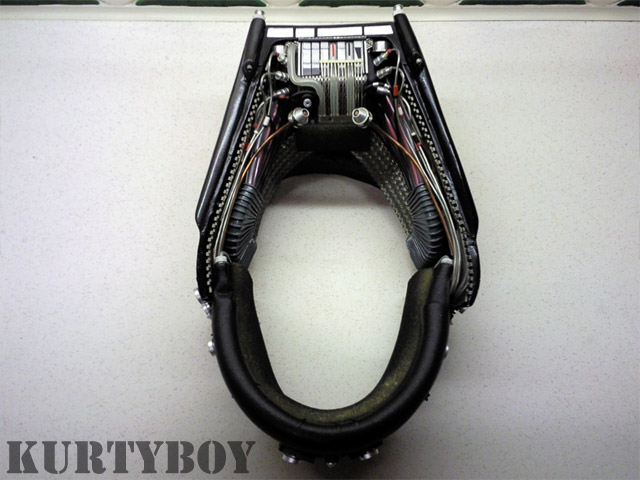 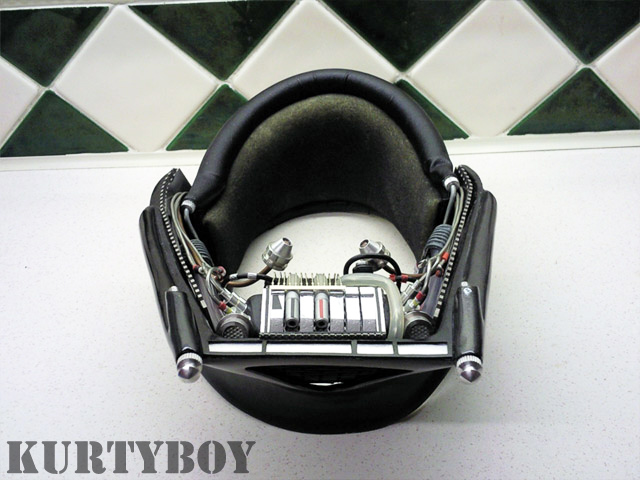 It found a new home a few years ago but I had always planned on making a new and more accurate mask using only the best parts available and as many found parts as possible. I actually started collecting parts for it around 2006 so it is already seven years in the making!

After waiting years for someone to offer a fibreglass base mask that met my standards, including several proposed runs that never happened, in 2009 a member here finally gave me the chance to buy one. Yes, it was a Ketzer mask! Or so I thought.

This mask turned out to be quite simply the worst piece of (re)casting and fibreglassing I had ever seen in my life. Not only was the outside very 'rough round the edges', the details were smooth, and the upper and lower parts of the mask did not line up even remotely, but absolutely no care whatsoever had been given to (re)molding the inside of the mask. Don't forget that nearly half the inside of a reveal mask is visible in the final piece and considering the effort Ketzer put into the details inside his mask, it was a crime to destroy them. It looked like only the outside had been (re)molded and the fibreglass had just been slapped onto the inside followed by matting completely obscuring the original shape and detail. There were large solid areas of fibreglass where you could see where the original shape had been before it was (re)cast.

This is what it looked like (actually, it looked even worse than this as some very basic trimming and shaping had been done by the time these photos were taken). 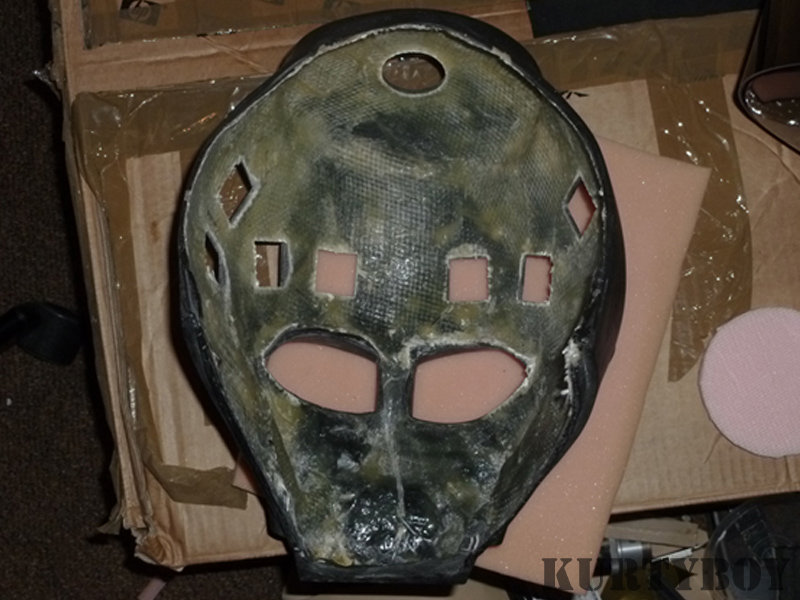 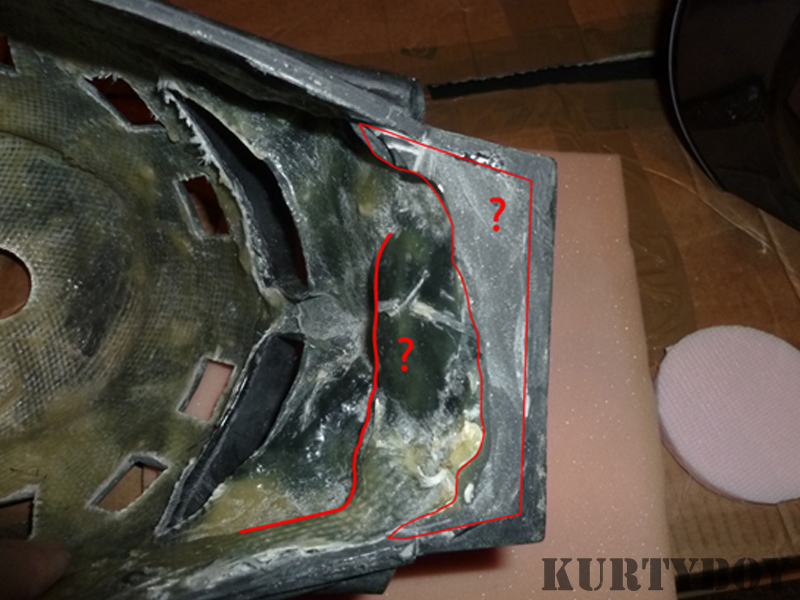 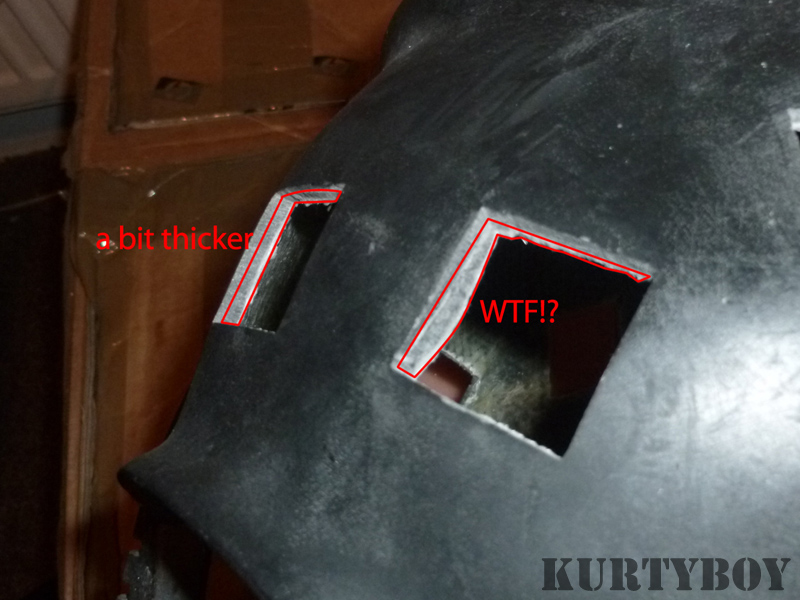 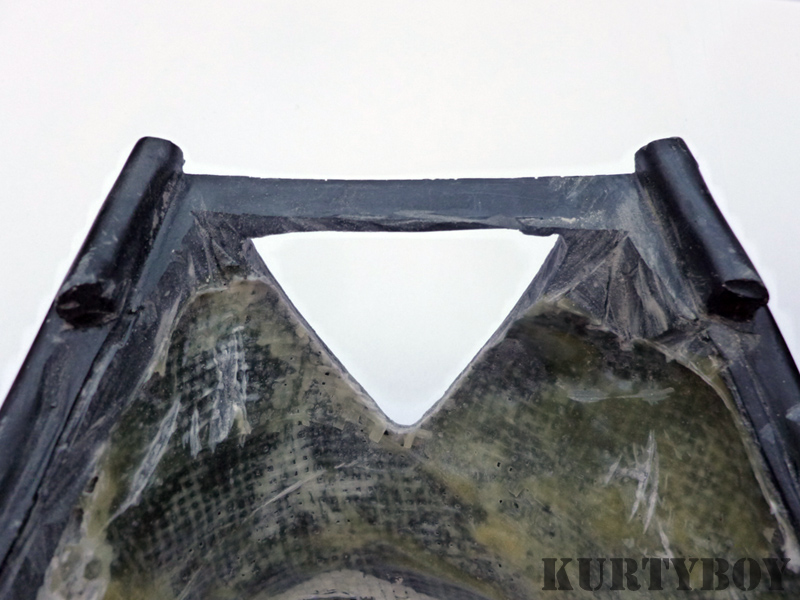 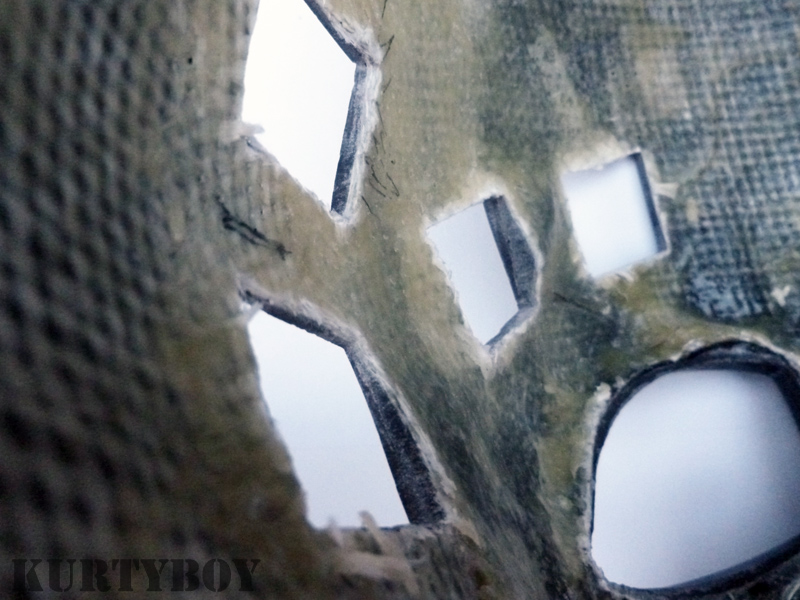 I was so disgusted with this casting that I shelved the project and eventually sold the mask a few years later. I then again waited for someone to offer a good base mask. That never happened so in 2012 I had no choice but to get back this heap of ***** in a trade and muster up the courage to fix it. I knew it would take more work than I had ever spent on a casting including severe reshaping of the whole structure, sharpening of details and sculpting the missing shape of the insides.

Here it is with all the parts I had collected. 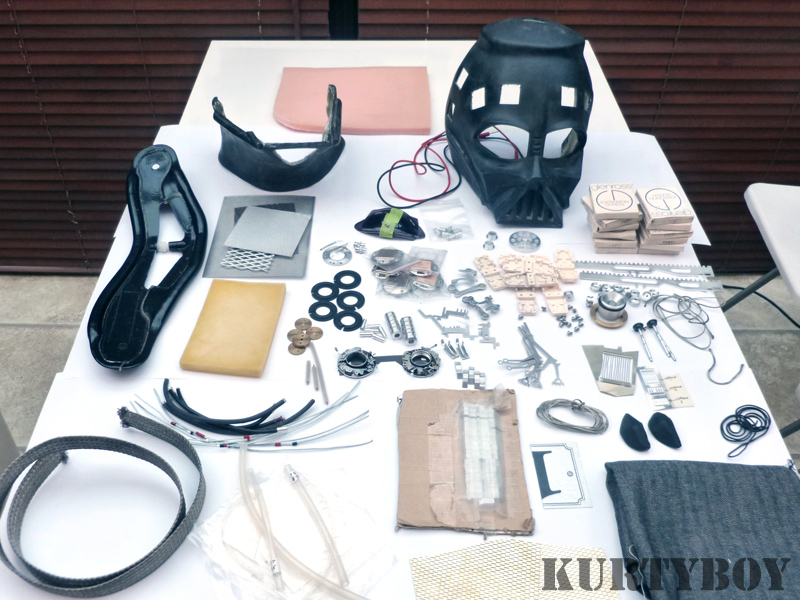 That is a lot of hardware to play with. It is also a long project you have ahead of you if you do not shelf it again. Good luck.

Thanks MrCafe, I'm gonna need it! Work is already underway and I am getting a lot of help mainly from Gonk27. I will post updates soon...

The ROTJ Vader Reveal has always been my favorite Vader helmet.

It'll be worth the wait. Not only am I going to restore missing details that were originally on Tim's mask, but I am also going to improve on them and sculpt additional fine details in. And also replace cast-in parts such as the rails on the underside of the upper mask, the large side tubes, portions of the small tubes and the crown with Plastruct parts.

Expect super accuracy unlike anything you have ever seen on a Reveal mask! I would even go as far as saying that when complete this could be the most accurate Reveal mask to date (until Gonk27 finishes his Über masterpiece, that is!)

The ROTJ Vader Reveal has always been my favorite Vader helmet.
Click to expand...

Okay, here's the piece of junk before I start chopping it up!

I started by cutting out the mouth triangle and also the area underneath it. 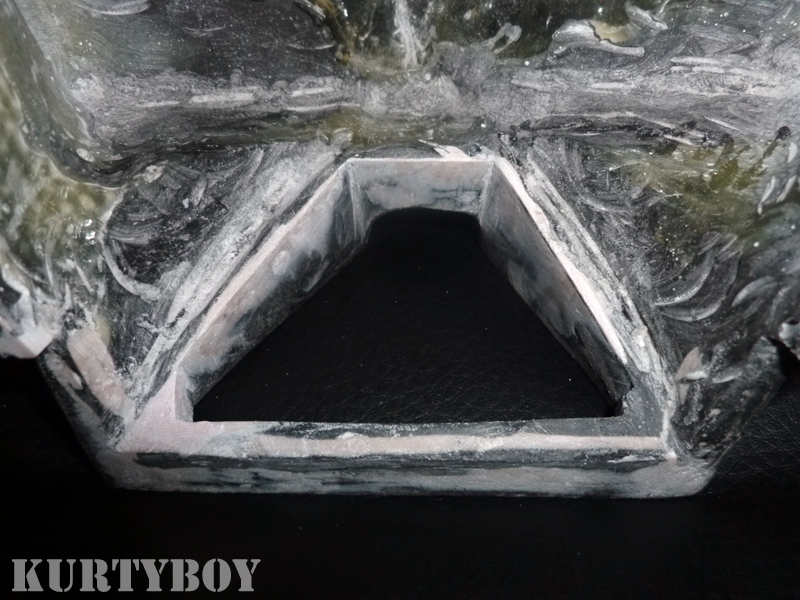 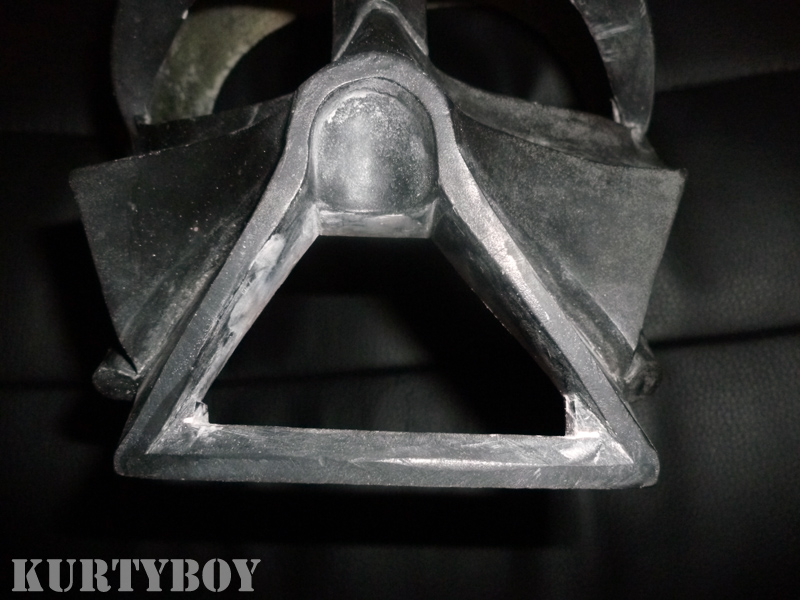 Slapping some primer on is always a fun time as you get to see how well you have done. 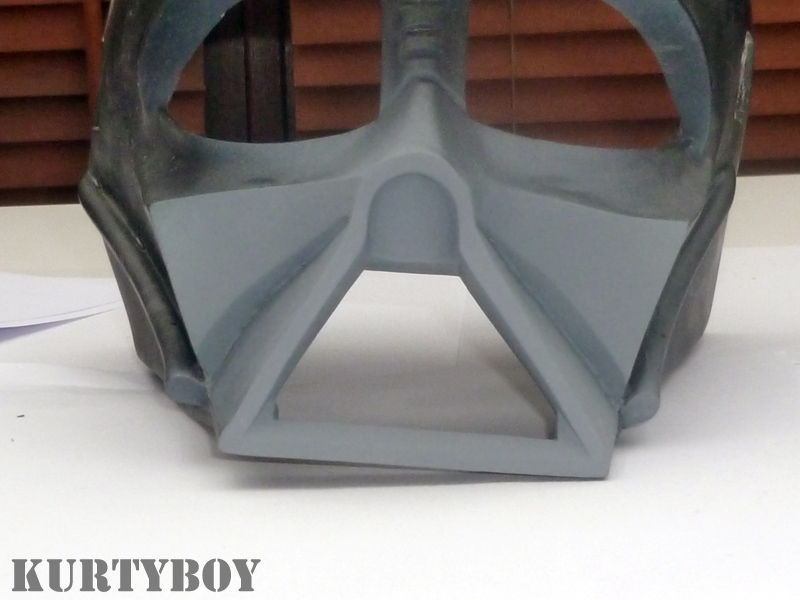 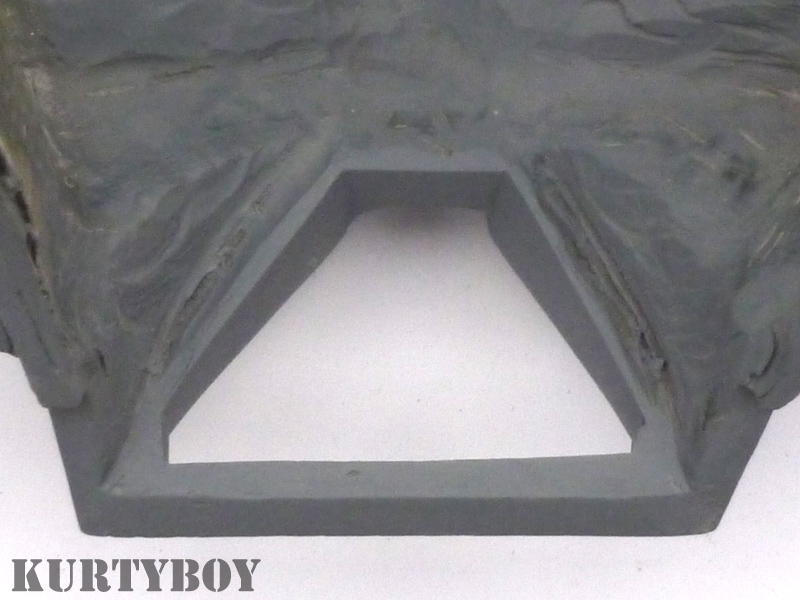 I also gouged out the inside of the mask to restore the missing shape of the cheekbones. This is necessary as the basic shape is supposed to be visible through the liner fabric. 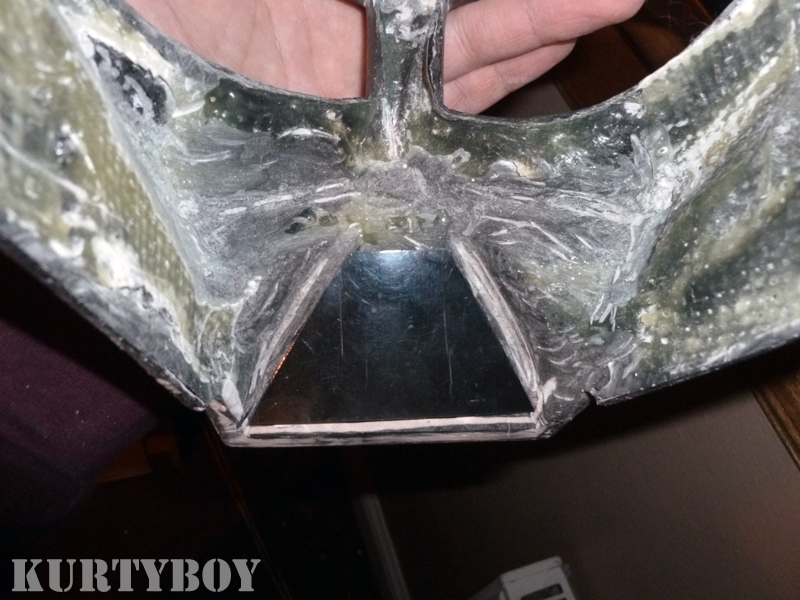 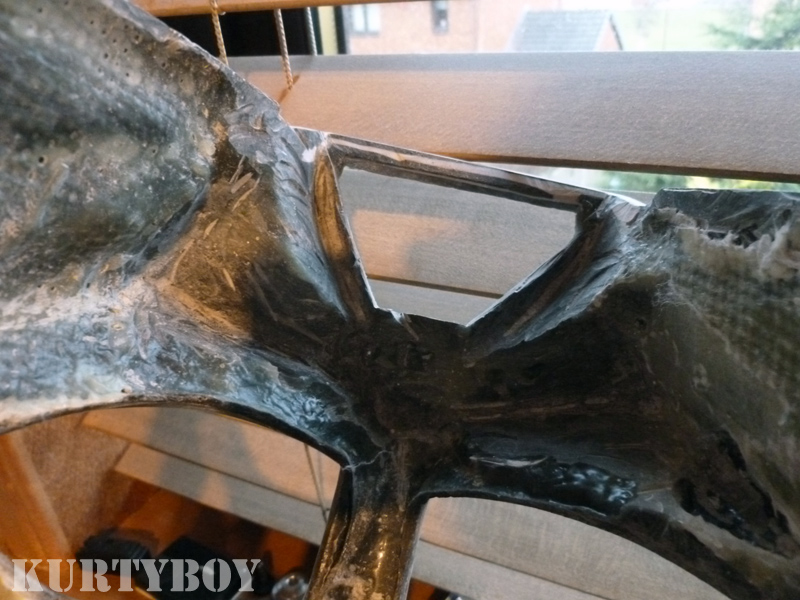 Looking forward to this, Vader is just pure awesome...will be looking for further updates.....

Next I replaced the front portions of the top tusk tubes with plastic tubing. This is clearly what they did on the real prop as there is a seam showing on one side where it has cracked. 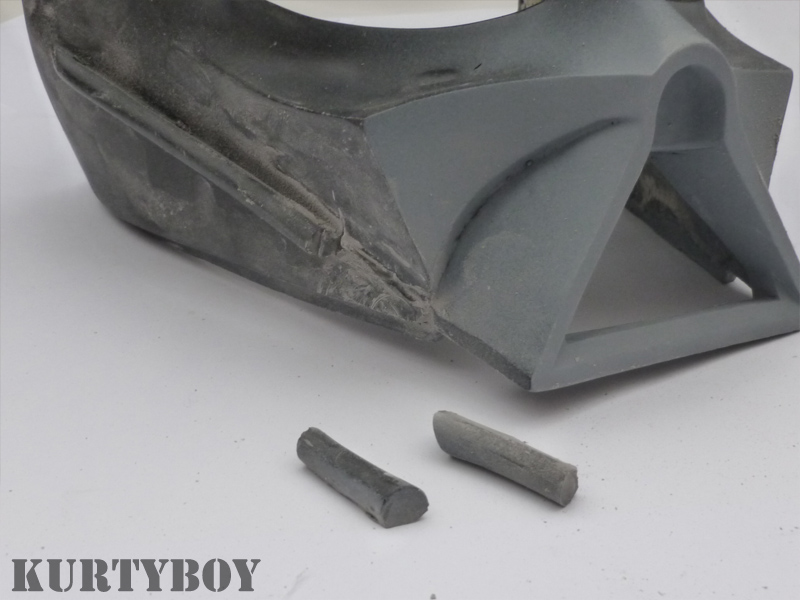 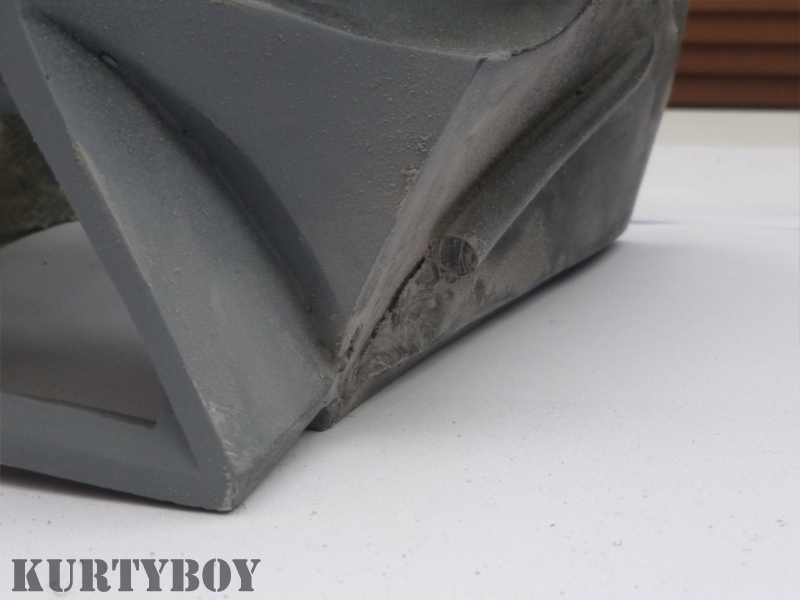 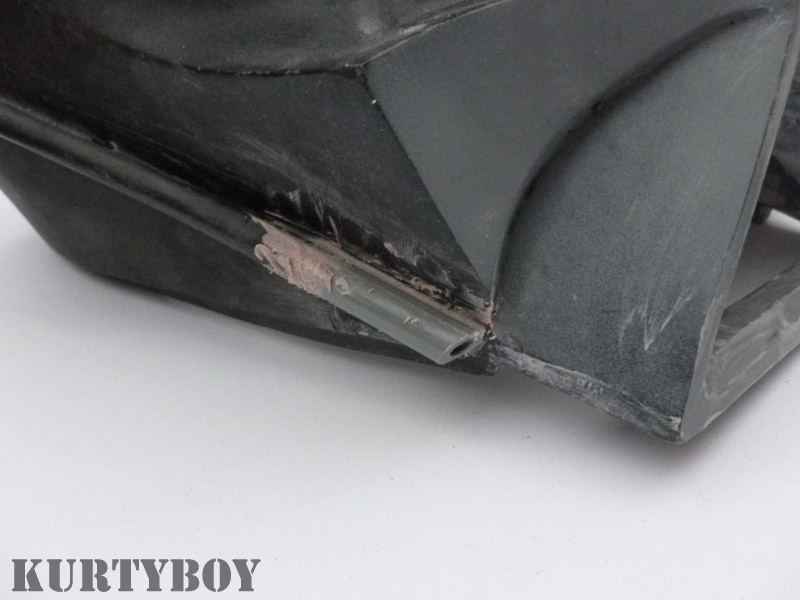 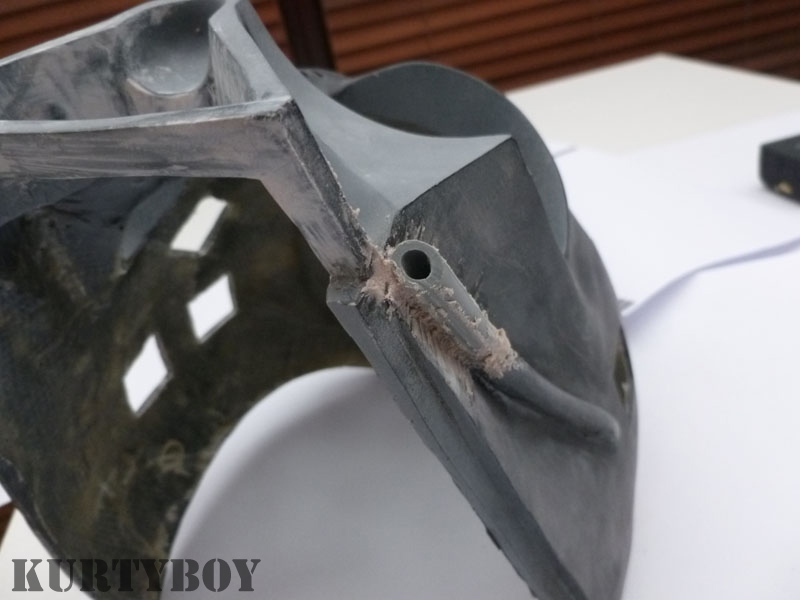 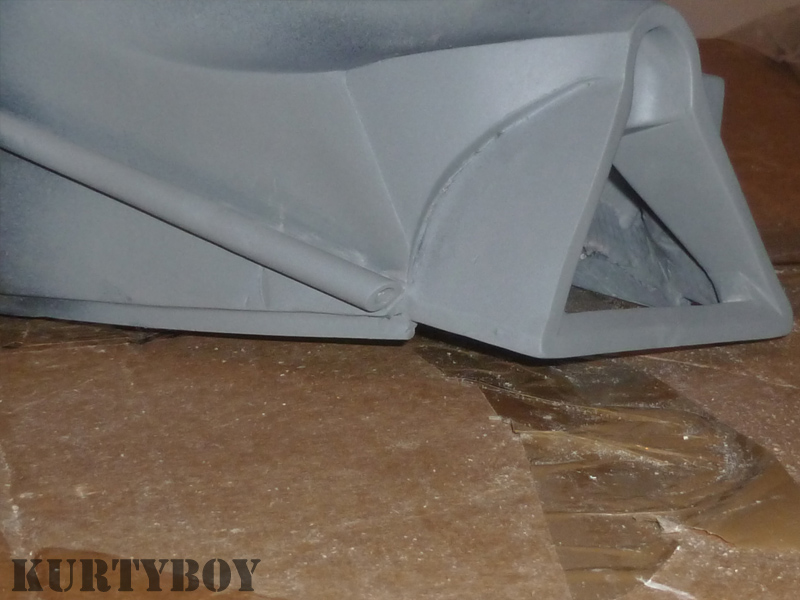 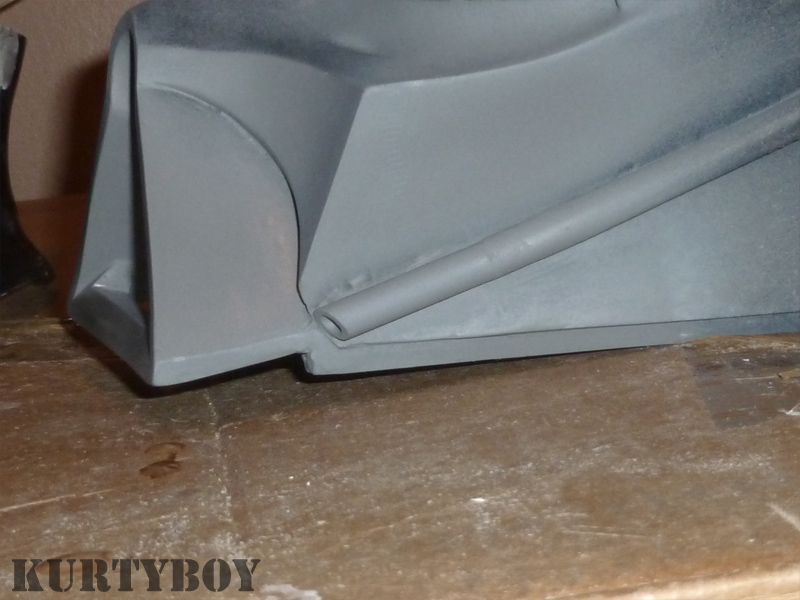 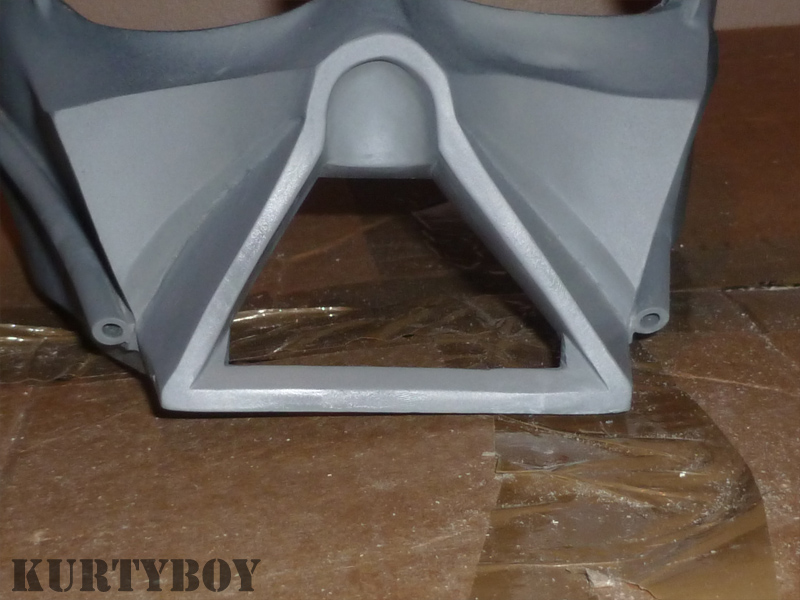 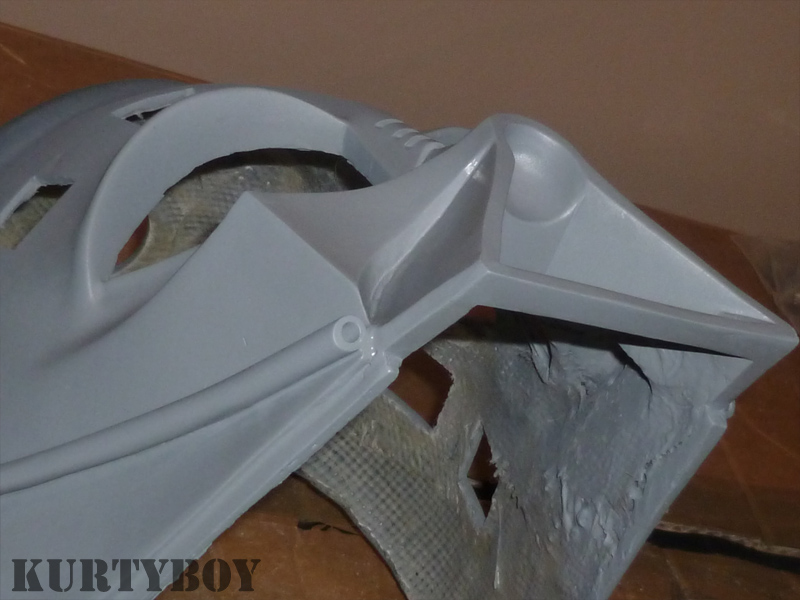 The underside of the face mask is unrecognizable from what it started out as. Still needs a lot of re-shaping though. 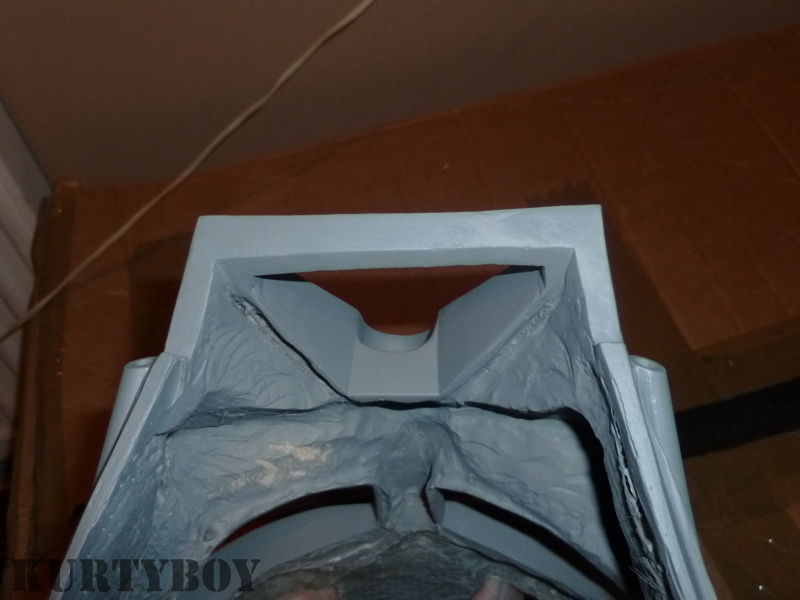 This is coming out great my friend!!

Say goodbye to the wonky cast-in fiberglass lower tusk tubes! They will be replaced with nice clean plastic tubing which is exactly what the prop department did on the original reveal prop. Since the reveal mask would be seen close up they must've wanted it to appear more machined than hand sculpted from clay.

I'm using Milliput for most of the larger filling jobs on this project.

After a quick filing down (you might also notice a spot of sharpening up the super soft cheek details - A lot of the original prop was sharpened up as well):

Still much work to be done, and I won't even go into the the problems lining up the rest of the mask yet!

Some general clean up filling air bubbles and removing casting 'warts', file, wet sand and apply primer, then wet sand again. Slight re-shaping to the 'fingernail' marks under the eyes.

One corner of the mouth needs to be extended a little.

My first attempt to get the two miscast parts to line up. The lower half was either a few generations earlier than the top or just very badly warped. I heated the neck with a hairdryer then taped it to hold it in the new narrower position while I fiberglassed it.

Unfortunately it still wouldn't line up well enough with the face so I tried something more drastic. I chopped it up and taped it together before fiberglassing it. At the same time I tried to get the curves at the back to line up with the face.

Damn. Even though the sides now lined up much better, I seemed to have made it too narrow at the front.

So I spread the pieces apart and fiberglassed it together again.

Right side now lines up well on the outside...

But not on the inside. This badly (re)cast mess is just too thick in places.

Left side is much better though. Small victory.

Coming up next: Filling the seems and smoothing out.

Damn, that's a lot of work. Great job getting this thing straightened out.

Still a lot of work to go before I can even think of detailing it. Believe me!

Awesome work so far Marcus!
Didn´t know you were such handy with miliput, fiberglass etc.

Keep the pics coming, they´re VERY inspirational for my own build (which won´t be started for at least the next decade :lol)

cool that you're working on it ... so will I pretty soon ... when time allows ... my jaws don't line up either from the back,
alas I have no clue about 'fiberglassing' after I'd cut the under jaw up as you did. It seems like DV ROTJ Reveal season on
here doesn't it?

Fiber glassing turned out to he easy but messy. Email me.
T

After filling the seams where I cut the mask it's trying to get the sides to line up and the large tubes to sit correctly time...

Need to either remove some material from the upper mask or add some to the neck here (marked in red).

Notice I have cut a small channel for the left tube as it appears to be slightly sunken into the mask on the original prop.

A new Chewe in Germany
2

Today at 6:41 AM
davewhite152
D
B
Sideshow Darth Vader Bust