I've been into scale modelling quite a lot in the last months. It started with the SS AT-ST (ROTJ) and then came the Cooper SD which I lit with over 2600 Fiberoptics and 61 LEDs. After completing that beast, I was not totally satisfied with the amount of FOs I used. But I did not want to build that thing a second time so I looked for a Super Star Destroyer.

I purchased a Korbanth SSD and just after it arrived, the Knightwire SSD was released. :/

In my opinion, the Knightwire is more true to the original, while the Korbanth is easier to light.

Both kits have numerous bubbles in the castings, especially in the buildings.

Here are a few comparison pics: 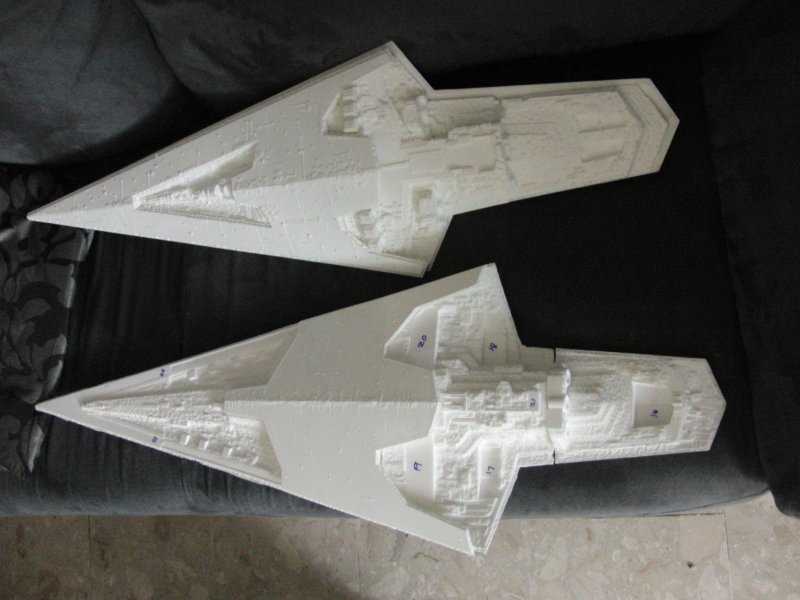 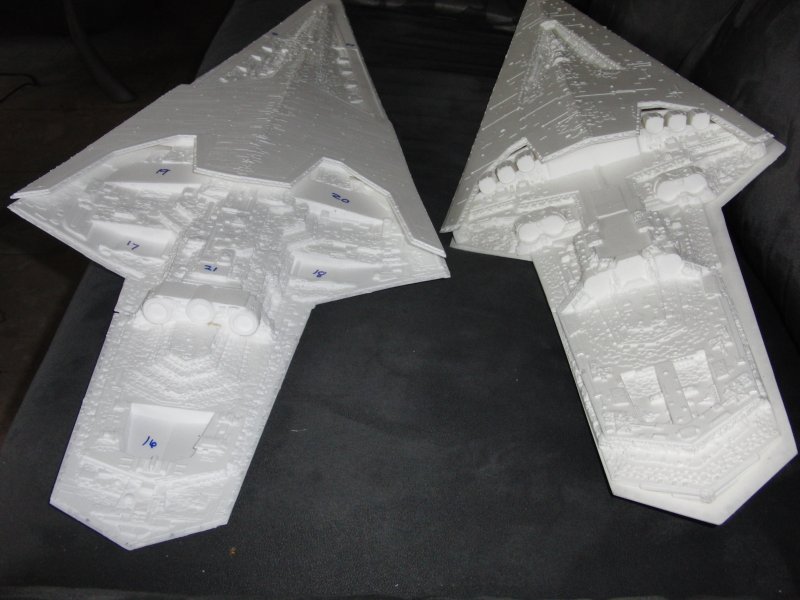 I chose the Knightwire to be build.

First I dremeled out a lot of material, to make room for the FO strands. 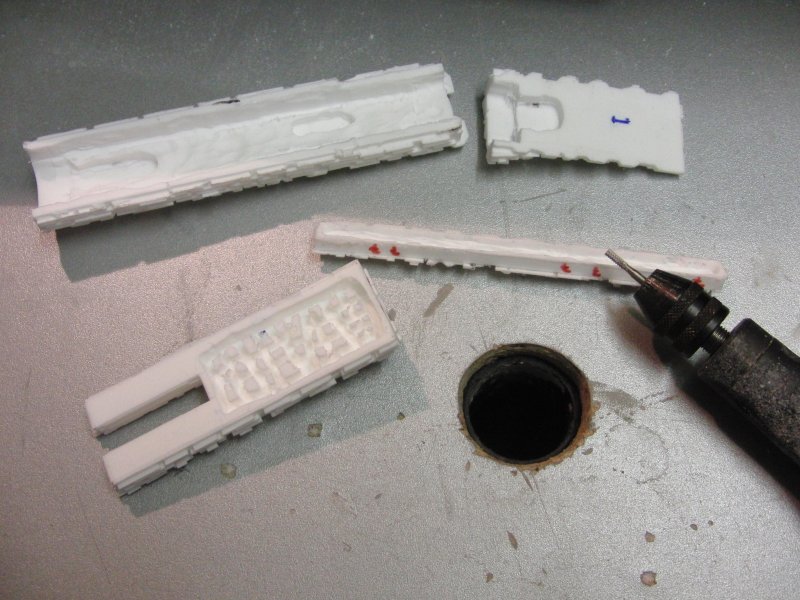 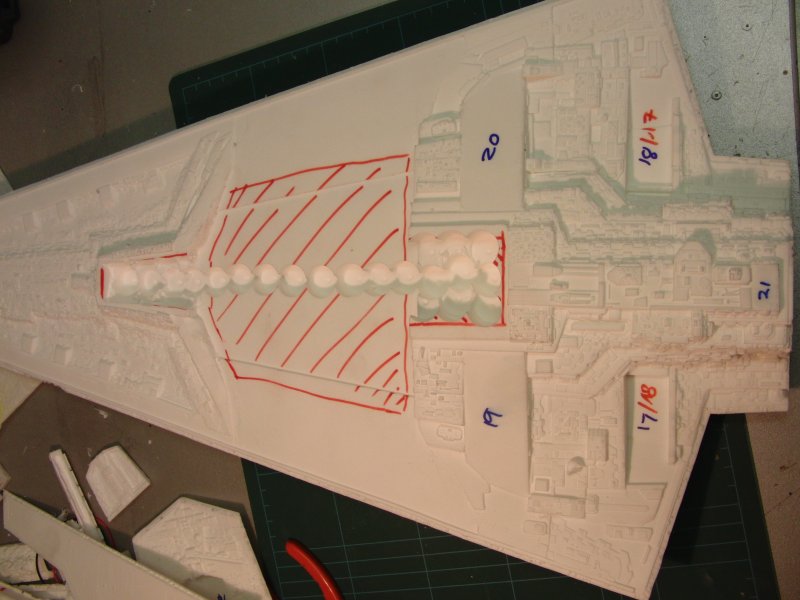 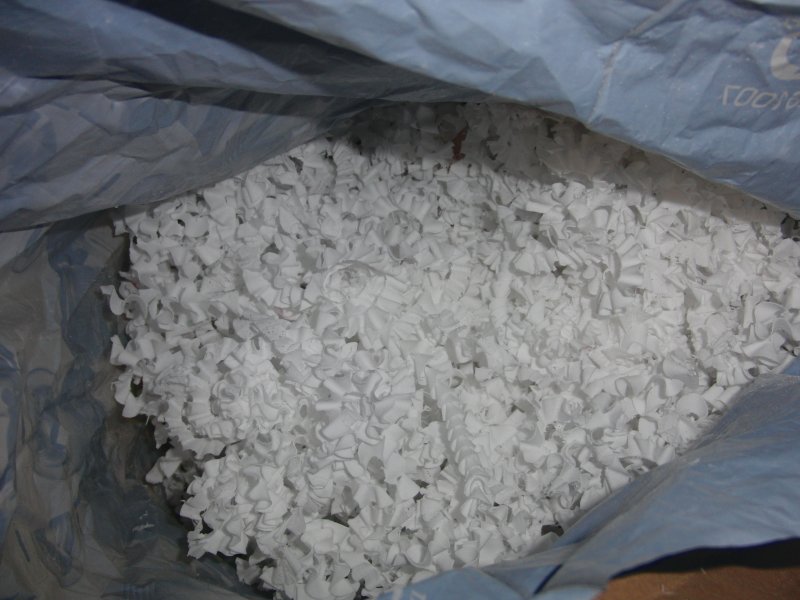 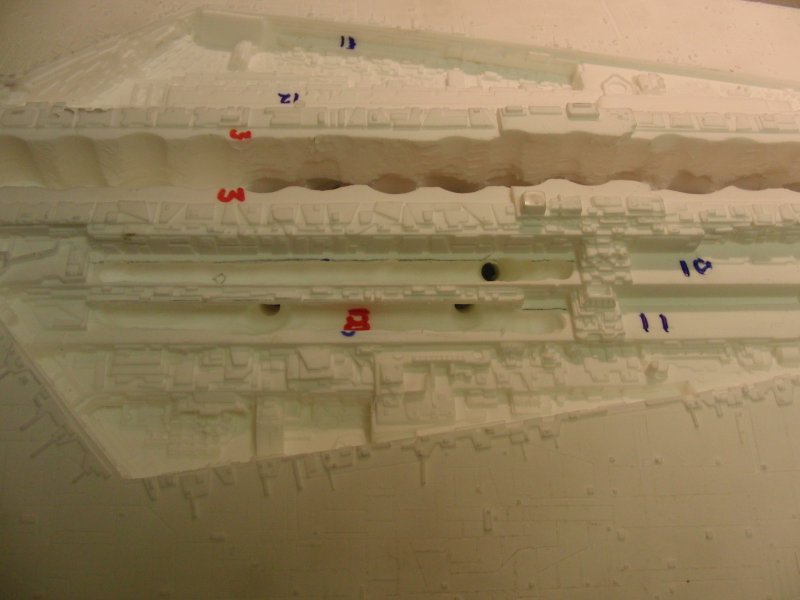 Here's my "special technique" for the bundling of the fiberstrands 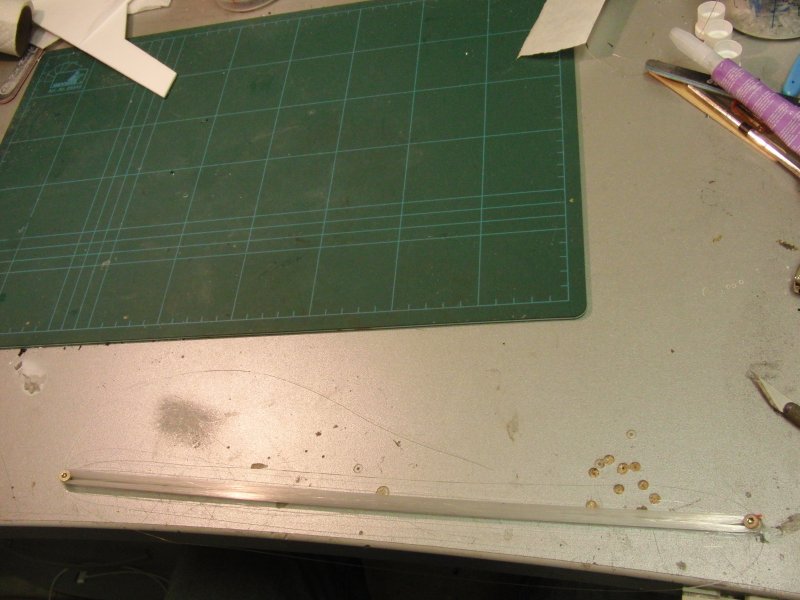 The fibers in one trench...

All fibers where bundled to strands of about 200 single pieces. Shrinktubing was then applied and after heating cut straight with a dremel cutting wheel. The LED was then placed in front of the fibers and fixed in position by wrapping it in self adhesive aluminum tape. Another layer of shrink tubing did the job then. 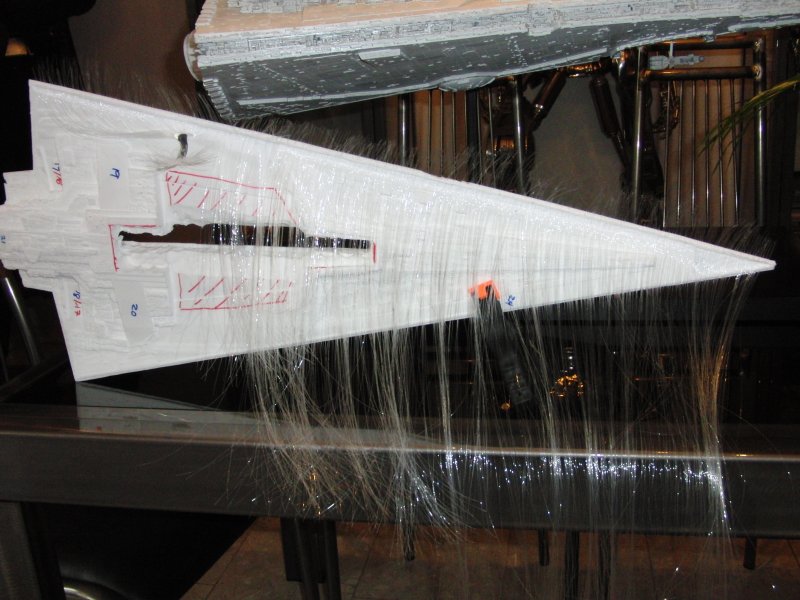 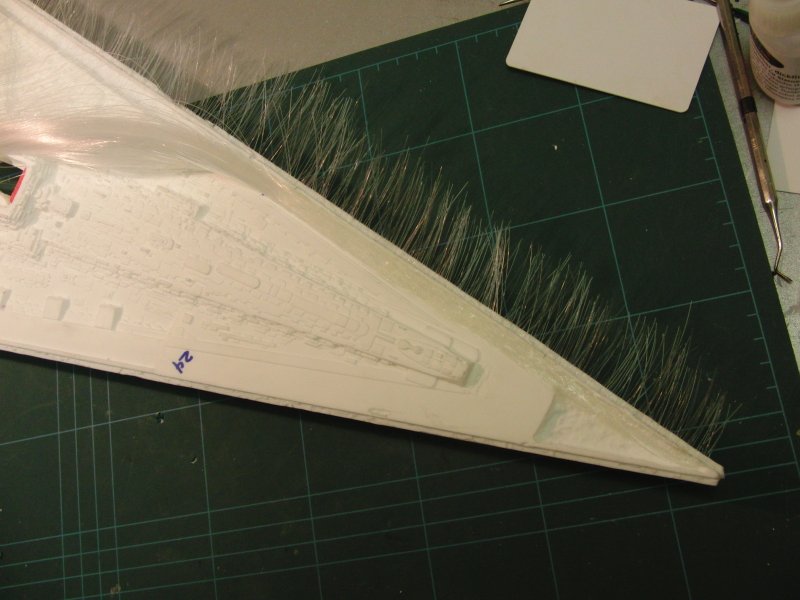 A few details had to be rebuild and rescribed. 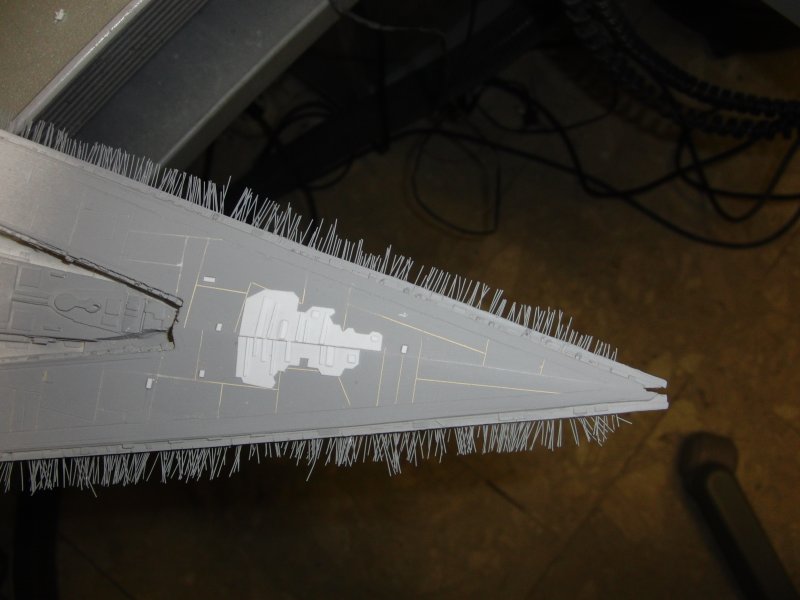 Here's the last building to be glued on. Notice the brass rod which will be used as a housing for the mounting rod. 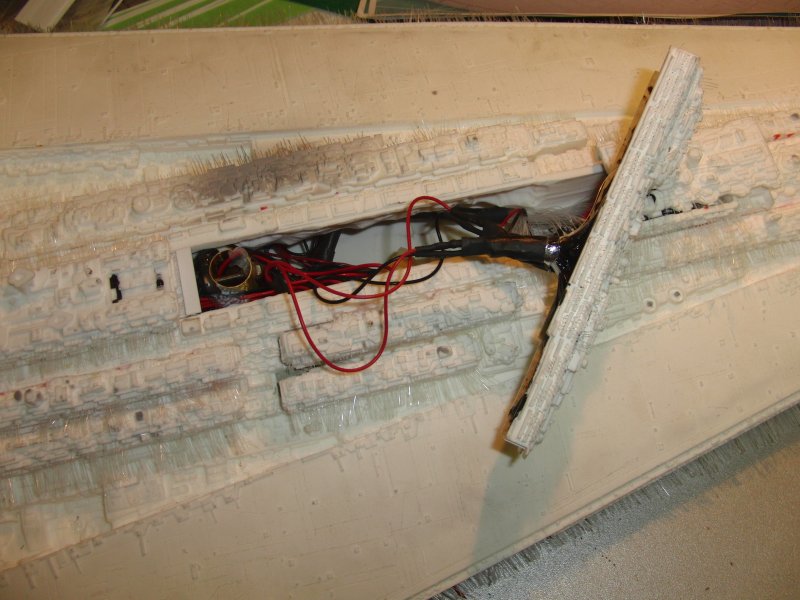 I added some more details to areas that looked not crowded enough. Small gaps and flaws were filled using wax putty (which IMHO is one of the greatest inventions for scale modelling). 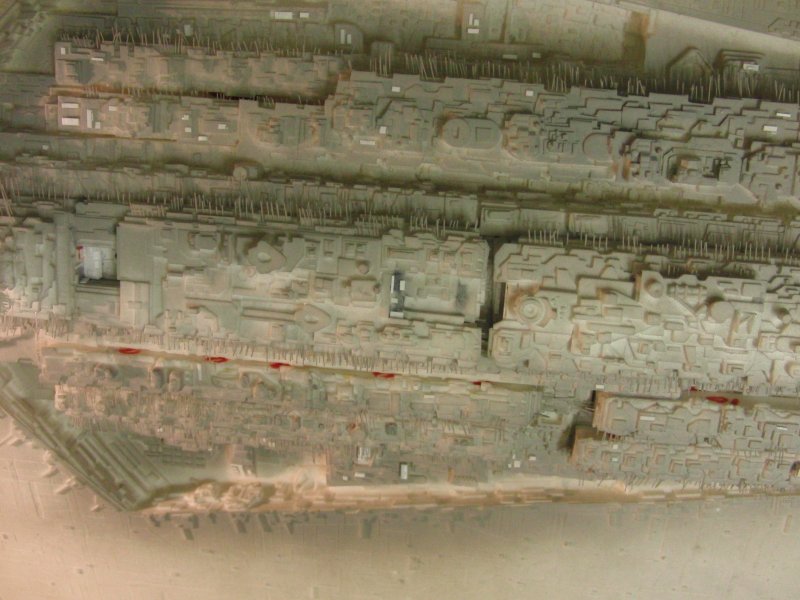 Here's the model prior to painting: 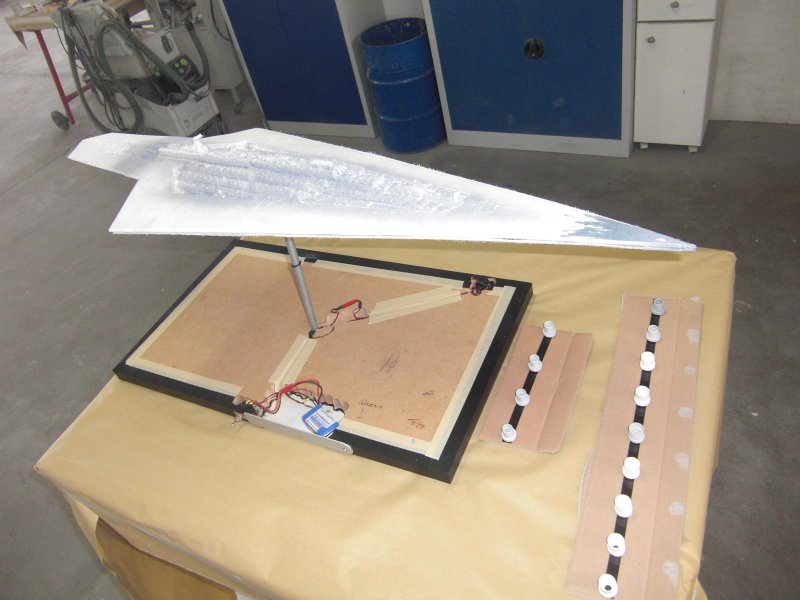 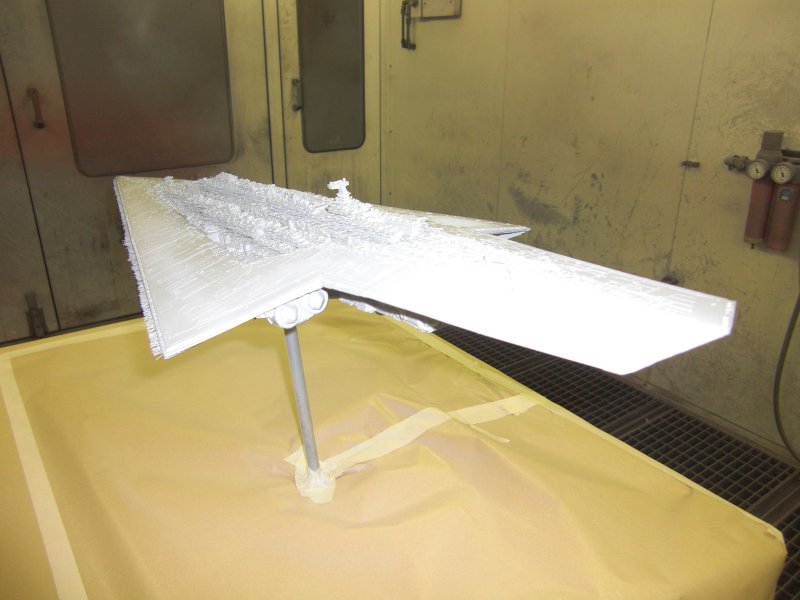 I used these tools to cut of the fibers after painting. I learned a lot building the Randy Cooper SD. Mostly a sharp #11 blade did the job. 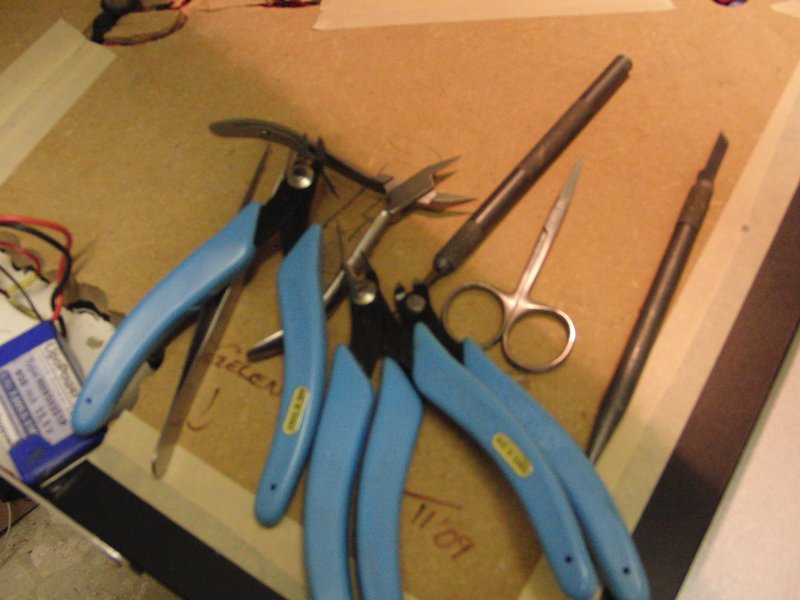 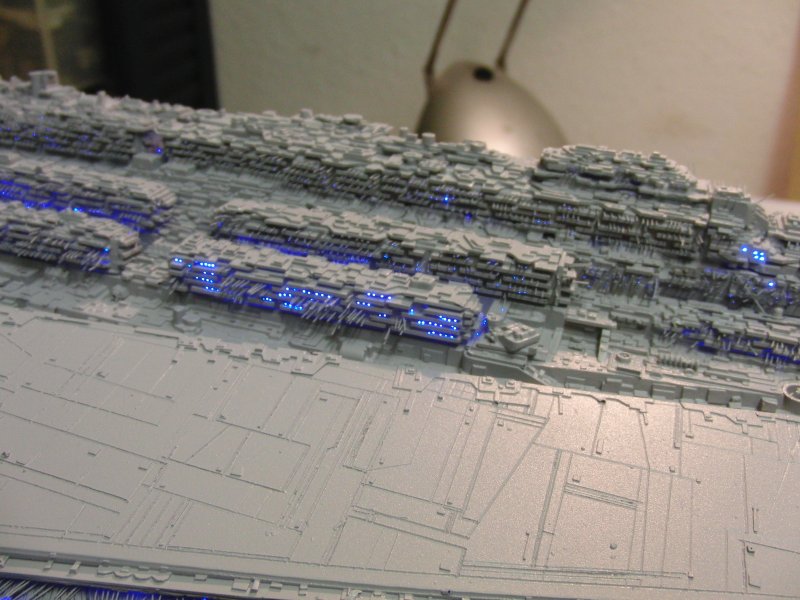 The finished model. So far I only airbrushed the buildings in a darker grey. In this scale, weathering gives me a headache. 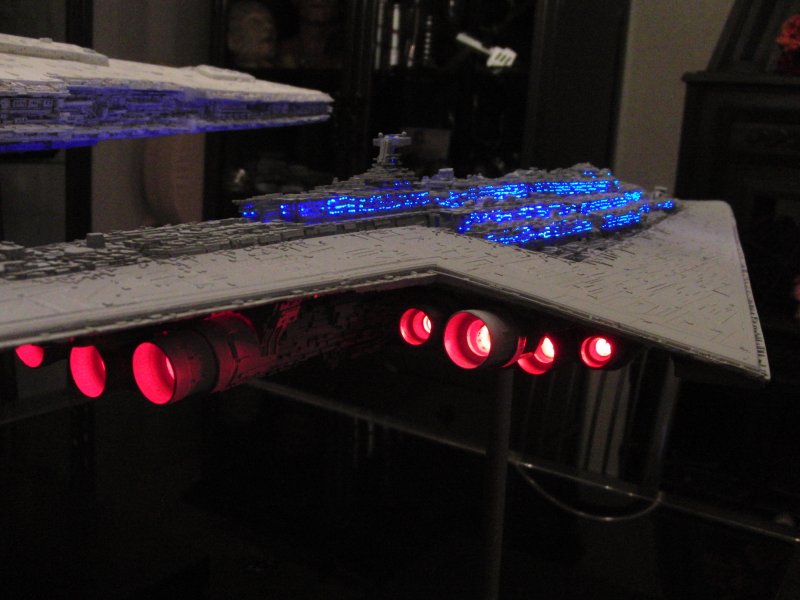 The kit next to the RC SD. 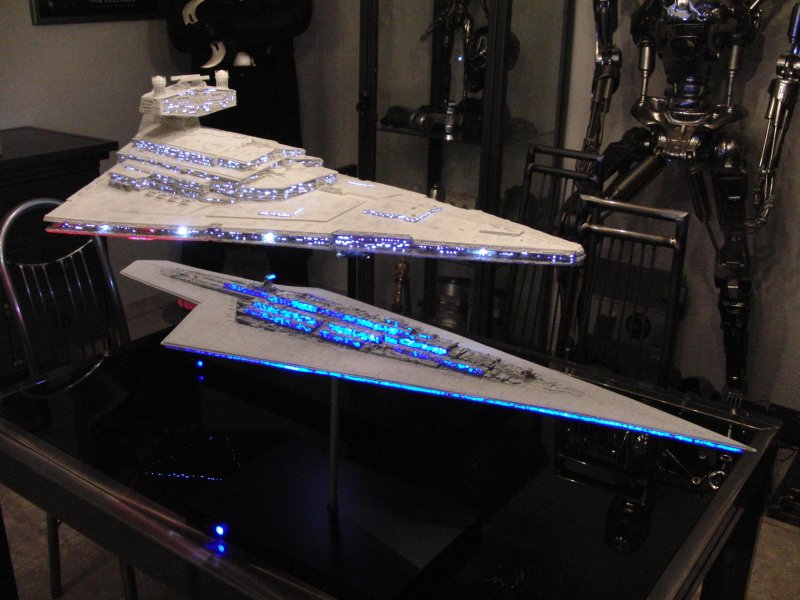 Sorry for the bad pics, but I'm not very good at photography. I'll try to take some better ones soon.

It took me 130 hours to complete this kit as you see it here. 5,761 holes where drilled for the fibers. Each fiber has a diameter of 0.25mm. I did not count how many meters of fibers I used but I had to reorder when I suddenly went dry The base features a blue LED for indication that the power is on. The 11.1V custom lipo pack can be decoupled. Base is made of MDF with an aluminum plate.

very nice. Liking this one alot.

This is very awesome Thomas, Ausgezeichnet!

I can still hear your words "I´m not interested in any Star Wars stuff anymore...", back when we first met. And look where you are now :eek

ATST, SD, SSD, RC ... where the hell will you display these great items?

You are a machiiiine :cool

RPF PREMIUM MEMBER
Because of being at a loss for words :

Gone but not forgotten.
:eek I never realized how big that kit is. Looks longer than the RC Destroyer! I hope to one day do the RCD. You have done a masterful job. Wax putty? I may have to check it out. What can it be thinned with?

Robiwon said:
Wax putty? I may have to check it out. What can it be thinned with?
Click to expand...

Here's a link to the Wax Putty unit:

Click on "Wax Puttying" on the left navigation bar.

There are about four differnent waxes, but I only use one. You can even use dental wax. I will make a small vid to show the proper use soon.

That looks awesome! Thanks for walking us through it too.

I'm curious as to what you used to cement the fiber optics in place.

Scott Graham said:
I'm curious as to what you used to cement the fiber optics in place.
Click to expand...

Cementing the FOs in not as simple as it seems. I used the recommended white glue for my first fibers, but when the stuff is dry, there is almost no grip and the fibers separated from the holes.

Hot glue is way to messy and if you are not carefull, you will melt the fibers:eek

In some places where there is no strong curving of the strands, I simply used super glue with zip kicker. It CAN make the fibers brittle, so you have to be carefull.

I mostly used 2K Epoxy applied with a gun:

The good thing is, you don't have to mix yourself. The (one way) tip will do the mixing. The bad thing is, each tip costs money and has to be discarded after glueing. But there's so much work involved with fiberoptics, I don't really care spending a few more bucks for a safe solution.

You are crazy! But dude you got skills :thumbsup

After the ISD II, the SSD is my favourite ship. This build is truly jawdropping!

Great work and I admire your patience!! I've STILL to finish my RCSD because drilling those holes drove me mad!!!! Long winter nights coming so I guess I will finish it sometime. They look beautiful when lit though!!! The engines look superb. Well done!

A task that I have not yet completed with my kits.

By the way, where did you get the fibers in Germany?

A task that I have not yet completed with my kits.

By the way, where did you get the fibers in Germany?

I ordrerd them in the US, but I have to look up the address as I am currently on vacation. Nobody in germany had .25mm fibers.

Seeing this makes want to get one to build, but I highly doubt I'd ever get around to completing it. :unsure