My hair was getting long and I had just watched season 2 of Umbrella Academy, so I decided to dress up as Klaus for Halloween. For a large part of season 2, Klaus wears jeans and a western shirt, should be an easy enough costume right? Haha, well, you'll see. 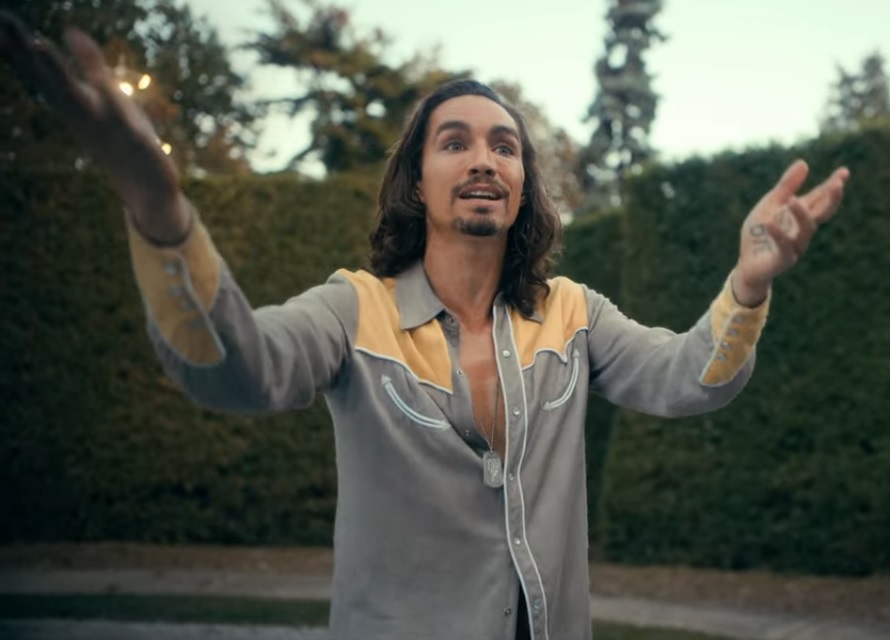 The Easy Parts
The nice part about this outfit for Klaus is that the long sleeves cover all his tattoos, so I could get away with just doing the Hello/Goodbye hand tattoos. Everyone has a pair of blue jeans and the Texas belt buckle is widely available on Amazon and Aliexpress. It is also easy to purchase a custom pair of dog tags, but I thought it would be more fun to hand stamp a set myself. 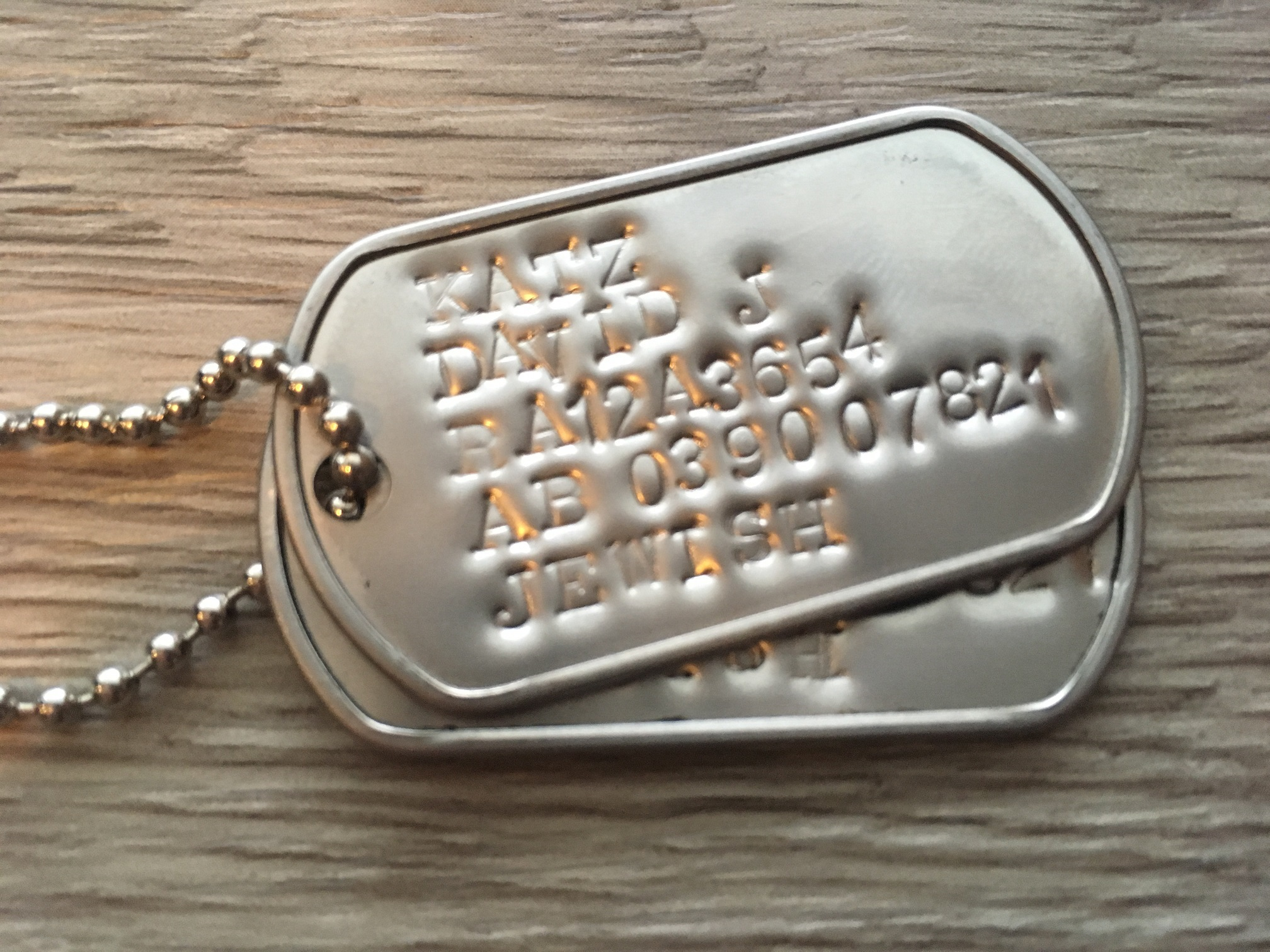 The Shirt
That just left the western shirt. I searched online for days trying to find the exact shirt, but the only things I found were a sketchy website and a similar shirt in different colors for a few hundred dollars. I reached out to the costume designer for the show, who was kind enough to help me. They acquired one vintage shirt and then constructed additional shirts by dying similar fabric to make shirts for the stunt doubles. This was what set me down the path of finding similar material and dying it.

Finding a shirt with the same material wasn't very hard, but finding one with pearl snaps and identical yokes was. I am not a seamster, so I didn't want to sew yokes onto a shirt without them. Sacrificing accuracy, the shirt below was acquired from a thrift shop. It had pearl snaps and existing yokes that would suffice for a Halloween costume. 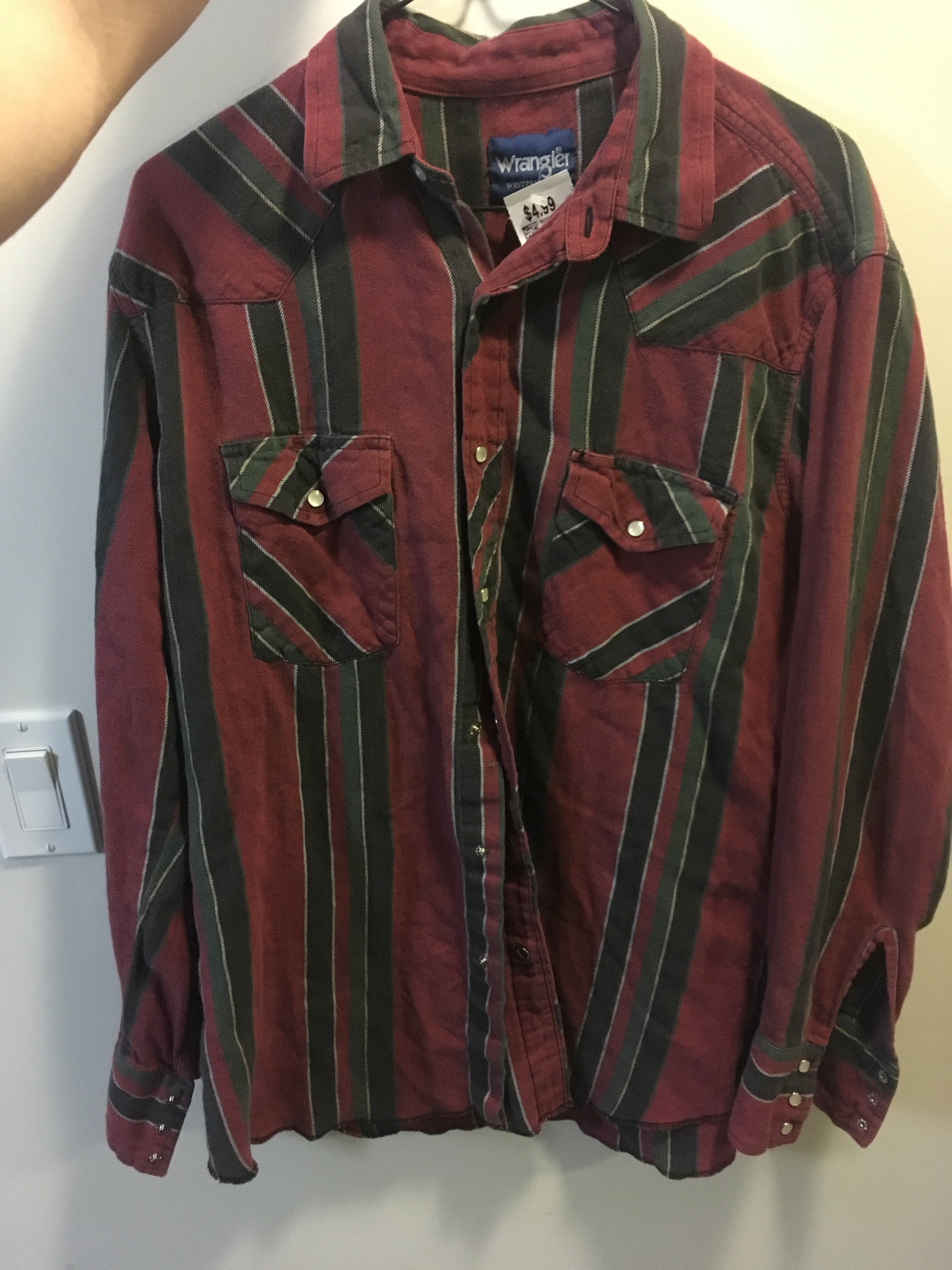 Dying the Shirt
The first step was to remove the existing color. Some research suggested color remover should work on my fabric and not damage fibers. It did not. If anything, the little purple it did pull from the shirt just dyed the white stripe more. Ignoring online advice, I decided to bleach the shirt. This worked great, it started removing color almost immediately. After soaking longer, the shirt was striped white and pink. Hoping to remove more of the pink, I let the shirt soak even longer. That's when the shirt started to melt. It became so fragile it would deteriorate in your hands. 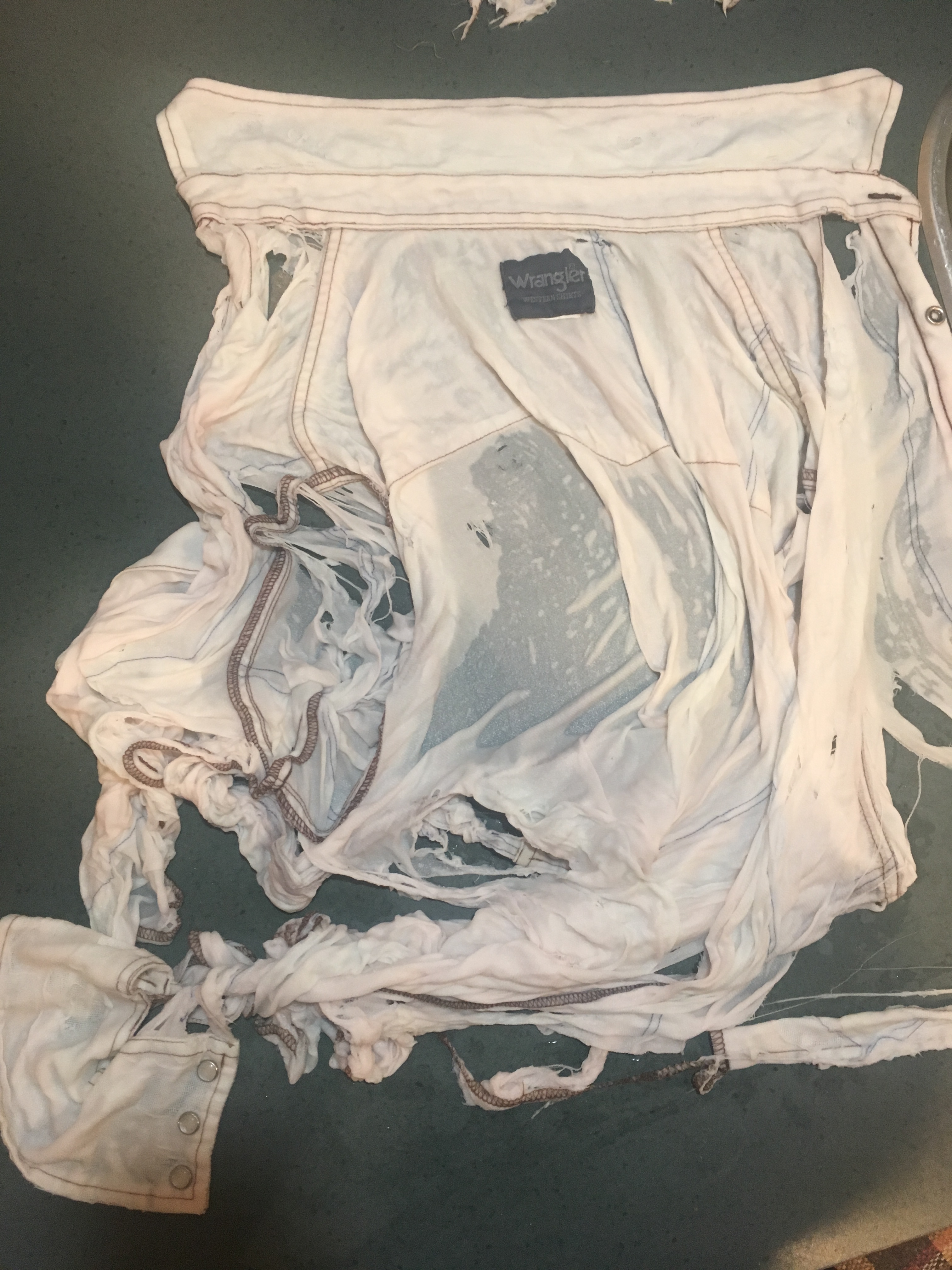 Back to one, no shirt. Thrifting a shirt was limiting my options, I was gonna have to bite the bullet and buy a new shirt online. Luckily, Wrangler makes the same western shirt in white. The only problem being that it is a polyester blend, so the texture would not be as accurate. To make matters worse, I had already bought natural fabric dye. Michaels didn't have a single bottle of dye due to some TikTok trend, so I had to get them from a specialty fabric store with a final sale policy. I didn't have a choice, I was gonna have to make it work. I dyed a test patch and it seemed to take the dye well enough. The shirt however was more fabric, so it wasn't as easy. It took 3 rounds of dying to get the shirt to be grey enough. 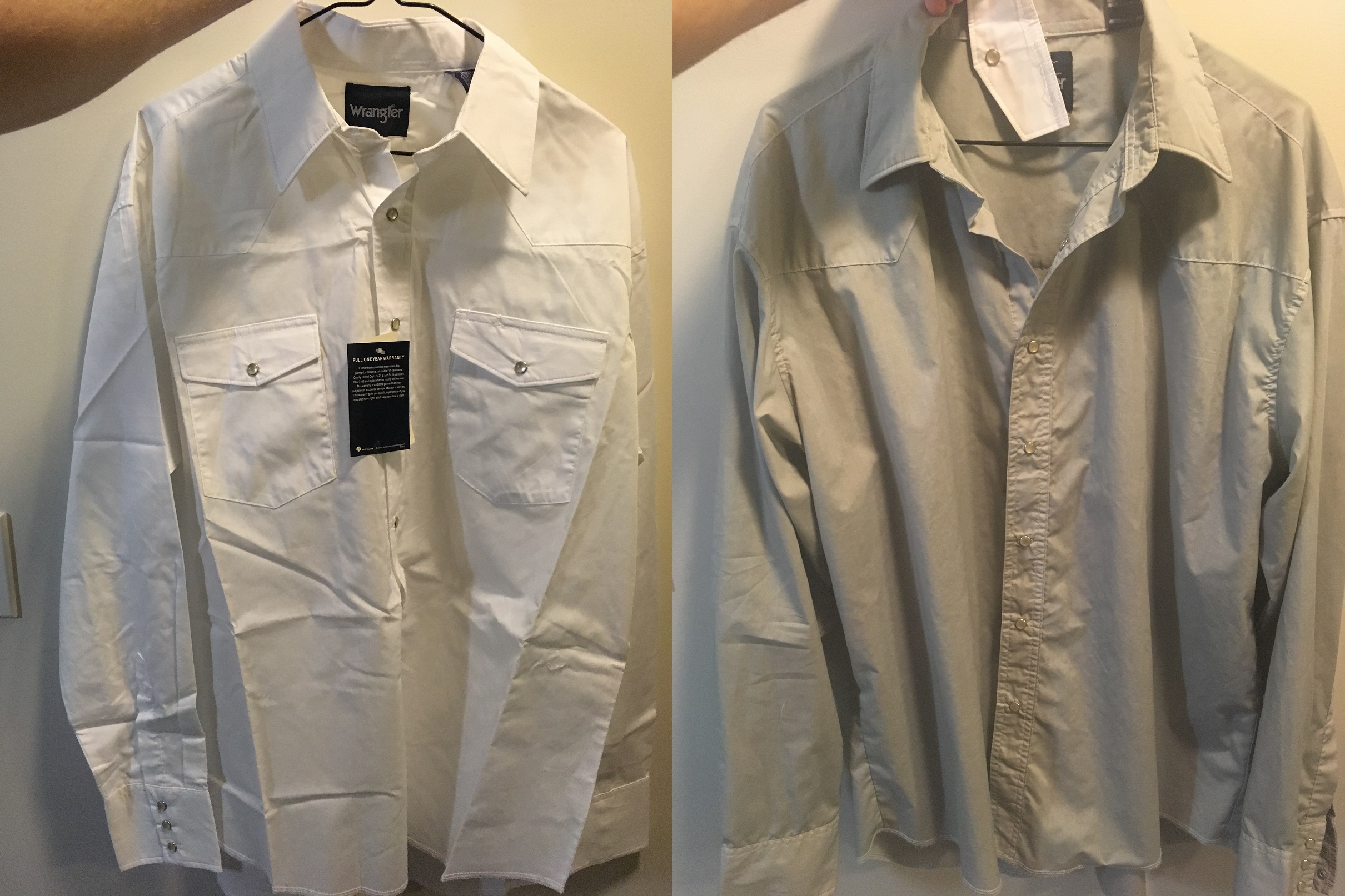 The Details
Now to add all the piping, color the yokes, and make pockets. Since I was not sewing on yokes, I could not dye them separately or sew on the piping properly. Instead, I had my Aunt sew soutache on the yoke seams and piping filler around the cuffs. Screen accuracy was out the window at this point, so instead of copying the shape for the cuff, I had the piping follow the cut of the shirt. Then I used fabric paint on the necessary areas, which turned out far more yellow then anticipated. In retrospect, it would have been easier to separately dye yokes to ensure the right color and also be able to properly attach piping. 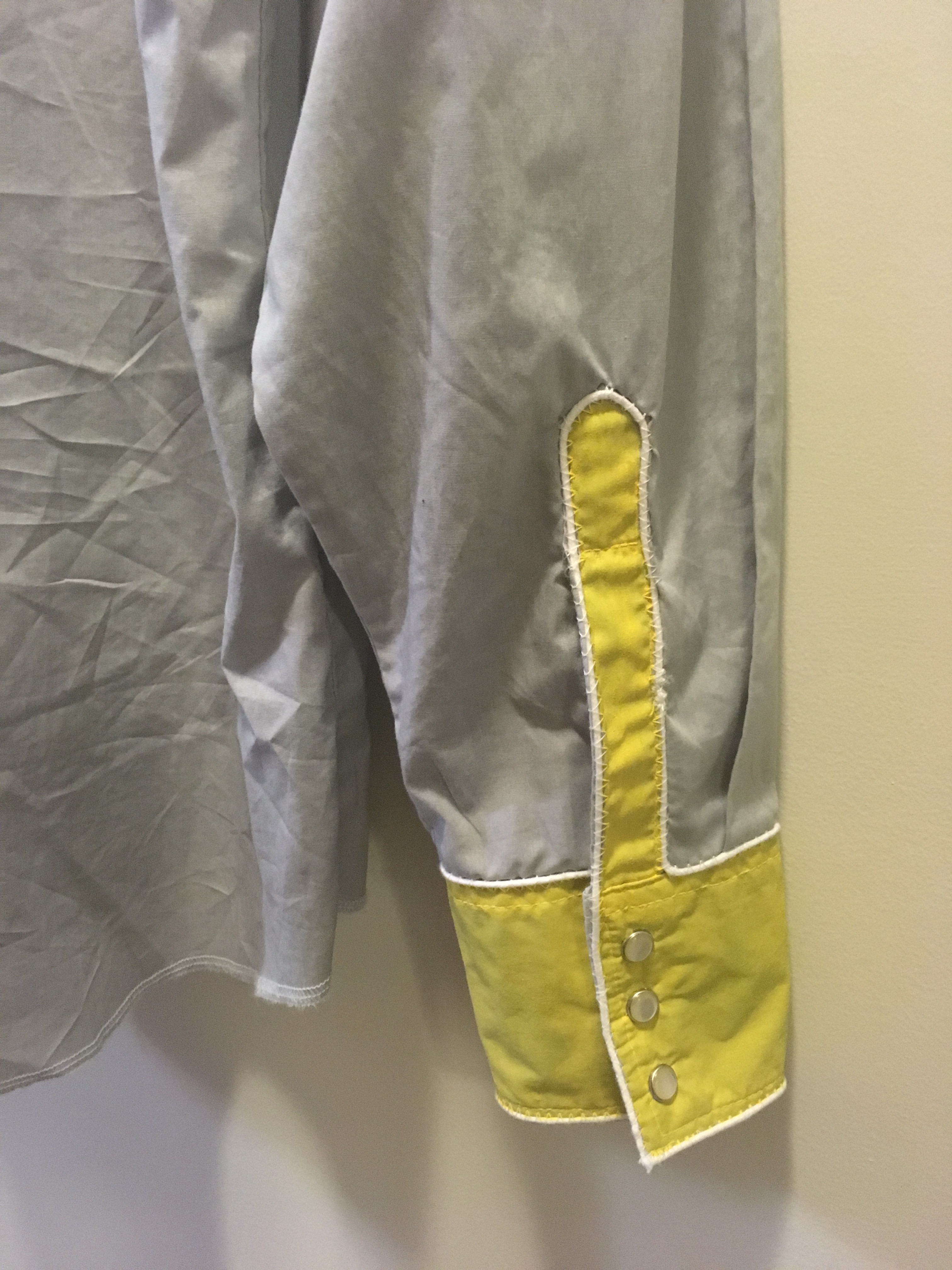 The pockets on the original shirt were standard shaped pockets with a snapped flap. To create the smile pockets, I removed the original pockets and used some of that material and extra soutache to achieve a fake pocket look. The soutache made the opening and using the pocket backing and fabric, I hand-stitched some triangles for sewing to the ends. I didn't quite get the right curvature and because of the different yoke shape, it didn't look right to rotate them as much as they are in the show. 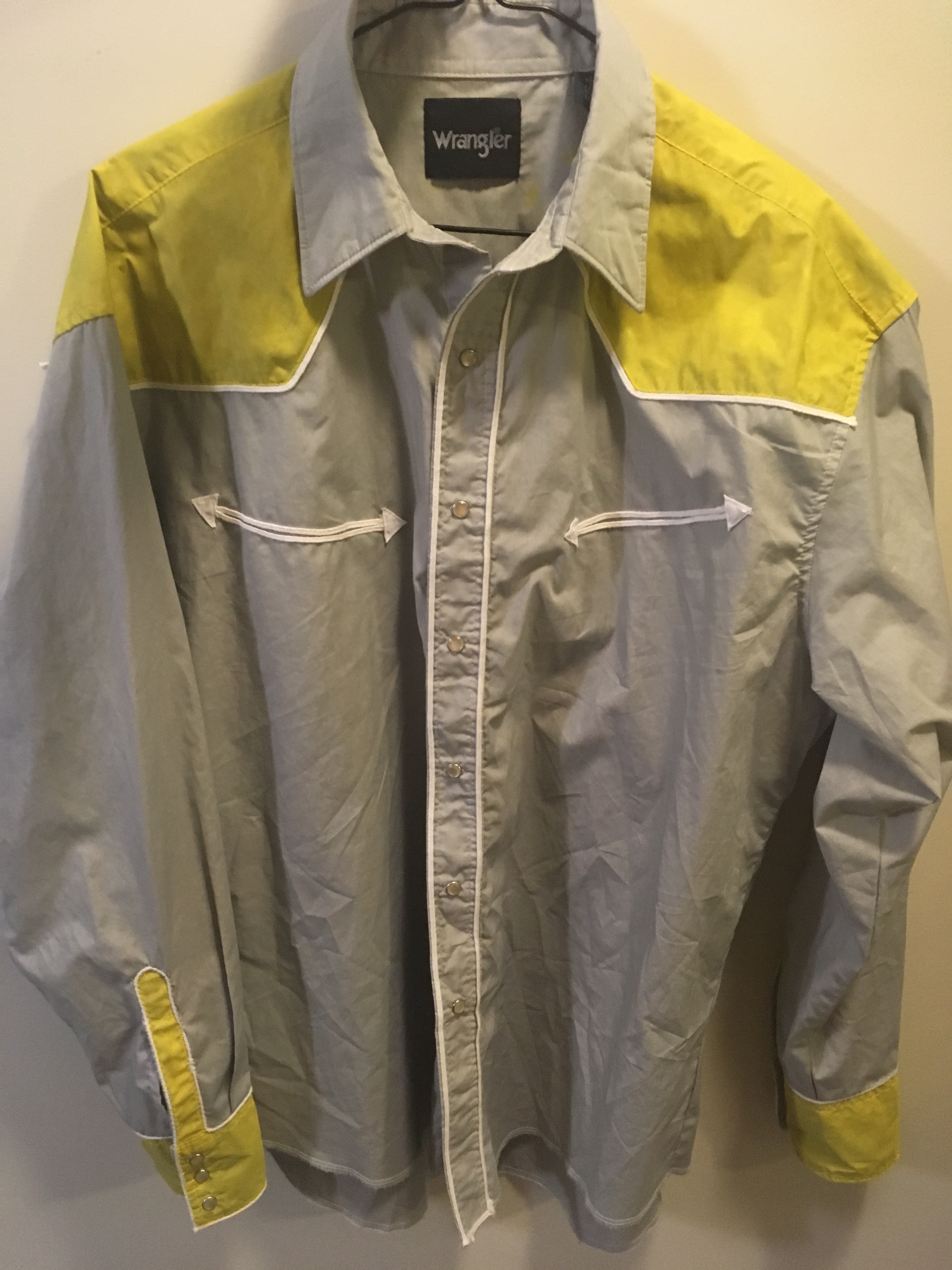 There are a few things I would have done differently or better, but this was a fun project that turned out alright for my first time customizing a shirt.

Varok Saurfang (My hubris finally got the better of me)