RPF PREMIUM MEMBER
Sometimes you have too many different versions of one prop. In my case the JP Hammond Cane is one of these props ;-). I owned quite a few of them, sold some, and kept 4 of them. But recently I bouhg another one on eBay (more info later in this post) and thought it would be nice to have an overview about the 5 canes I have now, and give some more info. Might be useful for people looking for a good replica!

What's not included in this review is the Chronicle Collectibkes cane, because... Well, I don't like the look of it at all...

So, the first canes I bought were made by Rylo. Back in the days, Rylo was the only one making a decent cane. The cane itself was made out of turned wood, with a nice amber topper with a crane fly trapped inside. Great looking canes. I especially like the fact that the canes themselves are wood. Much more durable than resin!

Later, Prop-Builder also offered canes. His canes were resin around a metal rod. I little bit shorter than Rylo's canes, with smaller amber toppers. Instead of crane flies, there were real mosquito's in there. Although the movies mentions mosquito's, in the close-up of Hammond's topper, the bug looks more like a crane fly than a mosquite.

After that, Rylo finished some left-over canes he still had in his ship, using (if I'm not mistaken) toppers that were created by Prop-Builder. So also wooden canes, with mosquito toppers this time. If I remember correctly, after that Rylo also offered some resin canes or cane kits.

I always liked bot Rylo's canes and Prop-Builder's canes, althoug the finishing on Prop-Builder's cane seemed a bit too yellow-ish to my tast. A few weeks ago, I saw a cane pop up on eBay that turned out to be a Prop-Builder cane, but the seller sanded the finish down, added some details to the sculpt and repainted it. Turned out the seller was RPF member davidJurassic. I really liked that finish (didn't know it was a Prop-Builder cane in the beginning) and placed a bid. Well, a sniper bid in the last 5 seconds. Yeah, I'm one of these guys.

Now for the interesting part: comparison pictures. Here we have, from top to bottom: 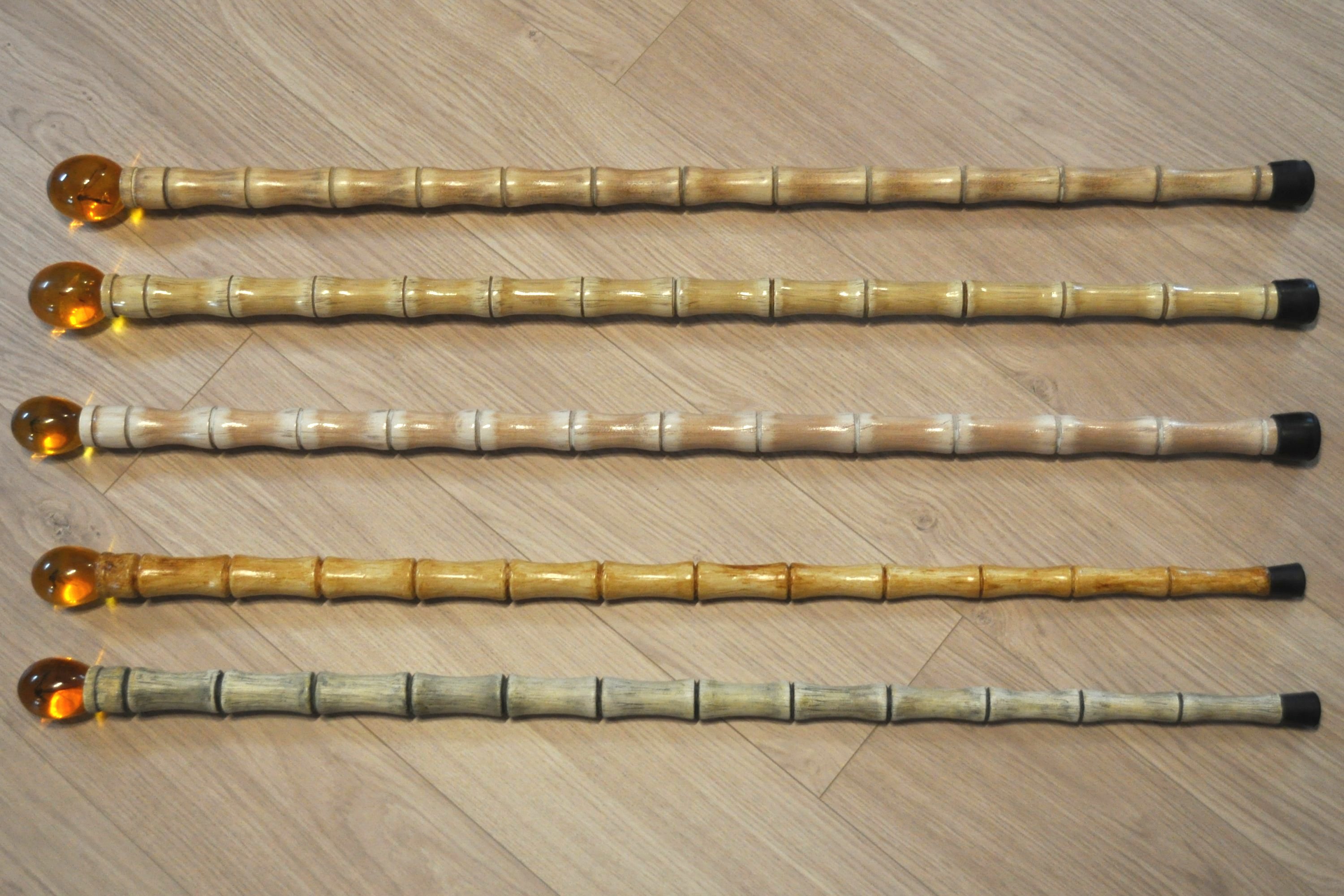 Some more pictures of all canes: 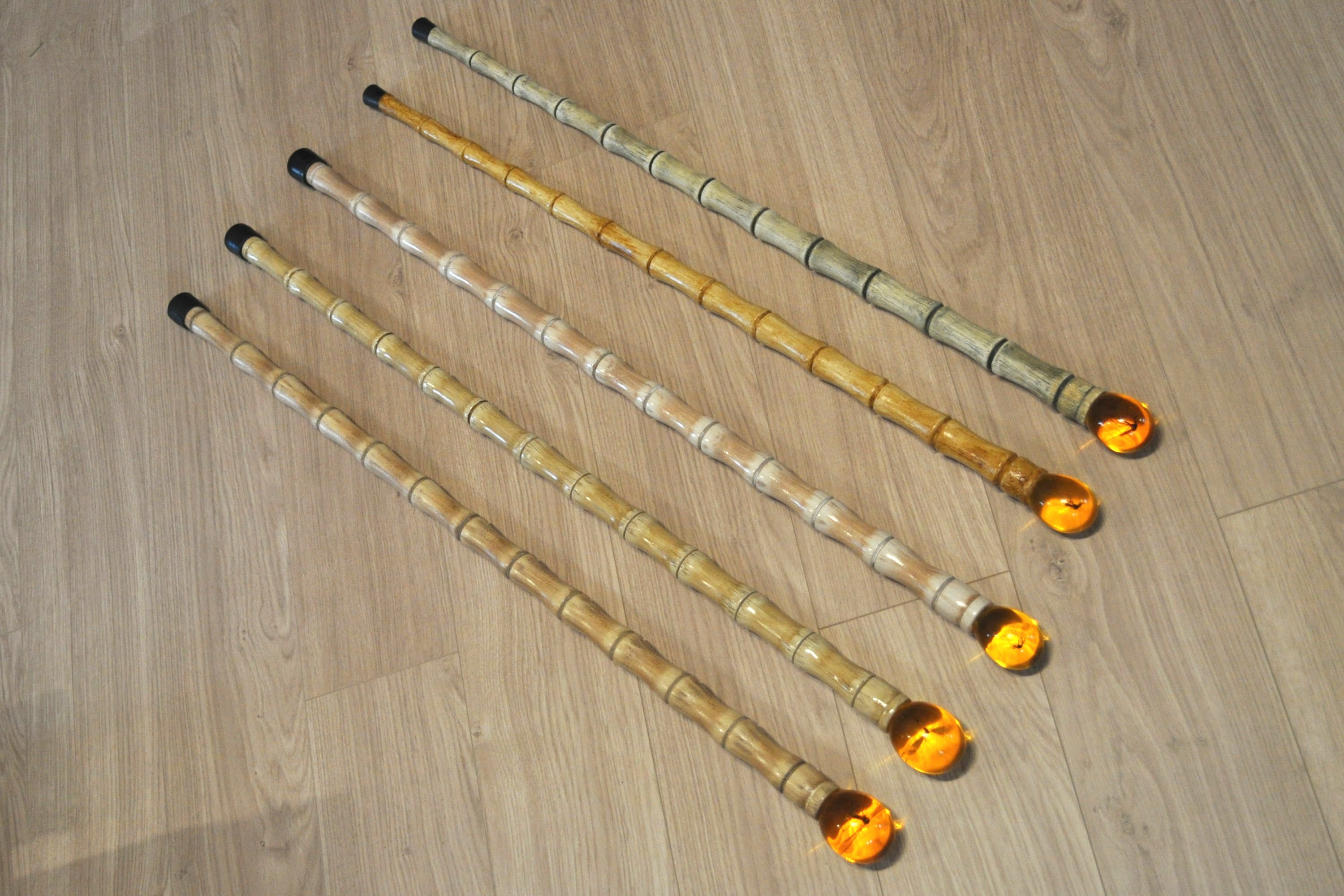 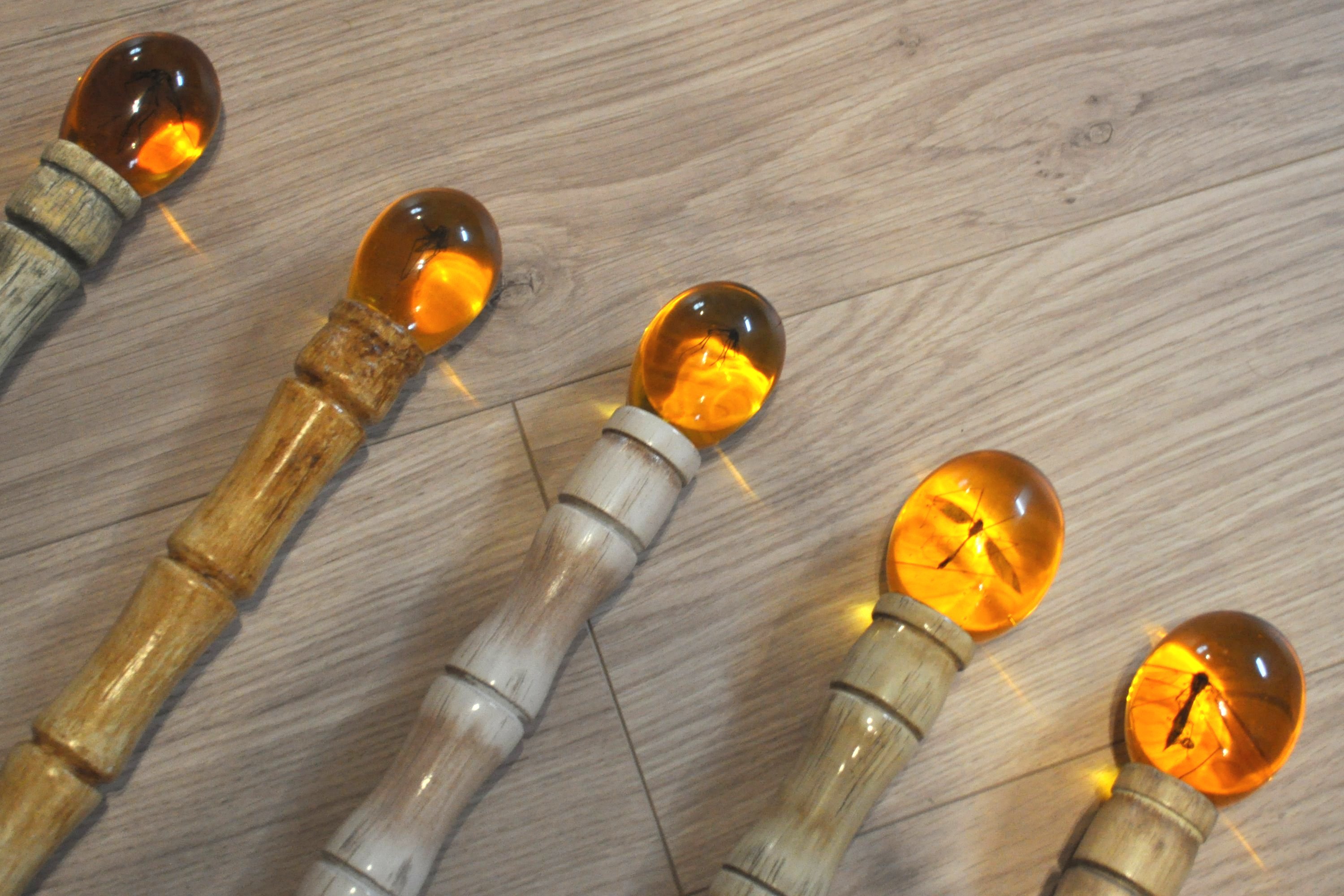 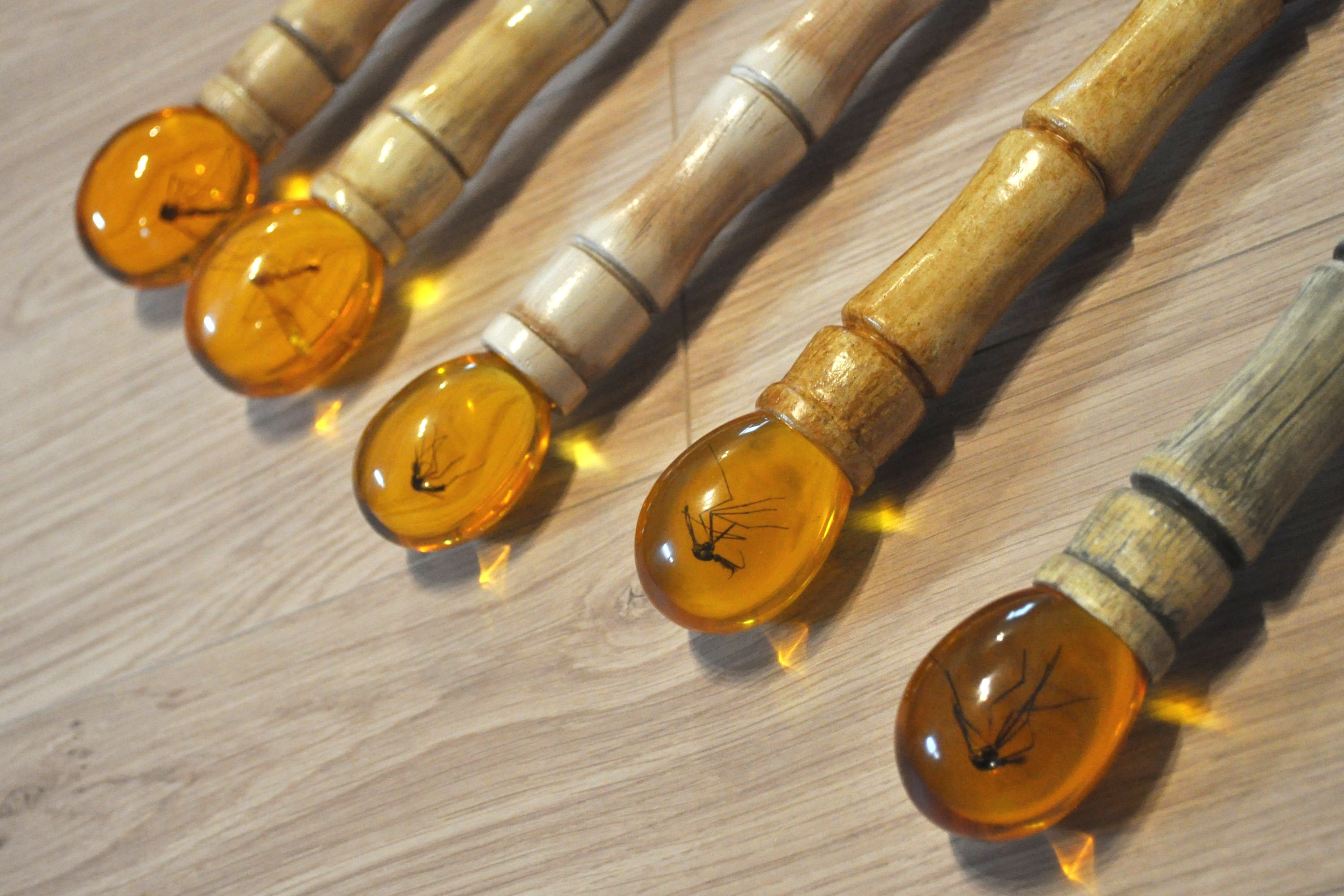 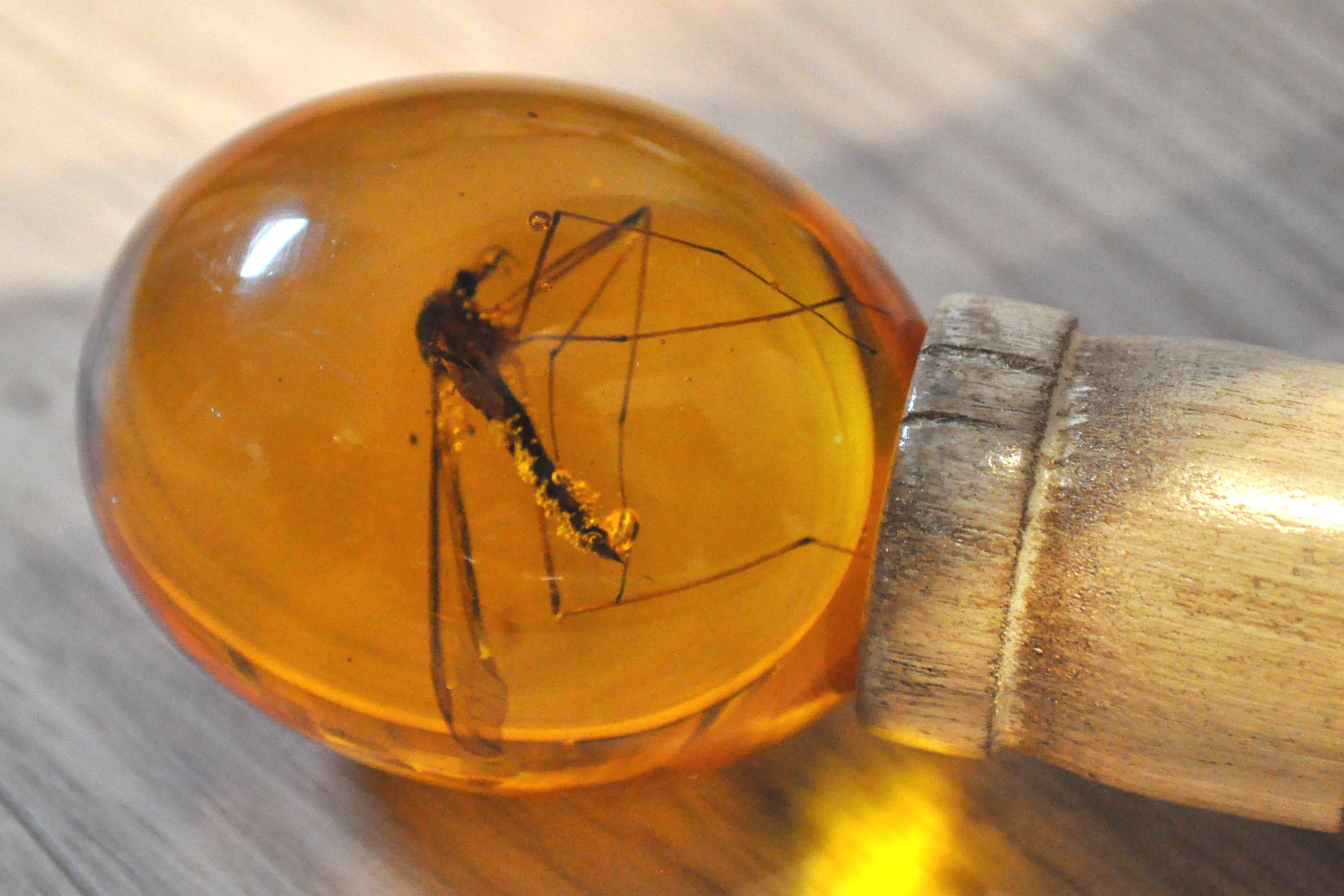 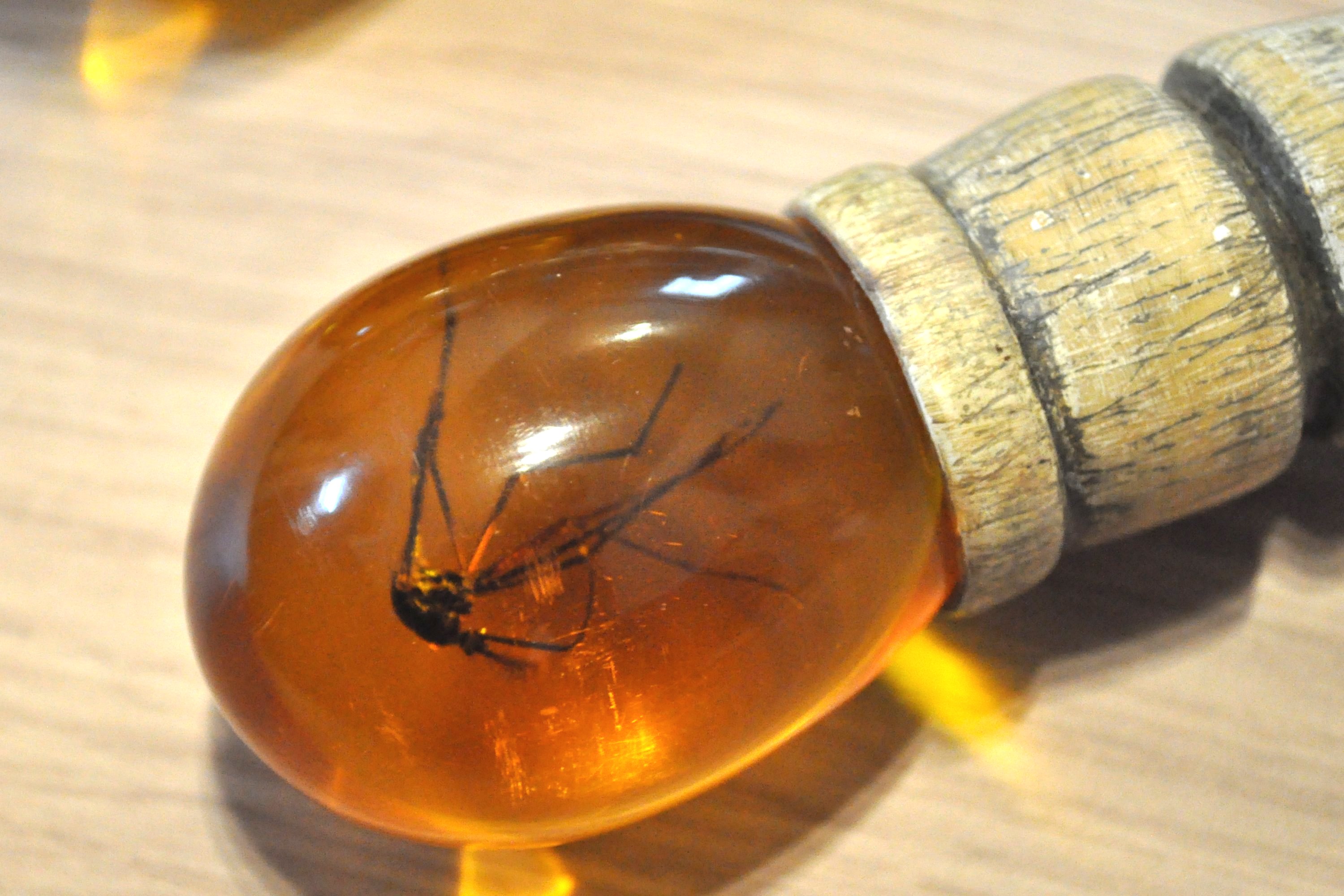 And some comparison pics between Prop-Builder's original cane (bottom one) and the refinished one by davidJurassic (top one): 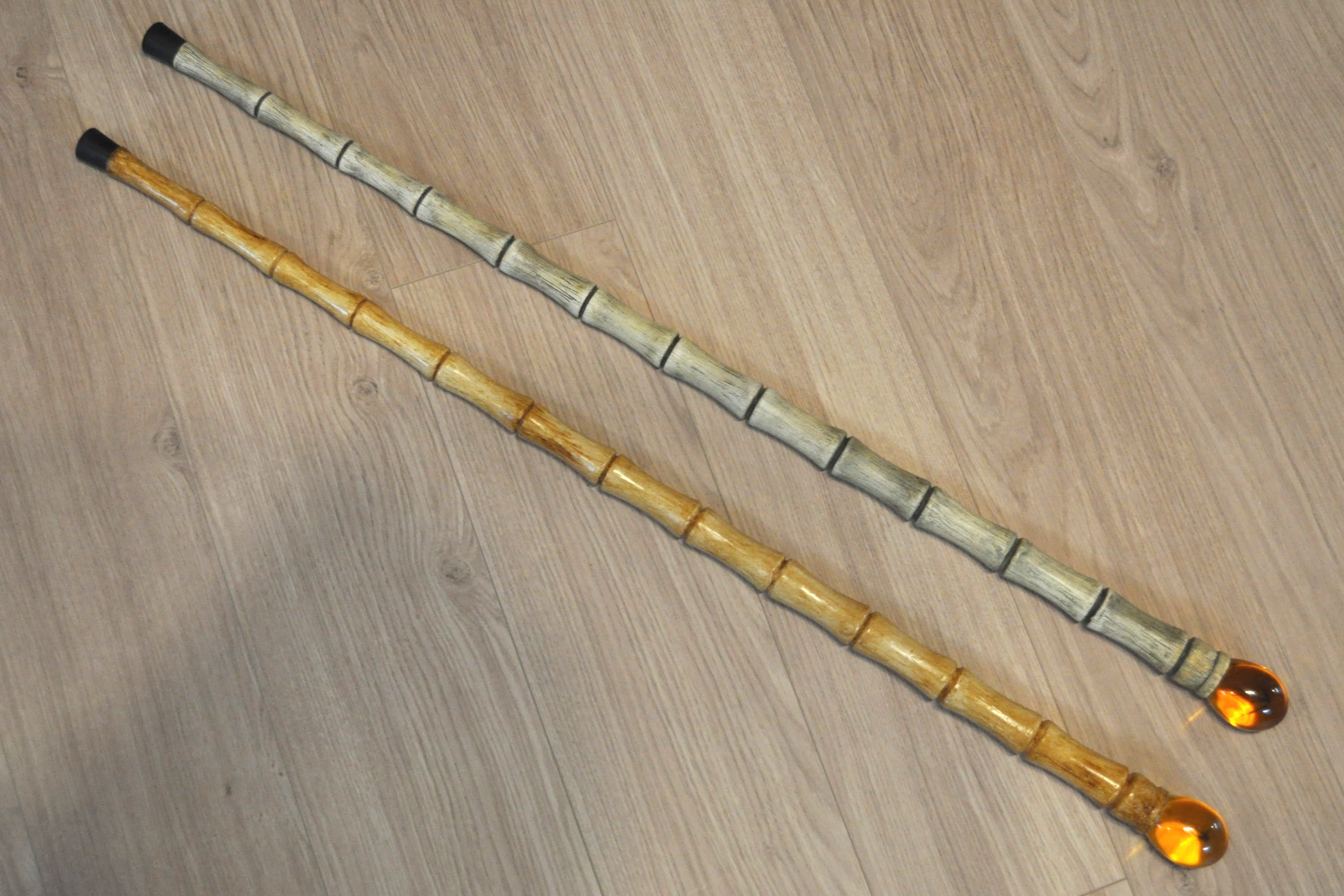 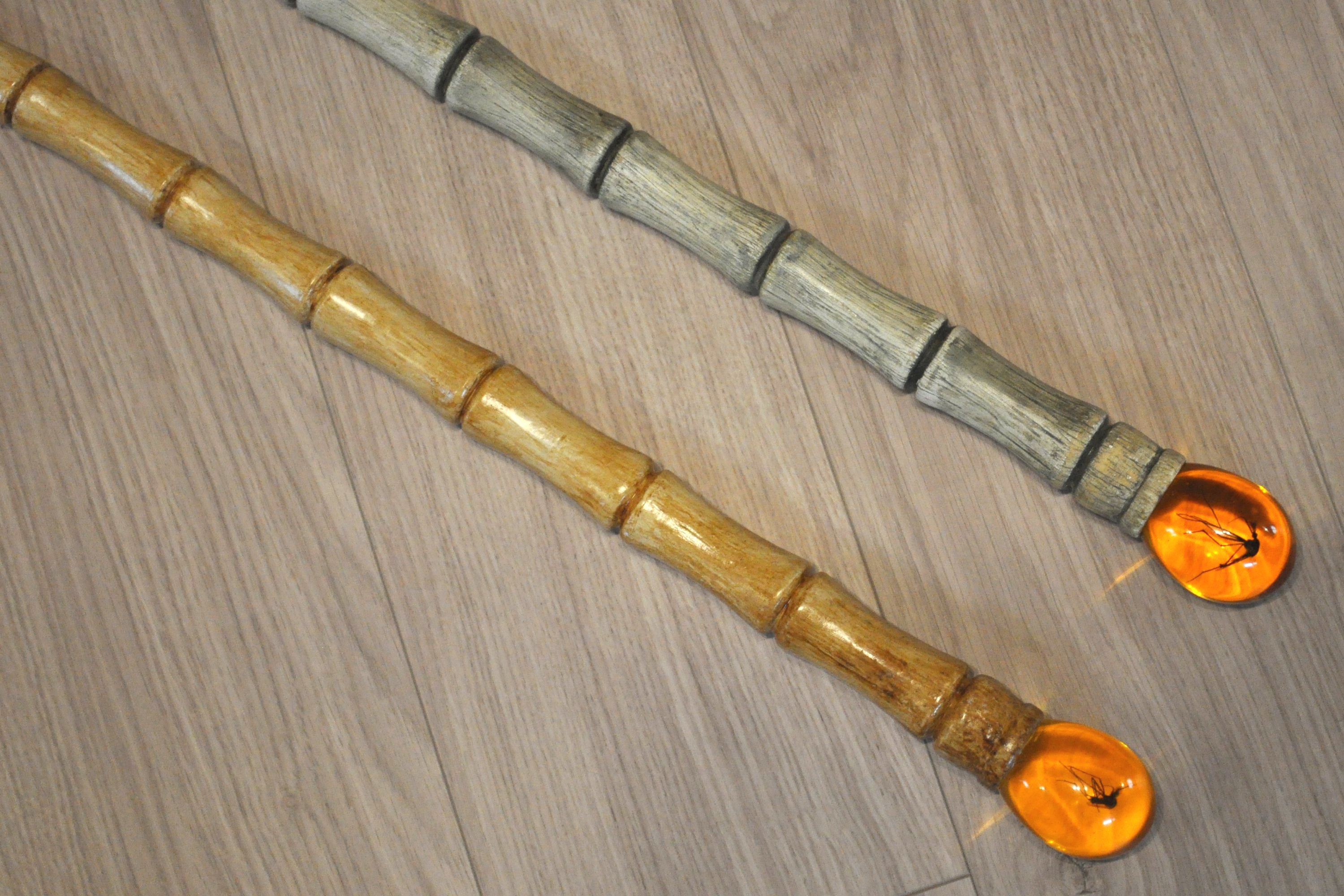 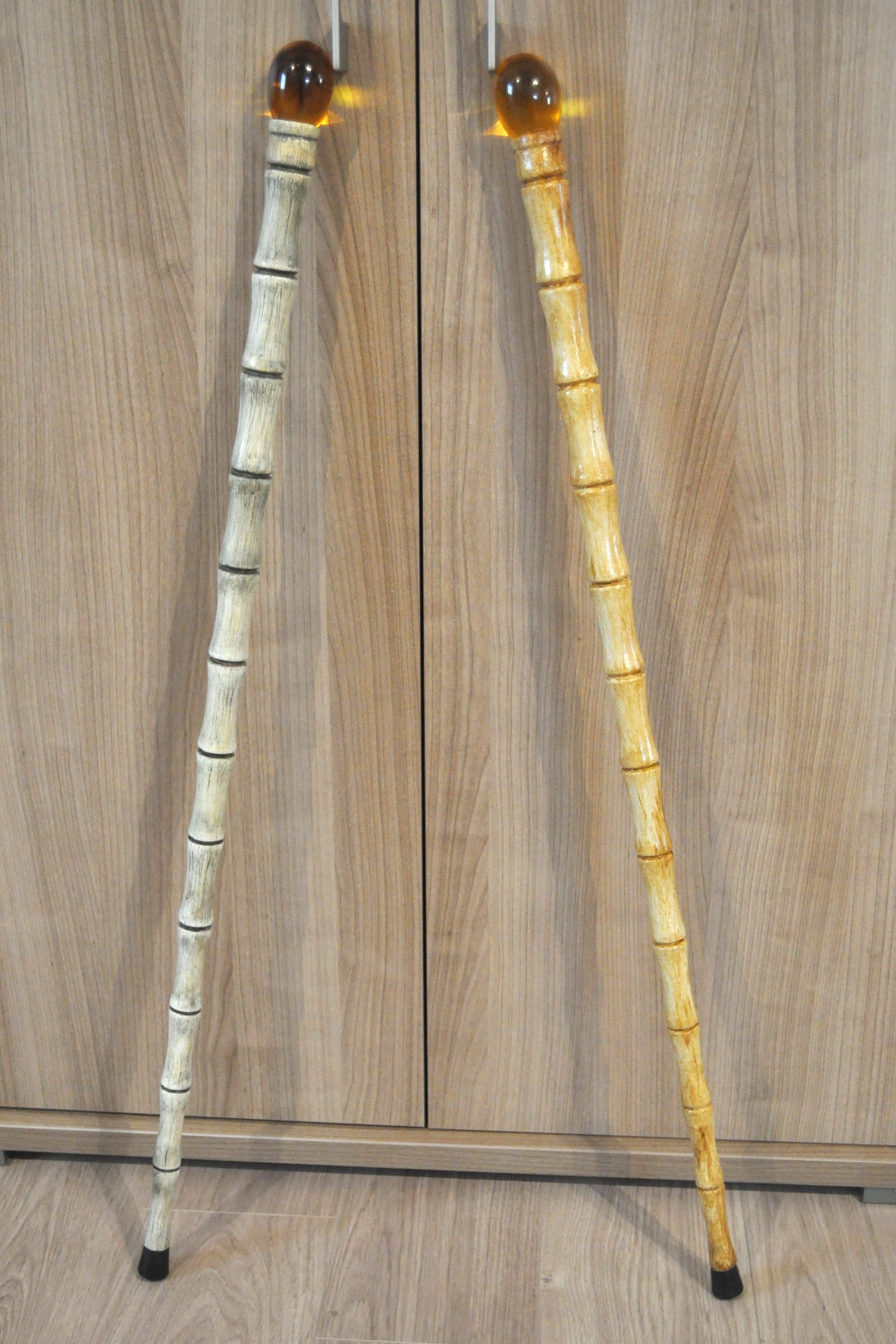 Last topic: pricing! I've seen Rylo canes (the "first generation" in wood with crane fly) being sold the last few years for prices around €400. I bought mine for half of that price, but that was 8 years ago. These are rather rare, I guess. They don't pop up for sale very often. I don't think Rylo is still offering them. He once mentioned that these were a pain in the *ss to finish and he would just finish the canes he still had and then would stop producing these. So getting one from Rylo himself will not be a possibility, I think.

As for Prop-Builders cane: I payed around €250 for it, but prices went down after that. There was a period that Prop-Builder was not delivering to RPF-members who paid for some Jurassic Park replica's. As far as I know things were resolved back then.

For te refinished cane: I bought it on eBay and took a bit of a risk by not using the buy it now option, but just placing a bid in the last seconds. I saved some euro's, this way, because the final selling price was lower than the buy it now price. Ended up paying about €195 for that cane (shipping from the UK to Belgium included).

Feel free to post pictures of other canes in this thread! Preferably canes that are out there for sale! I've noticed that there are fan-made canes on eBay that don't look too bad.
Last edited: Dec 10, 2020

RPF PREMIUM MEMBER
awol007 Still makes these if I am not mistaken.

I have one of his as well as one of Rylos

Apollo said:
awol007 Still makes these if I am not mistaken.

I have one of his as well as one of Rylos
Click to expand...

If you can post some good pictures of awol007's cane, that would be great.

RPF PREMIUM MEMBER
I thought Prop-Builder did end up getting banned, but I could be misremembering. I got an amber mine chunk from him that I love though, so he definitely made a good product. I got my cane from Luke0312, I'll have to get some pics of it.

RPF PREMIUM MEMBER
This is great info! Thanks for posting. I’ve wanted one of these for years. Never picked up one of Rylo’s but had many chances too. Which one do you think is most screen accurate? I think I like the look of the refinished cane best!

Nice comp. Interesting seeing the various sizes and shapes of the amber spheres. Some of them look huge relative to the shaft.

LTsmash1200 said:
I thought Prop-Builder did end up getting banned, but I could be misremembering. I got an amber mine chunk from him that I love though, so he definitely made a good product. I got my cane from Luke0312, I'll have to get some pics of it.
Click to expand...

Yep, seems like het got banned. In this thread https://www.therpf.com/forums/threads/what-does-prop-builder-owe-you.134482 he solved all the pending issues, but probably things went wrong after that again (didn't follow up on the guy after that). Too bad, because his props were not bad at all. But as always: only delivering quality is not good enough. You actually have to deliver and communicate. Too bad...

How much is one of these if sold?

darthwhitey said:
This is great info! Thanks for posting. I’ve wanted one of these for years. Never picked up one of Rylo’s but had many chances too. Which one do you think is most screen accurate? I think I like the look of the refinished cane best!
Click to expand...

My favorites are (in the top picture) the top (Rylo) one and the bottom one. There's quite a color difference when you see both canes in one picture, and I guess the screen used tone should be somewhere in between.

Rylo's fist toppers indeed are a bit too big, but on the other hand I think Prop-Builders toppers are a tiny bit too small. Somewhere in between should be great. And with crane flies, not mosquito's. In the screen used cane, the wings of the bug are clearly visible, and I think you can only get that with a crane fly inside.

So if someone could make a cane with a tone in between top and bottom cane (prererably in wood) and with a topper that's sizewise in between (with a crane fly inside), that would be the perfect replica.

As for the size of the cane: I have no clue how big the screen used one is, to be honest. Rylo's canes are a bit bigger than Prop-Builders ones, but I don't know what size is correct.

Oh, and last detail that's not on any of my canes: the screenused one has a somewhat flatter side on the topper. As far as I know that's a detail that Chronicle Collectibles actually included in their replica...

Lissavi said:
How much is one of these if sold?
Click to expand...

Mine are not for sale, to be clear. It's quite a while since I saw a Rylo cane for sale. I think if one pops up, price will be between €250 and €350? As mentioned in the first post: I snapped up the refinished Prop-Builder cane for about €195, but that might have been a lucky shot. I'd also think these canes would go for about €200?

There's a seller on eBay (aewnet) who sells good-looking canes for $130. The cane he's selling has 13 segments (little top one not counted), but you can contact him to ask for a 12 segment one (accurate to the movie cane), which will be a little smaller, but more screen accurate. I'm considering getting one from him too, since also his toppers look quite nice (with a crane fly and a somewhat flattened side too).

If someone actually has one of this eBay seller (don't know if he's a member here?), I'd love to see some actual pictures of it! (Pictures on eBay can always be a bit deceiving...)

TomVDJ I'll check that out later, thanks!

TomVDJ said:
If someone actually has one of this eBay seller (don't know if he's a member here?), I'd love to see some actual pictures of it! (Pictures on eBay can always be a bit deceiving...)
Click to expand...

He is the member I referred to in my earlier post.

RPF PREMIUM MEMBER
OK, so aewnet = awol007 ? Yeah, I saw some pics of awol007 cane's here on the RPF, but they looked different than the cane on eBay? Maybe I should take another look .

RPF PREMIUM MEMBER
I bought one of Rylo's unfinished cane kits. Still have it, unfinished. The perfectionist in me is afraid to ruin it. "It's a gift, and a curse"

This is a great comparison.

It's a shame there aren't a lot of photos of the screen used prop. Only ever seen low resolution pictures, or one of the crew canes that look very odd.

RPF PREMIUM MEMBER
Yeah, there are a lot of pictures out there that claim it's the screen used cane, but most of the time it turns out one of the gift canes to the crew members...

i got a cane myself to , not sure who the creators are but its really nice , one of the best canes i have seen in my opinion. its made out 1 piece of wood , only the bottom doesn't have a rubber padding.
take a look ( not for sale ) 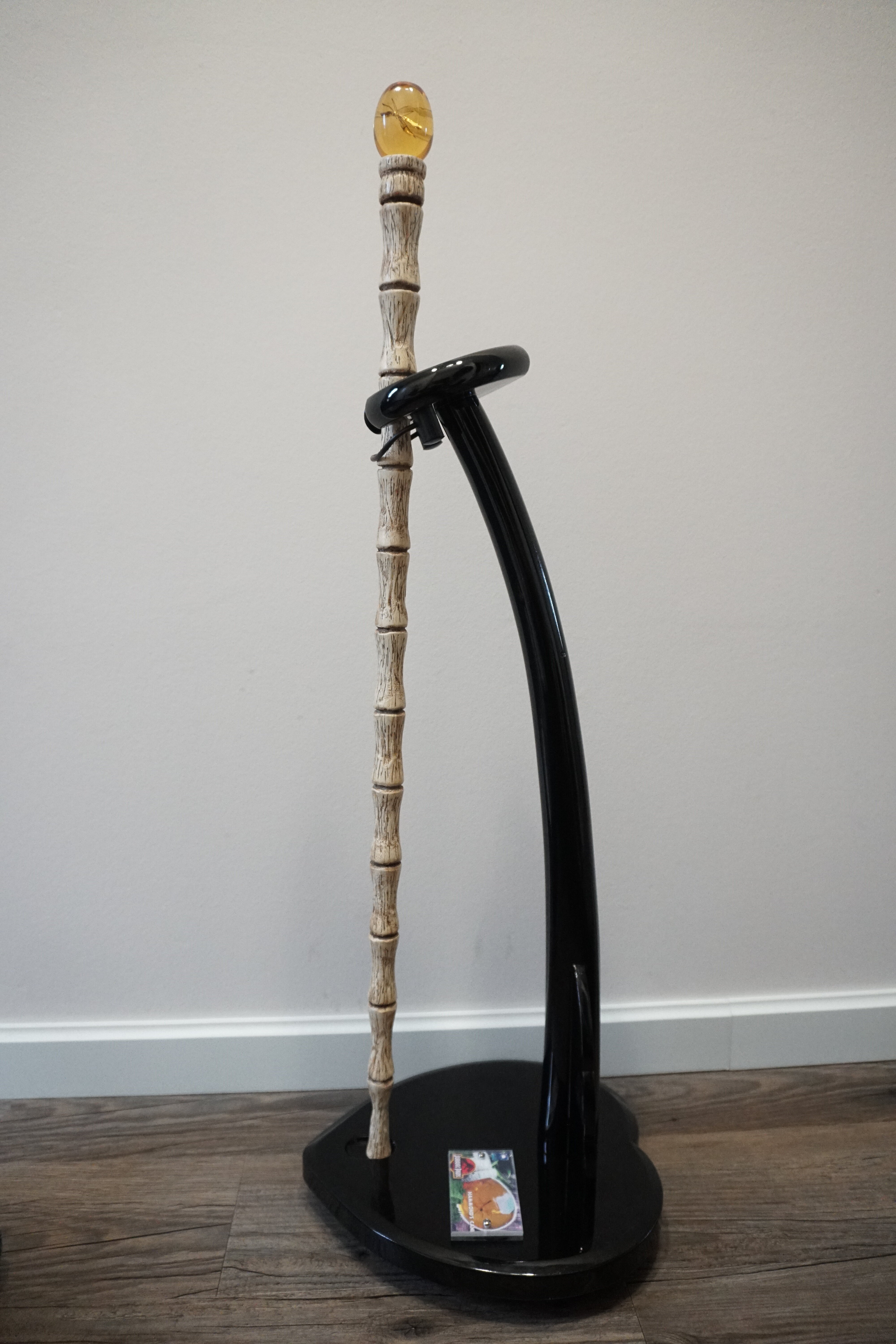 TomVDJ said:
If you can post some good pictures of awol007's cane, that would be great.
Click to expand...

Sorry late to the thread. Been off the forum for a bit.

I do still make them. Mine are now a single piece of hardwood turned on a lathe. They are strong and can be used as a real cane. A real crane fly is used for the amber too. I make them in 30, 32, 34, 36 and 38 length so that they fit the user. Attached an image of some amber I polished today and a cane example. If you'd like some more images let me know.

I also made a cane out of antler which I personally really love. Lol. The real prop was supposed to be dino vertebrae so I used antler as my bone material to see how it would come out. I really liked it. I posted a thread on here when I built it.

John Hammond Cane Made Out of Bone - Jurassic Park

So, the original Hammond cane is supposed to be Dino bone segments (vertebrae I think). I like trying to make realistic versions of props. So I wanted to try and make a the cane out of the material it was supposed to me. I didn't have any Dino bone lying around unfortunately so I thought about...

Looking for suggestions for a walking stick or cane.

For the Jurassic Park John Hammond Mosquito in Amber Cane Top What kind of Polishing Compound Would Be Best For The Resin?

Why can’t I find a lousy crane fly? Jurassic Park failure, with picture. HELP a prop brother out.