RPF PREMIUM MEMBER
Since I don't want to hijack Audrey's thread about his 3D printed Jumanji board any more, I think it's fair to start my own thread about my project.

Inspired by the wonderful info and material Audrey2 provided in his thread (especially his detailed board plans and sharing his 3D modeled front relief, which are the base for all of it), I finally started working on my own 3D printed Jumanji board.

While right now I am still (digitally) modeling it at full scale measurements, the actual idea is to 3D print the board at about half scale (49% to be exact), to work as a case for the Blu-ray of the movie. This requires a few alterations from the prop, mainly lowering the playing area further down into the box, to allow the lids to close over the Blu-ray case. Also, the case would now be only resting on the center dome, so my idea is to raise the starting squares in the four corners of the board to be above the height of the dome, so that the BD-case would now be supported by these.

As 3D printing is still a few months away (we're moving to a new apartment in a couple of months, which is when I will be buying a Prusa i3 MK3 printer), I'm putting a bit of work into creating nice looking renderings of my progress. I'm actually a professional 3D artist, with zero experience in 3D printing, so that part is actually considerably easier for me. Once I can test the model on the printer, I can decide when and how I can release my 3D (and 2D) files to the public.

Here you can see a few renderings of the current state: 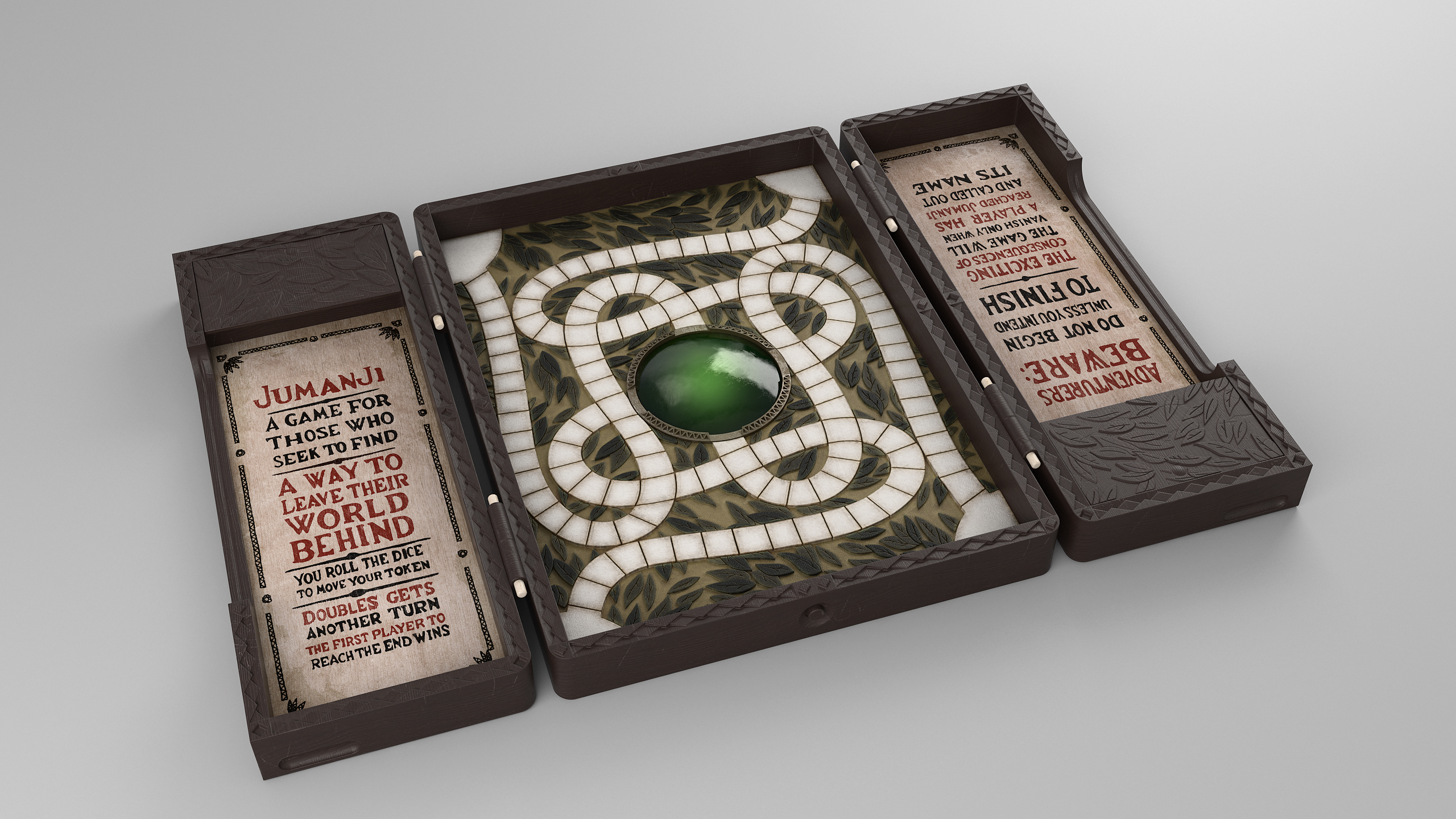 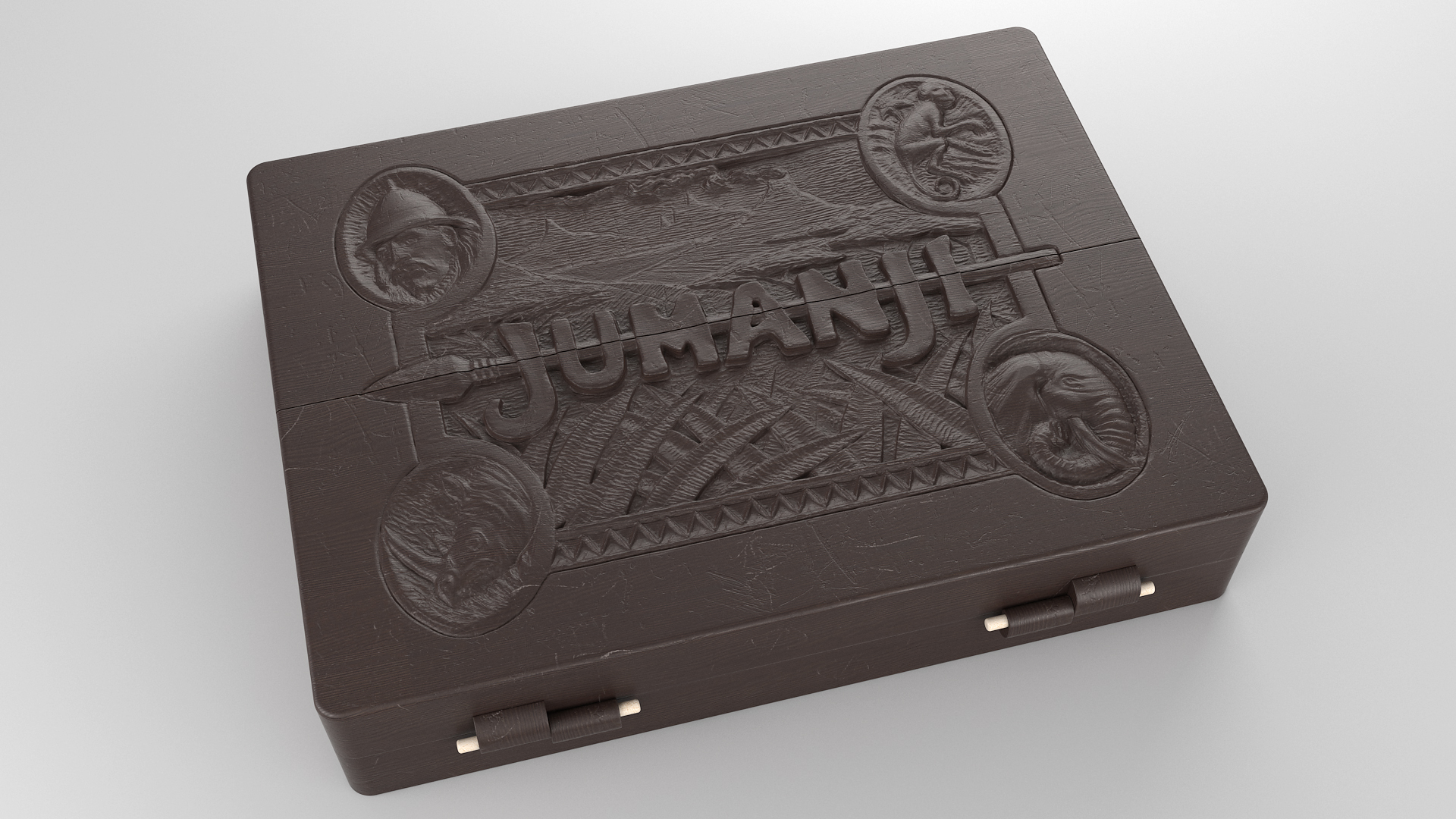 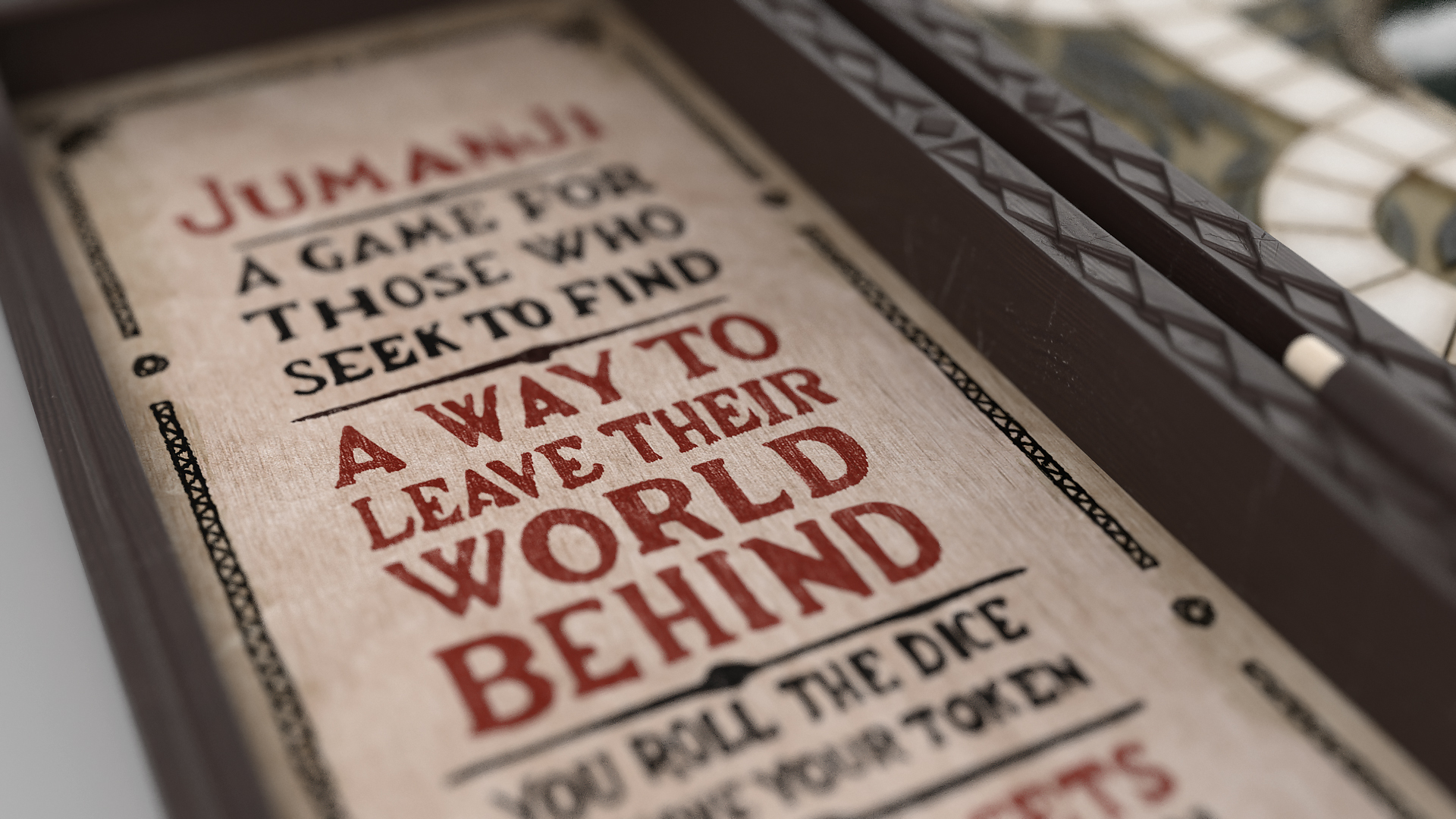 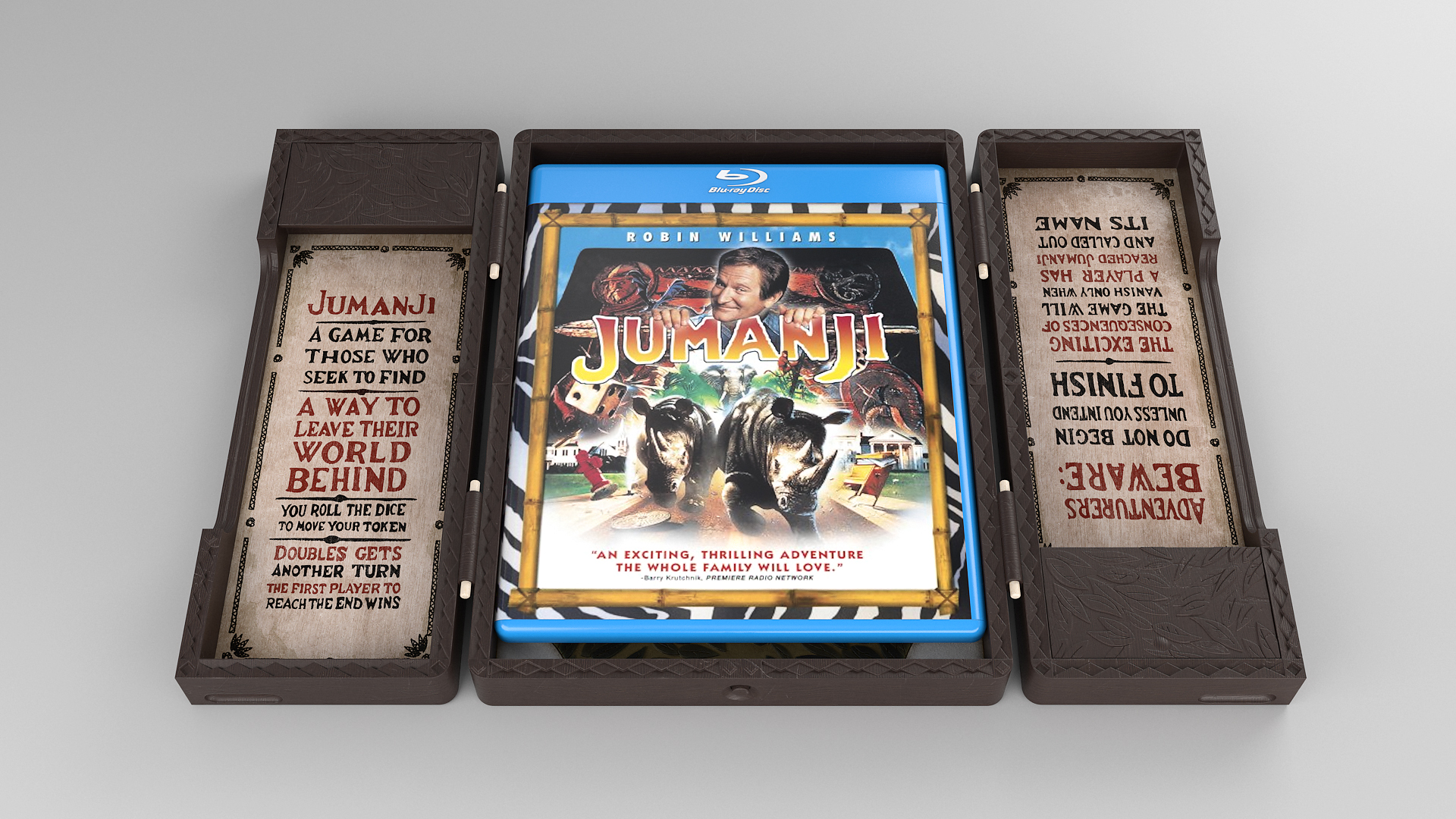 And here are my rules inlays: 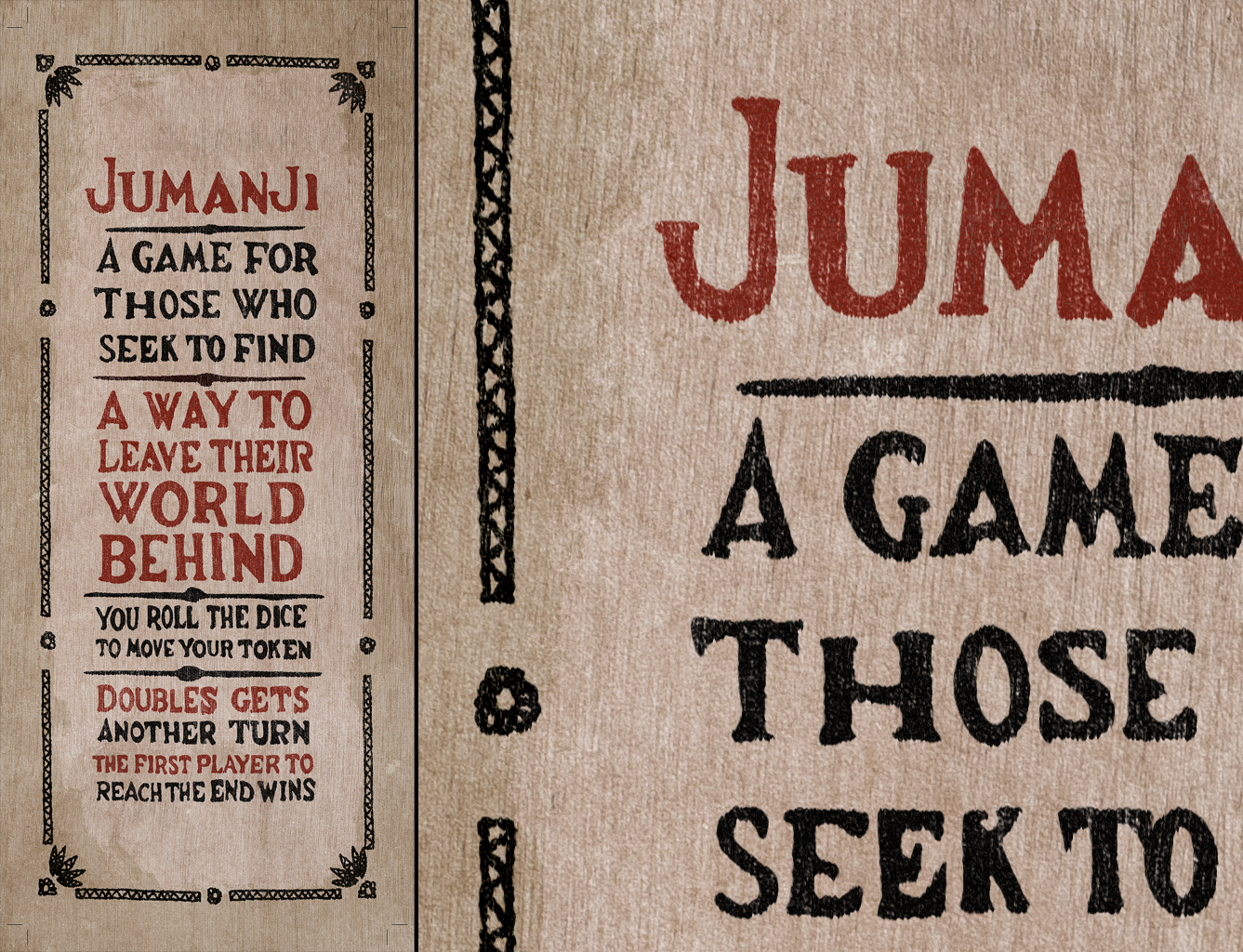 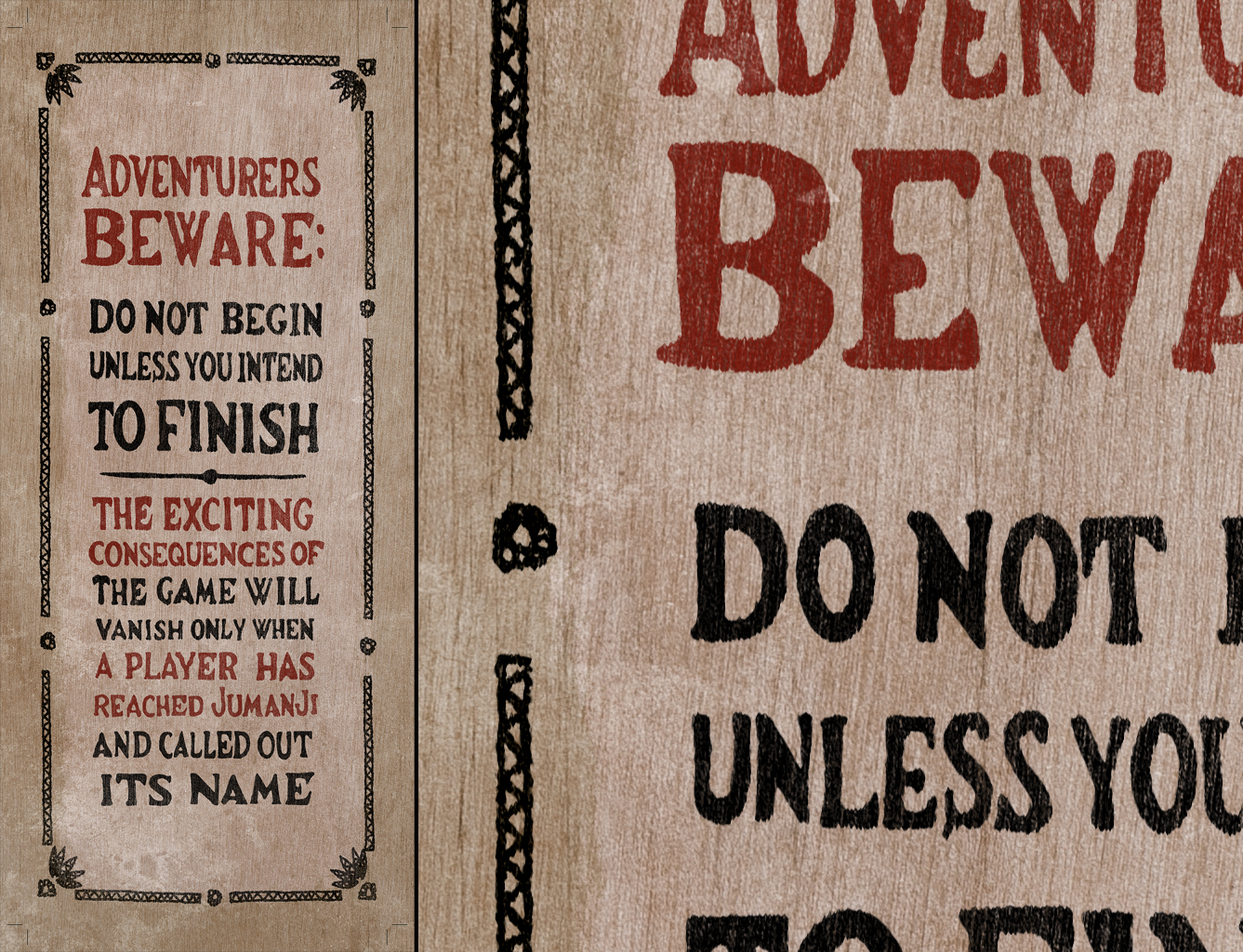 For the front relief I actually generated a depth (or displacement) map from Audrey2's shared model of it, overlayed the screenshots of his 3D scanned prop (to add more detail) and cleaned up the center cut: 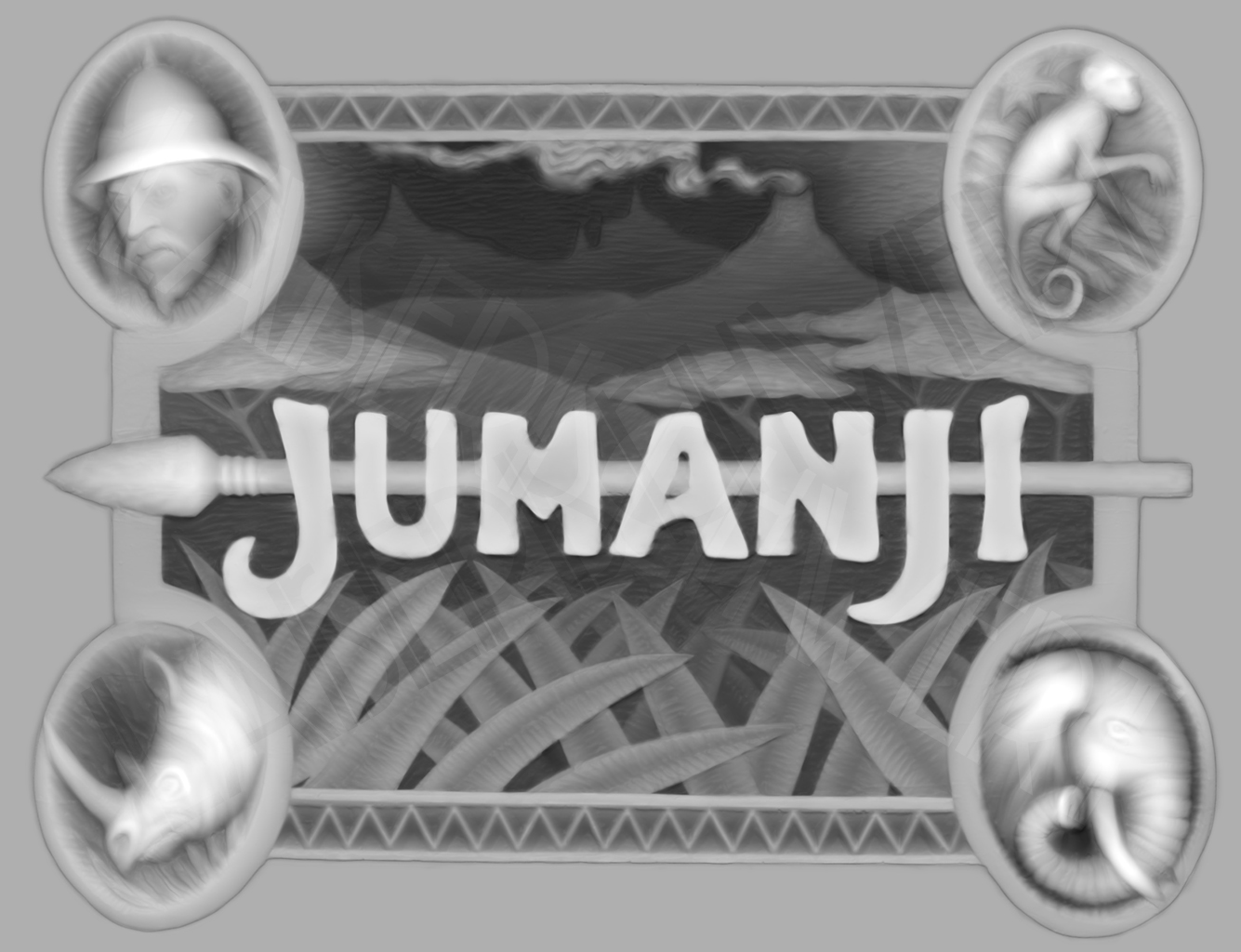 RPF PREMIUM MEMBER
This is such a cool idea! I'll be following this with interest.

An absolutely brilliant idea.
Can't believe the studio wouldn't want this as a collectors edition.

RPF PREMIUM MEMBER
Well, there are the steelbook releases, which at least share a variation of the artwork, but are still just regular steelbook cases, of course: 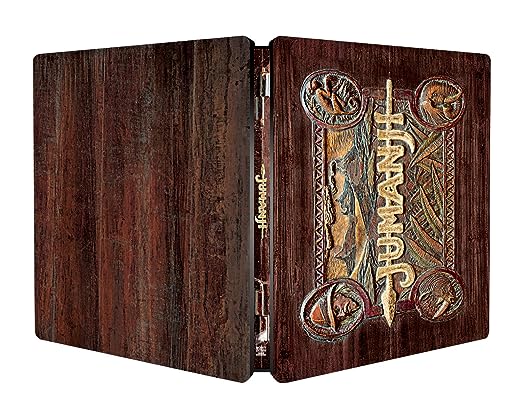 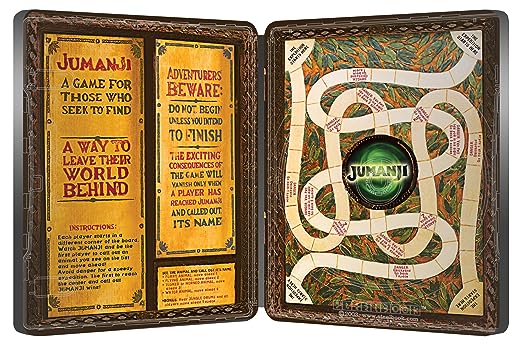 Whats cool about those steel books, is that the front image they used is one of the games they display at Sony. I cross referenced it with images I had taken while I was visiting the Los Angeles area back in 2011.

RPF PREMIUM MEMBER
Laserschwert: Cool Project... will follow this for sure
Last edited by a moderator: Nov 8, 2018

Laserschwert said:
Well, there are the steelbook releases, which at least share a variation of the artwork, but are still just regular steelbook cases, of course:

Yes, the steelbook was nice but nothing like a miniature 3d sculpted game board.

You've done an absolutely stunning job!
I love how you've managed to reverse engineered the uploaded board detail and then add more detail, it's awesome! For the lettering did you take the vectors from the plans and then texture it? Because it looks awesome!

The only changes I'd recommend are on the game area of the board, where you have the player paths (?) and leaves raised from the area around them, whereas on the film board the outlines of them have just been carved into the board with some other areas randomly carved to add depth. This goes for the lids of the areas where the player pieces are stored (we really need titles for these areas).

These are all tiny things, because seriously that looks INCREDIBLE

RPF PREMIUM MEMBER
Thanks a lot for the praise

To be fair, hadn't it been for all your legwork, I wouldn't have started this.

Regarding the leaves I was looking at imnotahero's board (in my opinion the most incredible fan-made version of the prop) for inspiration. I think it might make painting the leaves a bit easier. But I think the compromise would be to not have the areas between the leaves as high as the leaves, so that they still protrude a bit. I have already reworked the compartment lids to take care of this, and I will do the same for the board.

For the lettering I did in fact use you vectors, yeah. But besides texturing them, I've also distorted them a bit using my wood texture underneath, so that it looks like the ink ran into the fibres of the wood. It's not 100% yet, but for now it'll do.

For the renderings I did of course use lots of shader tricks to make the thing look aged and weathered, but once it's printed, all that detail won't be there. So sanding and maybe light scratching will definitely be necessary afterwards.
K

What a 3D print..really creative and interesting. I have just become fan of your creative work.

RPF PREMIUM MEMBER
If you release the files to the public, you'll be my hero.
I'd even love it if you just do a run.
This looks awesome.

RPF PREMIUM MEMBER
That is a great rendering. The only item revealing it isn't a photo was the texture of the white pins.

However the Prusa i3 MK3 or any other FDM 3D printer won't get that amount of detail in the print. You can print it, and then smooth and hand-sculpt in those details, or have it printed on a DLP type 3D printer.

Laserschwert said:
For the front relief I actually generated a depth (or displacement) map from Audrey2's shared model of it, overlayed the screenshots of his 3D scanned prop (to add more detail) and cleaned up the center cut:

What software/ process/ technique did you use to do this? I have a had a few projects that could have benefited from being able to do this.

hdtheater said:
What software/ process/ technique did you use to do this? I have a had a few projects that could have benefited from being able to do this.
Click to expand...

Well, turning the 3D model into a displacement map wasn't that difficult. In 3dsmax I just mapped a linear black/white gradient sideways onto the geometry, then rendered that image from a full frontal (or top) view to a 16bit TIFF. The most work was then done in Photoshop. I layered Audrey2's screenshots of his 3D scan, color correcting them to cancel out most of the large lighting gradients (highpass filter helps). I overlayed that result on top of my TIFF, using Photoshop's liquify filter to move any misalignments into the correct position. Then I used Photoshop's healing brush (and context-sensitive fill) to remove the cut in the center of the image. Finally I turned the area around the relief to a perfect 128/128/128-grey, so that that area would stay in place once used as a displacement map in 3dsmax, while everything darker would get pushed in and everything lighter would get pulled out of the mesh.

RPF PREMIUM MEMBER
I've made a few updates to my model. First of all, here are the game piece compartment hinges:

I know, it's not the metal hinges used in the prop (and barely visible in the movie), but a mechanism that closer resembles the hinges on the outside of the box. Of course these could also be painted metal, if you prefer so. This will need to be test-printed to see if these hinges actually work properly (and still do when printed at Blu-ray size). 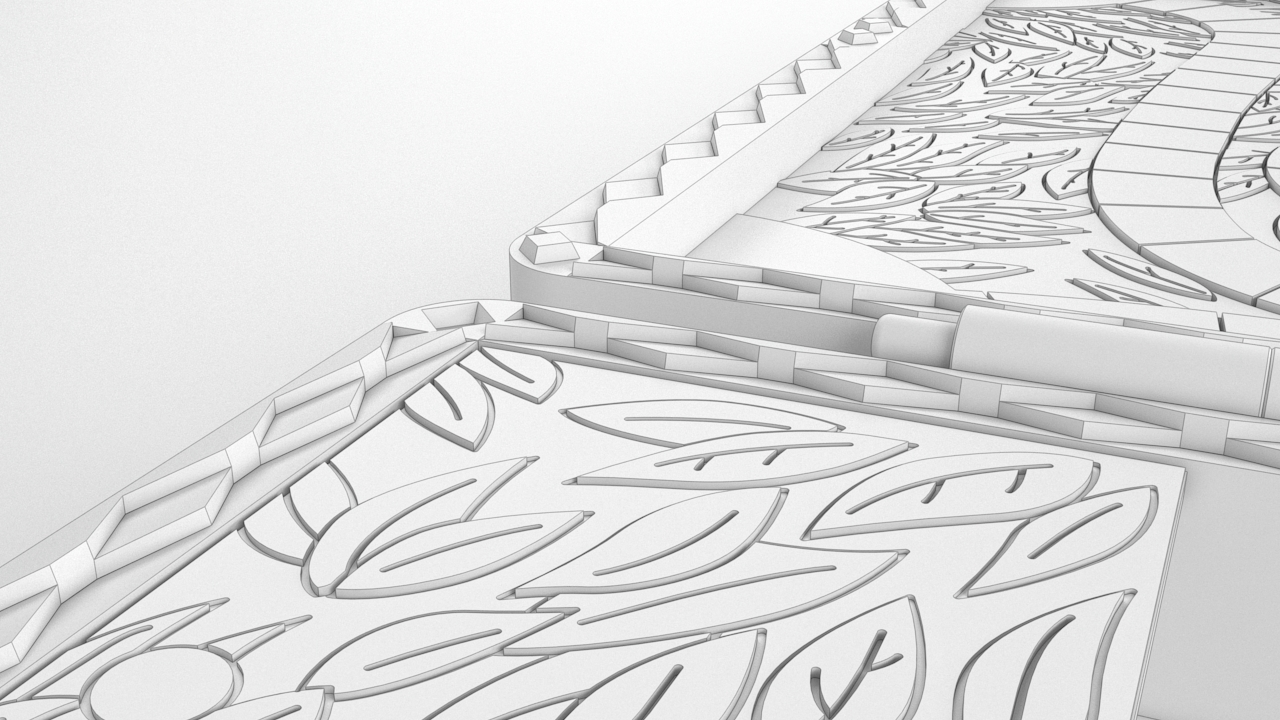 - The compartment lids, which now have all "lines" from the leaves carved into the lid AND the leaves stick out a bit (sanding them down will give them nice, round edges)

- The play area, with basically the same fix as the compartment lids

- The edge teeth, which I've completely remodeled. They are now based on the plans by VladMartin, which seem to correctly resemble the movie version and correctly protrude from the border of the box. They look a bit crummy in the rendering (modeling them is REALLY fiddly), but once printed they bite perfectly into each other and should look great when sanded down a bit.

What I still plan to do is reducing the size of the border diamonds (both pins and holes), because the walls of the holes looks a bit thin to me. Also I need to figure out if and where to place indetations to add magnets (for the compartments, and the main lids). Suggestions are always welcome
Last edited: Feb 9, 2019

Laserschwert said:
The edge teeth, which I've completely remodeled. They are now based on the plans by VladMartin, which seem to correctly resemble the movie version and correctly protrude from the border of the box. They look a bit crummy in the rendering (modeling them is REALLY fiddly), but once printed they bite perfectly into each other and should look great when sanded down a bit.
Click to expand...

Cool) I'm glad that the plans were useful to you.

That's awesome!
On the film board though, the edge teeth shouldn't protrude out of the board. I've attached a screenshot of my current model to give you an idea of how it should look. Mine should spread a little closer to the edges, but it'll give you a good idea of depth. It's meant to give the illusion of interlocking teeth, without actually providing that (which would have been too difficult for the original sculptor).

RPF PREMIUM MEMBER
Oh man, I don't know what to believe anymore... it really does look like they are standing out in close-ups: 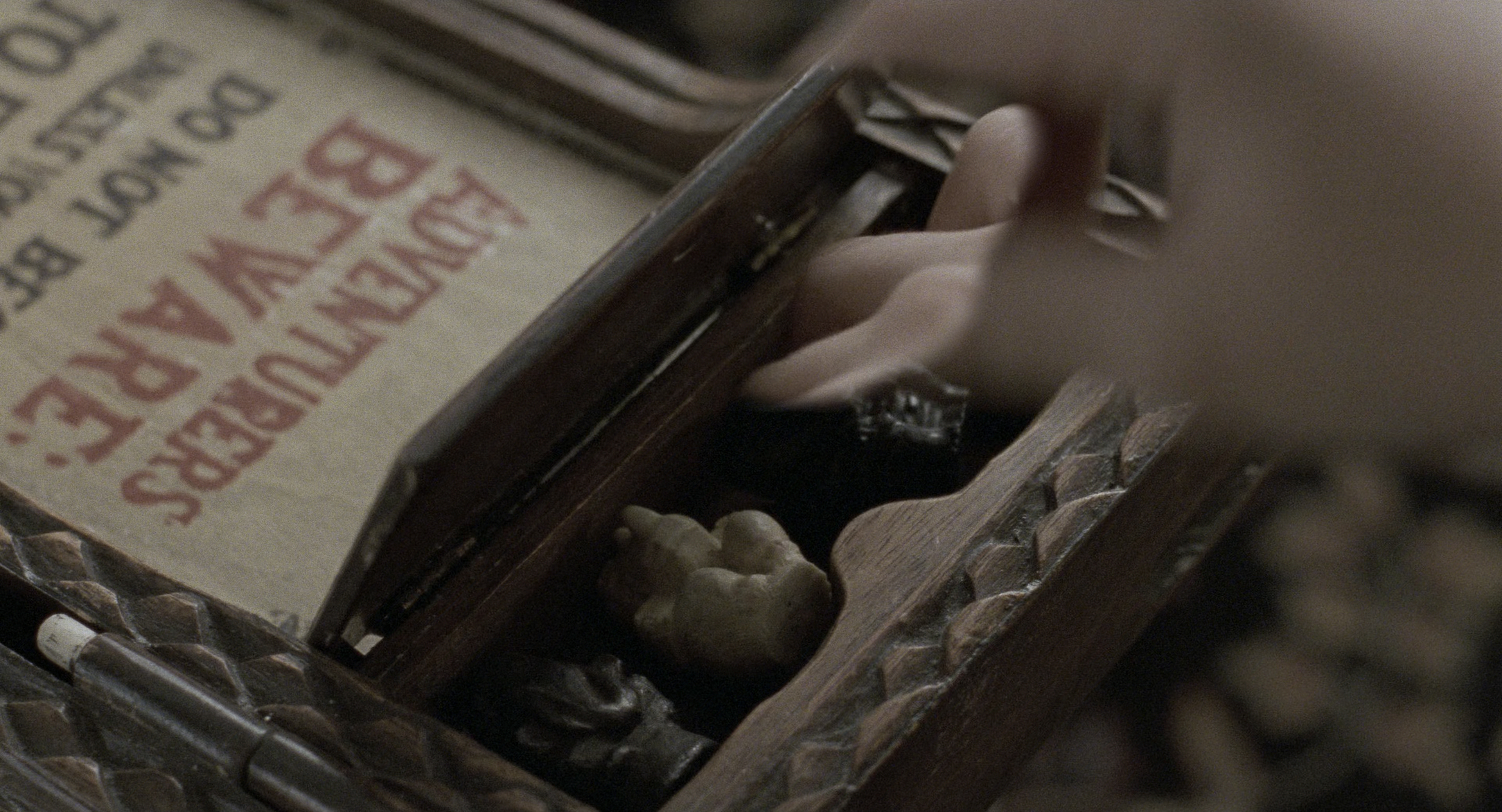 Maybe my edge is just the "idealized" version.


Audrey2 said:
On the film board though, the edge teeth shouldn't protrude out of the board. It's meant to give the illusion of interlocking teeth, without actually providing that (which would have been too difficult for the original sculptor).
Click to expand...

In fact they actually do meant to protrude out of the board. Just look at the farthest teeth. They are certainly at the angle.

And on this shot teeth near 'diamond' are cut off compared to the other ones. That shows the other teeth are higher that the 'diamond' base.

And that's what John Dunstan of Milano Woodworks (who made hero boxes) said on his site:

Since the box lid was to mesh with the base with intersecting “teeth”, the boxes were made 1/2" higher to allow for the wood removed. It was painstakingly slow work using carbon paper to mark the high points that needed carving.
Click to expand...