The last few weeks have been pretty difficult, but starting a new bio sculpt really relaxing and putting my mind at ease.

A little while ago, Robillicus gave me permission to sculpt his "Juggernaut Bio Concept" [many, many, many thanks!]. It's one of my favorite bio's out there besides the original P1. Eventually I'd like to do a concept suit based around the bio which would connect the first Predator movie and the second one. I really hope to do the concept justice.

I'm about 75% done with the bio and hope you like it so far. One thing I noticed is that the face of the bio is more slanted then the concept. I could pull it the bottom of the sculpt [where the four razor things are] back about an inch, but in a way I do like it this way too....so I'm up in the air about it and would really like your thoughts on it.

I used the P1 Stunt as a reference to sculpt the P1 parts and I sculpted it similar in the sense that it has dents, dings, etc... sculpted into the bio so it's not perfectly smooth along the dome. I also used some ideas from the Gort bio for areas that I really couldn't make out 100%.

It's sculpted on an armature of xdmray's gen 1 half mask. As for the size, well....it's a "Juggernaut" bio so it's about the size of the P1 Stunt bio.

There are a few parts that are just proped up for the pic. 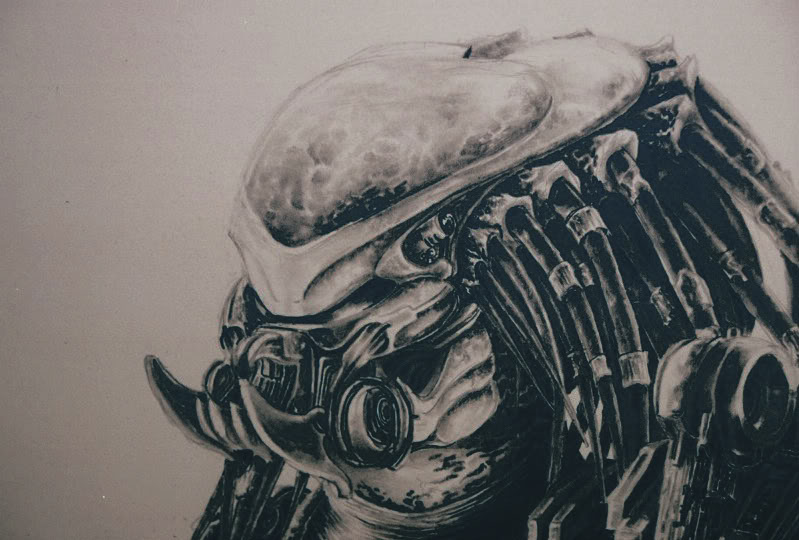 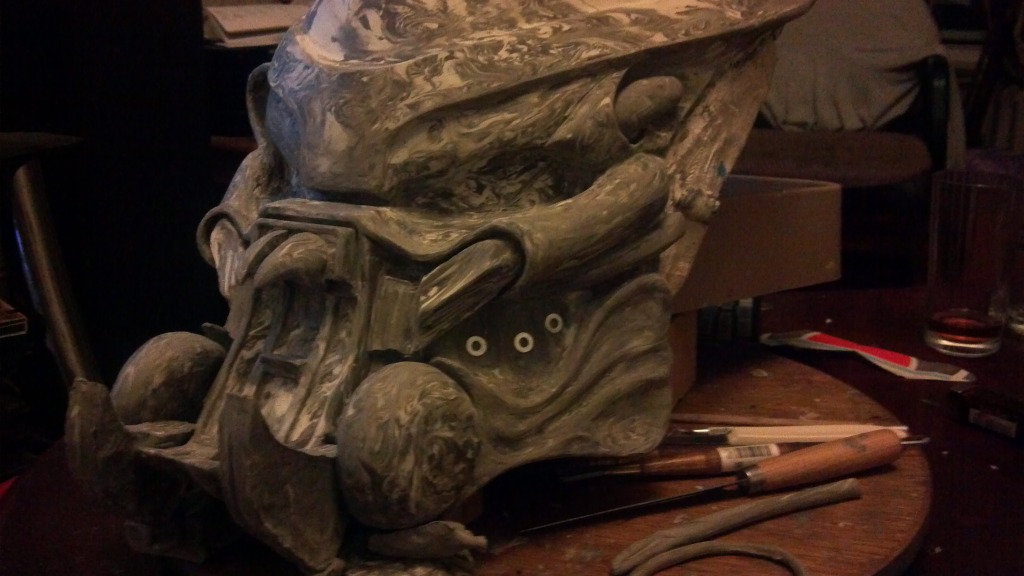 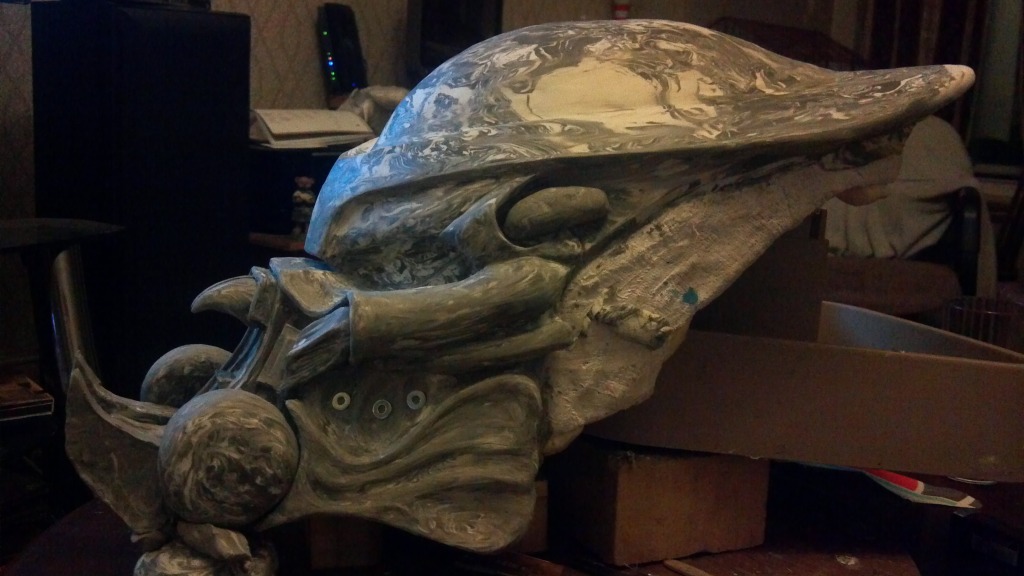 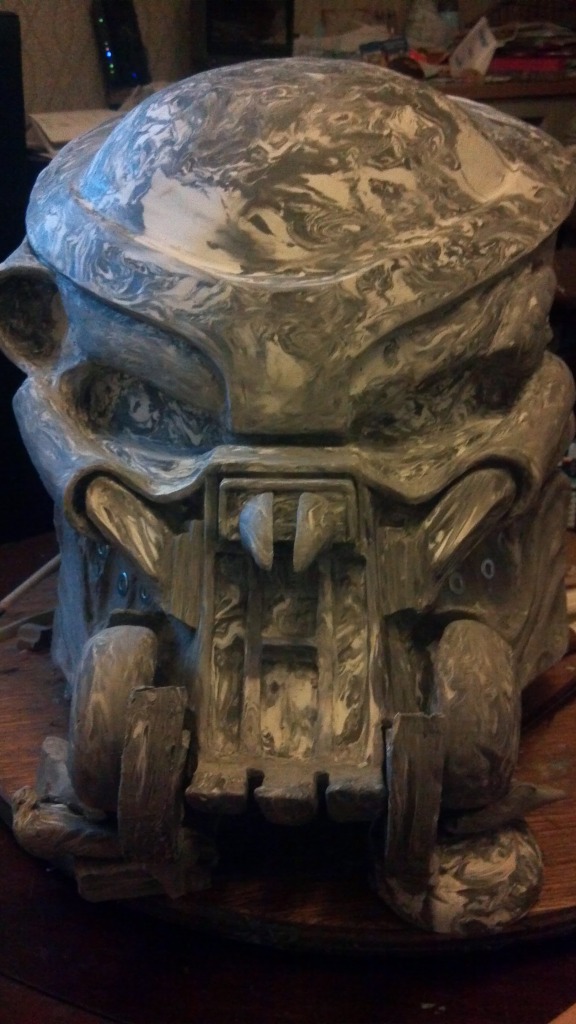 Thanks for viewing and comments are always welcomed!

Fok me Doug - that looks incredible so far! I love Rob's art, and to see you bring that bad to life is wild! Keep on updating us as you go along

I guess i have to star saving, cause this.... I wanna have, robs art is incredible, first shinto now juggernaut, amazing, i had a drawing of a concept with similar jaw, only i called it brother celtic, im still working with my sketch, ill share with everyone when im happy with the end result, please keep us updated on this great bio sculpt
U

nice to see some of robs ideas getting the clay work they deserve.

Very cool Doug. I would leave it as it is, as far as the face goes. Robs drawing almost looks a little short in the face, but the sculpt looks a little more realistic in terms of size, so don't change a thing.

WOW! That is super cool. Cant wait to see this finished up.

Some very precise lines in there bud. I like it. Kudos for working in marbleized clay. That would drive me nuts. lol

The talent on this board is scary! Great work so far, love the look of it.

Fooooking hell, phenominal work there bud. I like that alot, love the lines - mean looking.

Many thanks for the kind comments guys, greatly appreciated.

That bio is gonna look so bad a** once it's done. Can't wait for the next update.

Holy ****, my jaw has locked open ubber skill there mate, i to will be queing for this one me thinks


In the third sculpt pic from the top, there is an open space on the side of the round things. I want to leave it on this angle so I have to fill something in there. I have some 3/8" wire cover that Made007 is using in the Terminator Bio Sculpt and was thinking of using it in here. It would cover the gap, be another shout out to the Gort with the houses, and somewhat fit into the theme of the Industrial look of the bio.

Thank you for your thoughts.

Sound pretty cool, i cant wait for the next update

that bio is gonna kick some serious ass!!!! the drawing (by rob) and the sculpt (by you) are amazing!!! and that patern on your clay( u mixing two differemt color clays probably) its amazing, imagine how bad ass it would be if it could be painted like that!!! it complements the sculpt a lot !!! i love it , and as made007 said, i need to save for one cause i want one !!! lol

Many thanks again guys, I'm glad you like it. I hope to have some time to work on him tonight.
N

Awesome work bring the design to life bro. I would stay away from the hoses like the Gort bio has. This bio already has a gort kinda overall shape to it . I think the hoses would make it look too much like the Gort and less like a totally different bio altogether. (that might just be me...)