Paul Andrew said:
Have you not seen it at all yet?
Click to expand...

Nope. Of the DC films, I've seen only the following:

Shazam was fun, but yeah, looking at the list of DC flicks.....nothing is going to land on a top 10 list that's for sure, unless it's top 10 bad comic book movies.

Solo4114 said:
Nope. Of the DC films, I've seen only the following:

I can't say as I would recommend BvS or JL, but of the two JL is more watchable and closer to what those characters are like in traditional canon.
Shazam is actually pretty fun and has a great climax sequence. WW84 is fine imo, but the first is MUCH better.

Bigdaddy said:
Dam it! That's the ONLY thing I want!
Click to expand...

Well, they have already announced the sequel title; and this may be of interest to you:

Justice League 2: This One Is For The Marthas

...and there will also be a “Snyder Cut” too called:

Justice League 2 (The Snyder Cut): Wrath of The Marthas

RPF PREMIUM MEMBER
If you thought Man of Steel was tedious (which it was) BvS was downright painful..... Two plus hours of the most inane crap I've ever watched and the climax left me laughing hysterically.

Wonder Woman was good. Overlong and a goofy villain but overall really entertaining. I never did see Shazam but it looked like a lot of fun.

Don't waste your time on WW84. It's not even worth a laugh. Aquaman looked ridiculous and Justice League looked awful. Reshooting the movie and adding Jared Leto isn't going to save it, it'll likely be worse. There's something about that guy that just rubs me the wrong way. Zack Snyder just doesn't have a very good track record. Man of Steel, BvS, Watchmen. All bad. And Sucker Punch. Man if there was ever a movie that ironically displayed such a distain for women and what they have to offer the world, it was that movie. It was clearly meant to be empowering but it did the exact opposite. Disgusting.

RPF PREMIUM MEMBER
Snyder's problem is he films his movies to look dramatic rather then let the story itself define the drama. A cold color palette with loads of slow-motion shots of characters depressingly slogging along. Not exactly the approach you wanna take for a fun superhero romp.

Solo4114 said:
Nope. Of the DC films, I've seen only the following:

You're really not missing anything. For some dumb fun, Shazam is fine, but the rest, just skip.

RPF PREMIUM MEMBER
I honestly DO NOT mean this to be snarky, cause everyone is free & entitled to opinions, but is there anyone here (besides me) who enjoyed these films & want to discuss or have excitement for this movie?

RPF PREMIUM MEMBER
I really enjoyed Wonder Woman. The scene of her coming up out of the trench and using her shield to block the gunfire still gives me chills. It's the type of superhero moment that's become iconic and it's well developed enough as a story that I can easily overlook it's goofy main villain showdown at the end. It was also a clever move to set it during the Suffrage movement and contrasting it with Diana coming from a society of powerful women.

RPF PREMIUM MEMBER
I enjoyed the first WW, and Shazam was dorky fun. As much as I have always loved Batman and Superman comics, everything DC has done (with the above exceptions) starting with MOS has been brutal to watch.
I keep my hopes up for each new movie, and then regret losing those two hours of my life.
I’ll do it again for the Snyder cut, I‘m sure, because I am obviously an unrepentant masochist, only this time it will be four hours of my life.

dbuck said:
I’ll do it again for the Snyder cut, I‘m sure, because I am obviously an unrepentant masochist, only this time it will be four hours of my life.
Click to expand...

But at least this time you can break it up and it doesn't have to be all in one sitting.


Usagi Pilgrim said:
I honestly DO NOT mean this to be snarky, cause everyone is free & entitled to opinions, but is there anyone here (besides me) who enjoyed these films & want to discuss or have excitement for this movie?
Click to expand...

I enjoyed most of them to an extent. By no means do I think they're great films, but I can still find things in them I like. BvS was the one I had the most trouble with. Joker, while a well made film, felt incredibly tone deaf and pandering to me. I understand why a lot of people from geek culture like it and frankly it makes me sad.

RPF PREMIUM MEMBER
I'm not a fan of the DCEU and its mainly because of Zack Snyder. Don't get me wrong, I'm a fan of some of Snyder's work. His remake of Dawn of the Dead in many ways surpasses the Romero original. His adaptation of 300 is downright amazing; seeing the imagery of Frank Miller's comic brought to the big screen is surreal. And despite its problems, I loved his adaptation of Watchmen.

But the DCEU that he had a big hand in establishing just doesn't sit right with me. Aside from the first 10 minutes or so with Russell Crowe as Jor-el on Krypton, I hated Man of Steel. Snyder's Superman was so dark he might as well be Batman. Added to the fact that Cavill has the charm and charisma of a rusty door knob, the movie felt uninspiring and depressing. BvS was a hot mess. It was only after the Ultimate Cut came out that I was able to actually watch the movie and make some sense out of it. I thought Affleck was amazing portrayal as Batman. Gal Gadot as Wonder Woman was also equally amazing. Cavill was still as bland as ever, and Jesse Eisenberg was terribly miscast as Lex Luthor, one of the worst casting decisions in cinema history. And don't get me started on that whole "Martha" bullcrap.

I thought Wonder Woman was overhyped. Its a decent film but it wasn't great. And seeing the climactic battle between Diana and an anything-but-scary-looking David Thewlis made the film end on a less than stellar note for me.

Suicide Squad was a disastrously edited film rendering it totally unwatchable, and Jared Leto remains to this day the worst version of the Joker ever brought to the big screen.

I thought Aquaman was equally overhyped. It was fun in parts but there were also parts that were bad. I thought Black Manta was totally unnecessary, and that his costume looked goofy.

Justice League. What a mess indeed. An incoherent storyline and bad CGI made it a chore to watch.

Then the Snyder Cut was announced. I have a feeling unless you're a DCEU fanboy who will devour everything and anything DCEU, the Snyder Cut won't be that much better than the theatrical. Sure, it'll be longer, that's for sure. From what I saw in the trailer, it looks like what we'll get will be a 4 hour cut of what Whedon had condensed with some new scenes added it just to pad the movie and make it look epic. The bad CGI is still there. And just as in the case of the Harlin vs Schrader cuts of the Exorcist prequel, you can retool and relabel it all you want, but its gonna be hard to make something bad better. Its different if Snyder had consistently given us exceptional DCEU movies before Justice League, but he gave us the underwhelming Man of Steel and the hot mess that is BvS. Add to that the focus shift making Ray Fisher's bland and boring Cyborg as the heart of the movie, I'm not sure I'll be able to actually sit through all 4 hours in one sitting. But regardless, I will still watch it and give my verdict. I'm just keeping my expectations super, super, super low.

RPF PREMIUM MEMBER
I personally don't think that Snyder is a master filmmaker, nor do I feel that ANY of his DC films have been masterpieces, but I think I view these movies as victims of 2 very clear missteps-

1-Snyder was trying to tell one overarching story over his planned 5-6 films, which caused SEVERAL ideas or themes he was attempting to plant, become 'WTF were you thinking?' moments in the individual films. I believe this was directly related to number 2...

2- The studio gave him the freedom to start, with him believing they were behind what he wanted to do, & they panicked & bailed. They not only did it with him, but with Ayer & Suicide Squad as well.

Now, I don't think it's ALL on the studio. Creators for years have been trying to elevate comic characters & stories to the level of Shakespeare, either because they want to convince others that comics are worthy stories & not just for children, or just to recycle into a modern platform. If you liked comics & want to show others why, pick up the daggum comic that meant something to you & explain it! Stand by your likes & dislikes for the reasons you feel that way!

I've said it in several other threads, & maybe even here, but I personally feel that we were always supposed to be leading to the end of the JL & having the characters be who we expected them to be by then. It's like watching a characters origin story where you see them from birth, through their trauma, their decision to be a hero, watch ALL their mistakes & dumb decisions, their redemption, & then at the last scene of the movie, after 2 1/2 hrs, they put on the suit & are FINALLY what we came to see.

Then the movie ends.

Some will appreciate that & enjoy the story. Others will be freaking pissed & feel cheated.

I guess I'm just saying that when this next 4 hrs are over, I'm see if my faith will be rewarded or if I'll be mad at what could've been.

Either way, I still got the Timm-verse stuff like Batman TAS, The Adventures of Superman, JL, & JL UNLIMITED. Those are the definitive version of DC for me, & I can go snuggle in that mental blanket all that I want. Lol

RPF PREMIUM MEMBER
So the movie is shot in 4:3??? That's an odd choice. Or is it only the trailer?

RPF PREMIUM MEMBER
I read it has something to do with being shot for IMAX.

My understanding is the entire movie is in 4:3 because Snyder likes the IMAX look.......even though it’s being released for home.... 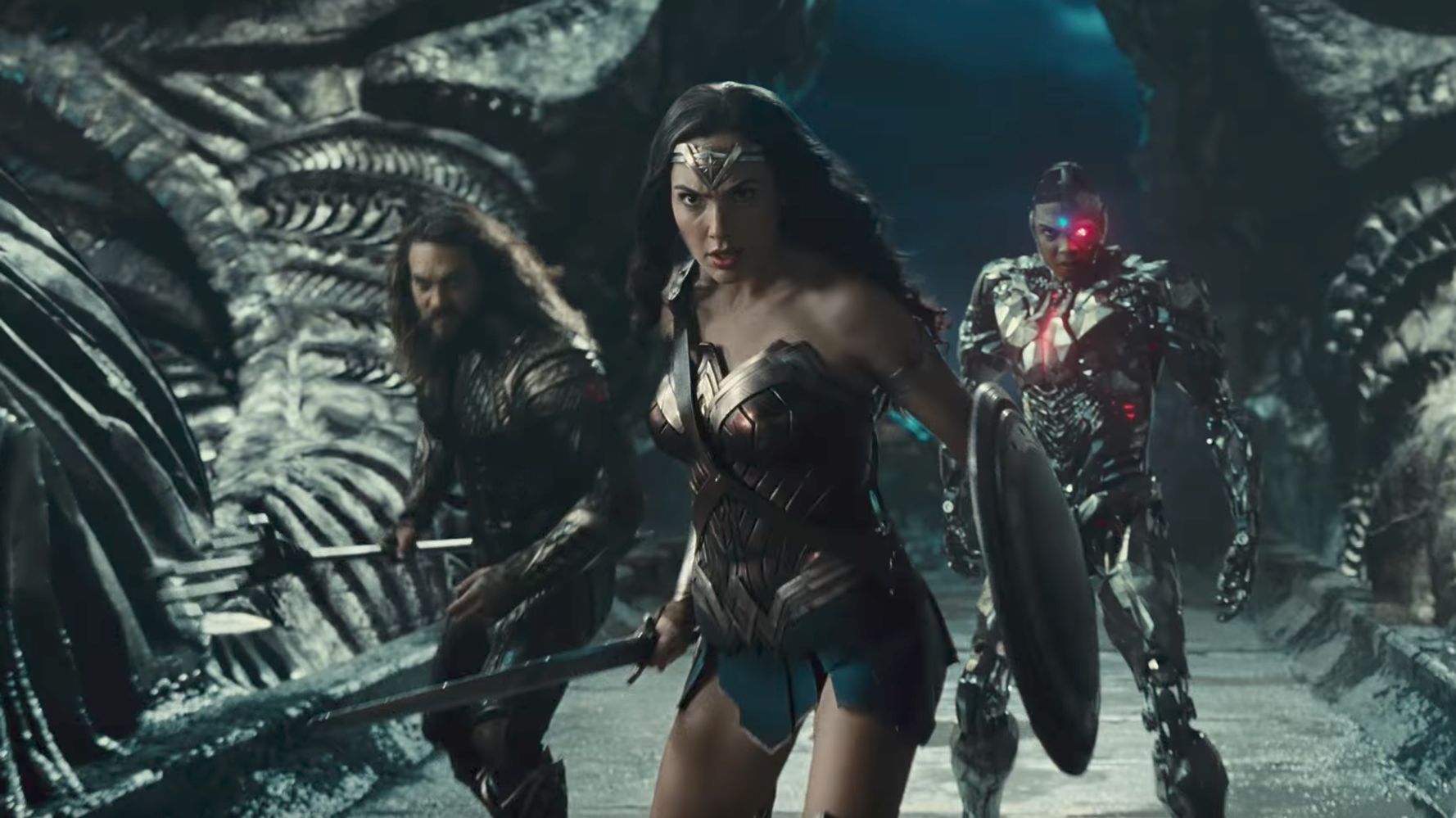 The studio supposedly thought it stepped in it with the superhero movie.

A demoralizing battle with Warner Bros. A devastating personal tragedy. A fan base he couldn’t control. Zack Snyder tells V.F. why he quit ‘Justice League,’ and why he’s returned to complete a cut that’s reached near-mythical status.

RPF PREMIUM MEMBER
Alright guys, can anybody tell me if we have any clue what percentage of this film is different? Sorry if that’s already been stated, I’ve just been loosely following the thread.

I’m always used to seeing “Director’s Cuts” as maybe longer, slightly different versions of a released film that don’t significantly alter the overall story being told...but I feel like this is actually a completely different film, is that correct?

Yesterday at 12:25 AM
Inquisitor Peregrinus