Hi there all, this is my first real post here, although I’ve been making costumes for a few years. This post will cover the Jawa costume I made for my son.

I based the design and construction of the costume largely on 501st standards, and on previous builds by members of the 501st as well as people here on the RPF and elsewhere. I’m in the 501st but since they only officially approve costumes if you wear it yourself, I thought I’d put it up here instead. There’s nothing majorly innovative about it, but I’d like to show it off, and of course if it helps anyone out there more easily make their own, then that’s great!

The fabric many people recommend is monk’s cloth, although they admit that it’s not actually accurate to the original fabric. I decided to look around, and found this jeans material that I thought looked a bit more like the original material, although it’s still not perfect by any means.

I dyed it brown, using the formula that I saw most often, which was 4 RIT dark browns to 2 sunshine oranges. I should note that this was probably way more dye than actually needed, considering the small amount of fabric. 2 Browns and 1 orange would probably have been enough. I was happy with this result, but it does depend on the movie you want to replicate. Some earlier Jawas looked a lot more orangey-tan than dark brown. This was the first time I dyed fabric, but it was easy. Basically wet your fabric ahead of time, then boil water in a pot big enough to fit your fabric, stir in the dye and some salt (see the packet instructions), and then put in your fabric. After stirring for half an hour, wash it out in water until the excess dye is all gone and the water runs clear. Then hang it up to dry. The last pic shows the color as it was still wet.

Here's how they looked after drying, and before any sewing:

Please note that your fabric may shrink significantly after you wash it (which you should do)! I intentionally made mine several inches too long so it could ft my son for a few years as he grew, and it shrank so much it fits him perfectly now, but won’t last for long in the future! The pictures below show it draped on him as I was working out the measurements, and the robe drags multiple inches on the ground. In the final pics in the thread you can see how the bottom of the robe is just off the ground.

Washing will also create a lot of snarls and loose threads on the ends. For a Jawa, this is great, except where you have to sew it. I cut off the unraveled edges where I needed to sew it, and I used a needle to pick at the edges of the fabric on the end of the sleeves and the bottom of the robe to create even more of a worn, frayed look.

The hood is sewn down the back, and is hemmed on all edges. The hood is lined with black fabric. The brown fabric folds inside just a bit, and is sewn so it has a hollow tunnel running around the opening. I put a piece of black 14-gauge electrical wire (which I pulled through using a stiffer silver piece of wire, as seen in the second pic) inside the tunnel and sewed it shut. This gives the hood opening some stiffness and shape, so it doesn’t droop too much. (Again, this stuff is not my idea, I’m building off of the 501st and other builds.

The face mask has two parts. Directly on the face, I used a classic cheap domino mask, and attached two LED “Ashland submersible lights,” available at Michael’s. I sanded the interior of the lights’ cover, and then painted the interior orange, and also painted the actual LED bulb. This all helps keep the bulb’s light diffuse, so you don’t get a hot spot of bright light in the center; instead the whole circle glows. They have a little hook on the back, so I attached them to the mask by putting some small slits in the mask and just slipping them on. They use button batteries that stick right in the light, so you don't need a cumbersome battery pack.

On top of the domino mask, I used some sheer black fabric. If you put it up to your face, you can see out easily, but when looking at it from the outside, it appears opaque. I just went through the fabric store until I found some fabric that worked well in this way. I sewed this pretty informally, making a basic hood that draped over the face and neck. After some experience wearing it, we decided to add some strips in the front, similar to the main hood, to keep the bottom-front of the mask from flopping out of the bottom of the hood. It would also have worked to just have the exterior mask be longer. Please note that this can make for a bit of a claustrophobic experience; you feel a bit trapped by the mask if you’re not used to it. (The first pic shows the hood from the front, with the strips just hanging down, unused. The second pic, from the back, shows how I seamed the top of the hood, and shows the strips wrapped around the back, which pulls the front of the hood back towards his neck and keeps it tidier.)

One of the only things that has been frustrating with the costume is that even though the eyes were painted orange, they looked red when viewed through the sheer black fabric on top of them. They glow orange on their own, but shift more towards red under the sheer black fabric. I repainted them as yellow-orange, and it looks better now (more like the correct “amber” color), but honestly they could still be even more yellow. Most of the pictures here are from the “too red” era.

The boots are rain boots from a thrift store. I covered them with strips of fabric, attaching them with spray glue, and used some other random glues like hot glue and E6000 when parts of the pieces didn’t stick down well enough.

The gloves are purchased, and are standard elbow-length black costume gloves.

I'll post the pics of the finished costume with bandoliers in the next post since it seems that I've hit my image-posting limit!
Last edited: Nov 30, 2016

The bandoliers (both reproductions of British pre-WWI bandoliers) were purchased via eBay. These are two of the screen-accurate styles of bandoliers; there are also other types but they’re harder to find. Jawas wore them either across the shoulders, or as a belt, in any of a variety of combinations. My son decided he liked the criss-cross style. Although it’s not seen in most of the pictures here, one of the bandoliers has an empty space on it which perfectly fits the width of the other bandolier, so they can cross without being too bumpy. In retrospect, one would have been enough (and would still be accurate); two are kind of heavy for him, and they were not cheap. They are pretty handy for carrying stuff with you, though!

And here are the final pics, all sewn and assembled, one without bandoliers so you can see what that's like, in natural lighting and flash so you get a sense of the eyes, one from the back, and a couple out in public! Again, most of these are pre-eye-repainting, they're a bit more orange now.

All together, I made this pretty quickly and easily, it took less than a week, and my son and I were very satisfied with the results. He has had a good time wearing it and really feels like a Jawa.

This is great! Thanks for sharing!

great job, I like how the color turned out!

So very cool. Welcome to the forum, man.

Thanks so much everyone! I really appreciate the kind words.

Love it! So much better then me and brother were able to pull off in the 70's 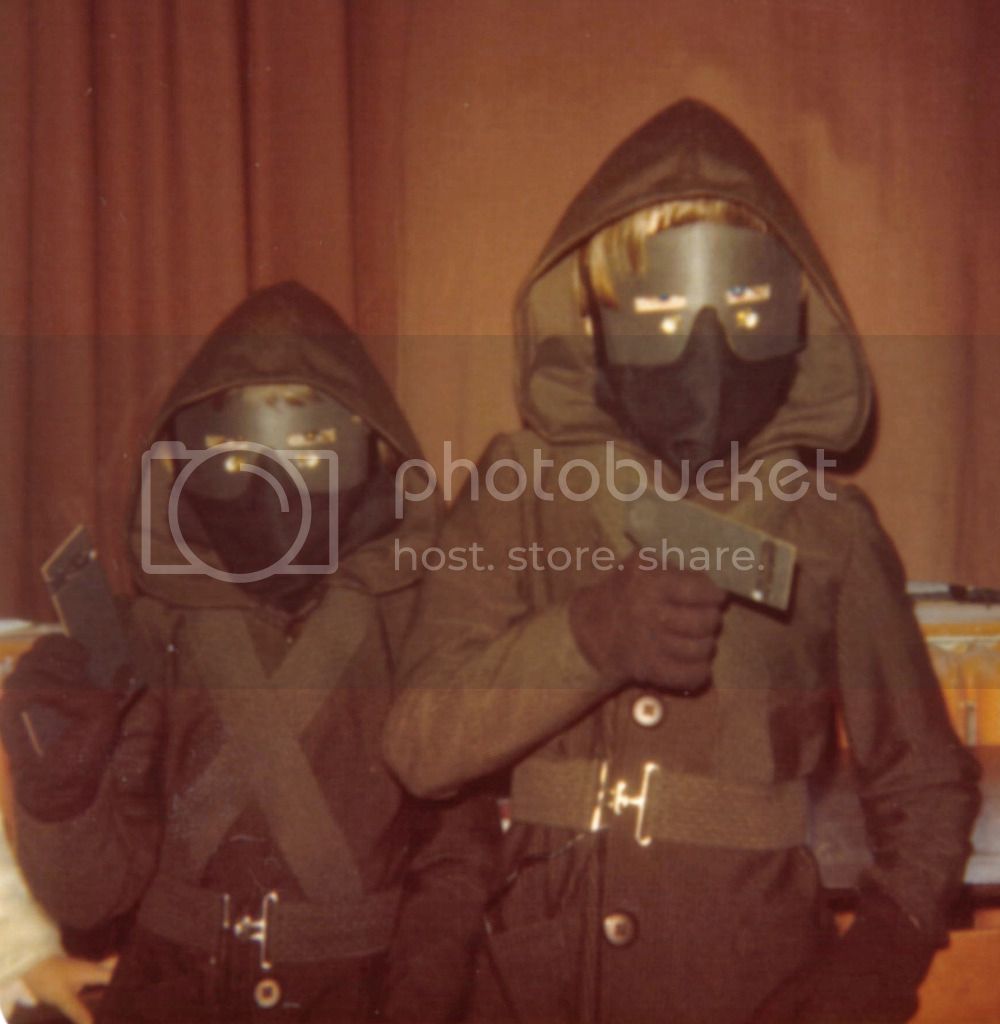 Tumbler said:
Love it! So much better then me and brother were able to pull off in the 70's

Wow, those are actually pretty sweet for some kids in the 70s!

B
I See Star Wars Everywhere!