RPF PREMIUM MEMBER
My latest quest: to complete a high quality Jack Sparrow costume by the 18th of February 2012. Our parish church and school are hosting a fundraising gala (fair) and I've offered several of my other costumes (namely Darth Vader, a Stormtrooper, and possible Boba Fett) to help attract people and to generally interact with people throughout the day. I thought Jack would make a great addition and (being a bit more practical an outfit) can help the helmeted guys get around more easily.

Now, as some of you know I'm no newbie when it comes to rush building (6 Star Wars Costumes in 3 Weeks w/ No Budget!" for example) and I've even put together a couple of generic pirate costumes before in a pinch:

The only thing I really have are an MR compass and bananas (plenty of these, as I've been selling them for years through my clothiers site). Here is one brand new, one naturally aged by wear and exposure to sun, and a third which has been soaked in a little bleach:

The next thing I did was to start putting out feelers for who might have things to trade (part of my modus operani is trying to do high quality for little to no money, but doing a lot through trading)... and so far I've managed to get a sash, the rings, a baldric buckle and some embossed pleather to make the baldric (though I would prefer to use genuine leather). I've also got some breeches (they're blue, so I'll have to see if I can dye them to match Jack's).

I have a lot of leather laying around, so after doing some research, I made myself a palm glove after a little cutting and sewing:

I'm also doing a run of accurate swords and scabbards, so I should have those done before the date needed, so that's covered too.

So... that's my start. If you've got advice, would like to donate to the cause, or do some trading, shoot me a PM or e-mail.

Tea towel fabric for his gigantic sash! And Simplicity has a great pattern to mod!

Palm glove looks great! If you're into making, I have a pattern for the wristwrap, movies 1-3, haven't studied up on 4.....
It's pretty easy to do......I made mine out of some fuzzy stuff I had on hand, but would recommend you use some black monk cloth if you can find it. It's hefty and has a big fat weave and ravels out nicely for the fringe. Also, never updated the page, but it was later confirmed by someone who worked on the film that the reverse side of the DMC/AWE wristwrap actually is the CotBP wristwrap pattern.

There's a palm glove pattern on there also, but you already got that done. It's real easy to custom fit it to your own hand, if anyone else out there is looking to make one.

At first he thought the belt's were pieced, but could not find any signs of a seam, just the pattern changes, no cut. Following the embossed design on the baldric, the belts map out as four pieces on the vinyl. He is sure that they were not cut like that though, that on the leather with the pattern change they were most probably cut one long belt, one short belt and the frog. 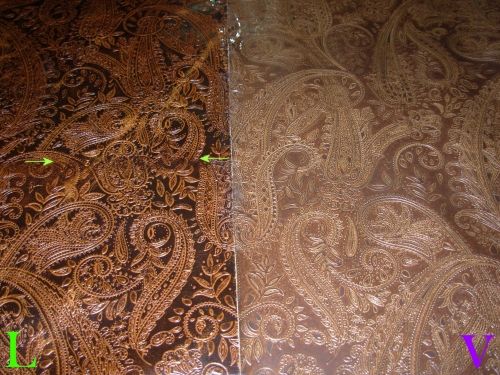 So, I am hoping after the holidays to get some good pics of the leather hide in its entirety to see if there is at least ONE SA baldric to be had on it! Andy has mapped out several from DMC/AWE/OST.

So, said all that, to say that if you have some of the embossed vinyl, you can map out the belts and frog on it using Andy's pix, then reverse them---because the vinyl is mirror image to the leather--and you will at least then have an SA pattern shape for your baldric and frog.
Confessions of a Jackaholic / Baldric--Mapping the embossed leather pattern

That's some great information and a good resource you posted links too... I'll be sure to make reference to your pattern for the wrist strap!
W

Awww man. you got me all excited for bananas.....all i see are squares of cloth Looks like you've got a good start.

Just got some breeches (blue, so I'll have to redye them), all the rings and an ikea sash. Also bought some yarn today and will get my daughter to make me a wrist wrap.
Last edited: Feb 13, 2013

Headed to the Post Office this afternoon, you should have a baldric buckle and paisley vinyl by next week!

Worked on the breeches... they started out a dark blue like this:

So, instead of buying dye remover (I'm all about cutting costs), I soaked them in about 2 cups of bleach and 8 cups of water for about five minutes. After rinsing them out and line-drying them... they now look like this:

I'm really amazed at how much better they look. Now I'm debating whether to darken them up with some brown dye or just leave them. I really like the worn-grey look they are now.

Well... I just pulled the trigger on some Caboots (they were VERY helpful with communication) and should have a Yordreem wig set on its way next week. So... that's

I have boots available, in chocolate brown leather from Caboots, but I see you no longer need them.

I wear a 10.5 so they wouldn't have worked anyway. (For those who might fit his boots: http://www.therpf.com/f13/captain-jack-sparrow-boots-caboots-chocolate-brown-size-10-a-128862/)

I got those breeches in a trade, so I'm not 100% sure, but I think they are costumebase, yes.

Ok, can you tell me anything about the quality and the size... Costumebase is in Asia, and I've heard, that the size is smaller than normal US size...

I thought about to get a coat, change the buttons, and use it then as my normal sparrow coat, but I worry about the size, and some people say, that the fabric is not very good...

I was actually impressed with the quality, compared to what I imaging other costumebase stuff looks like. But... in regards to sizing, that is weird! The pair I have are supposed to be 33/34 (which may be correct for the actual waist measurement, but the thighs and seat are fairly snug and the rise is REALLY short compared to what they should be. I'm not overly concerned since the sash and belts cover up this part, but they aren't the most comfortable pair of pants to wear (especially since I'm used to more period high-rise trousers).

Thanks... I gues I have to check it out by myself with the coat...

I have breeches from Empire Worldwide, and I have to say, they're pretty comfortable...

anyway, good luck with your costume...

Next up... the wrist strap. I picked up 50 cents worth of black burlap from a local cloth shop and, using the yarn I had on hand and my daughter's darning needle, we set to weaving. My daughter (11 years old) did about half the work, but then I got impatient and finished it up myself. We only had a pink and off-white yard, but it worked well enough:

Once the needlework was done, I added four vertical rows of stitching add strength and two long horizontal stitching (above and below the yard) to prevent fraying past those points.

I then sprayed the entire cloth with a strong, black coffee mixture (the same I use for aging my document props):

Lastly, I set to fraying the edges. Once that was done, I used black shoe polish to darken the yard further, especially the parts that would tie at the ends. I also added a little baby powder to give the black parts a dustier look. Unfortunately, most of this doesn't show up in the photo, but this will give you an idea of the final product:

I've had the MR skull ring for years and recently acquired the other three MR rings through a trade. Luckily, both the Dragon Ring and Stolen Ring fit me perfectly on the correct fingers. The Flower Ring is a little loose (no biggie there) but the Skull Ring was about a full size too small to fit on my right forefinger.

So, I decided to try resizing this myself. I bought a cheap stainless steel ring from the dollar store:

This ring was a bit wider than the Skull ring, so I ground it down to an appropriate width and then, with apprehension, cut the back of the Skull ring:

The next thing I did was taper the edges of the skull ring cut ends. I cut the steel ring and tapered those ends as well. All of this was done so far using a table wheel grinder and dremel (but it could have easily all been done with just a dremel):

Next, I test the fit of the extending piece:

I was impatient so, instead of using a two-part epoxy (which would make sense for strength and durability), I super-glued the two pieces together. Again impatiently, I began sanding the joints... but the super glue didn't hold. So, like a madman, I just super-glued it again, this time being more careful with the sanding. I also used the super glue like a filler where the seams didn't quite mesh perfectly. After some more dremel work and then hand sanding, I arrived at the final product:

A $1 ring and elbow grease goes a long way.

Just got confirmation from Caboots that the boots are on their way! Great communication and fast service (so far), so if the boots are what they're supposed to be, I'll be very happy with these guys.

For the waistcoat, I've decided to have my tailors give this a go. If this is successful, I'll be adding this to my site which will allow anyone to order these with a HUGE selection of fabric and color options. I'm going for a silk/linen blend in dark pewter for the front and a wool blend in silver with salmon pinstripe for the back:

Lastly... my first "finished" part of the costume... Jack hands: