Was wondering where to post this, but ended up deciding here would be a better place..

Last Halloween I was Jack skellington in his Santa form.

But I wasn't very pleased with the head, and with such a big impact last year, I wanted to go again. But in his normal black suit. And If I was to go again, I would want a really nice looking head...

Here are some pictures I took of Jack's head, It was a 12"? acrylic globe, a replacement for those outdoor lamps.. with a big hole cut out for the mouth, a hard hat mounted and some foam eyebrows. Jack Skellington Head - Imgur

I wanted the head sculpted this year, to bring out details the other head lacked.. But I lack the skills to sculpt it.. The old head also broke even before Halloween night last year, I had to get some tape to quickly patch it back together to be usable.. Does anyone know who I should talk to, to get a head sculpted? Someone who won't charge an arm and a leg that is..

Also, If anyone knows a pattern or something for Jacks suit, Let me know. The pants are pretty straight forward.

I hope this is the right place for this post. Have been up way too long to think of a better place. If it's not then I'm sorry! Thanks for any help in advance. I really appreciate it.

RPF PREMIUM MEMBER
Have you searched in the forum for the head file. Could be there...GM

RPF PREMIUM MEMBER
Here's a Jack Skellington head .PDO that I have; not my model, for the life of me I can't remember where I pulled it from. I believe I originally unfolded it with Jack's head being about 24" across. The scale can be changed in Pepakura Designer, if you don't have the software I can send the file to you rescaled to a different size. 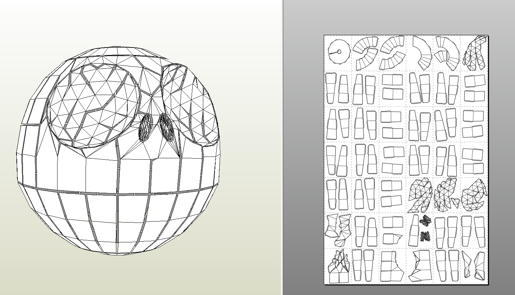 I really need to post my how to on Jack Skellington.... ok for the head, what you can do is take one of those punching balloons, and coat it in layers and layers of cheese cloth soaked in plaster of paris. After it is nice and solid you want to build up the eyebrows and nose. eventually you will take a saw and cut out the eyes, and the mouth in. For his suit I simply took a black blazer and painted stripes on it. I ran out of

time so my stripes are really sketchy.

just reply with any questions, ill try and respond as quiclky as possible. seeing as how halloween is right around the corner.

pepakura Lord Of The Rings files

Wednesday at 4:44 PM
BalforeDelFuego
B

Sunday at 6:08 AM
pennywise