So having a mk3 war machine under my belt I decided a new project was in order something a bit more colourful as the last 2 big builds I've done have been grey, so I've gone for do3d's iron patriot.

Initial impression - Do3d's files are pretty detailed, as part of the package you also get mk2 war machine as well, the difference only really seems to be the chest section but hey, always nice to get 2 for the price of 1


Scaling - Oh dear - this is where it all goes a bit titsup, they haven't included an overall model, all the parts are individual files, in different orientations, so you have to do a lot of messing around importing them all, rotating, flipping etc etc, a total ballache. As I've also found with other do3d files they seem to be based on someone with a very weird body shape, I'm bang on mr middle aged average size, these files seem to be based on a 20 yr old 6ft6 world class body builder, with a tiny head.

due to issues scaling the thing I've had a few useless prints trying to keep the proportions in sync just doesn't work so I've had to use different setting x, y and z and different settings per part. I've no idea how its going to end up looking

I've also tried to scale it so I can actually move in it, in my war machine movement is pretty limited, I cant, for instance, touch my head with the arms on, which makes putting the helmet on (and taking it off) impossible.

For the tech heads 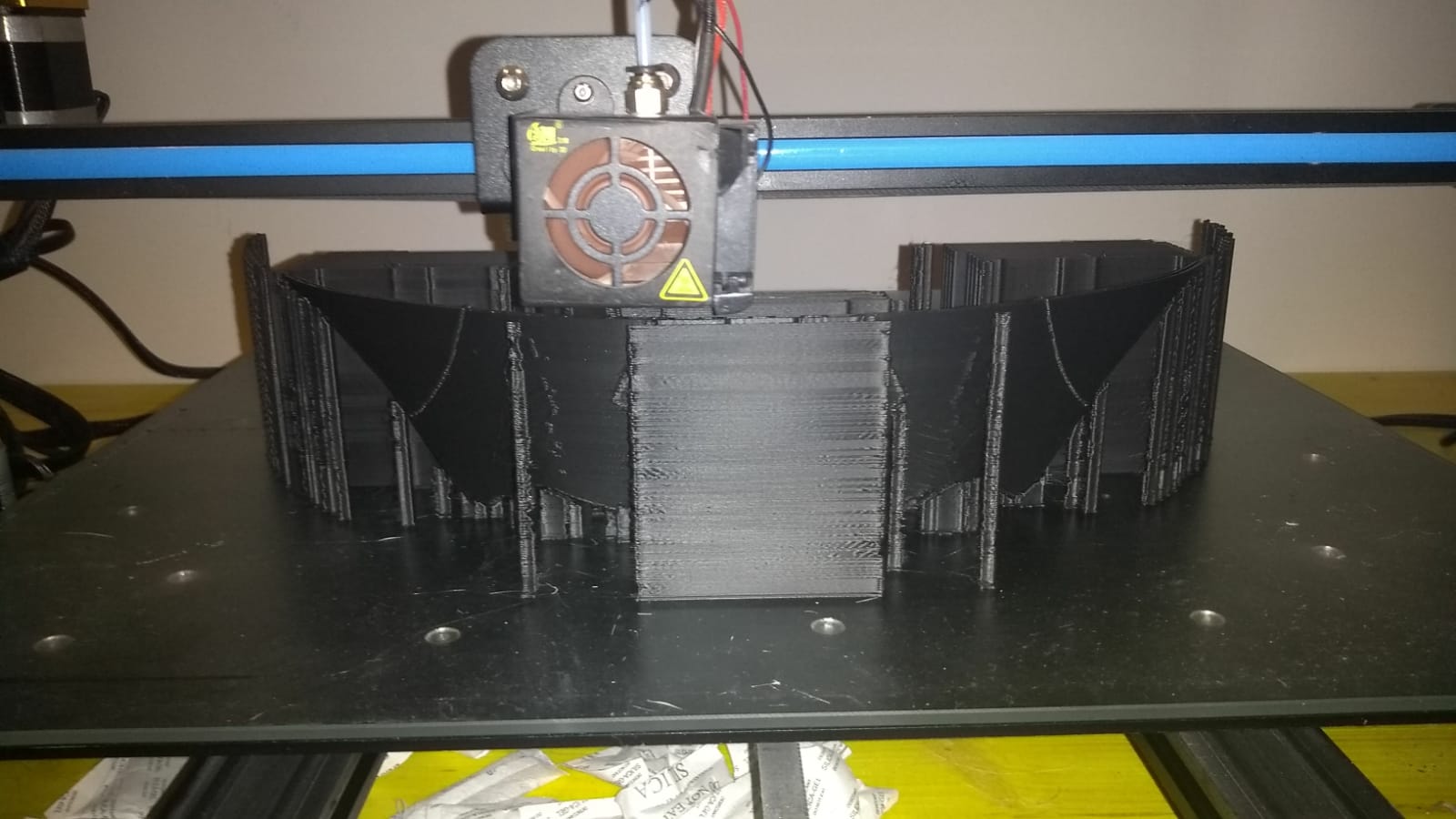 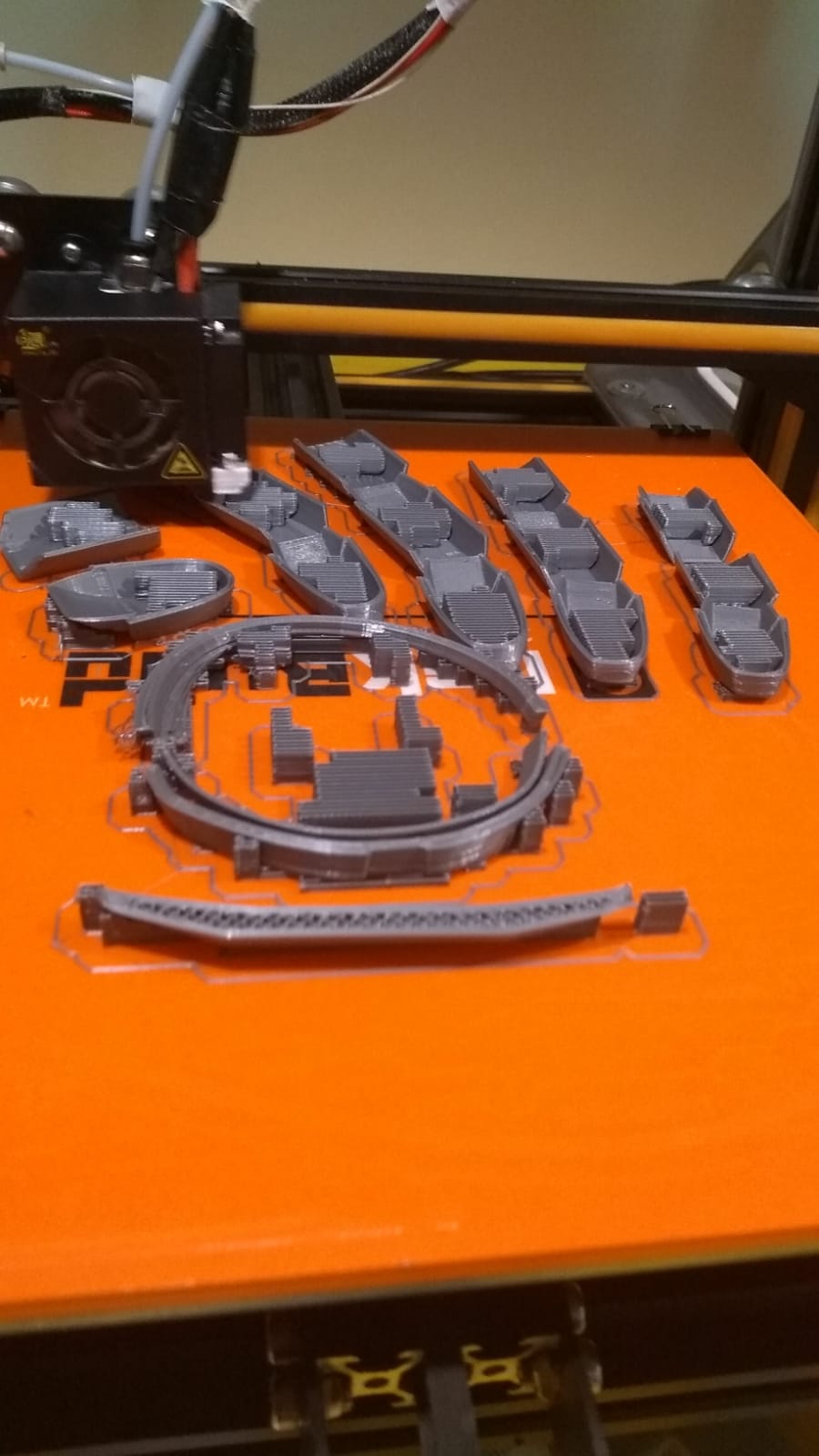 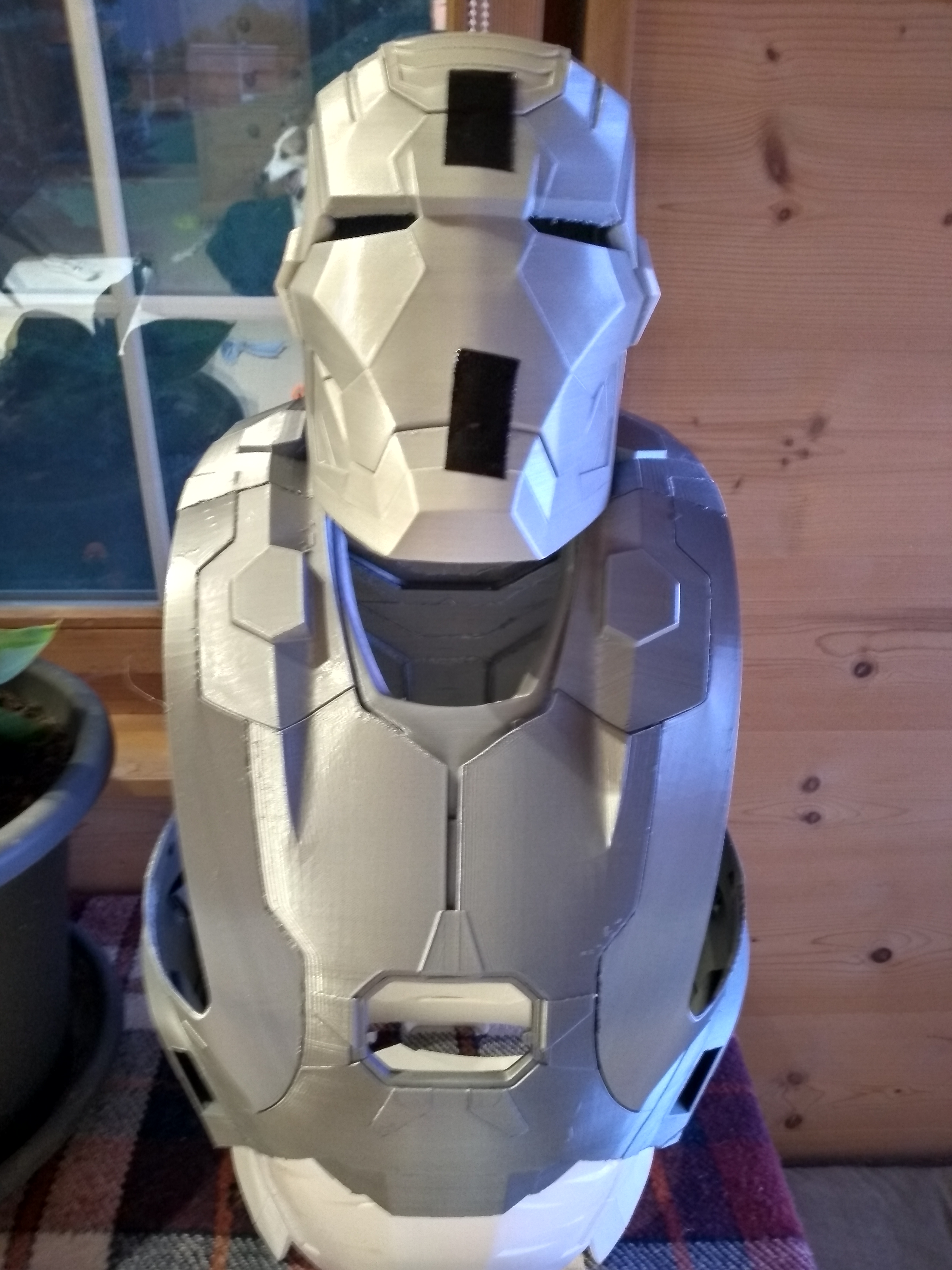 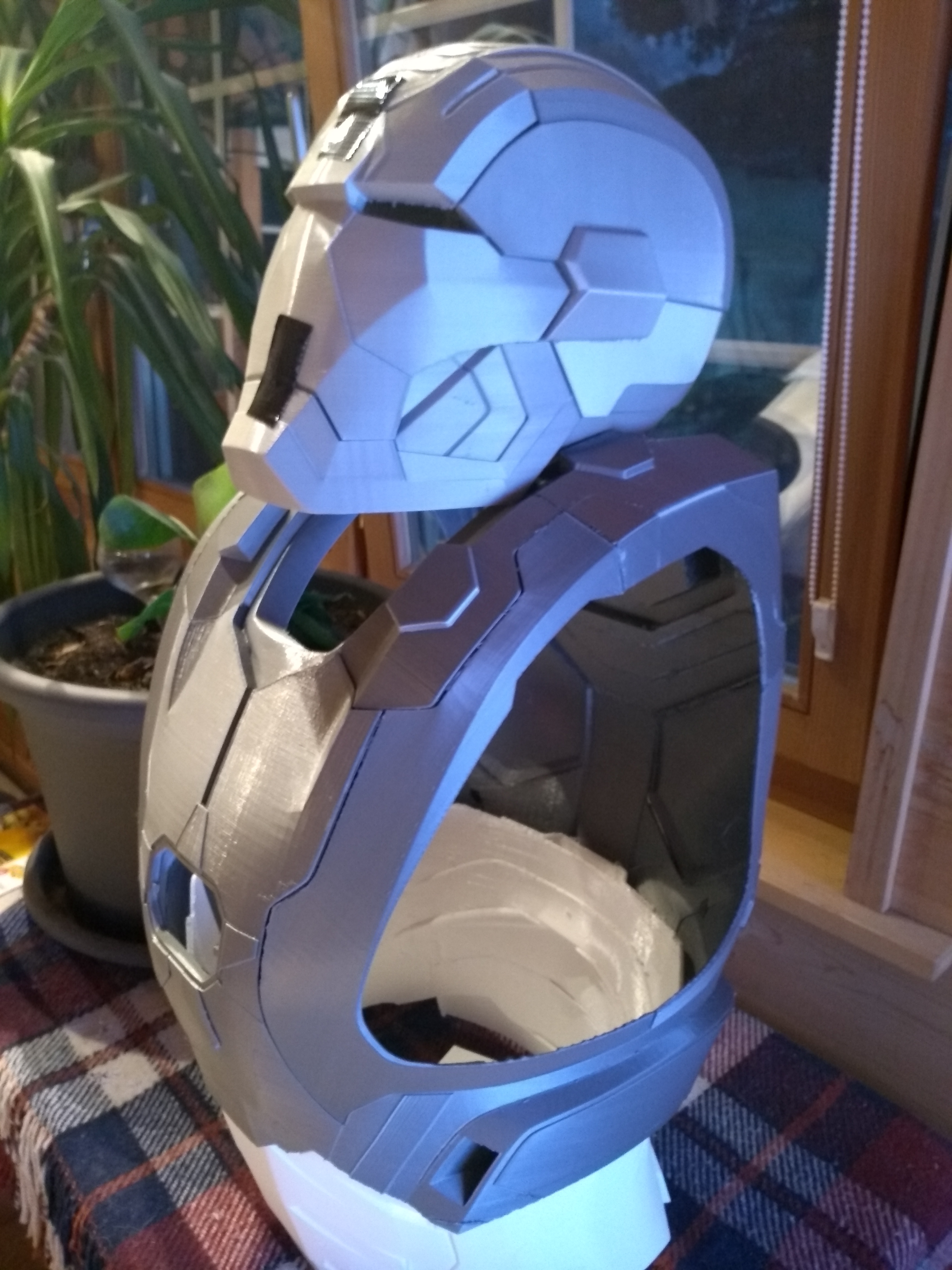 The helmet is quite nicely done, a little thin at the bottom 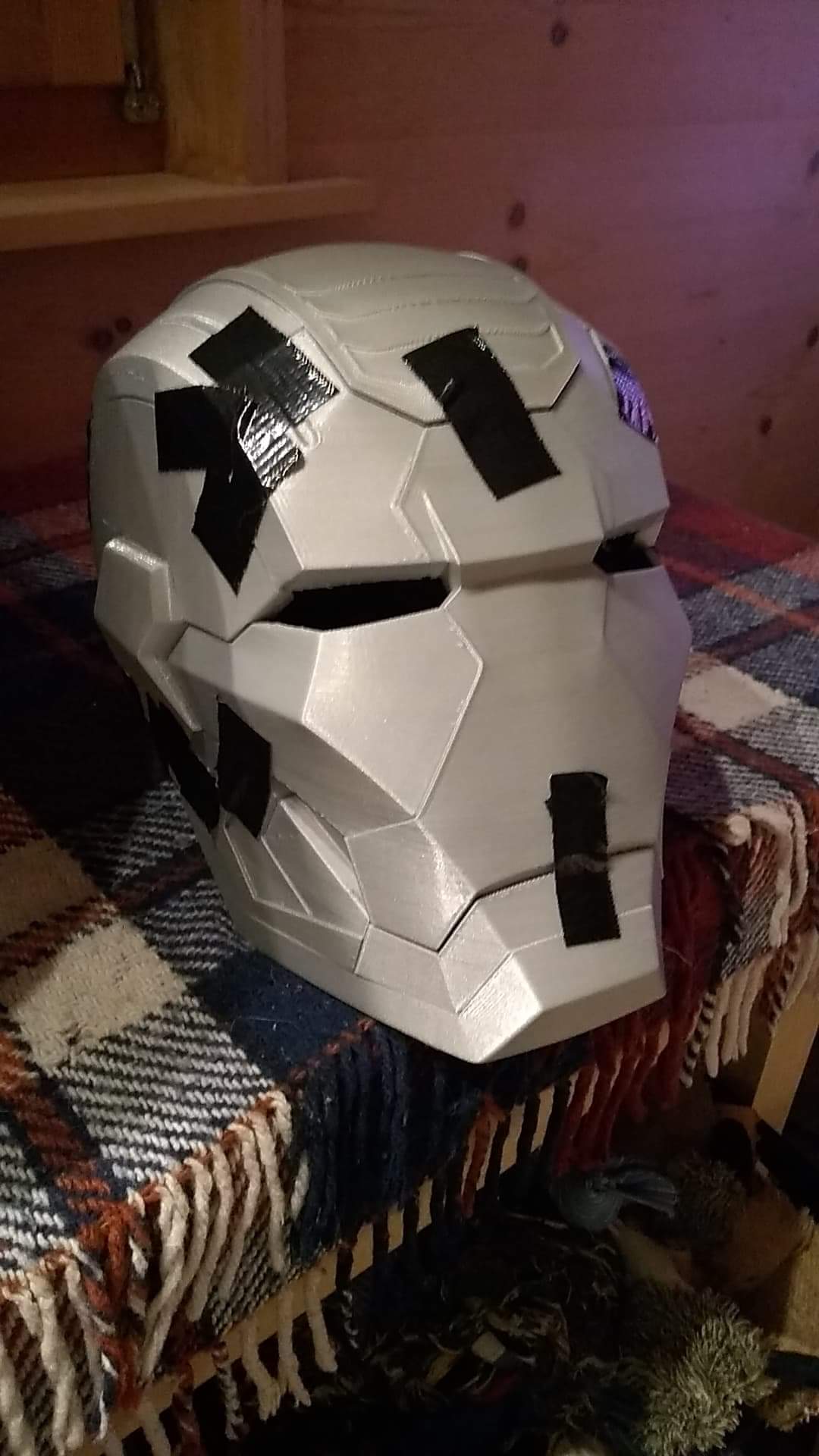 Talking of thin, I printed the cannon :angry parts of it are paper thin, thats 60 hours down the toilet, totally unusable, they also seem to 'forgotten' a piece, its in 2 files but they have no way to join together. I have the impression I am the first person to try to print these files, a bit annoying that do3d seem to let their customers to the QA. They have sent me some replacement files, so we'll see how those go. 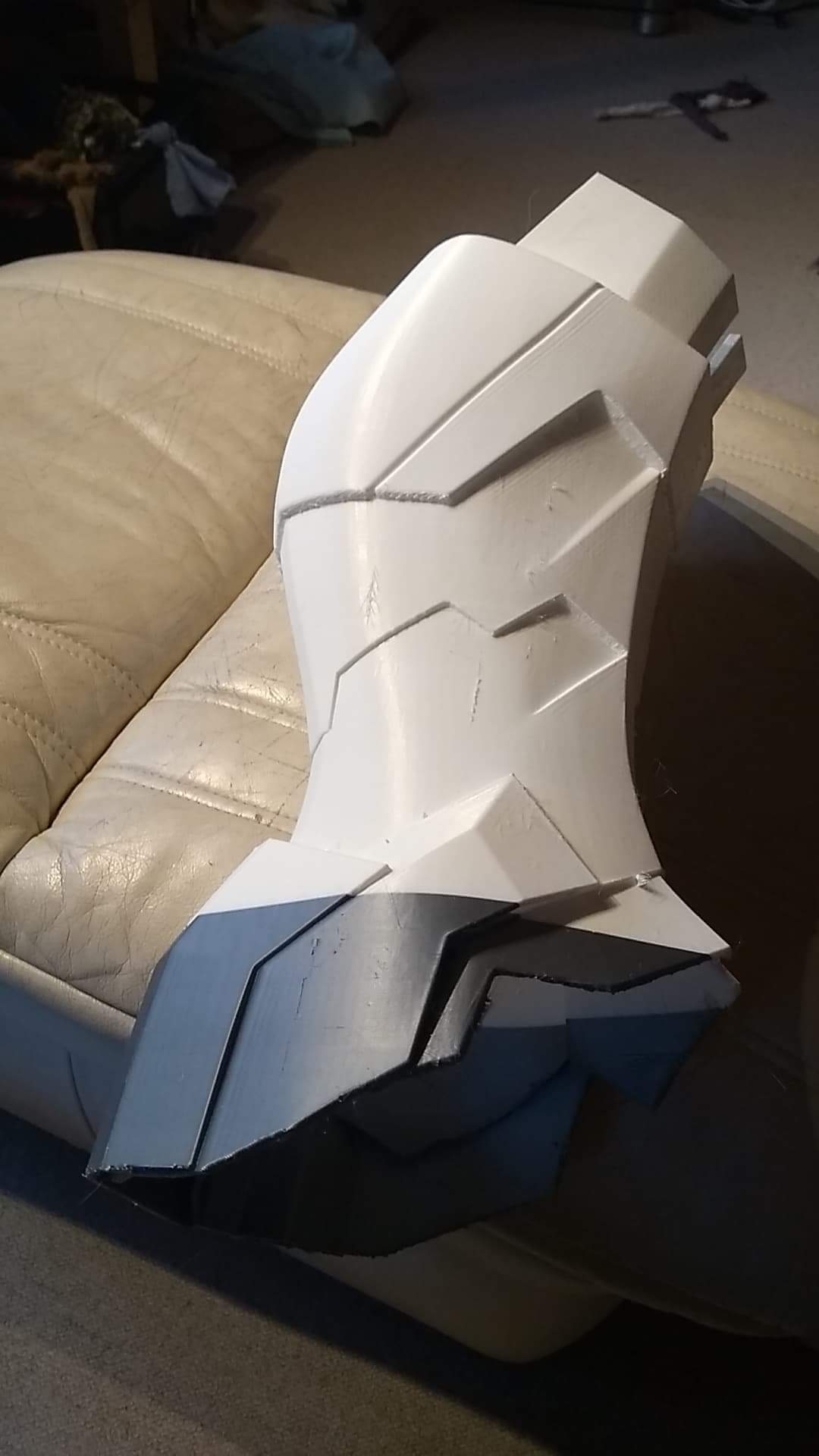 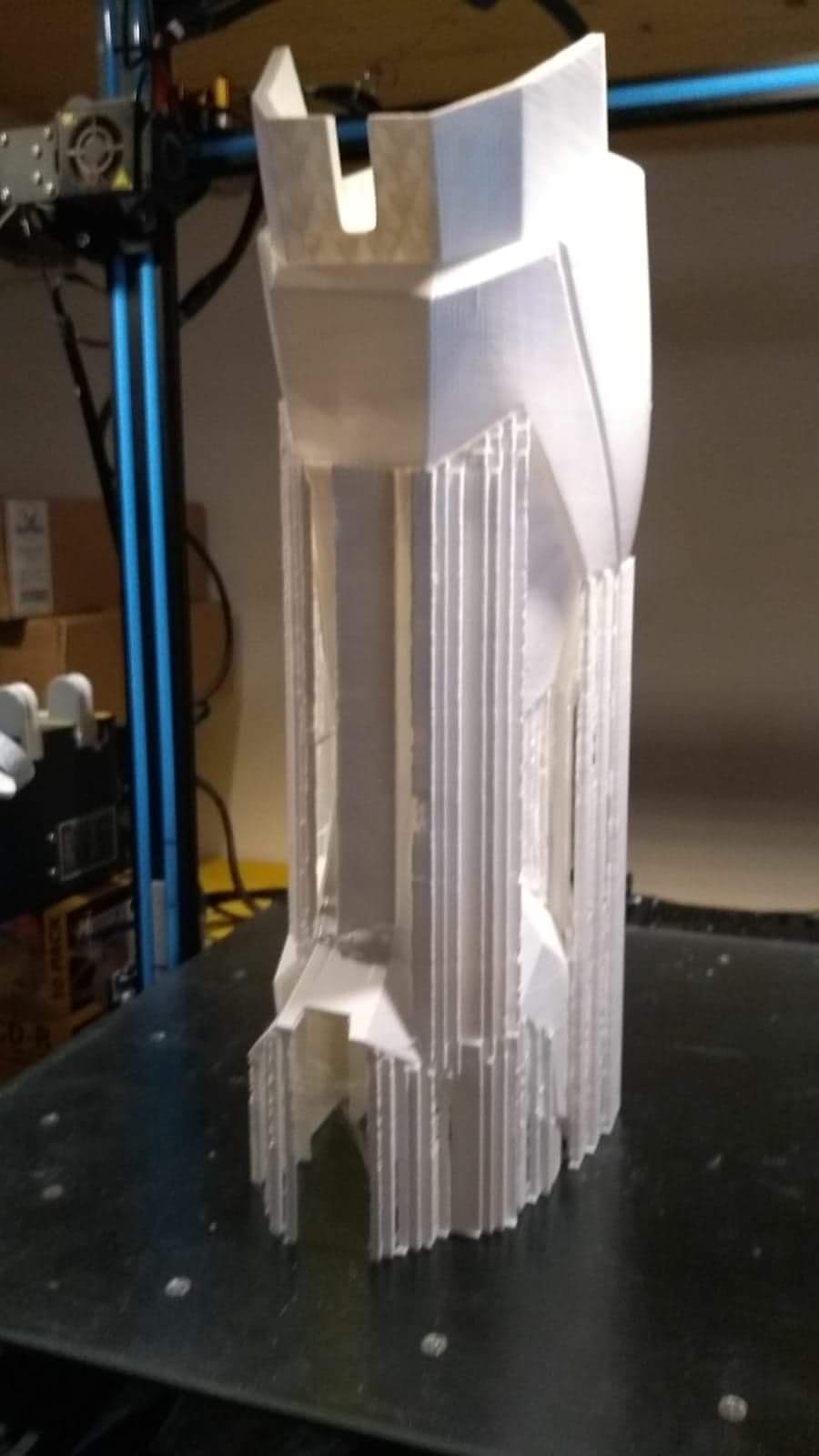 Open this up in Win10's '3d builder' ,divide the entire figure into separate body parts,and then scale them in Pepakura Designer 4 to match your dimensions.In addition,increase fluency of polygons (of the 3d model) in 3d builder as well.
That's how I do it.I hope that helps !

I've been using make human and another paid app, can't remember the name now, but both have issues creating a representative body shape trying to get the model as small as possible and still fitting has been the main issue, not building enough slack into it.

I know what you mean.Postures as seen in movies and video games are highly exaggerated and rarely useable for cosplay.I found that out the hard way twice.
Some make a ducttape mannequin and base their costumes off of that,but those lack muscles.
I usually try to tweak the 3d model in pepakura designer so that it matches my own posture,so widen the waist in all directions for starters.It's time consuming moving all those vertexes,but worth it if you can now make your favorite costume to wear.
Last edited: Jun 23, 2018

Well its been a while

This print has been 'challenging' shall we say, its obvious no one has printed these files before and I've had a bit of toing and froing with do3d to fix issues with them, the gun for instance was paper thin and also missing a way to connect the top to bottom.

They have also not been designed with printing or wearing in mind, so I've had to do some pretty big mods to 1. get the thing to print, 2. get it so you can actually put it on

lets just say my patients with do3d is wearing pretty thin!! (sorry guys, I love your designs but PLEASE stop using your paying customers to do your quality control!! if you spent as much time checking the files as you did adding serial numbers and your logos all over them they would be ace) 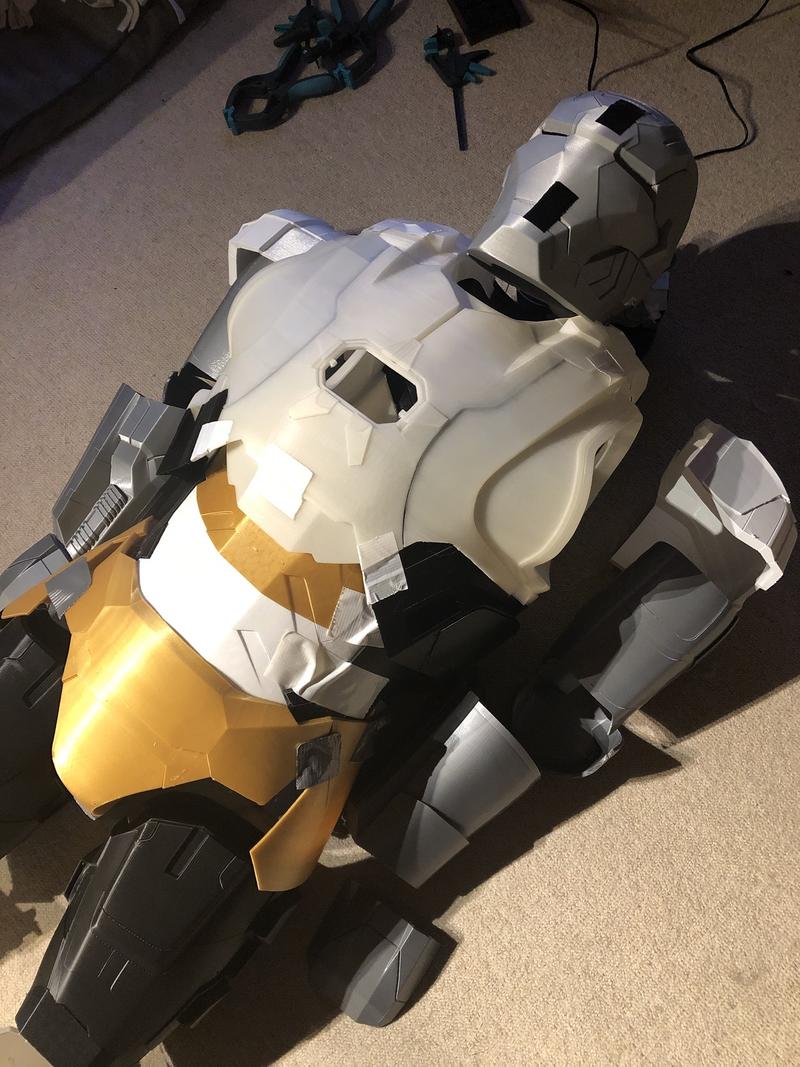 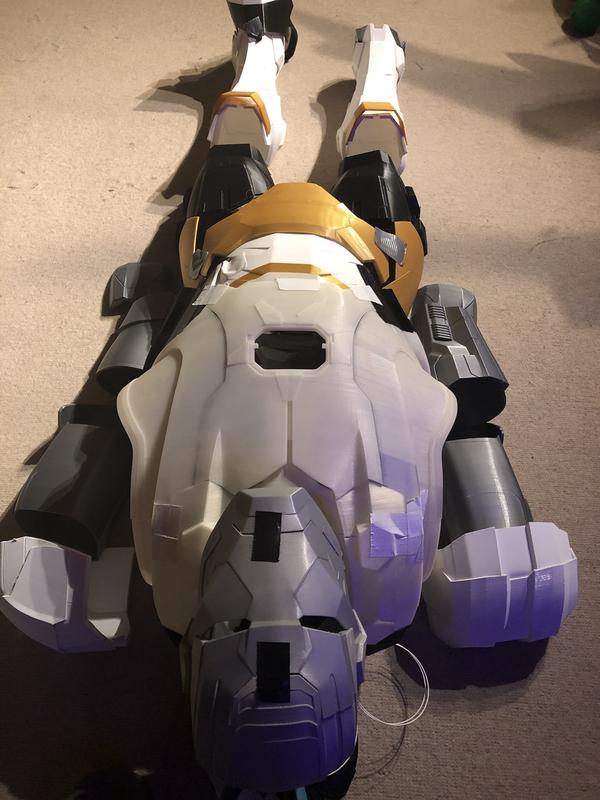 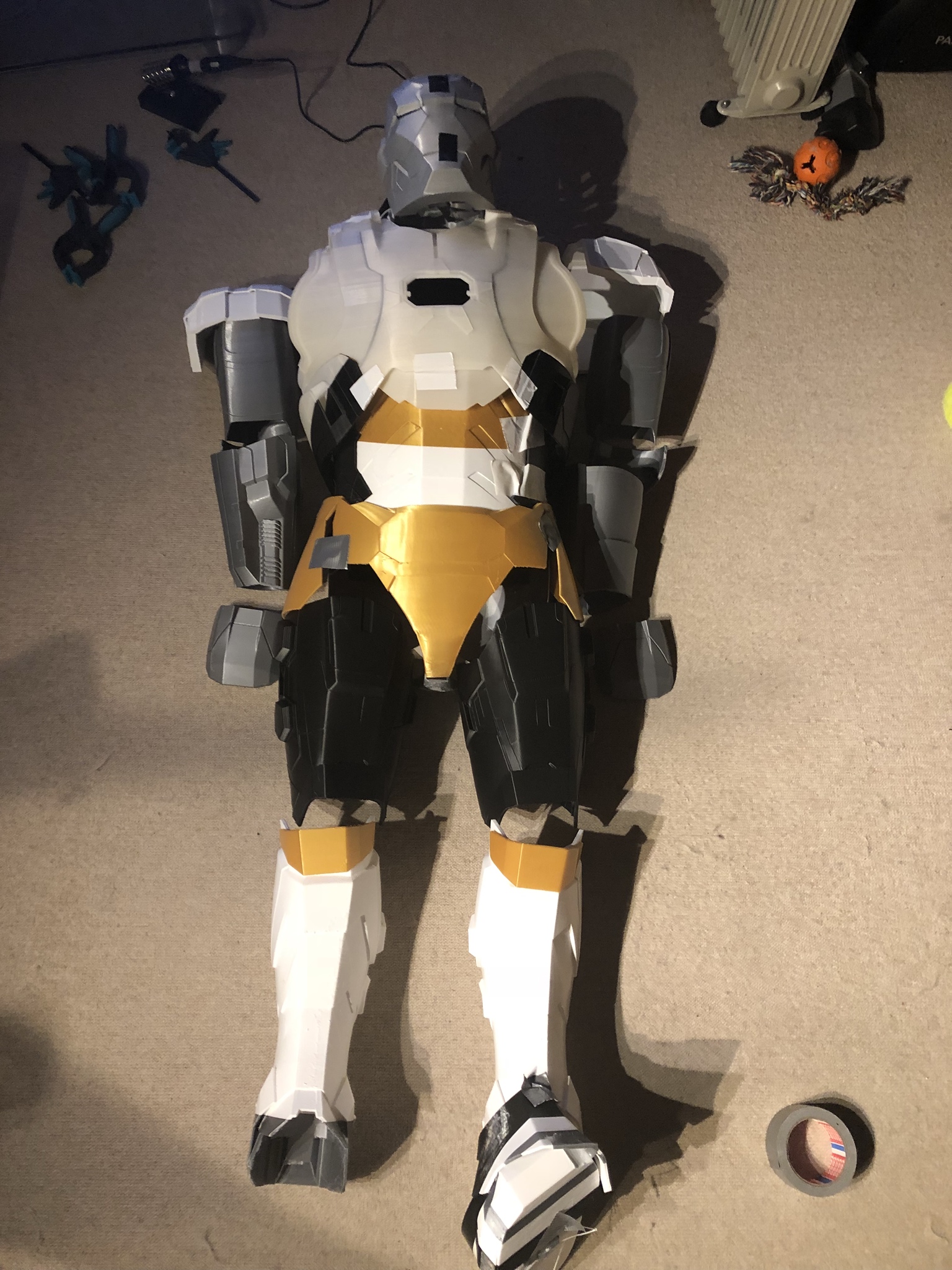 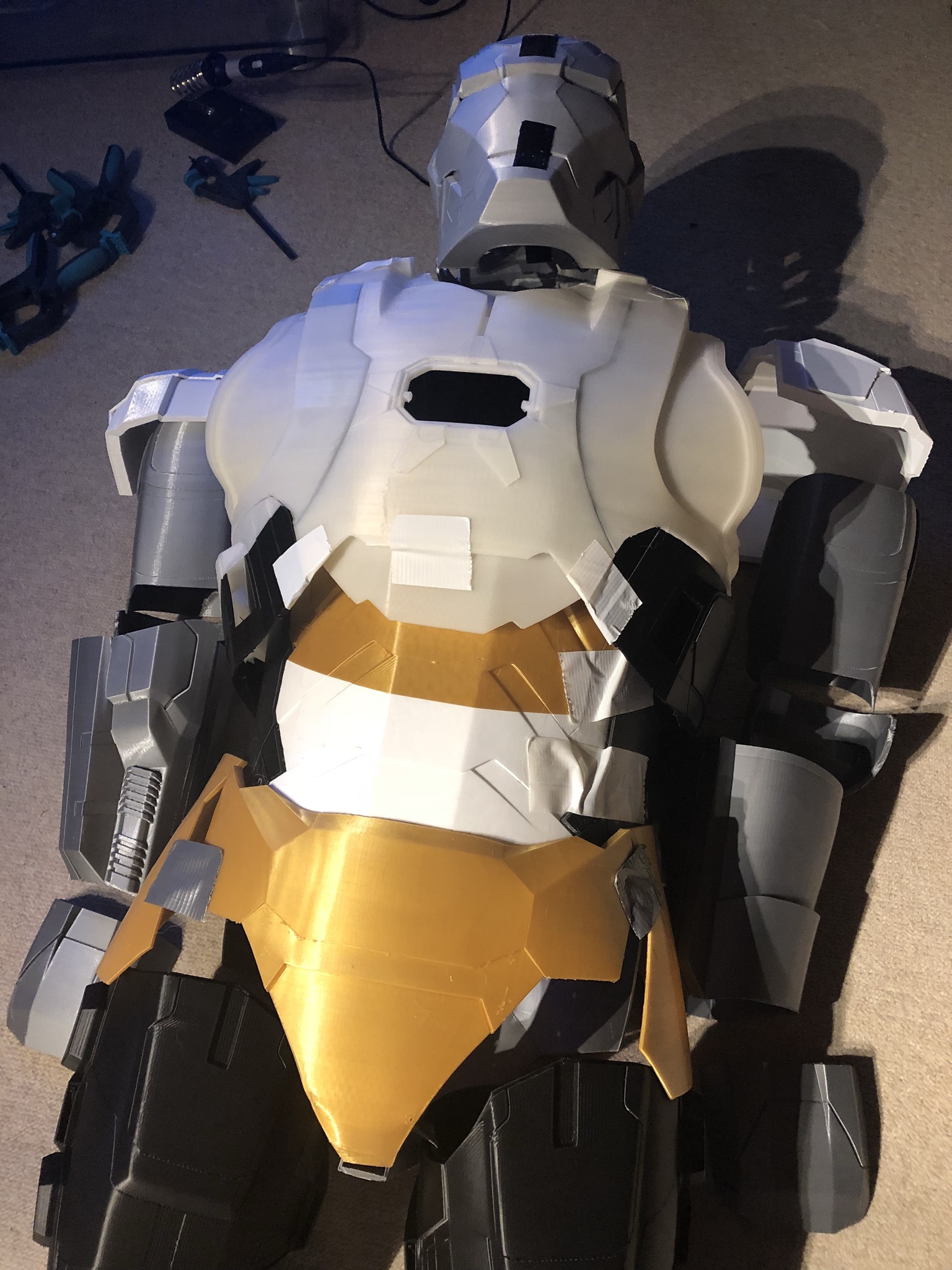 That looks great! My own printer has a volume of 120mm cubed and a max speed of 55mm/s, so printing an entire suit is out of the question for me. Any estimate how long it took to do the printing?

I've been printing other things while this has been going, but its not been that long a print to be honest, would have been a lot quicker without the 3 failed chests maybe 2 months constant printing on 2 printers.

started the long job of sanding and painting

This is after an initial wet sand using 100 grit wet and dry, the a spray over with filler primer and then filling the worst issues with 1k car body filler, another wet sand with 400 grit and another coat of filler primer 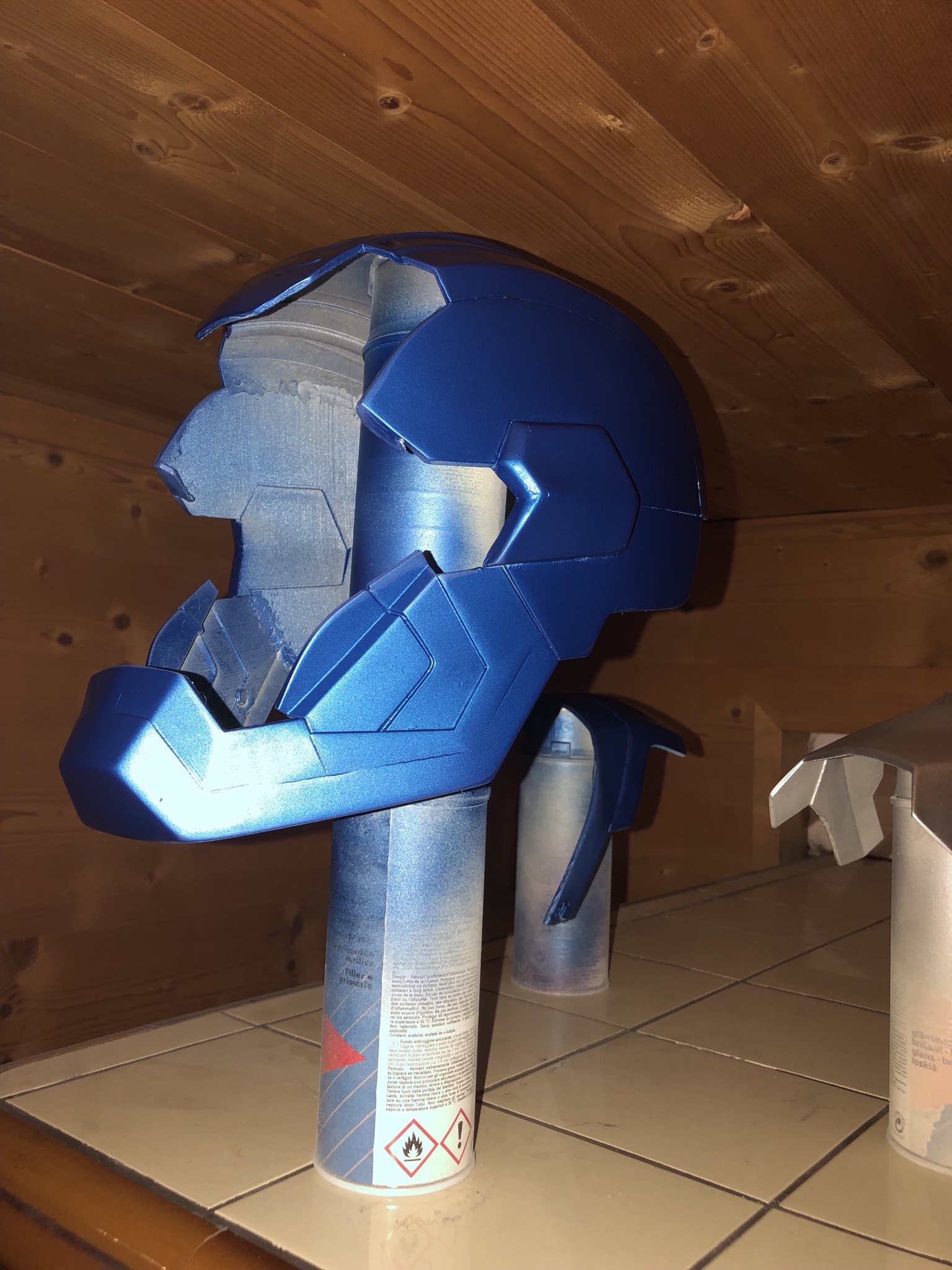 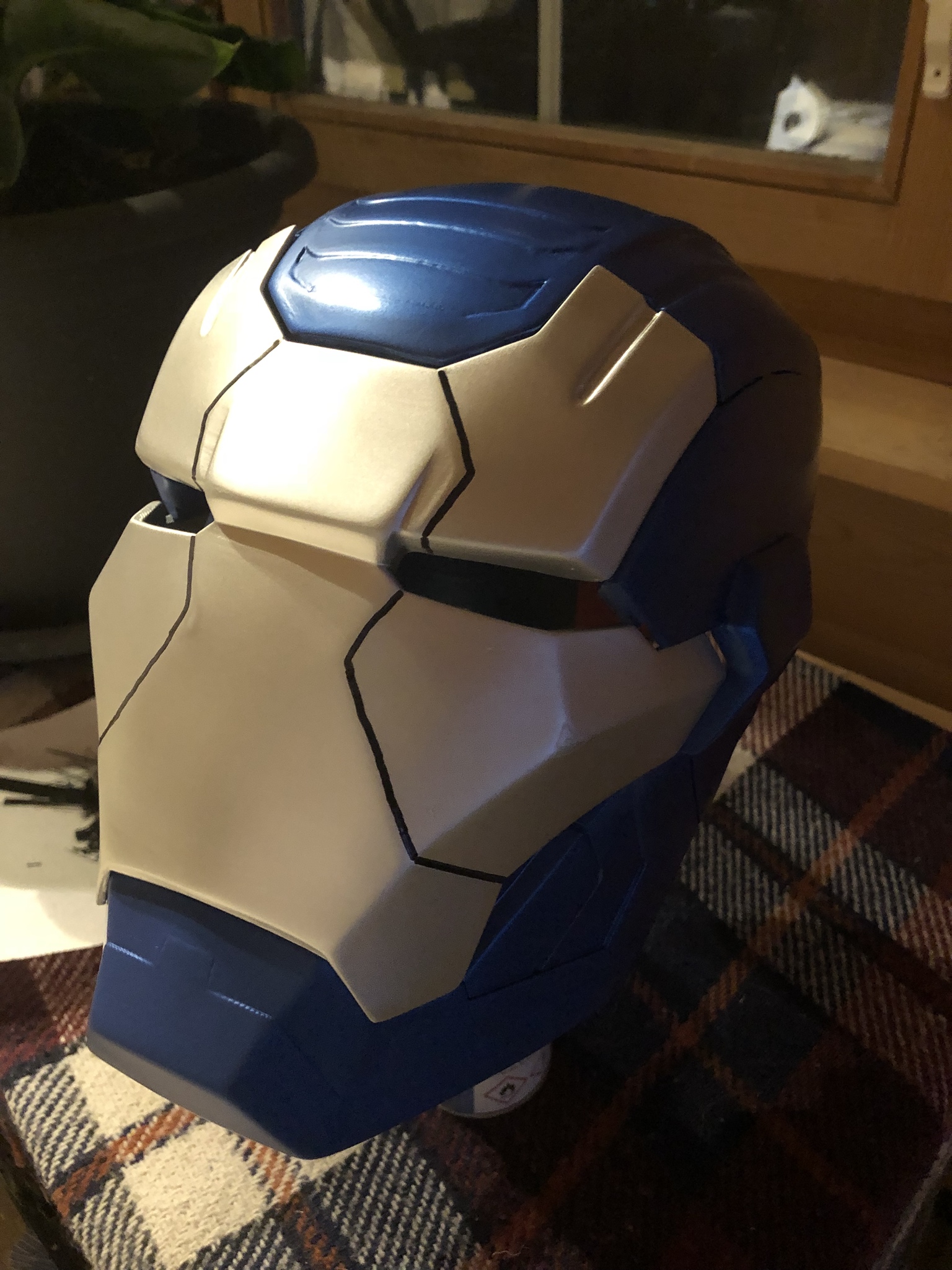 did some more painting at the weekend, think the colours are a pretty good match, didn't worry too much about the finish as this is the test helmet, and its not been clear coated.

It became clear while I was taping it up that it has a couple of accuracy issues, fine if you are painting it as a war machine mk2, not so fine as a patriot. 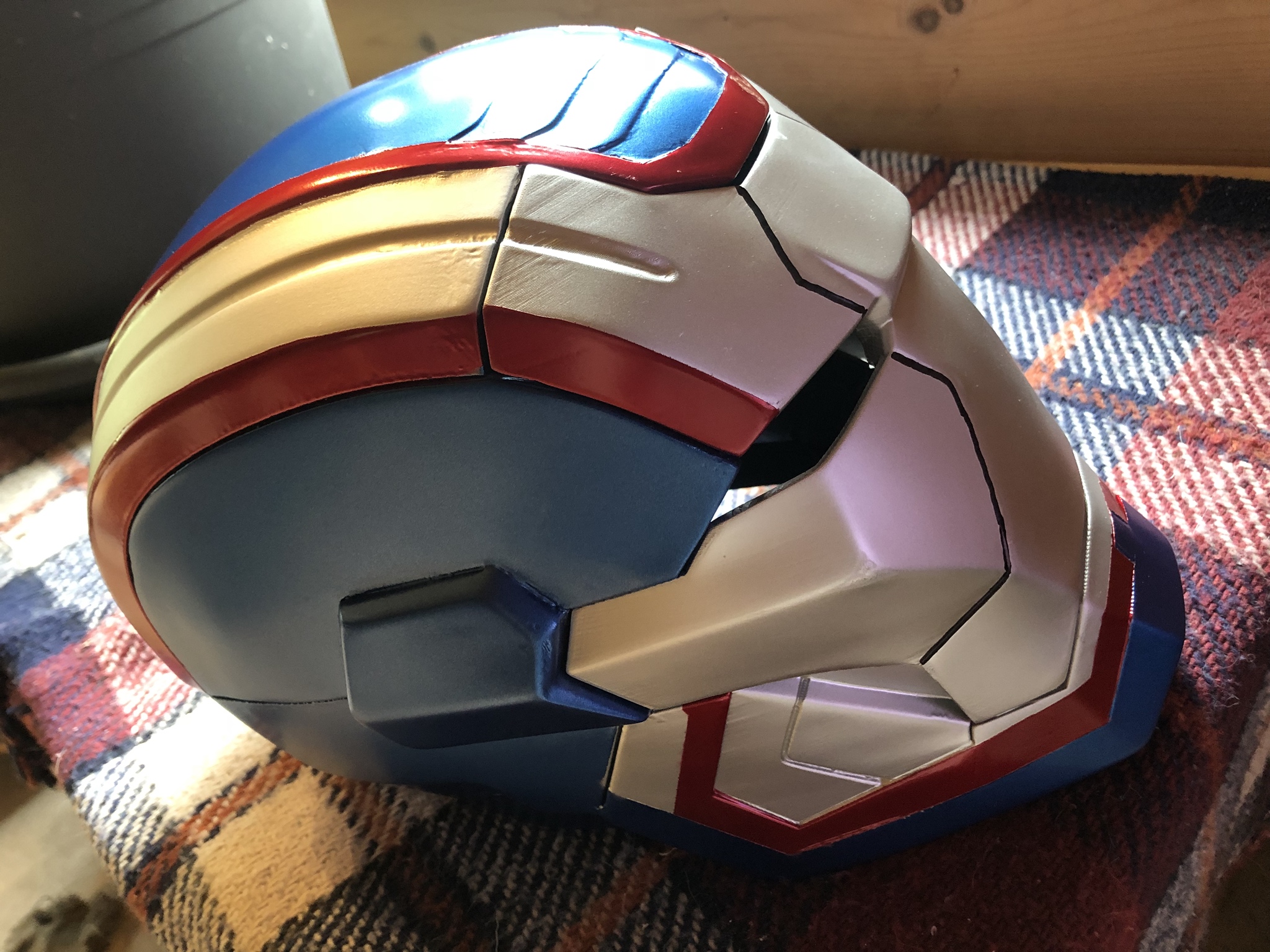 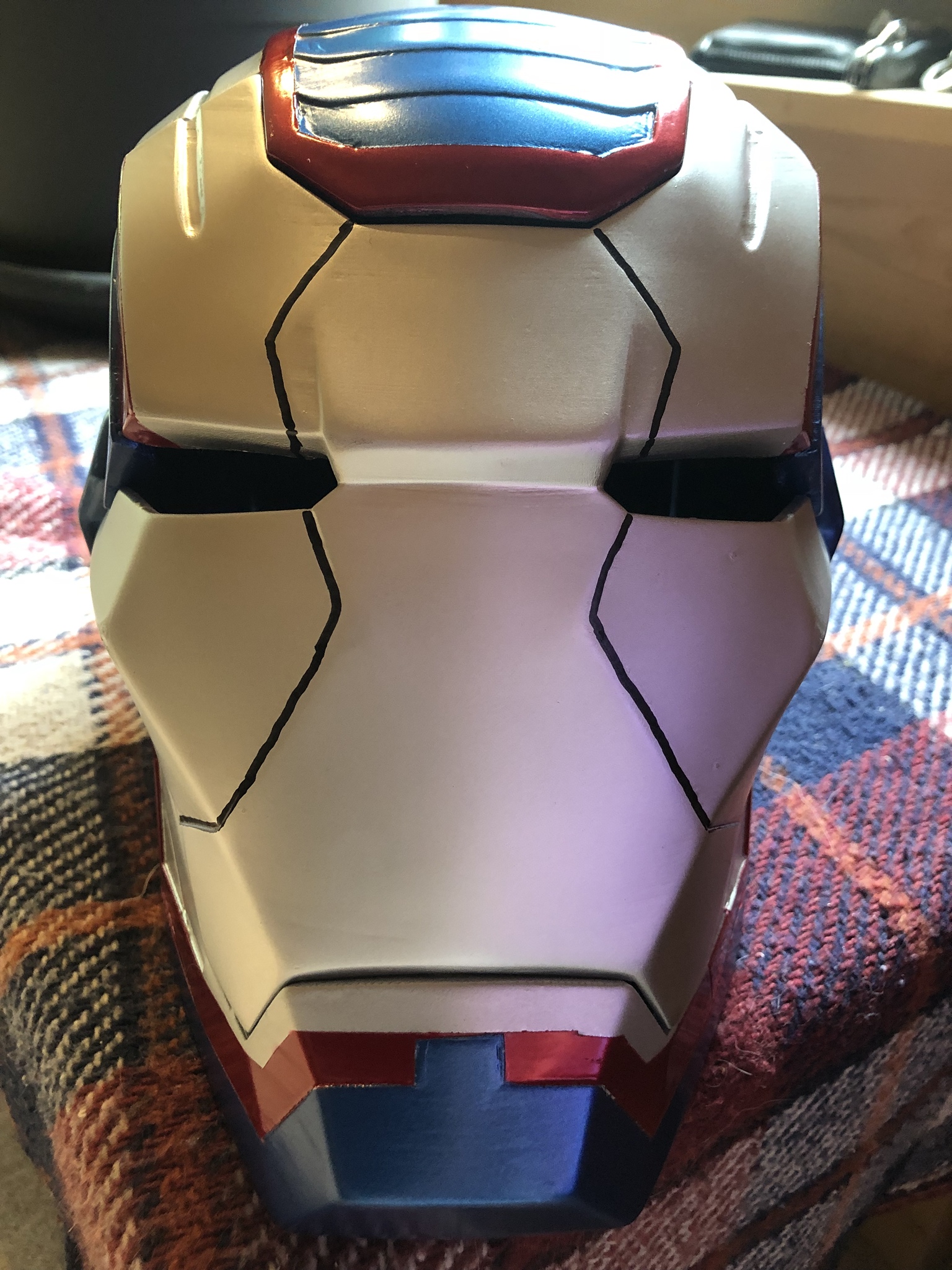 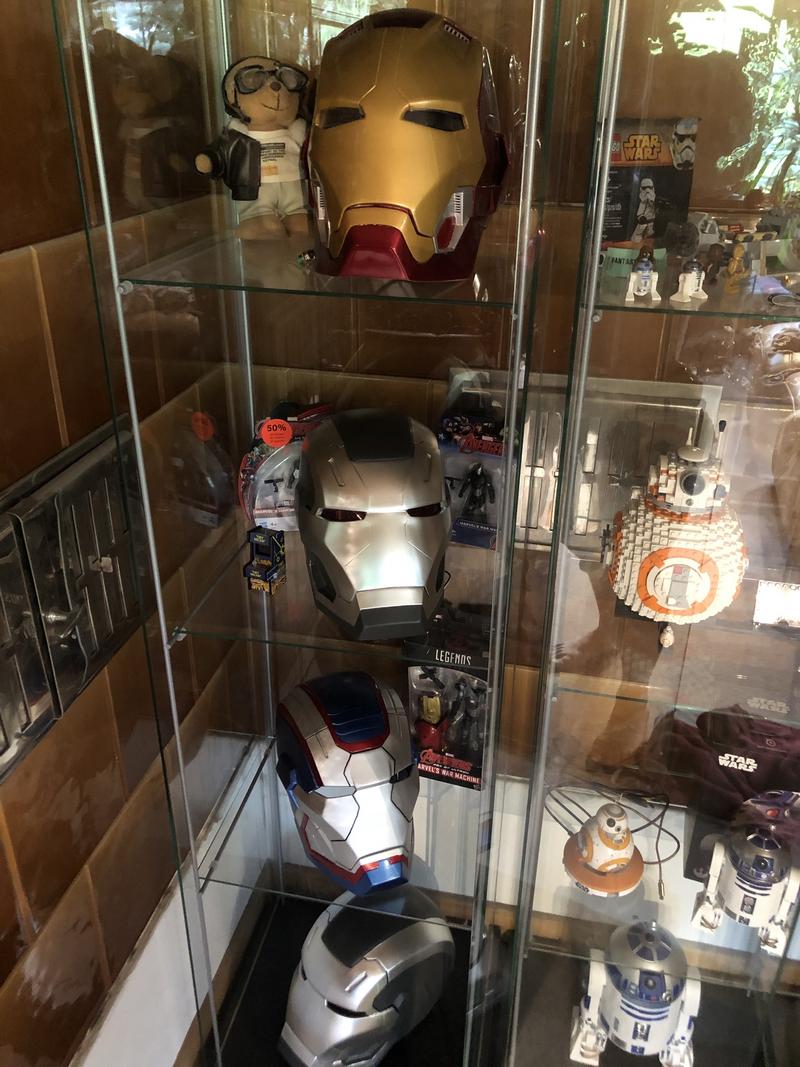 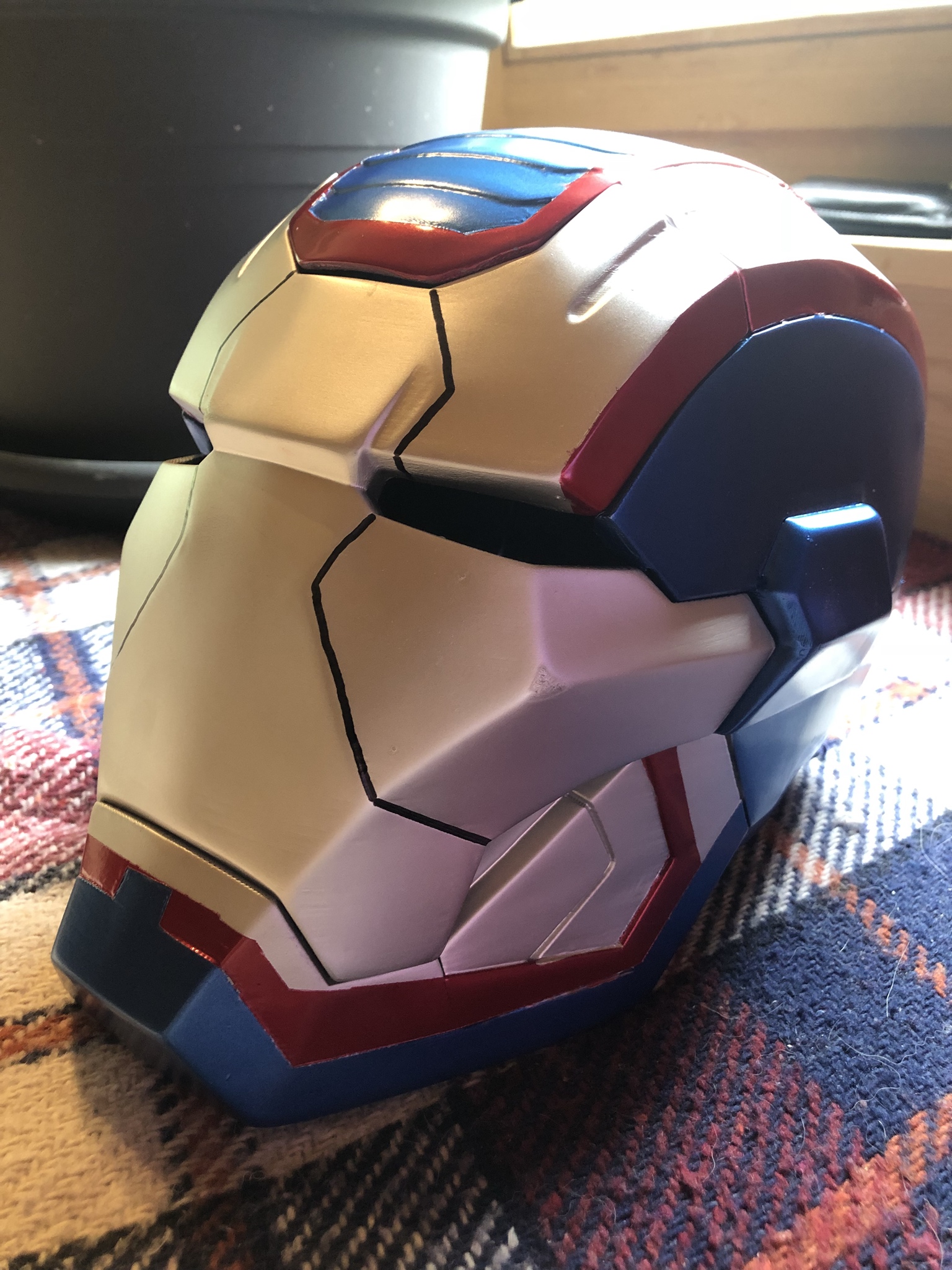 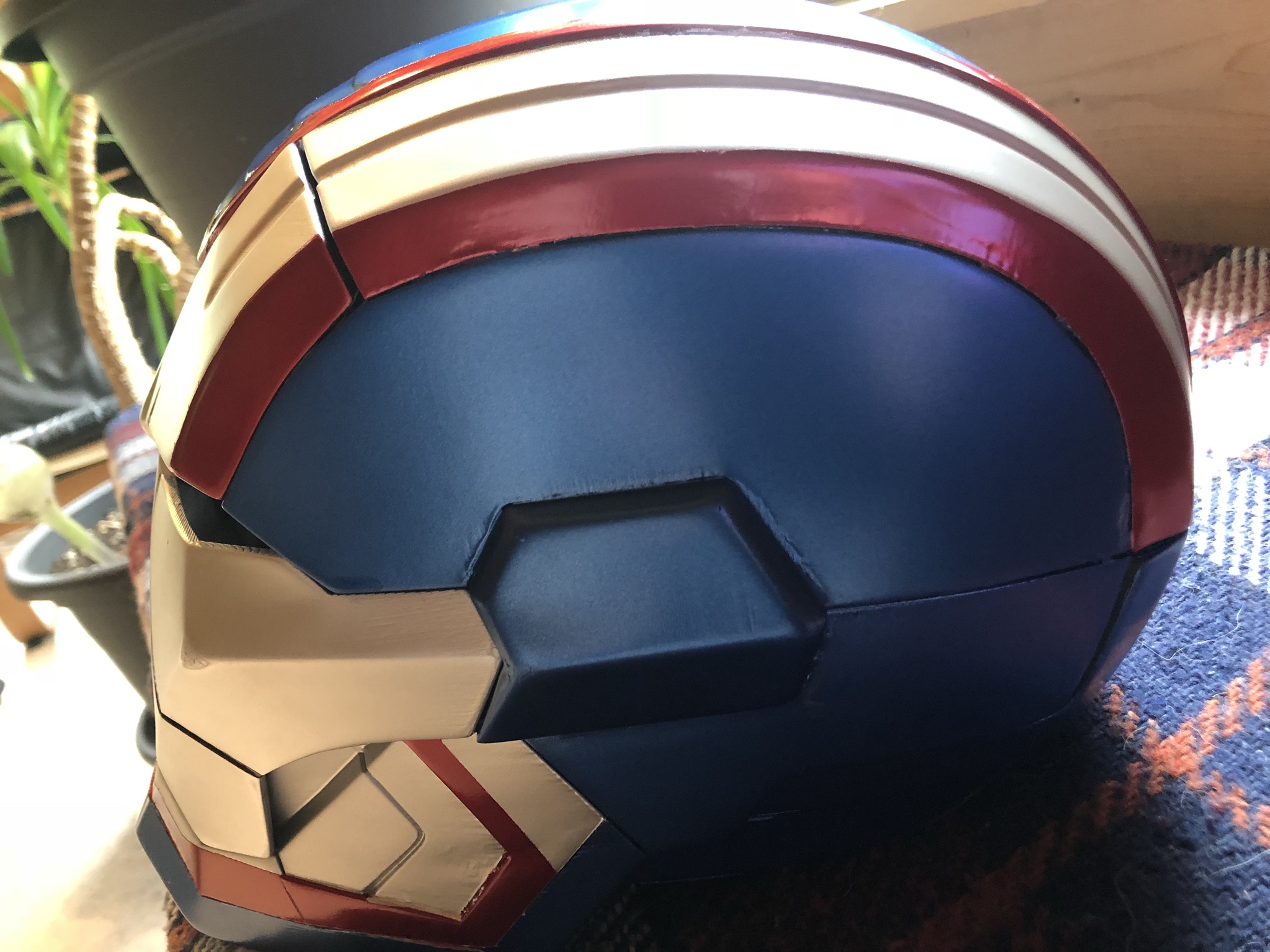 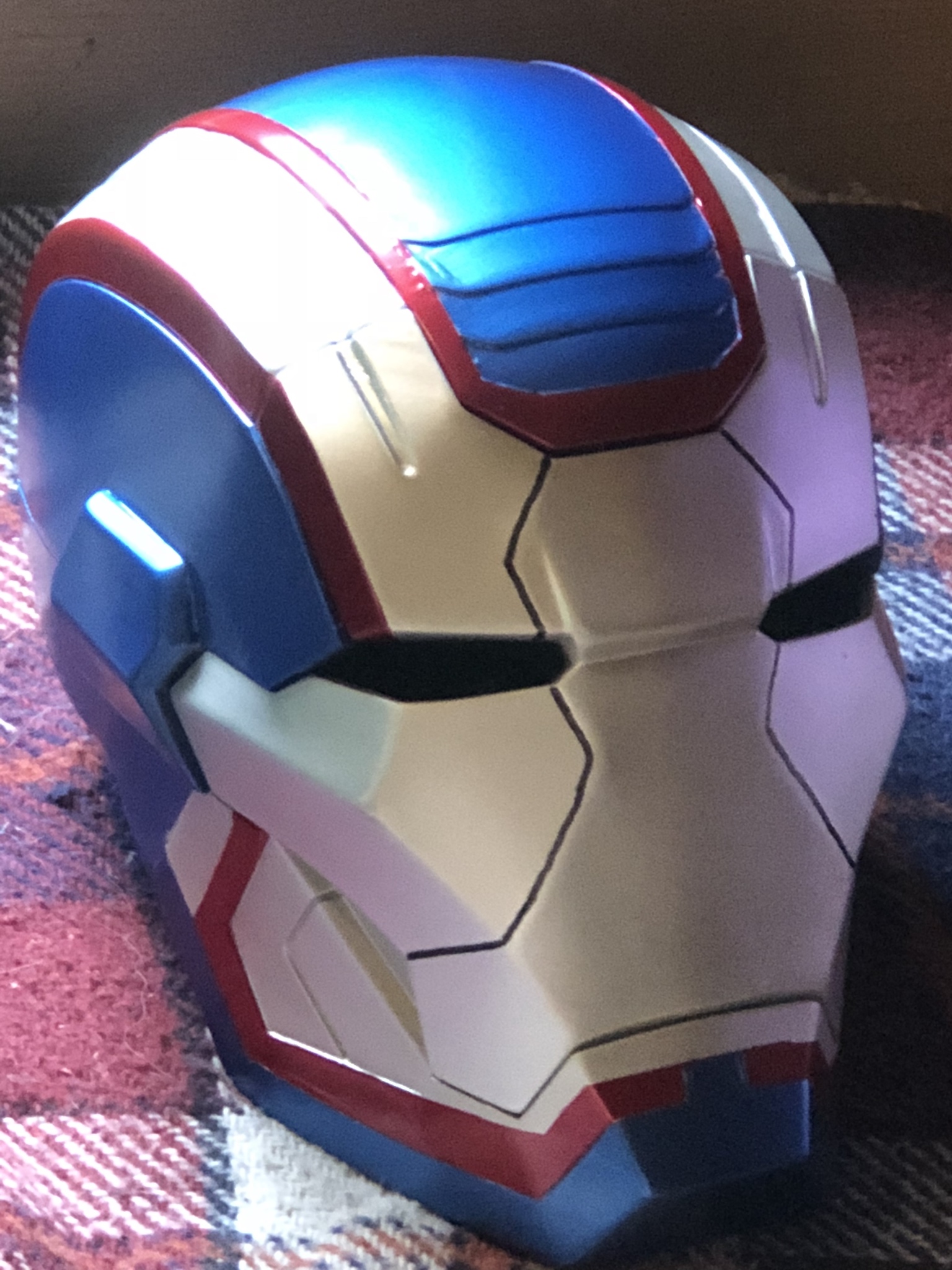 Its been a busy couple of months with events so not had a lot of chance to work on patriot, but had a blitz over the weekend, firstly a pic of my war machine and joel ironman at zurich games show a couple of weeks back 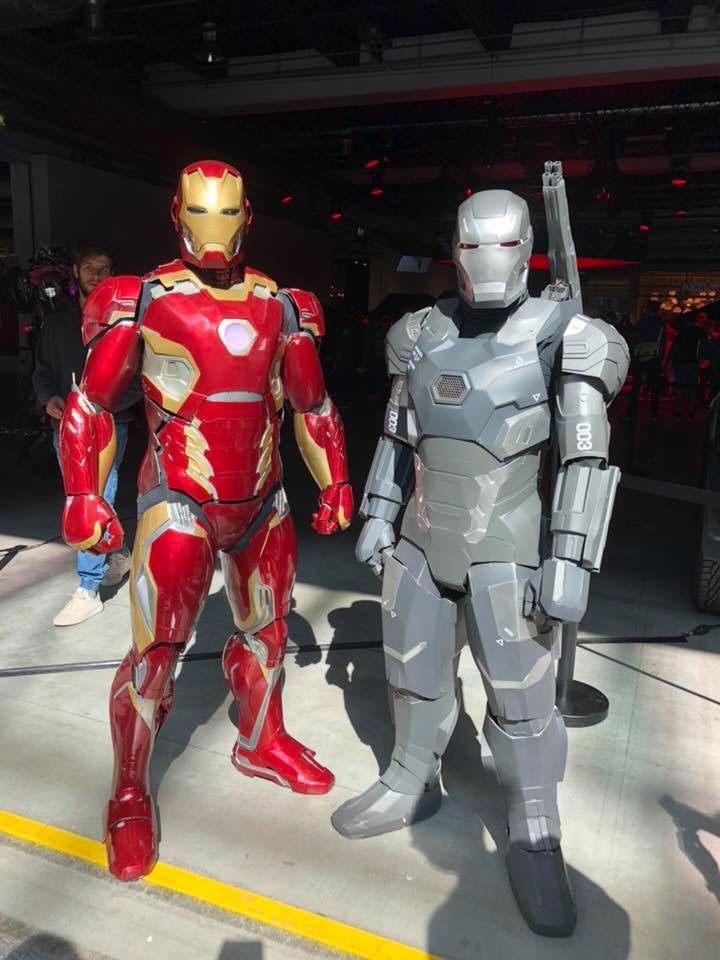 then it was back to sanding, filling, sanding filling 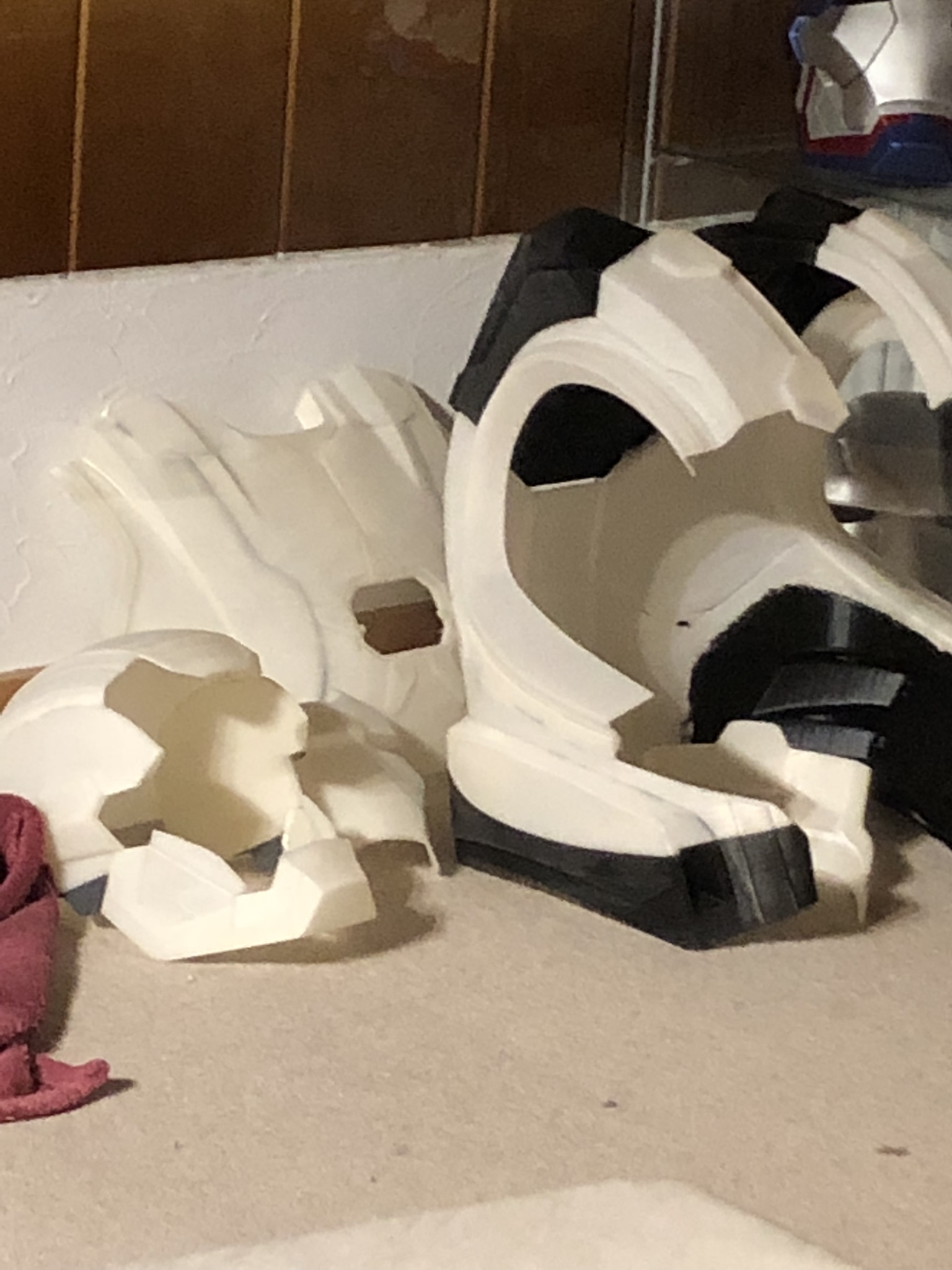 and laying down some paint 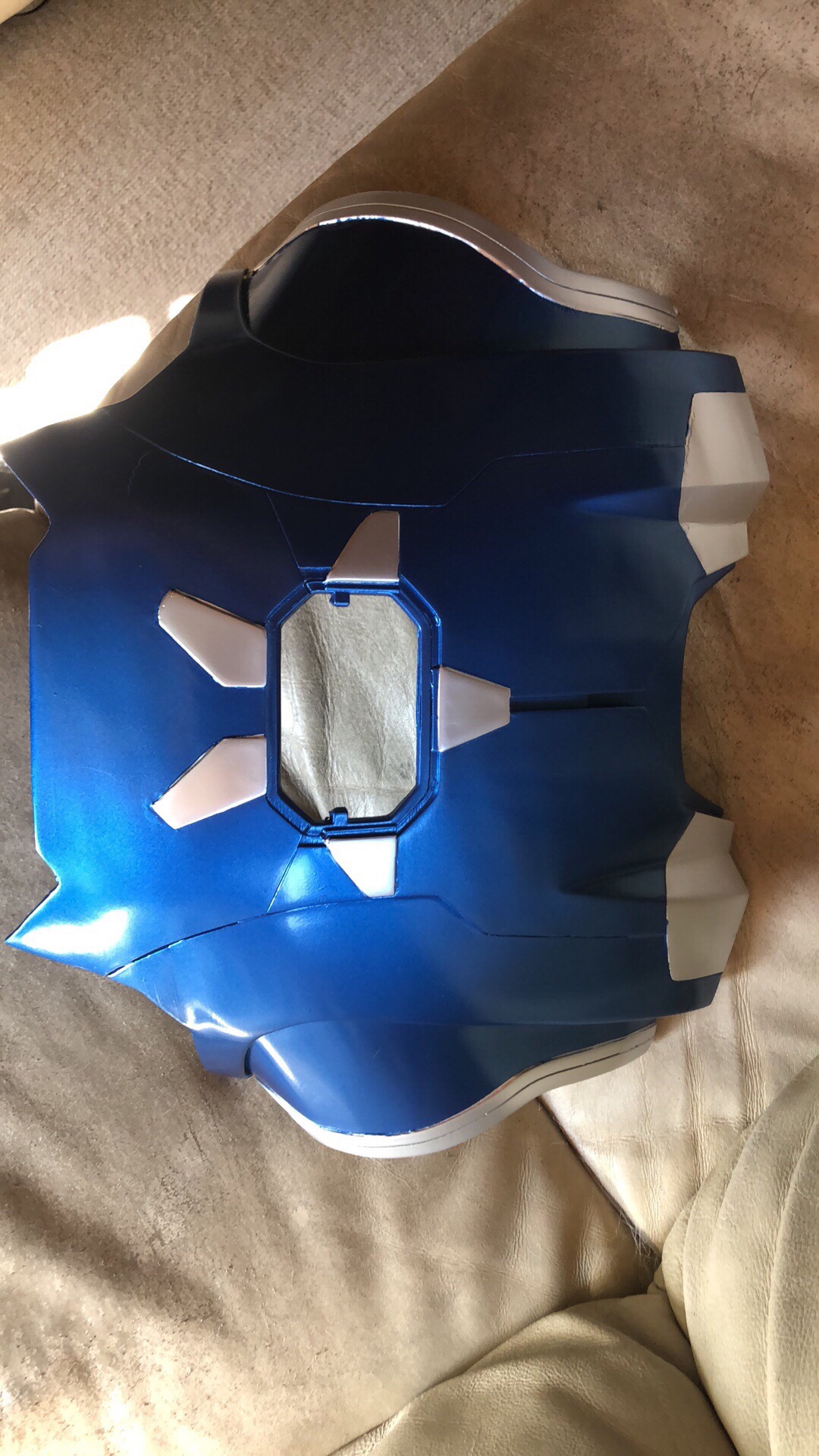 the 2nd helmet got some work too, not 100% happy with this, can still see some of the base silver between the red and blue, will fix this later, I'm not the best at taping off, stupid old knackered eyes. 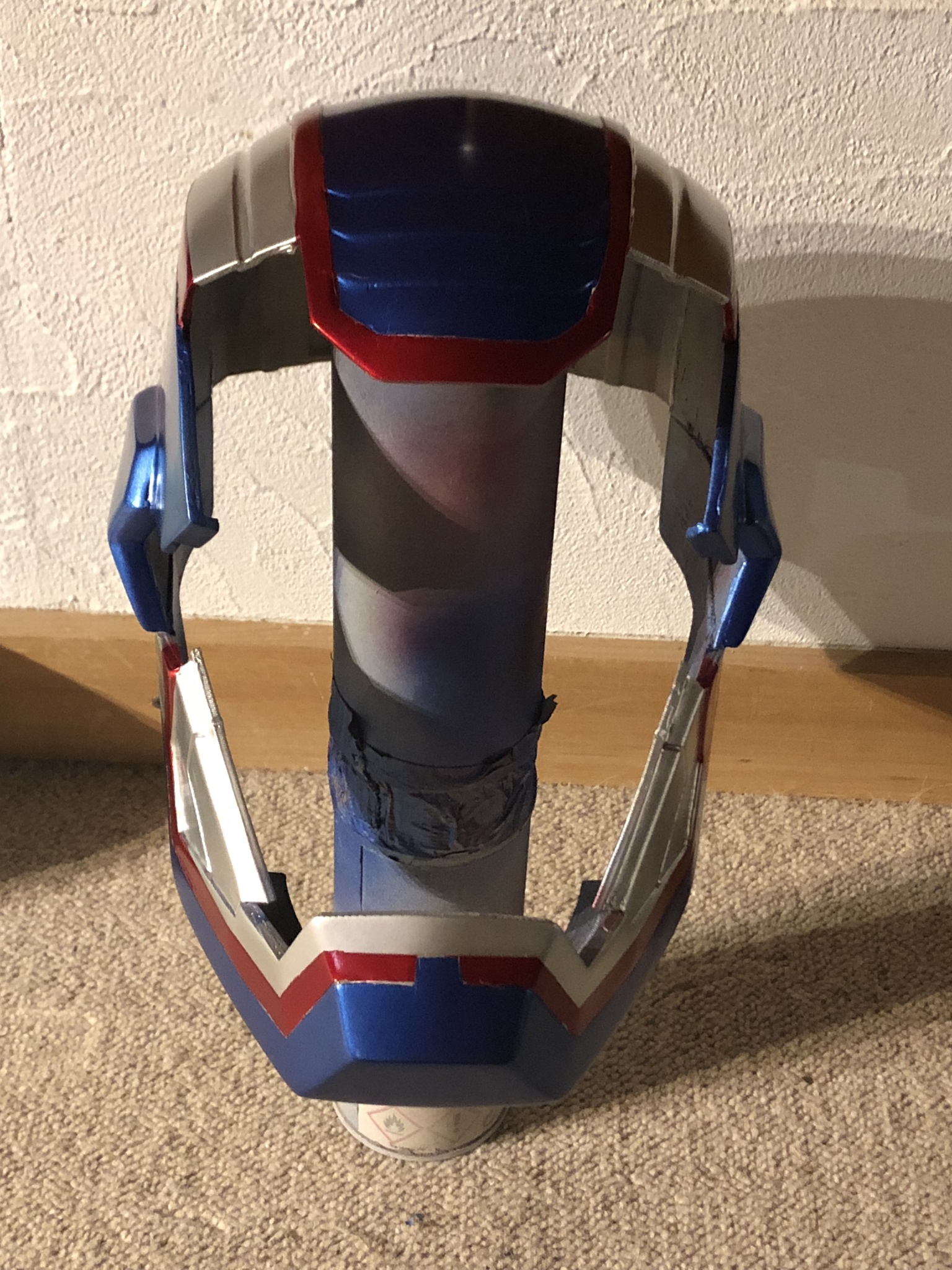 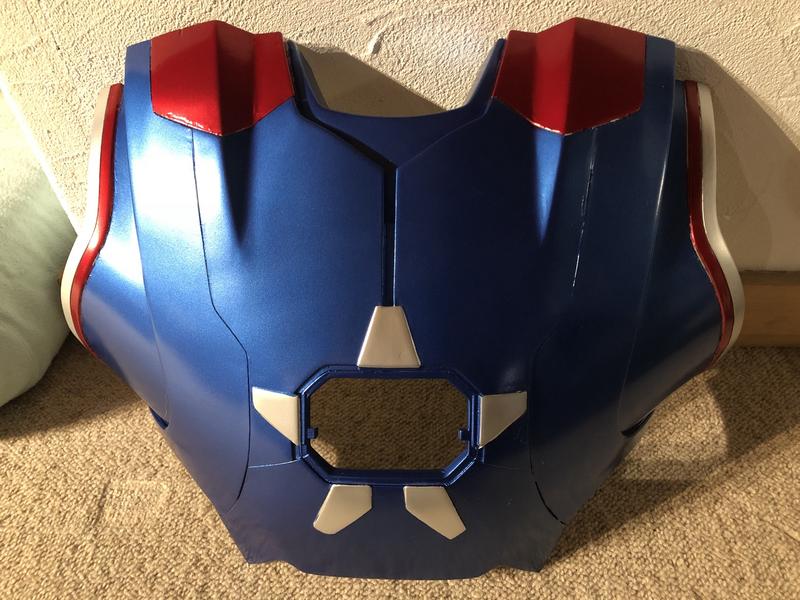 Awesome work & especially love the blue on this suit

some more sanding and testing lastnight 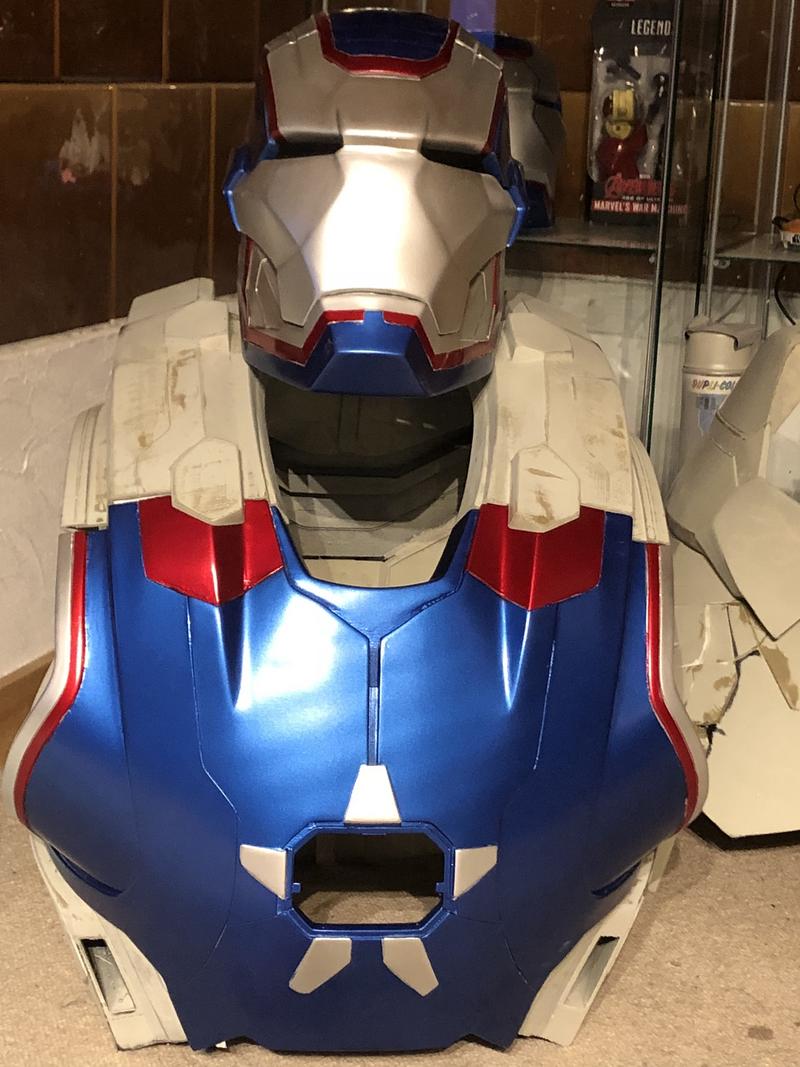 Man, the shine on that chest piece is impressive!

Sanding that smooth must have been a real job. Looks very good!

Djh69 said:
Sanding that smooth must have been a real job. Looks very good!
Click to expand...

yep its taking quite a while, I'm a bit OCD about it, should probably seek help lol

Did you try the xtc smoothing stuff? For large areas it may speed things up.

Djh69 said:
Did you try the xtc smoothing stuff? For large areas it may speed things up.
Click to expand...

I only use xtc for really big prints like my k-2SO, for smaller stuff like this I'm too lazy for all the mixing and mess of xtc 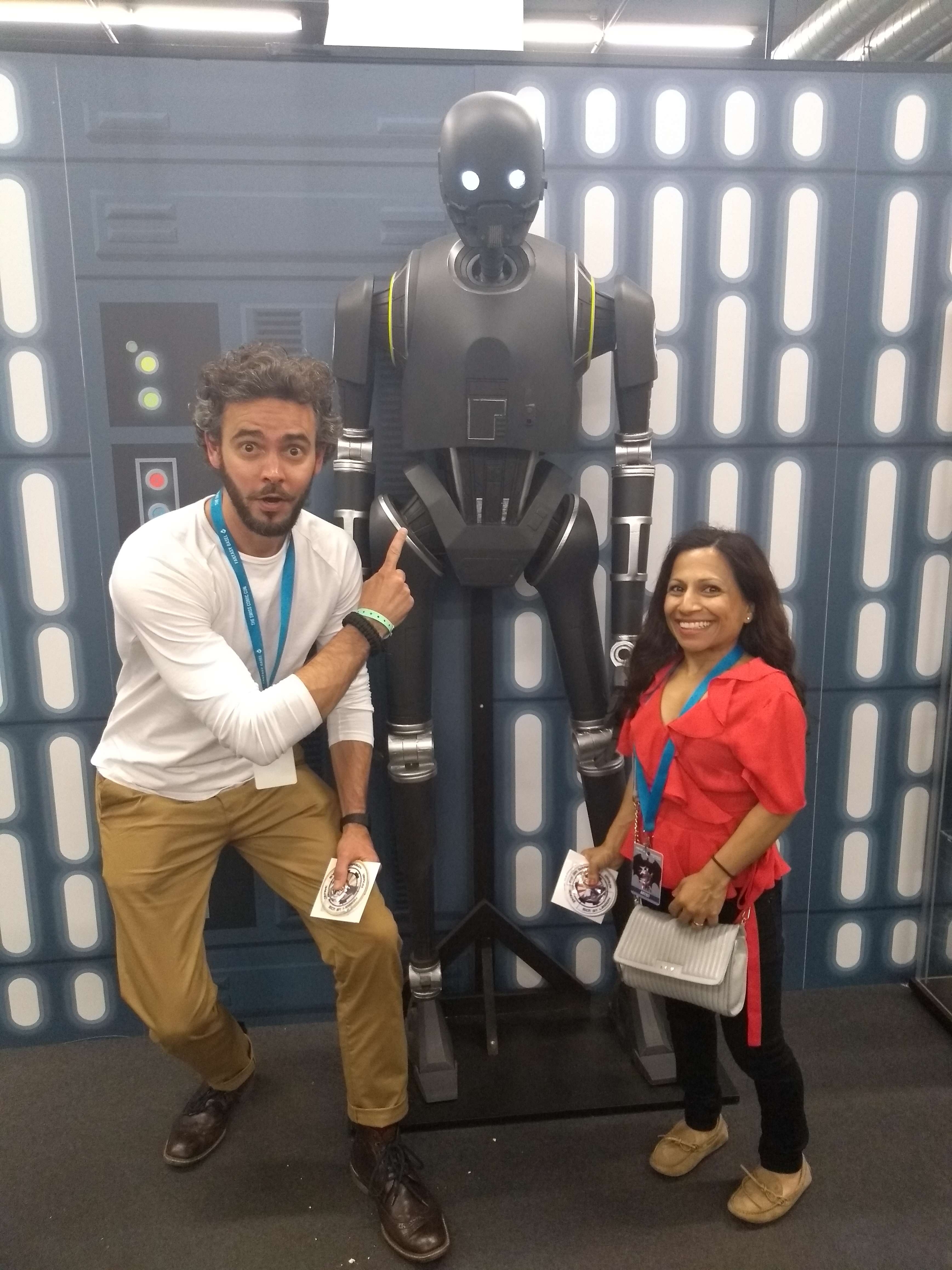