Hey! This is a costume thread. About Spiderman.


After that strange intro, welcome. Here it is, kids. A classic comic costume (a little alliteration) With my own Chase Calloway touch. I recently finished and wore my costume to a big convention here in Ohio, and it went incredibly well. A good number of people thought it was AntiVenom, but most knew it was "2099" Spiderman. Either way, it was great. (Shamless plug => http://www.therpf.com/f78/2099-future-foundation-spiderman-costume-226657/ )

So now, it's time to tackle a comic based Spiderman costume. To try looking like a much prettier, or movie-esque, version of Ramos' Spiderman. I chose his because it's absolutely my favourite version. I love the eyes most of all, which I've already made. But of course, I'm taking a lot of liberties/inspiration from the amazing movies. Of course, all of my costumes have pattern/texture like the first Amazing Spiderman. It just catches the eye and at conventions, that's what it's all about. And it just looks awesome to me, and if I'm happy with it, then perfect.

So! Lets talking about the features of this costume. I have a plus zipper arrangement, which is the best in my opinion. Two zippers that wrap around the waist, one that goes down the butt, and one that runs up the back. The Amazing Spiderman 2 movie does this but without the butt zipper. When I tried that, the waist just couldn't fit over my buns, so a butt zipper was required. Glove zippers, a zipper on the back of the head, and a pocket zipper are there too. Now I just need zippers for the boots and my crotch. Also, I decided that the middle and ring finger shouldn't have red sections on them. For some reason I'm really proud of this. Literally I got the idea to do this, which inspired me to even make this costume in the first place. Kinda crazy, I know. xD I was originally going to do a SpiderGwen+Miles Morales Spiderman costume but that'll have to wait.

I'm also deciding to go with the Amazing Spiderman chest/back symbols and an uneven web pattern (Like my edge of time spiderman, but better) Also, the mask on this one is attached to the body. This is a huge change for me, so hopefully I don't mess it up too bad. I do plan on trying to make replica comic style web shooters to wear under the suit (If anyone has recommendations for that they are welcome.) I hope you guys enjoy seeing the progress of this build. The next big con is colossalcon in early June, but I'll be working on another costume at some point so I can have two (The aforementioned SpiderGwen/Miles costume). Here come the pictures! You can see how the zippers meet up in the back here. I messed up a bit on the pattern. The red stripe on the arm is supposed to be smaller and shoulders more angular, but easy fix.
Now, I get a lot of questions about how I sew these suits together, so ask away! I don't make threads about my journey just to be rude to people. There are a few.. secrets of mine, so I don't have total copy cats, but there's not much I can really do about that. I tell you guys 95% of everything. :* Thanks for looking, everyone. I did draw up a plan of the costume, but I'll upload that later.
Last edited: Feb 10, 2015

Humberto Ramos? I love his art style. Can't wait to see this!

So, after doing this for so long, I've become hella efficient. So, firstly, lets talk about the material. I mixed up all of my paint and rubber in mass quantites and stored them in jars, so that when the small bottle of that liquid runs out, I can just use more of my premade stuff. I used to have to make new mixtures up after the bottle ran out. This caused some color/texture/finish differences and it was such a hassle. So, the webs are dark grey with iridescent crystals scattered heavily throughout, and I decided to take the Amazing Spiderman 2 route and make the chest spider the same color and attached to the webs. The black that will go onto the blue parts of the costume has less iridescent particles, and the red close to none.

The Spider and lenses are made out of urethane, which I simply cut with an exactoknife. Then used a roller to paint layers on and for the lenses, did a hexagonal pattern just to add more texture. Sprayed them with a glossy finish and they were good to go. The lenses are just glasses with a silver hexagon film over them I got from TJack. I love the reflective look, but the lenses themselves were dark. I needed it to look whiteish. This film changed everything and didn't affect the visibility at all. Perfect.

(Before the frames were textured with hexagons) 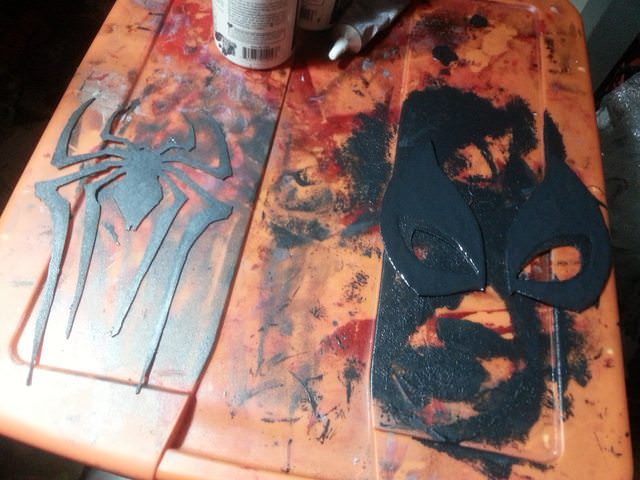 After gluing the spider down, I put the costume back on and traced out the weblines. I still have stitching work to do (Way more blue on the arms, raising the torso because it keeps bunching up at my tummy, and making the neck tighter.) So I have to keep the painting strictly to the torso and legs. And the blue part of the back. And the mask. Even the gloves. Upper arms and shoulders off limits. Sticking the Amazing Spiderman pattern, I filled in the areas with marron ink then outlined the shapes with pen. Then I just painted the hexagons and webs in. And I kinda outlined my obliques for when I do the muscle shading. 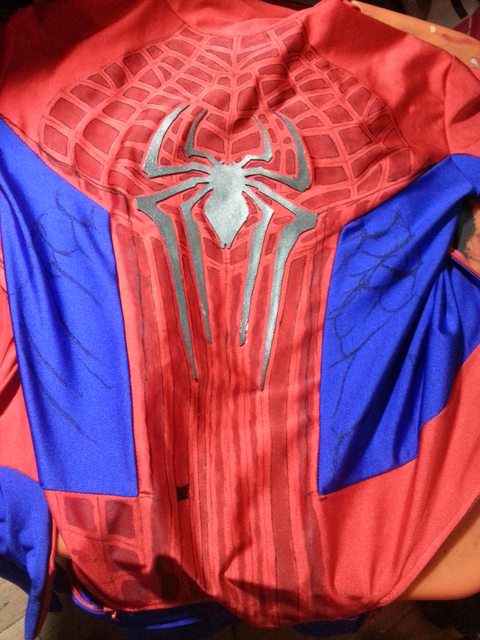 Painted ( But still wet at the time) 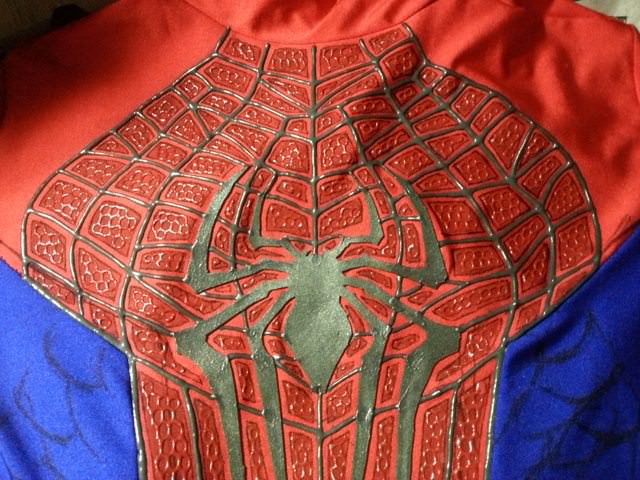 I'm a bit proud of how perfect it is. I've gotten good at this. xD I also glued the lenses onto the mask, and will be applying the frames soon. 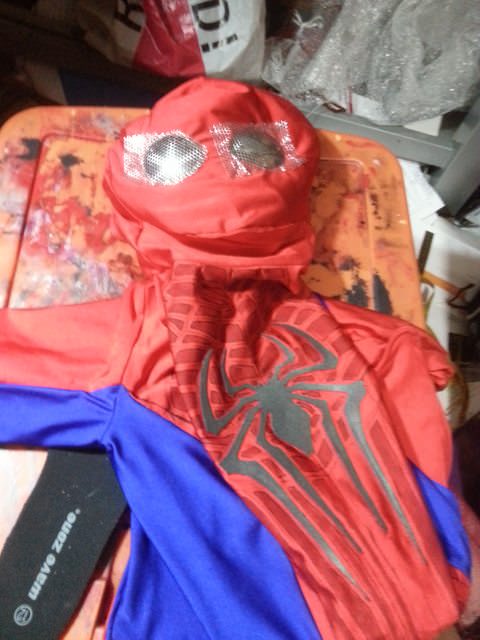 Love your threads, original one of a kind builds are freakin AWESOME! subscribed!

"But how are you killing it, Chase?"

I'm just being overenthusiastic. Keeping a positive attitude is important. So, what did I do. For one, I glued the frames onto the mask. It's nearly impossible to make them symmetrical doing it by hand and without a computer, and sadly I am only human. So safe to say, these aren't symmetrical and it's killing me. But by making the webbing symmetrical I should be able to manipulate everything to make it look right. These eyes, when finished and done right, will look awesome.
I also filled in the shading of the hexagons with a drawing marker. For the under chest and abdominal shading, I just blacked in all of the fabric in between the hexagonal pattern. For the oblique shading, I painted in the dark blue (which is dye na flow midnight blue) and just used sharpie for the black shading. So right now, I'm working on finishing the mask until I get more blue fabric to fix the arms. The torso is a bit too long to, so I'll have to shorten it. But with this three day weekend coming up, I'm about to finish a lot of work.

That asymmetry though... But they're also not completely glued on here I'm always astounded at how FAST your progress is, man. This looks fantastic.

Words cannot describe how awesome and unique this build is.

You are the man iracel. keep being awesome as always.
G

This looks AWESOME. Keep up the good work man!
And the other idea sounds cool too

Thanks for the kind words everyone. I appreciate them a lot.

I tried to take pictures of the full suit but they ended up pretty bad. So I'll try again later. But I've basically finished the mask, minus parts where I have to draw in the shading. That's pretty much all I've done. About to start on even more of the muscle shading and stitching the costume in certain places to make it tighter (in other words, get those stomach winkles outta there) One picture came out pretty well. And here's one of the mask in process. Damn, I can see that this'll be another beast!

Lunaman said:
I'm always astounded at how FAST your progress is, man. This looks fantastic.
Click to expand...

Oh, there's a reason I don't start the thread from when I'm first sewing the costume. xD But thank you very much.

1) AMAZING!
2) Are the eyes an original design or are they based off of something? If they are, what? They look familiar...

Garbear7121 said:
1) AMAZING!
2) Are the eyes an original design or are they based off of something? If they are, what? They look familiar...
Click to expand...

They're based off of Ramos' eyes. Iracel said:
They're based off of Ramos' eyes.

Ohhhhhhhhh I THOUGHT so. Thanks! Those are some pretty cool eyes by the way
That picture kinda reminds me of superior spiderman

Yesterday at 10:21 AM
Captain Rogers

Yesterday at 9:36 AM
dariang
D