Indiana Jones and the Fate of Atlantis - Nur-Ab-Sal necklace

Hey all! I just wanted to share a bit about this little prop / costume accessory I've been working on.

It's the Nur-Ab-Sal necklace pendant, or simply the Atlantean pendant from the '92 computer game, Indiana Jones and the Fate of Atlantis.

I became obsessive about wanting to make this about a week ago. My girlfriend and I are going to Disney next month, and as fate would have it - apparently Disney does a "Not-So-Scary Halloween" party while we're there. After deliberating for a while about what costume I would like to wear while following Disney's guidelines, it finally struck me that Indiana Jones is a Disney property. After getting together most of my costume, I felt like I needed some sort of prop or something to make up for the fact that I can't carry a whip (Disney doesn't want any replica weapons, and I felt like a whip rides that line a little too close). I wanted something that would be visible but not cause a lot of discomfort for me to carry all night in the Florida heat. Then I remembered this game!

So I want to share a story about it before we get on with the pictures. My dad has since passed, but when I was a little kid - one of my favorite stories to tell about him revolves around this game. I was probably 10 years old, maybe younger and I was CONSTANTLY playing the Fate of Atlantis. I was a huge Indiana Jones fan - I used to have a brown rope that I would walk around with on my hip. Anyways at some point, we were supposed to go to my grandmother's house. I was in the middle of the game, and I was being a bratty little kid and refused to stop playing. My dad insisted we'd only be gone for an hour or two, and he'll help me play the game when we got home. That wouldn't do! I had Nazis to stop and a mystery to solve!

So my dad packed up our entire family desktop computer and desk, trucked it to my grandmother's house, and set it all up in the living room so I could be satiated for the few hours we were there that afternoon.

I have a lot of fond memories about this game and I remember my dad helping me through some of the puzzles and things throughout.

Anyway, that particular game has a lot of sentimental value to me and I thought it would be perfect if I could carry a piece of that with me while in my Indy costume. Since I haven't sculpted anything in close to five years, I thought my best bet would be to make a 3D model and get it printed. I made a model fairly quickly and got some quotes but I wasn't super happy about the pricing and figured I would need to do several prints to fine tune the model and the print settings. Instead, I bought some cheap air-dry clay, dug out all of my sculpting tools, and did my best.

I used my 3D model to print out lifesize templates of the different shapes so that I could use them as reference, which helped immensely. I know the sculpt isn't perfectly exact, but I'm fairly proud of how it turned out. After around six or eight hours, I decided it was probably as good as I can get it and poured the silicone for the mold. I'm hoping to pull the first cast tomorrow. It's just going to be resin, but maybe after our Disney trip I'll pick up some of that cold-casting metal powder and see if I can do a brass-resin cast. 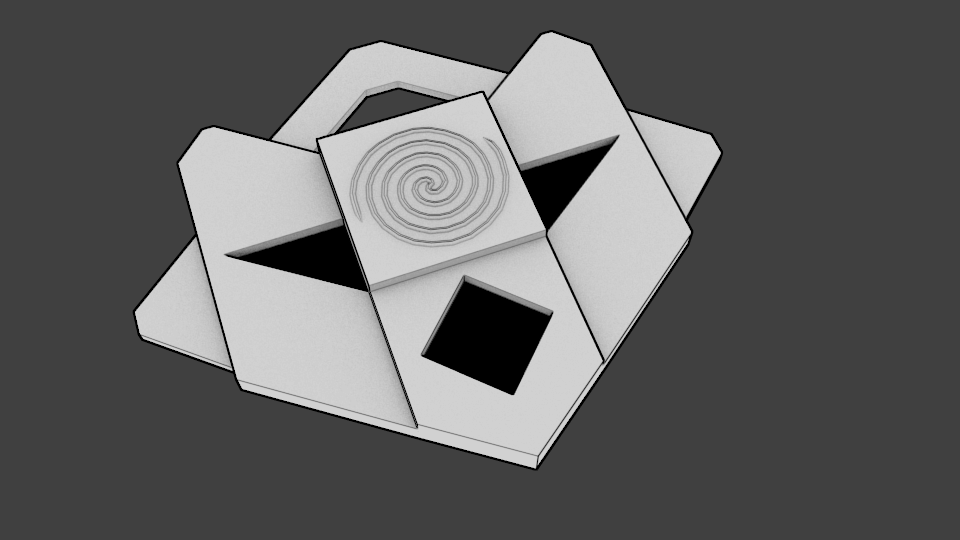 3D model made in Blender. 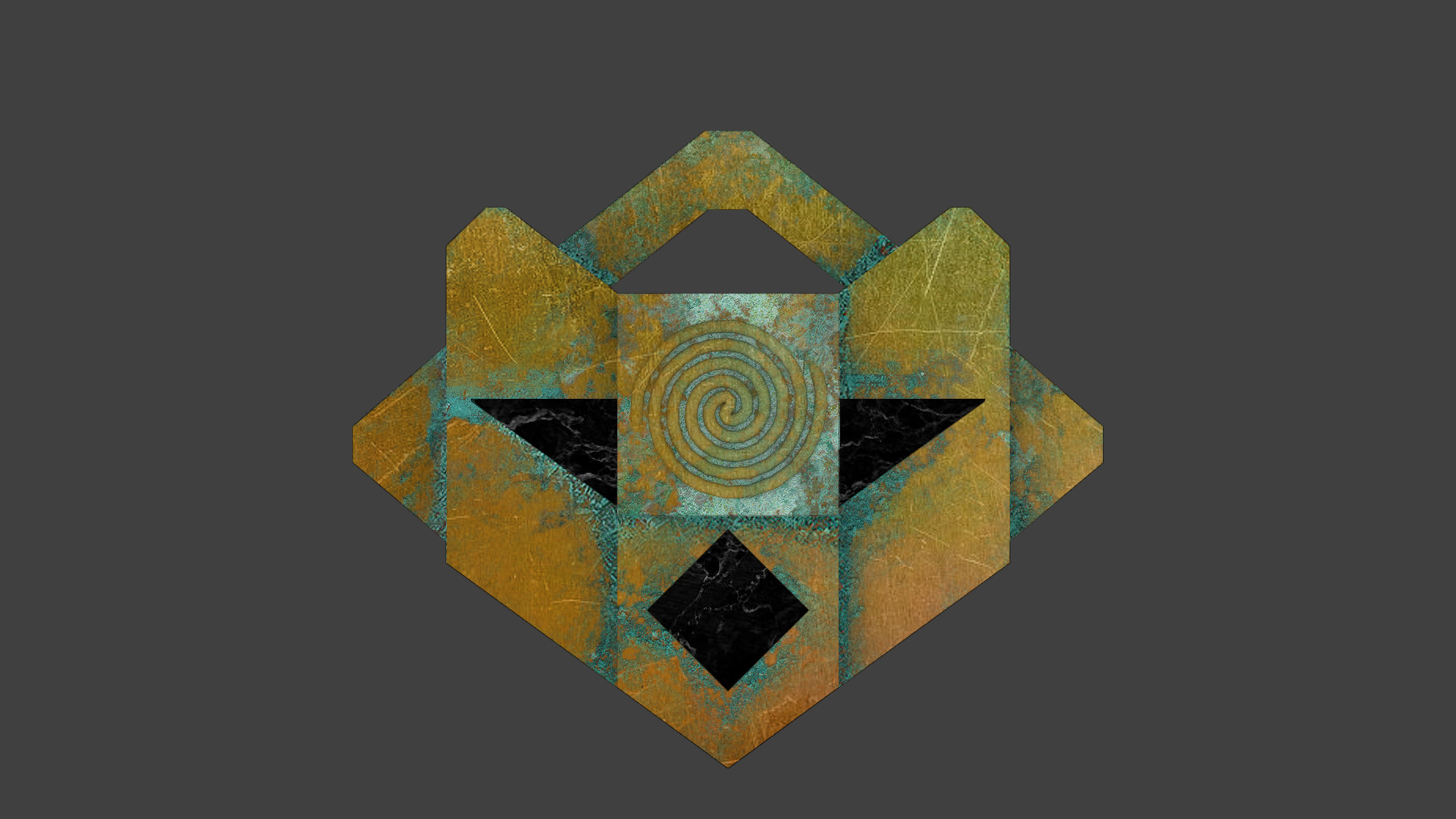 Photoshopped some textures onto it for a paint guide. 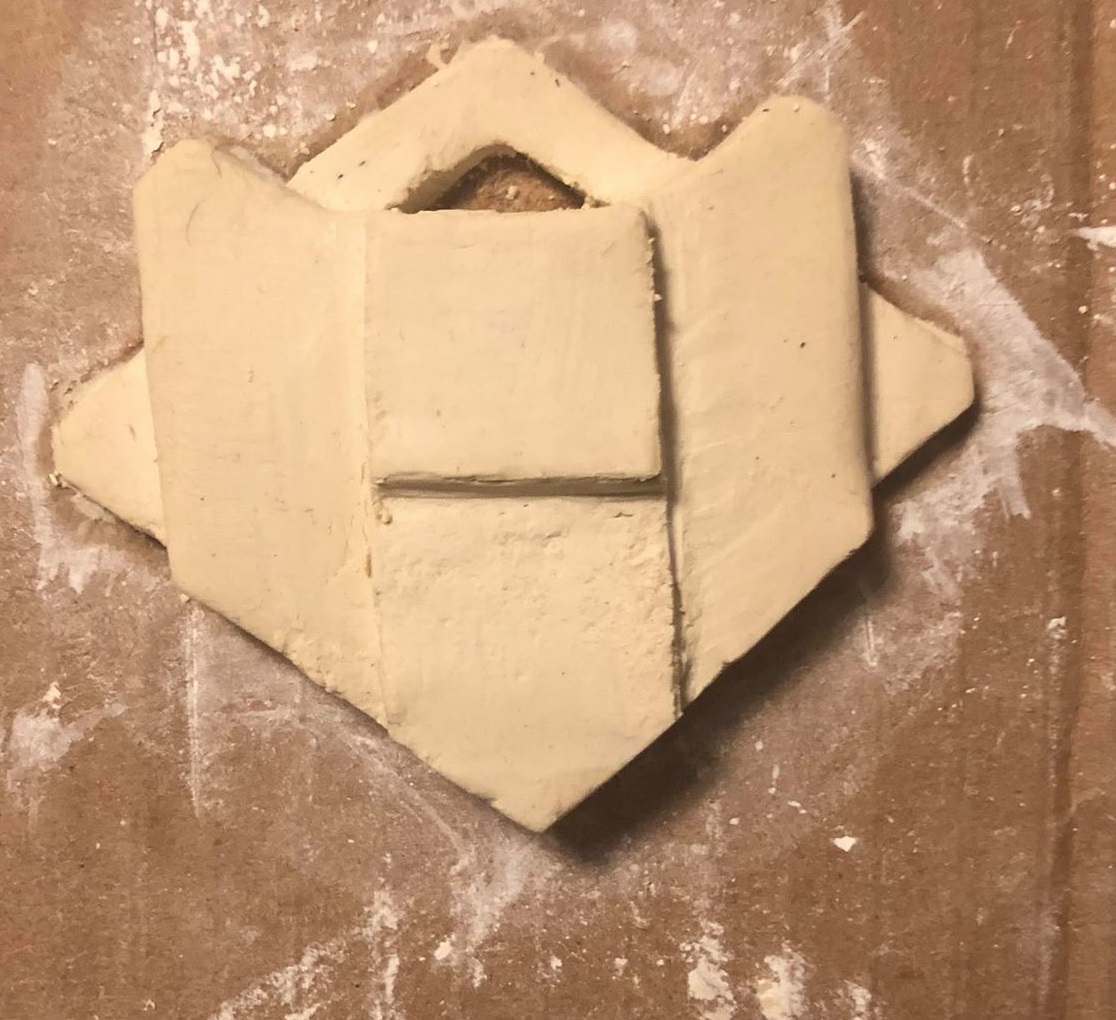 This is about 3 hours in, most of that time was spent just trying to get some clean lines in the super wet clay. 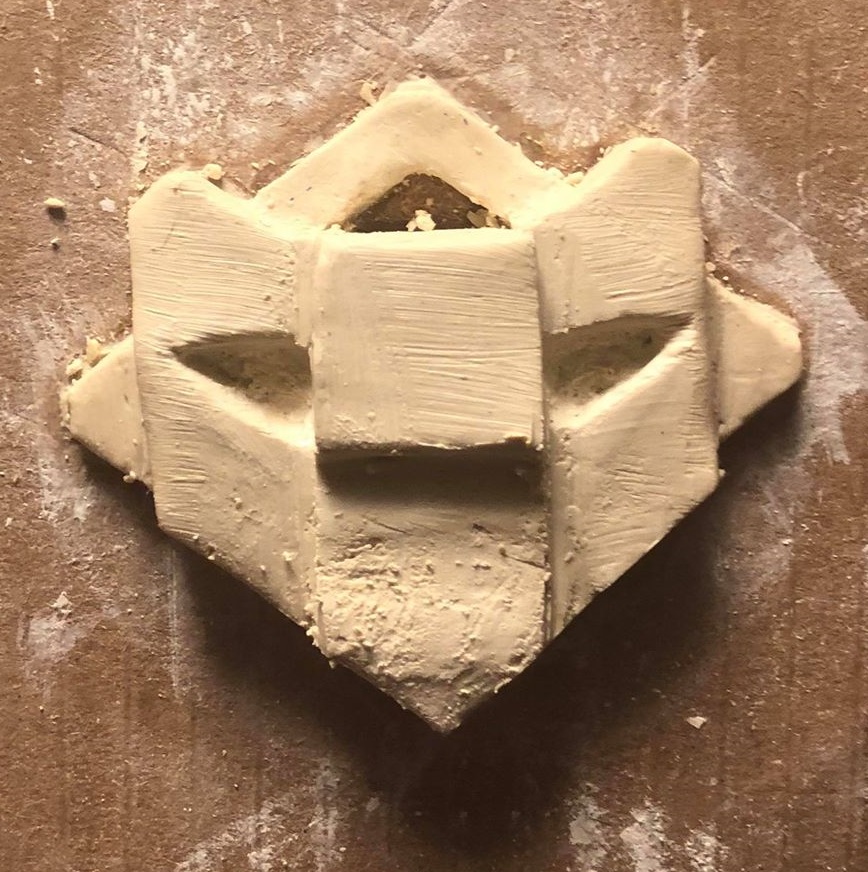 Added the eyes and goofed the mouth so I had to fill it up and try again. 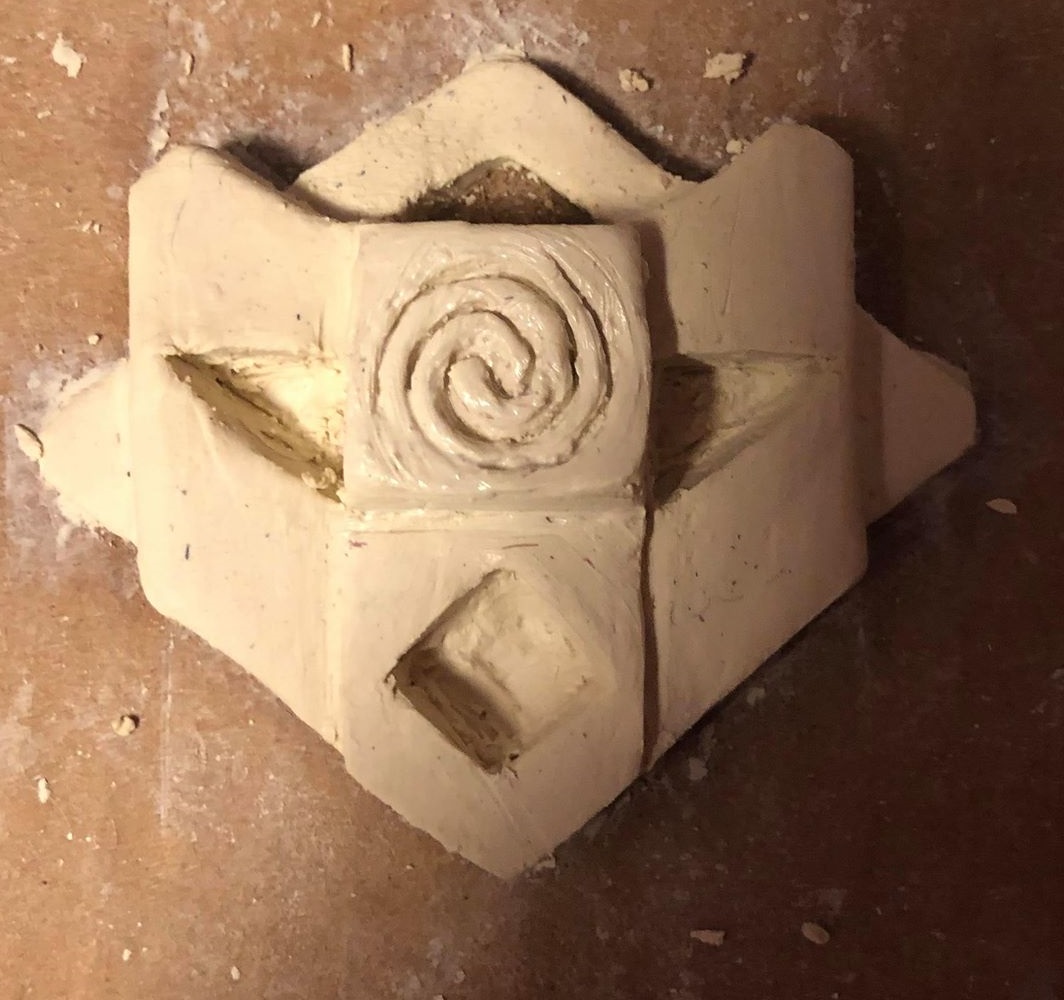 I think this is like 5 or 6 hours in. I left it to dry a little bit so it firmed up and tried to straighten the angles and fix the symmetry a bit. I was super worried about the spiral on the forehead but it came together fairly easy - obviously it's not super clean and perfect but the impression is there and I kept telling myself "it's supposed to be from like 9,000 BC it doesn't have to be exact" 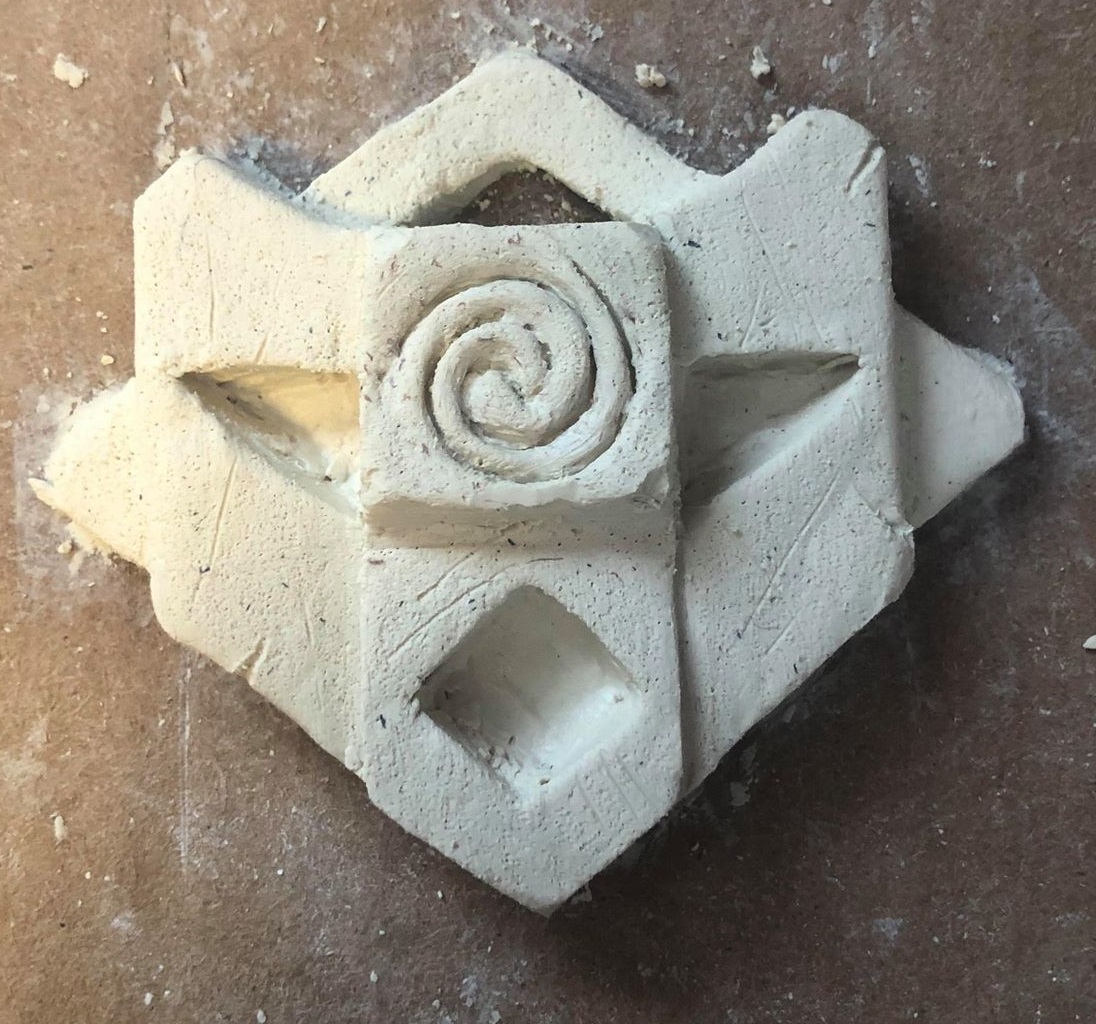 Here's the finished sculpt before molding. Added a slight texture all around and gave it some dings / scratches / chipped edges for some character and to try to draw attention away from some of the symmetry problems.

I downloaded a bunch of reference photos of real-life brass and gold artifacts. I'm hoping to start with a metallic gold base coat and then add some copper tones, a touch of black, some light gold, and finally fake that patina look with a couple shades of turquoise and white.

As for the necklace band, I couldn't really find one that I liked so I think my girlfriend and I are going to try a simple leather band necklace and use some twine or really thin leather to tie the pendant's loop onto the necklace. I think it will help the whole thing look "masculine" (in the game, only the female character wears the necklace and it had a sort of gold bar-link chain) while retaining that old artifact look combined with Indy's sort of rustic style.

I'll update this thread as I pull the first castings out and try some paint techniques.

Thanks for looking everyone!

Cool.
When I made mine I layered sheet styrene and used wire and epoxy putty for the loop and wire for the spiral.
(I made both versions)

division 6 said:
Cool.
When I made mine I layered sheet styrene and used wire and epoxy putty for the loop and wire for the spiral.
(I made both versions)
Click to expand...

I briefly considered using sheets of foam to use as layers and then covering it with either epoxy or clay but decided against it. I also bought some thin tubing for the spiral but decided to do it in clay as well. 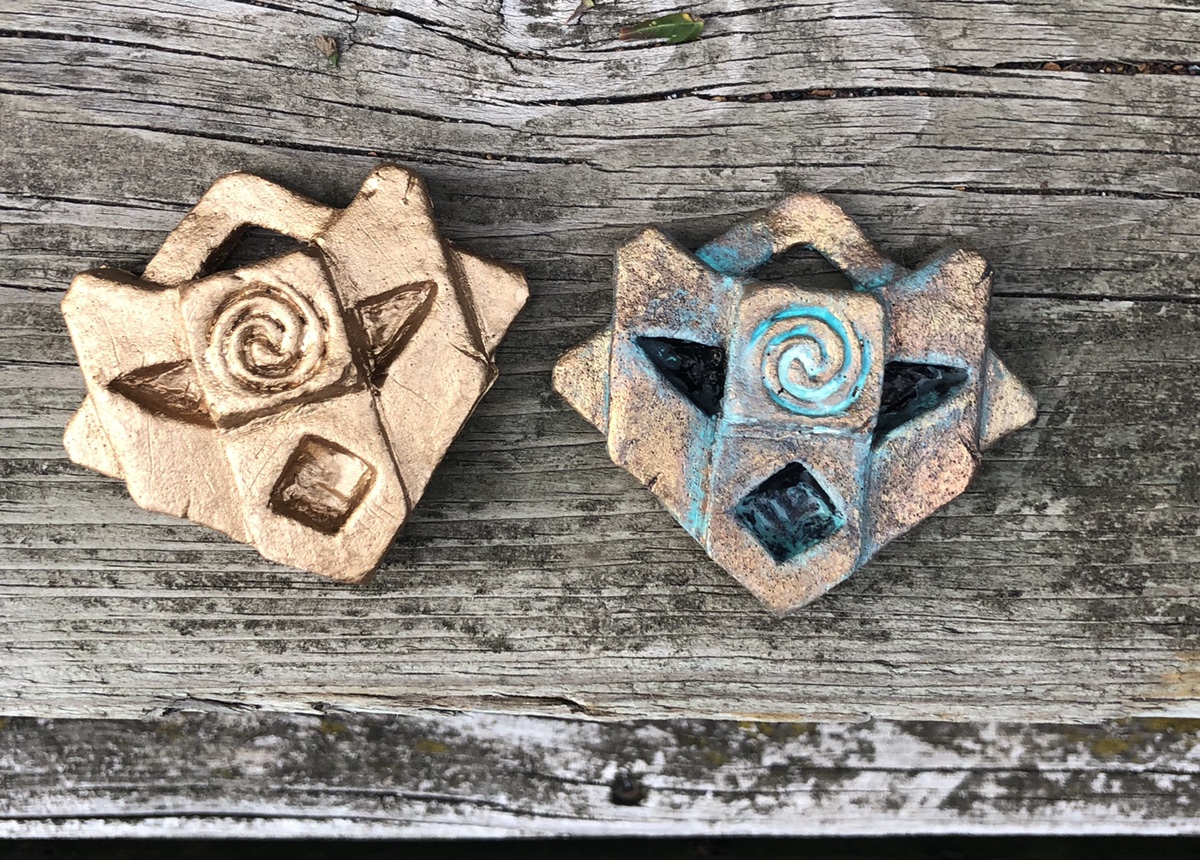 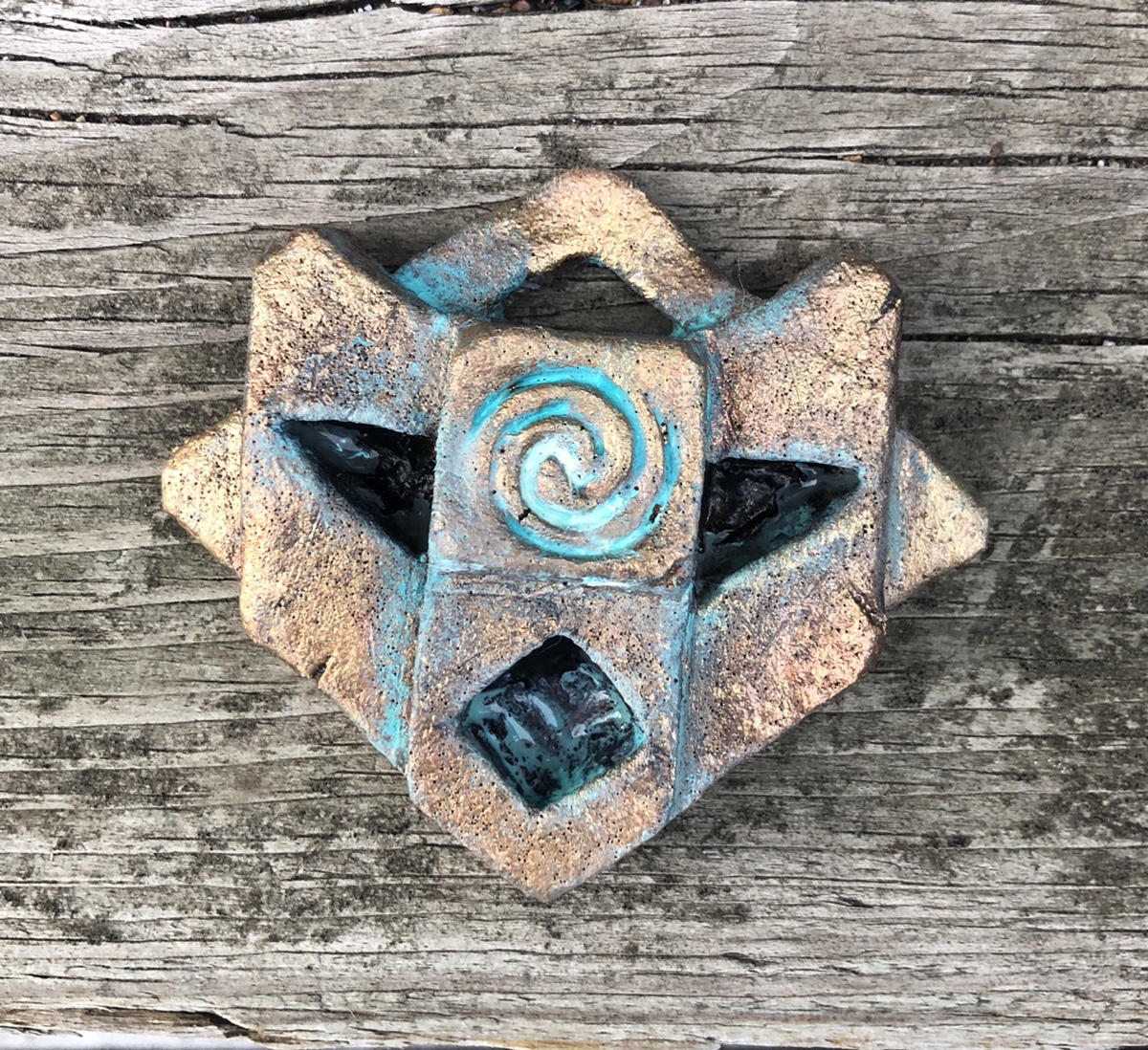 So I ended up casting two of them and painted them. One is finished, I’m going to quickly paint the other and test some clear-coat sealants. I have a glossy coat on hand but I don’t want to ruin the effect of having the gold shine and the other layers of paint not shiny / metallic as it definitely contributes to the oxidized metal look.

I used a metallic gold base layer and brushed and sponged 7 different colors on. I used a lighter gold, a metallic bronze and metallic copper, black, off-white, aquamarine, and cyan blue. The blues and white were watered down for the patina effect. Super happy with how it turned out!
Last edited: Aug 25, 2019

Okay, last update! I did two coats of matte clear coating and then tied it onto a leather necklace. I wanted it to appear “rustic” and like something that could’ve been assembled maybe in the field upon finding the pendant and have a little bit of an interesting look / texture. Used sliding knots for the necklace and thin twine to attach it to the pendant. I like the contrast between the dark brown leather and the lighter twine. 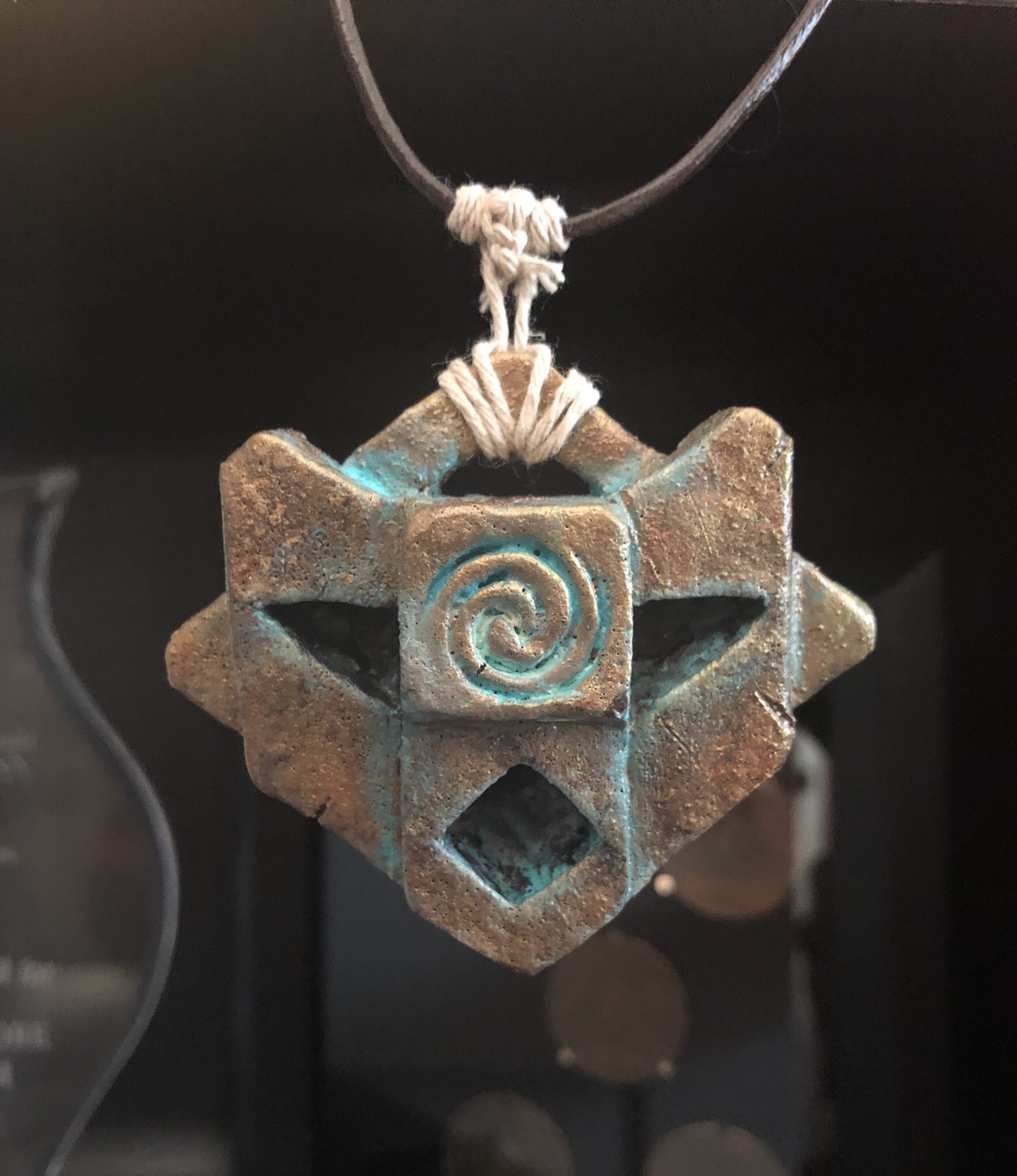 Here's a version I made a couple of years ago, using layers of cardboard cut out and glued together. I cut some copper grounding wire for the chain. 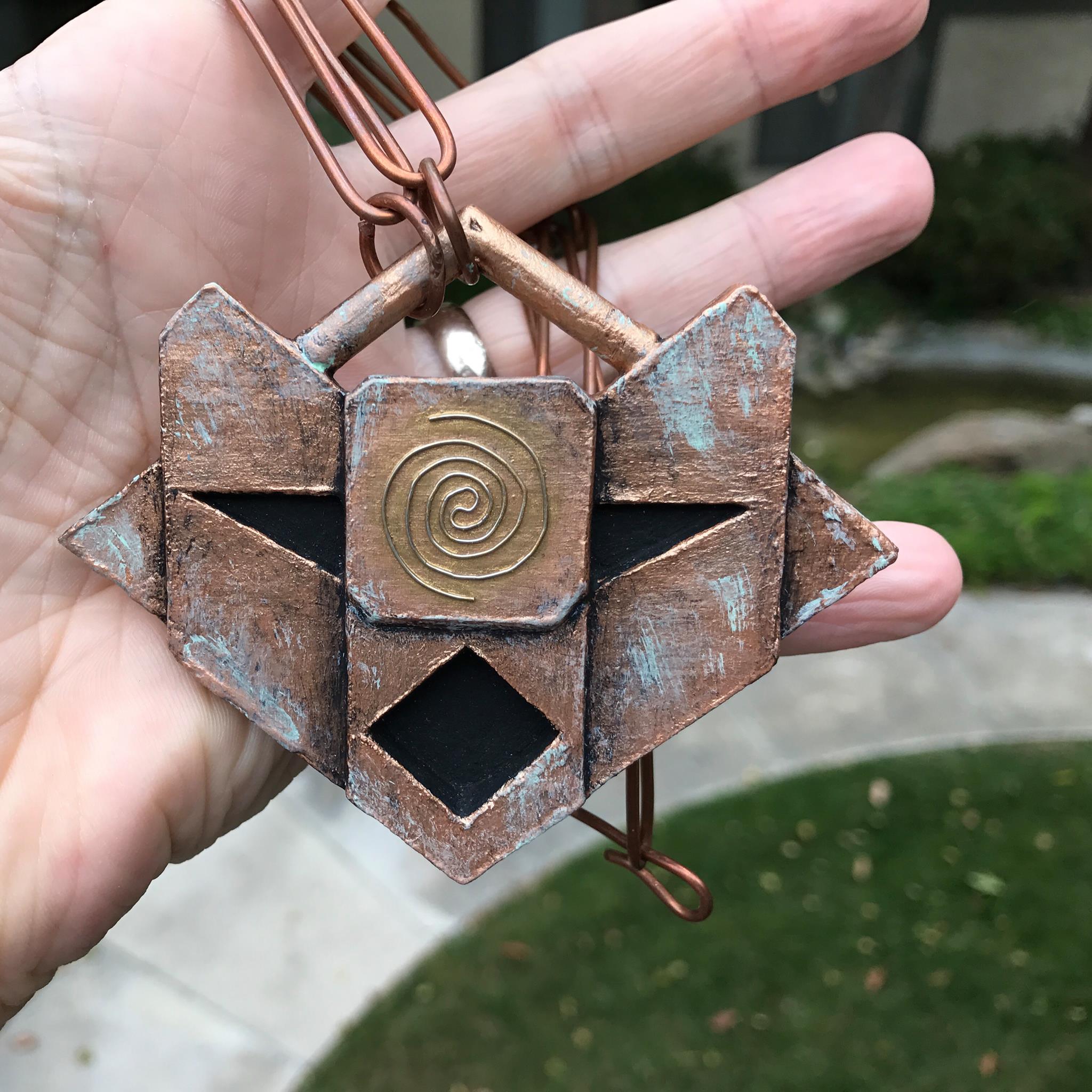 @MoviesCollin: I can totally relate to your story. Indiana Jones and the Fate of Atlantis was one of my first games (Right after The Secret of Monkey Island) and to me it was fascinating. It was in English and have had barely understand a word but the scenery and the atmosphere of this game is something I can't resist if now 25 years later.

I had the idea of creating that medallion for years but some months ago I started to make it real. I definitely wanted to make it out of metal and selected brass. Meanwhile one can see what it is going to be so I would like to share some pictures. 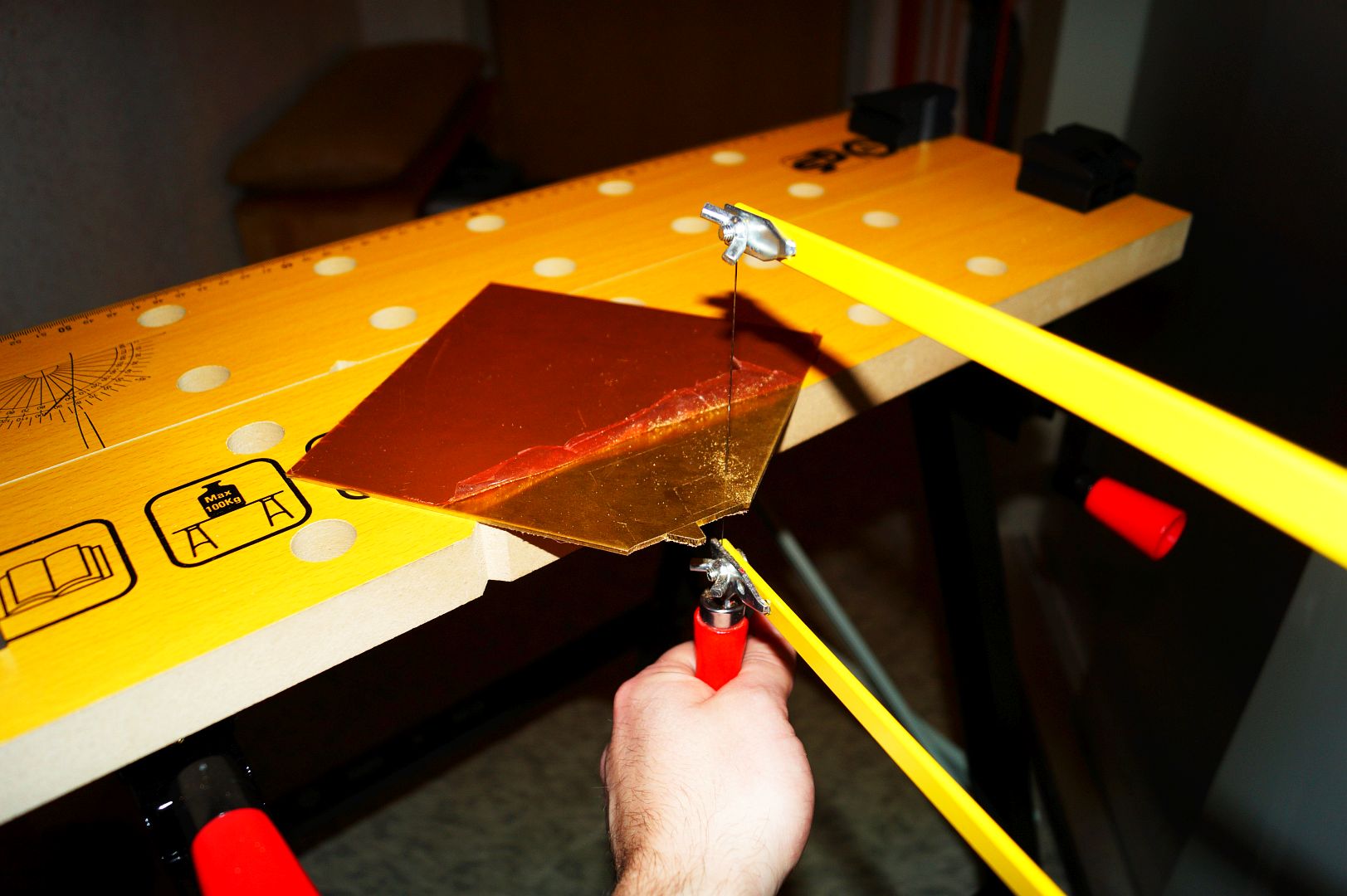 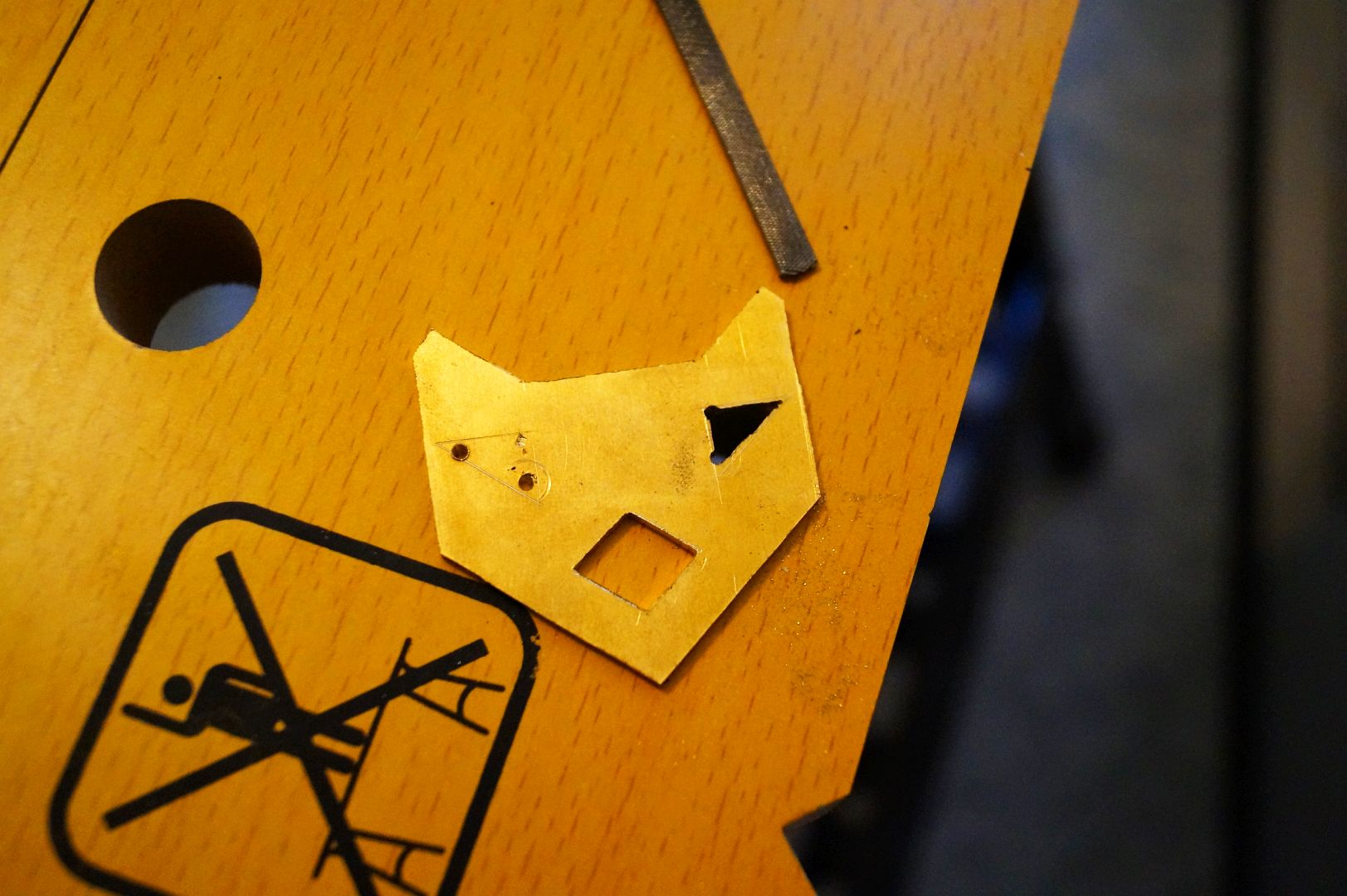 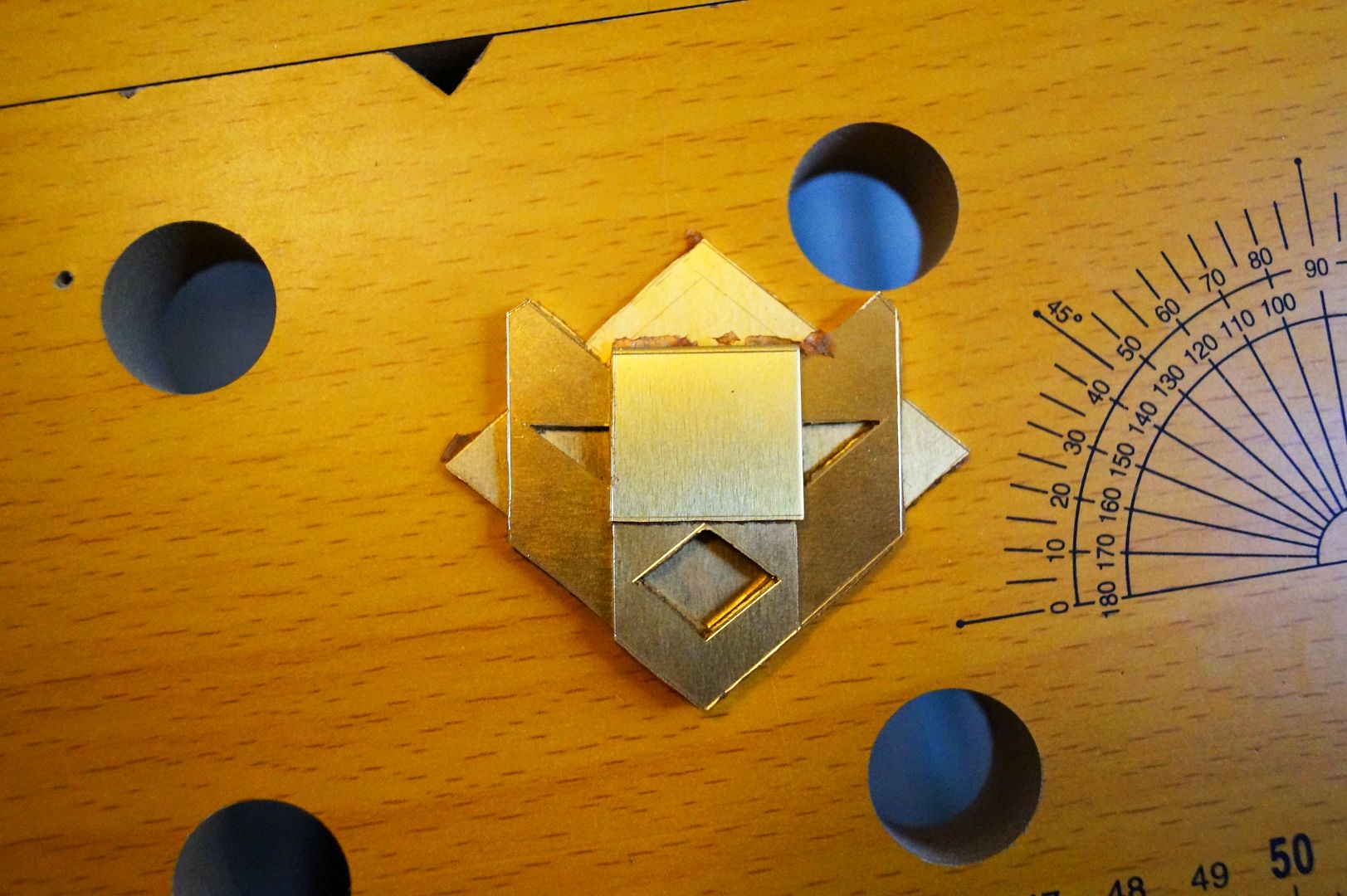 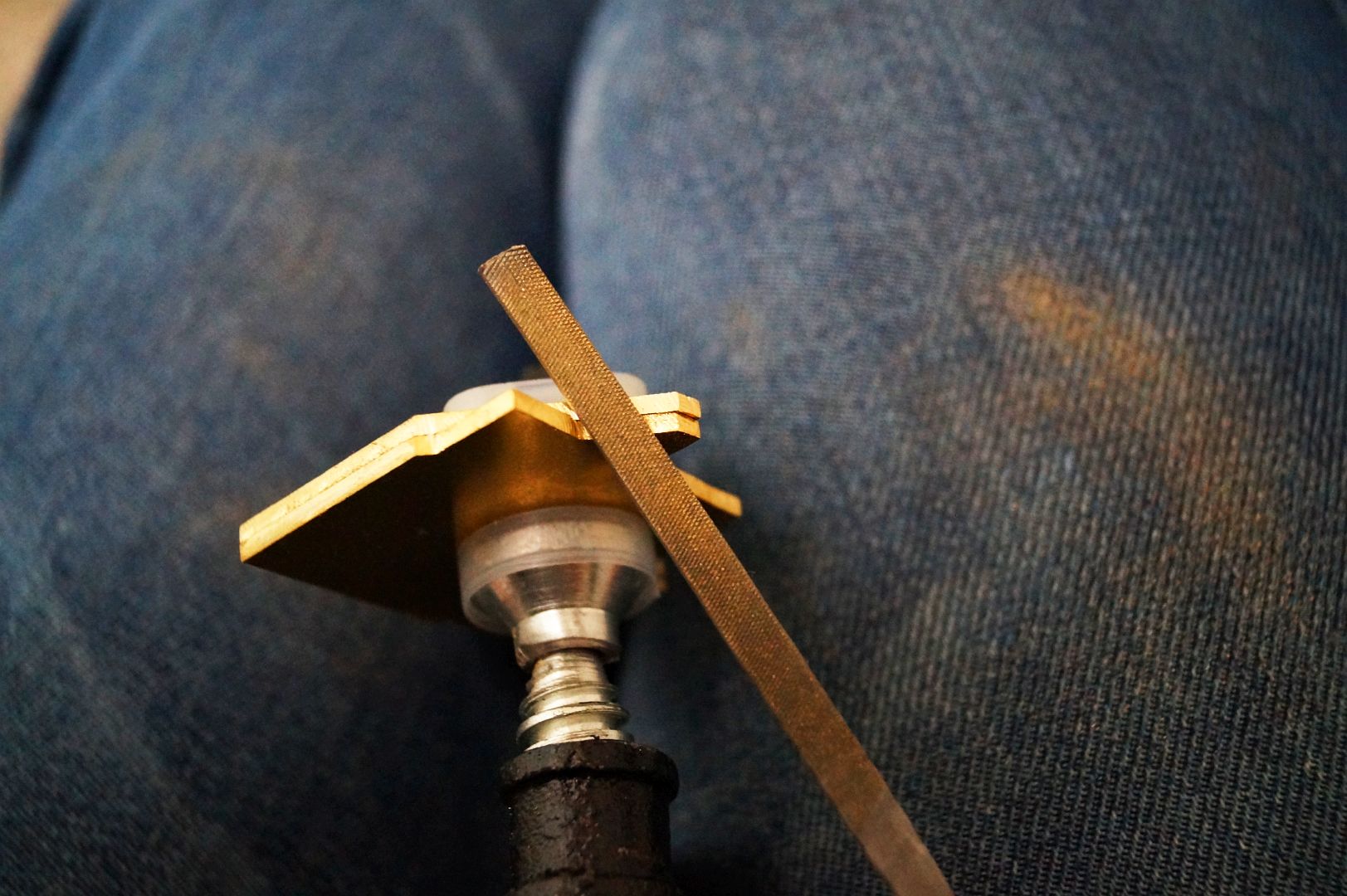 And finally, the current state: 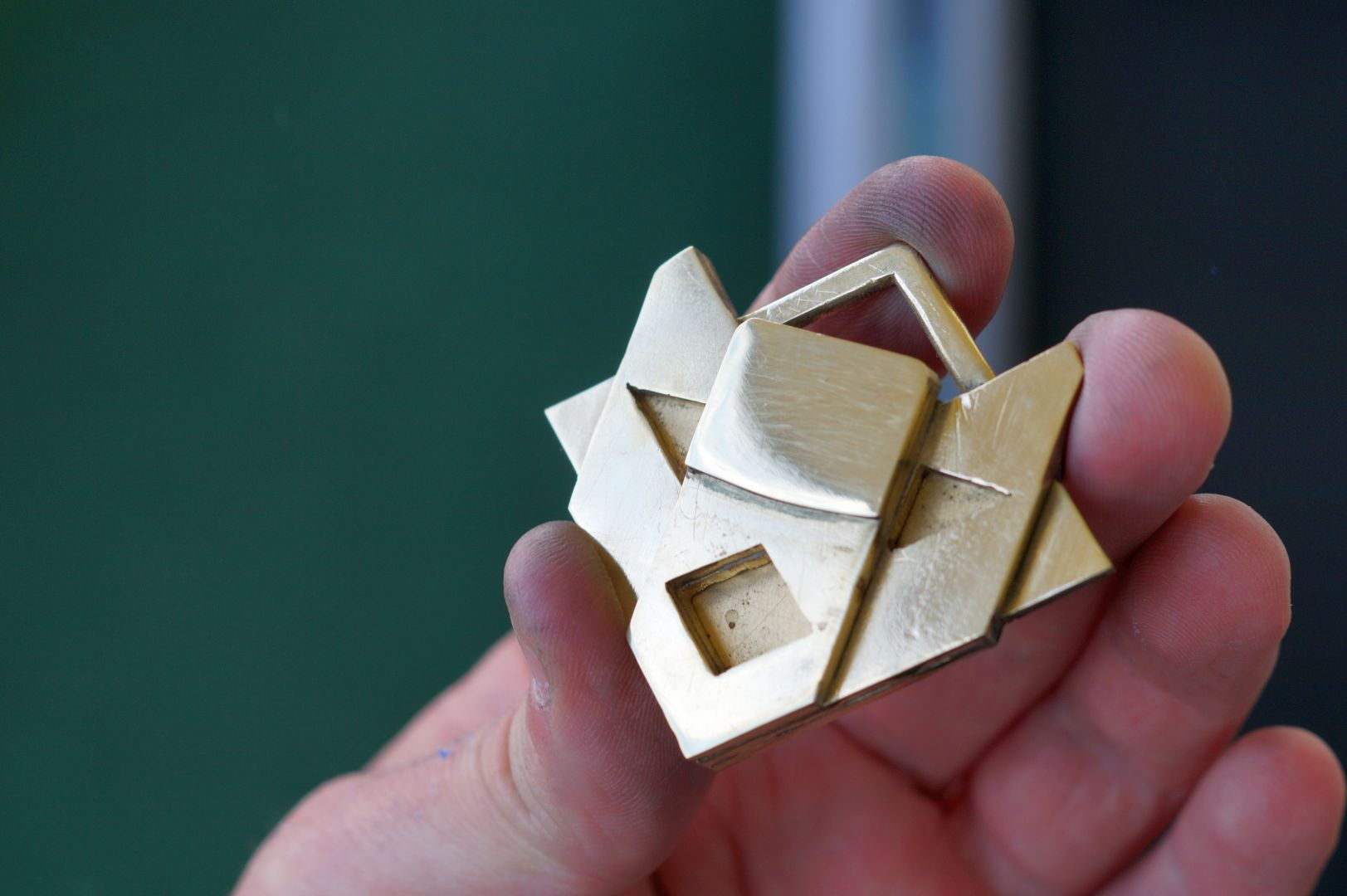 Since I did not find a solution for the spiral, I guess I need to engrave it. I am still not sure if I will age it with vinegar and salt or if I leave it as "new". A second version is already planned and I will avoid some things I could have done better
Last edited: May 7, 2020

How did you bond the pieces together?

How did you bond the pieces together?
Click to expand...

With a dual-component adhesive. It is super sticky. I tried it with two smaller pieces upfront and I was not able to loosen them with my bare hands.

You need surprisingly little of it. The amount on the picture was already way too much:

These are the 2 I made several years ago.

RPF PREMIUM MEMBER
They are nicely shaped. Still not colored?

justmarc said:
With a dual-component adhesive. It is super sticky. I tried it with two smaller pieces upfront and I was not able to loosen them with my bare hands.

You need surprisingly little of it. The amount on the picture was already way too much:
Click to expand...

justmarc said:
They are nicely shaped. Still not colored?
Click to expand...

No still not painted.
They're sitting in a silicon mold that's waiting to be finished.
Ran out about half way through molding them while working on parts for my nieces Rey costume.

RPF PREMIUM MEMBER
Greg Frost Could you tell me where you got the chain from? I am looking for sth. like this (long and short parts alternating) but I found nothing appropriate so far..
Last edited: May 7, 2020

justmarc said:
Greg Frost Could you tell me where you got the chain from? I am looking for sth. like this (long and short parts alternating) but I found nothing appropriate so far..
Click to expand...

The chain is actually really easy to make out of solid copper grounding wire, which you can get from any hardware or electrical supply store. I think it's #6 AWG or similar, because that's what I had, though smaller diameter wire (#8 or #10 AWG) would have been easier to work with. Copper grounding wire usually costs $0.40 to $0.70 per foot; four feet should be plenty to make a chain 18-20 inches long, including the clasp.

I used a dowel as a mandrel for the round links and a yardstick as a mandrel for the long links. It's the same process you would use for chain mail links: you wrap the wire around the mandrel multiple times in a tight spiral, then slide it off and cut the rings apart. If you don't solder the links together after assembling the chain, you will want to file down the edges so they aren't sharp.

Looks cool . I made a few of these about 10 years ago now. I made mine with thin sheets of wood, then made a mold from that for the shape and added the details afterwards. Was an enjoyable little project.

Indiana Jones and the The Fate of Atlantis, Nur-ab-Sal necklace (good and Evil versions) as worn by Sophia Hapgood. £15.00

D
Sankara sanskrit, indiana jones and the temple of doom