Hey everyone, this is my first post here. I need some help with identifying a gun from the Mandalorian series for a custom project

In Chapter 3, The Sin, we are introduced to the "Heavy Infantry" Mandalorian, a juggernaut-like class of Mandalorian. In the last scene of the episode, we see him do a jetpack drop as he fires his 3-barrelled heavy blaster. It's like a 3-barrelled minigun, but the barrels don't move.

Now sadly the scenes is very fast paced, with lots of weird lighting, so getting good screen captures isn't so easy. Luckily for us the Black Series figure shows us a lot more detail 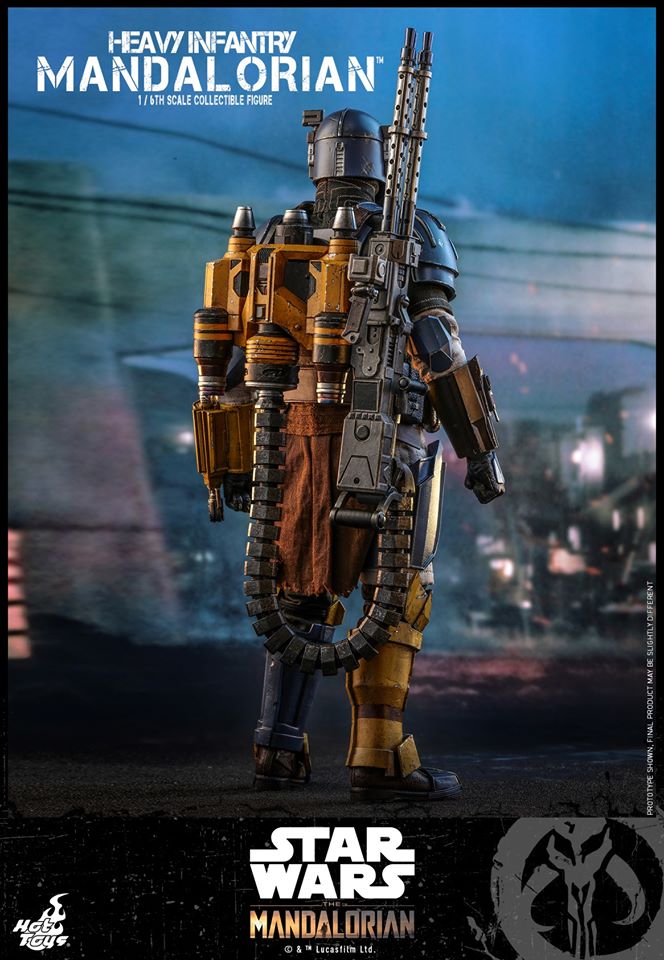 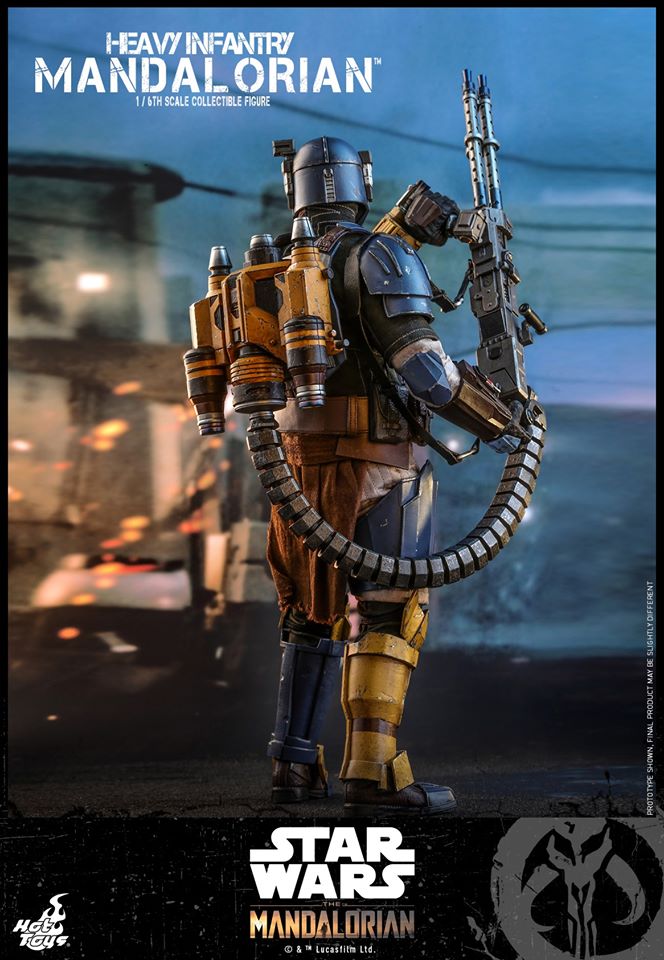 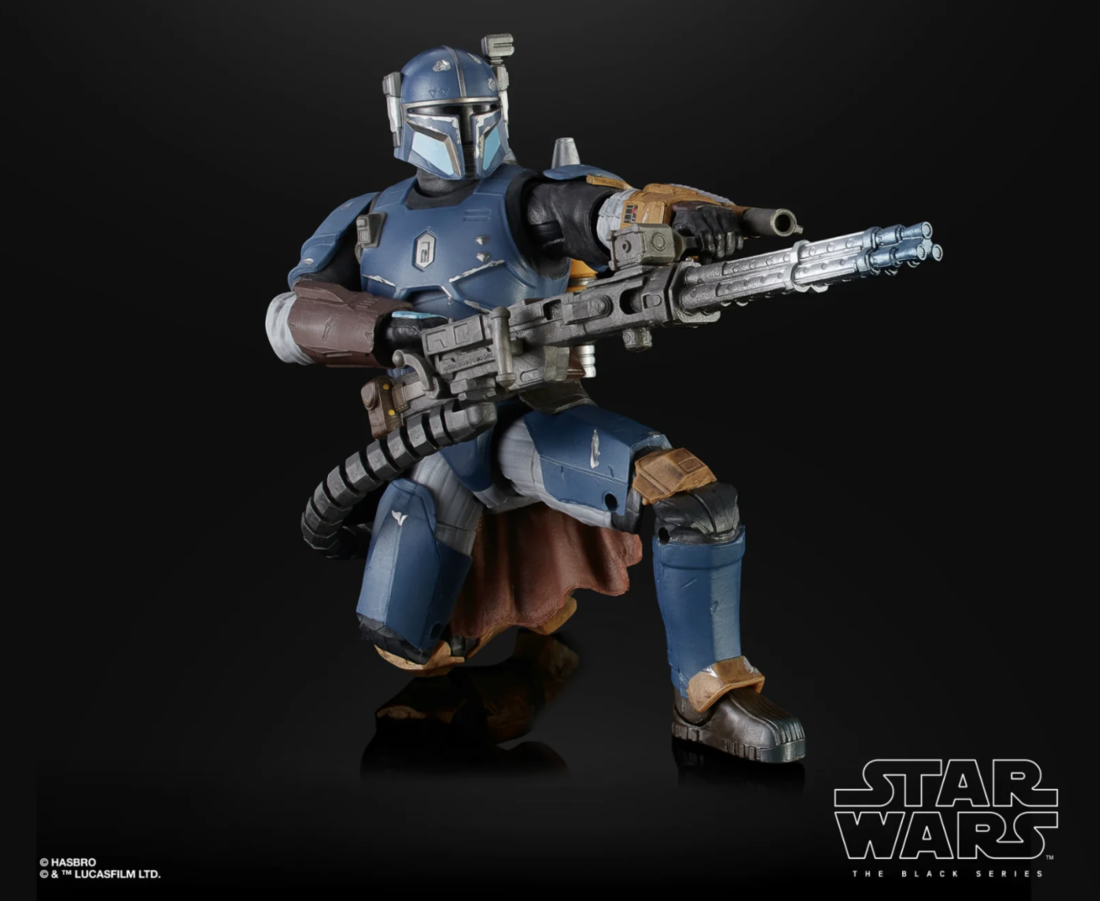 But I'm still faced with the problem; What is his gun based off of?

Star Wars in known for using real weapons as bases for their blasters. The Sterling for the Stormtrooper blaster series, the AR15 for the Rogue One rebel gun, the Lewis gun for the Sandtroopers, and so on. Likewise with the Mandalorians pistol being a 1894 Bergmann No.1. Naturally I figure the heavy Mando's gun would be based off of something from our world. However I have had no luck.

I figure if it is based on a real firearm it would be a LMG/HMG (with one barrel of course) from around WW2 and onwards. The side handle almost looks like a MG42 charging arm, and the rear grip looks like a sideways M2 Browning handle. It also looks inspired by the aliens smartgun with the foregrip.

Otherwise I don't know what else would help identify it. I was actually surprised nobody figured this one out yet.

If anyone can help with identifying what went into making his heavy rifle, I would really appreciate it.

The barrels look like they are based off a MG34, the same gun used for a DLT-19

Possibly. Though I think the barrels look a bit thinner on the diameter

Also I had a thought about the main body, maybe its not a machine gun like a mg42, but more along the lines of a projectile launcher like a 40mm grenade launcher turret

Well I just spend a considerable amount of time looking at different machine guns and I think your first guess is pretty good. After looking at the various guns I still think the MG 34 is the barrel (though they are not likely they are real barrels and could be smaller and fine tuned differently than the originals). It is hard these days to see if particular details are pulled from real objects or 3D modeled and printed. Just for ease for others I am including a picture with these guns in the spoiler tab below. 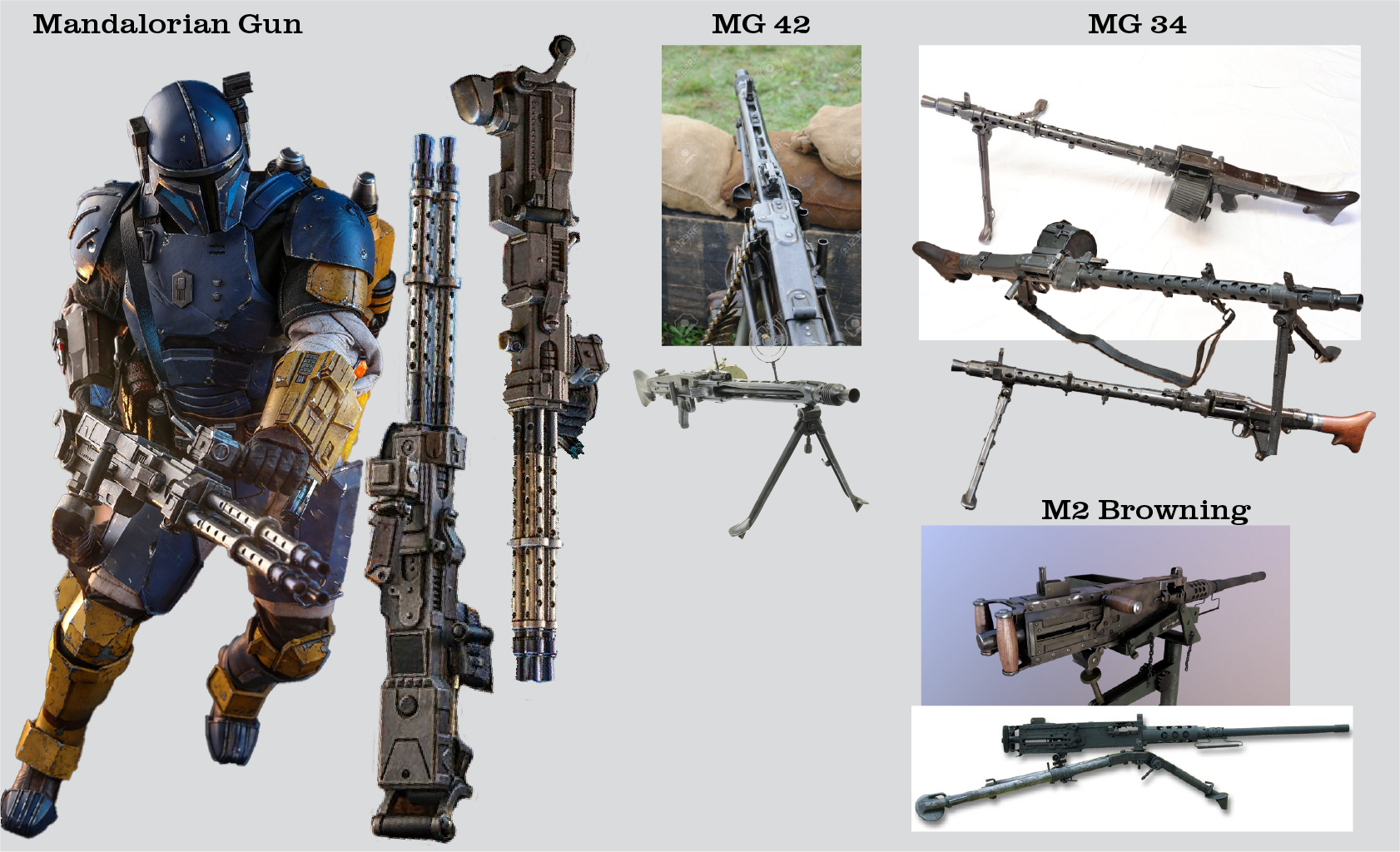 Numbskull said:
Possibly. Though I think the barrels look a bit thinner on the diameter

Also I had a thought about the main body, maybe its not a machine gun like a mg42, but more along the lines of a projectile launcher like a 40mm grenade launcher turret
Click to expand...

It sure has the thickness of a grenade launcher, but is does have the details from a MG 42: 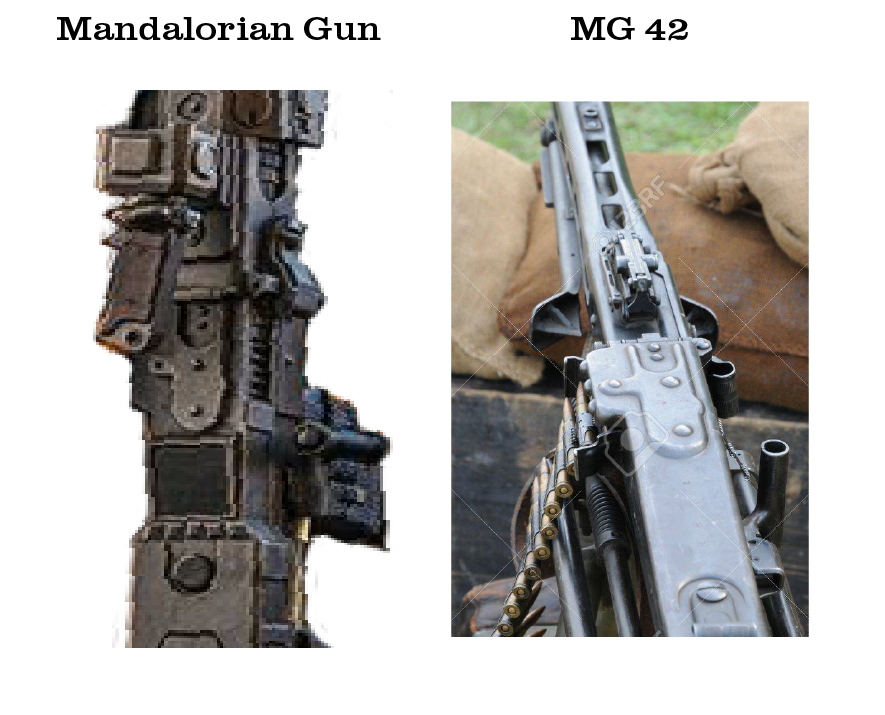 RPF PREMIUM MEMBER
It could be some real gun. To me it looks like a shrunken down Vulcan aircraft cannon. You know the G.E. M134 Minigun? The Vulcan is what puts the “Mini” in Minigun, alrhough these FL gators tended to mind their own business.

RPF PREMIUM MEMBER
It looks to me like a custom creation, inspired by the MG34 and 42.

Am I seriously the only one who sees the resemblance to the DL44/MG-81 flash hider?

Unless that's a very small man, I doubt it's a real firearm. It seems built around an upscaled MG42 receiver cut off somewhere in front of the barrel change door with barrels closer in size to that of the MG-81, but perforated in the style of an MG-34/M1919.

GrenadeKing said:
Am I seriously the only one who sees the resemblance to the DL44/MG-81 flash hider?
Click to expand...

I see your thinking, and I think you're damn spot on. The muzzles on the barrels seem like slightly shorter DL44 muzzles, if not exact copies


ZeroSum said:
It looks to me like a custom creation, inspired by the MG34 and 42.
Click to expand...

GrenadeKing said:
Unless that's a very small man, I doubt it's a real firearm. It seems built around an upscaled MG42 receiver cut off somewhere in front of the barrel change door with barrels closer in size to that of the MG-81, but perforated in the style of an MG-34/M1919.
Click to expand...

Some of the details are pretty stark, like the stamped details. I would say they probably did a press mould, like heat forming, but the SW gun has sharper lines with depth rather than soft bumps. I think a lot what TK posted earlier is spot on. I see what he means by the barrels

So the main body is a sawed-off MG42, with three MG34 barrels capped off with DL44 flash hiders. There's a browning style rear grip and the MG42's pistol grip acts as the forgrip. Then there's a tonne of gribbles added. Looks like a large hose over the original barrel inside the shroud.

I think now that people have shown me these pictures, I am finding it much easier to understand how this thing was probably build. I think I have enough reference to start my planning!

Numbskull said:
So the main body is a sawed-off MG42, with three MG34 barrels capped off with DL44 flash hiders.
Click to expand...

Though the flash hiders on this gun look similar to a MG 81 flash hider (used on a DL44), they are not the same. Here is a picture to help illustrate: 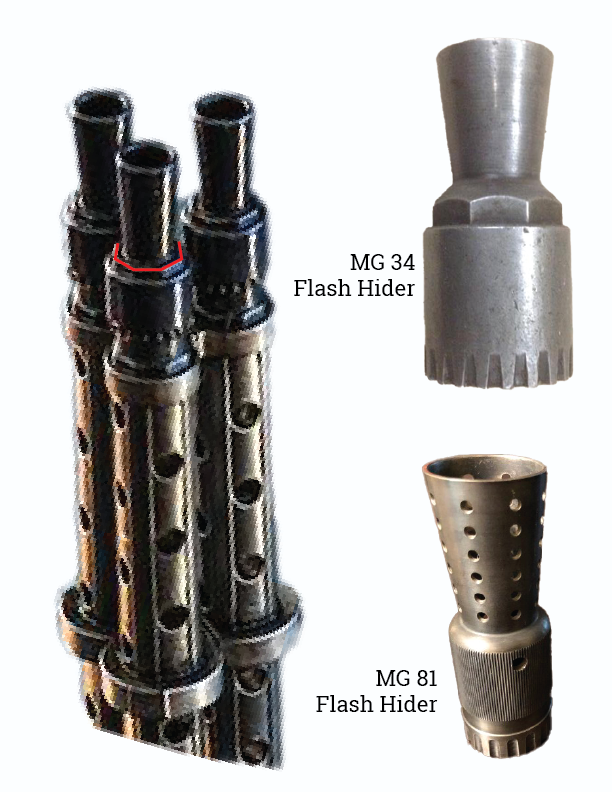 Note the octagonal shape on the Mandalorian Gun (marked in red on one of the barrels. The MG34 flash hider also has this, thus supporting the idea that the barrels are from an MG34. The reason I think we thought it was from a DL44 was the fact the flash hider is so long, but I believe they had a 3D scan of a MG34 and simply lengthened the flash hider (The same idea that the barrels are not 100% the same on the Mandalorian gun as the real gun, they were tweaked by the prop makers).

The picture of the MG-81 flash hider comes from this awesome thread: MG-81 Flash Hider Restoration for Nick

These are the pictures I am using to reference for the gun: Hot Toys : The Mandalorian - Heavy Infantry Mandalorian 1/6th scale Collectible Figure

I can see that it is a lot harder to duplicate guns from Star Wars compared to the OT, where the guns were real with added bits. Now they have scans of guns and tweak them to their liking making it difficult for us.

Can't wait to see what you come up with Numbskull!

I think "inspired by" is the key phrase here.

I'll agree that the flash hiders are certainly inspired by MG34 flash hiders. Given the picture, that's pretty evident but, the details don't quite line up. Other than being elongated, the prop is missing the heavily angled shoulder between the octagonal part and the cone and the locking cuts at the rear are a different shape and depth. The barrel shroud is also very different than the one on an MG34.

I think the whole thing is a mash up of visual inspirations and nothing really off the shelf. Almost entirely custom is my bet.

Could Anyone Identify this blaster rifle?

New Vibro Axe from the Mandalorian
2 3 4