Did the rest of you you know that it’s legal to buy powerful but small lasers? I didn't, but It is. I built an idealized version of the phaser pistol prop from the 60’s Star Trek TV show & crammed one of these legal lasers into it.

Given the risk of permanent blindness, I don't feel comfortable sharing any details about how I added the laser to the prop. Most of you are better prop builders than I am... so my help wouldn't be much help anyway. I will say that the tutorials that I was able to find online were incomplete and could fry the laser. I ended up designing & 3D printing most of the internal bits (battery tray, safety switch mechanism & various little connect-y bits.

If I’m honest, I kinda regret using such a powerful laser. It looks cool, but it’s stupidly dangerous. It can permanently blind someone in an instant. I wired in a safety switch and store it without any batteries…

But still, it’s a laser gun that shoots a laser beam. I'm conflicted.

As for the idealized Phaser 1 & 2. They are a modified Diamond Select toy from the late 90's (IIRC). After hacking it apart I applied thin layers of Bondo to create a smooth & level surface for painting. I used Tamiya paints. The bronze handle on the P2 is silver with layers transparent orange and smoke. I used Haze Grey for the body of the P2. Everything was given a glossy topcoat. The effect is pretty close to "on screen" look of the prop. The P1 was sanded smooth and given a coat of Bondo. I painted the P2 Black Rubber. It's about a 90% grey. For contrast, I gave it a semigloss topcoat. All the metal parts are reproductions that are sold by Jon-Paul Lussier on eBay. The only issue I had assembling the P1 was getting the side rails to fit. On my first go, I didn't clamp them properly and they shifted--getting glue everywhere. After spending too much time cleaning up the mess, it's not too noticeable. If I build another I'll be more careful. Oh, another tricky bit, for me, was aligning the metal emitter to the P2 body.

The dial on the side is in the wrong position because It's the safety switch & it's in safe mode. 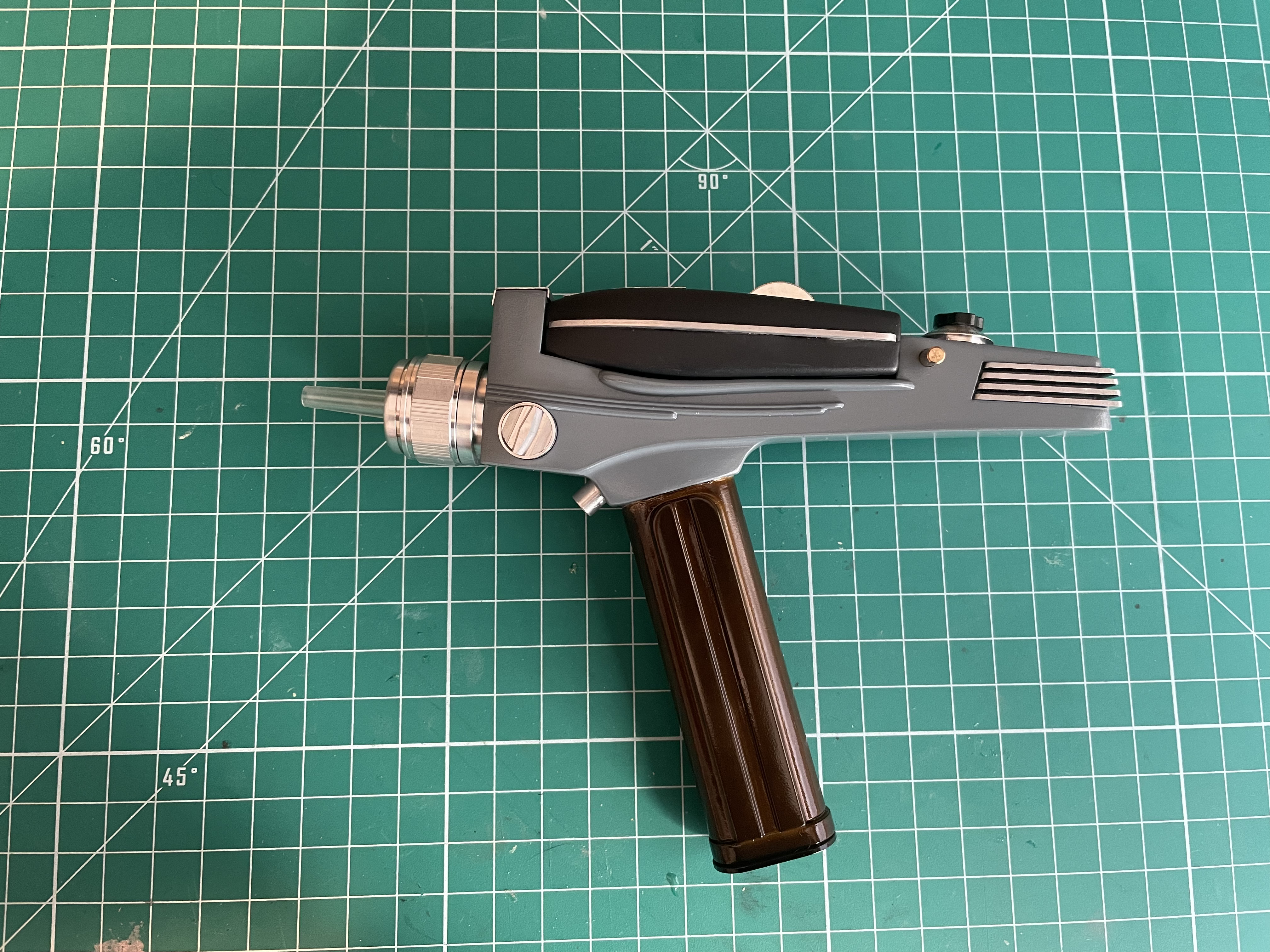 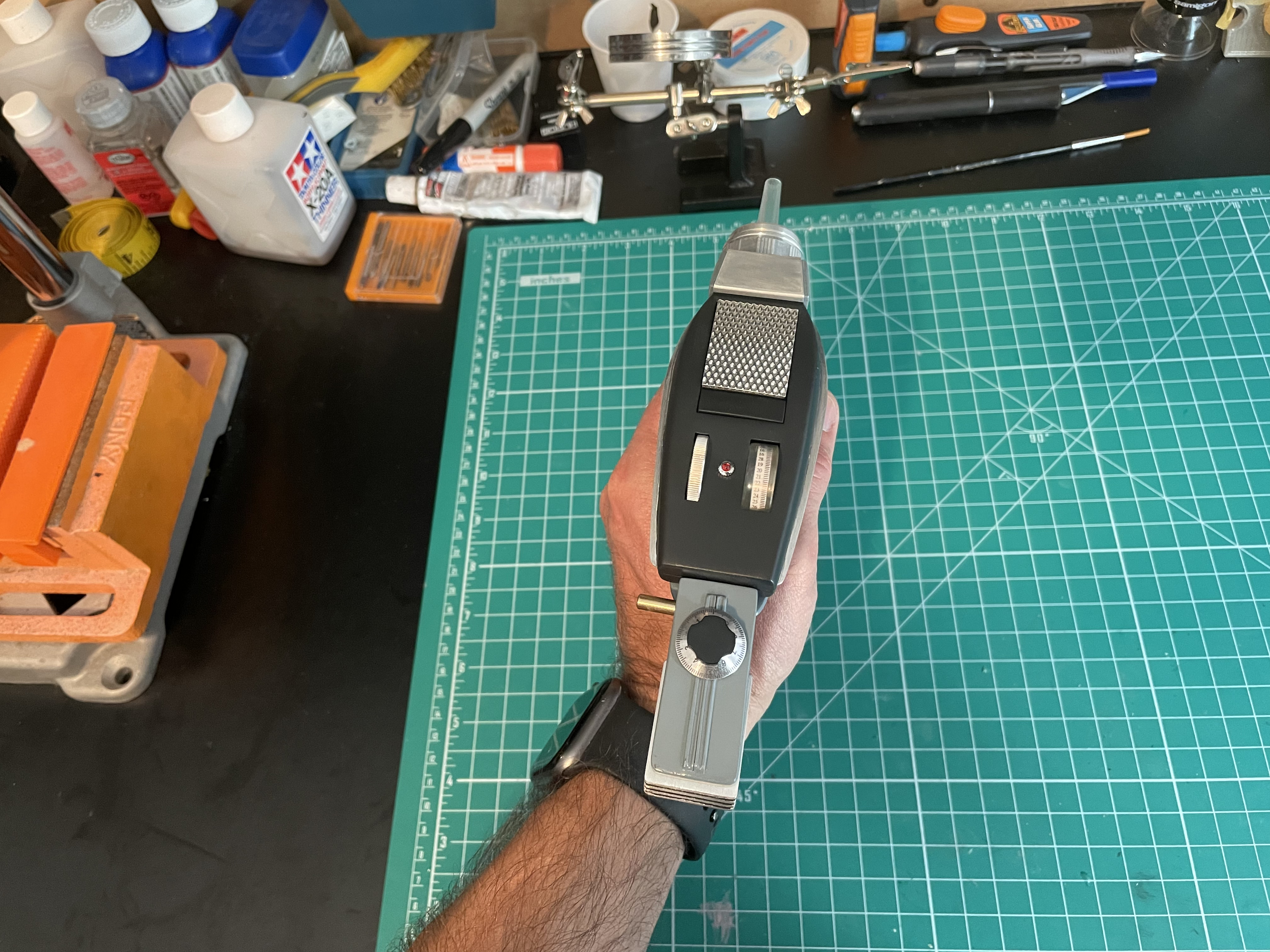 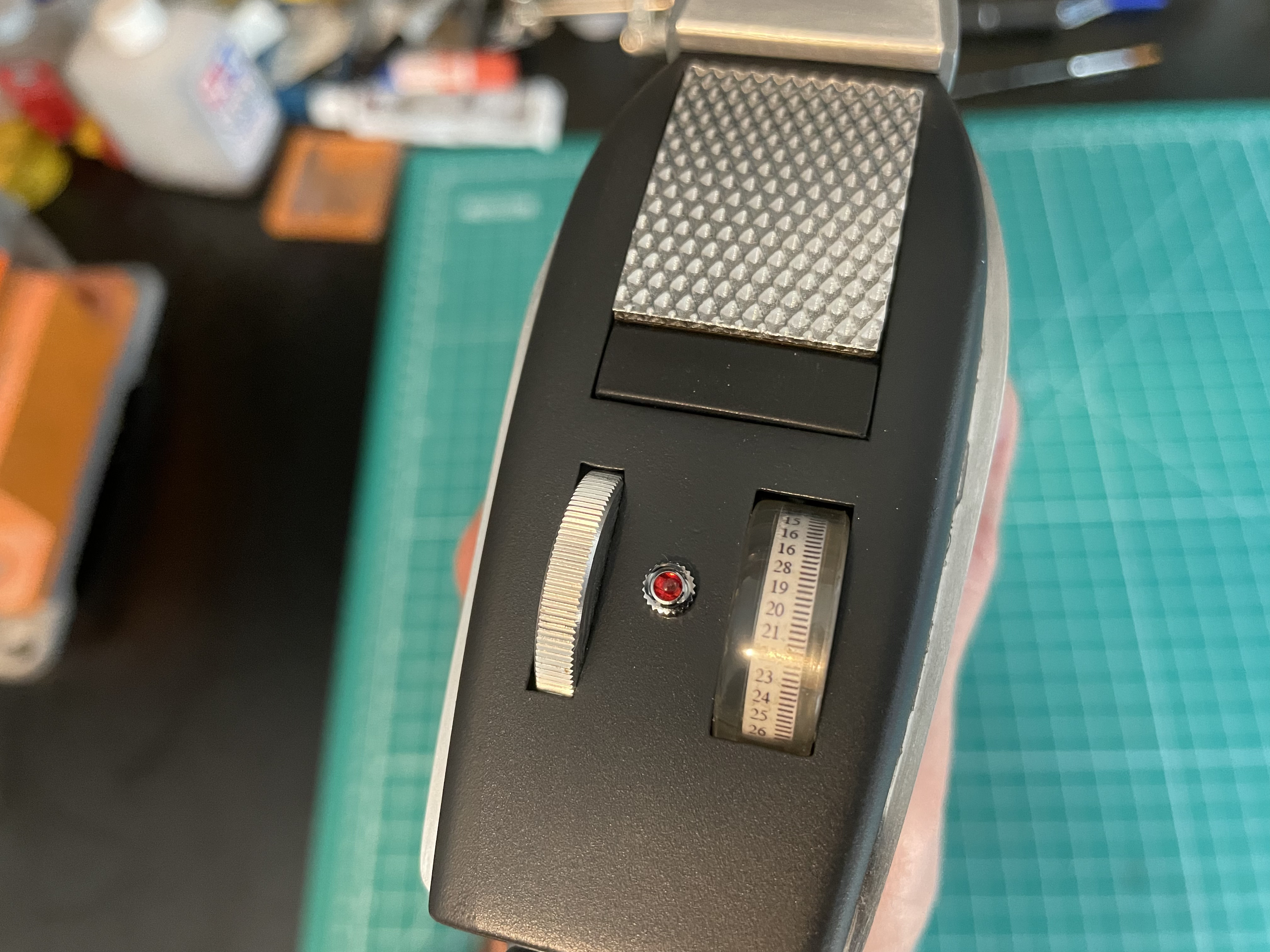 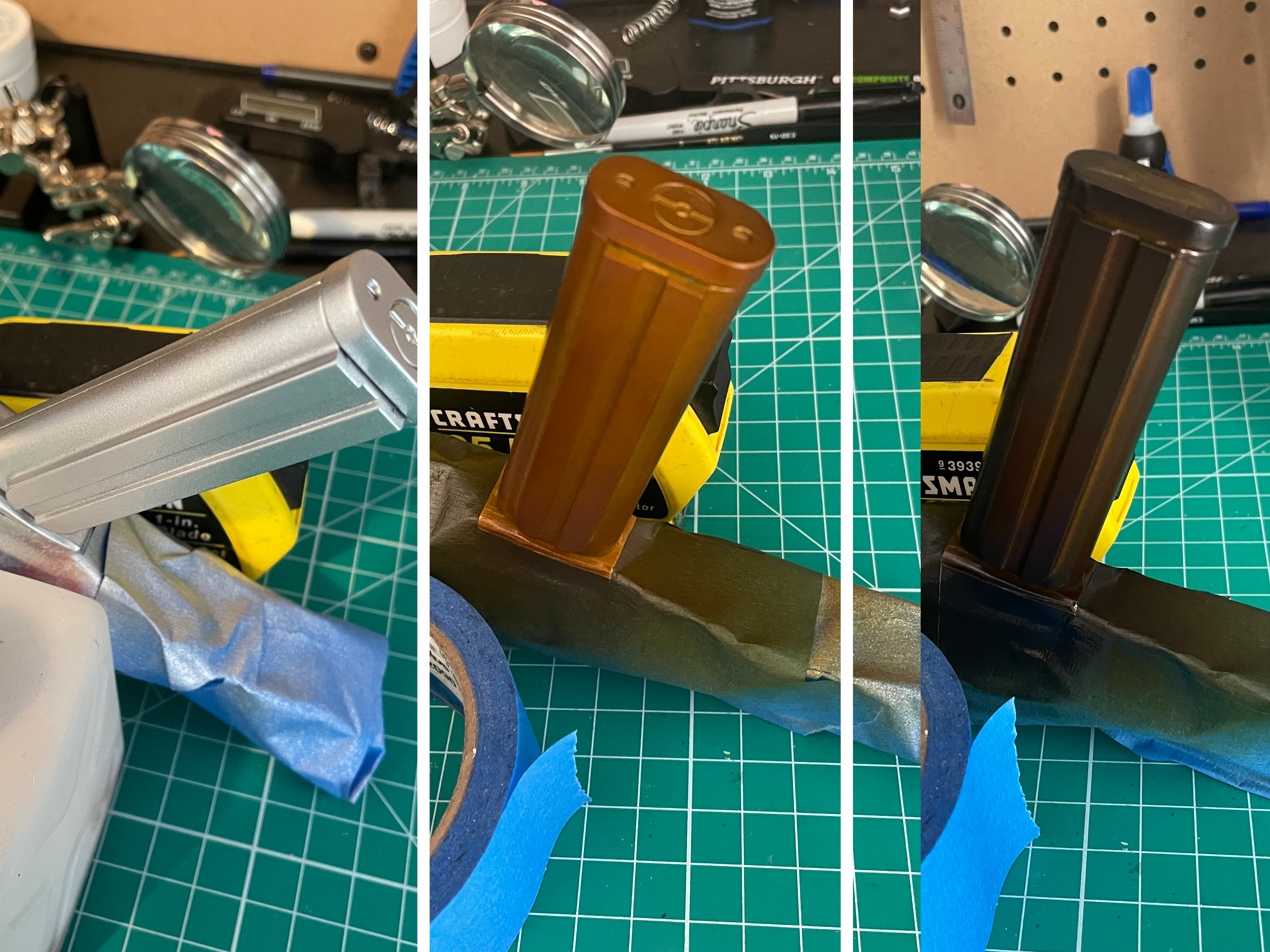 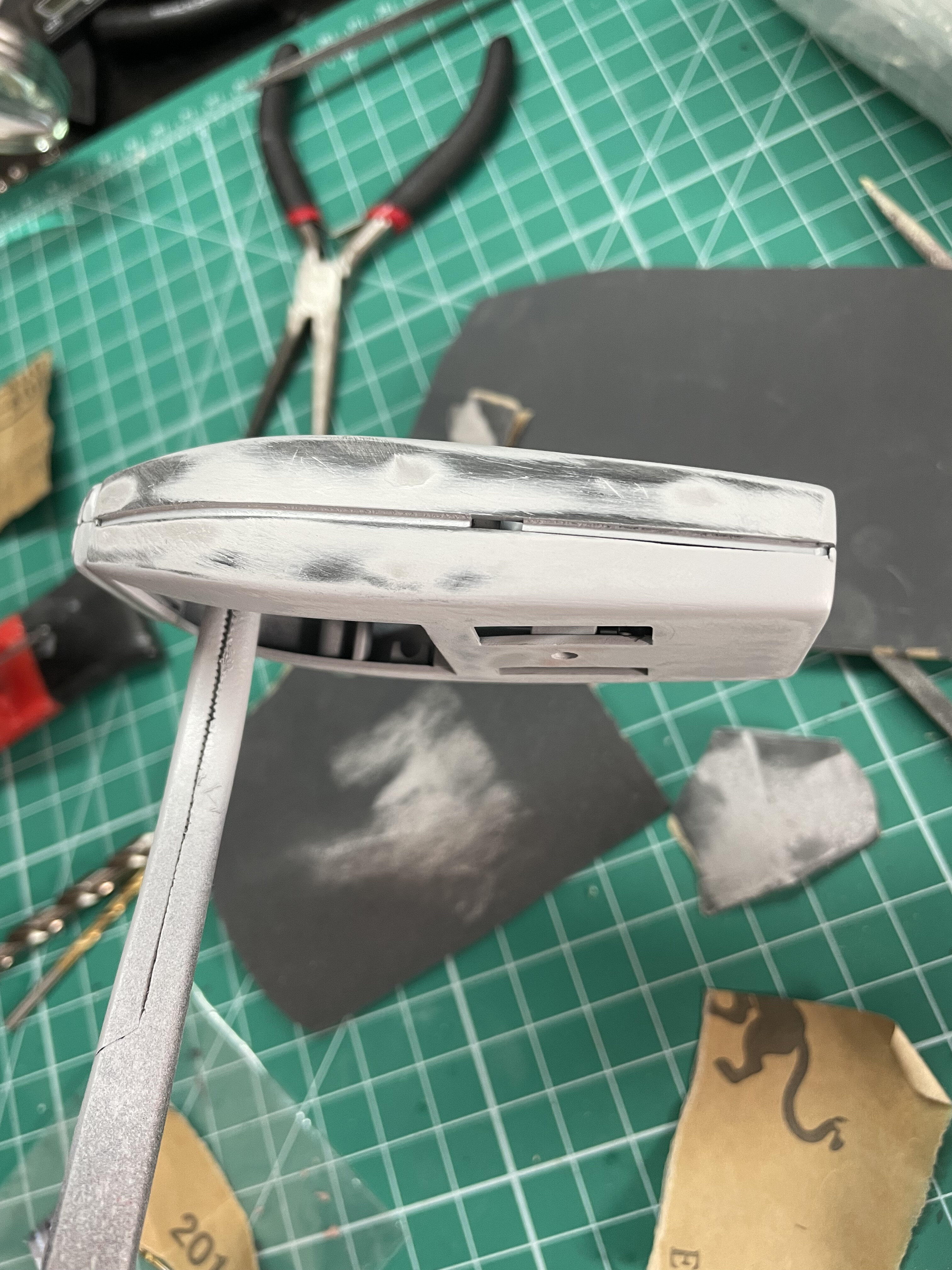 RPF PREMIUM MEMBER
So are you going to call it your "Red Ryder"?

dkaniel said:
So are you going to call it your "Red Ryder"?
Click to expand...

“You'll shoot your eye out, kid”

RPF PREMIUM MEMBER
That is cool as hell!!
Don’t sweat the whole “blinding someone” thing. It’s all relative. If you owned a prop knife would you be concerned that it could stab someone? How about an air soft prop gun. Pretty sure that would blind someone. Live fire Indy gun? Sandman flame gun? JP Jeep? Hell, even a baseball bat can cause serious damage.
So long as your responsible with it don’t sweat it.
The real question, can you light a fire with it!?

Funky said:
The real question, can you light a fire with it!?
Click to expand...

I was loving it up until the point you said you wouldn’t share how you did it! LOL

NakedMoleRat said:
I was loving it up until the point you said you wouldn’t share how you did it! LOL
Click to expand...

LOL, all I could think of was the headline "Popular forum shuts down after 10 year old blinds his classmates -- and it's all genZOD's fault!".
Last edited: Jul 1, 2021

ScoobiJohn said:
i actually started a similar project a while back - but the assault phaser from star trek VI (even making it from metal though that has hit a few stumbles but will hopefully get past them soon) - sadly the laser i got has a slight purple hue to it and is really quite difficult to see even though its powerful enough to pop balloons and start small fires etc - also with the power of the laser i felt i had to further protect my eyes by wearing protective glasses which basically ment i could see the laser point but no hint of the beam -

would be interested to see what laser you are using and if they can be got in the uk
Click to expand...

To get violet or red to be visible you'd need a laser that is way more powerful than is legal in Europe and the UK (I think it's 5mW max, 1mW for a pointer). In the U.S. (MERICA!) we can buy any laser that we want, but laser pointers are limited to 5mW. At 5mW, green's Rayleigh scattering should be reasonably visible. You might see blue, too. I'm by no means an expert. I'm sure another forum member can correct me. Green is still dangerous to people's eyes (even at 1-5mW), because we are so sensitive to that wavelength.

Funky said:
The real question, can you light a fire with it!?
Click to expand...

you can get them - they just aren't ment for laser pointers - the one i was using was 100mW - supposed to be used for laser engraving (am guessing yours is much higher seeing how quick it lit that fire!} - but the legality of installing it in a phaser i dont know
T

I plan to do this myself. I also want the blue, not purple or green.

And yeah, safety is a consideration. I'm actually going for the minimum power possible for a blue laser instead of maxing out. I still won't consider it eye safe though.

Trebor said:
I still won't consider it eye safe though.
Click to expand...

Good! The problem is, even the reflected light or the speculation reflection can damage a person’s eyes, so someone else looking at it or catching a reflection off another object can be in danger and not know (realize) it.
The other problem is that the LASERs are not all made to very exacting specs. Some are far more powerful then they should be or in a frequency that isn’t the same as the safety glasses they provide with it. I have “played around” with a lot of these and always had that dream in the back of my mind of having a “working phaser”. Once my children are grown and out of the house, I will probably still go for this, too cool

Trebor said:
I plan to do this myself. I also want the blue, not purple or green.

And yeah, safety is a consideration. I'm actually going for the minimum power possible for a blue laser instead of maxing out. I still won't consider it eye safe though.
Click to expand...

RPF PREMIUM MEMBER
Keep that puppy secured when not in supervised use. Lasers be scary how they can instantly ruin vision and many don't take them seriously. _Preachy mode off_
T

ScoobiJohn said:
your problem will be that getting a blue laser that you can see the beam seems to require them to be pretty powerful - mine is only just visible at 100mW in a slightly misty night - where as i have a green laser thats 5mW that i can see clearly in clean air - now as i said my seems more purple than i had wanted so its possible mine is emitting partially into the ultra violet - but i have read that blue lasers are much harder to see
Click to expand...

Good to know, thanks