I Got A New Costume Into The 501st Legion!

I accomplished something last week that I am EXTREMELY proud of.

Backstory: October 1997. Dark Forces II: Jedi Knight has just released for the PC. Being the huge Star Wars fan he was and still is, as well as a fairly avid PC gamer, my father purchases the game and brings it home. I see him playing one day, and become enamored with the game, so I sit down to watch.
By the way, if you're unaware of this game, GO FIND AND PLAY THE SERIES. Or watch it on YouTube. I don't care. Just go!
Keep in mind, this is 1997, two years before Phantom Menace had even come out. The cutscenes were done in FMV, with real actors, which meant actual, rotoscoped lightsaber footage. The first since Return of the Jedi in 1983, 14 years prior. The very first lightsaber you see in the game isn't red, blue, or green. It's yellow. (The ACTUAL first live action appearance of a yellow saber. Screw you, Rey. Your saber is actually gold anyway, according to the designer) Being that this lightsaber was a new color (and is also my dad's favorite color) I naturally became enthralled by it, and it remains to this day my absolute favorite lightsaber in any Star Wars media. Consequently, the character who wielded it, a young Dark Jedi named Yun, became my favorite character in the game.

Fast-forward to 2019: I've been working conventions and been truly into the cosplay/collecting hobby for several years. I've had contact with an officially sanctioned group known as the 501st Legion for several years. I finally put a plan into motion.

October 2021: the game's 24th anniversary. After more than two years work on the logistics with the 501st, and 6 years of work on my costume, I became the 501st Legion's first (and as of right now only) official Yun costumer, the only other character from the series to be recognized by the officially sanctioned Star Wars costuming groups other than Kyle Katarn himself. Here, you can even see the CRL:

https://databank.501st.com/databank/Costuming:Yun (this is where you can see my version. Didn't want to post too many pics here for sake of up/download speed, although I know most people probably have much better computers than I do )

This has been a lifelong dream realized. And for me, it "will be a day long remembered."

Yun in a cutscene in the game, played by former Chicago newscaster Rafer Weigel.

My replica of his lightsaber. An extremely rare lightsaber at that! 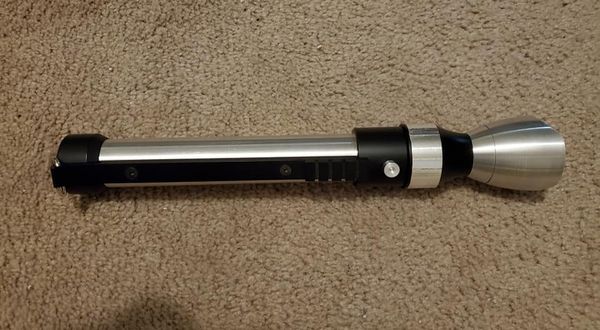