How to Encapsulate a Black Widow in Resin?

Hello All, I have been finding all sorts of cool looking black widows in my backyard. I wanted to put one into urethane/epoxy resin to make a shift knob for a car or even a cool looking staff. I tried encapsulating one but the guts (TMI) kept oozing out of its belly/abdomen. What is the trick or any advice to accomplish this? I've been reading/watching videos about how they would freeze a spider or submerge it into a mix of IPA Alcohol and Water. Thanks.

Most resins heat up as they cure, some get VERY HOT. I don't know if that's your problem but it's a place to start. Also, you aren't pressure casting are you?

robn1 said:
Most resins heat up as they cure, some get VERY HOT. I don't know if that's your problem but it's a place to start. Also, you aren't pressure casting are you?
Click to expand...

Thanks robn1 for your reply. I have used BJB Enterprises WC-792 urethane resin with a 30-min pot life. It does require heat cure and pressure casting but I refrained from doing any of those things. I actually just poured the resin in a polypropylene shallow dish and let it gel up overnight. It usually gets fairly hard at around 24 hours. I didn't apply any heat or pressure. I have attached an image where I just laid down a thin layer of urethane resin with red pigment. It was all good until I started seeing the abdomen ooze out stuff next day. 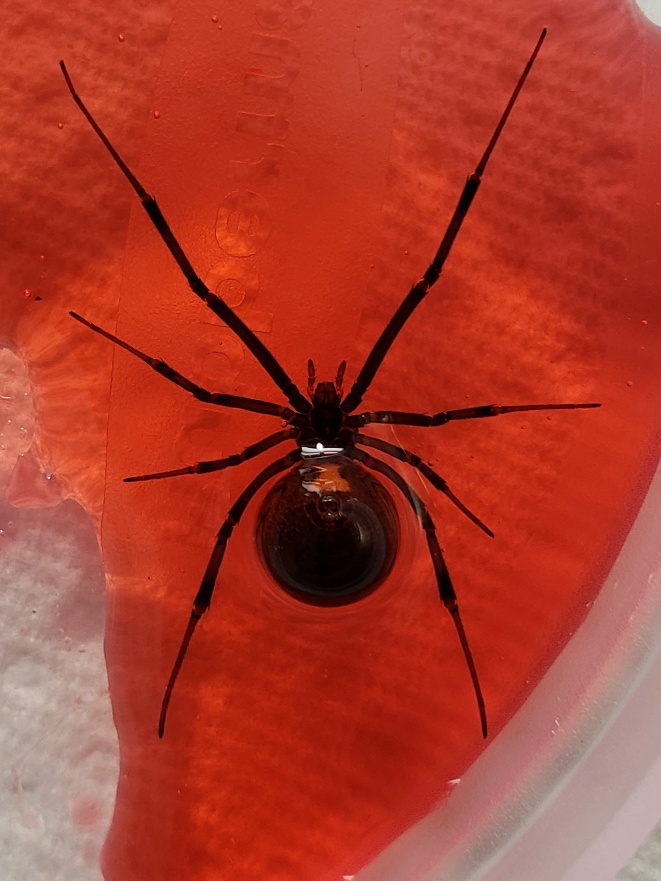 I've never done anything like this so I have no advice to give. There must be a few Youtube videos that could help.
Last edited: Jun 2, 2020
C

When others do this for 'amber' or whatever... (and other 'bug types').. (or collectors in museums..etc.. is there a process before being 'pinned' for life?)

Do they do it with live and/or fresh bugs?


Do you have any 'long been dead' to try this with? I would imagine no 'guts' to worry about then?

If you do a search for how to preserve insects in resin, you'll find numerous articles and videos describing how this is done. One article that I took a quick look at mentioned soaking (larger) specimens in denatured ethanol for several days to dry out the water inside the insect.

Techniques for Encasing Insects in Resin

Insects are encased in resin using a process called casting. During this process, a synthetic resin is mixed with a catalyst, or polymer, which causes the resin to harden. The mixture is then poured into a silicone mold and an insect is placed inside the mold. Once the resin dries, it will be a...

I think robn1 was on to something about the heat causing some issues, and Riceball's advice is something to look into as well. The bug wants to be sterilized to a certain degree before encapsulating. Riceball's suggestion should help desiccate the bug too.

Here's an example of something that went wrong: Years ago, ILM made some crew gifts that had an apple encased in clear resin ( I don't recall what film). They took regular apples and poured resin over them in a mold, and they looked great... for a while... Naturally occurring anaerobic bacteria on the apples eventually started to cause the apples to decay. Yes, in the resin. Crew members were able to watch the apples slowly rot away - safely encased in their resin tombs. Eventually the apples just became goo.

Cimmerian said:
Sounds morbid but perhaps you could bake the dead spider first at a low heat to dry it out or syringe the innards out first
Click to expand...

Thanks. I will try that next time.

Thanks everyone. I'll look into the denatured alcohol idea. I believe that is the ticket.

I knew someone who bought dead scorpion souvenirs that were lacquered, glued to leather boards, and covered in a plastic bubble. Parasites began to eat their way out from the dead scorpions, but remained trapped inside the plastic bubble. Little writhing worm things. It was disgusting. You will want to make sure every microbe on the black widow is completely dead.

I'm working on something similar and stumbled across this post. Did you end up having any success with this project? I have a live specimen I need to kill and preserve and I'm having a lot of trouble finding any decent resources on preserving comb-footed spiders with large abdomens.

My biggest fear is that even if the guts don't bleed out while the spider is curing, I've heard the abdomen can often begin to decompose and shrivel while inside the resin. How do your casts (if you kept any) look after a year? Did you do anything to treat them before curing them?

I know this is a little technical and "wordy," but here's a great academic journal article that I came across (Journal of Insect Science) that outlines the process of casting insects in resin (complete with highly detailed instructions) from start to finish. I used this last year when I was making some Jurassic Park John Hammond cane toppers with crane flies (after I got frustrated with the guts exploding out of some of my best specimens). It worked great for me and the ones that I prepared this way (TLDR: soak them in 70%-80% ethanol overnight and then allow to air dry for 5-30 minutes before casting) are still holding up now about a year later.

I did see the abdomen shrivel/shrink post cure. And it did ooze out some "stuff", sorry...TMI. I would recommend drying it out for a good while (maybe a week?) and then cast it? I am even thinking of aspirating the guts out and refilling with a small amount of silicone or quick cast of urethane to preserve the shape of the black widow's belly.

This is great, thanks! Does your cast require heat cure and pressure casting?

I’m pretty sure if you tried to encase a black widow in resin, Tony, Steve, Bruce and the rest would stop you.