How many Sabers is too many?

RPF PREMIUM MEMBER
How many lightsabers do you have in your collection? how many more do you want? how many times does your spouse say enough is enough?
Myself, I have 18 and would like about 6 more. But I will probably call it done once I get a Roman's MK1. My spouse occasionally worries about the money, then I remind her of the large shoe collection she has and the $150 to $260 jeans she buys. Its all relative to your interests.

I now own three.

RPF PREMIUM MEMBER
I know this is a cop out to your answer but it really matters on you collecting passion.

I remember a member Jediscout who seemed to collect every hilt. And I think lightsabers was all she collected. Not just character design but she might also buy some one else's version. Unlike say someone like me who if they got a better version of hilt design, I would sell the older one to recoup my costs or reinvest in a new prop for the collection. 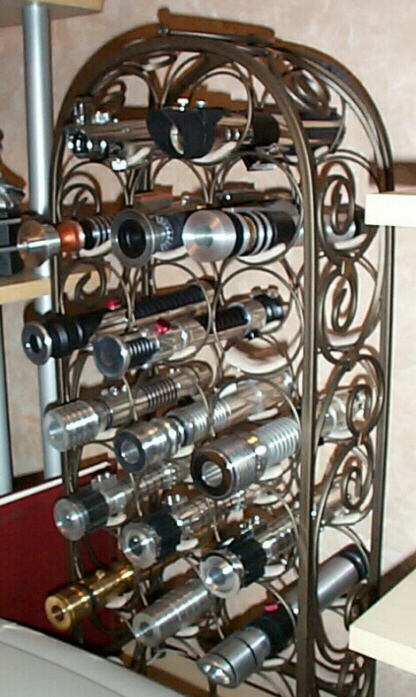 The above photo was probably taken around 2000 or 2001 there is 16 in that photo and I probably had 3 to 5 more that were displayed in other ways and most likely 1 or 2 on the way. I had only been collecting seriously for a couple of years. I had already swapped out some for better versions including selling off my Icons. As you can see, at the time, everything was fan made as Icons was already out of the game and MR was still in the early planning stages. I liked the Mara Jade hilt so you will see 3 or those from different designers and 3 on the bottom I made myself because at the time I had access to a lathe.

Currently I have 29 (28 if you count Ahsoka's double saber see as one). These days most of them are licensed (MR, eFX, Hasbro) and 10 are fan made. 5 of them are FX (4 licensed). 2 are small replica padawan hilts (1x jedi gear, 1x fan made). Over the years, I got rid hilts that were duplicates, or non-character customs, or designs that were no longer considered canon (all with some exceptions) and I gave an FX Mara to my daughter. I have also found myself trying to limit myself to what I really like. I tend not to have a desire to collect the sequel hilts. I might if let's say a Kylo FX came up on sale super cheap. I also felt at a time that the hilts were overrunning my collection so I started working of acquiring more blasters and other prop replica other than hilts.
Last edited: Sep 6, 2020

RPF PREMIUM MEMBER
How many sabers are too many?

My friends and I were able to get a genius answer from him, on a similar topic involving Tootsie Roll pops.... 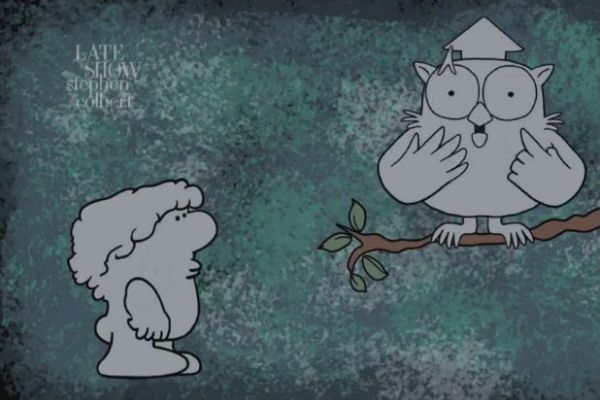 Not enough if it's your passion...then again; there's a fine line between passion and obsession My take is: do what makes you happy!

I have 3 total.
- A Parks Saber "Avenger" I believe, My Wife got that for me when we were still dating back in 2006 - 07. It looks like a slightly customized version of Luke's RoTJ.
- A Koribanth Graflex 2.0 that I got in 2016 It is empty more or less, just for display. It is made up to look like the ANH Hero.
- A second Koibanth Graflex 2.0 that I also got in 2016. It has a full custom crystal chamber inside that I made from scratch with brass an aluminum stock. It is made up to look like the TFA Hero.

I've seen enough Rule 34 to know where THAT night went.

ALLEY said:
How many sabers are too many?

May friends and I were able to get a genius answer from him, on a similar topic involving Tootsie Roll pops....

one, two, a three

RPF PREMIUM MEMBER
This was several months ago. I am now setting up a new display while I work to make a more accurate OWK out of the korbanth, until I get a Roman's MK1

Jediscout (if she's still around) had a great story about a neighbor asking a similar question of her collection.


I actually sold a few years back so I probably only have 8 now. I'm not married yet, but she'll know what she's getting into beforehand!

Funky said:
then I had this hot girl come over for a date
Click to expand...

Since I build my own, I suppose there is no limit. Of course, I have no one telling me otherwise, so... I've thinned the collection by selling or giving some away over the years. Currently I'd say I have about 30 completed hilts, about 8 works in progress, and 12 bladed designs.

Sluis Van Shipyards said:
Jediscout (if she's still around) had a great story about a neighbor asking a similar question of her collection.
Click to expand...

IIRC she had some workmen over doing some repair work in her basement where her sabers were displayed all over the walls the the repair guys seemed super nervous and one of them finally asked her why she has so many gun silencers. They thought she was a hitman (hitwoman?).

For me, it's about quality over quantity.
I'd rather have 1 all real parts Ben Kenobi lightsaber than 20 different low-quality, mass produced replicas.

RPF PREMIUM MEMBER
This question is like asking how many Darth Vader helmets do you need? Oddly, I didn't think I had that many sabre hilts -- then I started counting, lol.

I only had to sell one of my kids to finish my collection. 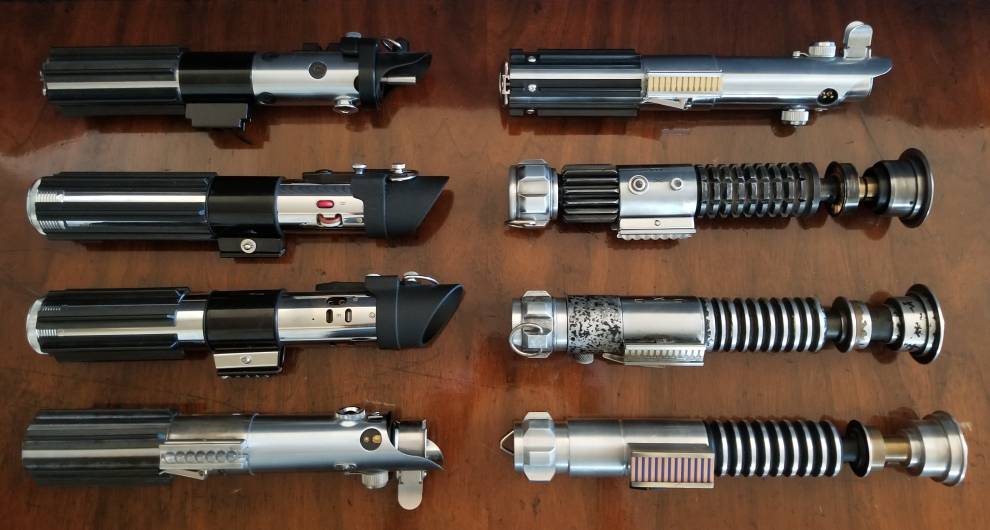 C. never too many!

26 completed, including my real parts Obi-Wan.
Another 4, or so, in the works (very slowly, albeit).
A real GRAFLEX is still a dream, that one day I'd love to obtain. & a real MPP is the unattainable dream.

So to answer your question.... lightsabers are like chips. You can never stop at just one.
Last edited: Sep 8, 2020

With my KR Leia on the way, I'll be up to 13. But, it's worth noting that 2 of those are Hasbro FX from like 2010, the ones with the removable blades. 1 is a Kylo I made in 2016 from a toy kit-bashed with a 3D print. And 1 is a SaberForge bday gift from a friend. Few of them are high-end replicas: 1 Roman Obi, one decent ESB Graflex, and the aforementioned Leia. I am also in plans to sell most of them. I'd rather have a very small collection of choice, high-end sabers.

Another Snub-nosed Blade Runner blaster thread because... can you ever really have too many?

F
Original Graflex score. Like new condition!, Has it even been used???