I told myself that the HT Classic pred the First & Only HT pred was i will ever buy .

hahahahahaha. sorry, HT but neca still kicks your ass... this headsculpt is a joke - no likeness at all.

uruk said:
hahahahahaha. sorry HT, but neca still kicks your ass... this headsculpt is a joke - no likeness at all.
Click to expand...

hahahahahaha. sorry HT, but neca still kicks your ass. this headsculpt is a joke - no likeness at all.

damn, what did i do just now... and why can't i delete these posts? sorry Andre, i spammed you in here it seems...

Well i think this is actually a pretty decent likeness, fair play to HT. Not as accurate as Kyles sculpts at NECA but still pretty good.
I gotta get this. I totally missed out on the old one (thank god I did!)
Lookin forward to the new Wolf and P1!

Oh what the hell. Oh, that's right... you've caught the attention of a P2 fan, and not in a good way.

First of all, what the **** is up with the head? Seriously... there's more than enough reference pictures out there of the actual "hero head" from Predator 2. I'm curious to know why the "old" HT P2 was a closer likeness than this? The head looks nothing at all like the Predator from P2. It might as well be it's own thing. What reference are you using? Seriously, scour the internet or look at the Hunters Lair. This resembles neither the stunt or hero mask used. Did you not think we'd notice? Also, what's up with the overly textured helmet? The helmet used in the move did NOT have that much texture on it. It was smooth for the most part. Not riddled with ******** like the AvP helmets. Quit ******* texturing the helmets.

Also, my biggest peave, is that your still using the AVP BLADES. What the ******* hell? With the added scale you couldn't do any better than using the same ******* blades I removed from my "old" P2? Seriously, did we not see the same movie?


In all honesty, I know what you're gonna charge for your 1/6th scale Predator 2. For us normal people, it's going to be a **** ton of money. So, here I will say my part. I bought the NECA P1 and I ******* love it. It has no where near the accessories that the "new" P2 has but you know what? It may be limited in it's joint movement, but it ******* LOOKS LIKE THE PREDATOR. The artist took the time to research the creature, and **** me in the ass.. he came up with an amazing likeness.

So here is my final say on the new HT P2... you can ******* keep it. You're gonna put a ridiculous price on it. Yeah, because you think everything you do is made of ******* GOLD. Well. try again. Your new P2 figure is worse off than the last. You'd think that with a bigger scale there'd be more awesome.. yeah, no. You stuck it with the same AvP blades my old version got. Take the AVP blades and shove them up your ass. I don't want to know what you're gonna charge for these things, but chances are, NECA will beat you.

now that was an awesome post! couldn't agree more.

Not to start a debate but its not terrible, but yeah the first thing i noticed was the head and it didnt look right.But its still a very cool predator and i think it depends on how much money you have, i dont buy much stuff so i save for the 1/6 line and love them as a whole.The 1/4 p2 from neca is going to look right hands down and for 80 bucks is a win.But i dont do statues or random predator props so i am excited to add a clan member in my tribe of predators.They should have done a better job though, or the shaman or ram would have been better.I think the next predator is going to be a 1/4 p1 so we wont see anything new without a 2013 date on it.
Not to debate though but yeah it looks like a different predator than the movie in the face , but the mask and the armor is sweet.

It is nice that they added all the little accessories with this one. It comes with a rebreather? Wow.

I know what you're saying with the helmet, though, and it doesn't make a bit of sense. It's like they completely nail some of the more obscure details, which is awesome, but then the more obviously things like the helmet they just drop the ball. What's up with that? I mean really. How does that happen?

Yeah, the BIO does look too beat up doesn't it?

Xenohunter55 said:
the reason why the bio looks weird is due to the head sculpt
Click to expand...

The texturing is the part that's offputting for me.

I just ordered mine.

It's actually a fairly good price. 220.00...beats what the Samurai is going to cost people.

It's nice to look at, I don't HATE it, but for that price it should be accurate. I'll just get the NECA for 75 bucks or so.

Here are my thoughts on the likeness: the closed mandibles are the issue here. Not so much the sculpt but how they are posed (the bottom ones are half-open at a semi-diagonal angle). Everything else looks great. Either way, I'm definitely liking the closed-mouth look on this guy more than on Classic and Shadow.

Just to clarify some things, the NECA version also had a rough-textured helmet:

I'd also like to raise the point that NECA's P2 mandibles aren't all that accurate either. They, too, went for a more open look and made the tusks too big. Albeit not as much as HT, but still. It's worth mentioning if anyone wants to bring NECA into this (we knew it would happen at some point). 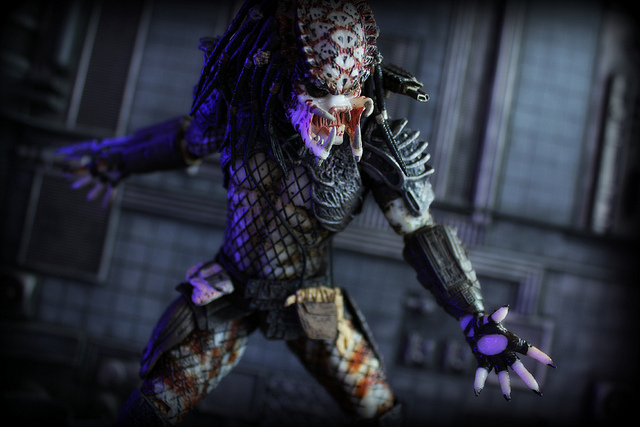 In a nutshell, it's so ordered. Anyone who owns (or has owned) the original HT P2 would be hard-pressed not to see the massive improvements on this one. Everything minus the weapons is a brand-new sculpt and the paint apps kick ass.

I'm not so sure about that. We could very well get another summer exclusive. I'm crossing fingers for Hippie (Shaman).

The body is much improved but........ I just dont see the point in coming out with yet another P2 city hunter in 1/6. Hot toys is really just starting to run this line into the ground. I know they are planing on doing a 1/4 scale line of predators but I really dont see the point of reduing all the predators over again in 1/6 scale (because we all know thats coming) pointless if you ask me, just my to cents.