First, I wanted to mention how great my experience with the Bower's exhibit was, and how nice the staff there is in general. I couldn't have asked for a better experience! Every guest and employee was super respectful about masks, maintaining distance, and being helpful and friendly in general. It's still a risk to go anywhere right now, but this was perhaps the one thing that could have drawn me out of the house. Let's hope I don't get sick and die because of it!

Long story short, for our purposes, I took many close-ups - as close as I dared - of the Machine, specifically without touching it or broaching the stanchions (for the machine is roped off, and rightly so). Ergo some of the pictures look pretty blurry as I had to rely on dodgy camera technology to "zoom and enhance", but I was satisfied with the results.

I have prepared a document, attached, that outlines my interpretation of how the machine's raise/lower and tilt functions may have once worked, based on my many pictures, observations from the films, logical inference, and painstaking research conducted over the course of many years. It's just V1, and will one day soon be clearer and contain more information. I plan to include, among other things, a breakdown of the prop's components (i.e. a better version of the information I posted in this thread 7 years ago), and a detailed history of the prop's life, as it is rather interesting.

That said, your feedback would be tremendously helpful in case anything within is unclear or needs a better explanation.

I hope this obsession of mine benefits you all. It at least makes great bathroom reading.

YES! This PDF is one of the most exciting prop related things I've seen recently! That tilt motor revelation is still FANTASTIC to see!

protonpack said:
YES! This PDF is one of the most exciting prop related things I've seen recently! That tilt motor revelation is still FANTASTIC to see!
Click to expand...

I'm not sure if this helps answer any questions about the rear of the machine but, I found some blurry footage from the old backlot tour from 1989 where you could actually see the shrink machine and some of the other props from the movie. I will add the link to the video where you can see the footage. I LOVE what you guys have been doing to research this prop and I look forward to seeing what is to come!

I found the same video -notice that the rear box has been completely removed, and the machine in the scene only rotates!

Both protonpack and I surmise that the original rear box with its ~6 wire sockets was potentially involved in controlling the axes of movement somehow, as the spiral wire that plugs into the box connected directly to the long rod potentiometers Wayne uses to both adjust the machine's position and bludgeon the prop later in the movie: 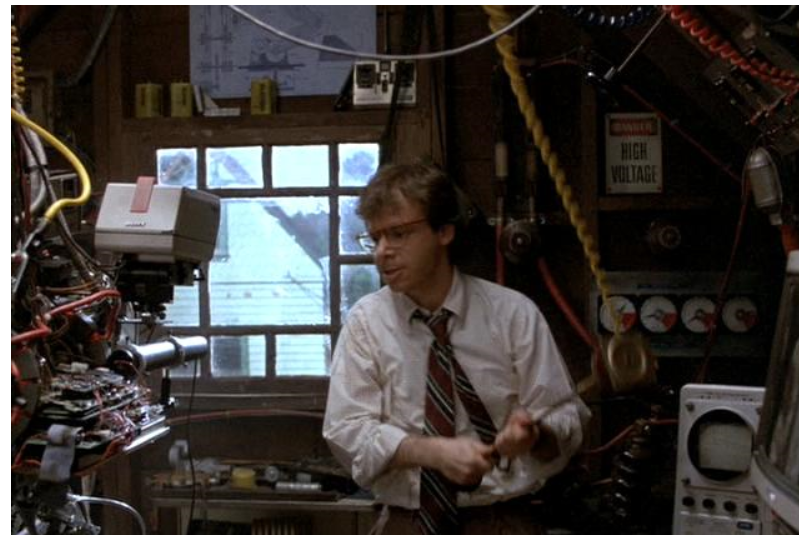 You can see here the yellow, red, and black "curly cables" going into the original rear box: 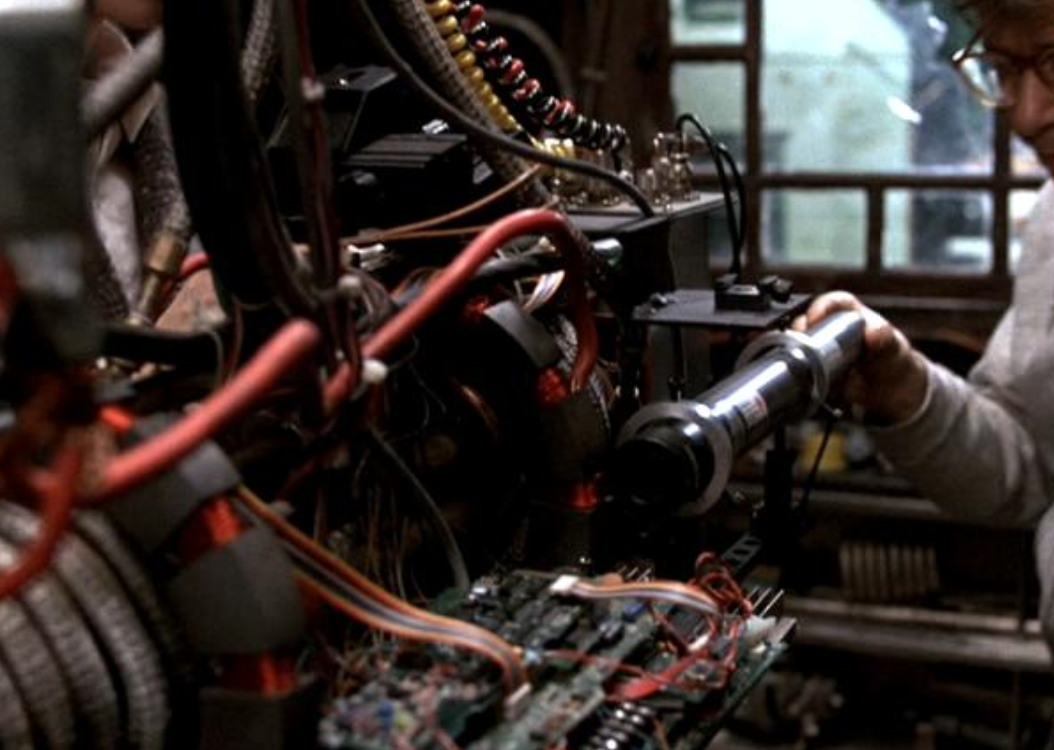 Some aspect of the original rear box was angled and had metal pieces attached to at least one side, as one can observe in both of the following pictures: 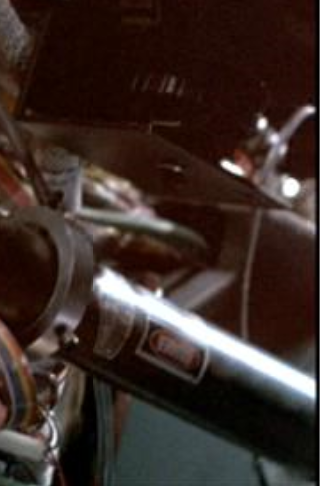 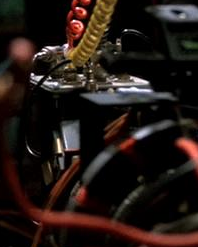 The box itself was pretty reflective, which is one of the reasons its shape is so hard to discern: 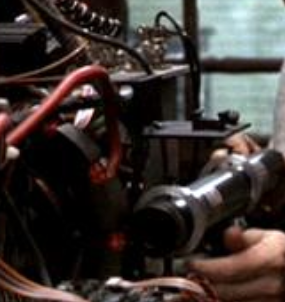 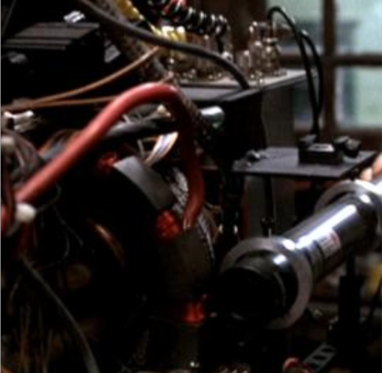 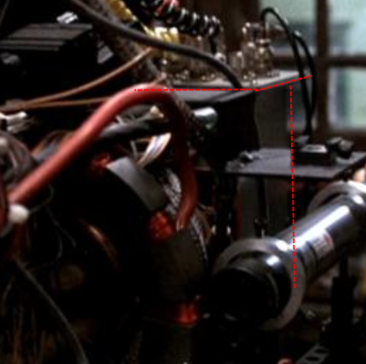 Also, the original "lid" for this box seems to have stuck out beyond the edges of the sides, which you can plainly see here when a little photo manipulation is applied:

By the second movie, which was made after the machine's original tenure at the Backlot tour, the box had been replaced with what looks like a much different, dull (non-reflective) square gray box with one cable protruding from it. With the aforementioned video evidence showing the lack of rear box, this is likely a new piece: 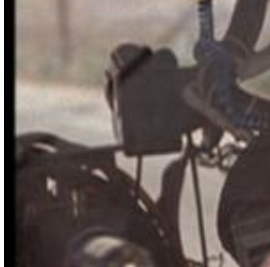 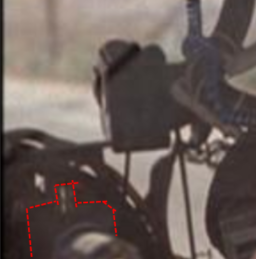 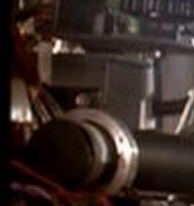 ...and totally lacks the abundance of cabling that protruded from the top of the original.

If both rear boxes were simply cosmetic, why remove it for the sake of the theme park attraction? Why bother putting it back on? There could be a host of reasons actually but they're all speculative and at the end of the day, inconsequential; for me as a prop builder, I'd be amazing to source that original rear component / box / whatever it was - if it can even be sourced - as I'm sure the original creator intended it to at least represent some kind of function - a battery, a power supply, etc - if it was indeed ornamental and non-functional.

Also, notice that the original rear box was much taller than its replacement - nearly as tall as the U-shaped Video Mounting Bracket, which came up and over the center stablizer bar.

So I just binge-read this whole thread and I'm definitely watching now! I was 6 when that film came out and I absolutely loved it (I was also already a big space nerd and so I was really excited about shrinking items for launch and thought someone should pursue such a device lol). Can't wait to see where this goes!

I haven't watched it yet but there is an episode of the Prop show on Disney + that is all about Honey I Shrunk the Kids.

TristanArtSD said:
So I just binge-read this whole thread and I'm definitely watching now! I was 6 when that film came out and I absolutely loved it (I was also already a big space nerd and so I was really excited about shrinking items for launch and thought someone should pursue such a device lol). Can't wait to see where this goes!
Click to expand...

Same!! I came out of HISK wanting to be a scientist...but it wasn't until we went to MGM studios in ~1989-90 ish that I saw what was then called the "backstage studio tour" - which featured HISK as seen in the videos posted previously - and came out of it wanting to go to Hollywood and make movies. I also asked my dad if we could build a prop shrinking machine like in the movie, which was met with bemusement at the time.

Below is a picture of what I've affectionately come to refer to as my "rough sketch", or "stink machine", as it is not so much a prop replica as it is a conglomeration of test pieces and spare parts I've had for years and been meaning to do something with. Instead of junking the hilariously inaccurate "flanges" I made 2 years ago, why not attempt some kind of facsimile as a starting point?

My reasons for doing this are mostly Covid-19 related. Without some kind of progress it doesn't make sense to take unnecessary risks, so getting together with my friend to build my final statement piece on this project can't begin yet.

Ergo, while I work on an new, more accurate 3D model of the real McCoy, please enjoy this assortment of piping and other debris, coagulated by yours truly into a vague representation of our favorite laser-based size reduction device:

The dry fit being completed and satisfying, the next steps would be to (1) seal the foam parts, (2) glue/screw everything together, (3) haphazardly apply random metallic spray paints, (4) festoon the whole thing with greeblies and lights, and (5) adorn the living room wall with it until my SO comes home from work and makes me throw it out. (edit: jk about that last bit...I think)

Also, please excuse the fact that my workspace looks a bit like a tomb.

Yeah, Disney + show showcased some of the restoration work of it.

2Cell said:
Yeah, Disney + show showcased some of the restoration work of it.
Click to expand...

Yeah! And it is in that current state one can observe the machine up close. Which reminds me, I wanted to redact a statement I made previously - having seen the new motor drive sprocket in person, I think the odd shape in Prop Culture was a trick of the light or something. It's a higher ratio than the original, but it's a legit sprocket and quite circular.
You must log in or register to reply here.
Share:
Facebook Twitter Reddit Pinterest Tumblr WhatsApp Email Link
Top