RPF PREMIUM MEMBER
Anyone have a small piece maybe 1 inch X 1 inch they could spare? I need it for a future project. Can trade laser time or cash for it, or a deal on a TARDIS kit just let me know.

Sorry to piggy back on your thread, Watson.

However, I would like to request the same thing after Watson hopefully gets the hookup.

If any one has a piece big enough that I could use to mold/cast and further cut down to use on my various SW model projects, I would greatly appreciate it! I will also pay. Please name your price.

Make that 3. The last thing I need for my ss X Wing. After Watson and Joe, of course.

Does Plastruct make something comparable to what you need?
Their listing is found here:
http://www.plastruct.com/picat/PLAIN_PATTRND_SHTS_9.pdf
Page 11 has 1/48 scale regular (not rough) clay brick sheet.
R/ Robert

No, Plastruct does not make anything exactly like the H&H sheet.

I have some and I can spare three 1.0" x 1.0" pieces. I know it's very hard to come by. But, I'm not sure how much it's worth. So, I'm inclined to just gift it to the three of you that have requested it so far. It's good Karma, right! Please PM me your addresses.

I have this if you want it

I would love to see a piece of this stuff. I would measure it and build it in 3d. You could then 3d print it. Would be great if you needed it in a different scale . If this stuff was Vac formed originally it would simple to reproduce. I don't know why someone hasn't done it already. Cheers,

You hit it on the head, Joe. It is even simpler if you have some of the original material, you can make a cast of it for vacuforming as much as you need. I only say this since the company is out of business and apparently the pattern was unique enough that 'close' isn't good enough.
Regards, Robert

If there is any left, I’d be very interested. Trying to finish up my 5ft Falcon Docking rings. Need 2 small pieces. If anyone has any to spare, please let me know. Willing to pay whatever!

I'd be interested as well if any one could help to finish these, will pay too thanks :thumbsup

RPF PREMIUM MEMBER
Those docking rings look great, nice to see more being built!.
I'm afraid I can't help with the H & R brick sheet, I only have a small piece kindly given to me to use on my Falcon. The sheet is like gold these days!.
Stu

Wish I'd seen this thread years ago. So I have a full sheet of the original red Holgate and Reynolds brick pattern I found in an old model train shop in St. Louis 20 years ago.
I'd be willing to donate a generous cut of it to someone who would cast it and offer it free to those in need of it. Postage paid of course. It's pretty thin plastic btw.

RPF PREMIUM MEMBER
Scott Janish, who goes by sjanish here, I think, did offer and cast up some for me. I had loaned him a sheet to do that a couple of years ago. Maybe contact him first ModelBuilder.

He gave me some castings, but none could quite get it as thin as the original sheets.


DARKSIDE72 said:
Wish I'd seen this thread years ago. So I have a full sheet of the original red Holgate and Reynolds brick pattern I found in an old model train shop in St. Louis 20 years ago.
I'd be willing to donate a generous cut of it to someone who would cast it and offer it free to those in need of it. Postage paid of course. It's pretty thin plastic btw.
Click to expand...

Scanned, printed? Yea I don't know. Like has already been mentioned it's very thin.

This stuff was supposed to be vacuum formed, so it should be easy to reproduce. Just put it face down with a wall around it, and make a plaster buck. You might have to enhance the detail a little, due to losing a generation. But should be simple otherwise. If I had a full sheet of the stuff, I would go into the plastic brick business, ; ) JK, how many people would actually want any of this stuff. I would, but I want everything used on SS models !

Suspend sheet vertically 2 inches above surface, build a box around, set thin threaded rods between sheet and walls for stability later. Pour silicone in but don't cover the entire sheet. This will form a sleeve mold. When set, slide sheet out. Pour resin in, bake in mold at about 110-120 for 30 minutes. Should set hard and retain original thickness and detail.

RPF PREMIUM MEMBER
This brings back memories. It was an interesting project and I learned a a lot.

Back when DaveG was doing his Y-wing run people were looking for the sheet. Scott Graham loaned me two pieces. 1 was red and about .01" the other was white and about .02". The brick detail on the white was much more crisp so that is the piece I worked with.

The original plan was to try and vac form it, but after looking at what Scott sent me I do not think it was vacuum formed. The detail (I use the word loosely) on the back was not the negative impression of tiny bricks. I think the brick details were stamped into heated plastic, but that is just a guess. I made a buck and tried to negatively form the pattern, but using a surge tank and my vac pump I could barely pull any detail beyond an impression of brick. There is a guy cavx that has done some very interesting things with female vac forming since then. Go read his stuff, very cool. I'd love to give it a try on his rig.

I ended up making a mold and pouring resin to make the brick. I used the white .02" sheet so my castings were .02" thick. Some of them came out thicker, long story and this is getting long already. If you wanted .01" brick you simply had to cut your chips and sand them down.
Last edited by a moderator: Nov 8, 2018 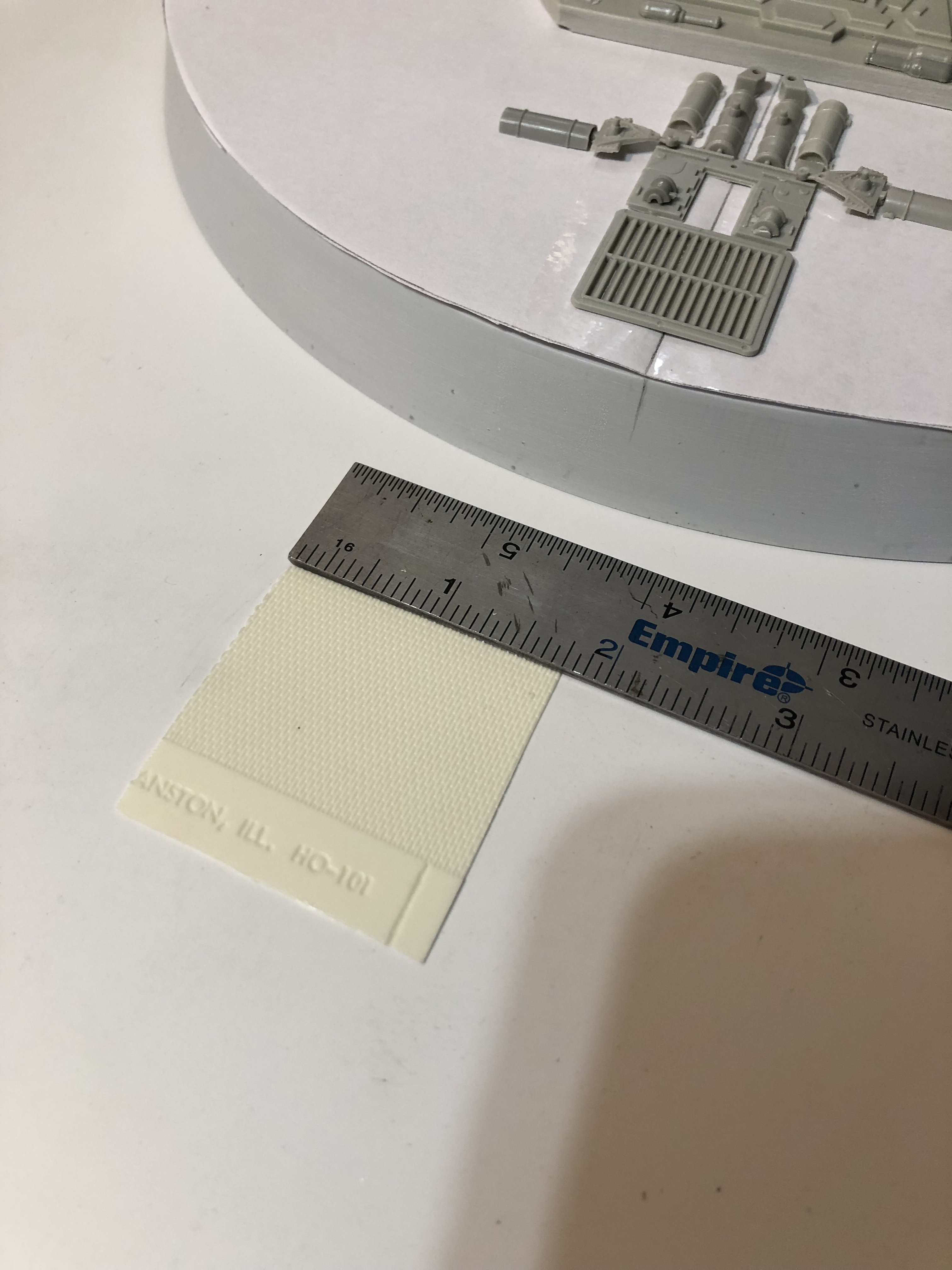 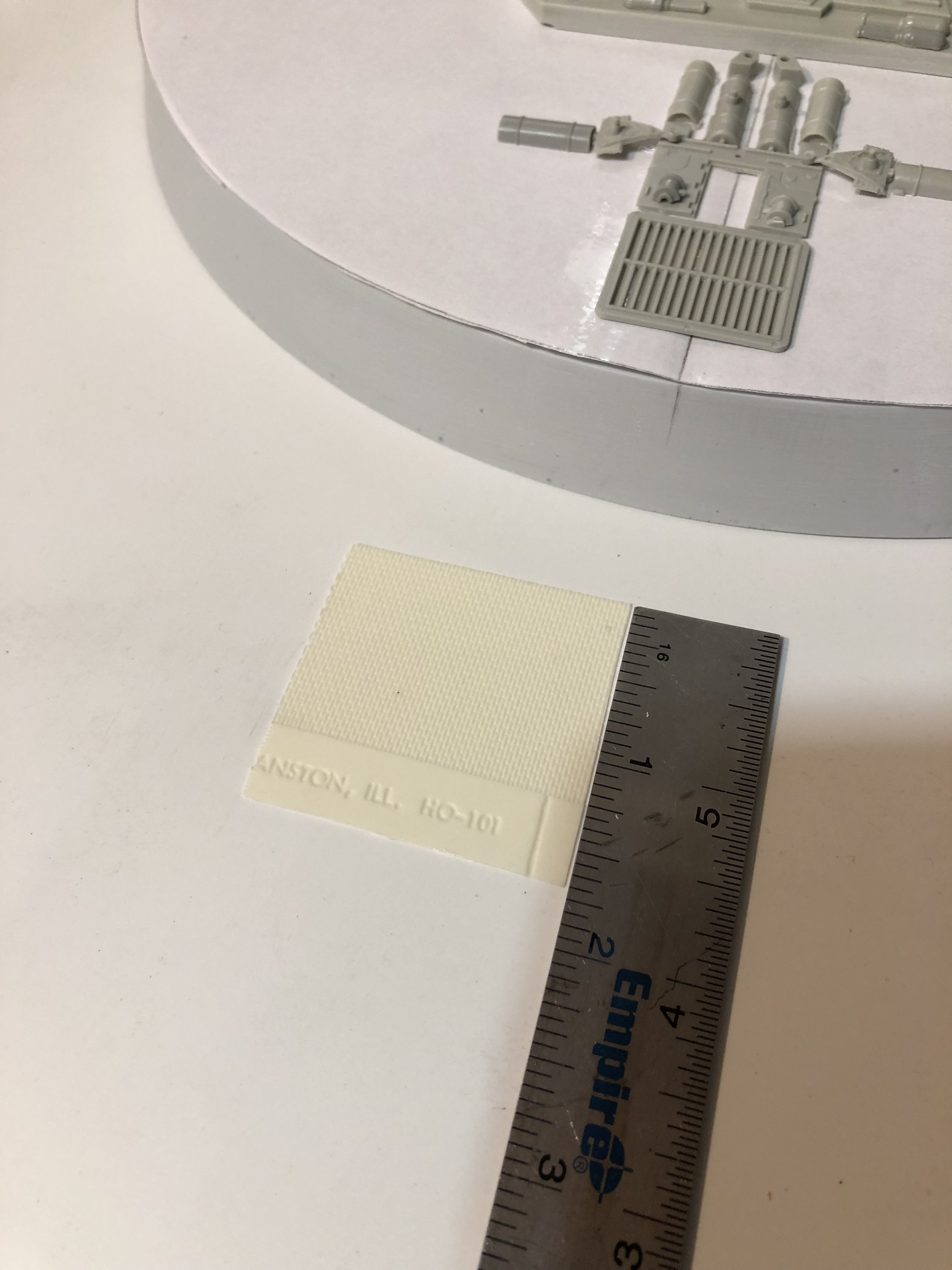 When I was hunting for this brick last year I came across a “Mom and Pop” Hobby Store not too far from me. I ask if they had any and sure enough...they did! ...BUT...they would not part with it, of course. He did offer me an interesting resin copy of it that looked absolutely amazing. I was lucky to get some real stuff for my Build and now comparing the 2....it’s dead on accurate. It is PAPER THIN, both sides indented, etc. The Piece even has the “HO-101” on it. He charged me $10 for it, which, I had to think a little about it, but considering the ending auction price I just saw on junk-bay for this stuff, it is a good alternative. I would have surely used it if I didn’t score a piece for my docking rings. Attaching some pics.....

And… another ANH 5FT falcon. My second attempt.