Anyone have an idea as to what the part marked with red oval might be? It looks like it could be some sort of ballpoint pen.. Anyone recognize the pen?

i watched this yesterday - when bond takes the poison out (glass vile bit from inside the glass hexagon, ....the part with the fluid looks to be about approx 2.5-3 inches tall in scale) so too big for ballpoints imo

RPF PREMIUM MEMBER
it has knurling at the bottom of it. Could be a nozzle like DS said.

It could be an airbrush nozzle.

robn1 beat me to it. Looks like a fluid cap from a badger 350, chopped off. If anything it's a close part.

I'm more inclined to believe they are cake decorating tips as already mentioned. I think airbrush tips would be too small. Possibly a torch tip, but i doubt it.

RPF PREMIUM MEMBER
Yeah, they look like cake tips to me as well.

It looks something like a auto marker punch top to me. The tool you use to make an indentation in metal before you drill a hole.

Tanks for the quick response guys. Yeah, I definitely will take a better look at the badger nozzle. So far it's the best candidate. Although I do not think the ballpoint tip is out of the question. If we say the glas vial is appr. 3in, then the tip would be appr. 7/8in. I measured a pen tip I had and it was 5/8in. I'm sure that if I find tips with the knurling at the bottom they will also be longer. I'm just thinking rational here. I mean if the pens exist it is not unlikely they used that solution. (think quantity, price)
Though the cake decoration nozzles look good, and are maybe close enough, they lack the knurling at the bottom plus they have a seam. I don't believe they were used. The part looks like it's in one piece and I'm almost certain that I've seen pen tips like that somewhere.

Below is a quick comparison of a screenshot and the pen tip I had. (the glove is just to match the scale better)

I was looking through the dump drawer in my kitchen I found this knife that reminded me of this thread. It's a helix retractable pen knife. It's got the knurling and looks to have the correct size hole in the end. 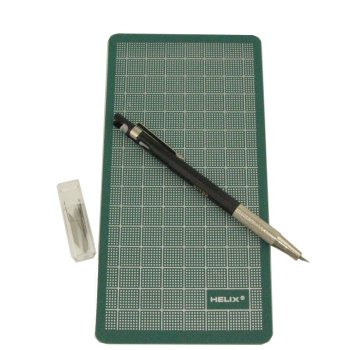 and a close up I took.

The retractable pen knife reminds me of a 2.0mm lead holder for drafting. The knurling on mine is too fine to be accurate for the prop though.

valdi said:
...I definitely will take a better look at the badger nozzle...if the pens exist it is not unlikely they used that solution. (think quantity, price)...
Click to expand...

There are other airbrush brands that have similar nozzles, the Binks Wren and Paasche H were both available at the time. And the nozzles are sold separately as replacement parts, no need to buy a whole gun.

This is all good stuff