RPF PREMIUM MEMBER
Hey all, I know I don't post here enough, and it's largely because making content for tested.com is all-encompassing. But I'm in a great mood today and thought I should show what I built this week.

Context:
I've been hand-machining Hellboy's Samaritan from scratch (see here ) and it's already four videos (and 140 hours of my labor so far) and a few more steps and videos coming. 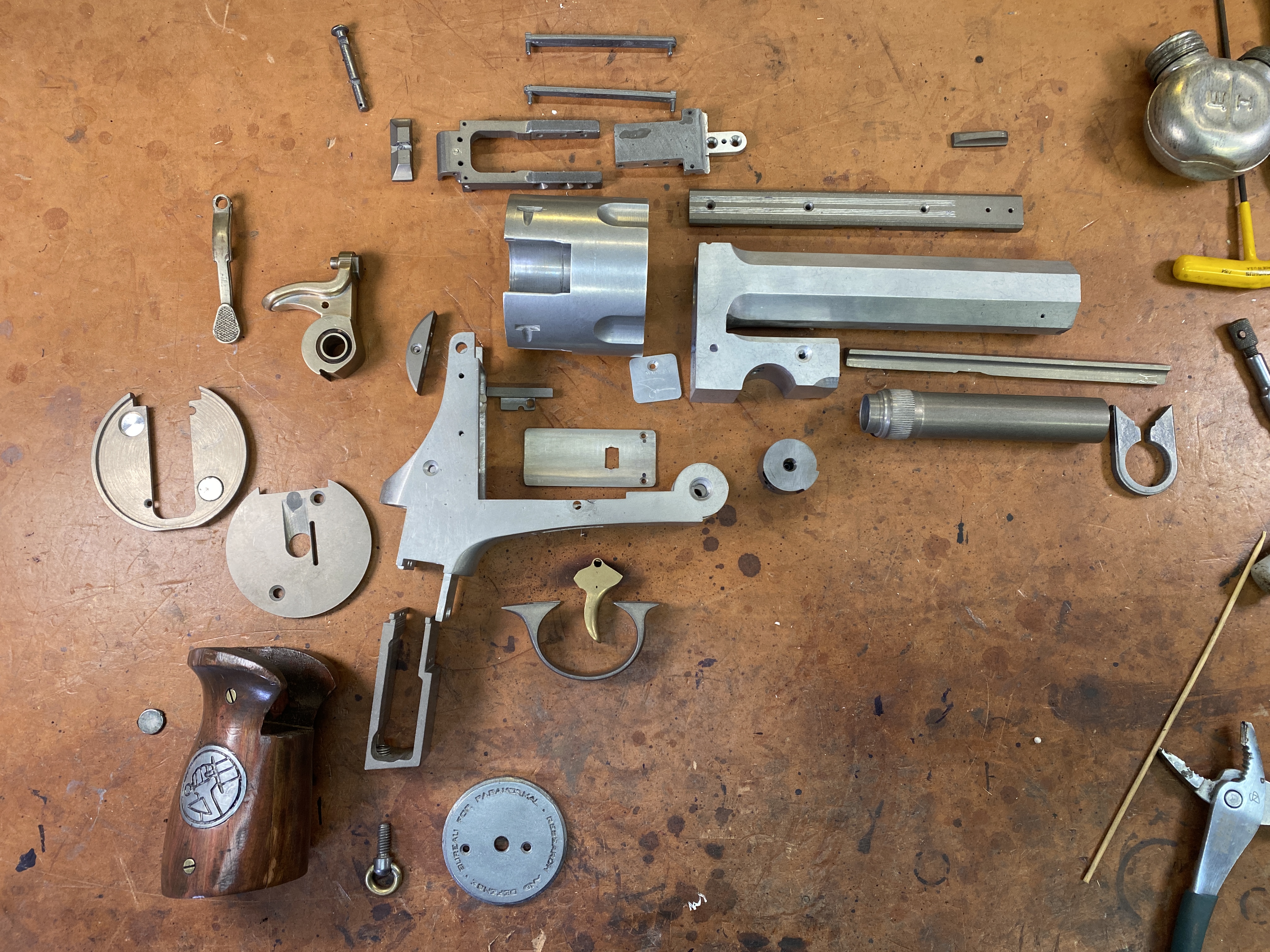 Building something like this means taking it apart constantly. I love the shots of it all separated. 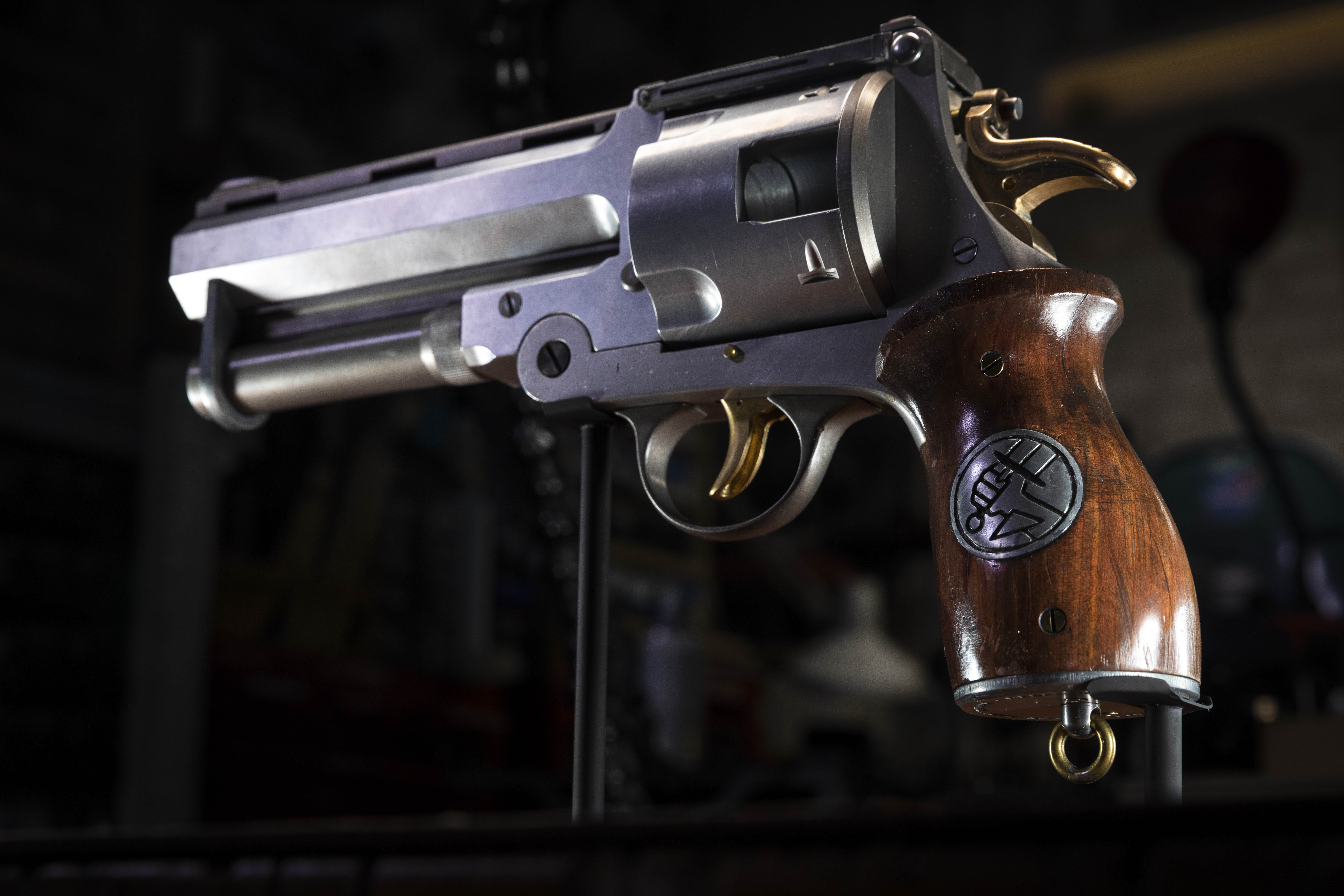 One of Norm Chan's beautiful photos.

So the gun needs transport right? I needed a case. There's one in the film, and it's definitely got an "Army" kinda feel. Several people have made versions here on the RPF and I looked at all the threads.

A couple years ago i won an ebay auction on a metal box that was very close (perhaps a bit large) to the correct dimensions of the Samaritan case from Hellboy. I've never gotten around to painting it, but finally did a couple weeks ago. Here's the result: 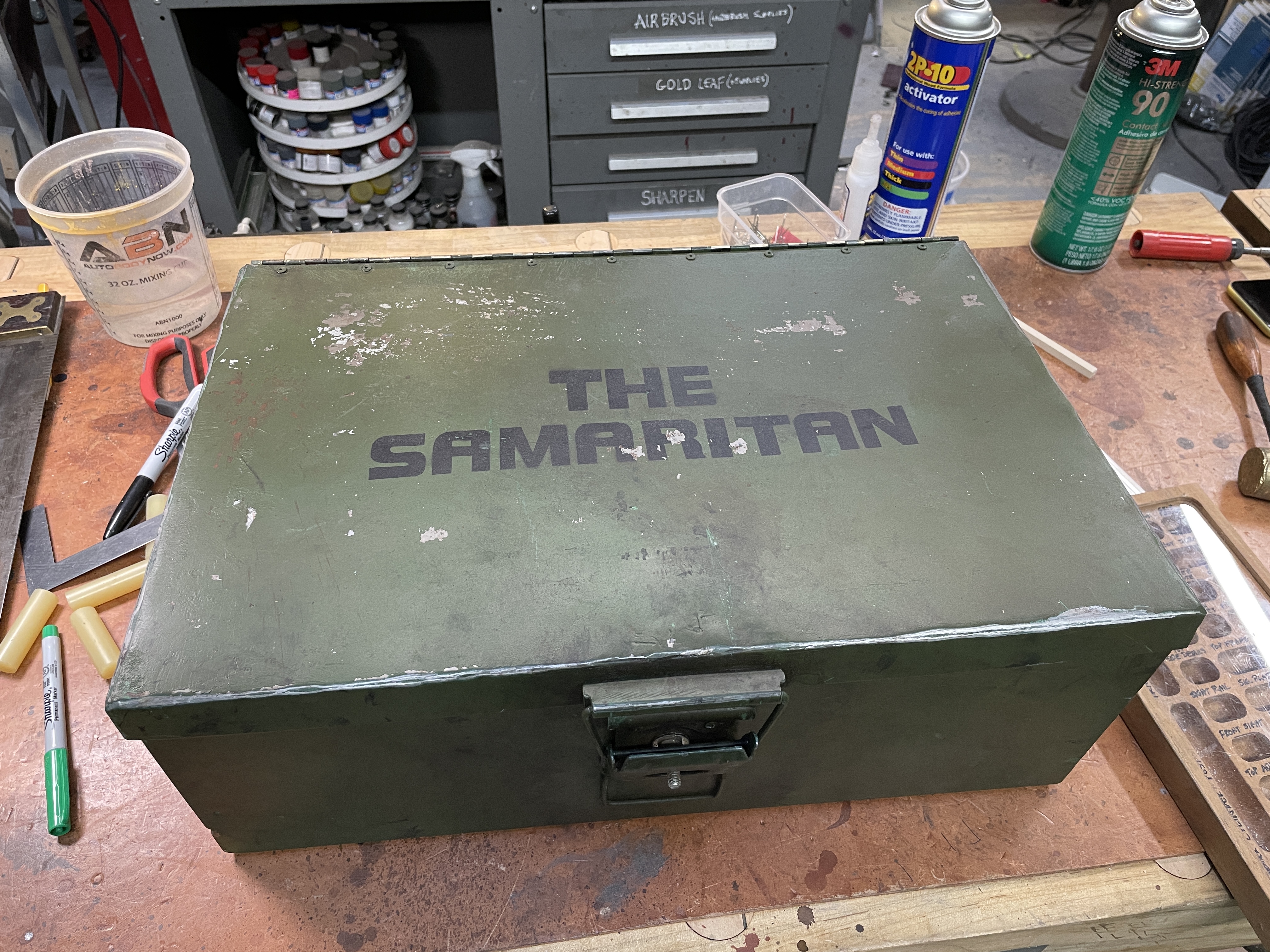 IN addition to the paint I added the clasp from an ammo box for the front closure (thanks to someone's research on the RPF) and also added a brass piano hinge across the back of the lid. I painted the interior black and added a bunch of dirt and rust.


I was really happy with this. BTW the olive drab color base was a Tamiya rattle can. I didn't overly prep the surface, so after my paint was dry I used masking tape randomly placed on the box and peeled off some spots of paint. It worked great! Then I clearcoated in a matte lacquer. I'd share my Samaritan lettering art, but I hand cut this from paper using some very rough reference material. I'll see if my stencil is scan-able.
Aaaanyway, I was super happy with how this turned out, but I had one issue: I have never loved the interior of this case as we see it in the film. 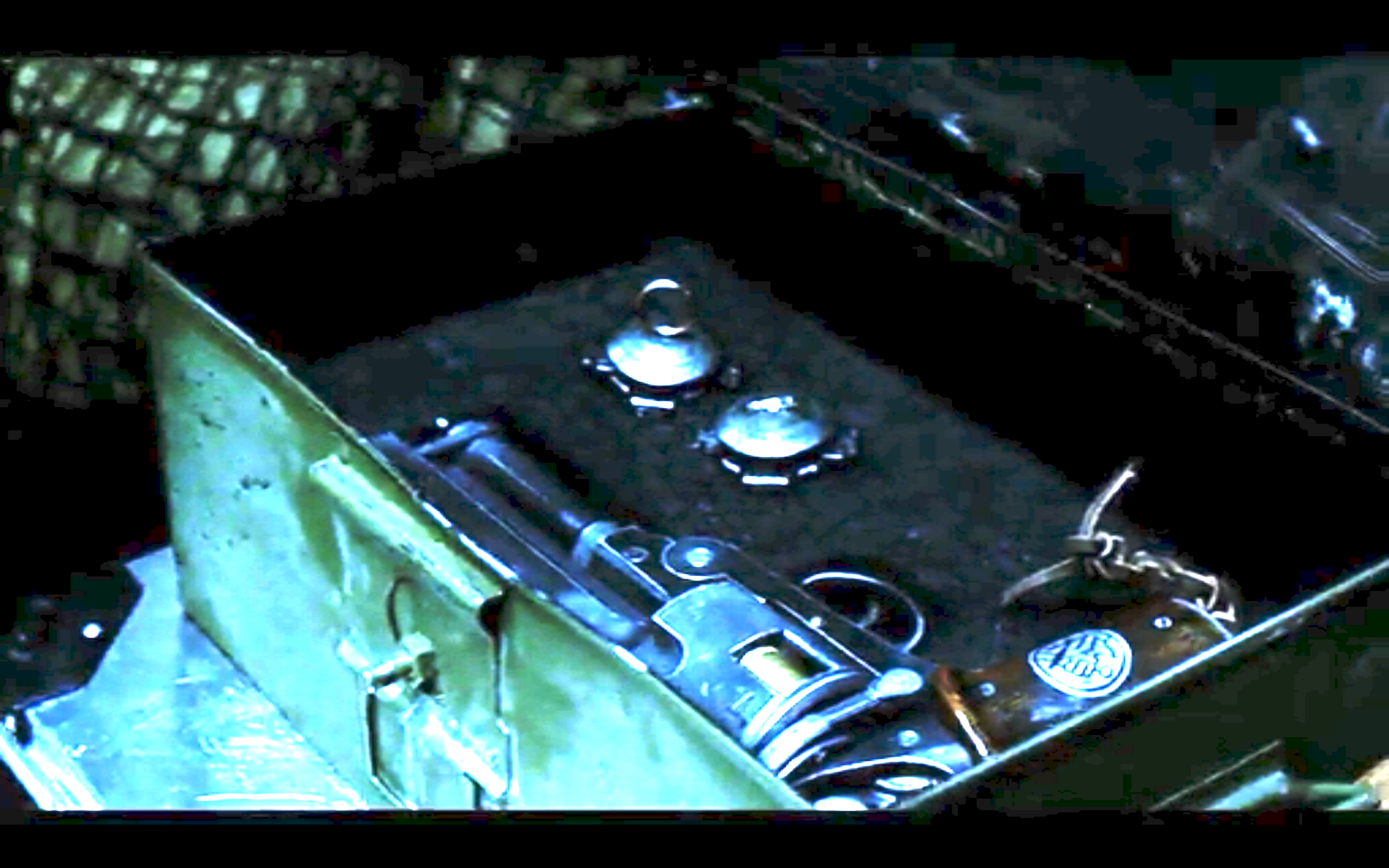 It's just a little...anemic for my tastes. So I considered a redesign of the interior. I researched some old pistol presentation cases and got inspired. Using 1/4" plywood and my 23ga pin nailer and some glue and felt, over two days I completed a non-canon interior that I'm really happy with. It feels authentic, and it's actually filled with all the tools I need for assembly, disassembly, and maintenance. Funnily enough, it took a lot of weathering to get the aging I did to show up on camera. I airbrushed burnt umber liberally in the corners and all over and you couldn't see a LICK of it on camera. I eventually did a distant all-over spray with black primer just to kill the vibrance of the green.
This build will go up in a couple weeks or so but I wanted to share it with y'all, as I come here daily to get inspired and for research. I've gotten a lot from the RPF over the 20+ years I've been participating.

Without further ado, here's my hellboy pistola in it's new habitat. 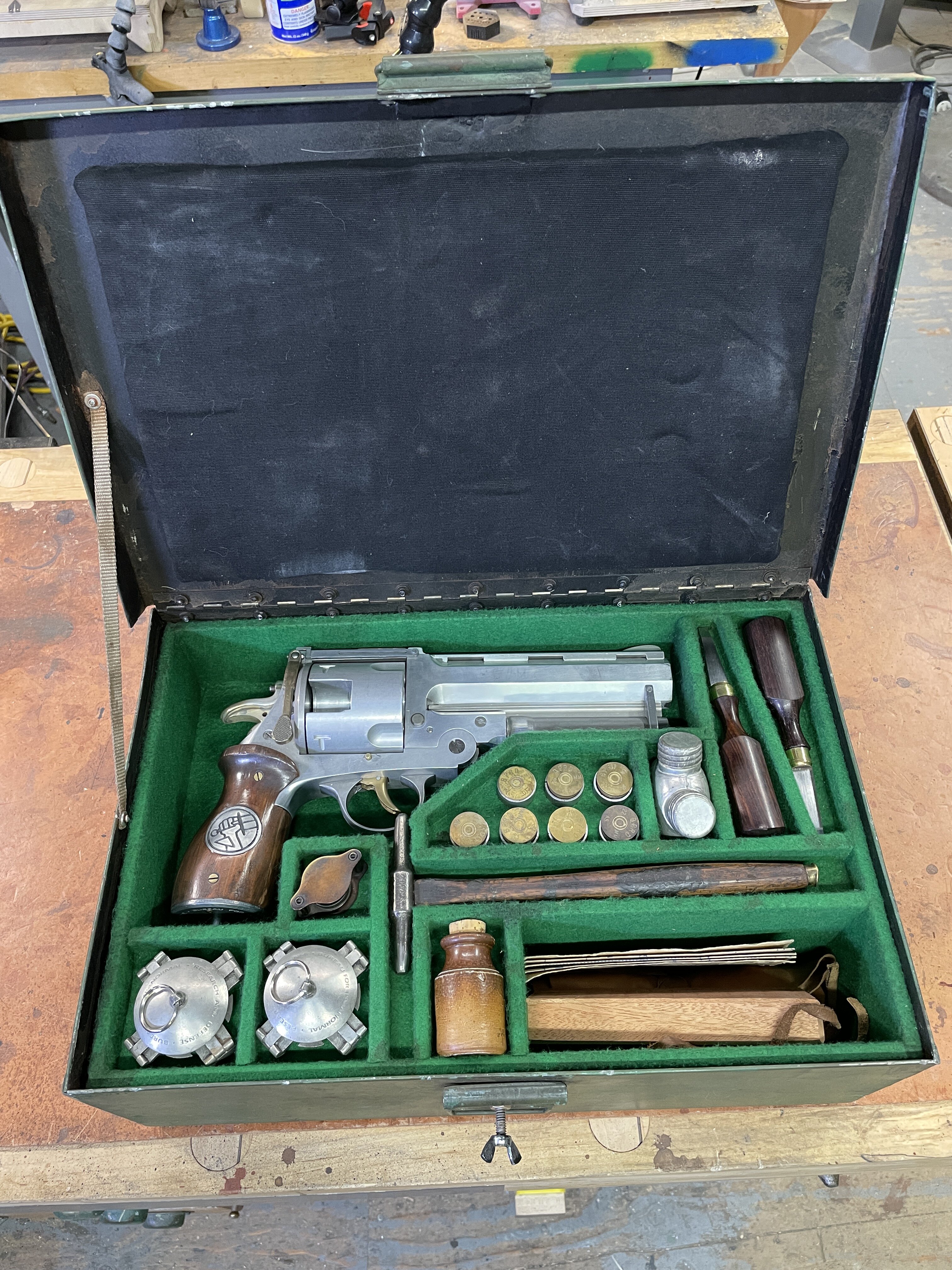 The brown ceramic bottle in center bottom is a salt-cured inkwell. These were common during the civil war and several of them are visible in Broom's Box, which I own one of. They're not hard to find for a few dollars on ebay. So I liked the idea of putting one here full of some lithium grease. The speed loaders are static props from a run here on the RPF, I may end up re-making the mechanics of these, we'll see.
Next steps are to rifle the barrel, and then to chemically blacken the aluminum. Once I've done that, I think it'll be finished. Just a HUGE amount of work.

RPF PREMIUM MEMBER
I learned a lot about actual gunsmithing on this build, including that there are special screwdrivers for the practice! They are visible upper right in the case and their hollow-ground tips put the screw-turning pressure at the base of a flat head screw channel, instead on the corners, like regular screwdrivers!

I've been watching the build vids. Love this build of the Samaritan and was looking forward to seeing the case build. Can't wait to see the build video for it.

Your box & case builds are my favourite ones to watch.

RPF PREMIUM MEMBER
I I keep meaning to have a gallery showing of my cases for my fave props. I've got a weird collective of them: everythng from a display box for my incredible Tom Spina Chewbacca mask to my bride sword.
The case becomes a super-obsession.

asavage said:
I I keep meaning to have a gallery showing of my cases for my fave props. I've got a weird collective of them: everythng from a display box for my incredible Tom Spina Chewbacca mask to my bride sword.
The case becomes a super-obsession.
Click to expand...

Last summer I bought an empty microscope case, you know the wooden ones with the slots for all the doodads and a lockable lid. I blame you Adam. Lol
Great job on the case. As per usual you’ve evoked a thing, while making a completely new and wonderful thing.
Last edited: Nov 7, 2020

I cannot WAIT for the build video for that case!

RPF PREMIUM MEMBER
I love the esthetic of this case. It reminds me of the 19th century pistol cases, seen around the time of the American Civil War, complete with the accessory pieces seen in the individual compartments (example, below). 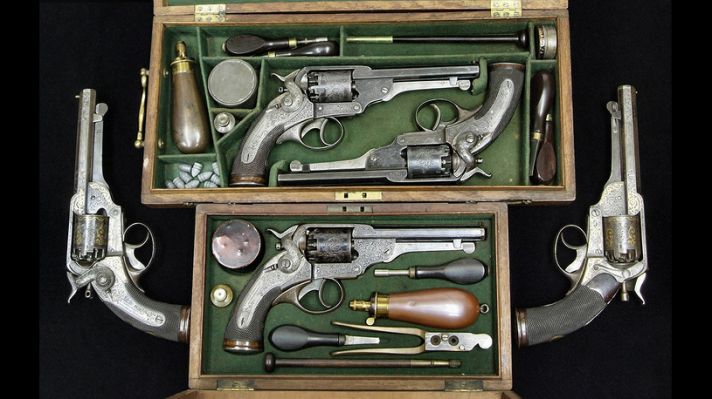 RPF PREMIUM MEMBER
Yeah, I found tons of stuff just like that. After looking at a few I felt total license to try my own design. Most display bullets in multiples of the gun's capacity, but I went with 7 rounds because he's Hellboy, and superstitions are real to him. Beautiful case above.

I've been following the build videos as well. Absolutely stunning work on this thing. It really is beautiful and the kind of build that you aspire to.

I love the details and ephemera of these case builds. I believe that's an old Russian oil bottle I see? What kind of accompanying paper work is in there? Bible? Instruction manual?

Could you explain more about the screwdriver tips please ? Sounds very interesting ...something I never knew .

Really beautiful build! The gun is just a work of art.
I love the case and look forward to the build video. How much does the fully loaded case weigh?

RPF PREMIUM MEMBER
I love this! Hellboy and the Samaritan hold a special place in my heart. Looking forward to future vids.

Been avidly following the videos on YouTube. I tried to get a few screenshots of your note book for dimensions, any chance you could post some pics of your notes and measurements here asavage ?

RPF PREMIUM MEMBER
I'll find a couple pages and post them but it's all super all-over-the-place. I had castings of the real thing to work off of, but i'm here to tell you what you'll find on those pages is like 15% of the measurements. The sideshow replicas (I have both) are highly accurate dimensionally. 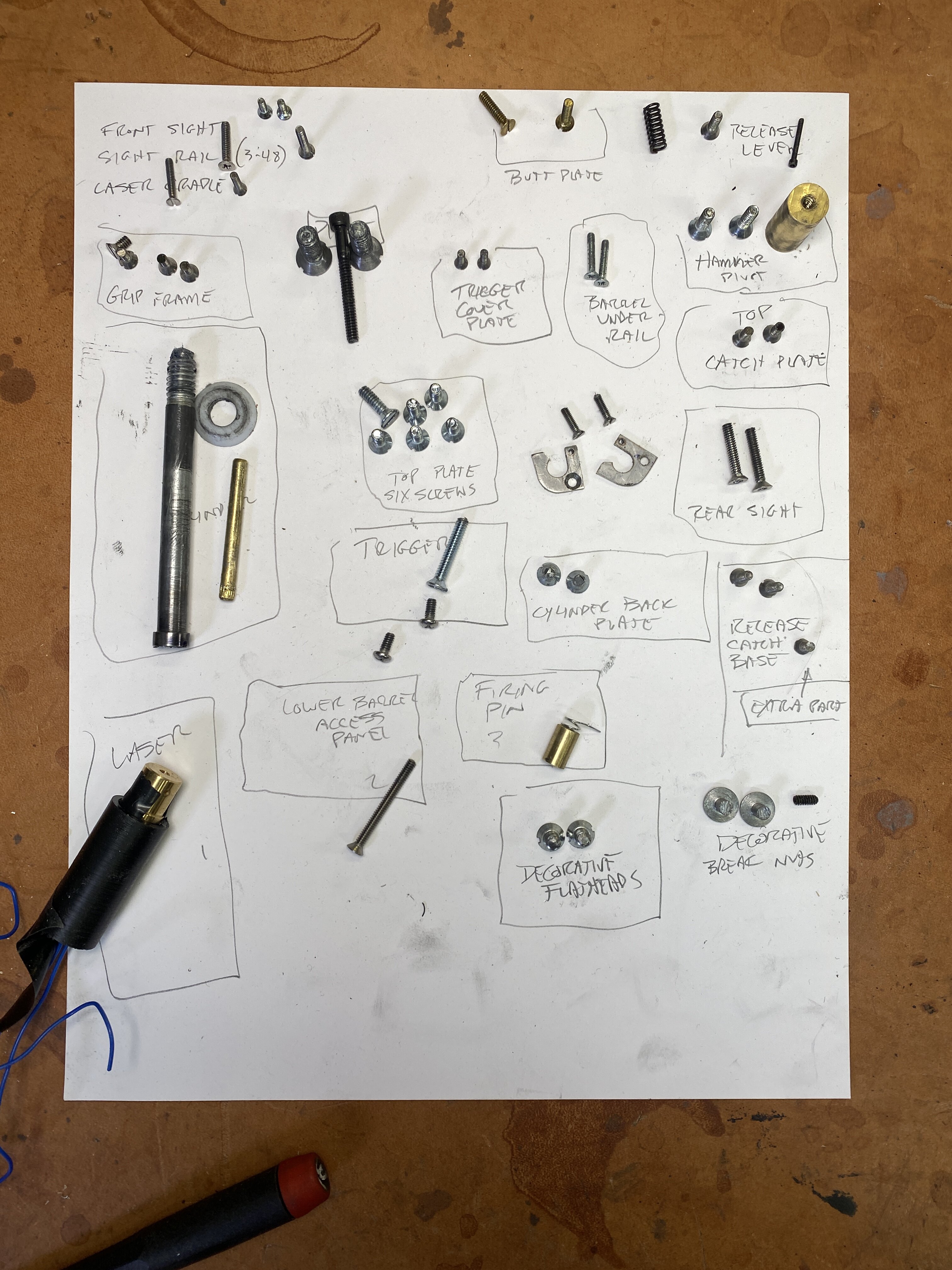 Here's about 65% of all the hardware. Just keeping track of this stuff can be a bear, especially since every screw etc has been modified, so if I drop any I have to re-make them. I'll grab my sketchbook later today and take a couple pix. Shoutout to using a leather pad on one's workbench for stuff like this. I got the idea from Clock Making and Home Machining (the greatest youtube channel) and it's been somewhat life altering. Plus the surface becomes an incredible document and witness to the projects on the bench, all while protecting it!

The whole case weighs about 14lbs methinks. Also re: the gunsmith screwdrivers, here's a diagram of how they work: 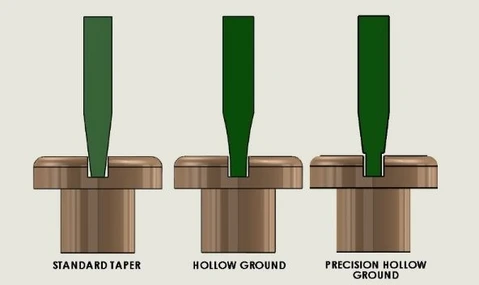 I've learned that true gunsmiths have many many of these so they can always find one that's ideal for every screw. I have three.
A

RPF PREMIUM MEMBER
Thanks for posting. I love the case. I've been glued to the Samaritan build videos as they come out. So much so that the other day after I'd had a particularly tough time working with a patient, my wife--to cheer me up--asked "Do you want to watch Adam Sandwich work on his Looney Toons gun..?"

RPF PREMIUM MEMBER
Here ya go! I cannot vouch for any specific measurements. Double check all my math. Have fun! ( I tried to scrub any sensitive info, but if you find the ghost of a phone number in these scans, be cool and don't call it)
Also these drawings include my fix for the fact that my main body is made from huge chunk of aluminum that was 1/4" too short and I had to scab on a small piece to build the bridge over the top of the cylinder. 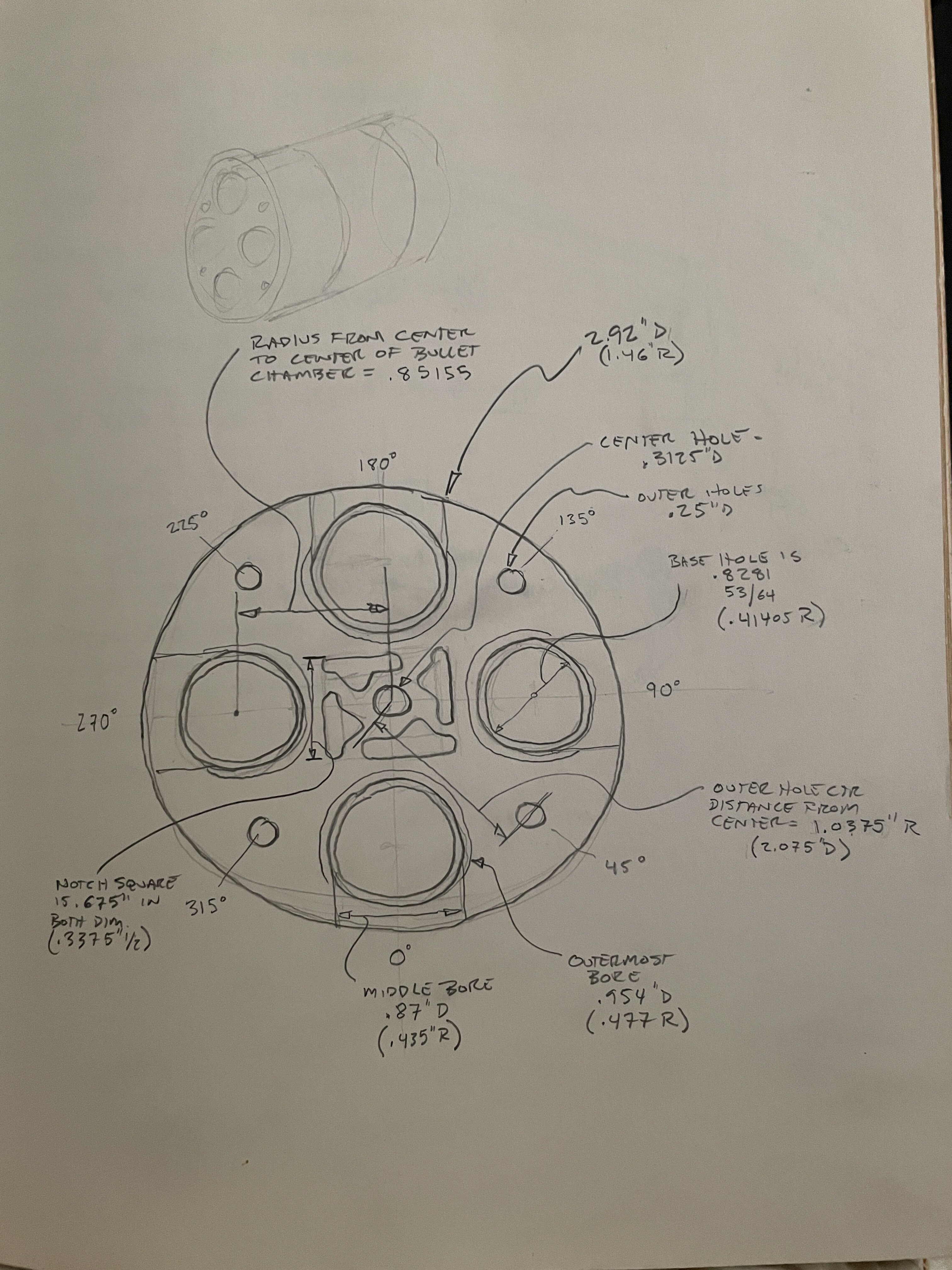 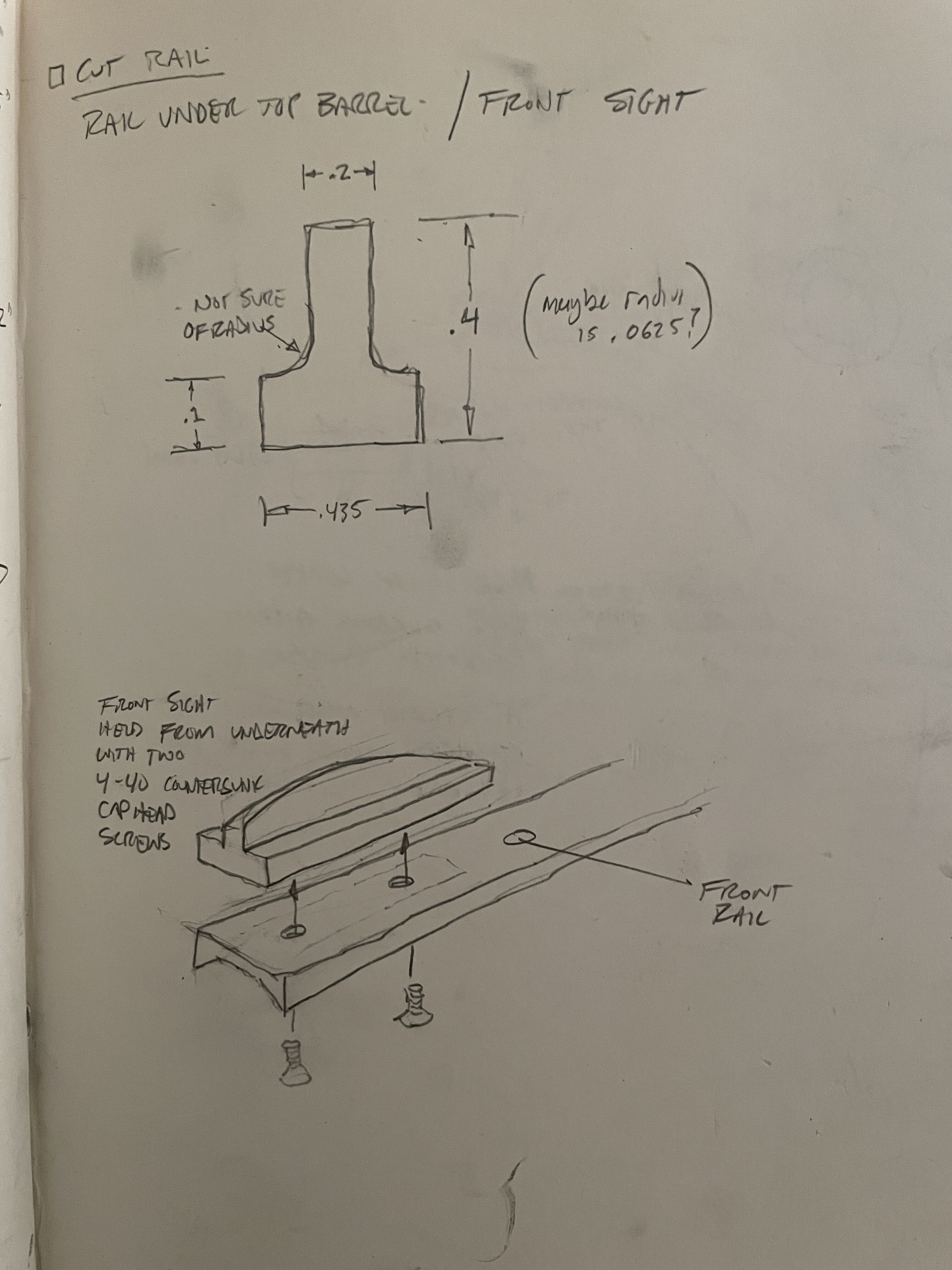 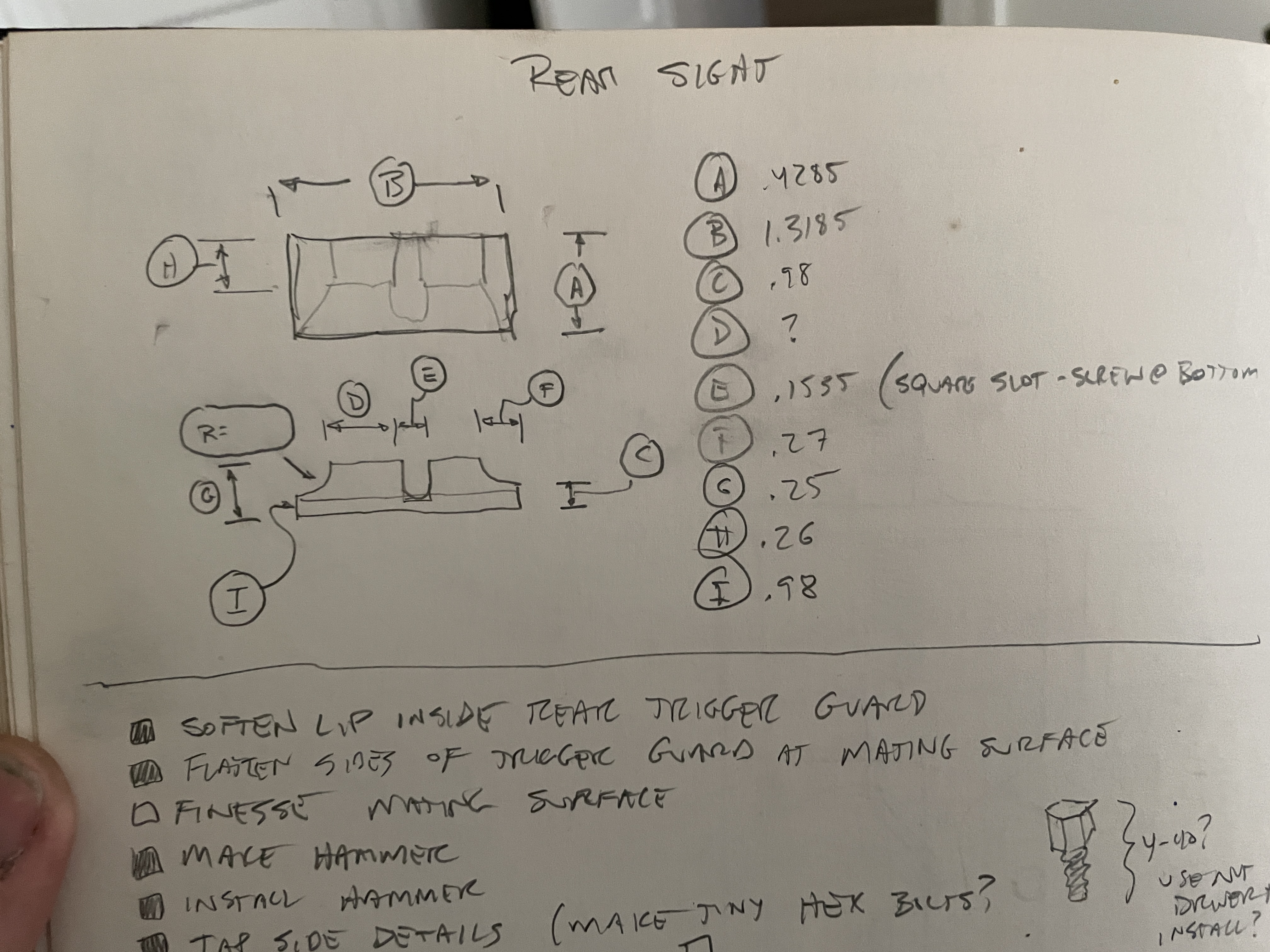 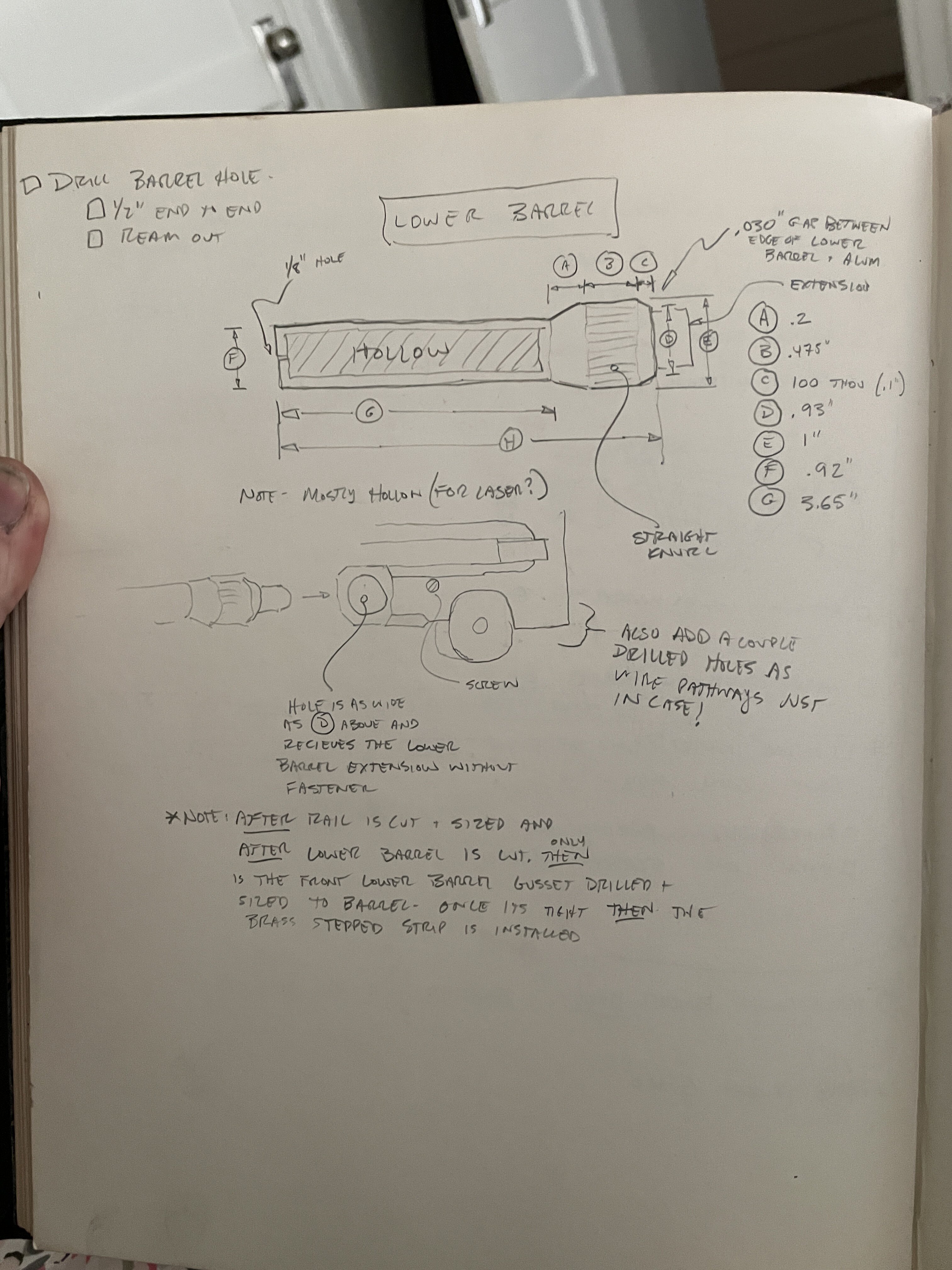 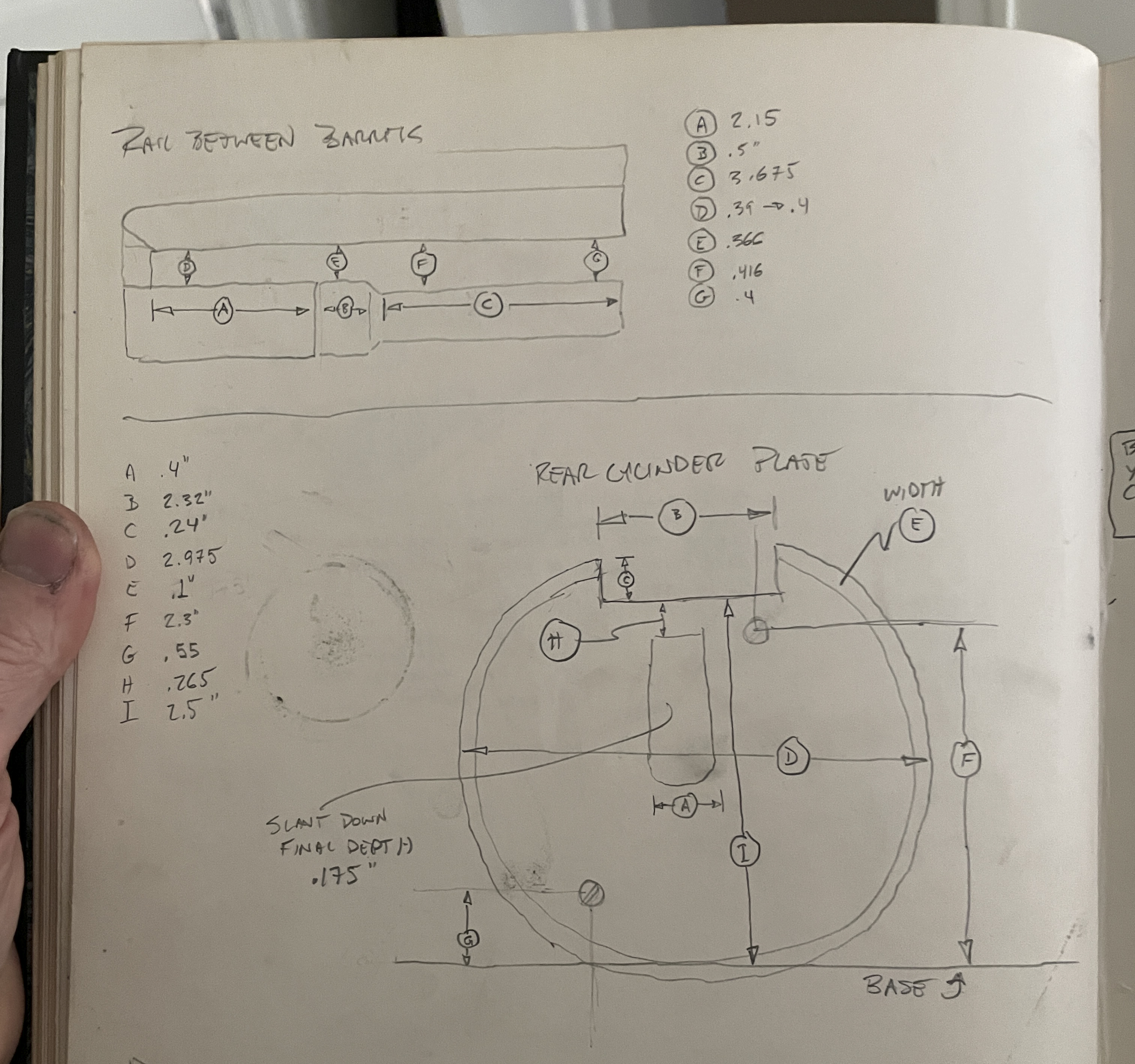 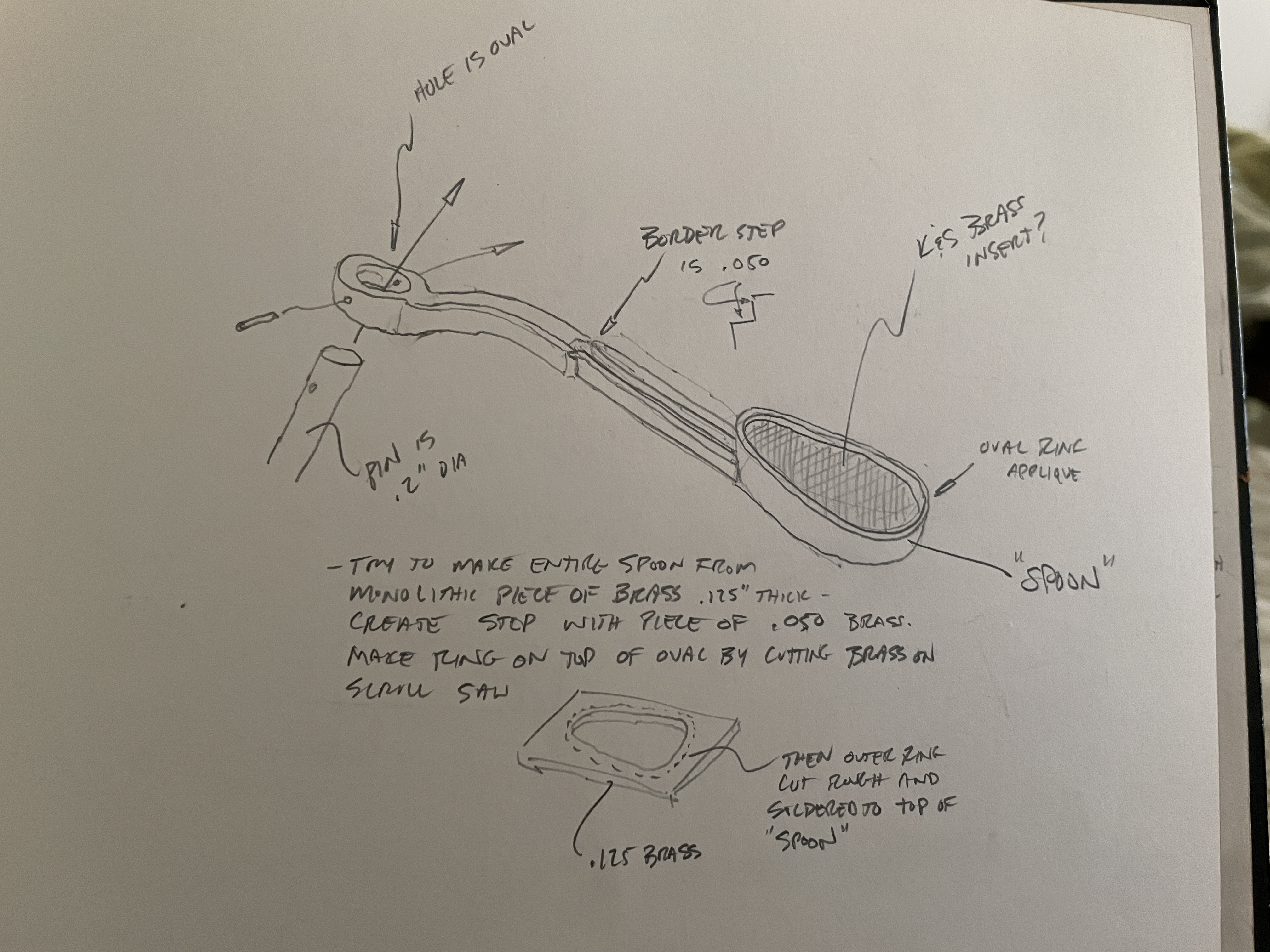 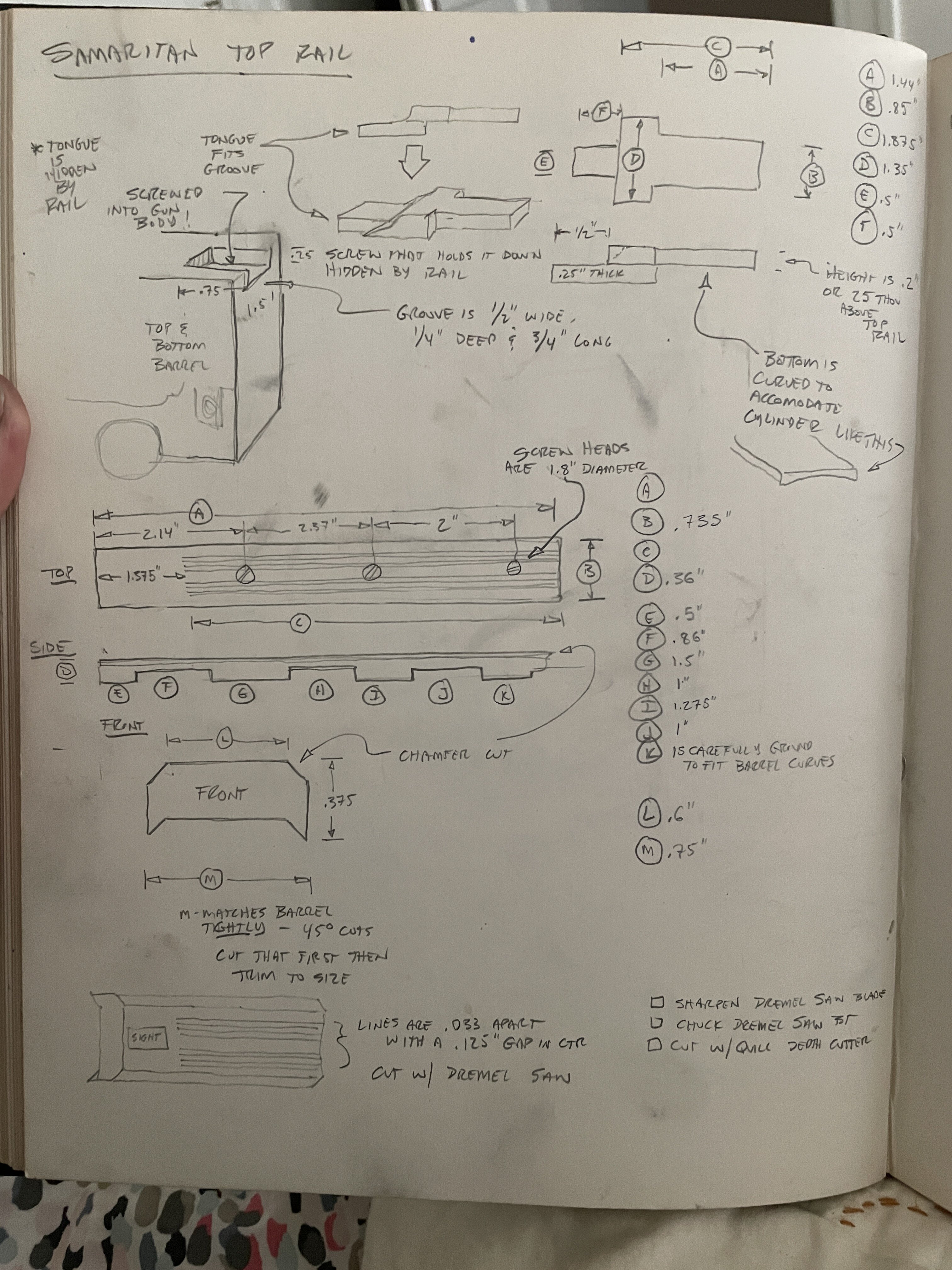 Awesome notes there! These combined with the normal working out measurements we do from pics will do me fine!
I have been working on a 3D model for the Samaritan for about 3yrs trying to make it fully functioning. This might be what I needed to finally get it done!

RPF PREMIUM MEMBER
So awesome, Adam!!! Thanks for sharing this with us!

I have kit of The Samaritan that I need to build, and while it won’t be as epic as yours, this information is all really helpful!

Back To The Future Plutonium Case.