RPF PREMIUM MEMBER
Hi there,
I wanted a bit of a nice change of pace from my Star Wars projects, the blaster is quite complicated to handle ;-) and I was in a bit of an Hellboy mood at the moment, I got quite excited by Tip Top workshop's Samaritan kit when he made it a few weeks back and it was one of my only pleasure expenses this year, that plus the bullets from last Propstore auction and the seriously amazing metal build from Adam Savage, really got me into a nice Hellboy phase.
When I received the Samaritan kit, I started updating it with some metal parts, the most obvious move from there was to do some metal bullets for added realism and a nice bit of extra weight!

so, there we go! I started with the bullet cases and bought 25mm round brass stock that I cut into pieces of approximativelly 7cm to do two bullet cases back to back. I chose to go this way to put them in the metal lathe chuck as it would be difficult to go at it another way because of the lip at the bottom of the casing.
well, here it already shows my finished prototypes, but this was the beginning of the actual run of casings: 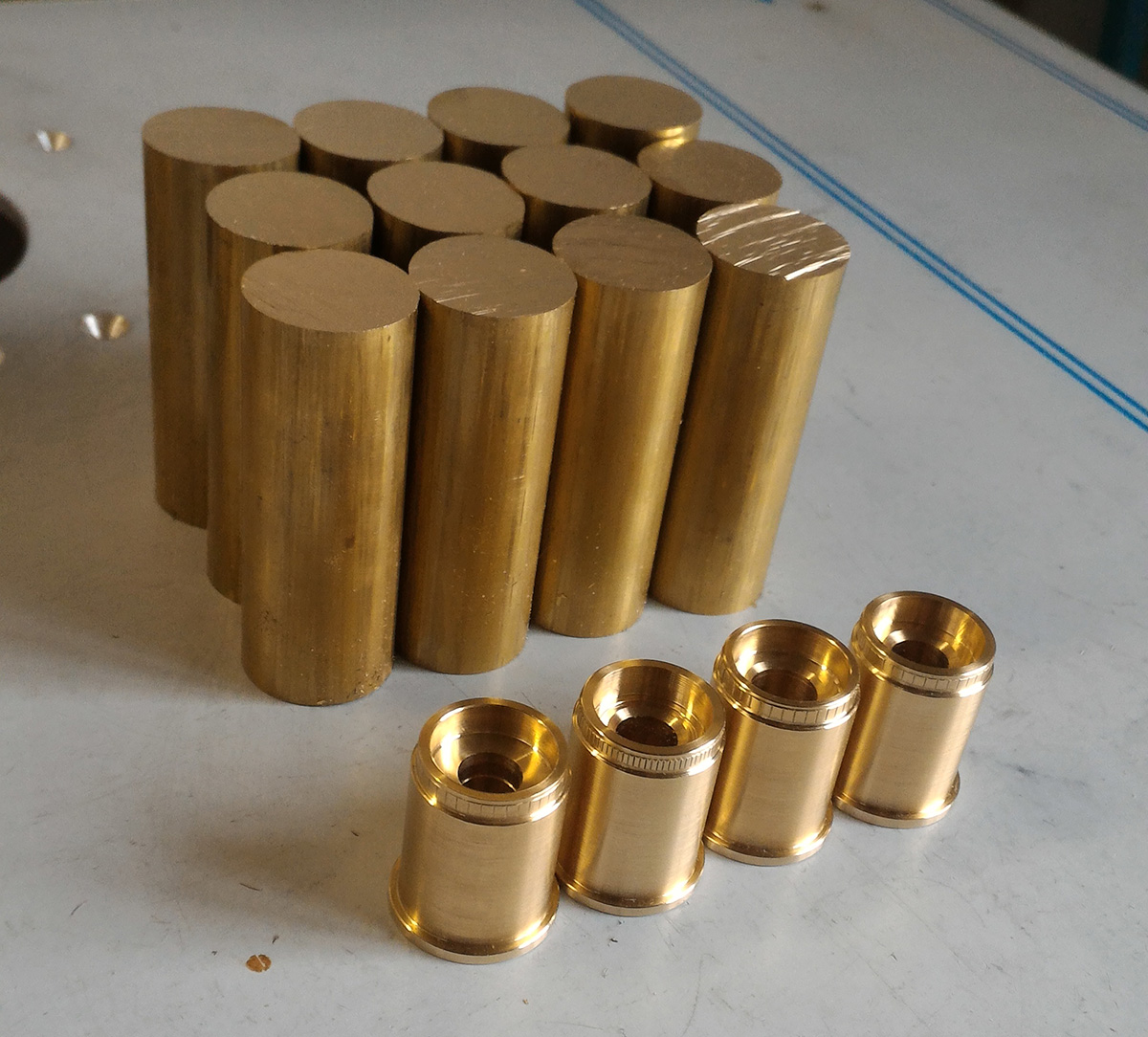 after this first step, I chucked the pieces and turned both faces clean, then started turning down each side to 22mm, the actual diameter of the future bullets: 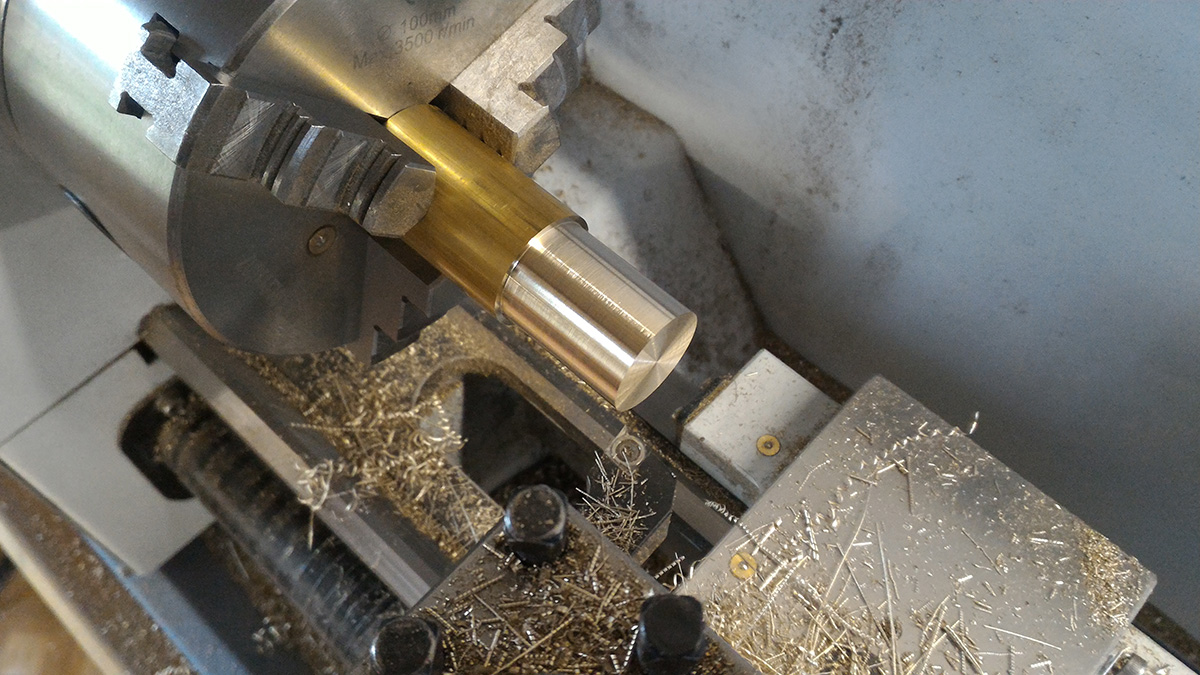 when this done, I turned down a bit more the top of the casing and did the knurling simulating the pressing marks on the casing when the bullet is fited. 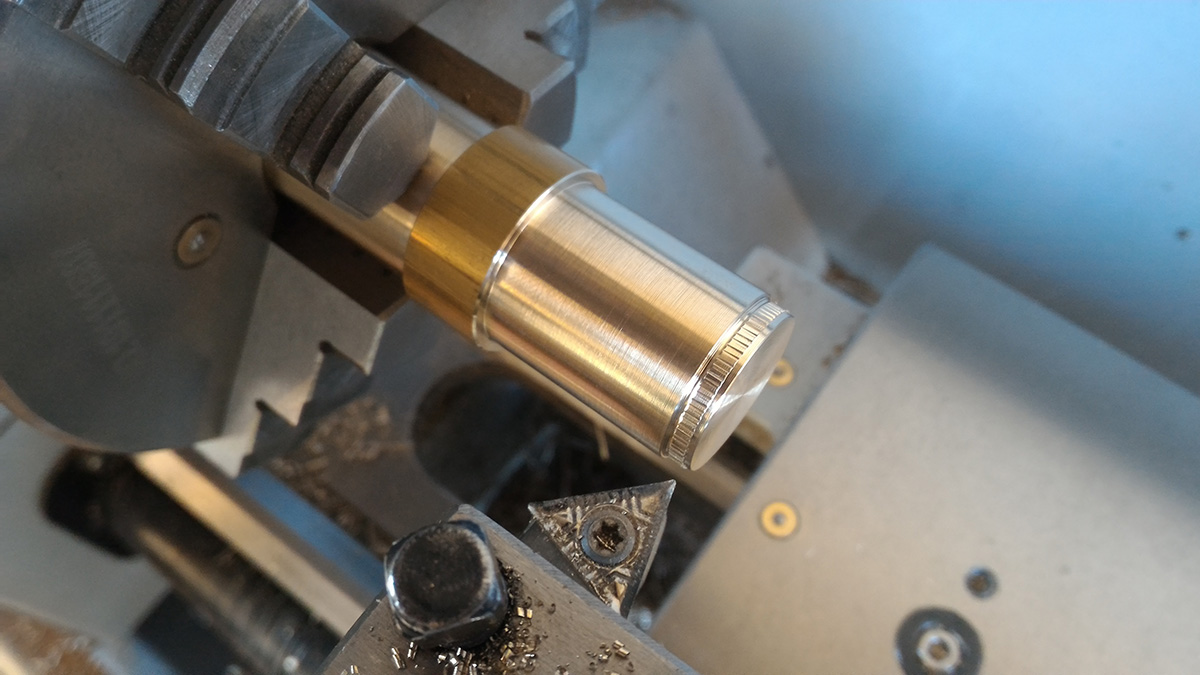 still with both casings attached back to back, I started removing the material inside, for that, I start by drilling from 6mm to 13mm in diameter and 25mm in depth: 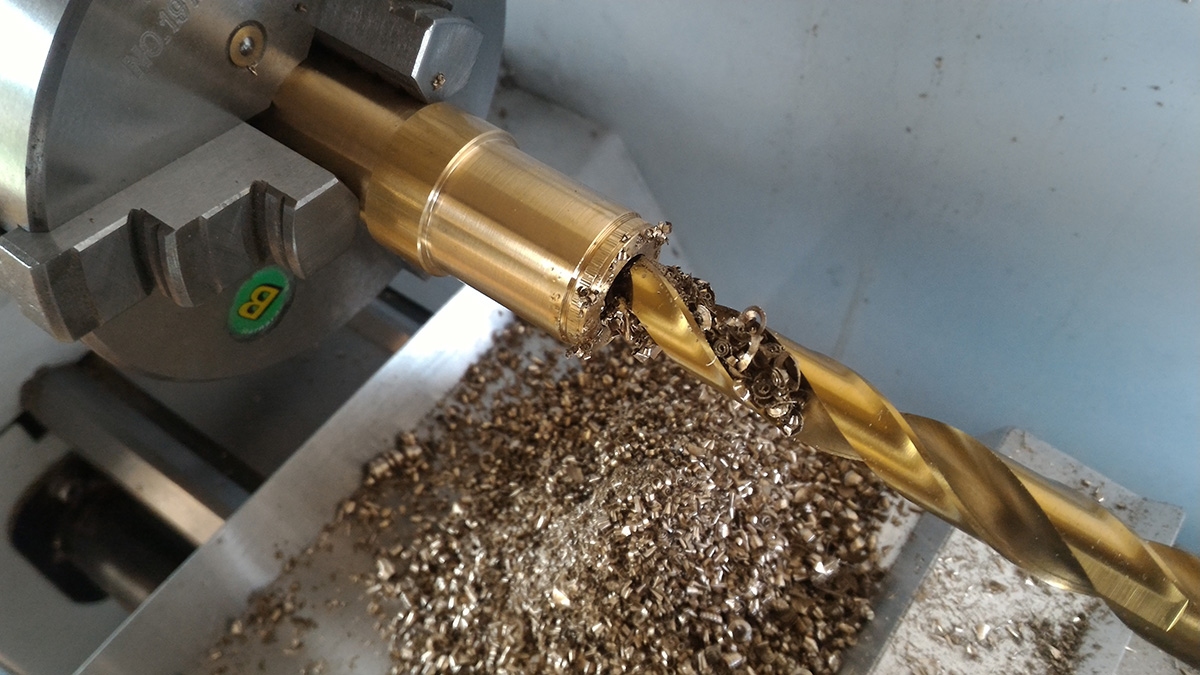 then comes a step where I remove the rest of the material with an inside turning tool tenth of a mm at a time... I have no photo of that step, just the result after this is done on all of them: 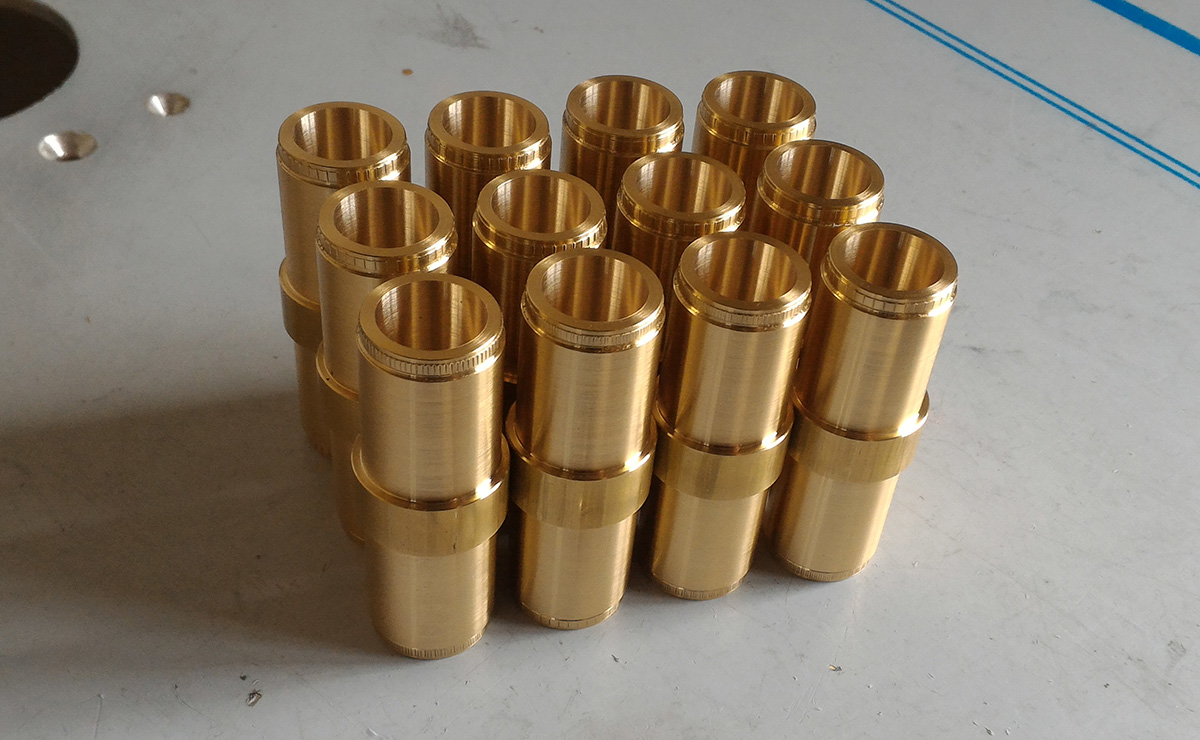 ok, now we are ready to separate the casings in two, I did a few on the lathe but it was easier to do it with the part stuck in a vice and cut with the circular saw in the end: 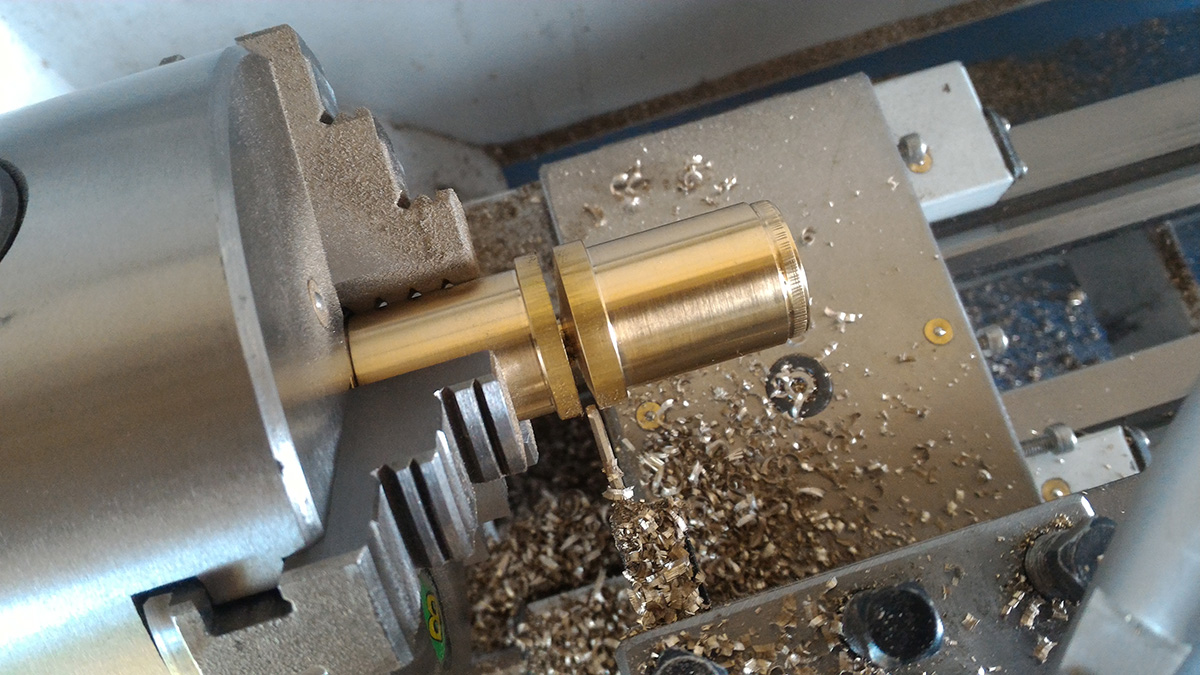 after that you get a bunch of casings with a rough cut back: 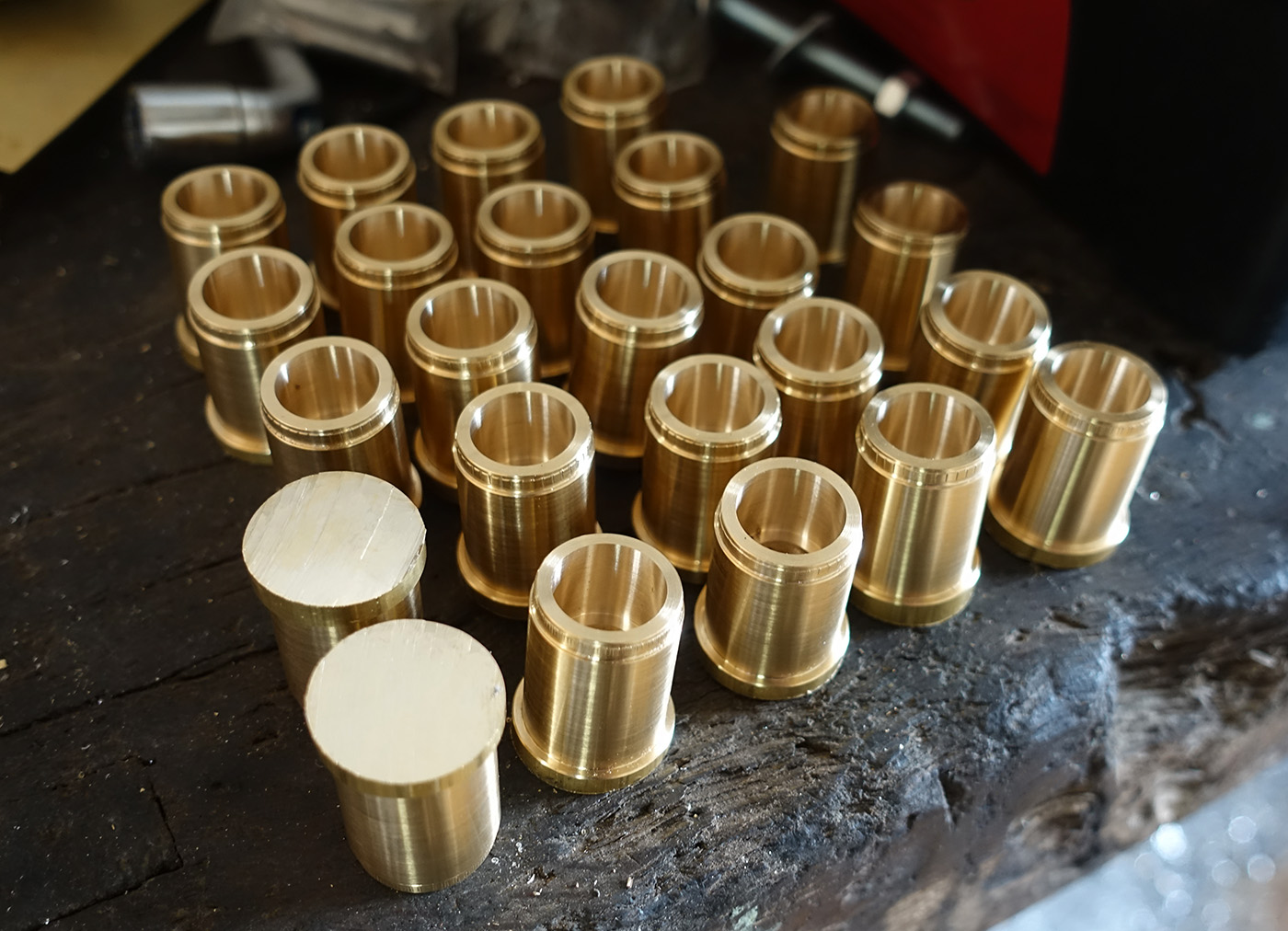 and I can now turn the faces clean on the lathe again: 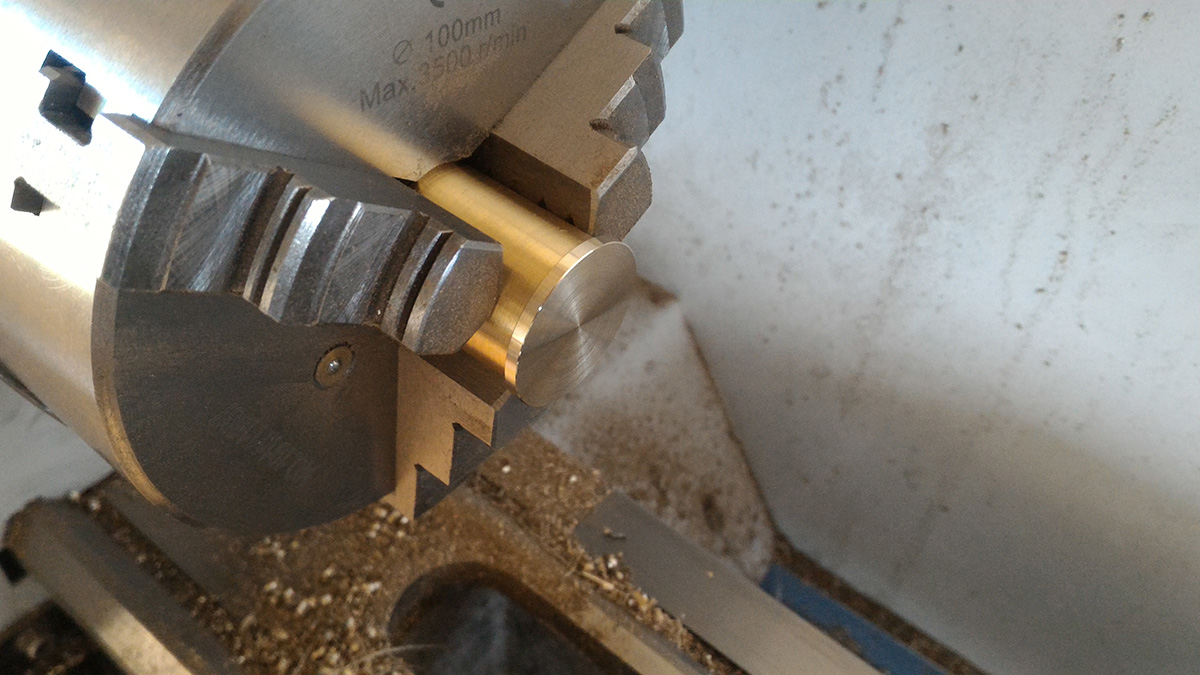 ok, so this is the first big step completed! of course this was a matter of several days, it might seem fast presented like that but there was quite a few casings to do and in most cases each step took a whole day...

RPF PREMIUM MEMBER
Ok, next step was to do the markings on the back of the casings!
well, that wasn't easy!!
first I asked my wife wonderknight if she could acid etch them but after several tries and the means we had on hand, it didn't really work, the letters are really small, we tried with uv resist film but it was really hard to get a clean result, so after a while, I moved to stamping the text instead, it's a much longer process but the result would be much more realistic in the end!
so, I did a few tests with stamping letters, then looked into buying the proper size for each piece of text and eventually ordered a laser cut steel stamp with all the design in one piece on it.
It took two tries as there was a little size misunderstanding for the first one, but the second one came out perfectly!

so here we go, in my father's in law "workshop", to use his old anvil,
after a few tries, I made a small jig to old the casings nicelly and so that only the inside took the hit of the hammer and not the border of the opening of the bullet, I got a much nicer result like that: 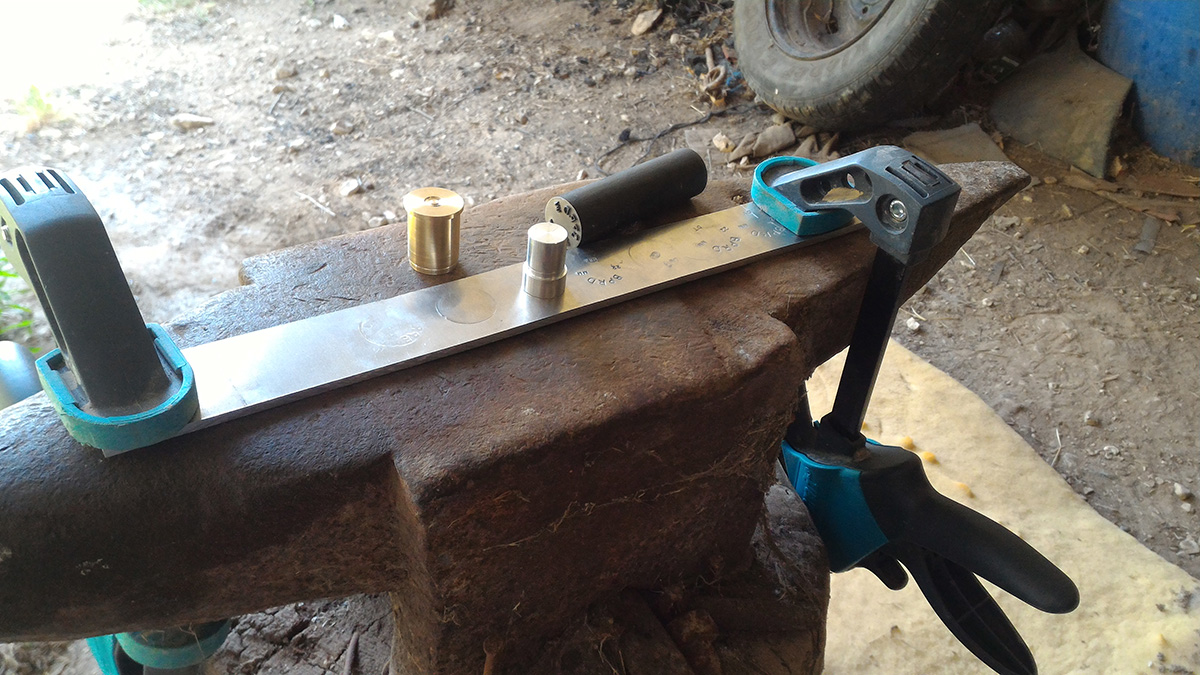 so there you go, put the casing on the jig, take the biggest hammer you can find, shout a Thor line as loud as you can and hammer the hell out of that brass piece AS F***ING STRONG AS YOU CAN! 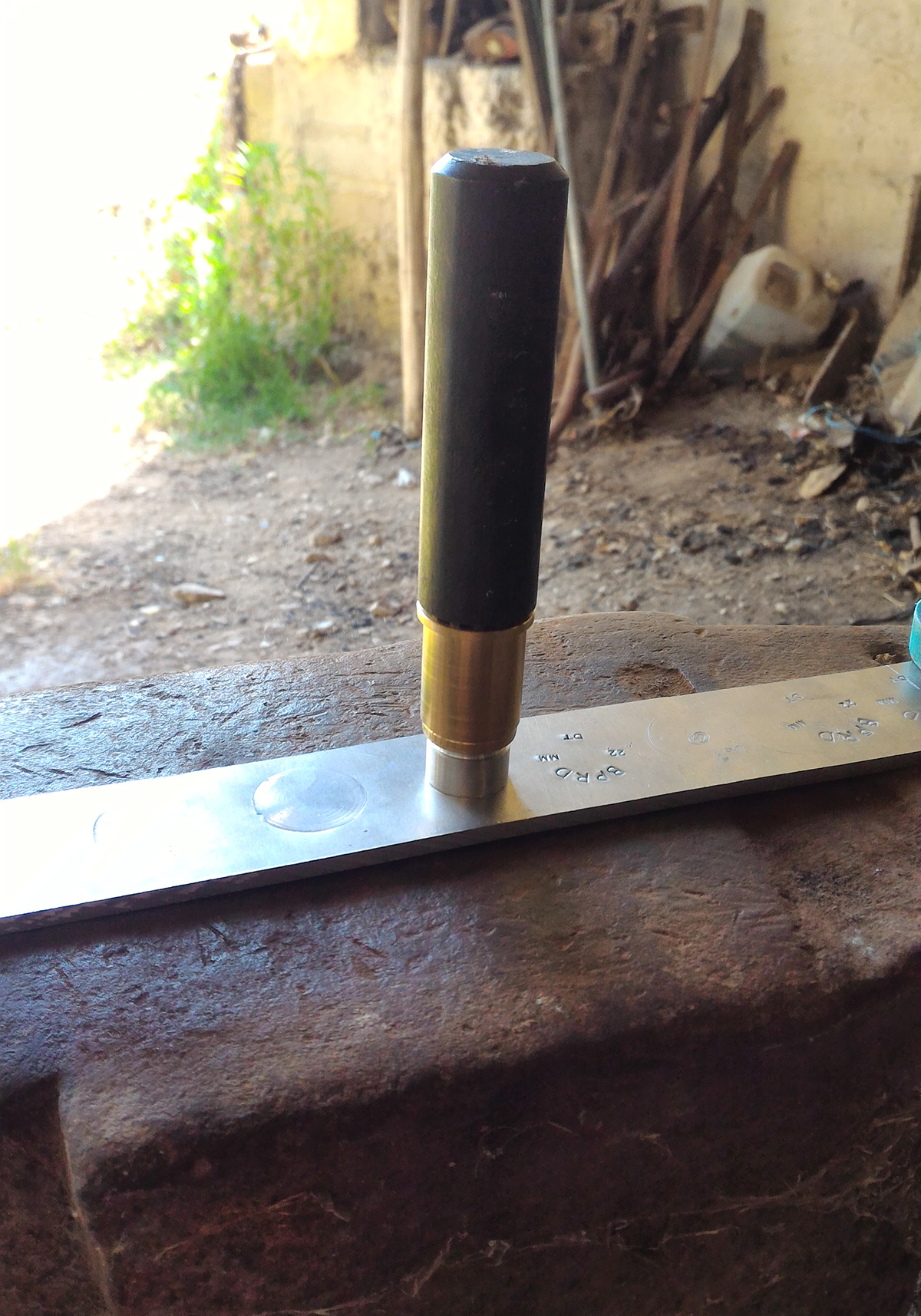 BUT, yeah! there we go! the result is pretty awesome and nothing can really bit the realism of the stamp, the material being pushed a bit on the side and all, it was a bit complicated and expansive but I'm pretty happy about the result 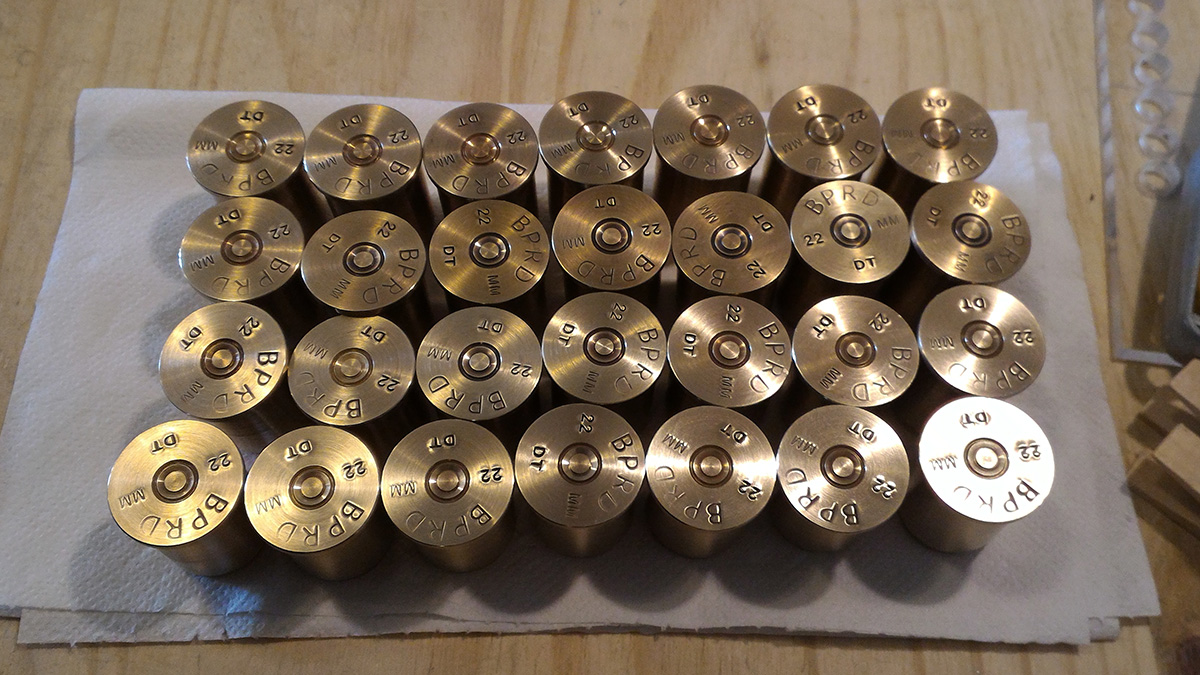 oh, one of the fun parts of this project is that like most of the time, there are a lot of different versions of those bullets, I think they did some Hero bullets a bit by hand, did probably more for the second film, and the result is very different for all the versions we know off.
In this case, I chose to go with this version for the writings and the primer in the center: 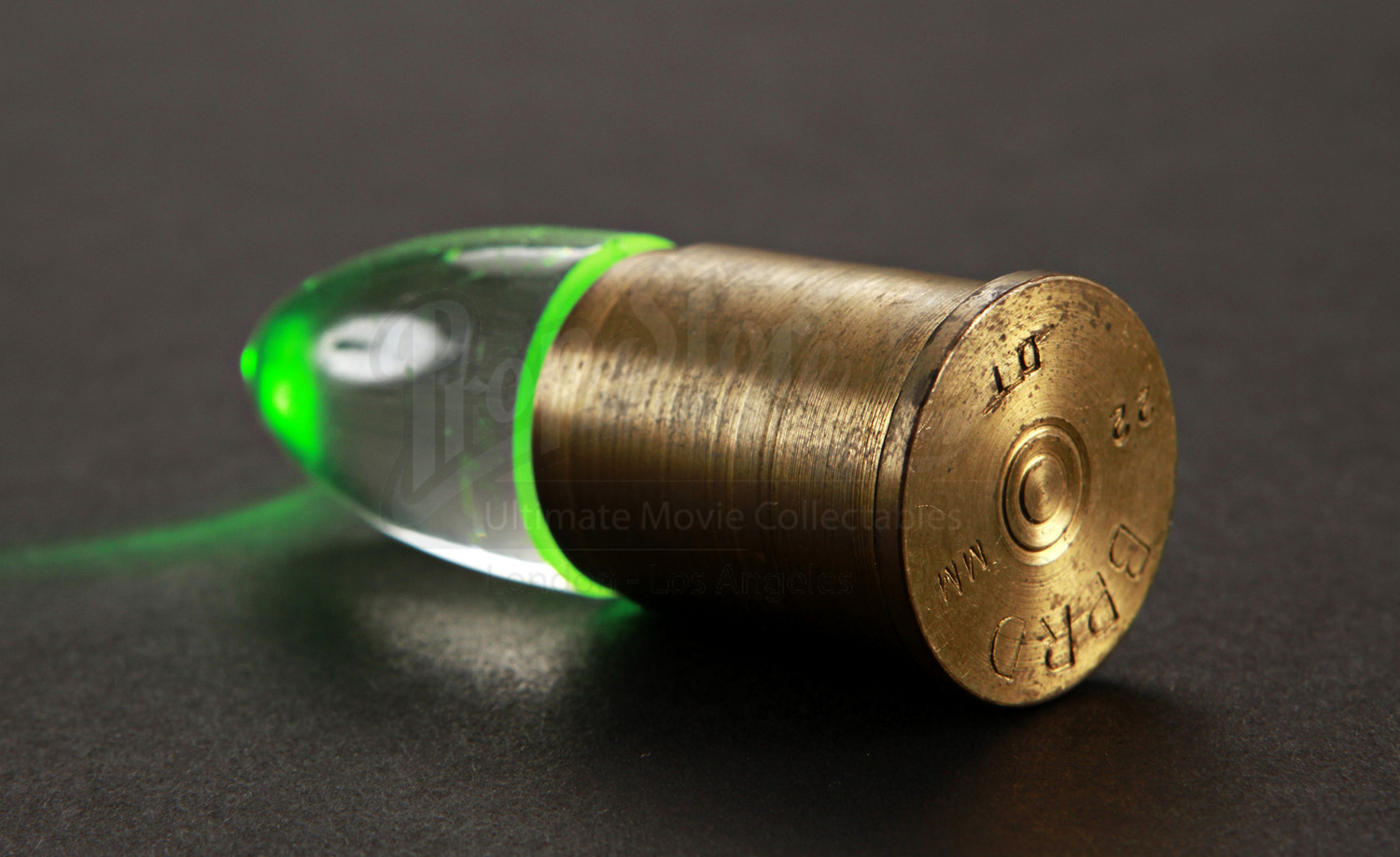 Wow those look great . I would be int for sure

ok, Next comes the actual bullets, there are a lot of versions for those too, I started by doing the regular version seen in the packaged version from the last Propstore auction,
This bullet is supposed to be metal and has lines all around it, I chose to replicate that as I gives a cool look, not seen on a regular bullet and it plays nicelly with the light, 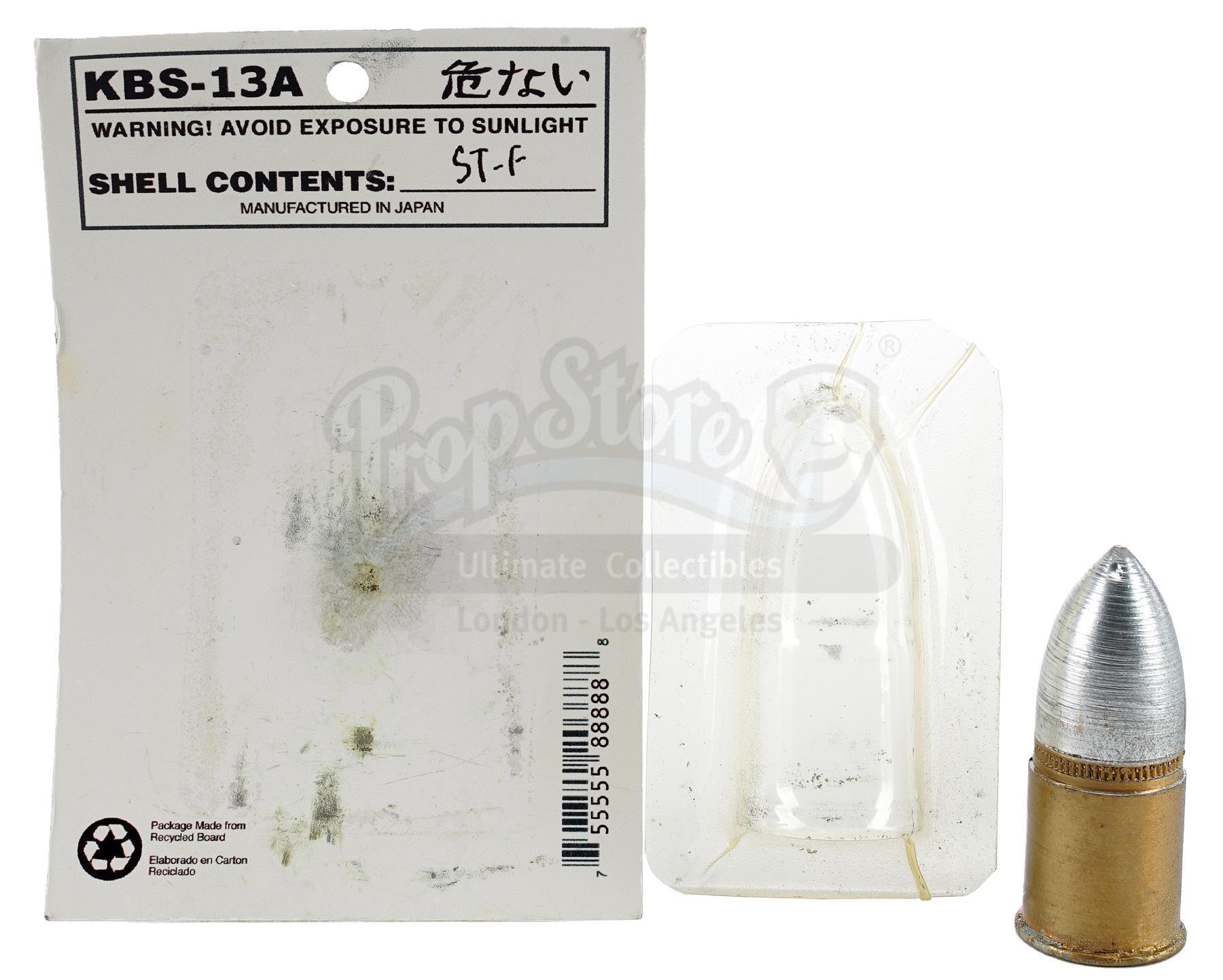 so I went ahead and started replicating that in aluminium, first cutting 5cm long aluminium pieces, then turning down one side to fit inside the casing, then doing a large bevel on the oposite end: 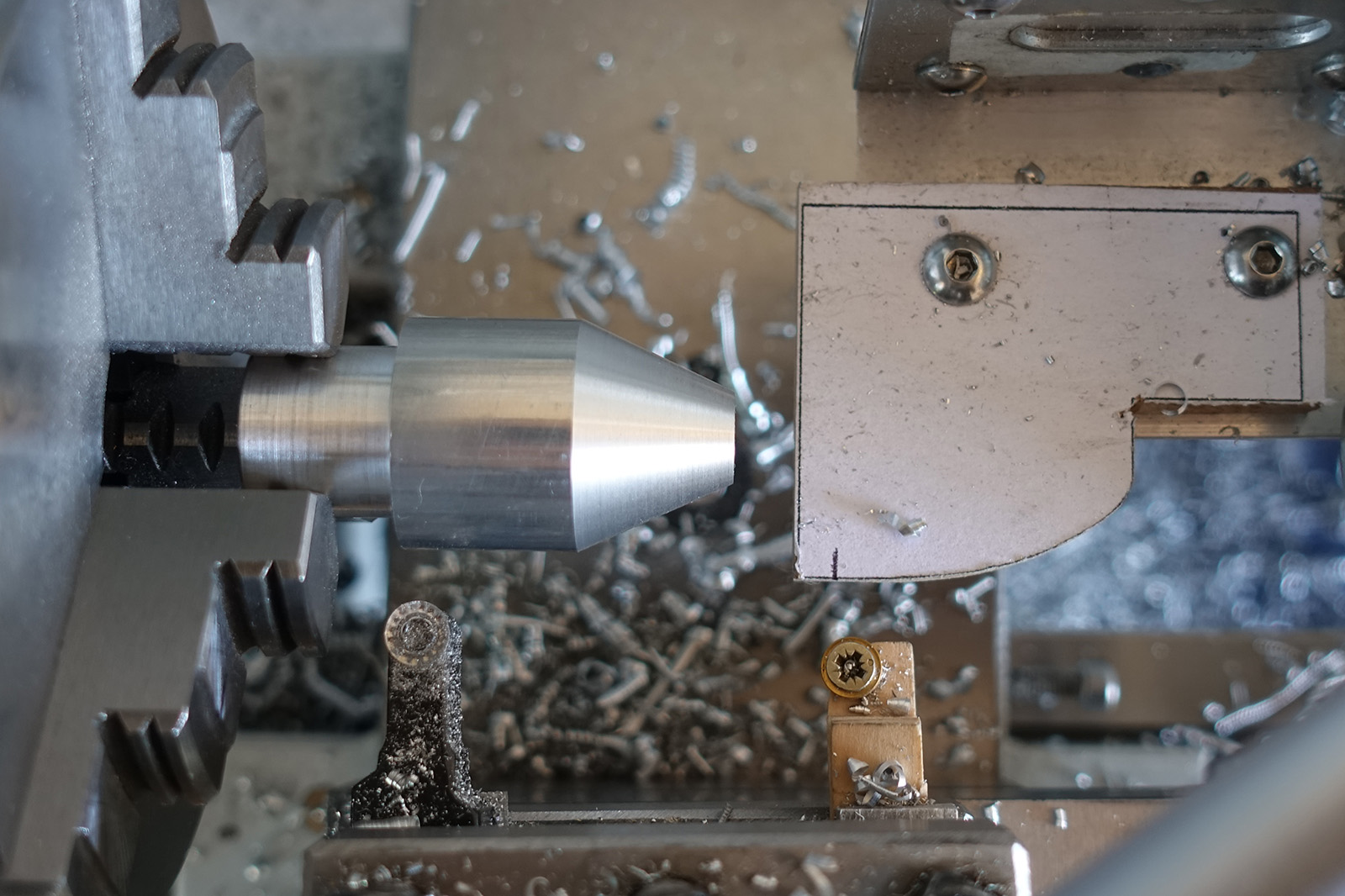 For the final shape, I used the same technique I used for the Padme blaster eggs, a small template and a second tool on the lathe to follow the curvature on it. I used the round tool as I wanted nice, large and shiny lines on the bullet and this is the best tool for that result: 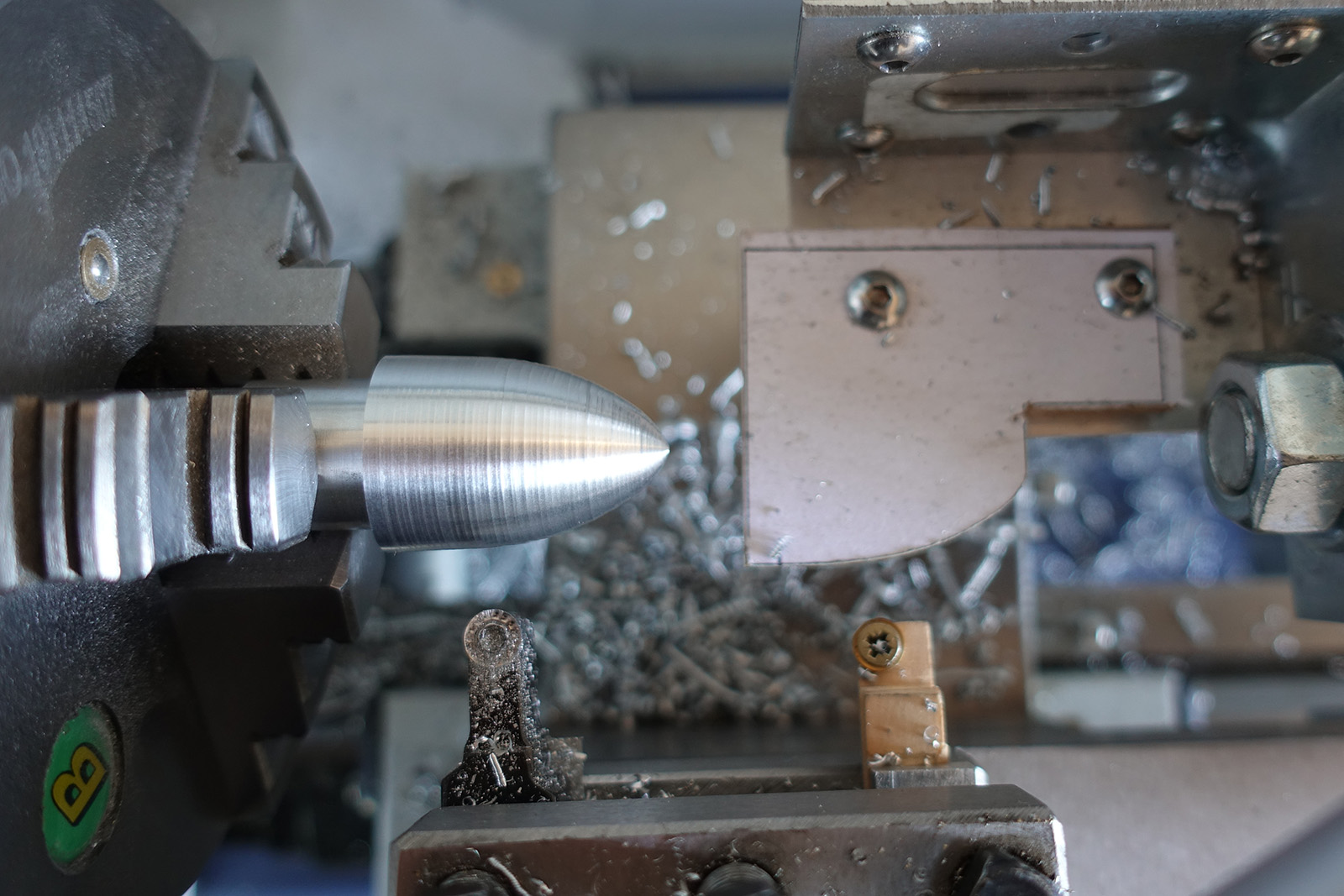 and here we go!

ok, we are not finished yet! this is just one kind of bullet!
I bought a resin 3D printer a few weeks back and this was a good project to use it so I started printing clear resin bullets too as well as a few cool variations, including some with the metal tip at the end of the clear bullets, that I turned "free hand" on the lathe too: 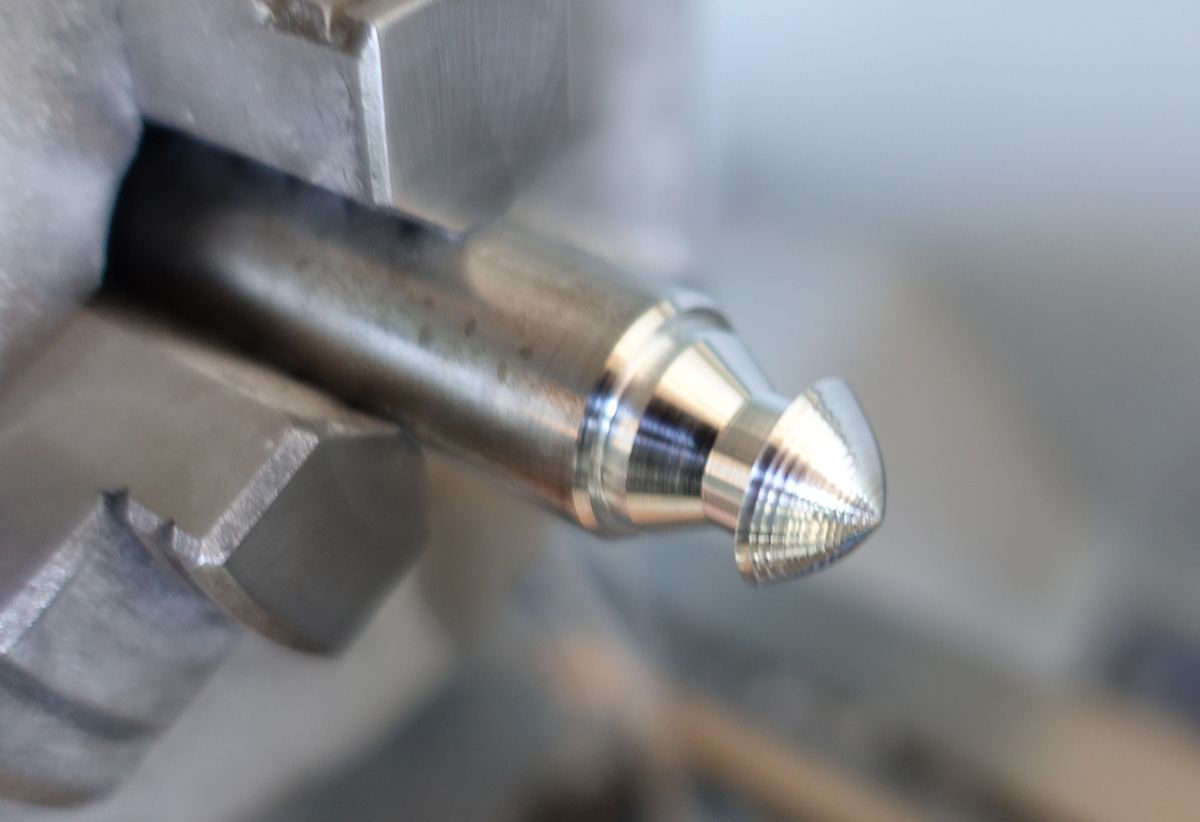 Yeah yours blow away the originals . I want them all lol . Really amazing attention to detail put me down 1st on the list

You seen the ones with the liquid in them correct ? Those and the light up ones would be off the chain 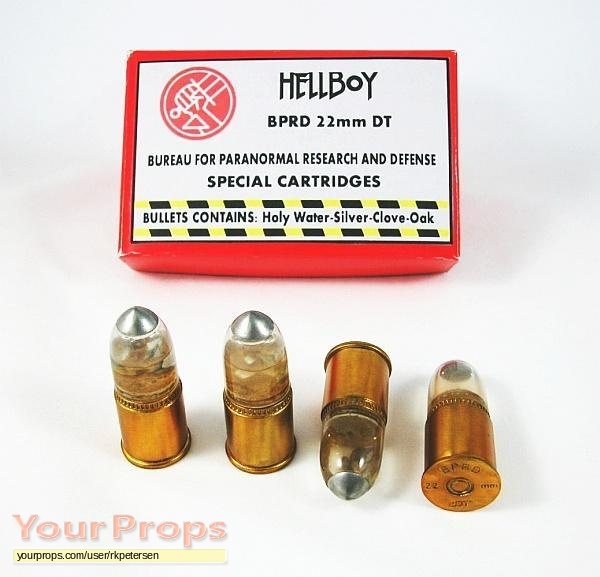 Not my pic but have admired those for some time

RPF PREMIUM MEMBER
ahaha thank you so much Knightmare! no worries, the bullets will be available on my website in a few hours, just need to finish that WIP and write the project run thread too. I'm a big writer lol, so it takes a bit of time and yes, regarding your second message, i have seen a lot of versions and did a few versions myself. Maybe not enough to please everyone and no electronics so far but I think people will be happy with the variety of offerings from my first run already

Ok, moving on now to the packages as well! I think this is a really cool little prop from the movie and it was pretty cool that one was sold at the last Propstore auction, so I decided to replicate the packaging too.

printing the paper part was easy as I'm first a trained compter graphics and 3D artist, so replicating the design with the proper fonts and details took some time but it was the easy part.
I printed a first prototype on thick white paper but the original is a quite dark off-white, so I then bought a cool pearl grey thick paper that really work well 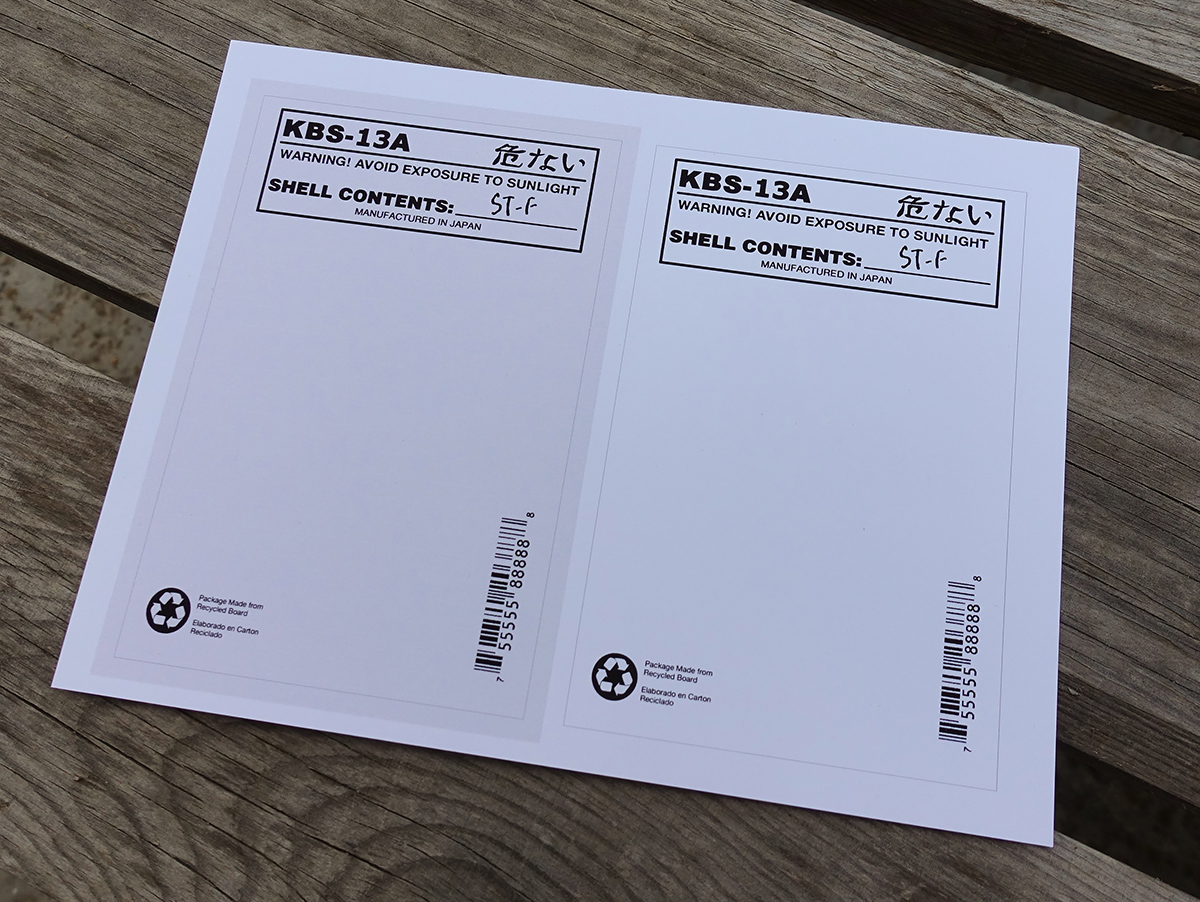 ok, now I needed to figure out the plastic part... hum!
well, I started wanting to build my own small vacumforming machine because i saw the prices where quite expensive, but then I found a really small and really cool machine on a DIY website, actually intended to do cupcakes molds it was sold with it's own food safe clear PETG sheets and all so I went ahead and ordered that!

so, since the bed of the machine has large holes everywhere for the air, I modeled and printed a mold for the vacuform with the flat area part of it, so I get a nice and flat result with no hole traces: 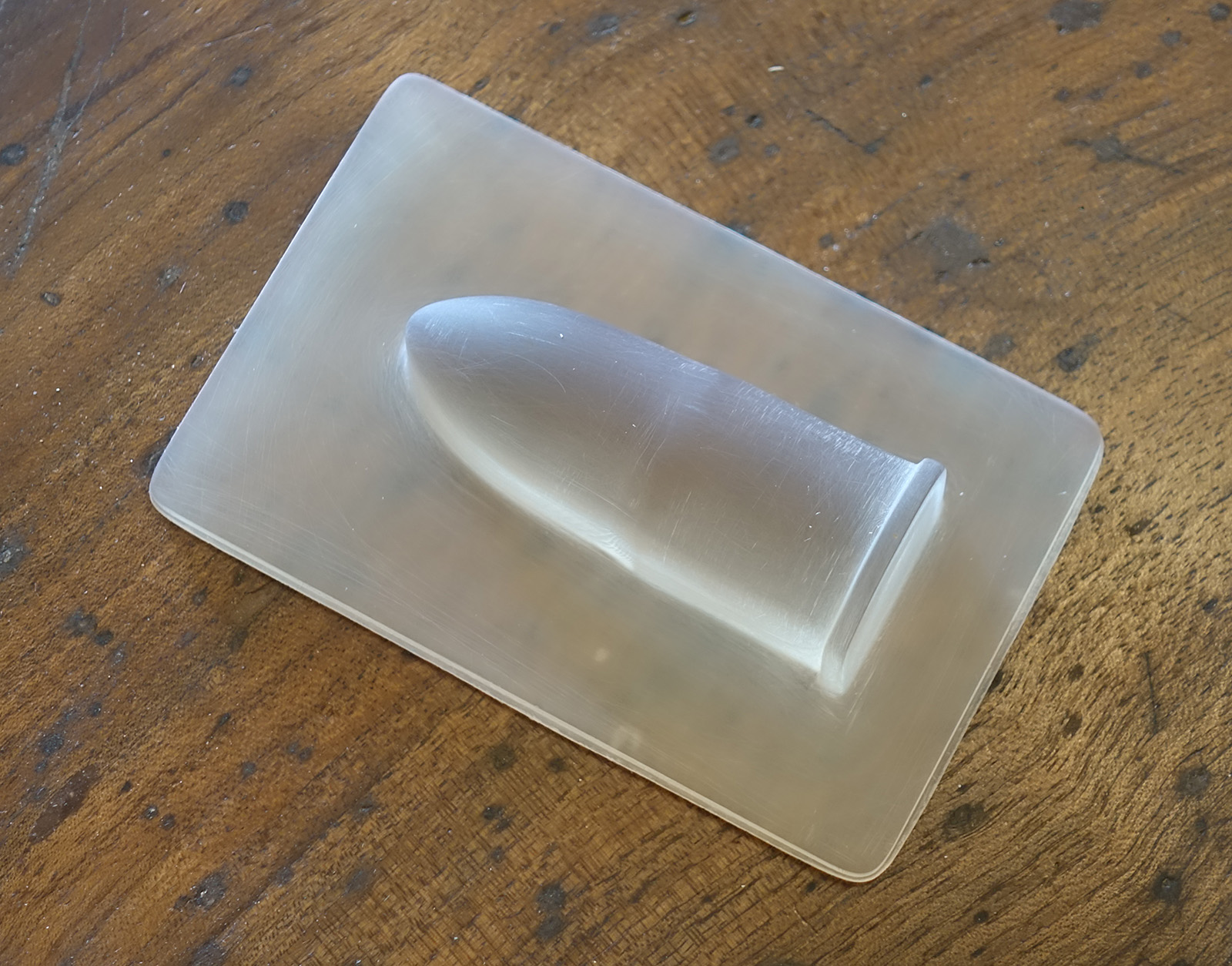 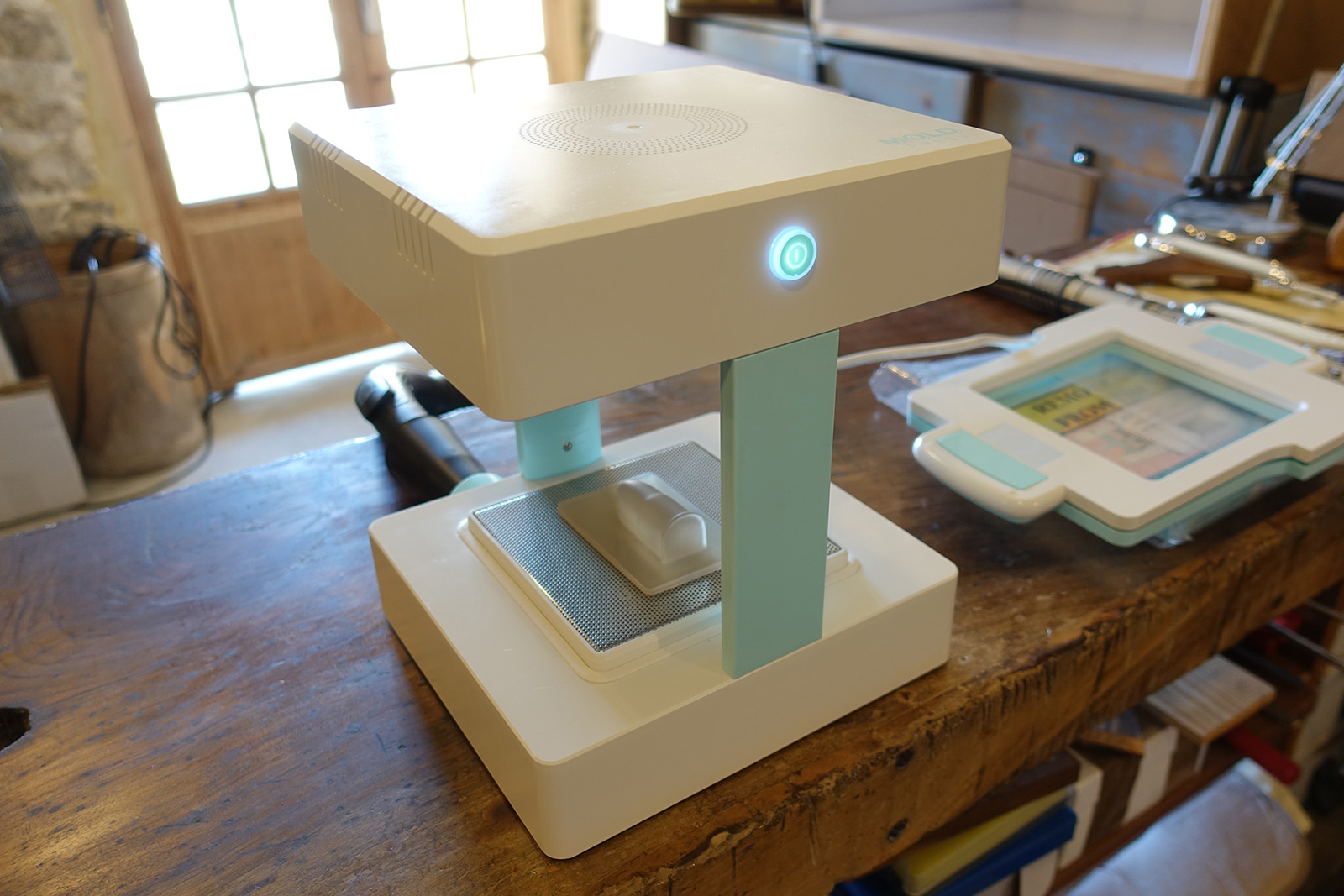 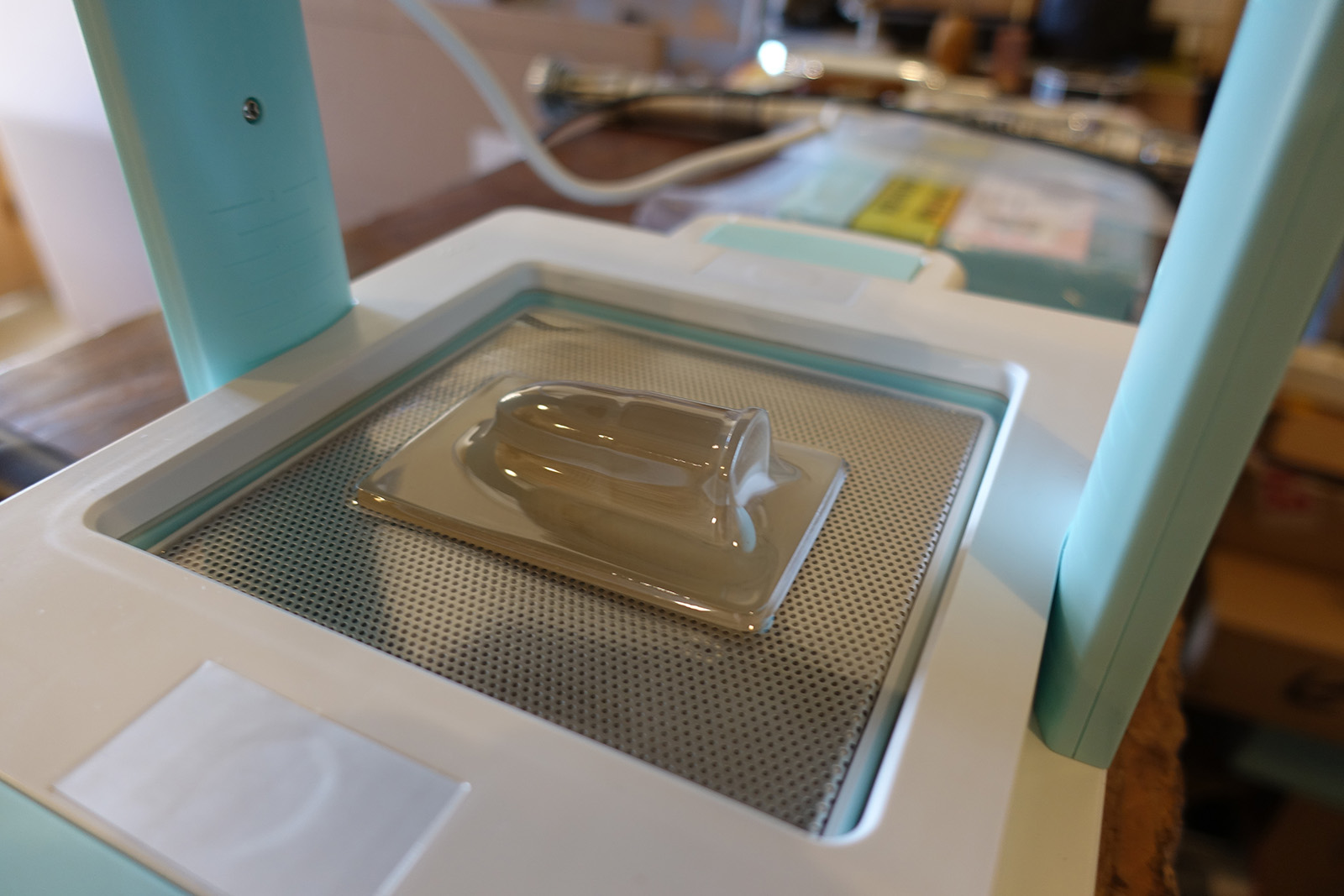 ok, so, I don't know if I can really say it was unexpected, but the worst part for this project was actually figuring out how to glue the damn plastic on the damn paper! 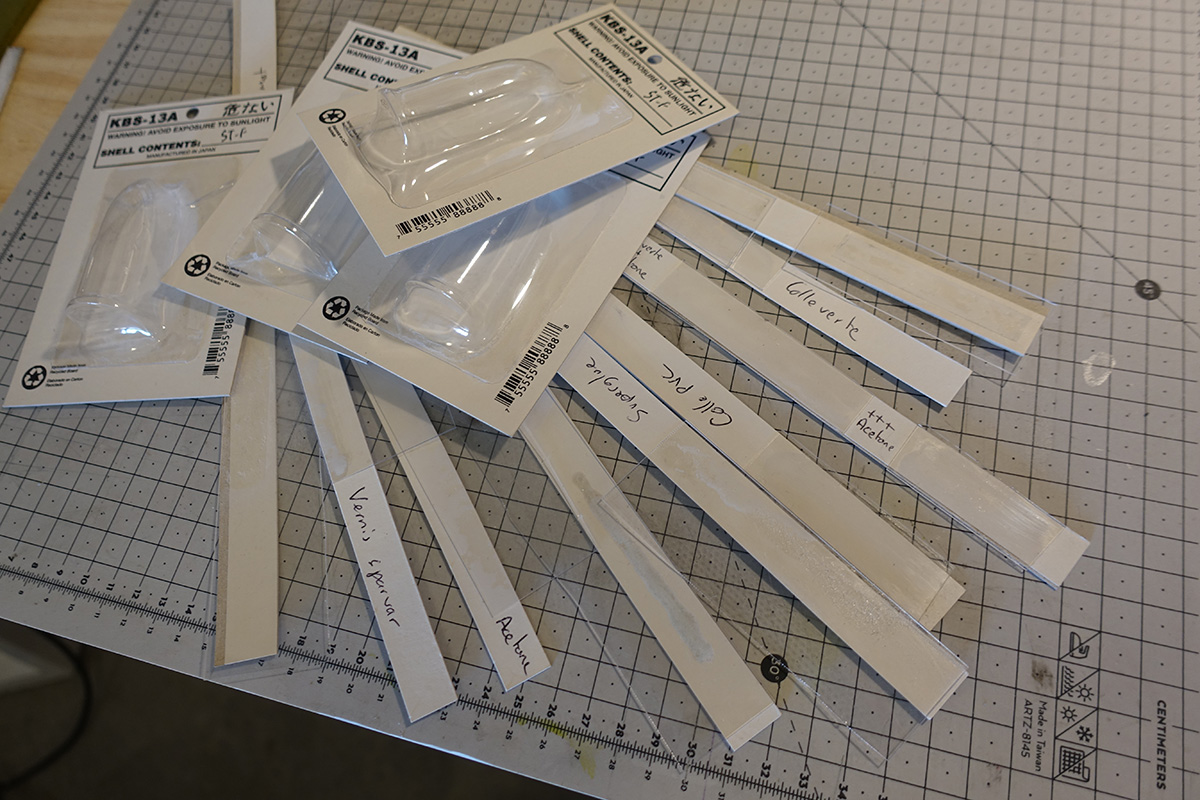 and it turns out the best result I had was mixing the green 3D/stoch gel glue with acetone, applying it quikly with a brush and pressing properly on it while it dries.
my tests worked the best when using painter's tape to avoid any glue squeese outs and to make sure I actually glued in the proper place: 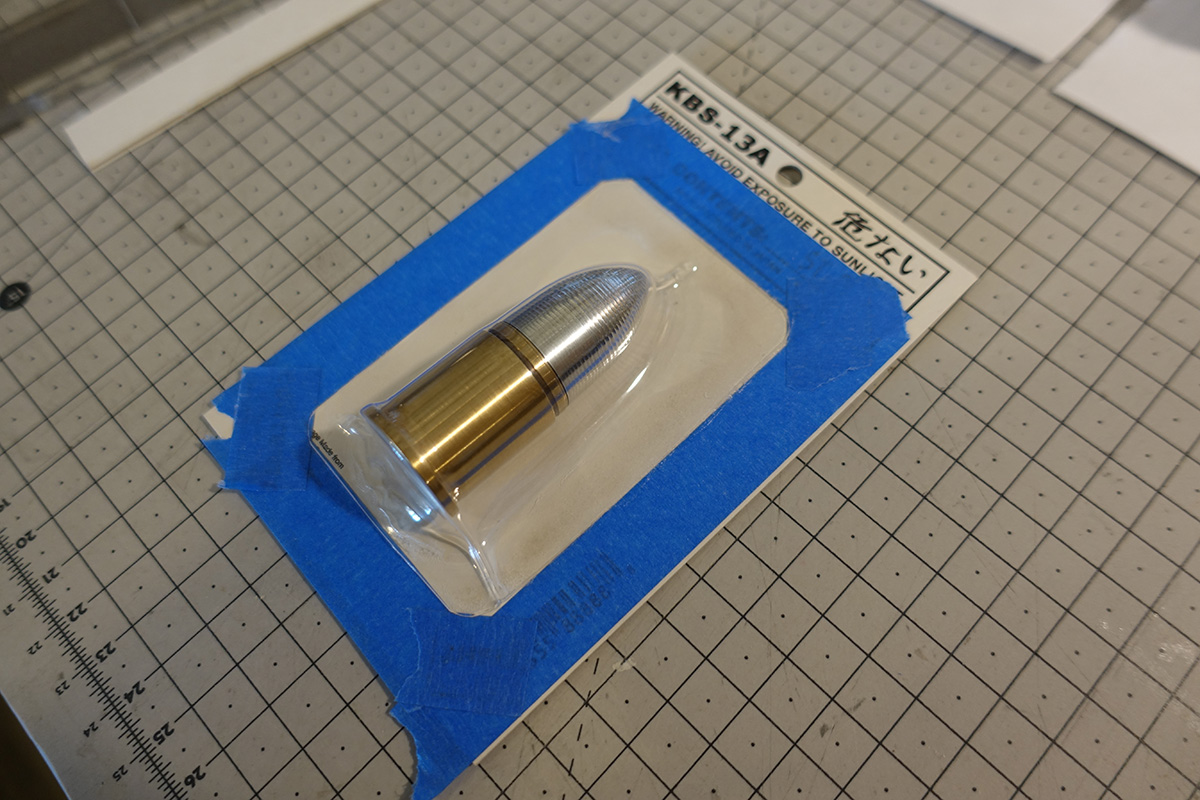 the glue in question in case it wasn't clear: 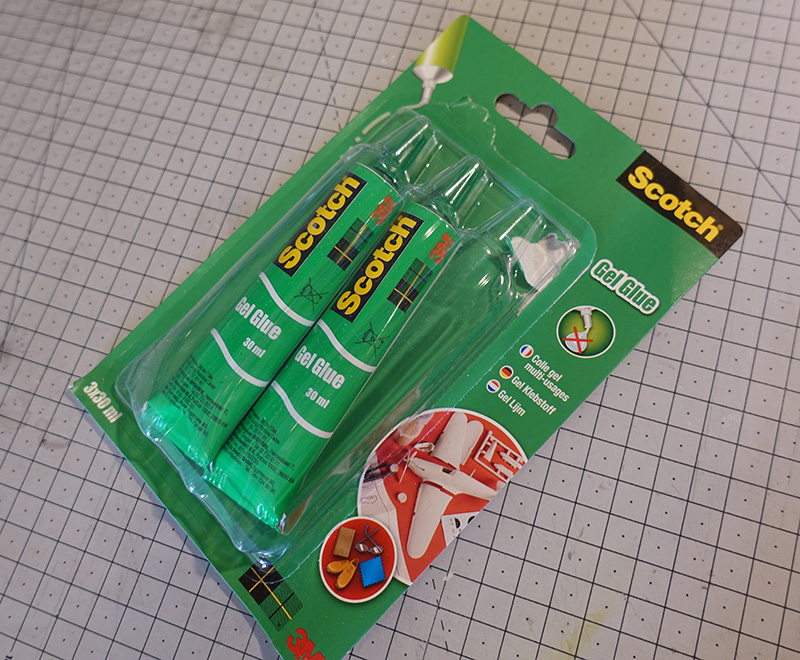 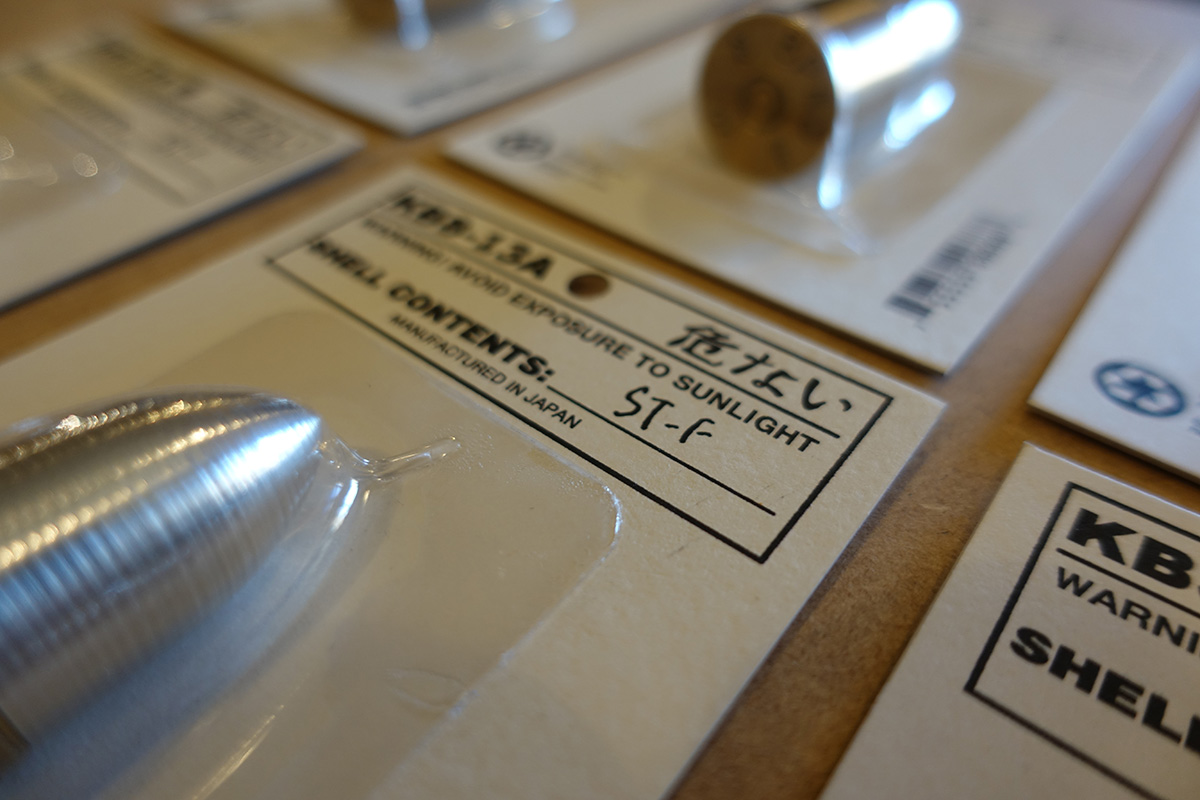 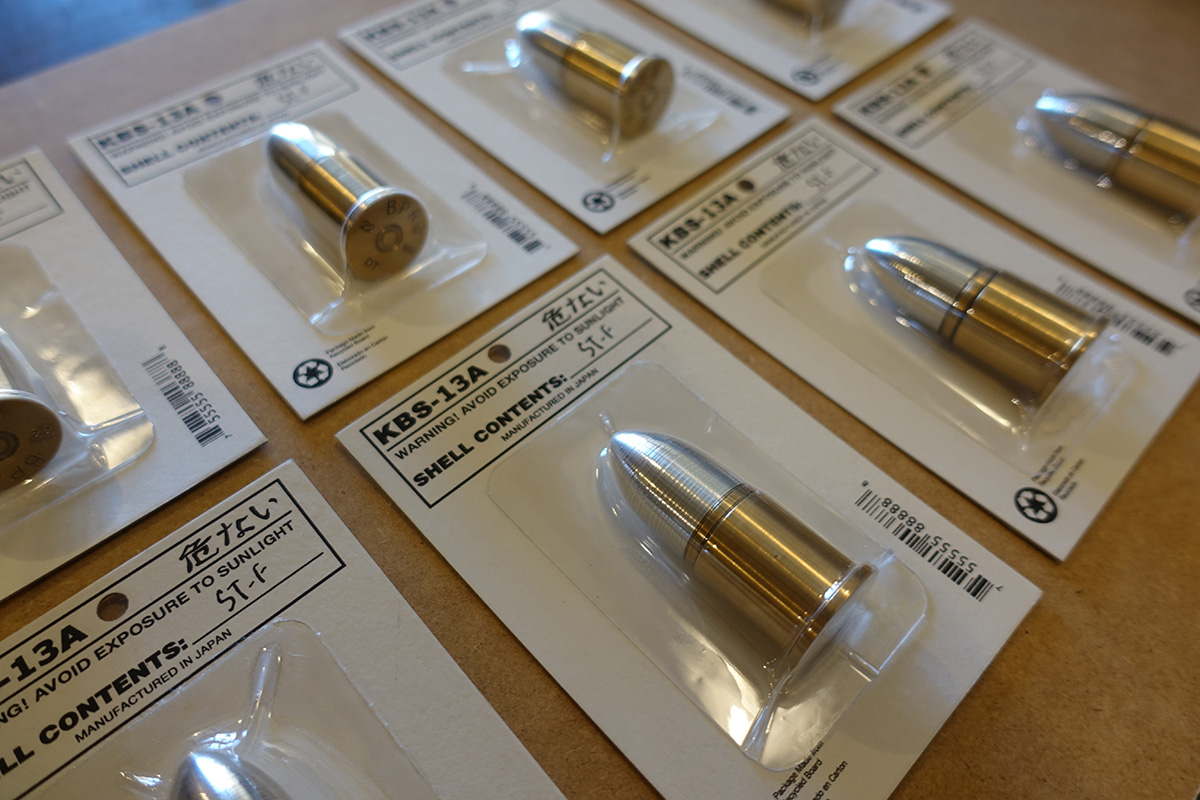 BTW, the plastic is not going to come off like on the original, the way I made is as "artisanal" as they probably did and it's far from looking clean and industrial, just like they did, but the plastic is, I think, forever married to that paper: 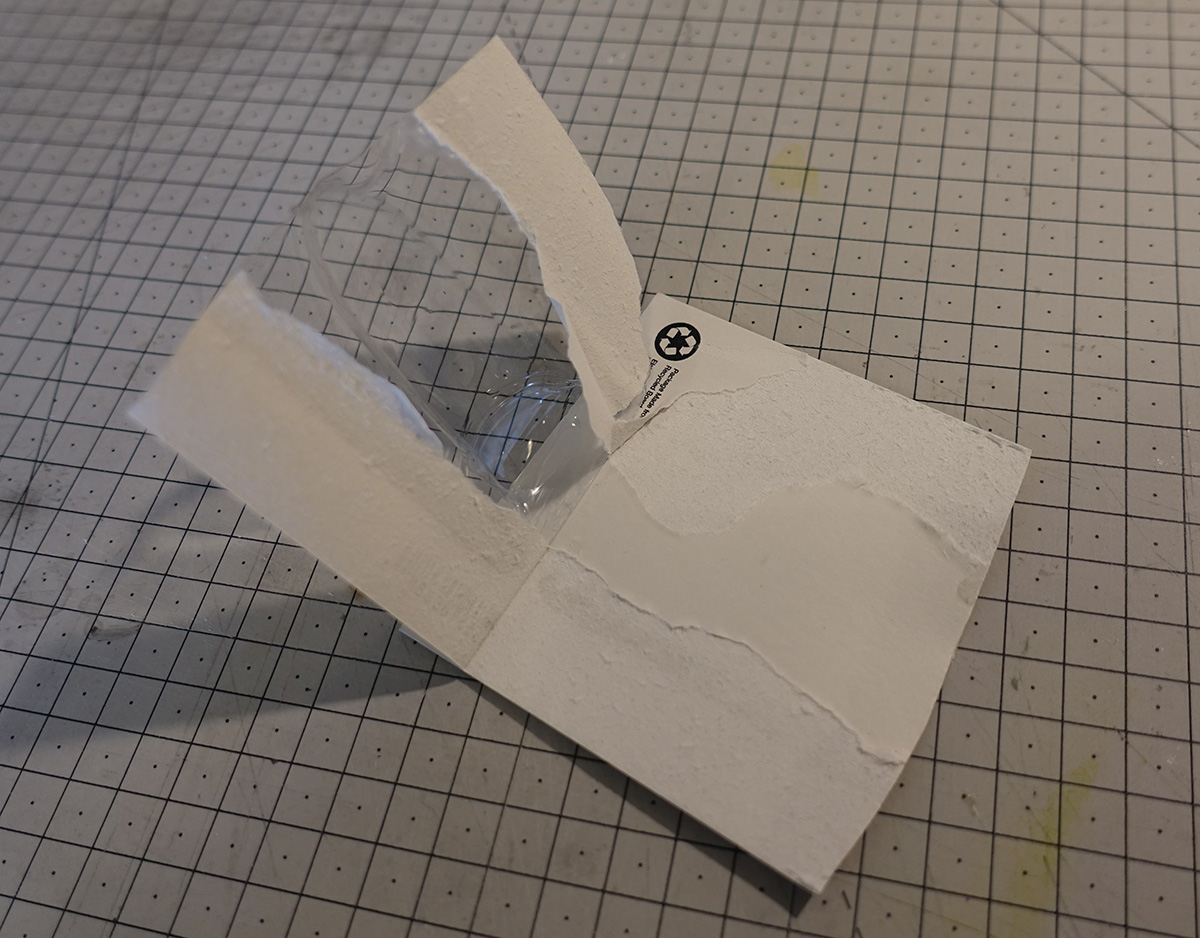 RPF PREMIUM MEMBER
ok, so I think that will be it for the WIP presentation, I'll leave you with a couple studio pics and go write my long project run thread now 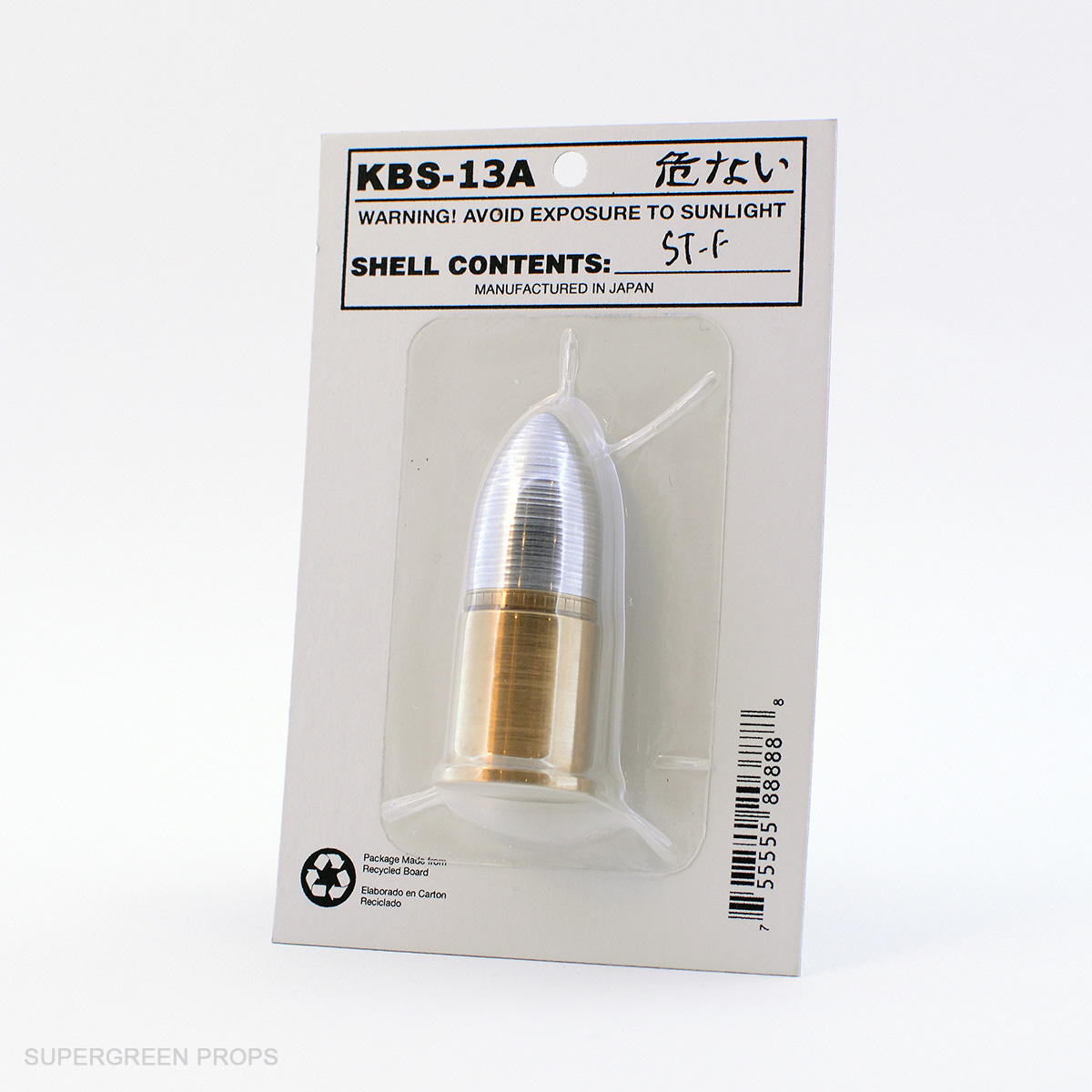 cheers guys and thank you for reading me

eethan said:
ok, so I think that will be it for the WIP presentation, I'll leave you with a couple studio pics and go write my long project run thread now

cheers guys and thank you for reading me
Click to expand...

Put me down for one of each stunning work !

Hello everybody, I am back with a new small project :-) as I explained in my WIP thread a bit earlier: https://www.therpf.com/forums/threads/hellboy-good-samaritan-metal-rounds.340976/#post-5225521 I wanted a bit of a nice change of pace from my Star Wars projects, the Padme blaster is quite...

RPF PREMIUM MEMBER
You machined the primers in just right, and that stamp was a great idea. These look fantastic, dude.

RPF PREMIUM MEMBER
thank you so much Veektohr, much appreciated

Really awesome work dude.
I think I might need to finally get me a Samaritan of my own, so I can load it up with these...

Man the attention to detail is next level, this is pretty inspiring dude.

How to get a resin cast to look like real metal?

Source and/or name for this perforated craft metal sheet?