Here is my build log for the Hellboy Good Samaritan Gun, its something I have wanted to make for years and finally with advances in technology and of course seeing the amazing build by asavage I decided it was high time to get to it!

I'm not much of a 3D modeler myself so I recruited AndersEFP , the same Anders who made the equally amazing Blade Runner PKD 3D Model.

Here are some of Anders early models of the Samaritan. 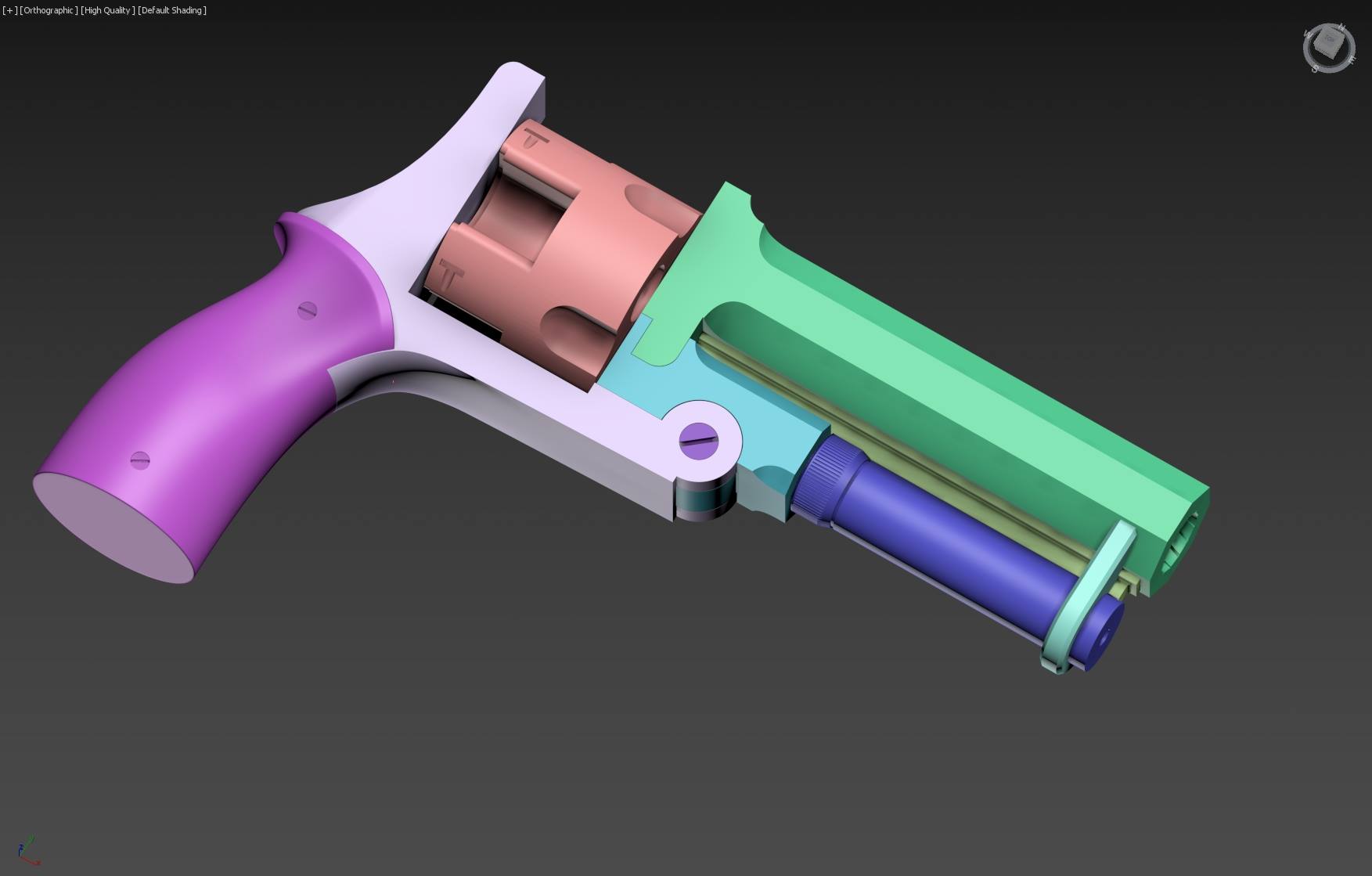 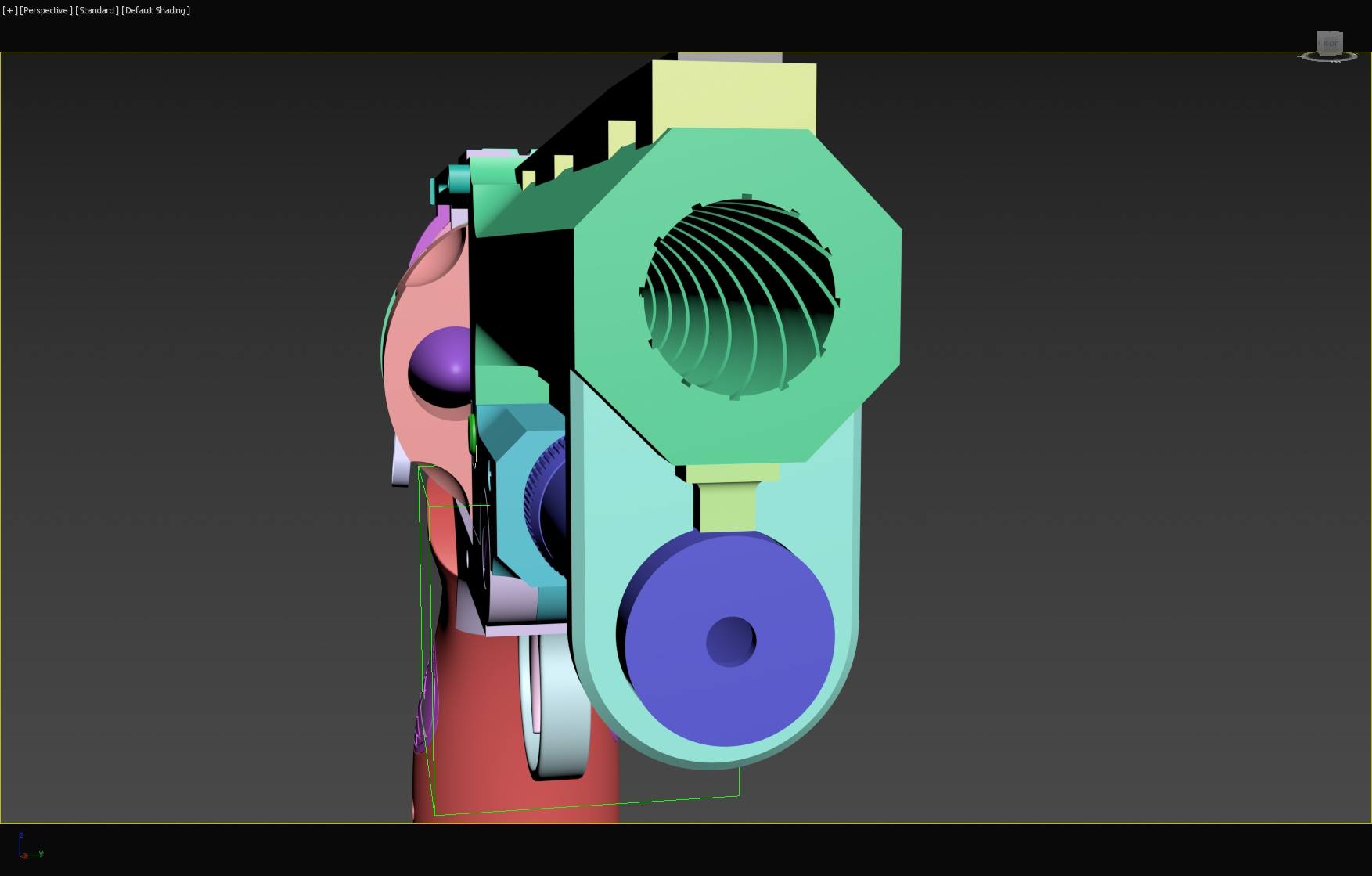 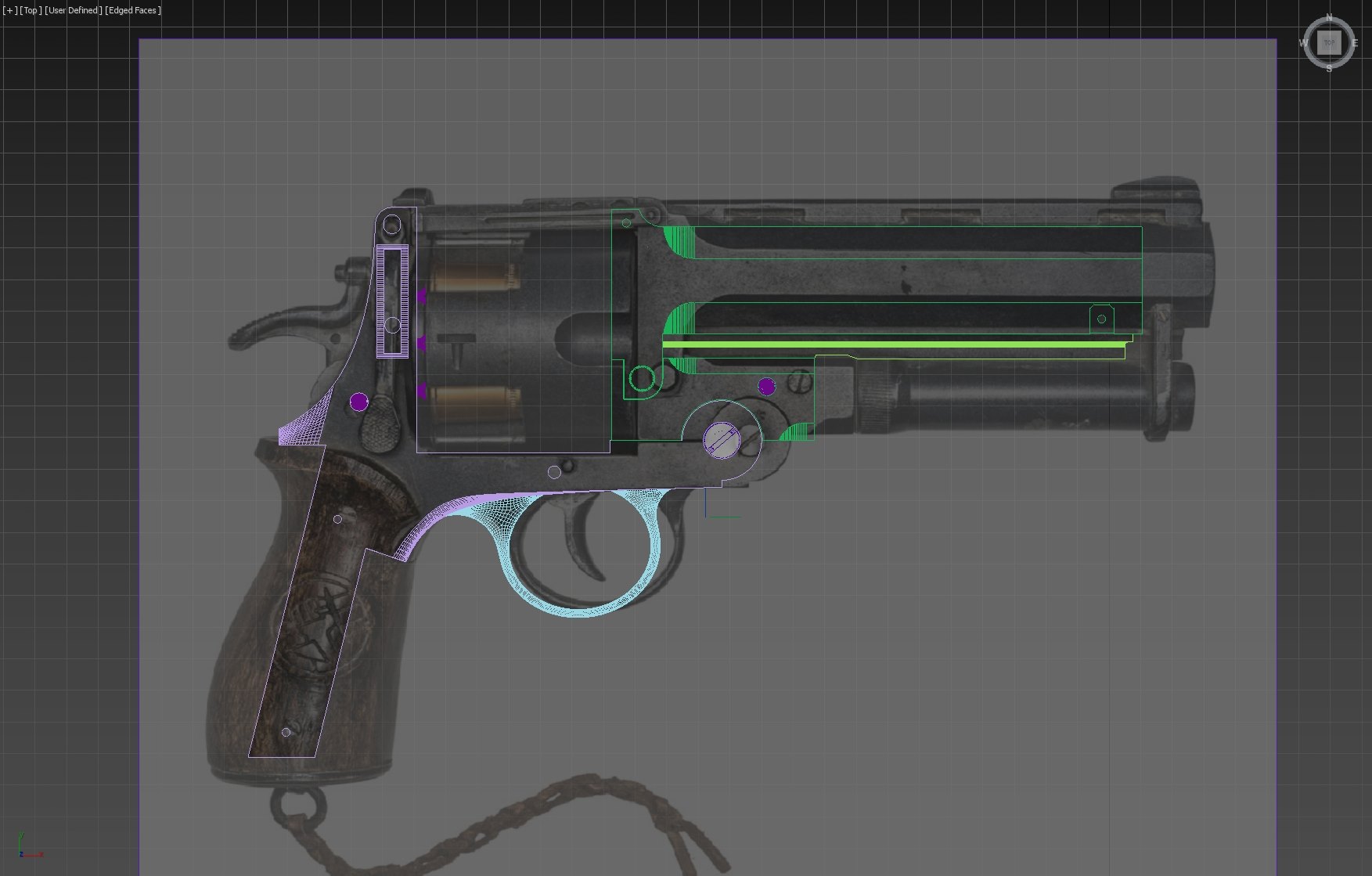 But eventually we got to a point where we were both happy with the way it looked, so on to printing! 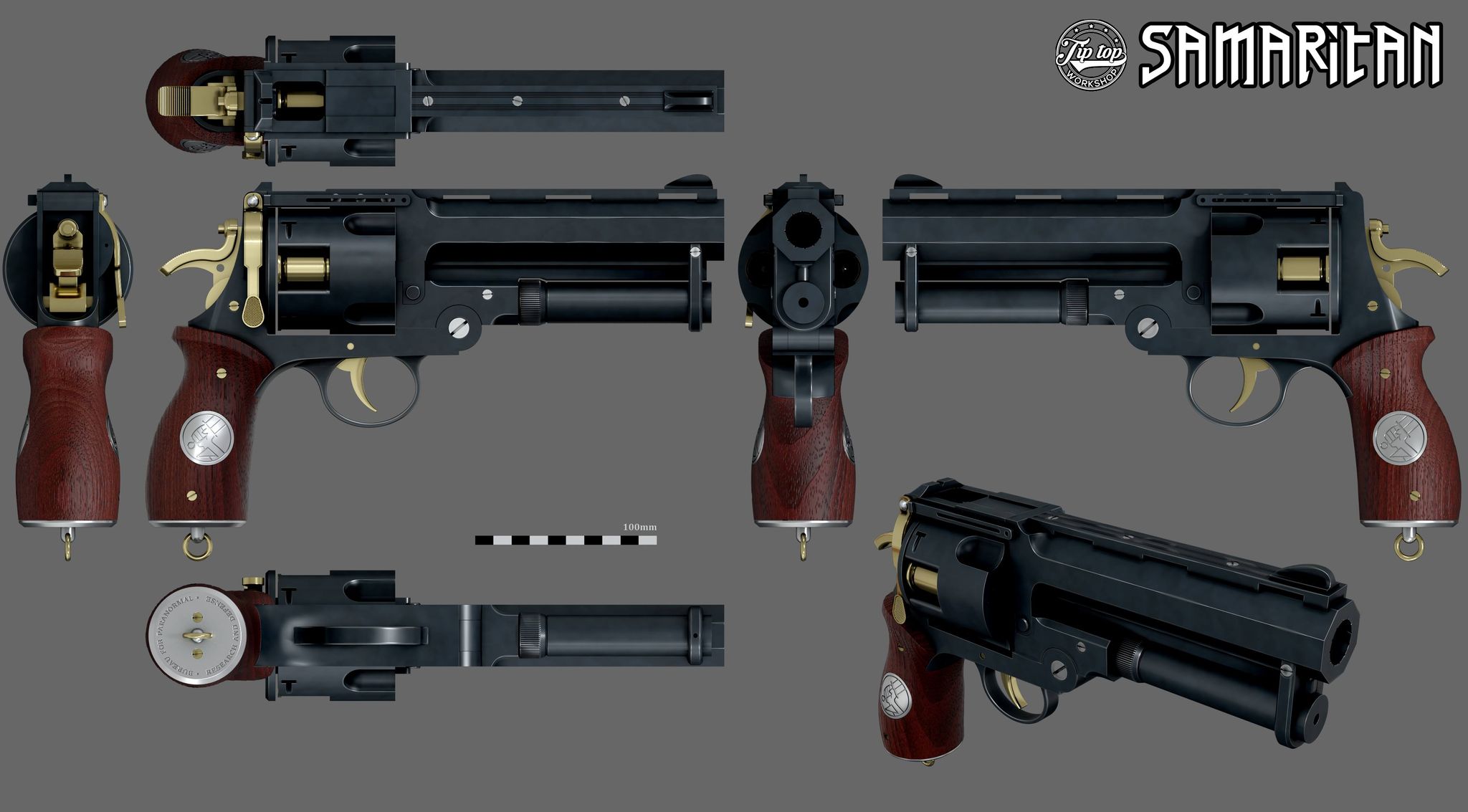 I am fortunate enough to have access to a rather large resin 3D printer, so I managed to get the whole thing done in just two prints!

Next up was to sand all the parts, But I couldn't resist to try a dry fit 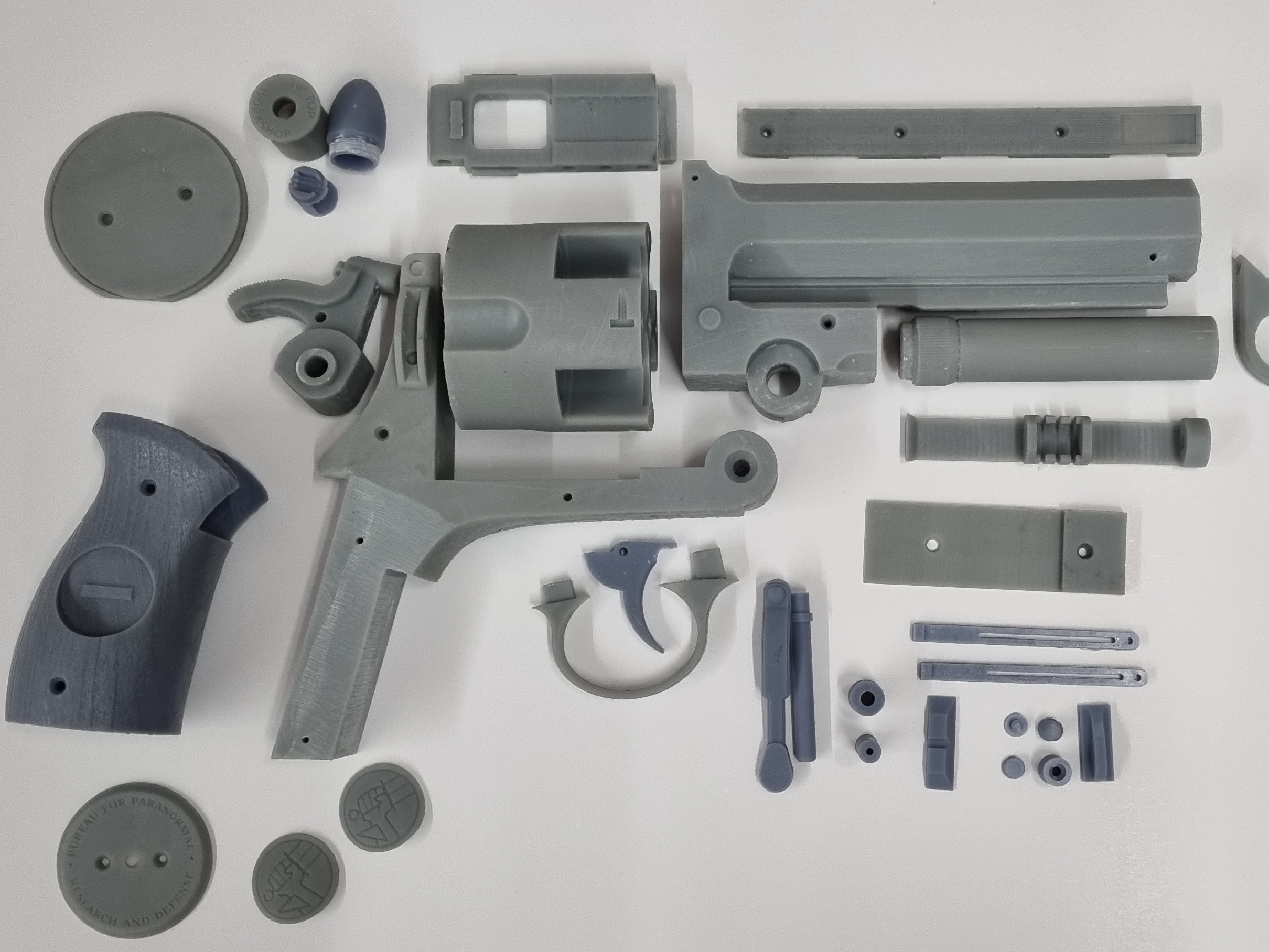 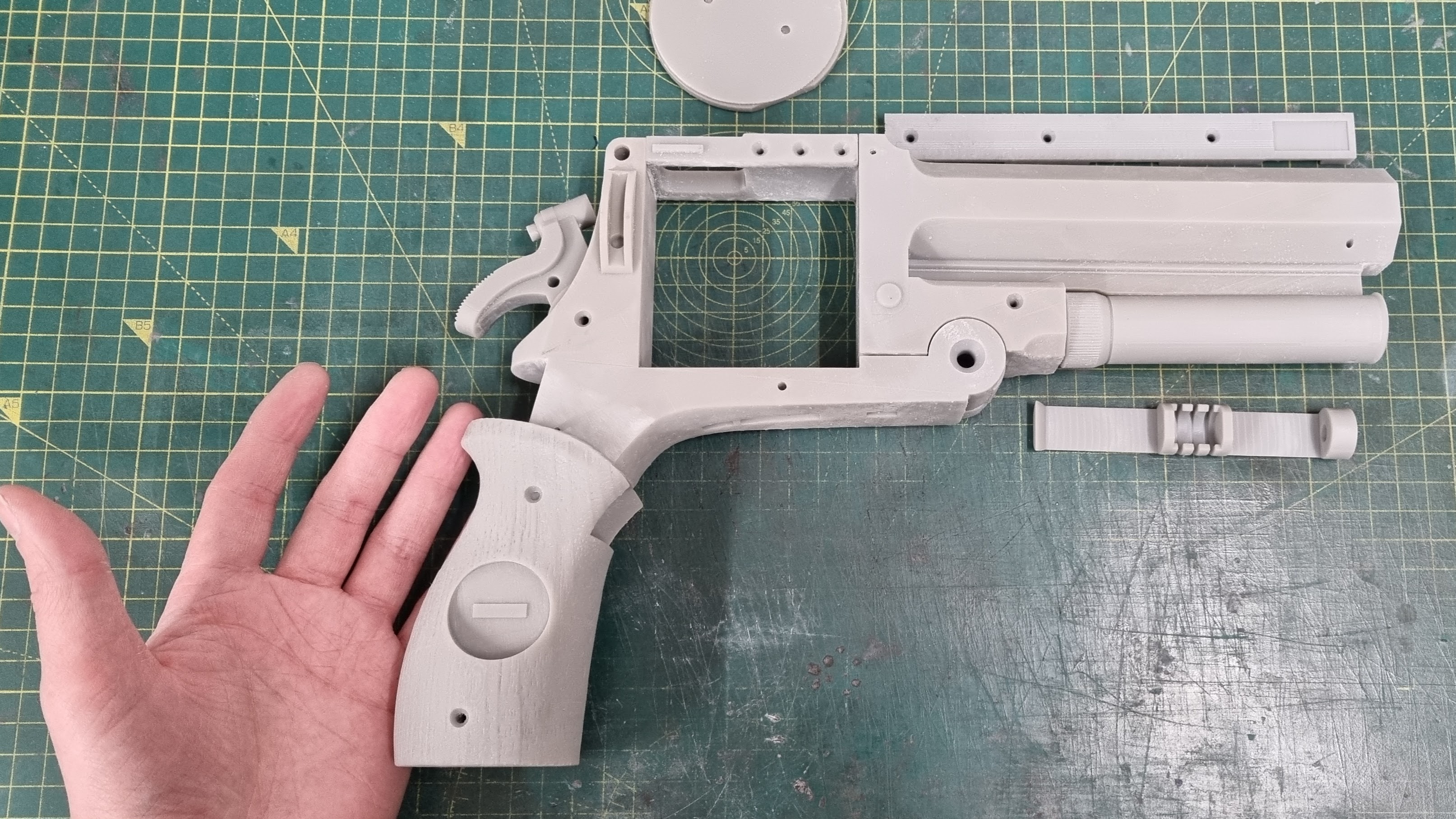 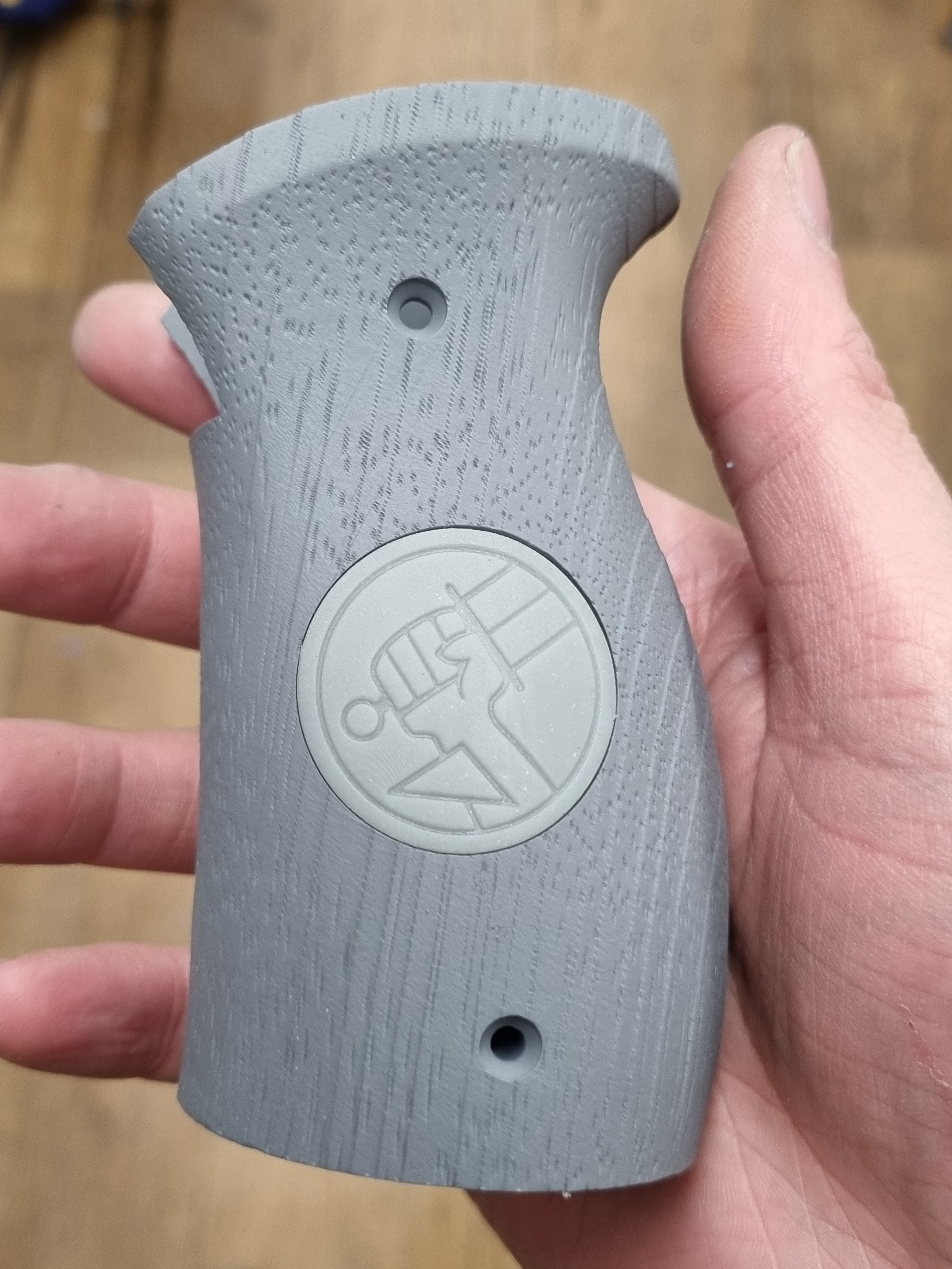 After this I primed the parts.

This thing is HUGE!

Here they are all ready to be moulded, as I waited for my rather large silicone order to arrive I decided that I wanted to make the BPRD logos and grip plate out of Pewter as I feel the model deserves some real metal at the very least. So I moulded them and made some casts. 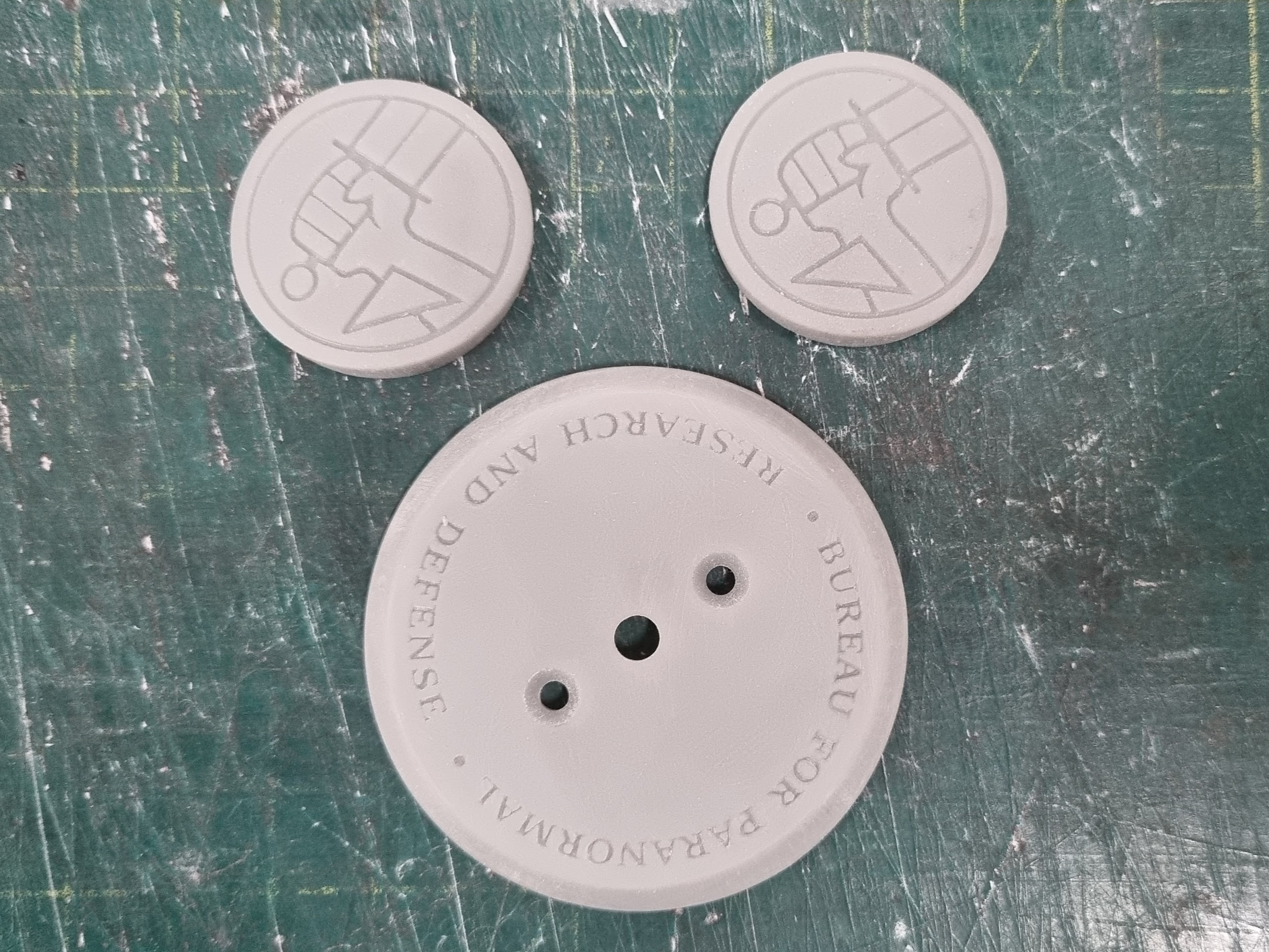 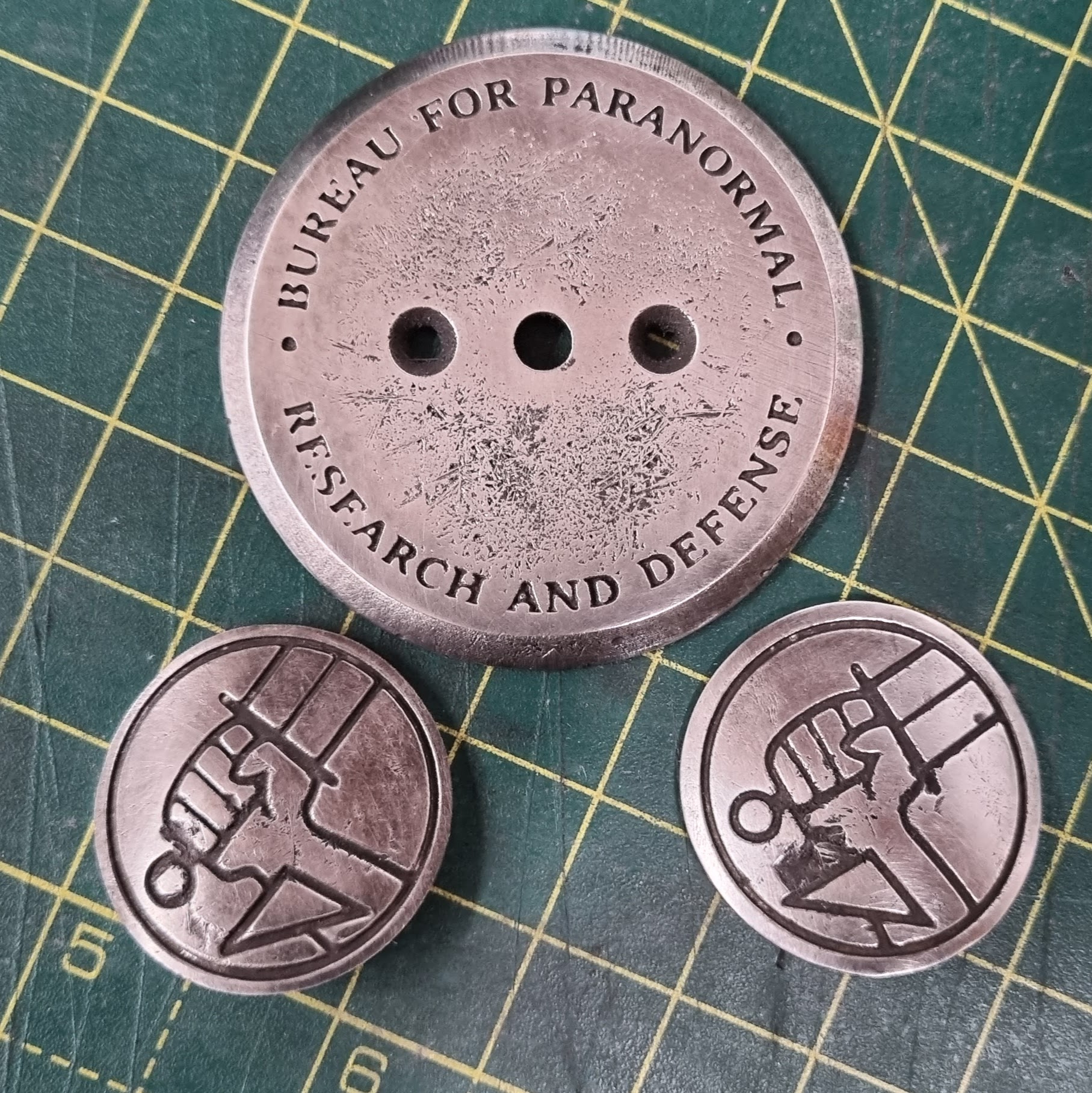 A little rough for the first cast but as its Pewter I can try as many times as I like to get them right.

This is as far as I have got for now, My Silicone has arrived and in my excitement I have already started the moulds and forgot to get some pictures, when I open them up tomorrow to cast the 2nd half I will take some!

For now enjoy this exploded view that Anders knocked up for the model. 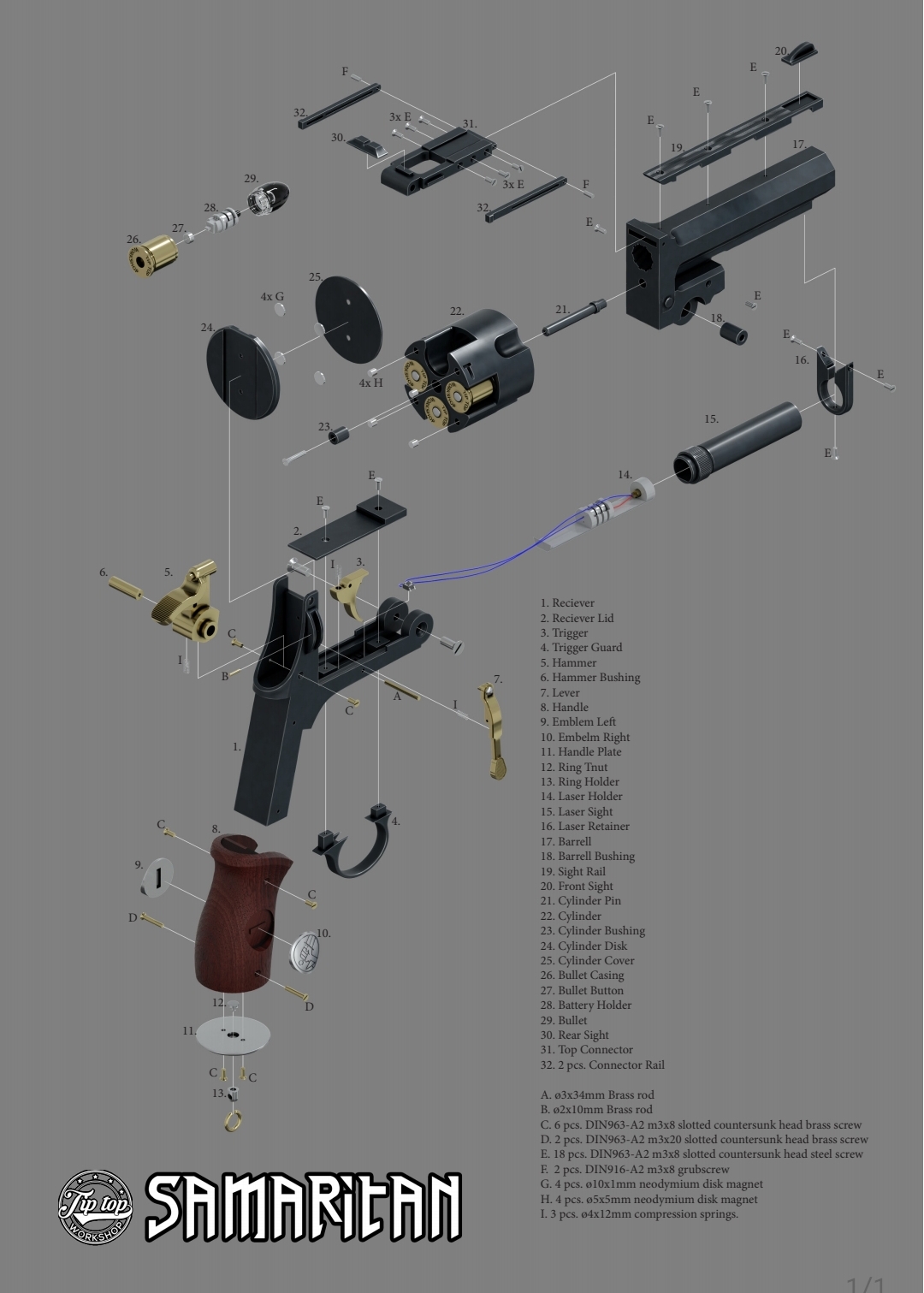 RPF PREMIUM MEMBER
very nice! Anders' model is amazing, the print quality is great, that is going to be a sweat prop

mate Stunning! How can I get my paws on this?

Will the model be available?

For the main body I need to make a 3 part mould, so I'm starting with the middle section.

I used some nuts for registration on the back side, for the exposed side I will cut some in when the silicone has cured.

Poured the Silicone for the second half of these parts and even cast some of the first few bits!

Thats it for the weekend, I will get back to it on Monday. Thanks for the messages and Yes I will be doing a run
Last edited: Apr 9, 2021

RPF PREMIUM MEMBER
Here is the weeks progress, a little slow going as this part took a few sections to mould it up.

First couple of cast came out quite nice.

I own a Weta Workshop original. 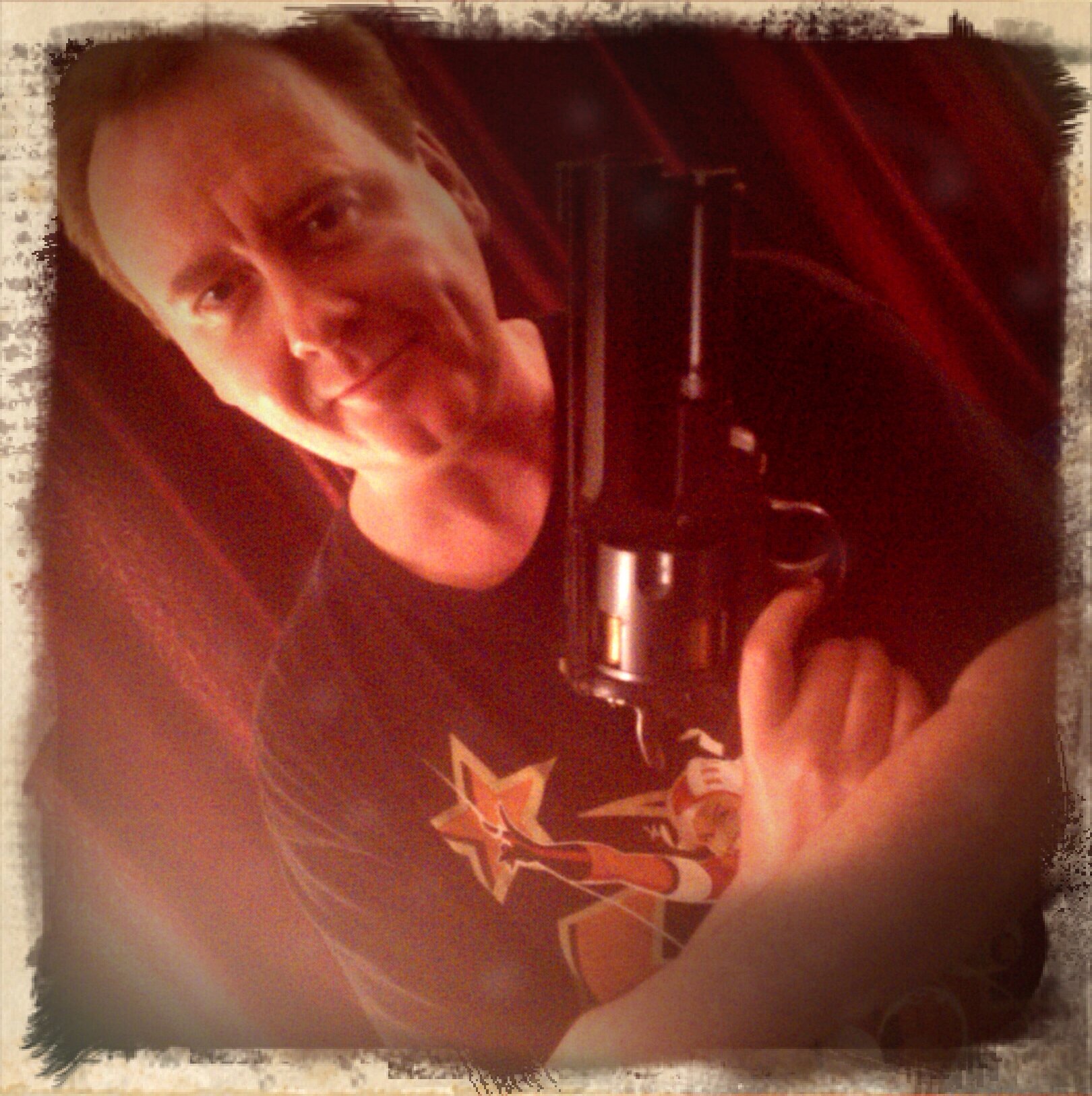 But then, I did co-write the film, so it's allowed.

RPF PREMIUM MEMBER
Man that looks great! I have a question thought, why did you mold and cast in resin if the print was already resin. Just curious!

I own a Weta Workshop original. View attachment 1448117 But then, I did co-write the film, so it's allowed.
Click to expand...

Thanks! Oh man I would love to get my hands on one

Sundowner said:
Man that looks great! I have a question thought, why did you mold and cast in resin if the print was already resin. Just curious!
Click to expand...

I'm moulding it so I can make a few extra

JudgeLalor said:
mate Stunning! How can I get my paws on this?
Click to expand...

Thanks! We'll give you a shout when it's ready. Still got a bit to do yet...

Will the model be available?

Thanks Sean! We'll give you a shout when it's ready

DaveChaos said:
Thanks! We'll give you a shout when it's ready. Still got a bit to do yet...
Click to expand...

seriously put me down for one please.

RPF PREMIUM MEMBER
This weeks progress, I finished the Grip and changed up the Pewter parts. 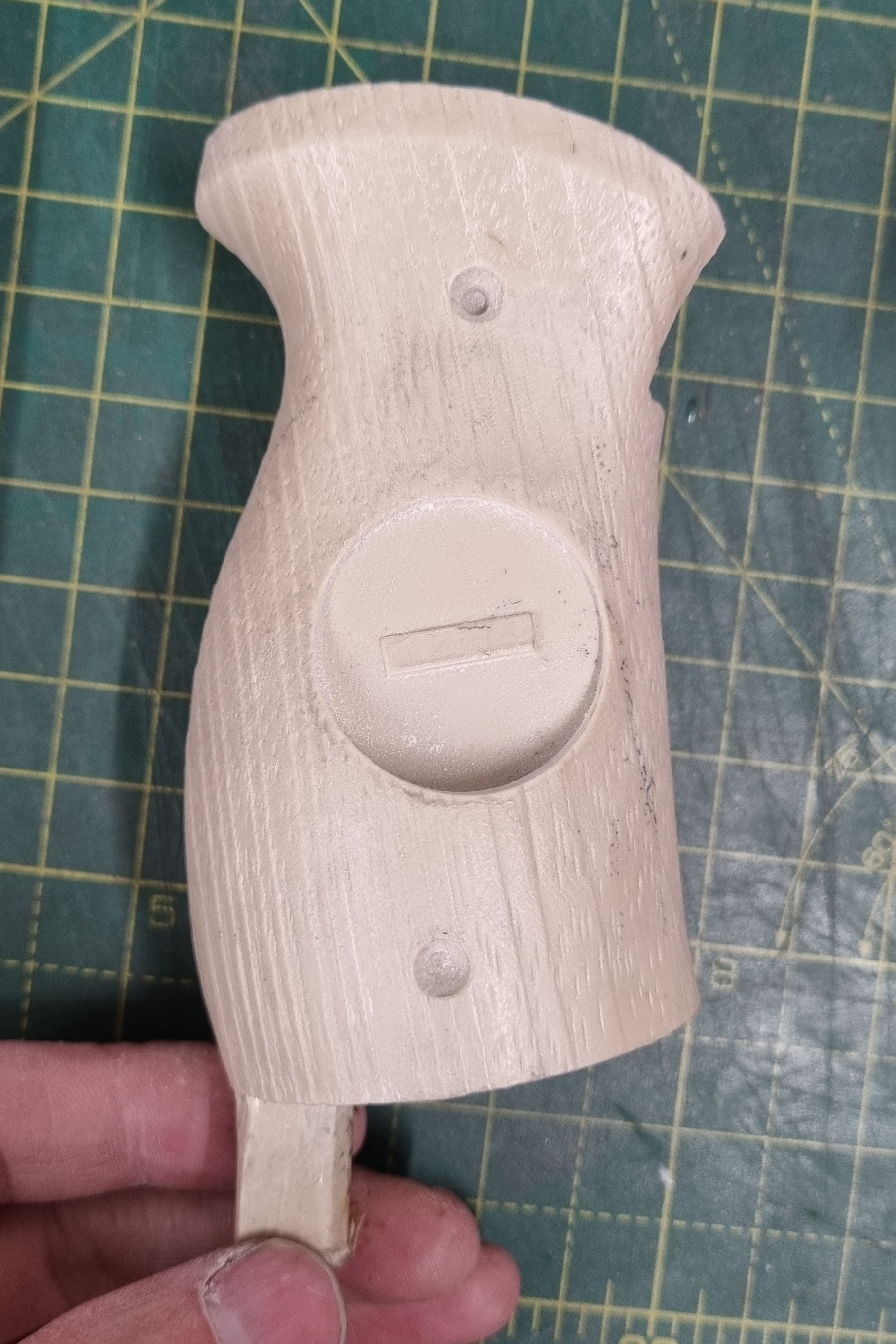 Quite happy with how it turned out, I added some Brown Pigment tot he resin but it wasn't nearly enough haha. I will add more next time to try and get a more Wood colourish.

Next up is the Pewter parts, I was originally thinking of simply 3D resin printing them but they have a somewhat heavy duty job and I think a 3D print will eventually break so I added them to the mould. 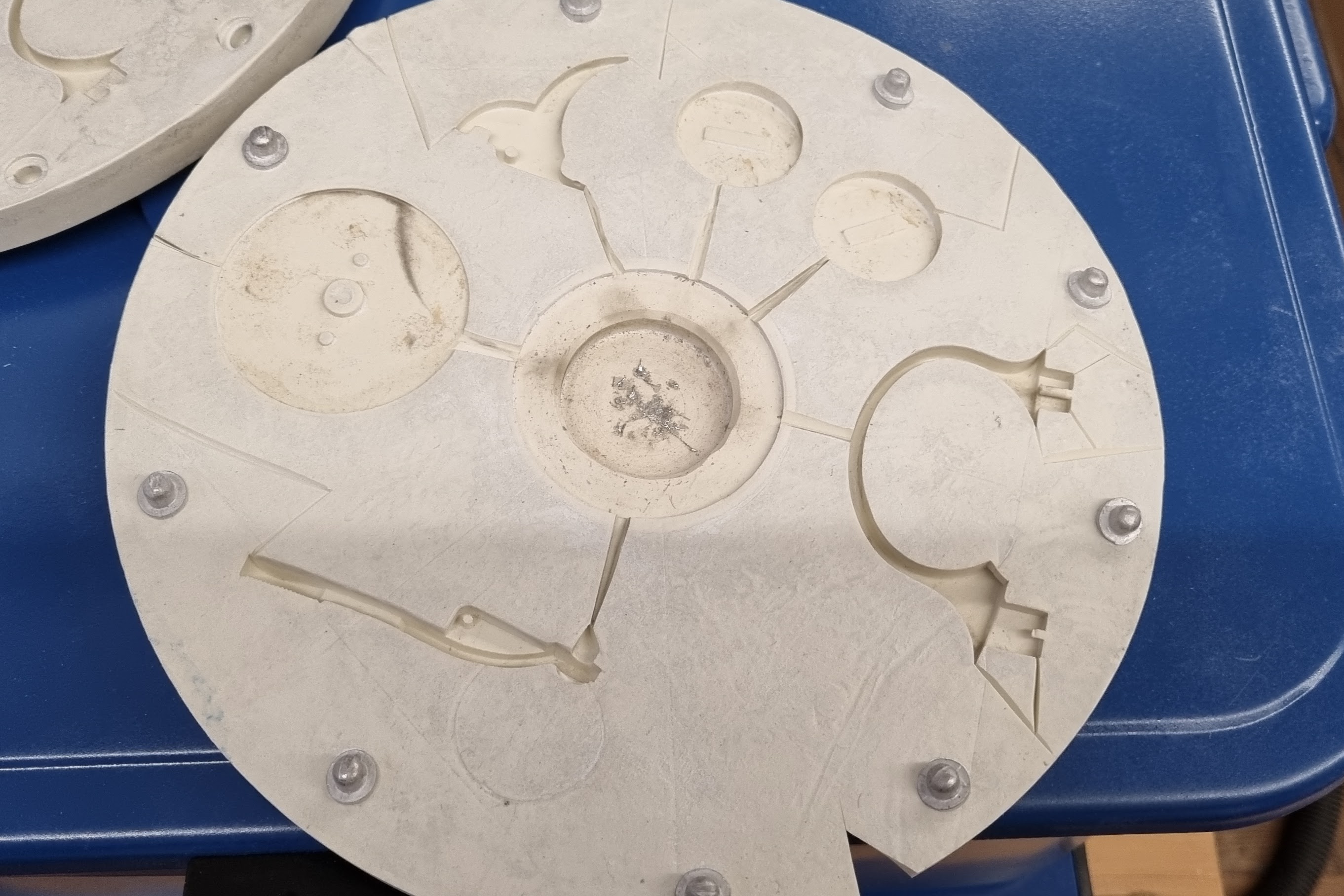 After this stage I just need to clean up the sprews and any flasing and move to polish. 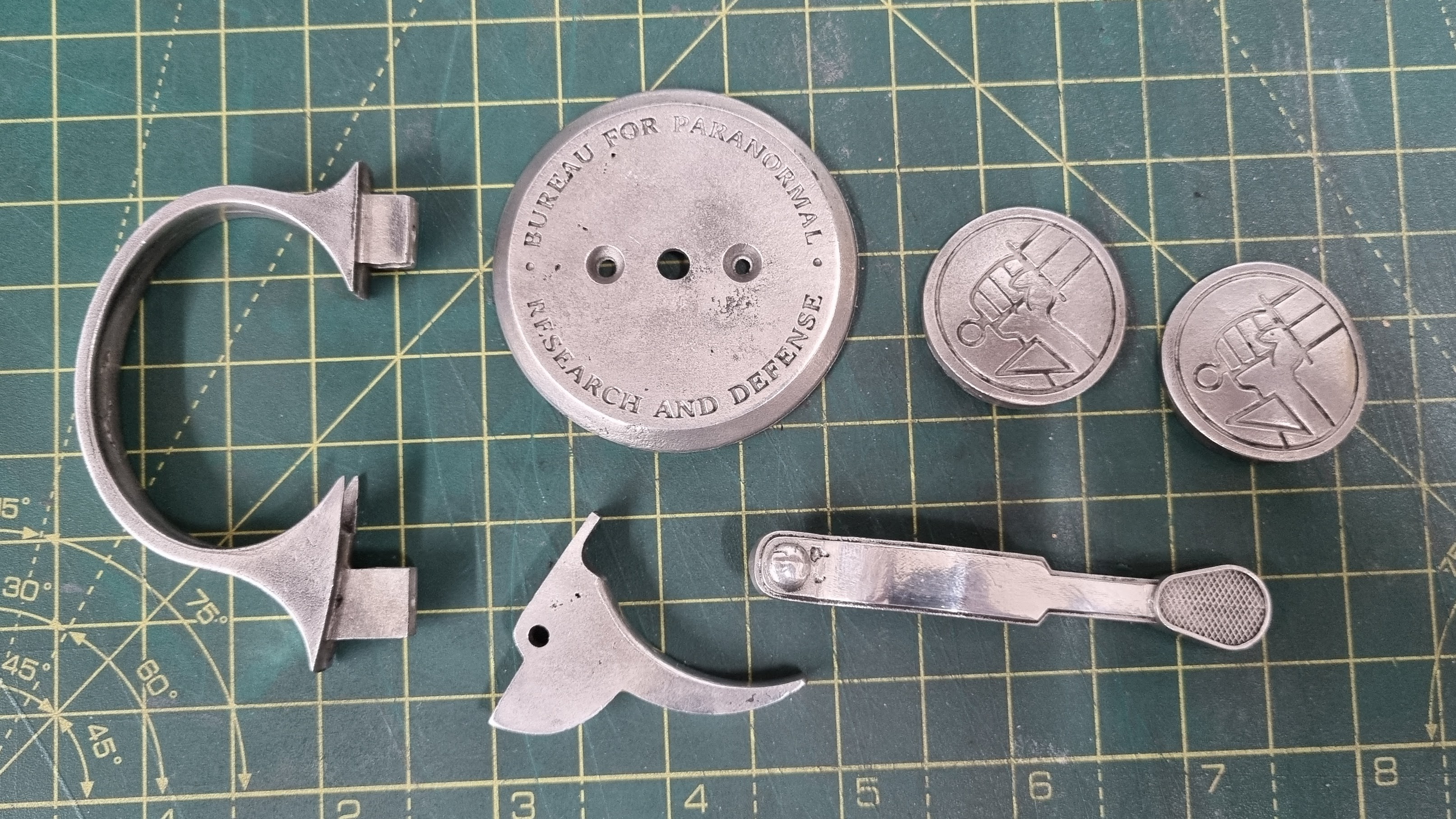 I want the Trigger, Trigger Guard and Release Catch to all remain shiny, but for the BPRD logos and grip plate I'm going to give them a Black patina.

Once I'm happy with the finish I can now buff the surface with some 0000 Wire Wool for the final finish.

This is a Raw Cast Vs Final thing comparison.

Thats all for this week, Next week I plan to tackle the remaining parts that need moulding

My god man that is stunning.

RPF PREMIUM MEMBER
Well I thought I was done for this week but then I remembered I had cast some of the Clear Bullets. 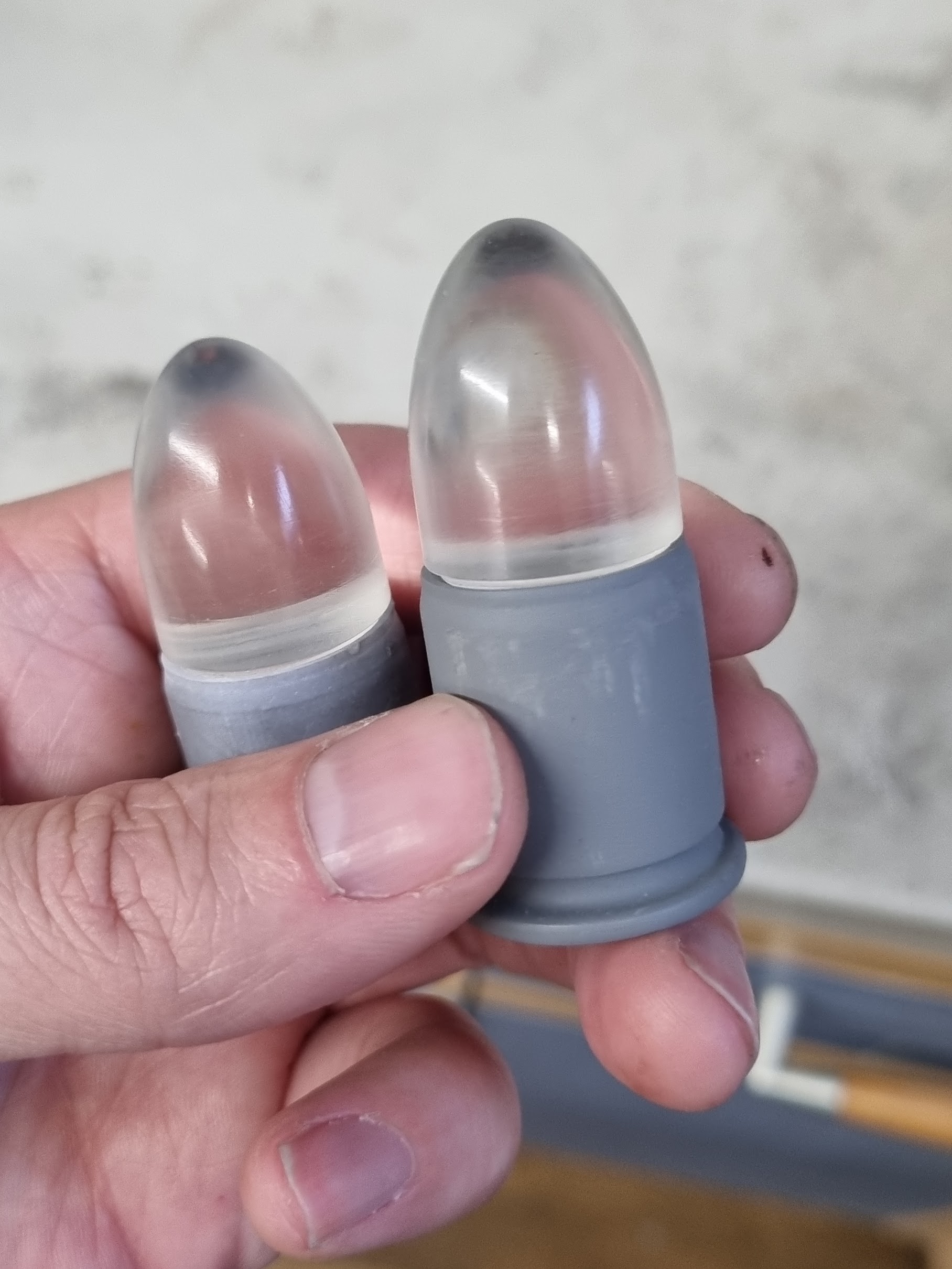 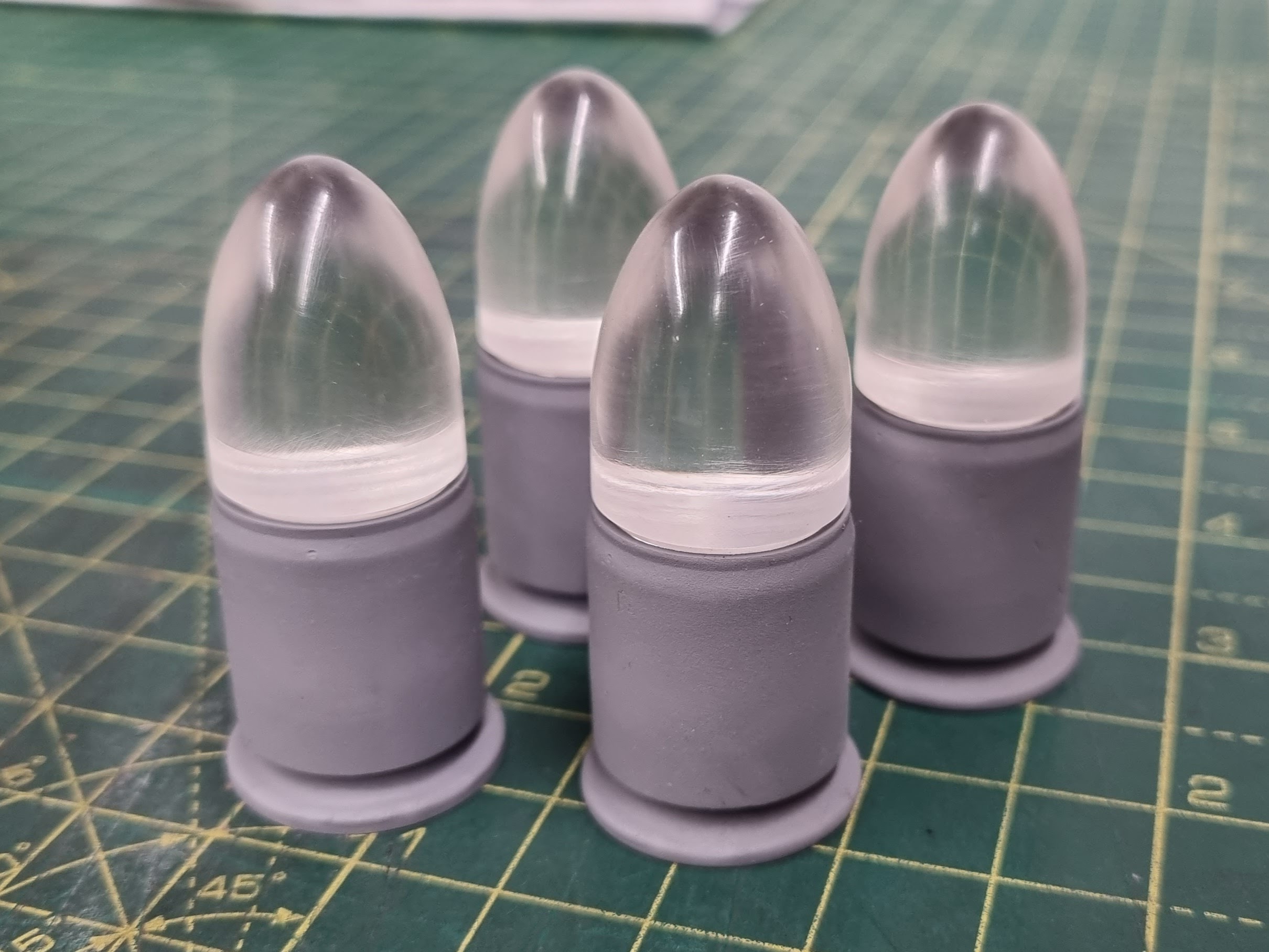 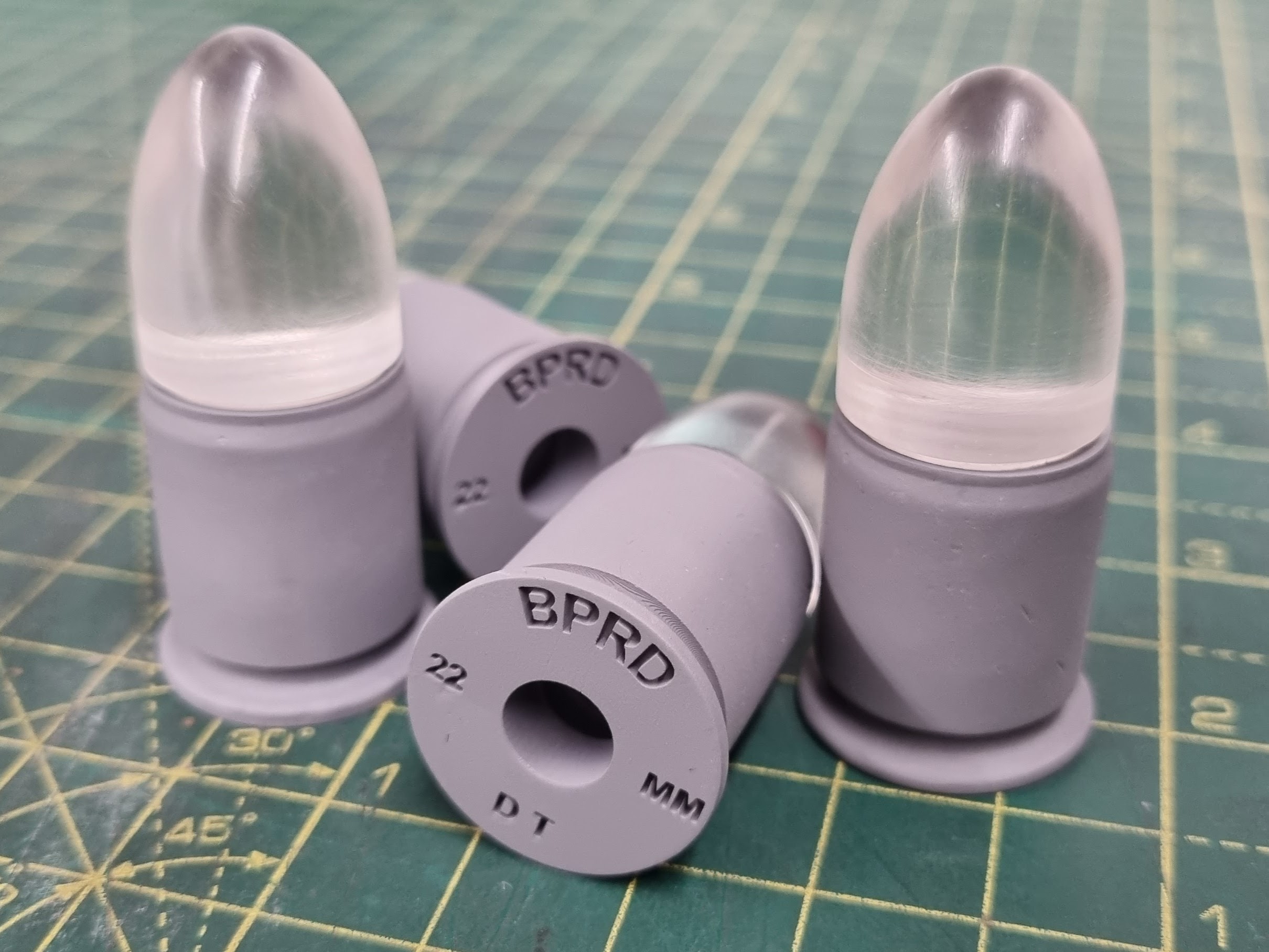 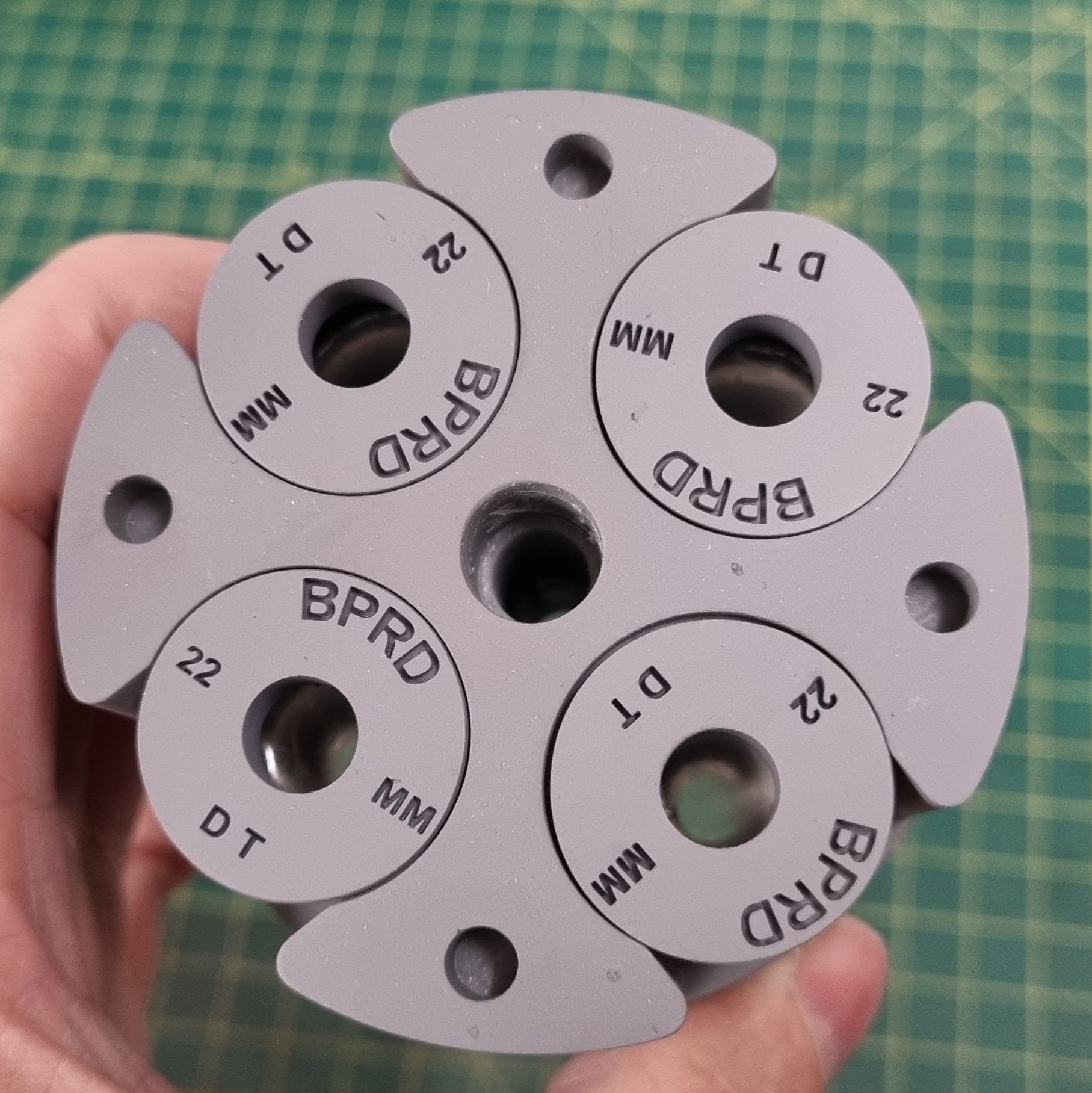 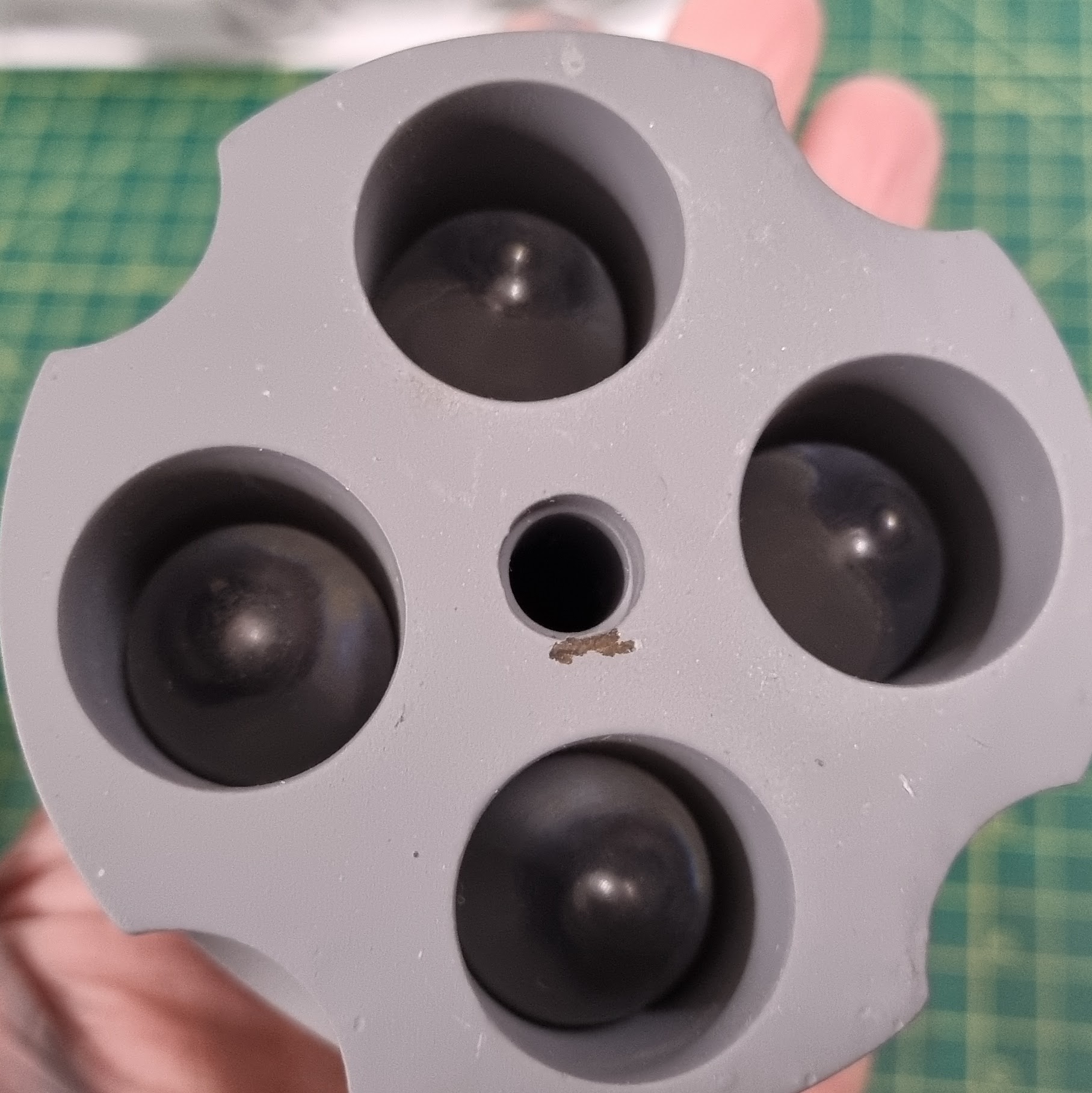 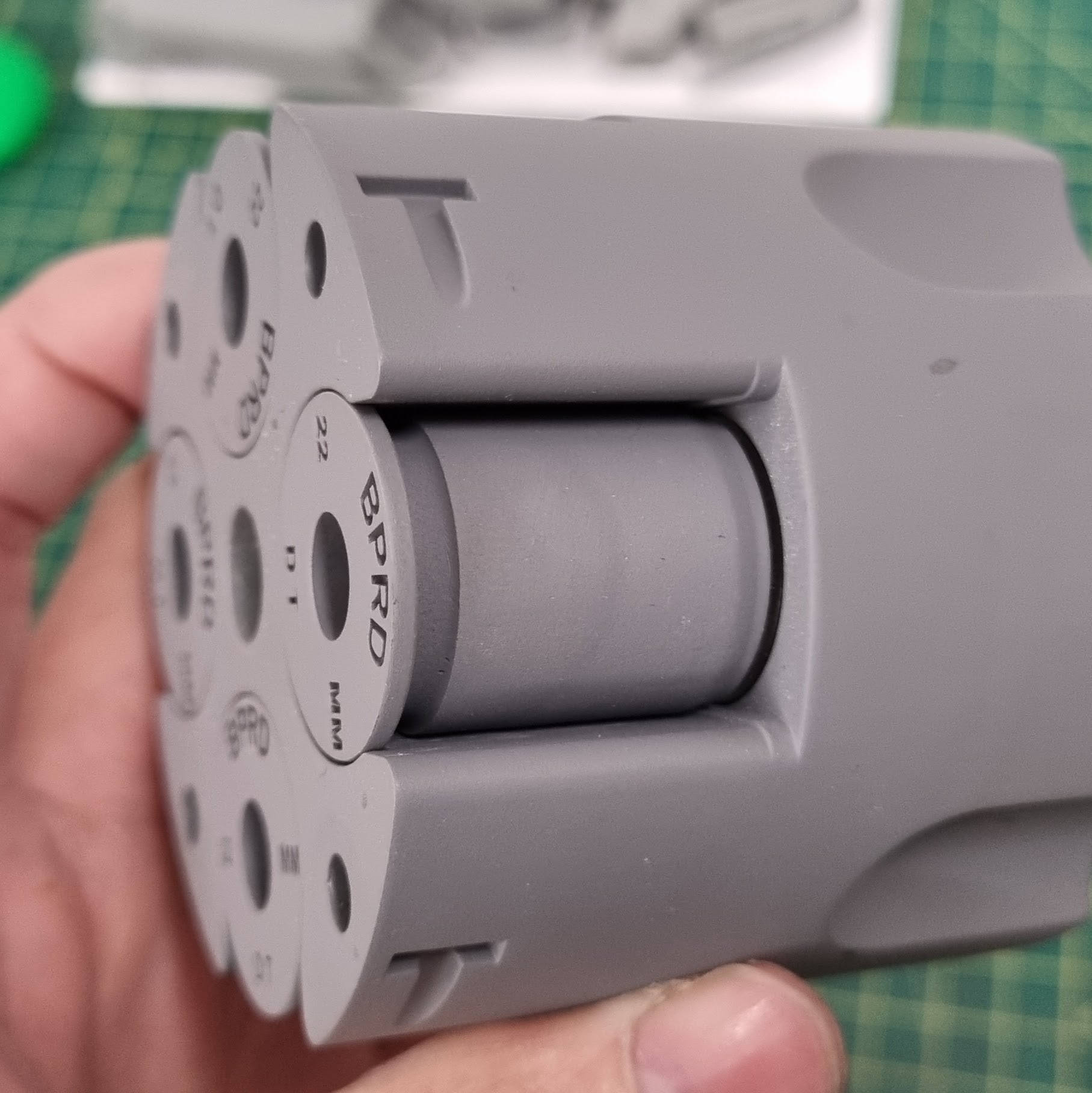 I do have electronics for the Green light but some of the parts are still on order, but as soon as they arrive I will get some pics of them lit up!

Yesterday at 6:02 AM
Paul FSebastian