I picked one of these up in the last week and it just arrived, so I thought I'd do a bit of a review.

I won't bother to take a pic of mine. No point really, since it looks just like all the other pics you've seen. Here's an example from the statue forum (Cap70): 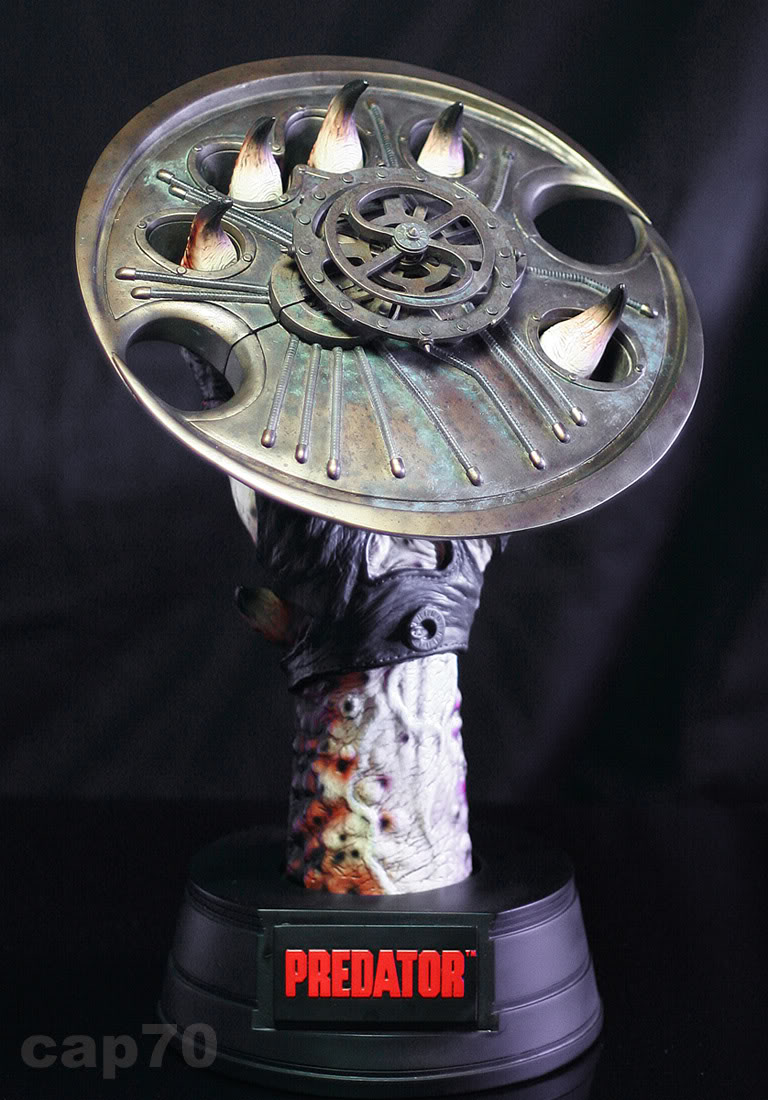 Mine looks pretty much identical to the one above, minus the purple, which I "believe" is from lighting and wasn't actually painted on the prototype. Could be wrong, though.

This doesn't seem to be a real sought after item, and I'm not sure why. Maybe because they're still readily available from several online sellers. Like I said, I wanted one from the beginning and can't explain my own procrastinating.

Some flack has been given on the hand display. I actually rather like it, and the casting is very clean. The little fingerprint whirls are even there. The veins, the wrinkles, they're all there.

The paintjob on the hand is as good as you'd expect. Factoryline stuff, but not bad. Seems like it should have had a satin clear coat on the flesh, and the glove could have used some dry brushing of a different color to better simulate leather, but oh well.

The disk itself has a couple of imperfections in the casting, little dings etc beneath the paintwork. Nothing major. I would have liked to have seen it shinier on the outside. Weathered, yes, but more polish showing through the weathering. It doesn't exactly open smoothly. Perhaps working it in will help. Don't know.

When in the closed position, the inner wheels are REALLY wobbly. In the opened position, this isn't the case. Just part of the way it's manufactored.

The inner sections are clear cast and then painted over except for the areas where the chasing lights are. There is some light bleeding through around the edges, but it is very minor. The chasing lights are a VERY cool feature. Ever since I saw P2, I wanted one of these. That feature alone makes this replica. Best seen in a dim room. Can't stress enough how cool this feature is. Check out some of the reviews on Youtube that show the lights in action and you'll see what I mean.

The thing is, how often are you going to take this down and play with it to see the light effect? Probably not often, so if you're considering getting this, that would be something to consider when weighing the pricetag. But it's nice to know the lights are there, the same way you know your bio helmet's targeting lights will work, even though you have it displayed high up on the wall.


No certificate of authenticity on this or behind the scenes pamphlet comes with this replica, but those things don't mean much to me anyway.

Is it worth it if you have to pay the full $399.95? Well, that's about what you'd pay for a couple of good, solid bio helmet kits, so for a finished piece, yeah, it's a solid investment and probably should be in any P2 fan's collection, and I am glad I picked one up before all the sources dried up.

GREAT review! I miss seeing people review kits and props like this! I've considered picking up a disc, but I guess it's on the low end of props that I've got my eye on. Its cool that it opens and closes, but it should be smooooth. After paying that much money I'd want it to be smooth so that I don't have to worry about parts breaking. Again great review!!

Cool review, I got mine just over a year ago! Like many others I always wanted a light up version like the movie so this was a must for me. I got mine for like half the rrp due to it being labelled damaged from a company so I emailed them and they sent pics of the damage which was literally nothing, a scratch of paint!!! Everything else was perfect! So I snapped it up! Pretty lucky I guess as I wouldn't been hesitant on paying full price!

Congrats on the purchase!

I just got this last month for $280, it is a awesome piece and the light up effects are super cool. I would defn recommend it. None of the Predator prop replicas have really been in huge demand, I don't understand it either. Even the MR spear, sold out for all this time, can be had for super cheap if you find a good deal, I got one of those a couple months ago for $200 as well, and it's awesome too. I can understand the AVP props not selling so well, but not these. I think the price tag of $400 on this prolly would've sold better at $300. It also hurts that as a company, HCG isn't known for putting out the best in quality and paint.

Those are some great prices you guys got them for. If I'd seen one for that cheap, I'd have been on this one much sooner.

I prepaid back in the day for that MR spear because I HAD to have it, and it was strange to me that it just didn't hold its value.

I did do a "or best offer" on Ebay for one of these disks, and threw out what I thought was a reasonable price for a previously displayed, and therefore "used, one, and no go. I ended up paying less for a new one. Went through an online vedor, got a little off the retail price, plus got free shipping. Free shipping alone is worth something when you consider the huge box it ships in.

Another electronic prop I highly recommend is the MR Thermal detonator. The lights and authentic sound effects are awesome. And again, for whatever reason there was little demand for them, and they still pop up for not much, if any, of an increase, even though they are long out of production.
You must log in or register to reply here.
Share:
Facebook Twitter Reddit Pinterest Tumblr WhatsApp Email Link
Top