Has anyone un-yellowed Stormtrooper armor?

My trooper armor has taken on some yellowing while on display. I wanted to know if anyone else has had success.

has anyone done this:
Peroxide Method
You Will Need:
Steps to Whiten the Plastic:

A few years back I had some success using this method except I used the gel method because it was for a large electronic R2. Ultimately it did work but it took many applications.

Anyone use this product?

RPF PREMIUM MEMBER
I've no direct experience, although this chap has, using the Trooperbay product.

Your Retr0Bright gel link appears to be dead, but the original Retr0Bright website does have the recipe.

Finally, YouTube has a lot of videos about whitening plastic, including discussion on best recipies, the effects of UV vs heat etc.

I've done retr0brighting of plastic parts of old computer equipment. They had got yellow from bromine-ions (added for its flame-retardant properties) together with sunlight. Plastic without these flame-retardants don't yellow as much.
Retr0brighting is not bleaching: it is reacting with the bromine at the surface of the plastic. If you overdo it, then it will start bleaching which usually shows itself as white streaks — which you don't want.
UV light and heat each works on its own, but is better together. I've seen a sous-vide heater/circulator being used to keep the temperature over time.

I am unsure of how good Oxy Clean actually is. It contains TAED which should make hydrogen peroxide work better as a bleach at a lower temperature. On the other hand, Oxy Clean foams. I think most people omit this.

While computer equipment often has a coarse texture... for slick glossy plastic there is another method: ablation. Use fine sandpaper to remove the thin yellowed surface layer and then polishing compound to get it shiny again.
This method was recommended by collectors of old telephones, and I've used it on a vintage Ericofon. But it is of course labour-intensive and vintage phone enclosures are made from a thicker and harder plastic than armour tends to be.

... or ... You could convert your Stormtrooper into a Sandtrooper

Like I said, I have had some success in the past with an electronic R2:

Hi all. I have an Interactive R2D2 and the body and legs have yellowed over time. I've read a few things around the net about solutions to correct it. However I am concerned about which method is the safest for this particular item as it is large and has other painted details that I do not...

I think I would have had better result if I left it out in the sun longer but I was thinking that once it dried, it stoped working, but that might be untrue.

The other thing is that the mix I used was very easy to do but not sure if it was as effective as the previous listed method.

I got an experiment going on today. I wanted to try the wet paper towel method. I got one of the pieces out in the sun now. The problem is that here in Florida, we have been getting afternoon showers every day. So I may one have a few hours of sunlight. But maybe it is enough to see if it works.

I couldn't tell you one way or another. A few years ago I watched a video where someone restored some old yellowed toys. It was pretty interesting, and the result was that it looked brand new. Alternatively you could paint the armor white.

I went ahead an bought the Trooperbay product. Because it did not require any mixture as you see online.

However I watched another couple videos where they simply used the 40 Volume of Salon Care you can get at the beauty supply store and simply brush it ion and put it in a bag and wrap in plastic and put in the Sun or UV light. So I am kind of thinking the Trooperbay stuff might be the samestuff just repackaged. I'd like to think he might have added something more to it to make it better. We will see.

The 40 Volume of Salon Care is what I used in the past but I mixed it with the oxy clean. Not sure why that is important as it seems to work without it. But in the past, I was not told to wrap it in clear plastic. The plastic supposed to help keep the cream from drying out. For instance, i saw a guy in a video able to put the item out on two different days and not have to re-apply the cream. Where as when i did it prior and not wrapped in plastic, it dried out right away and I was not sure is the mixture still worked and I found myself re-applying a few times in one day with slow results. 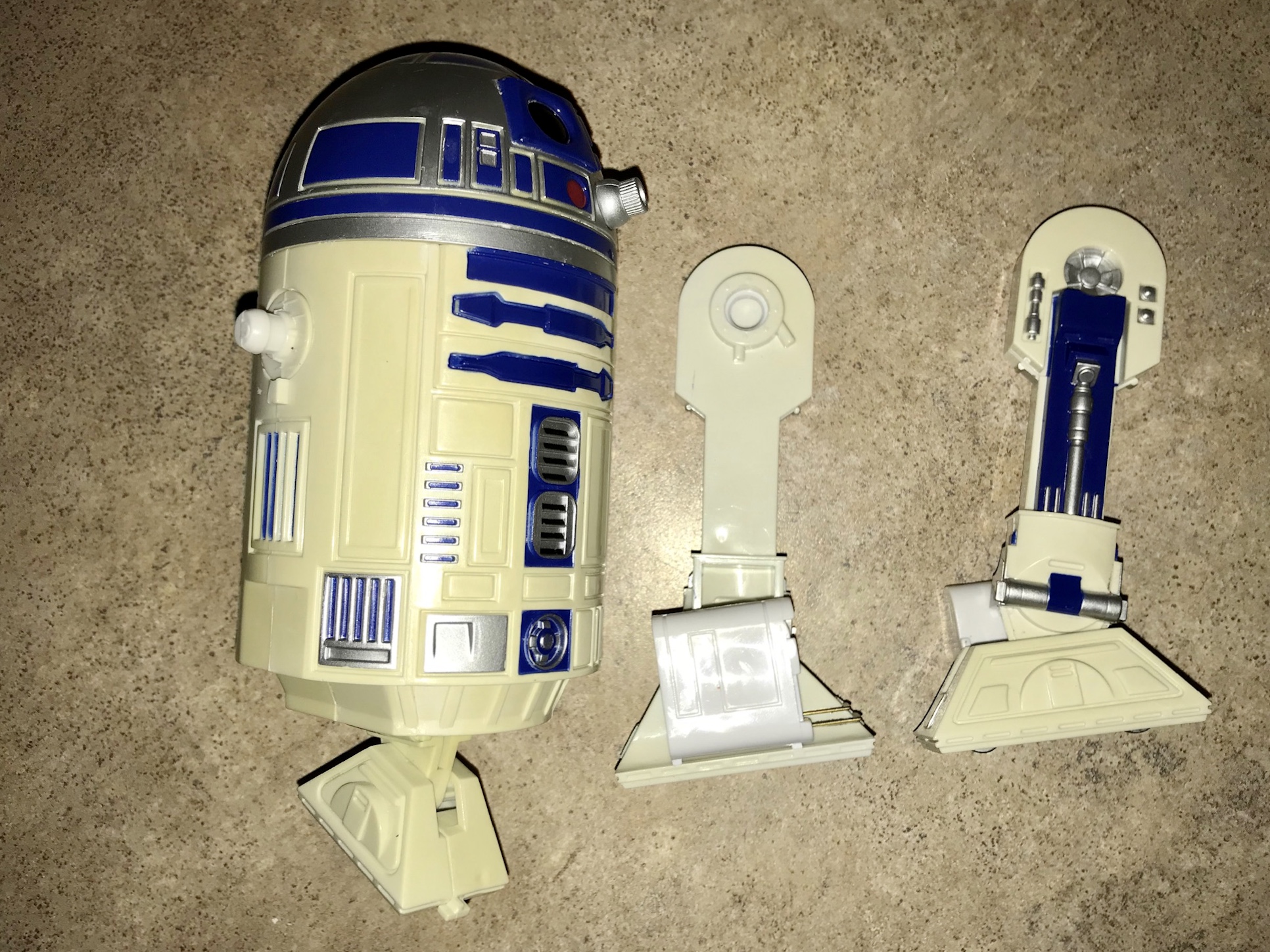 if you see the bottom section of the inside leg, you will see the color the white is suppose to be. Oddly enough, that little section is a different kind of plastic as it is not prone to the yellowing. 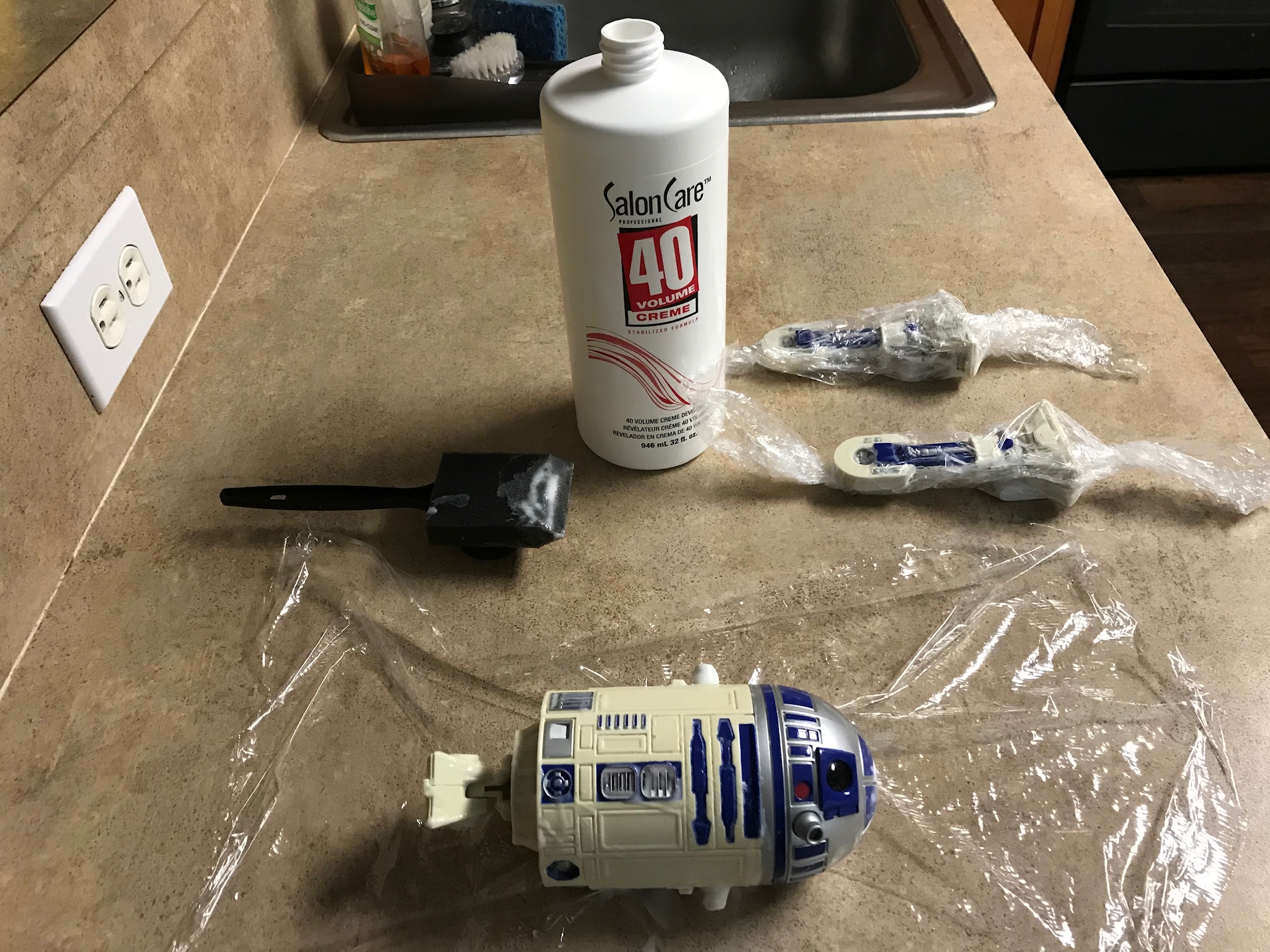 The problem is that here in Florida, it’s been day after day of thunderstorm. Not much sun. So it might be a while till I get results. 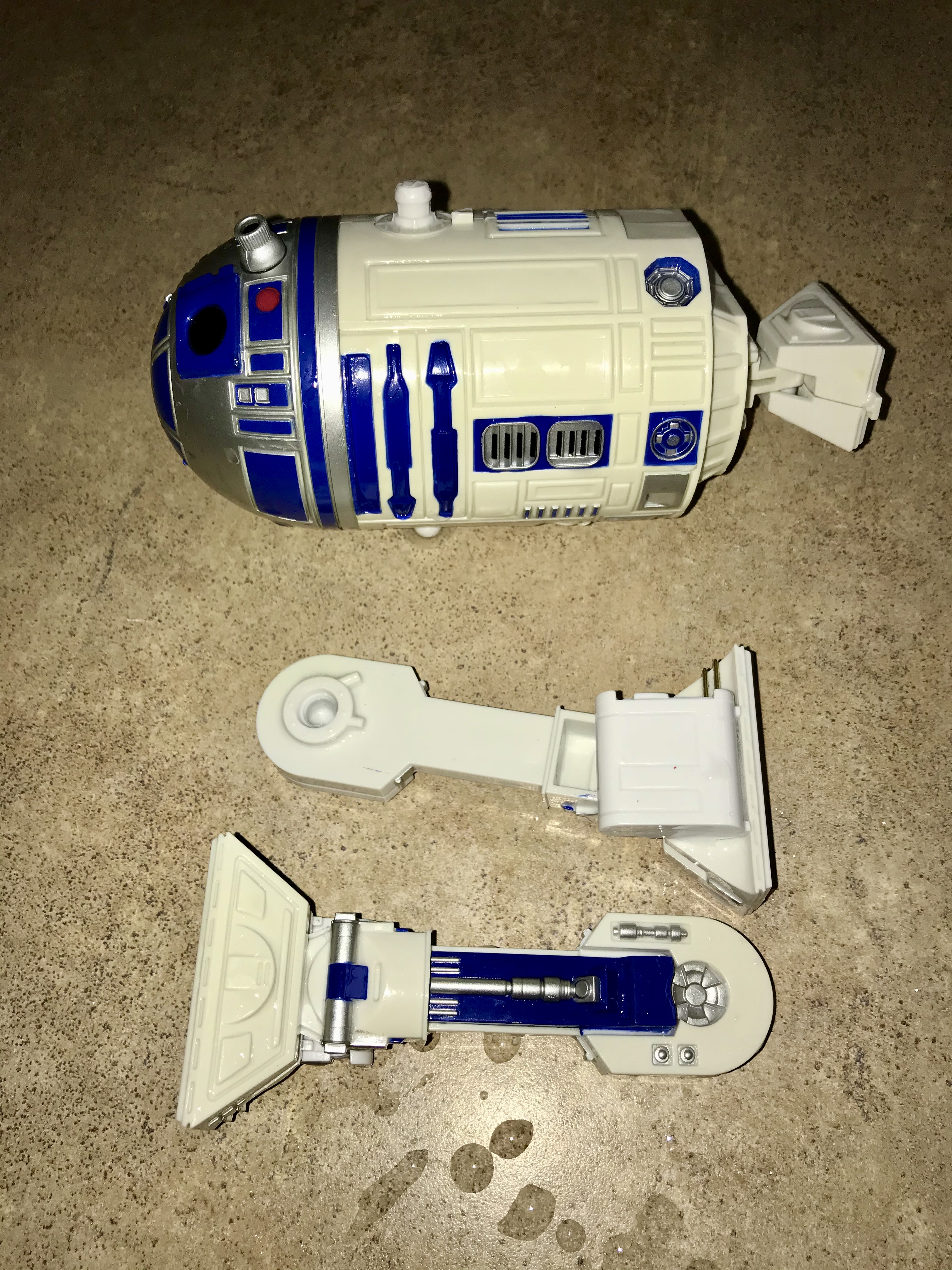 Some progress. Looks better in person. I'd say this have been about 8 to 10 hours of daylight exposure. However this daylight has been overcast. They say it's UV light that makes this work so I know that UV light is still very prominent even on cloudy/overcast days. I rinsed and reapplied the creme. We will see what happens next.

I found a brand new 18" black light at my Goodwill for $5. According to my research, a blacklight generates UV rays. So I may experiment with that as well overnight. The youtube videos show methods using this blacklight/UV light method.

The rain came again so I moved the experiment inside an I am trying the lamp. I made a little tin foil tent to make the most of the UV from the single bulb. 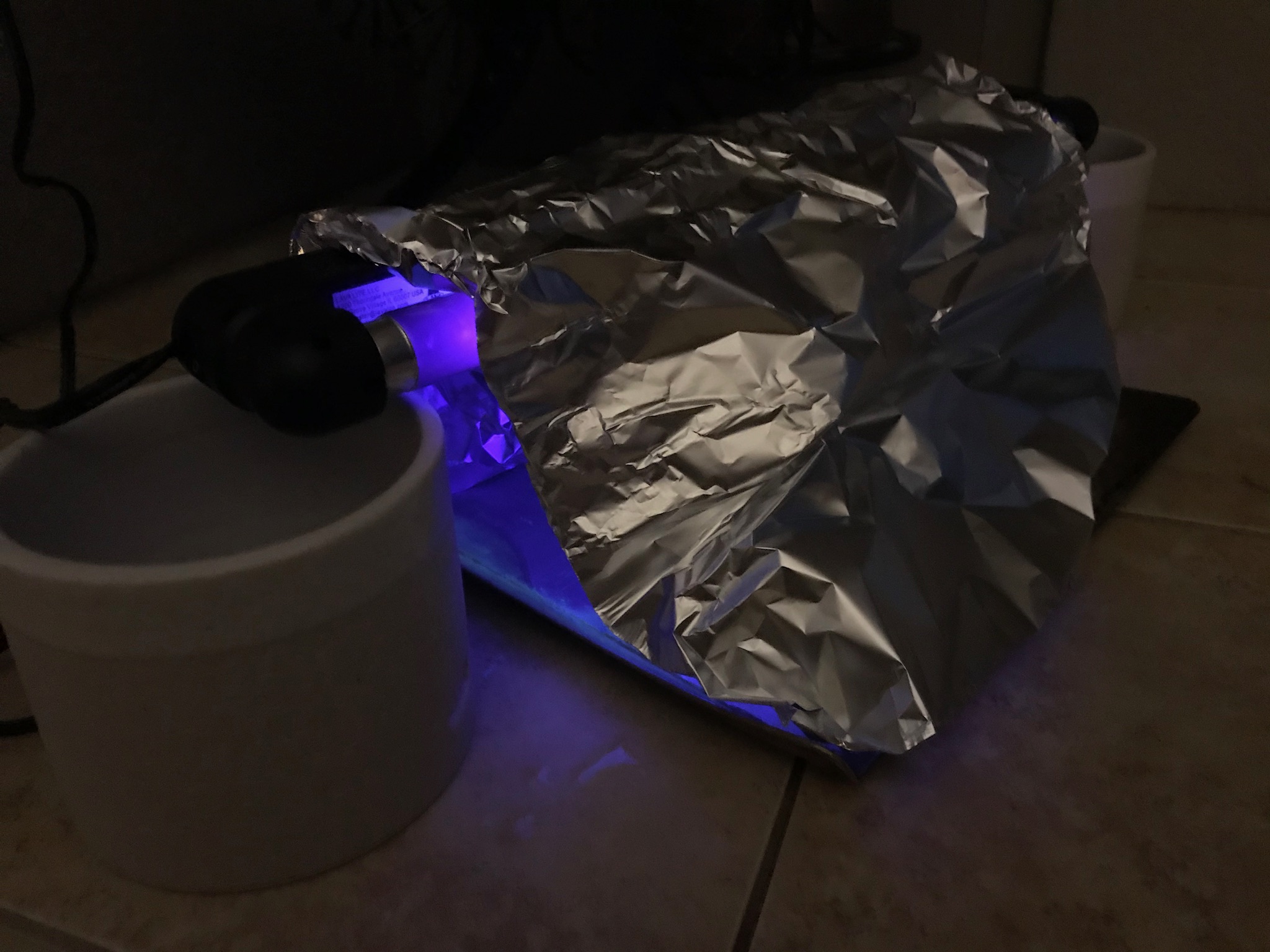 I’m calling R2 complete. This is the 1:6 scale from Hasbro that was released in the late 1990s. I probably had him exposed to UV (natural and artificial) light for a total of 24 hours. Not sure if it needed to be the long but I did it anyway. 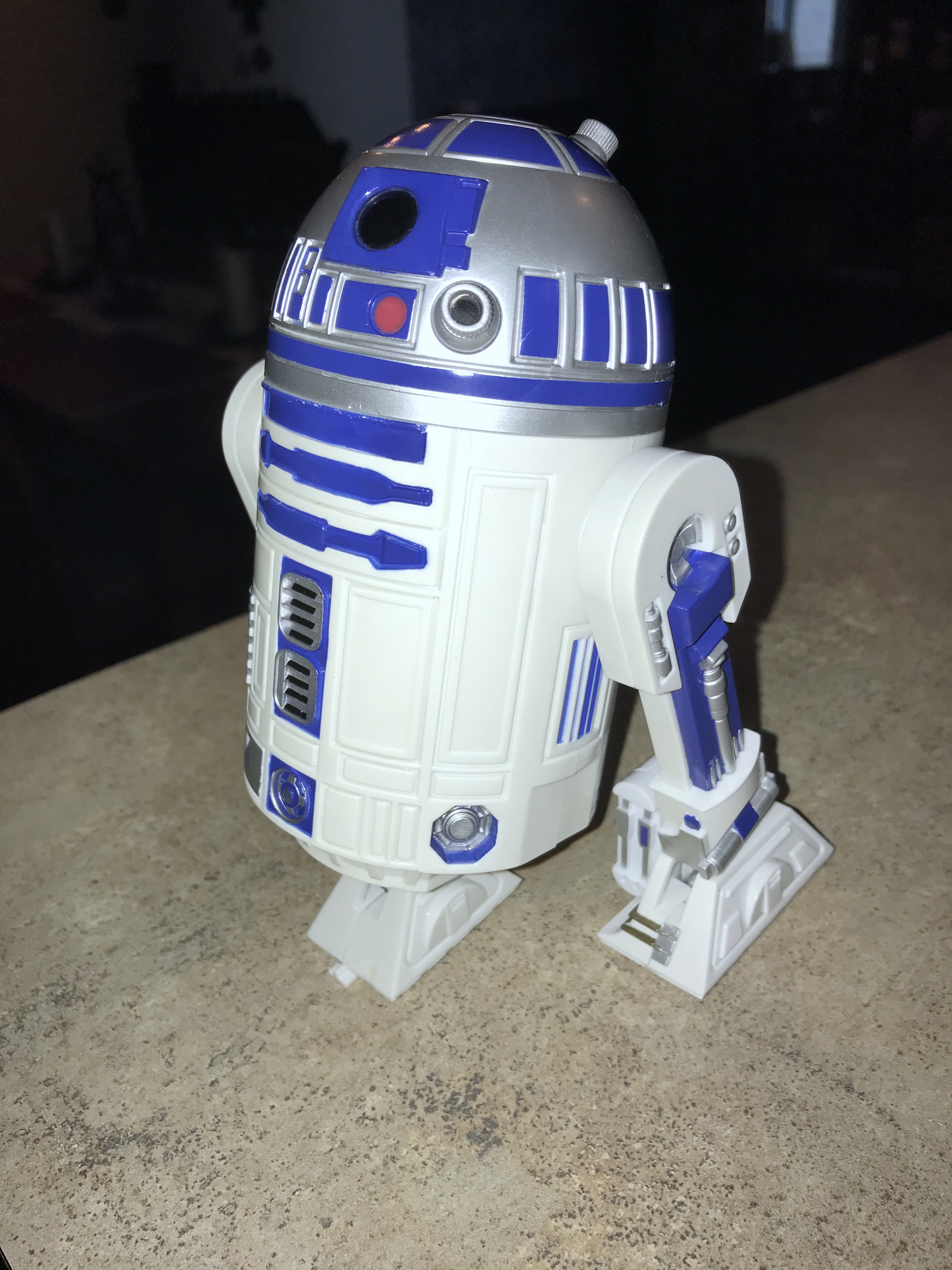 Next up is a piece of my ST armor. 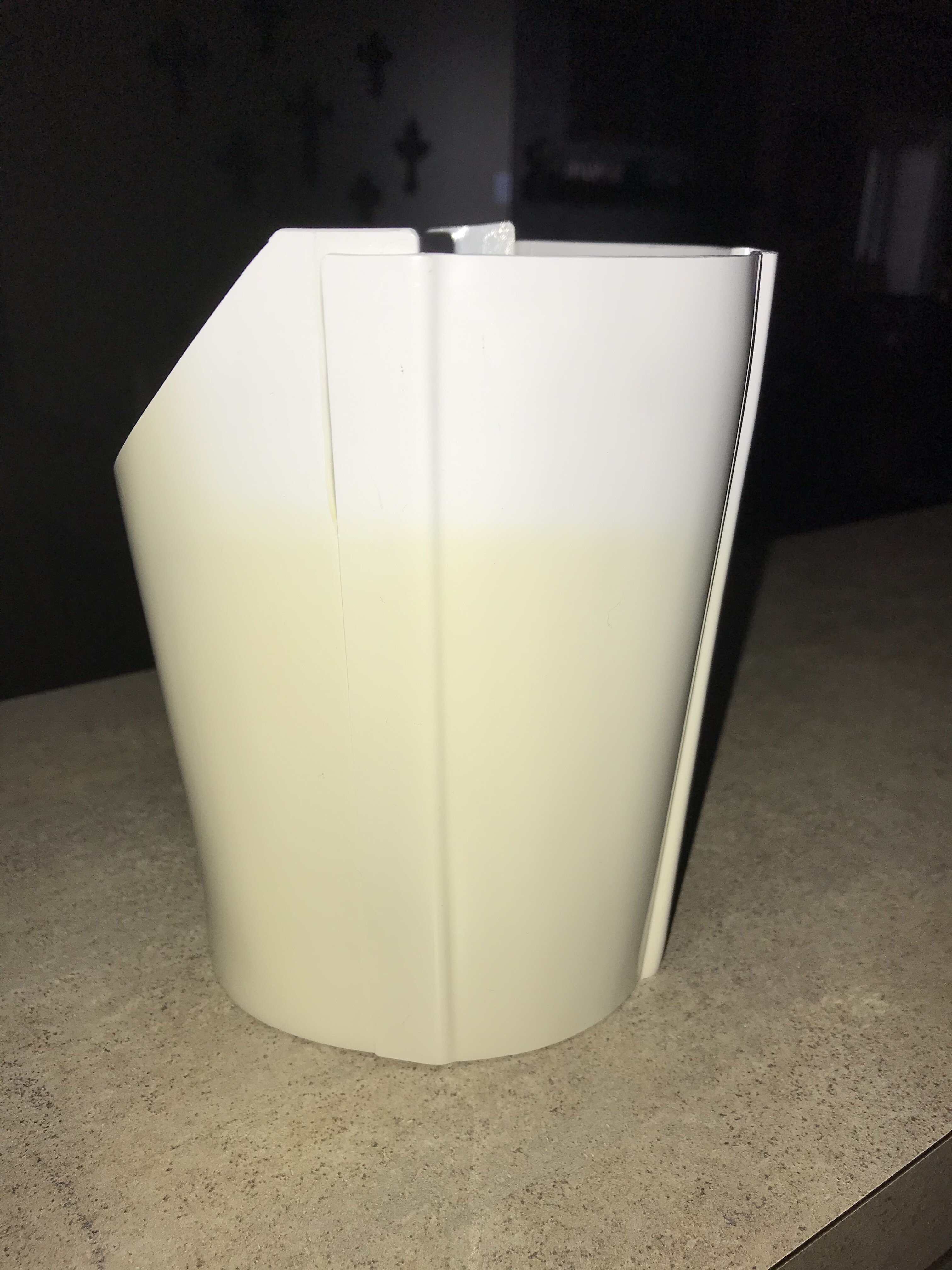 Mara Jade's Father said:
I’m calling R2 complete. This is the 1:6 scale from Hasbro that was released in the late 1990s. I probably had him exposed to UV (natural and artificial) light for a total of 24 hours. Not sure if it needed to be the long but I did it anyway.


Next up is a piece of my ST armor.

I'd say that worked pretty well!

after a few hours the piece of trooper armor is almost done. There is a slight tinge of yellow in. A spot. If you weren’t looking for it, you wouldn’t notice. I am keeping it under the uv lamp for the night.

I think I could get all the armor done in a day if I could just get a good non-rain day but I don’t know when that might be. I want to just lay the armor in the lawn and plaster the cream all over. If I could get 6 to 12 hours of uv exposure, I think it would be good.
Last edited: Aug 25, 2020

after a few hours the piece of trooper armor is almost done. There is a slight tinge of yellow in. A spot. If you weren’t looking for it, you wouldn’t notice. I am keeping it under the uv lamp for the night.

I think I could get all the armor done in a day if I could just get a good on-rain day but I don’t know when that might be. I want to just lay the armor in the lawn and plaster the cream all over. If I could get 6 to 12 hours of uv exposure, I think it would be good.
Click to expand...

Here are the result. 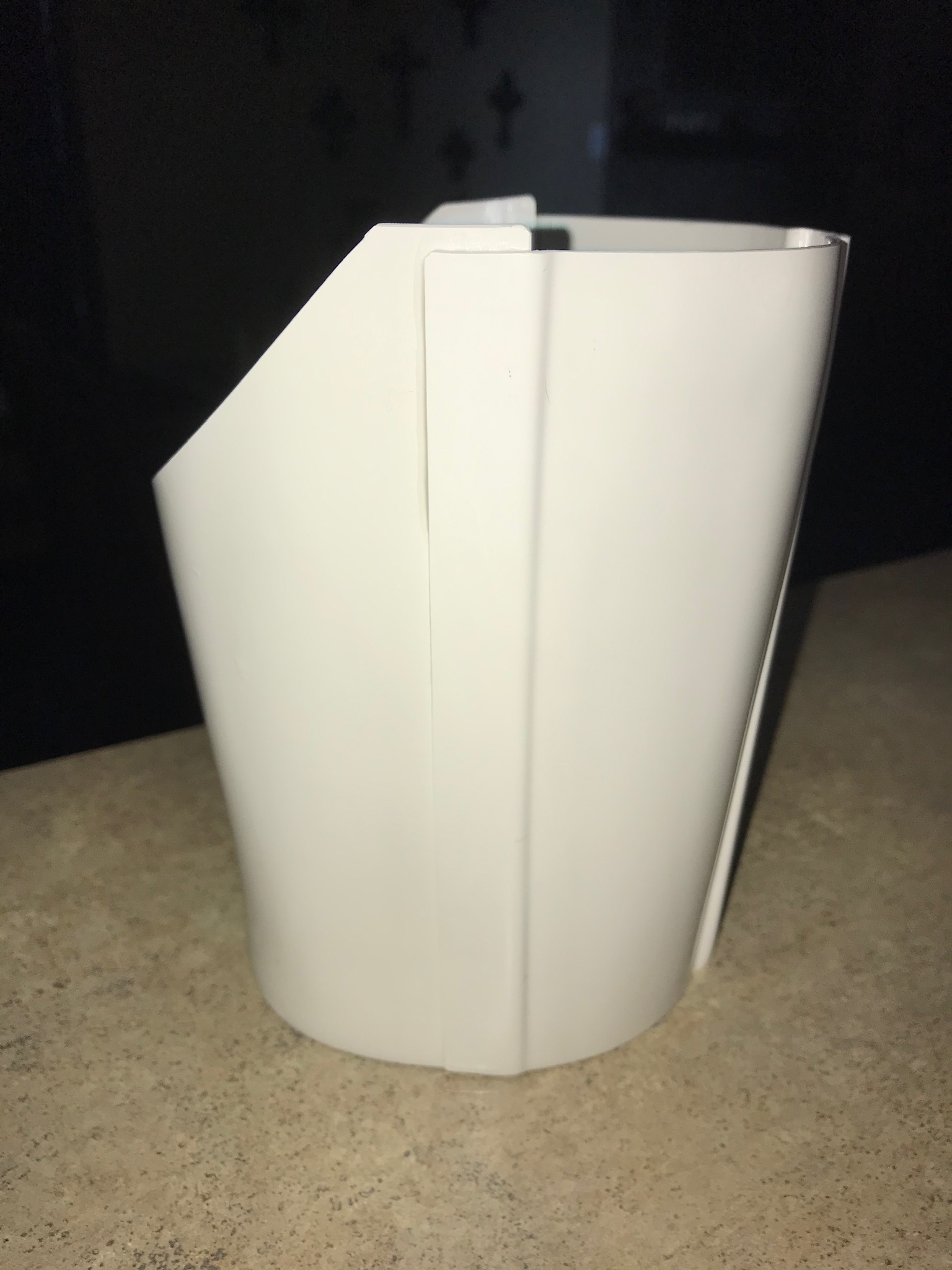 The 40 Volume is 32oz for $5 at Sally’s Beauty Supply. They has smaller and larger sizes. I am going to have more than enough for my armor.

Right now I am doing the small parts because I have small clear plastic bags to put them in and set in the yard. This way if we get a small rain shower, I don’t have to worry about it washing the cream off.

No rain on the forecast today.

I have all the rest of the affected armor in my backyard. Since these are bigger pieces, I don't have clear plastic large enough to cover the pieces and don’t want to waste cling wrap. Not sure how fast it will dry out or if that even affects the process. I will keep an eye out and might reappply. I am hoping this will be it so I can put the armor back on the mannequin but I need to move it away from the window or this will happen again.

A big improvement in just the first hour. The back piece of armor was mostly yellow except for the area when the belt covered. The noticeable line is gone. there may still be yellowing but the obvious aspect of the coloring seems to be gone.

And I still have a lot of the 40 volume cream left.

So the good news it that if you have yellow armor or toys, you can clean them up with $5 or yes of product and some time. The bad news for me is that the Trooperbay stuff I have on the way was an unnecessary purchase.

Mara Jade's Father This is awesome to know! I've got a pretty aged set of Biker Scout armor I'm rebuilding, and i was dreading having to wetsand the whole thing!

Cbstudios said:
Mara Jade's Father This is awesome to know! I've got a pretty aged set of Biker Scout armor I'm rebuilding, and i was dreading having to wetsand the whole thing!
Click to expand...

I am glad this helped someone. Make sure you wear gloves.

Like I said at the beginning of the post, I had done some de-yellowing in the past but I used a mixture of various products. But it was for a much smaller item and the mixing was PITA.

Since the armor is so much bigger and I did not know how much I would need for reapplications, I really did not want to have to mix stuff once or twice a day. So my goal was to look for the easiest solution possible.

By the way, if you have any black scuffs you need to clean off first, Magic Eraser worked great.