Harry Potter portfolio gift and thanks to everyone here

Hi all, I just wanted to share a gift I just made for one of my neighbors kids.

Her daughter was being bullied this year at school and was just having a generally crappy time. Dreading school, missing classes, taking different routes to walk, etc. She didn't do anything wrong, just elementary school jerks not treating her properly for the silliest things. School was informed and her parents are guiding her well and she's done better as of late.

So initially, I was just going to print a Hogwarts acceptance letter with her name on it and call it done. One thing led to another and this is what we have.

Firstly, thanks to the awesome and talented makers on the RPF especially those on the paper props forums who have given their time to create and recreate art and props from the films. As a graphic designer and illustrator, I know and understand the effort required to make these things and the integrity to share their work with others.

I made her acceptance letter, and I also printed the the Ministry of Magic letter, along with the supplies list. I went through the paper props list and just picked out some random things I thought she'd like and printed them, then I decided it would be cool to put them in a portfolio. I had one I got many years ago and never used, so I modified a big envelope and glued it inside to hold everything.

I typed up a personalized letter from Hagrid, saying congrats on being enrolled at Hogwarts and that he had collected a bunch of things that students gave him, and he was passing them along to her.

I customized and weather the portfolio, did it up all nice. I picked up one of those wax seal Hogwarts stamps off Amazon, but to save time I just used a hot glue gun and painted the finished "seals" for the letter and portfolio.

I was going to make the Marauders map, but I wasn't able to get a good quality oversize print in time. I know I could cut and paste a bunch together, but I decided what the heck and made some simple wands instead. Just some wood dowel, some coat rack pegs, glue and Dremel-fu and some paint. Presto, wands! I decided to make a second one for her little brother who I know wouldn't want to be left out of all the fun (he likes the movies so why not).

Lastly, i thought the wands needed some "Wow" so I made some boxes and weathered them. I cheated a bit and made the lower box out of foamcore as I ran out of card stock but overall I was happy with the results. I wrapped everything in brown paper and tied it all up with string to make it looked like everything walked out of Diagon Alley!

I hope the little girl likes everything, she is getting her gifts tomorrow.

Thanks again RPF paper props makers for putting a little smile on a girl who certainly deserves it! Now onto some pics. 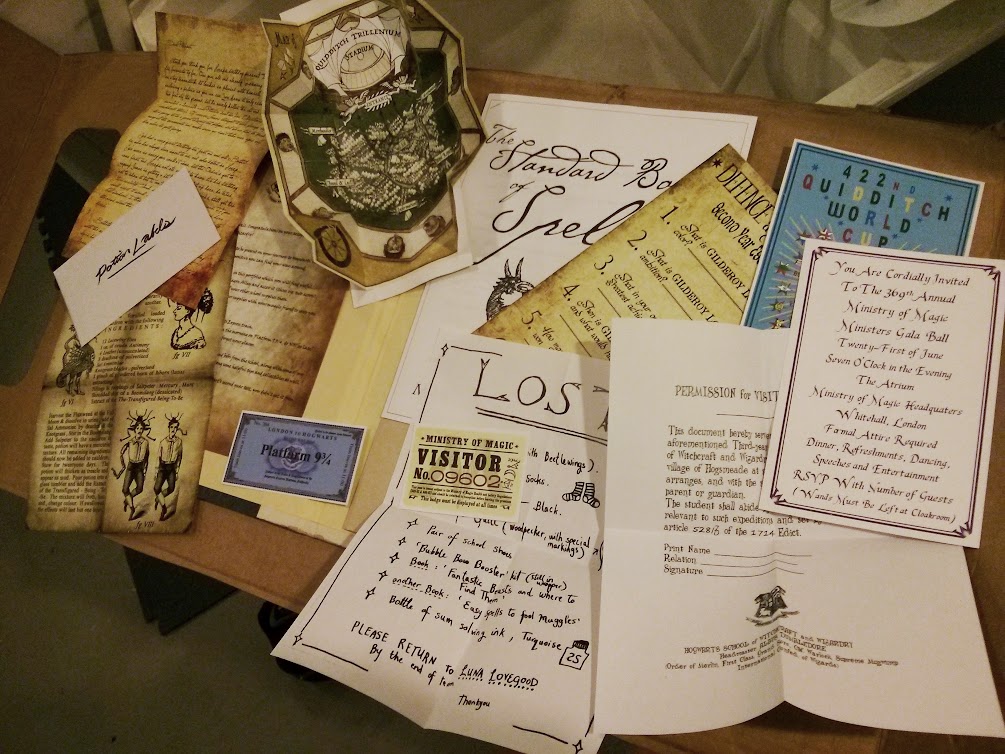 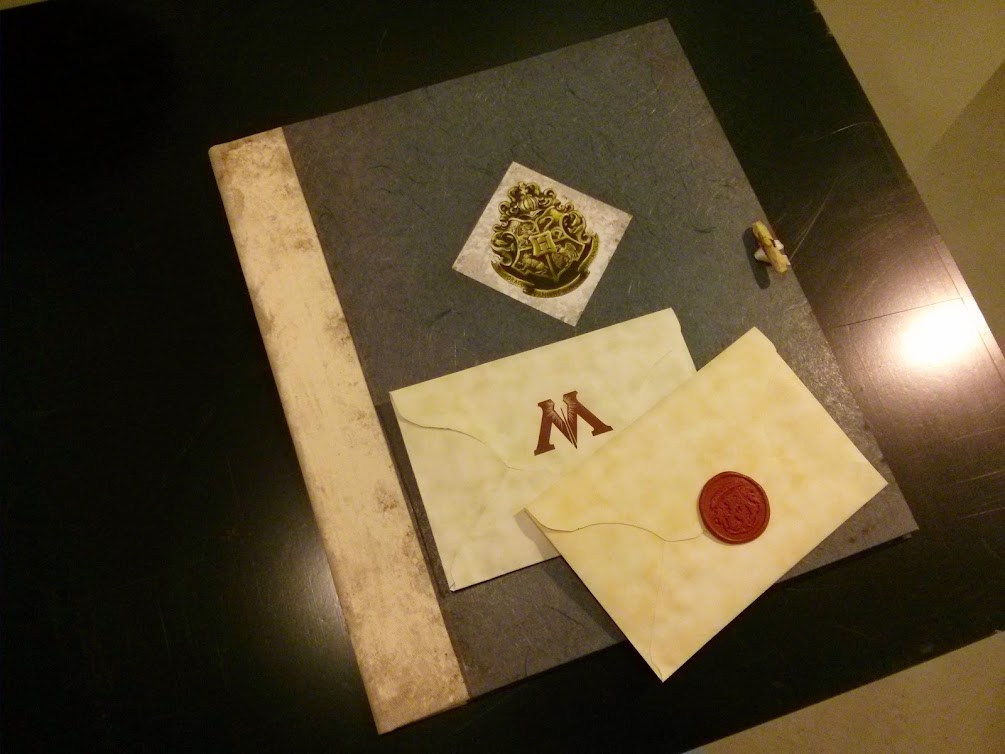 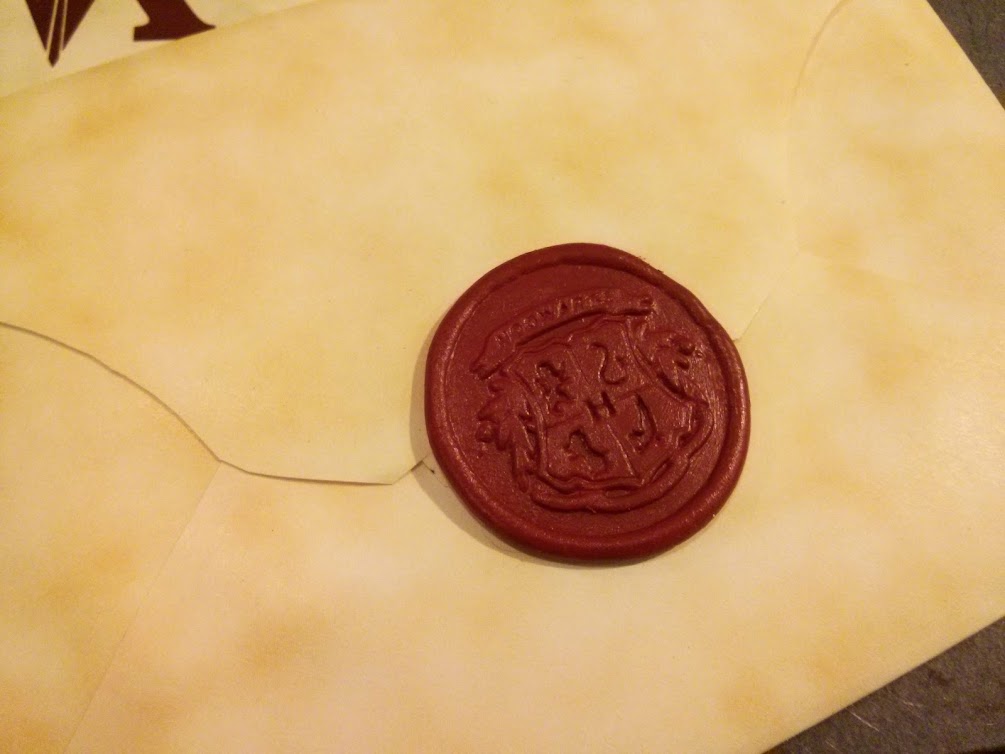 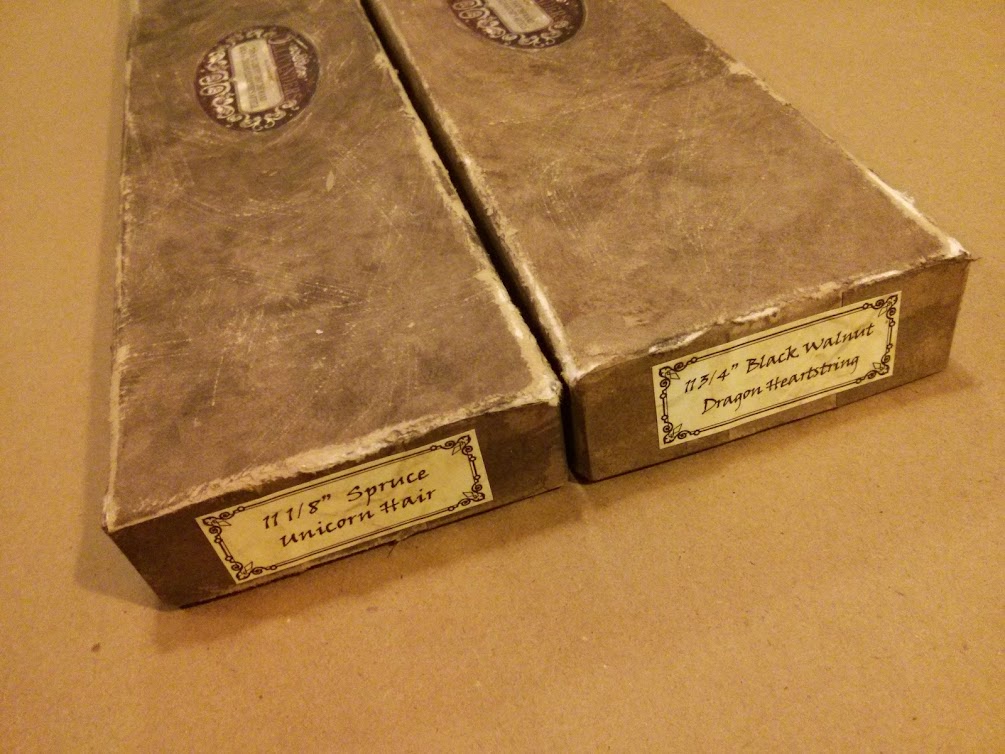 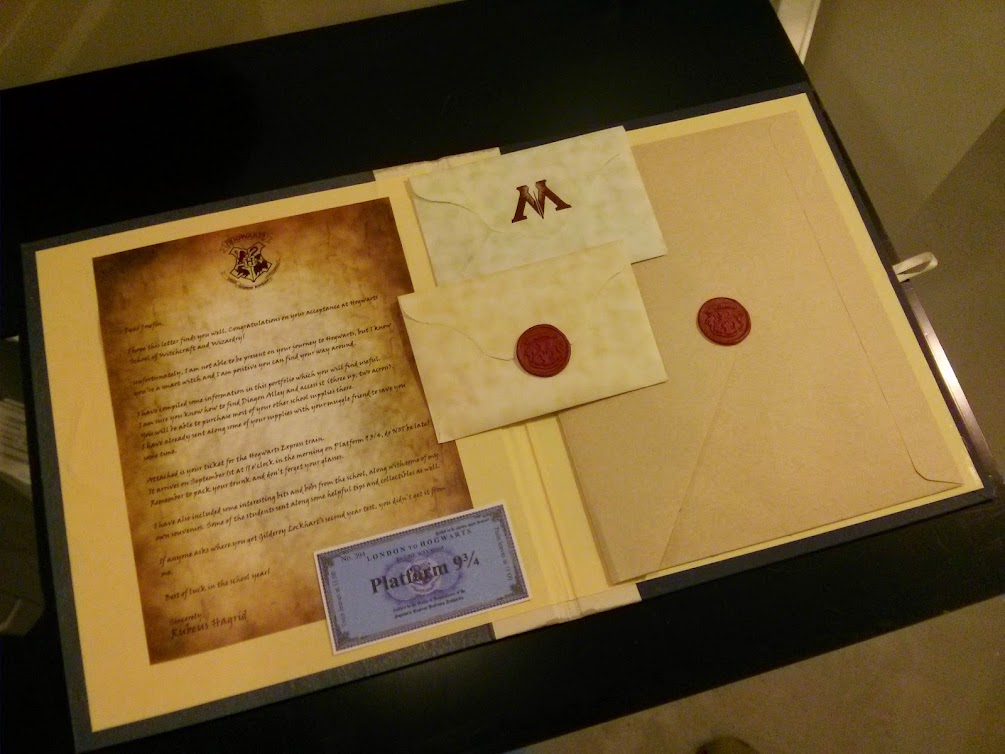 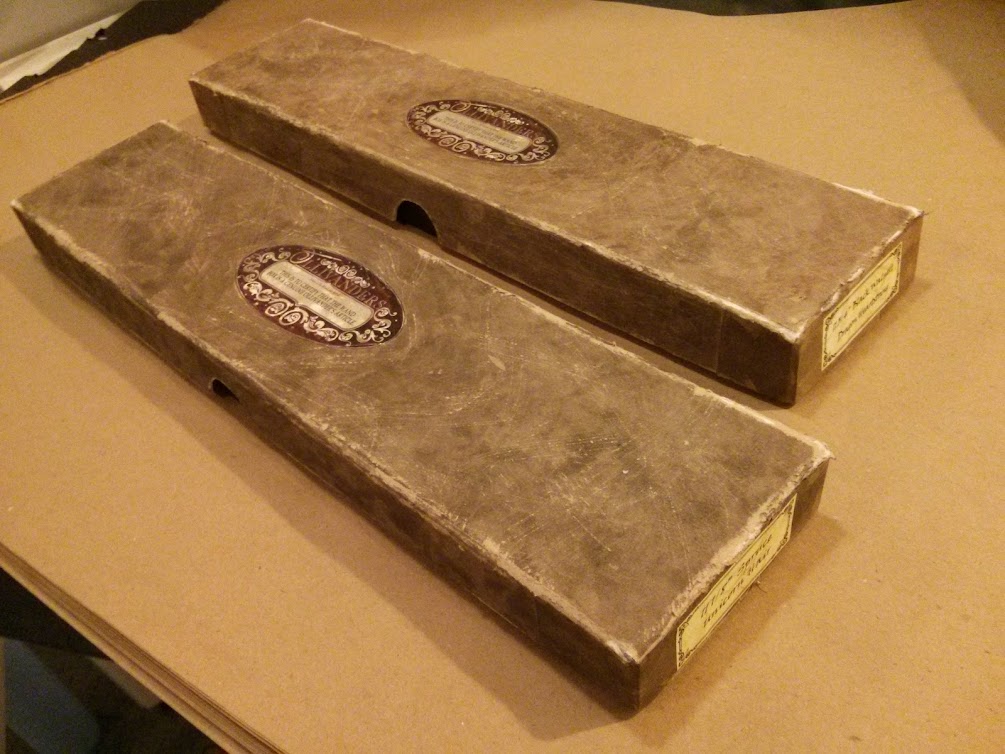 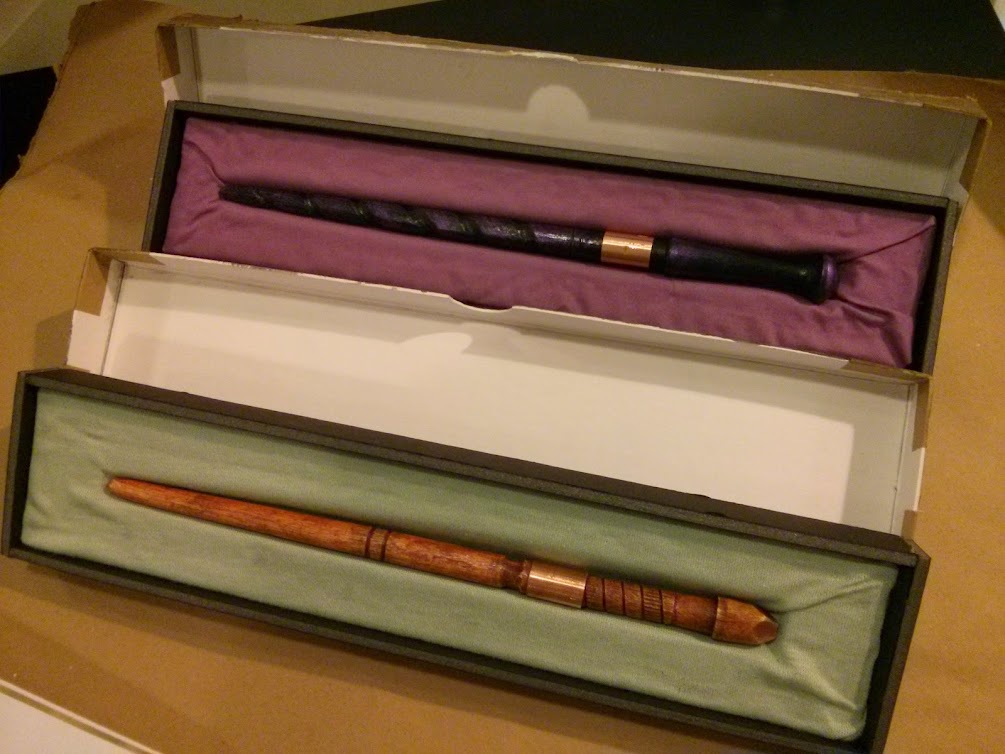 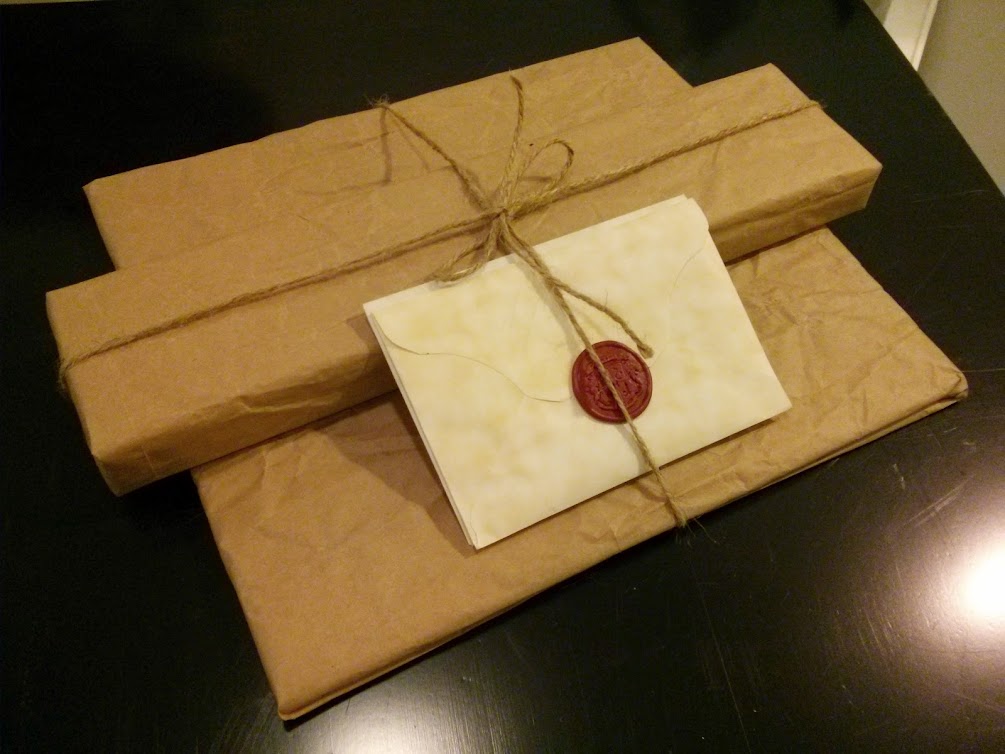 These are all fantastic!

I've done this before as well: surprising a kid with a potter-type parcel. I like to leave it someplace within sight, but a little odd, like it was dropped off by an owl. Adding some owl feathers around, and stuck in the wrapping as if it was just dropped off, is a nice touch too.

...The only trouble is - that kid is gonna be expecting to go to Hogwarts now instead of whatever terribly bland school they attend. The down-side of fantasy.

But this is great! Well done!

The little girl got her gift today, she was speechless. Mischief managed!

Thanks Ecl. She loved it!

At first I couldn't tell if she liked it or was unimpressed. I asked her mom and she said "this is how she gets when she's overwhelmed". Just neutral expression, flipping through each paper prop and reading and absorbing everything.

She ran upstairs to grab a cape / robe she had, that happened to be black and purple. Which happened to match her glasses and the wand. I got a huge hug afterwards, and her little brother was also excited about his wand (ironically, he had asked for a wand for Christmas but didn't receive one). The little girl thoroughly enjoyed the gift!

Her parents were super grateful and said she probably wouldn't sleep from the excitement.

Great things, all around.
H

Everything looks great! Its so touching that you did this for her. I went through something similar as a kid and I know this would have meant the world to me! Well done.

WOW that is so admirable of you...simply amazing....Ive in the past refurbished computers that friends and family just gave to me and given them to needy families i knew with kids who had no home computer...is a nice feeling...im sure you slept well that nite too. ""Props"" To You ! ! !

Holy crap! That's amazing what you did for her. Excellent work Panda

I'm sorry I missed this thread last year, but I just have to say now how wonderful all your HP things are and how generous and thoughtful your gesture was. Wow, you may have changed this little girl's life! There is no better reason in the world to create props than that! You have my admiration!

PotionMistress said:
I'm sorry I missed this thread last year, but I just have to say now how wonderful all your HP things are and how generous and thoughtful your gesture was. Wow, you may have changed this little girl's life! There is no better reason in the world to create props than that! You have my admiration!

Thanks PotionMistress sorry for the late reply. Glad you like and appreciate this. Hopefully this inspires another HP fan to do something similar and give back!
Last edited by a moderator: Nov 8, 2018