Far out in the uncharted backwaters of the unfashionable end of the western spiral arm of the Galaxy lies a small unregarded yellow sun. Orbiting this at a distance of roughly ninety-two million miles is an utterly insignificant little blue green planet whose ape-descended life forms are so amazingly primitive that they still think digital watches are a pretty neat idea. These primitive people celebrate wide variety of various different holidays, be it regional or international, often involving religious beliefs of some higher power, including the day where a man is nailed to a tree for saying how great it would be nice to people for a change.

However, on this particular Wednesday, not a Thursday, many of these ape descendants celebrate one of the most well regarded, highly respected works of literature to ever come out of the great publishing corporations of Ursa Minor and the author responsible for it: The Hitchhiker's Guide To The Galaxy by Douglas Adams. More popular than The Celestial Home Care Omnibus, better selling than Fifty-three More Things to do in Zero Gravity, and more controversial than Oolon Colluphid's trilogy of philosophical blockbusters Where God Went Wrong, Some More of God's Greatest Mistakes and Who is this God Person Anyway? It's already supplanted the Encyclopedia Galactica as the standard repository of all knowledge and wisdom, for two important reasons. First, it's slightly cheaper; and secondly it has the words DON'T PANIC printed in large friendly letters on its cover.

In regards to this date of celebration of May 25th, to which is dubbed "Towel Day", the Guide's entry has this to say on the topic of "towels":

“A towel, it says, is about the most massively useful thing an interstellar hitchhiker can have. Partly it has great practical value. You can wrap it around you for warmth as you bound across the cold moons of Jaglan Beta; you can lie on it on the brilliant marble-sanded beaches of Santraginus V, inhaling the heady sea vapors; you can sleep under it beneath the stars which shine so redly on the desert world of Kakrafoon; use it to sail a miniraft down the slow heavy River Moth; wet it for use in hand-to-hand-combat; wrap it round your head to ward off noxious fumes or avoid the gaze of the Ravenous Bugblatter Beast of Traal (such a mind-boggingly stupid animal, it assumes that if you can't see it, it can't see you); you can wave your towel in emergencies as a distress signal, and of course dry yourself off with it if it still seems to be clean enough.”

Happy Towel Day, everyone! And I hope you all remember where your towels are!
Last edited: May 25, 2016

Happy Towel Day once again, everyone. Remember: no matter where you go, ALWAYS remember where your towel is.

RPF PREMIUM MEMBER
You are one hoopy frood.

My towel got high and wondered off .

Changed my towels today,so they're ready to go

Every day is towel day for me (you use them every day,right?),so no hope is lost.
More power to the towel !

I may have missed out on the past few years, but Happy Towel Day, everyone!

May the towel be with you always (but never throw it in the ring). 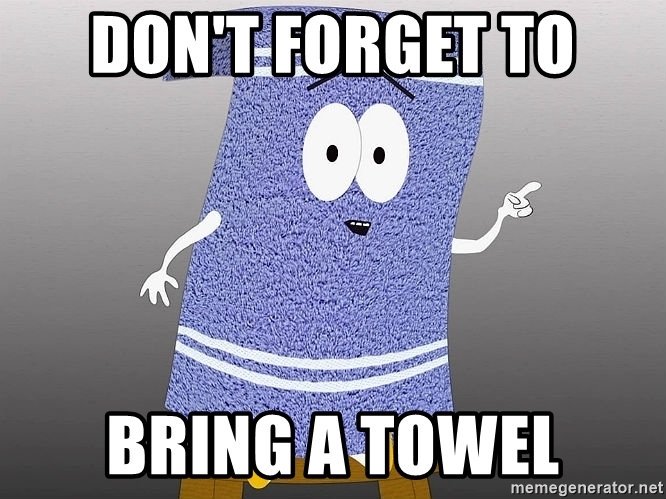 Yesterday at 6:12 PM
The Portugeek