RPF PREMIUM MEMBER
After quite some time experimenting and practicing, I went ahead and made a puppet replica of Kermit the Frog; something that I've wanted to do for years, but wasn't sure if I would be able to do.

Materials: Dyed "Antron" type fleece from Etsy, dyed felt, Ultrasuede, armature wire (for the fingers), ping pong ball spraypainted white and halved for the eyes, black "velvet" adhesive for the pupils, contact cement for gluing parts for the hands, feet, and mouth plate, foam for the body, and stuffing for the limbs.

Patterns: The pattern for the head was a slightly modified version of one that was discussed in a thread here on RPF years ago. It seemed like a pretty good pattern to start with. The patterns for the arms,legs, and feet were slightly modified from the Master Replicas photo puppet. Hands were made separately and then attached to the arms for maximum articulation.


First thing was to practice the "Henson" stitch, which turned out surprisingly easy to pick up, even though I have minimal experience with sewing. I simply found on YouTube several great tutorials. The fleece is also very forgiving and stretchy, so the seams can be hidden quite well with a little bit of fluffing with the needleafterward. 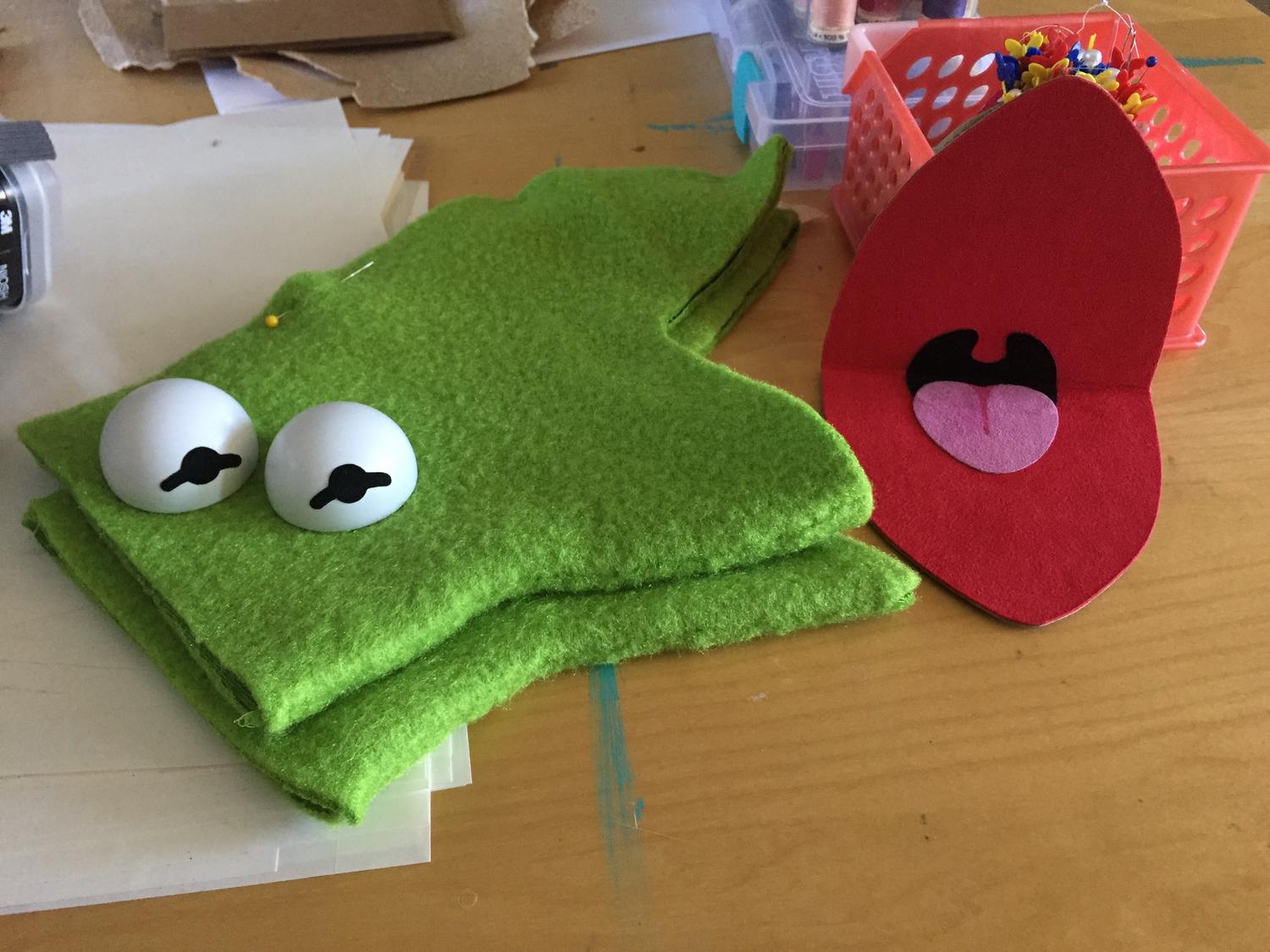 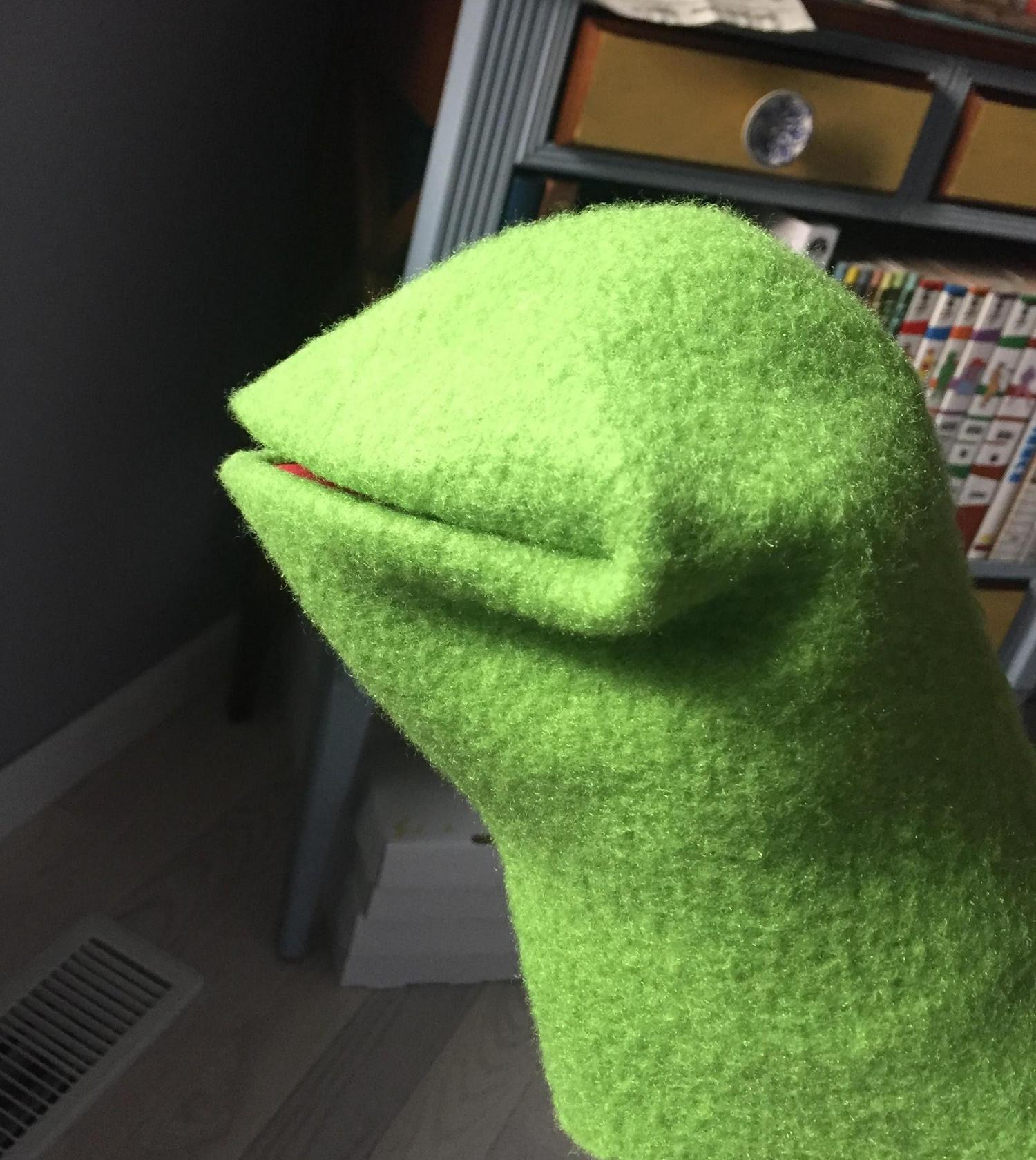 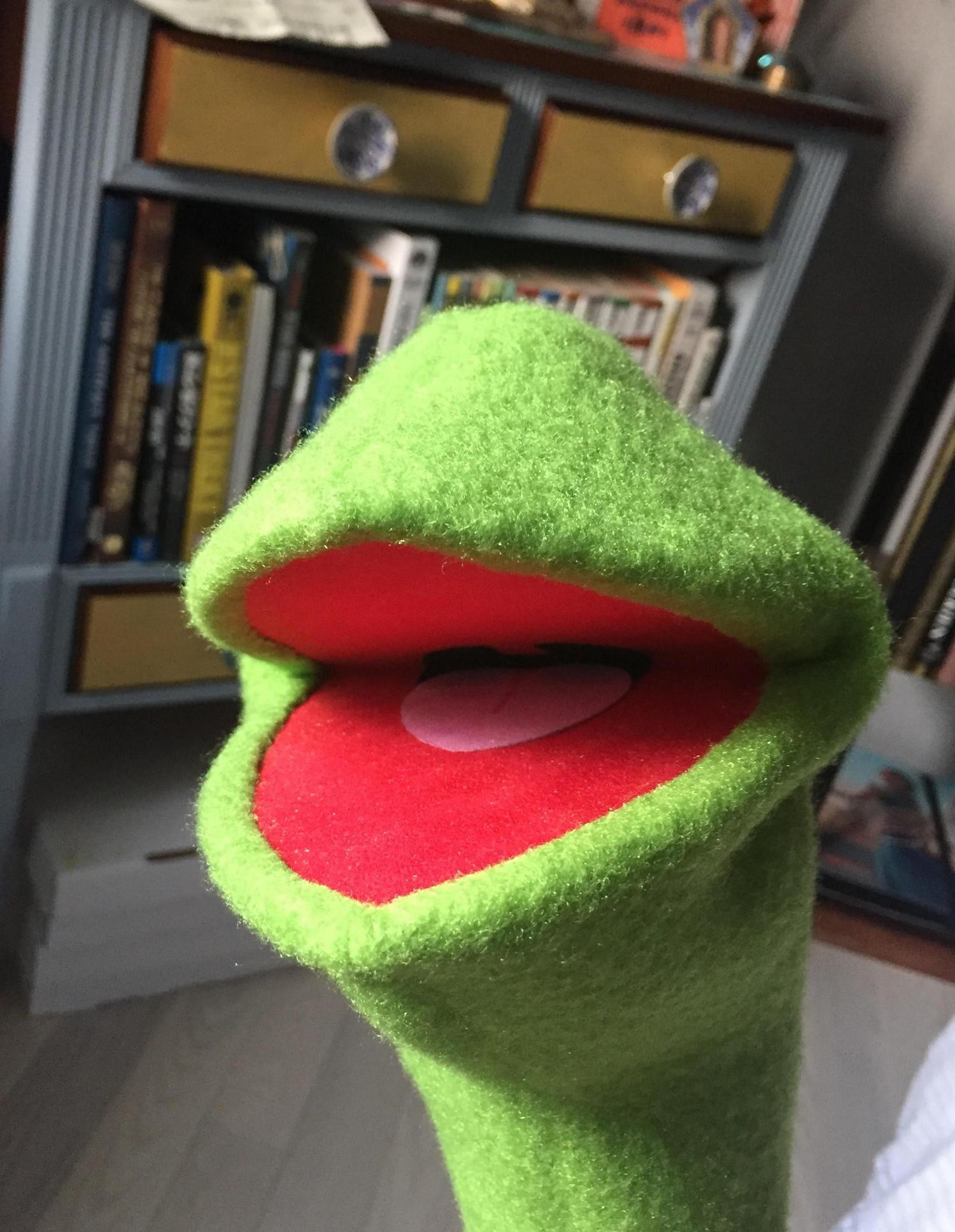 Next was building up the body. Here's a pic of it in its early rough shape. (sitting over my MR replica ). For some reason it looks huge in this pic. It's mostly camera distortion. The puppet is indeed larger than the MR photo puppet, but not THAT much larger. 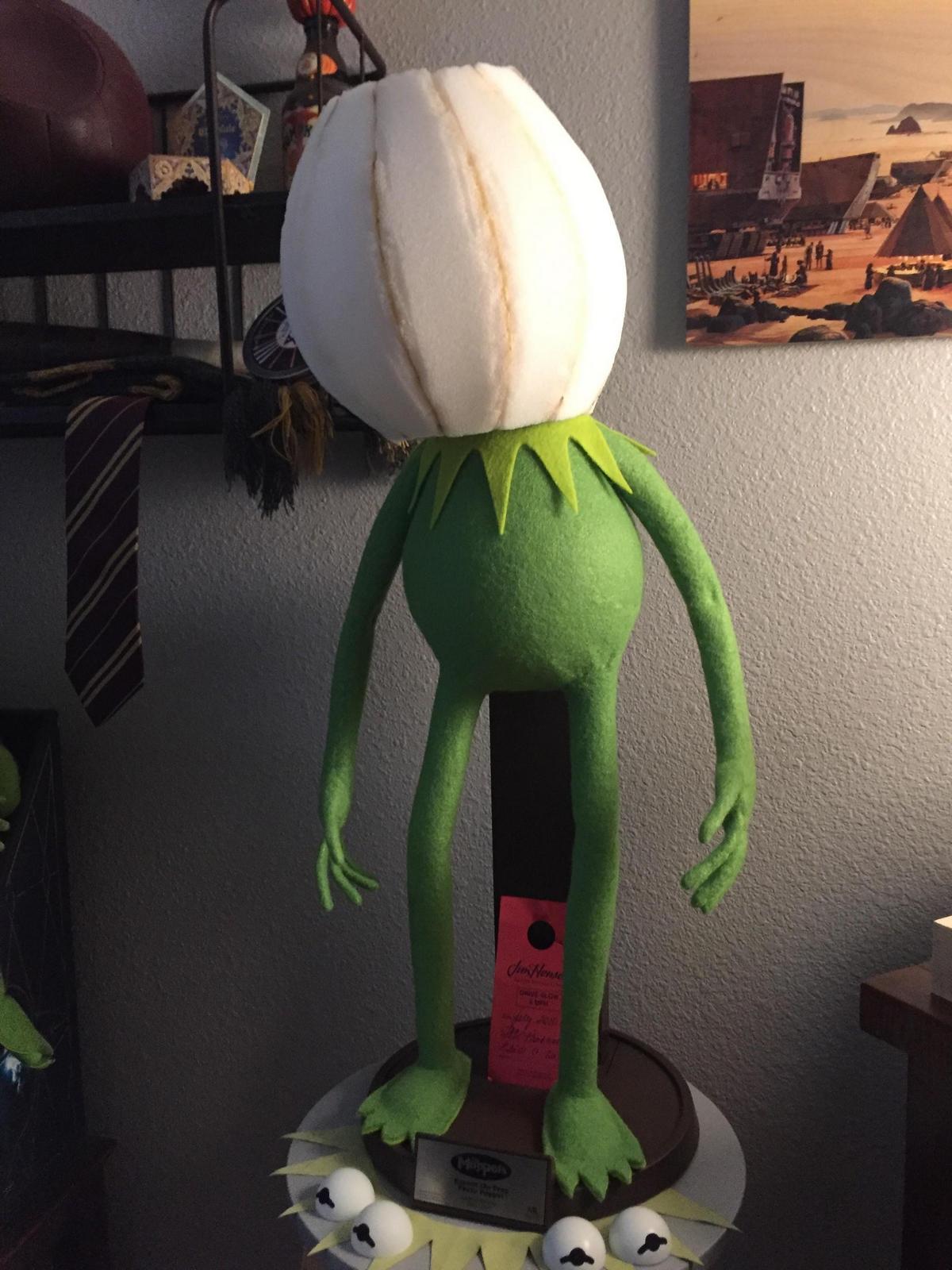 Next was getting the fabric to fit over the body, which took a lot of stretching, trimming, sewing in the seams, to get it to look right. 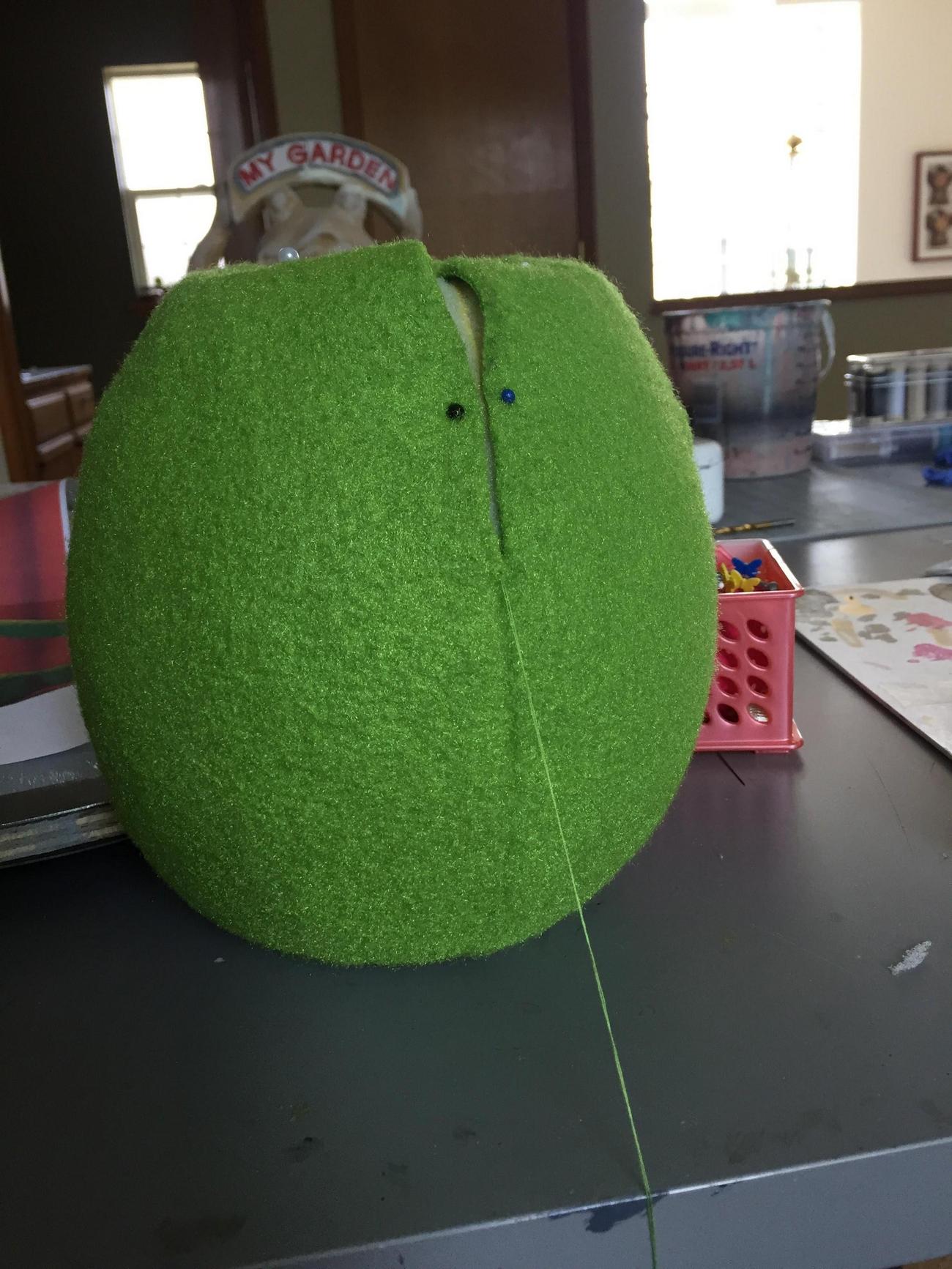 The hands are simply made from small pieces of thin cardstock with wires epoxied onto it. The paper you see underneath is a pattern I drew up to use as a sizing guide. The palm was partially sewn on, and bit of stuffing added. Finger fabric was glued with contact cement. One thing of note is that all of the "joints" in his arms and legs have been left without stuffing, to ensure maximum pose-ability. It's something that occurs on the original puppets that i wanted to replicate. 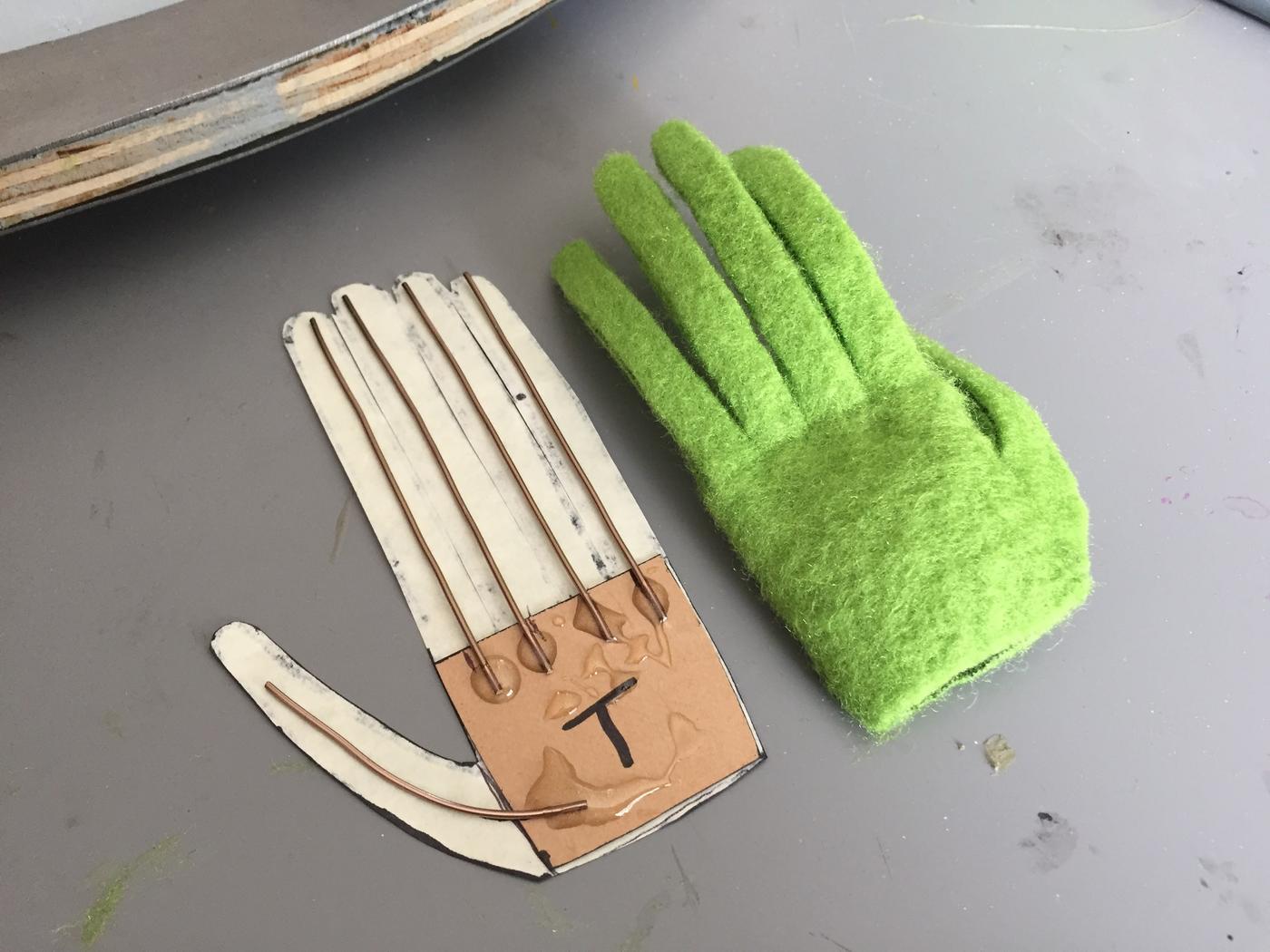 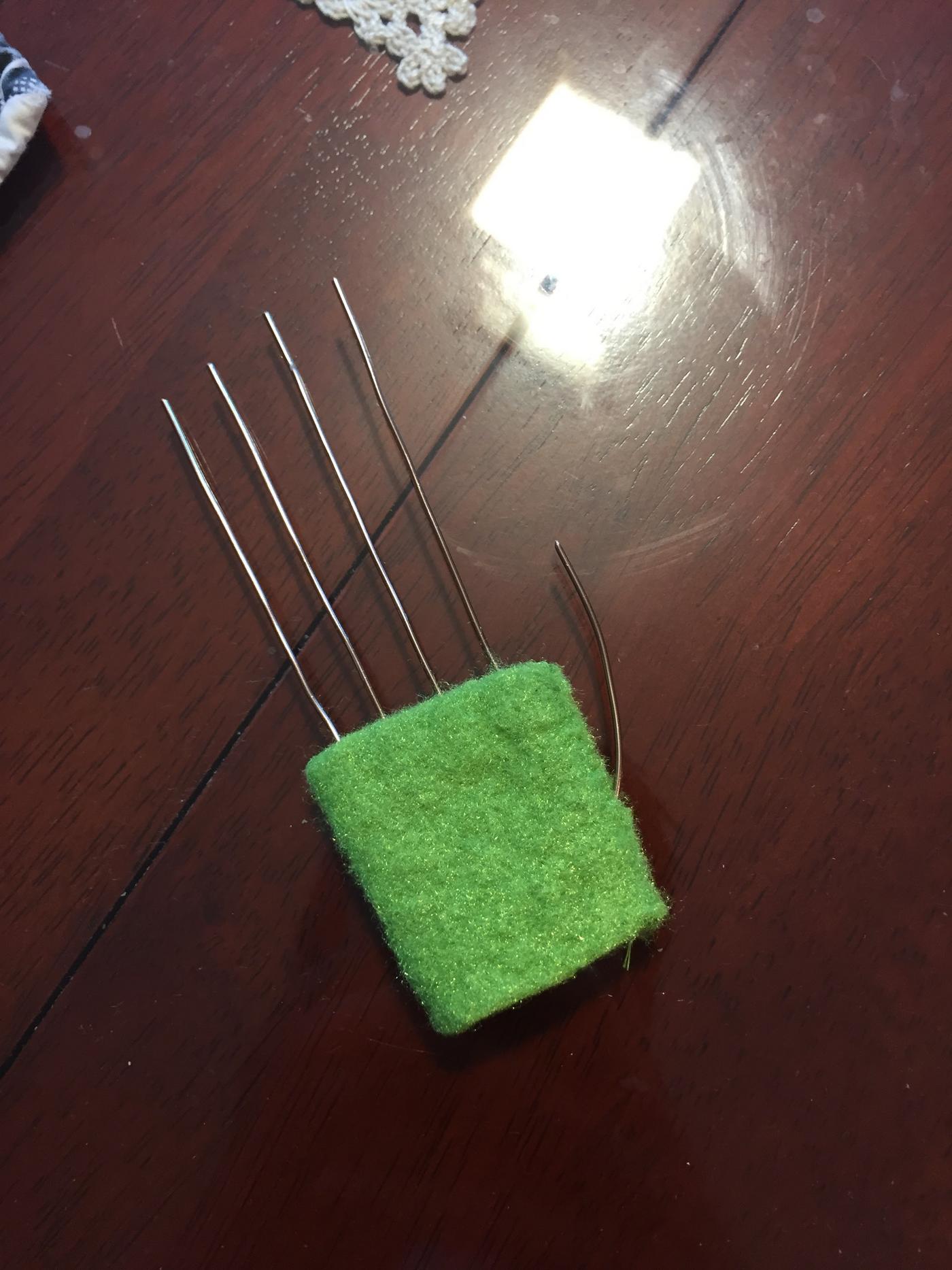 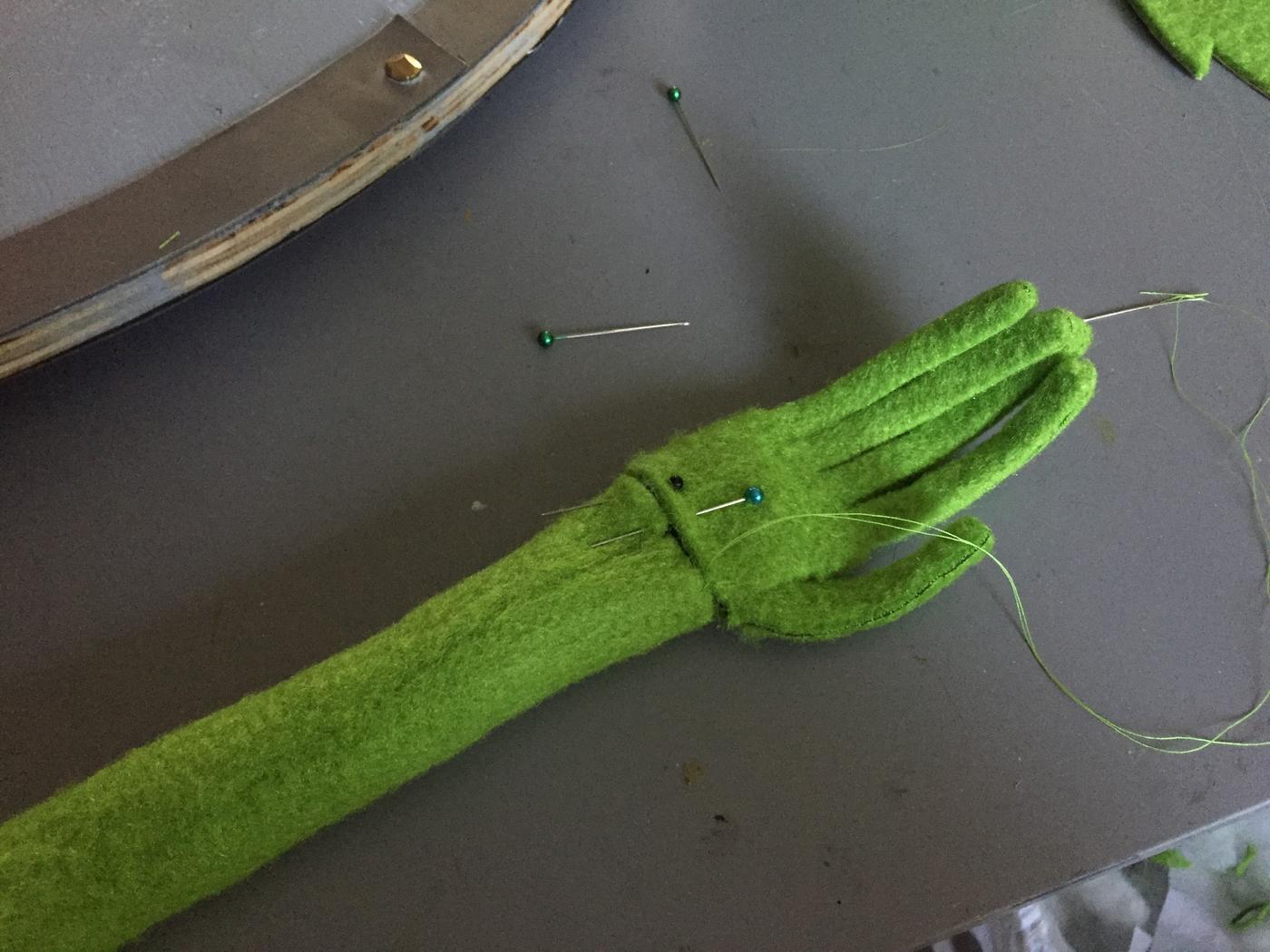 Working on a leg and foot 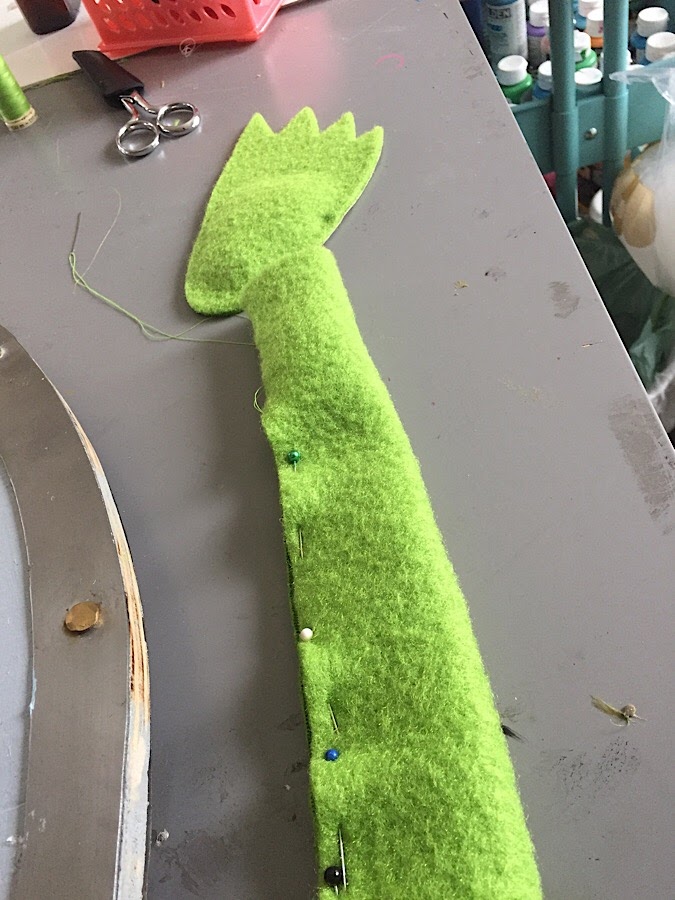 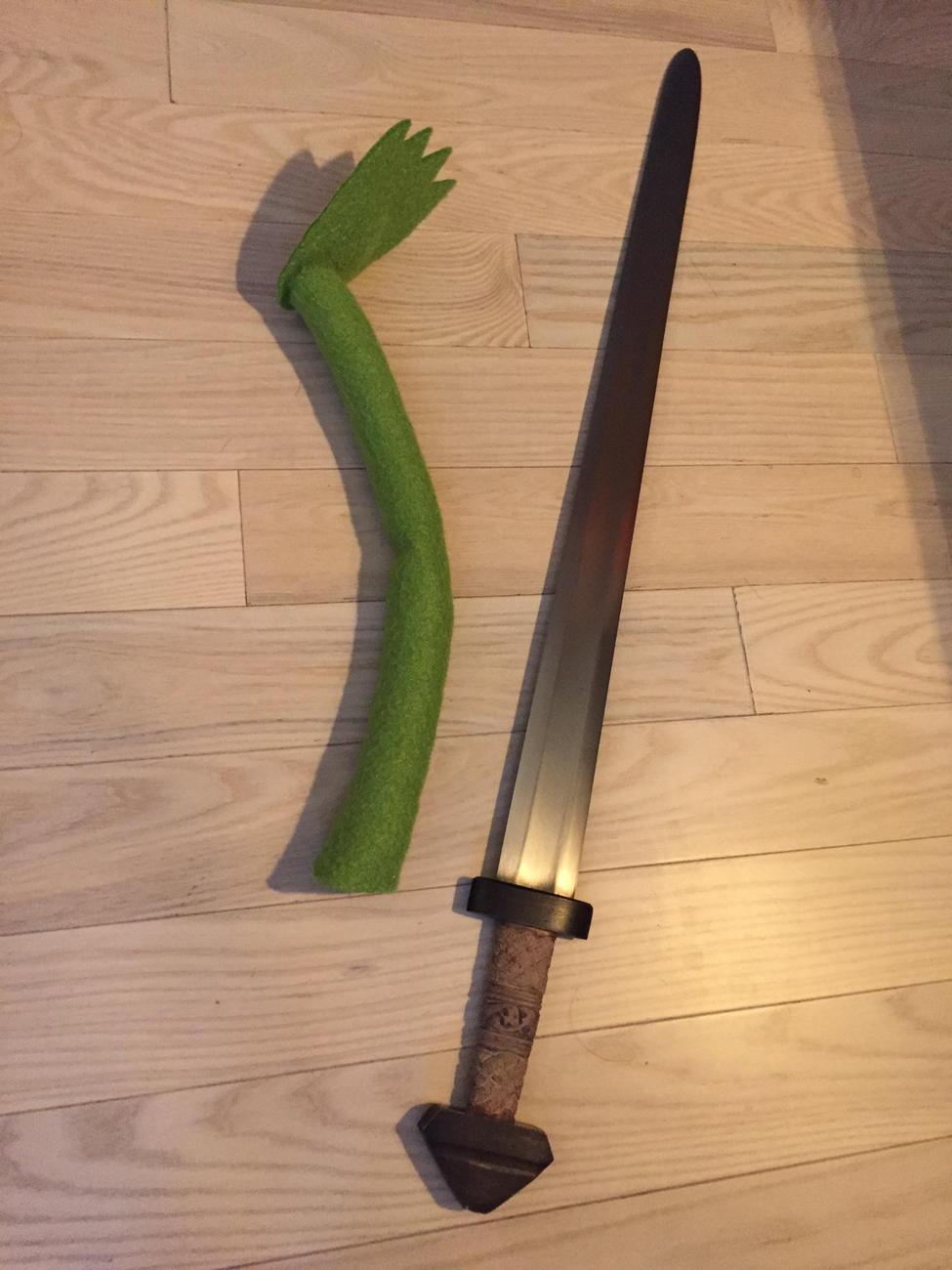 Messing around with limbs: 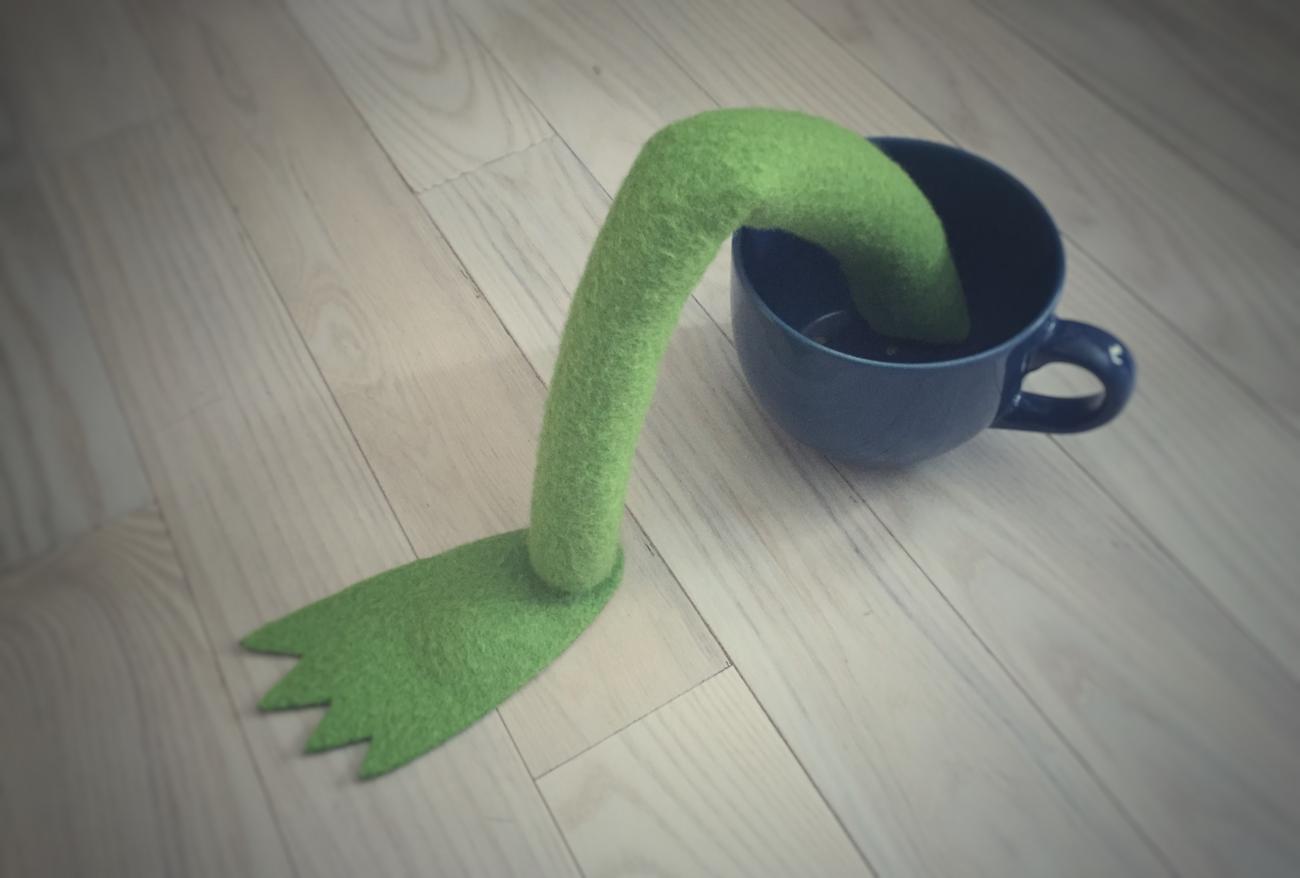 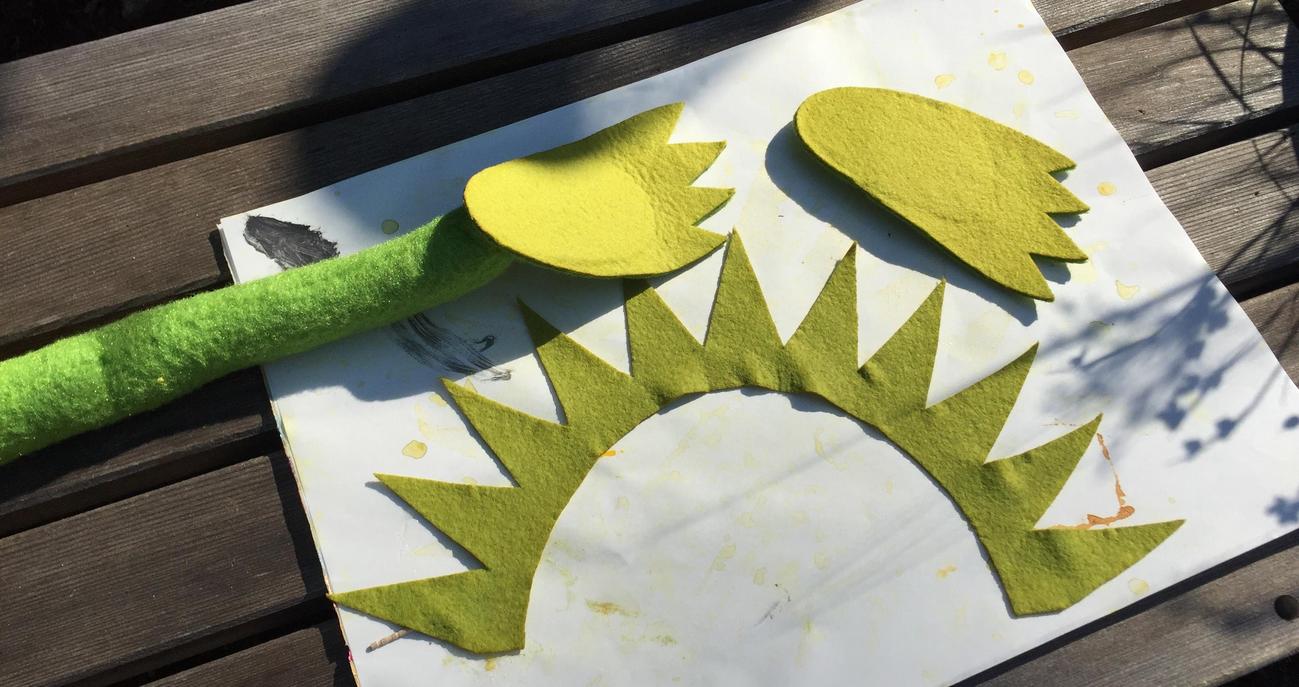 "Who am I?!" Here's a pic of the head already stitched onto the body, but the arms pinned in place. It was very important to utilize the pins during sewing to keep things from shifting around: 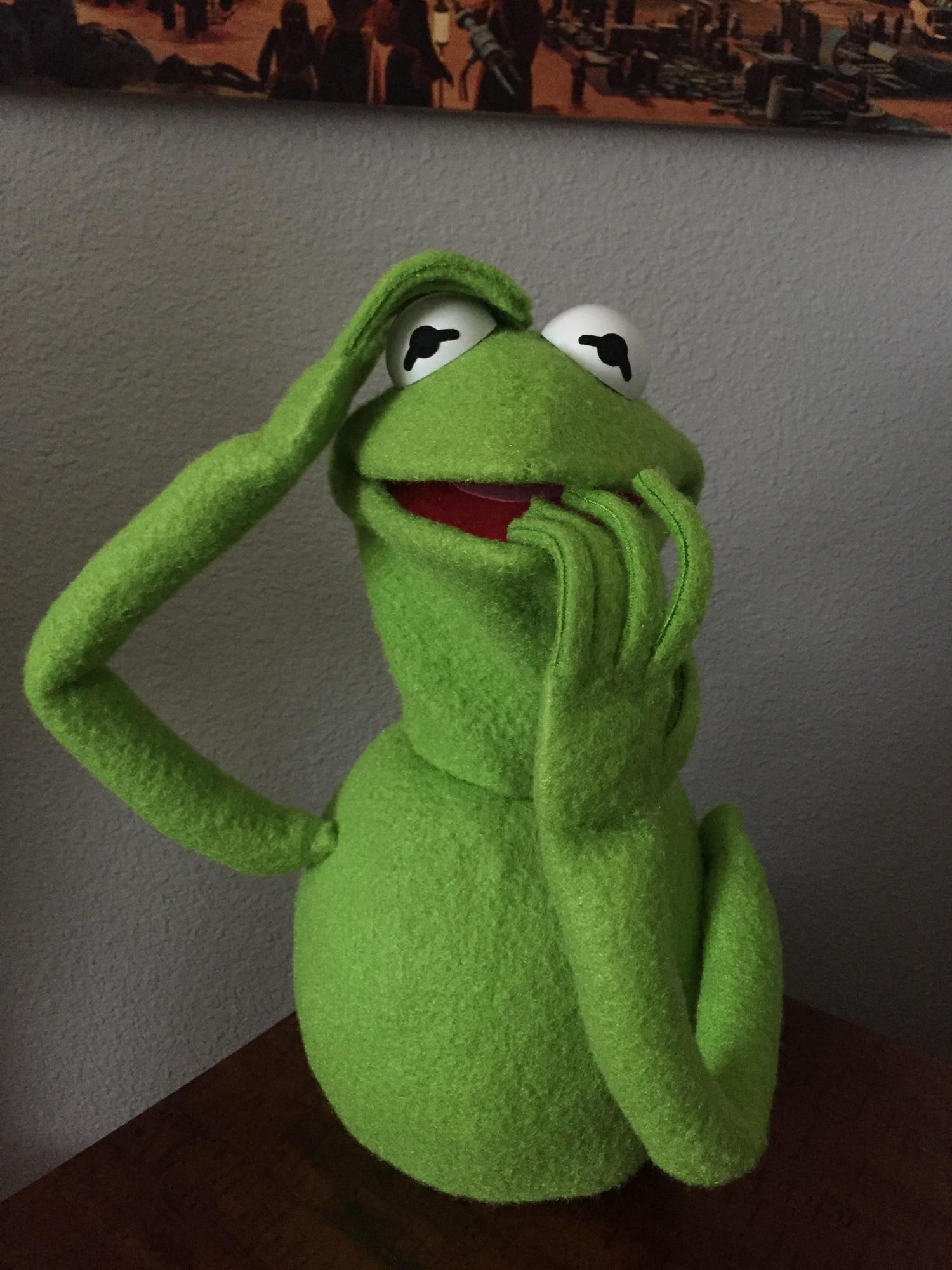 In progress but getting there! 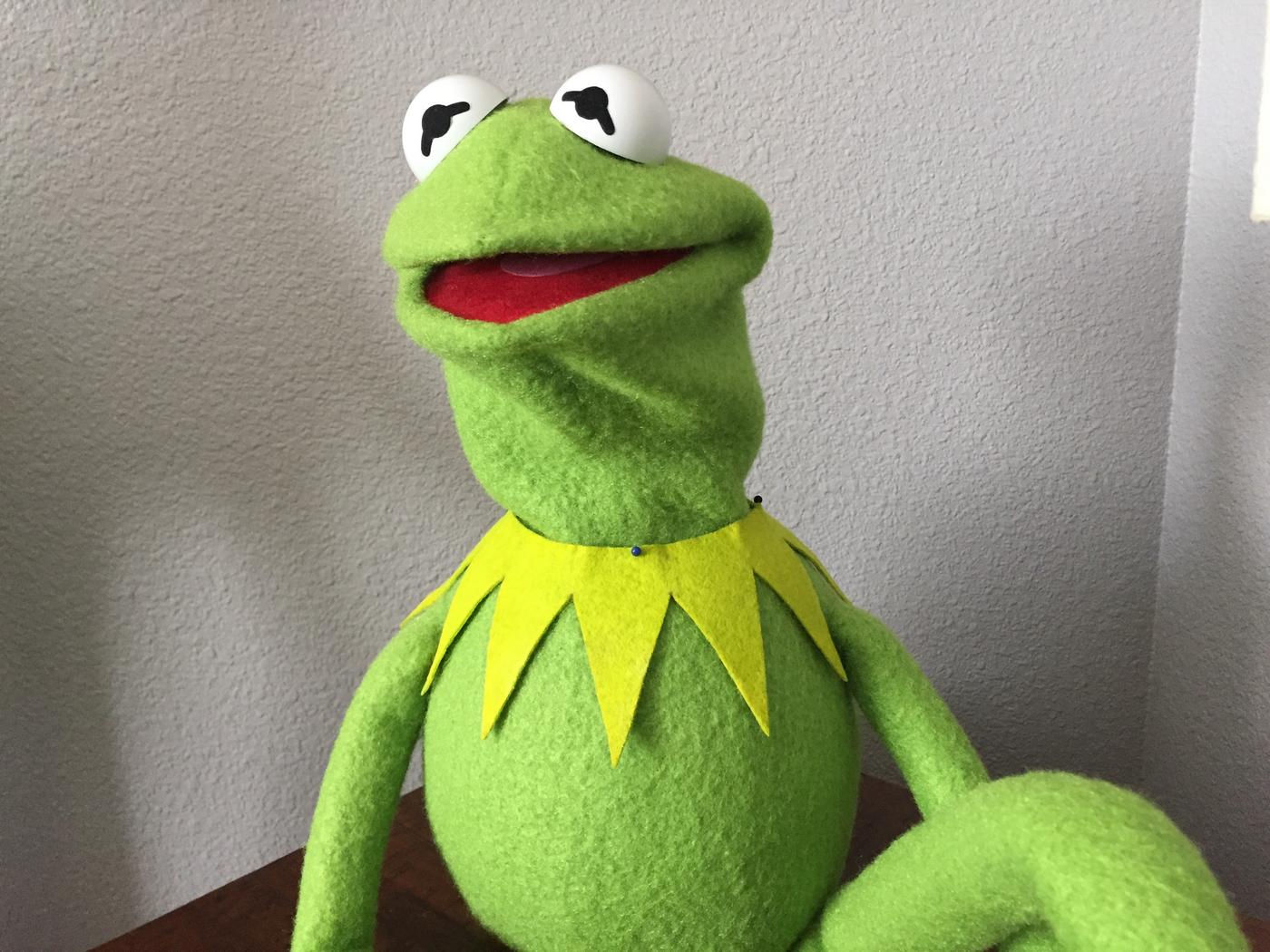 And below is pretty much the almost finished piece. Just need to stitch on the collar and attach the eyes, which I'll probably do via velcro so that I can easily remove them. Keep in mind this is a puppet, so the head is not filled with anything. I've added some stuffing for the pictures, as well as a tall cup that is holding his head up. I'll be building some sort of armature inside for display purposes since I don't really plan on using it as a puppet anyway. I have yet to add the holes in the hands for the hand rods but will do that at a later date. 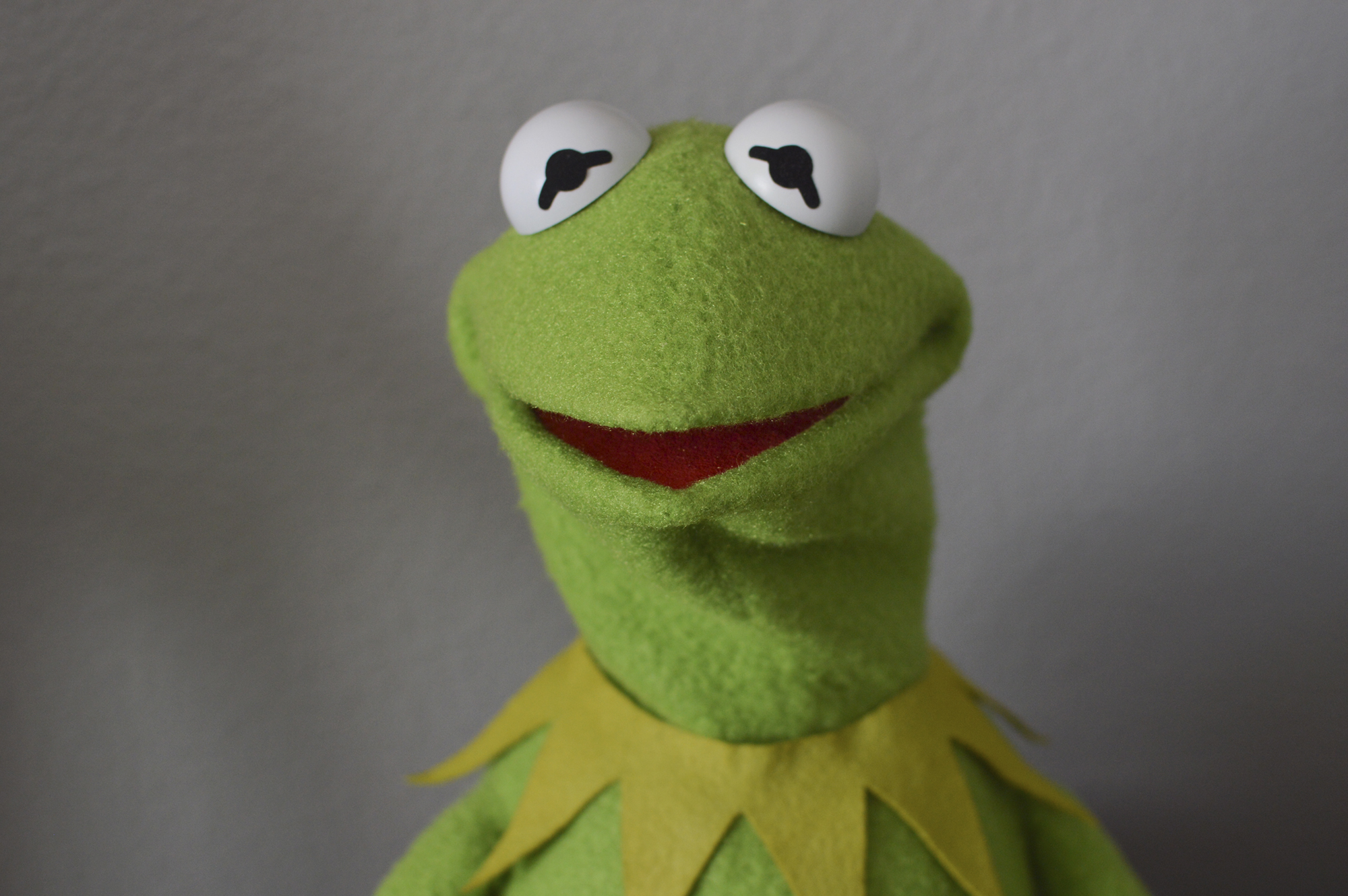 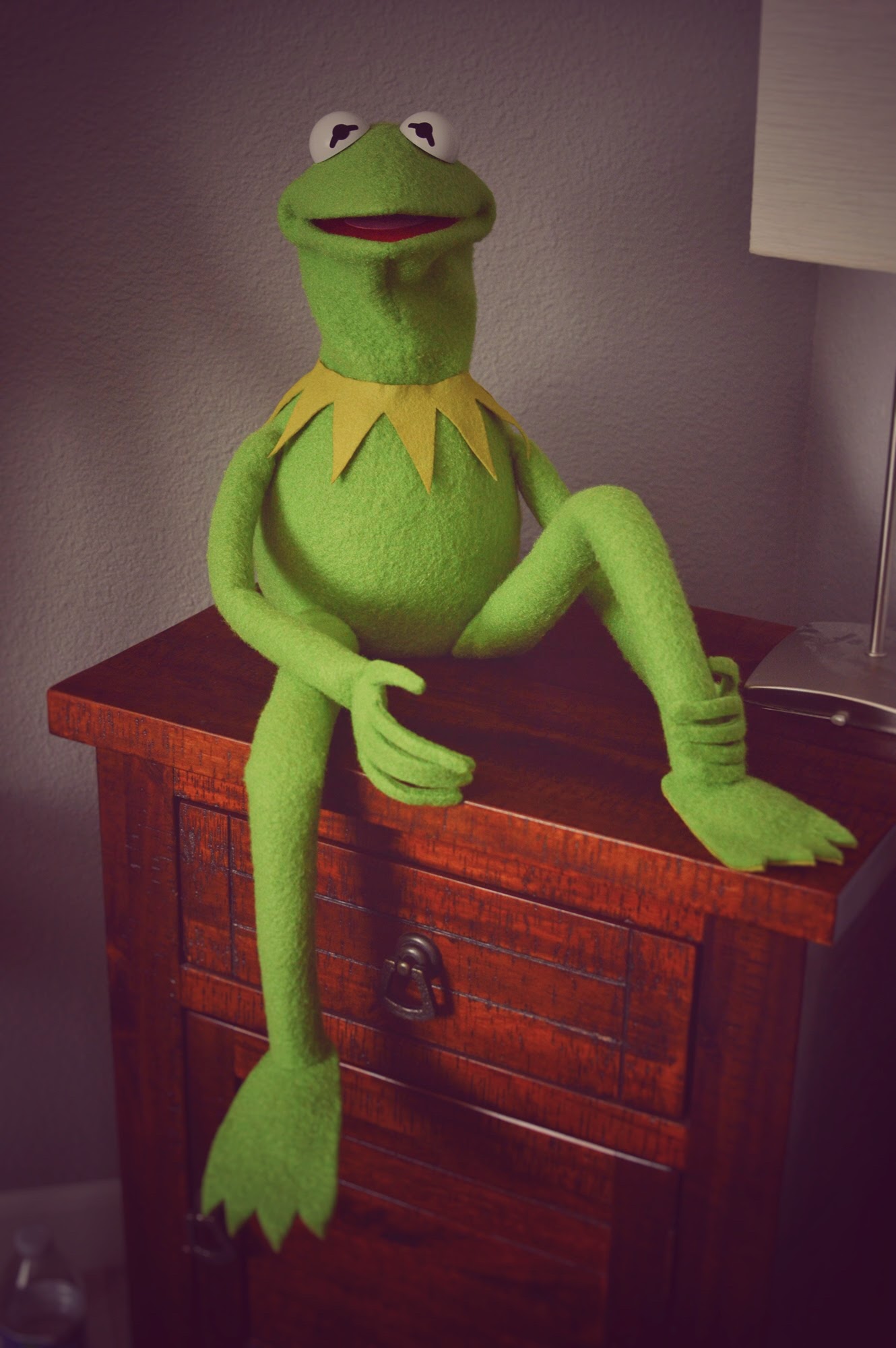 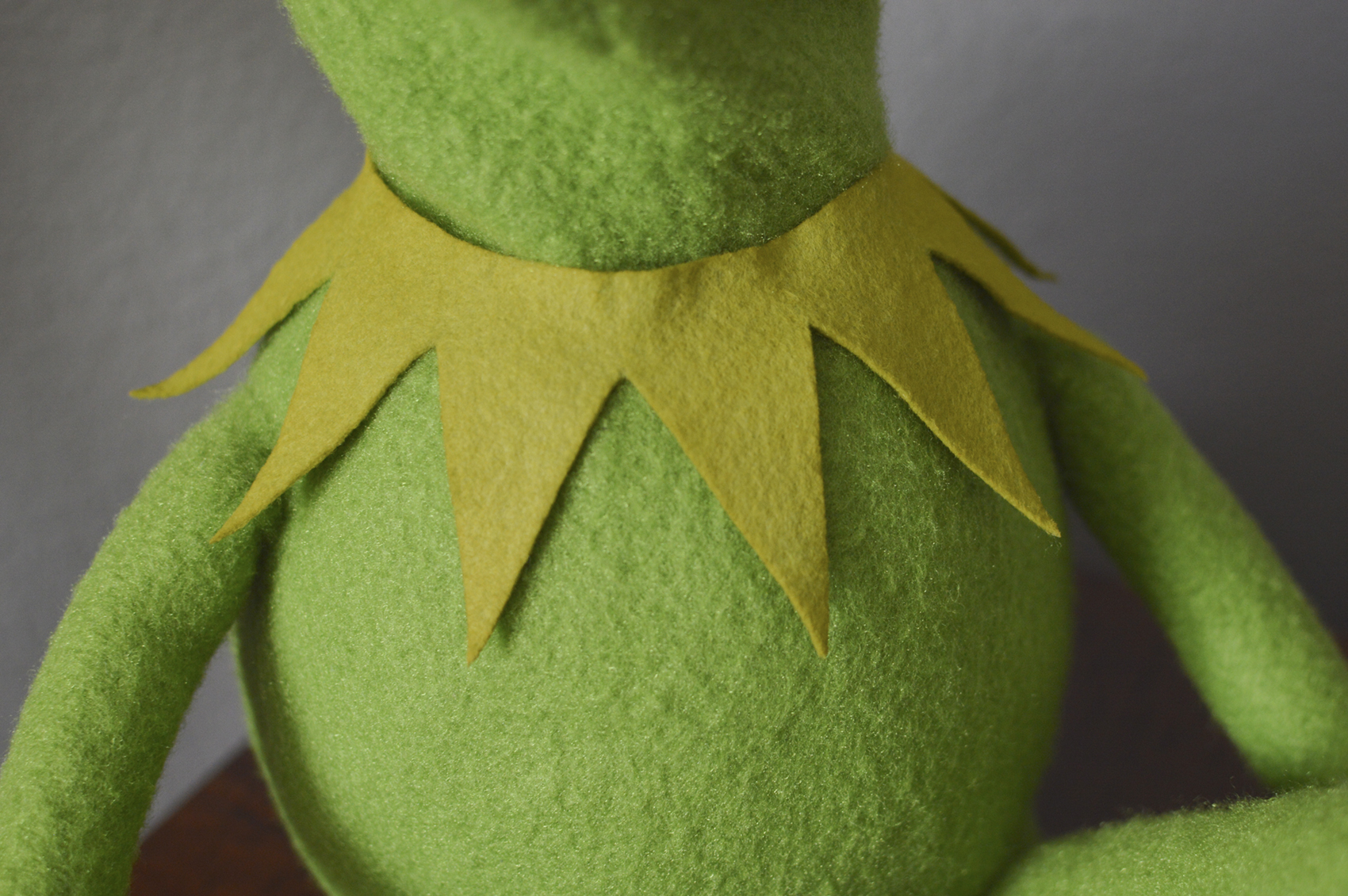 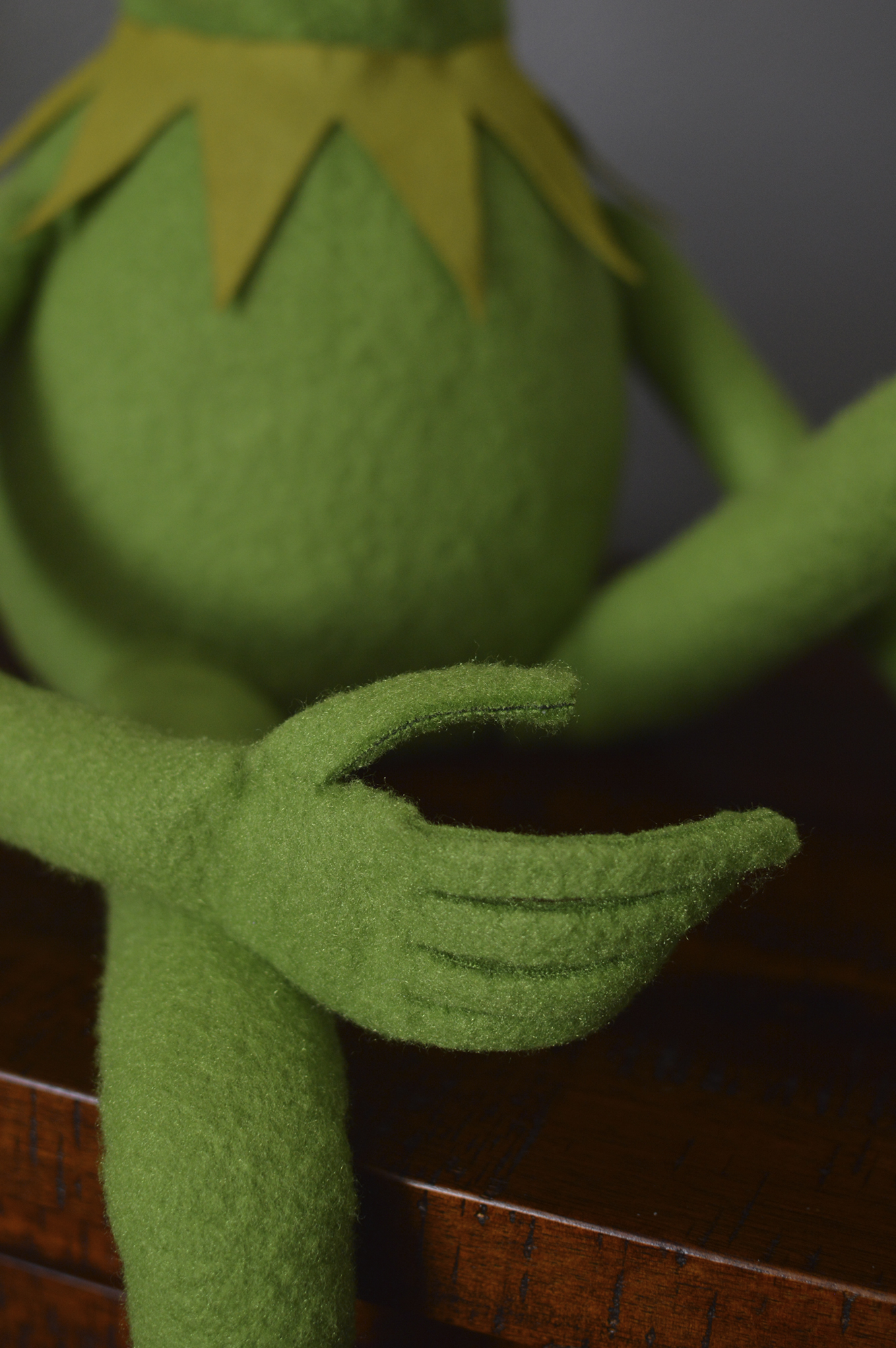 Kermit has always been a favorite of mine, so this was one amazing experience! Probably the most fun prop building project I've ever attempted. Took just a little over a month on this piece, not counting the week or so spent experimenting and practice stitching.


Version 3 Kermit; the final one I made. Inspired by the earlier Kermit look: 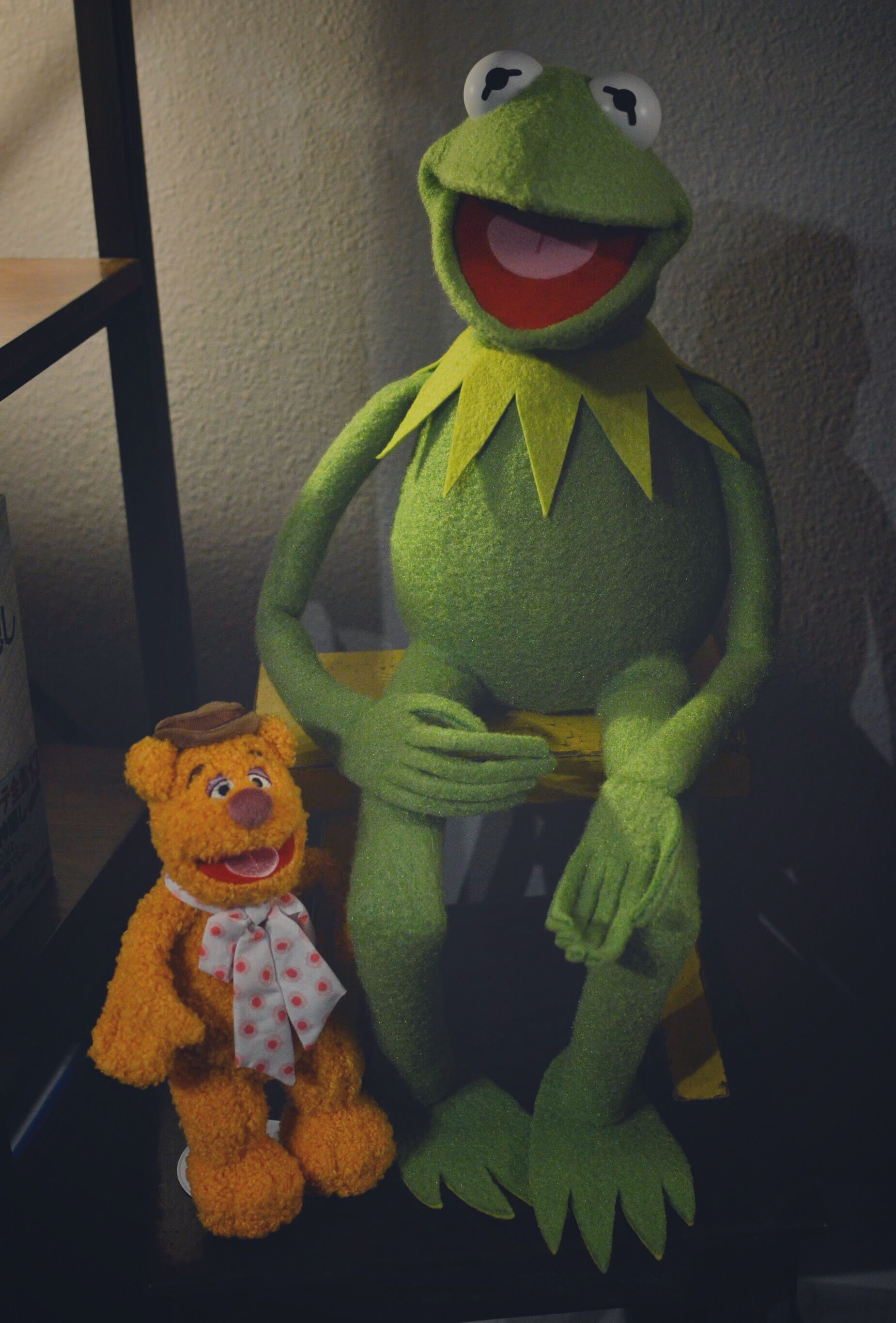 Sent from my SM-G955U using Tapatalk

Looks better than the original!

Wow that's awesome I want one

Thanks for all the comments! Much appreciated. It's been awhile since I've had so much fun making something so I'm glad to share the experience. I'd have to say, puppet making is kind of addicting. I've begun to think of what other characters i might attempt to make next. Nothing for sure yet though.

The Master Replicas Kermit is really cool. I jumped on it the second it was released years ago, as there really weren't any options to buy full scale Muppet replicas. He has his inaccuracies, but it's a neat piece. It's still disappointing to me that the license was passed onto the dreadful efx after Master Replicas went away....meaning we'll never see any new product.

As for the sword, I only have three swords in my collection (all customs). This one was made by Scott Roush (bladesmith in Wisconsin. He makes some really neat knives as well). I always have to sneak one in a picture whenever the chance arises haha!

Awesome work, can't take my eyes off of it. It you told me this was an original Kermit, i most certainly would have believed you.

Always fun to see great stuff like this, that I just wasn't expecting when I logged in. A++

This so cool! Congratulations!
Check out this video, you will find most entertaining and informative.
https://youtu.be/JYwNuP7cwJs
I always loved Jim Henson's work.

This is phenomenal! I've wanted a Kermit forever.

It's not easy being green, Nice job

Thanks again for all the comments! After looking at a bunch of photo references of the originals, I'd noticed there are so many versions of him, so I did my best to draw influence from several of my favorite ones.


jcgardea said:
This so cool! Congratulations!
Check out this video, you will find most entertaining and informative.
https://youtu.be/JYwNuP7cwJs
I always loved Jim Henson's work.

Sent from my iPhone using Tapatalk
Click to expand...

Wow thanks for linking that video! It's fantastic! Really glad to see their build process and the materials used. That's also the first i've heard of the boning strips for making the foam structure more solid. I will have to look into that.

Amazing! I love it.

I attempted Kermit about four years ago. Used Anton fleece (wonderful stuff). Got as far as the head and put it aside. You did good!!!

Well, I have extra fabric leftover, enough to make one more....so that's what I've decided to do. I'm making some small adjustments to this second one, mostly going to make his body thinner and slightly taller, which the earlier versions of kermit seem to exhibit. I'll post a comparison when I eventually finish the second Kermit.

Made the arms today. Much faster at this the second time around! 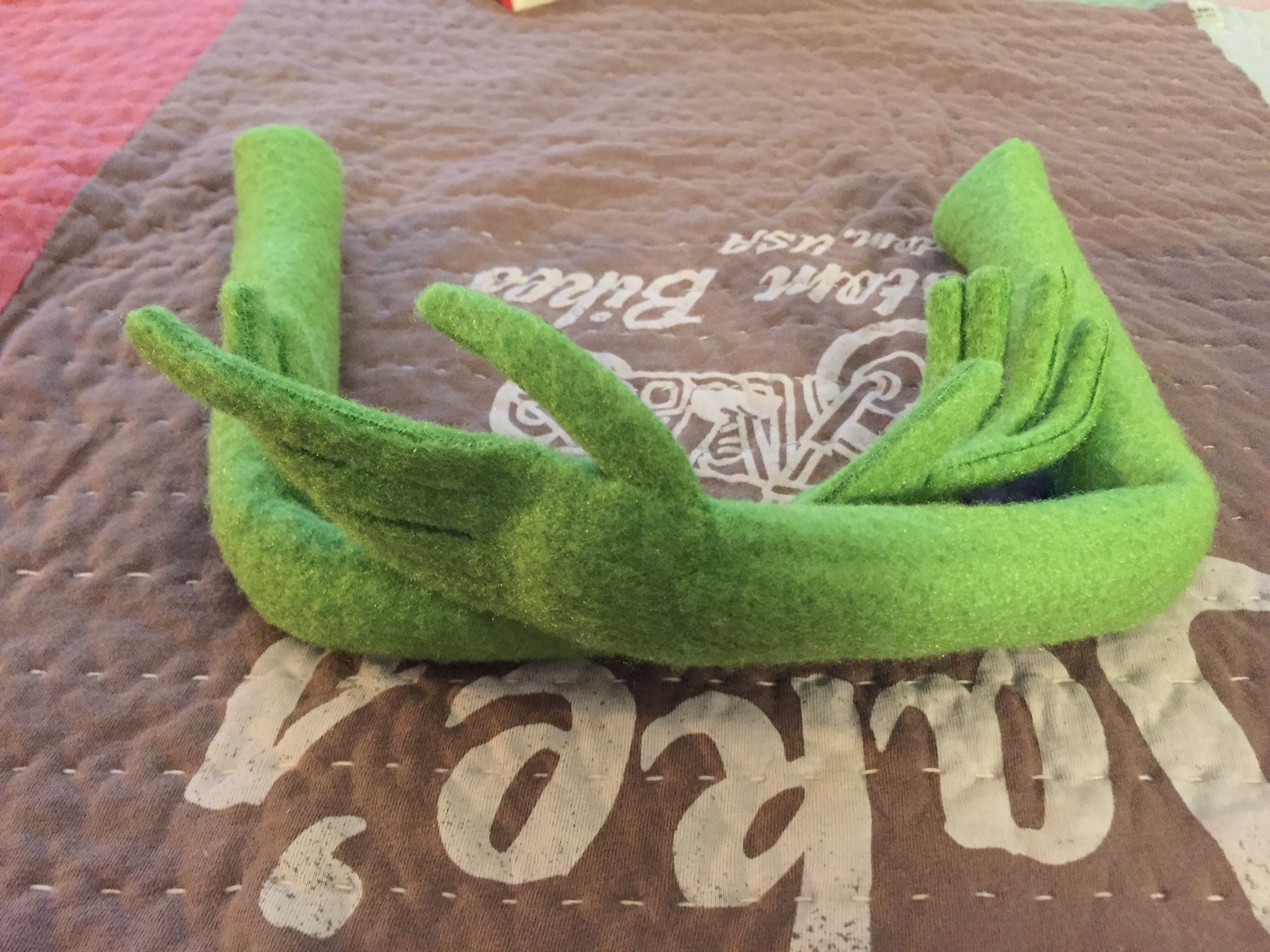 Freaky Kermit! (No I didn't actually attach an extra set of arms on him haha! Just messing around.) 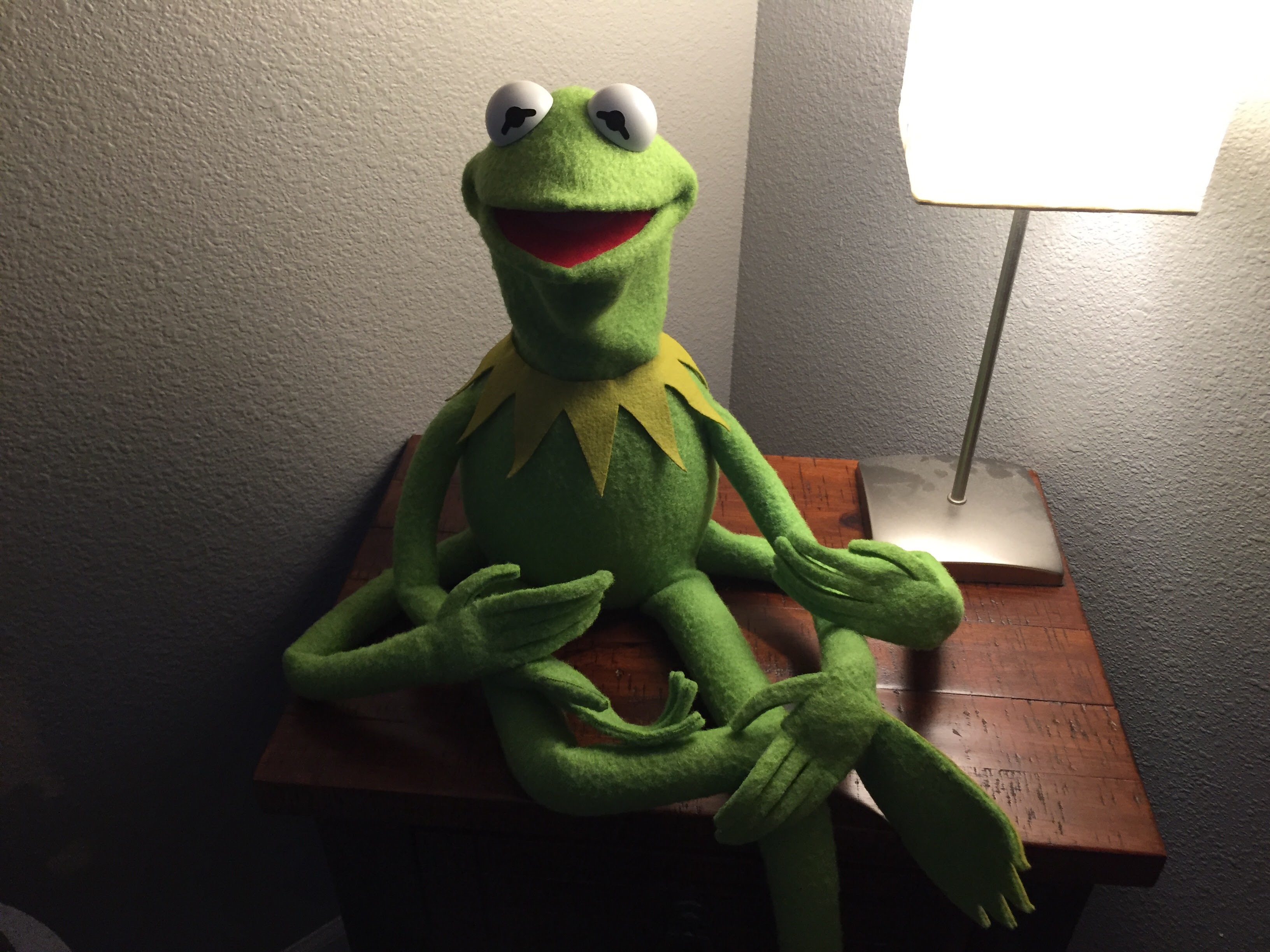 This has me seriously considering trying to make one of my own, but I haven't done any sewing since middle school...and I wasn't very good at it. I just watched a few videos on the Henson stitch, it seems pretty easy. Were there any other tutorials or references or anything that you used?


LTsmash1200 said:
This has me seriously considering trying to make one of my own, but I haven't done any sewing since middle school...and I wasn't very good at it. I just watched a few videos on the Henson stitch, it seems pretty easy. Were there any other tutorials or references or anything that you used?
Click to expand...

I'd say it's definitely worth a shot! The only references that I really used were the photos I'd gathered from all around the internet. For sizing, I pretty much estimated by using the eyes as reference, since the original apparently started with 40mm ping pong balls. After finding some good references that served as a size guide, I printed out an approximate 1:1 scale of kermit so that I had something to compare to. But the most important thing is to get the proportions right, so even if the size isn't 100% the same as the original, he'll just look just fine. Regardless, it appears the real Kermit has undergone some major variations and changes over the decades anyways!

When I get back home tonight, I will post the patterns I used on mine. I could also write down a few "tips" that I learned during the process. I don't mind sharing them (unlike the people over on the muppet central forum, which I can't even post in despite having an account!) I'd just recommend practicing the stitch on some scrap pieces of fabric. I also don't have much stitching experience, but luckily the Henson stitch with the "antron" fabric is very forgiving! I just went slowly and tried to be patient with it.

I'm in Seattle, so luckily there's currently a Jim Henson exhibit at the MoPop museum. There's a Kermit on display there, but I'm pretty sure it's a "photo puppet" as it's surprisingly small. Also, I saw no evidence of a hole on the bottom for performing the puppet. But still, I was able to spot some really important details (some pics of it in the album below). A lot of the puppets had some roughness to them as well, either from aging or just the way they were put together! So I wouldn't worry about "perfecting" the stitch either.

If anyone uses Google Photos, below is a link to an album of saved photo references that I've collected from all over the internet.