thd9791 said:
Why would someone bother putting the microscopic scratches and milling marks into something that was so wrong an item?

I havent seen the discussion turn towards this
Click to expand...

I believe any scratches or features on the fake that are similar to the hero are merely coincidental. They are not close IMO. Scratches and tooling marks will be similar because the same milling functions are being performed.
You can always find a few that will line up. But “most “ have to line up to be correct.

But if they actually did add the correct wear marks... the answer to why bother would be for a million dollars...

I just saw a repeat of the pawnstar star wars ep. They are still shamefully promoting this fake. I HOPE no serious collector is conned into purchasing it.
makes me question all the other authentications" they have made over the years!
shameless.

Money > the truth every day. Stations like History, Animal Planet, Discovery, Travel Channel, and NatGeo are raking in millions promoting fake reality TV shows. They don't care about the truth, when the lie makes them more money. It's a damn shame what they've become.

kpax said:
I just saw a repeat of the pawnstar star wars ep. They are still shamefully promoting this fake. I HOPE no serious collector is conned into purchasing it.
makes me question all the other authentications" they have made over the years!
shameless.

All of their appraisals are grossly inflated, and all of their offers are horrendously low ball. They have zero credibility IMO.
Not to mention the fact that all their "appraisers" are their cronies from the Las Vegas area.

RPF PREMIUM MEMBER
They re-created their pawn shop interior on a studio stage and film most if not all of the show there.

It reminds me of Storage Wars. The same few people were always finding amazing sh-- in storage sheds. Staged. I used to frequent an action figure collector's site and one of the members loaned them some rare Mego figures for an episode.

kamandi said:
They re-created their pawn shop interior on a studio stage and film most if not all of the show there.
Click to expand...

I assume because, as anybody who has ever been in a real pawn shop knows, pawn shops are typically cramped, cluttered places filled with piles of garbage and one or two tiny treasures buried among them. This is neither "cinematic" nor a location that a cameraman would find to be ideally "camera friendly."

My uncle got smitten with these kind of shows, and started his own pawn shop, which he kept neat and tidy, with a significant portion of his stock kept in the back. It didn't look like any other pawn shop I'd been in. It looked like he put it together to look like it does on TV, where it's idyllic and camera friendly. I tried helping him out by selling a few of my old prop replicas through him, and they always sold well. Unfortunately, his little venture didn't last long.
Last edited: Jun 29, 2020

Lol. A few years back I saw Dave Hester trying to sell overpriced vintage Kenner figures at the Long Beach Flea. Looked at the prices and laughed very loudly as I walked away. Enjoyed the **** out of seeing him ‘slumming’ it still being a shitbag.

kamandi said:
They re-created their pawn shop interior on a studio stage and film most if not all of the show there.

It reminds me of Storage Wars. The same few people were always finding amazing sh-- in storage sheds. Staged. I used to frequent an action figure collector's site and one of the members loaned them some rare Mego figures for an episode.
Click to expand...

I have been on the 'real' location, and its surprising to me how much of it is actuality filled with merchandise for Chumlee. Also yeah most/if not all the people in the background on the shows are actors. And the price is always decided beforehand, and its set via casting calls for good items too. I also find the staged 'dramatic'/non buying/selling things to be especially atrocious in terms of how fake and poorly acted they are. Especially as we are supposed to believe that Chumlee/Cory constantly do things that would get them fired in an instant in any real business. (Like Chumlee using his bosses credit card to go buy a hotel room in vegas so he can order room service and search through quarters.)

it's entertainment first for sure. Nothing real about reality TV.

No truer words have ever been said.

I had a friend who bought some beachfront property down in Nicaragua. They had to wait to move in, because the show Survivor was being filmed there. The producers were concerned that if someone turned the bathroom lights on, it would blow the shots at the tribal meeting at the end of every show. The film crew used their house & swam in their pool. A few years later, they filmed another season close to their place. My friend said they would chase away the locals, who would go out in small boats to fish for their dinners, because that would blow the TV illusion of it being in a deserted place.

My father ran a Pawn Shop for over 25 years, very clean and tidy as he's compulsive in that sort of thing. My very first job as a kid was accually disassembling and cleaning firearms for the shop before they went out for sale. However, a good amount of other pawn shops him and I have ever been to, throughout several states over the years, were very unkempt and somewhat on the dirty/mangy side. And of course everything was overpriced in a lot of them, and certainly very rare to see super valuable items (especially since the internet became mainstream, kinda like finding good deals at flee-markets these days).

Though, my dad's goal wasn't significant profit, his goal was to simply help people in need. Not many people like that these days. He's always been a huge inspiration to me and I couldn't be prouder to be his son...On the funny side though, I can't even walk around in public with him without being delayed countless times by people that know and see him to strike up a conversation for who knows how long, since a ridiculous amount of people know and like him, haha.

But I agree, pawn shops aren't really like that for the largest part, including ones we went into in Vegas some years back.
..Except the low-balling part, sadly. Sure profit is the whole point of a business, but dad and I'm sure many others didn't believe in screwing people over like they 'depict' on TV. So I agree completely with kpax, those kind of shows depict a false reality, not true reality.

RPF PREMIUM MEMBER
Call me crazy, but I think the Pawn Stars cross bar was milled from thicker metal. I think they milled the mounting block right out of the crossbar... as one T shaped bar of metal. Looks like the discs and crossbar were made to "suffice" what the gun looked like back in ANH 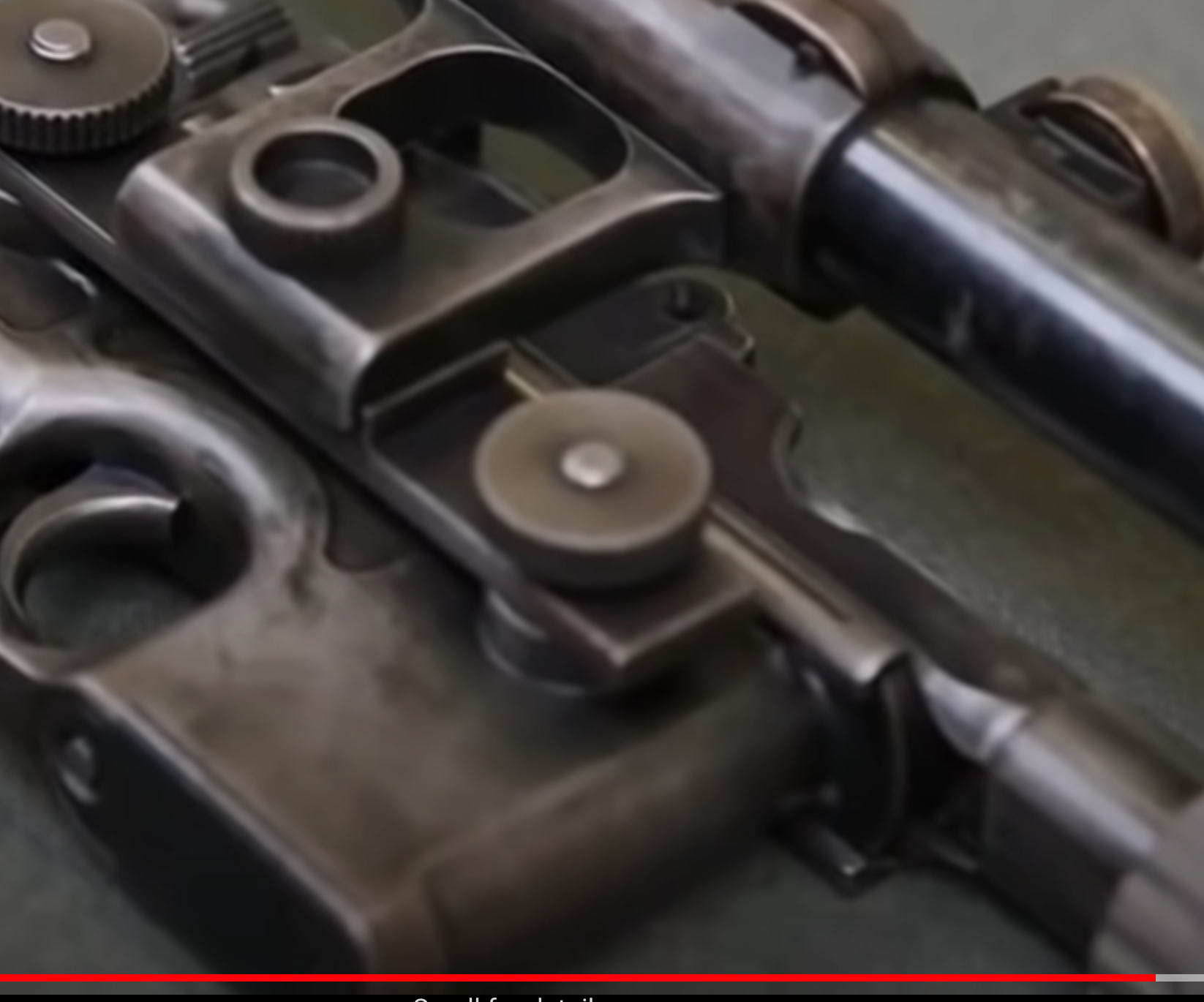 And the crossbar looks to be steel rather than aluminum.

I had compared the thumb screws and think they are larger as well. Have to look again.

According to Tony, they couldn't find the mounting hardware at all, so Carl newly made the bar, lugs, thumbnuts, and thumbscrew. Also, the barrel shroud was newly made from Carl's memory.

Thanks for the info which seems to confirm what I/we thought.

If it’s a barrel shroud snd not an actual rifle barrel like the NR then he copied the DEC design. The scope mount cradle is not accurate to the HERO and the FH is not vintage either.


Nothing is original except for the scope and possible top rings.

The FH is vintage. It was the only one they had left in the shop, and was so badly rusted it had to be bead blasted and refinished.

I don’t think I believe that.
The PS FH has straight knurls with round ends like the first replicas made, - not the bullet shaped knurls on the original or other vintage I have seen. Maybe others know more or better.

I think if it was badly rusted and bead blasted it would end up looking like that. It would be very soft and rounded looking. 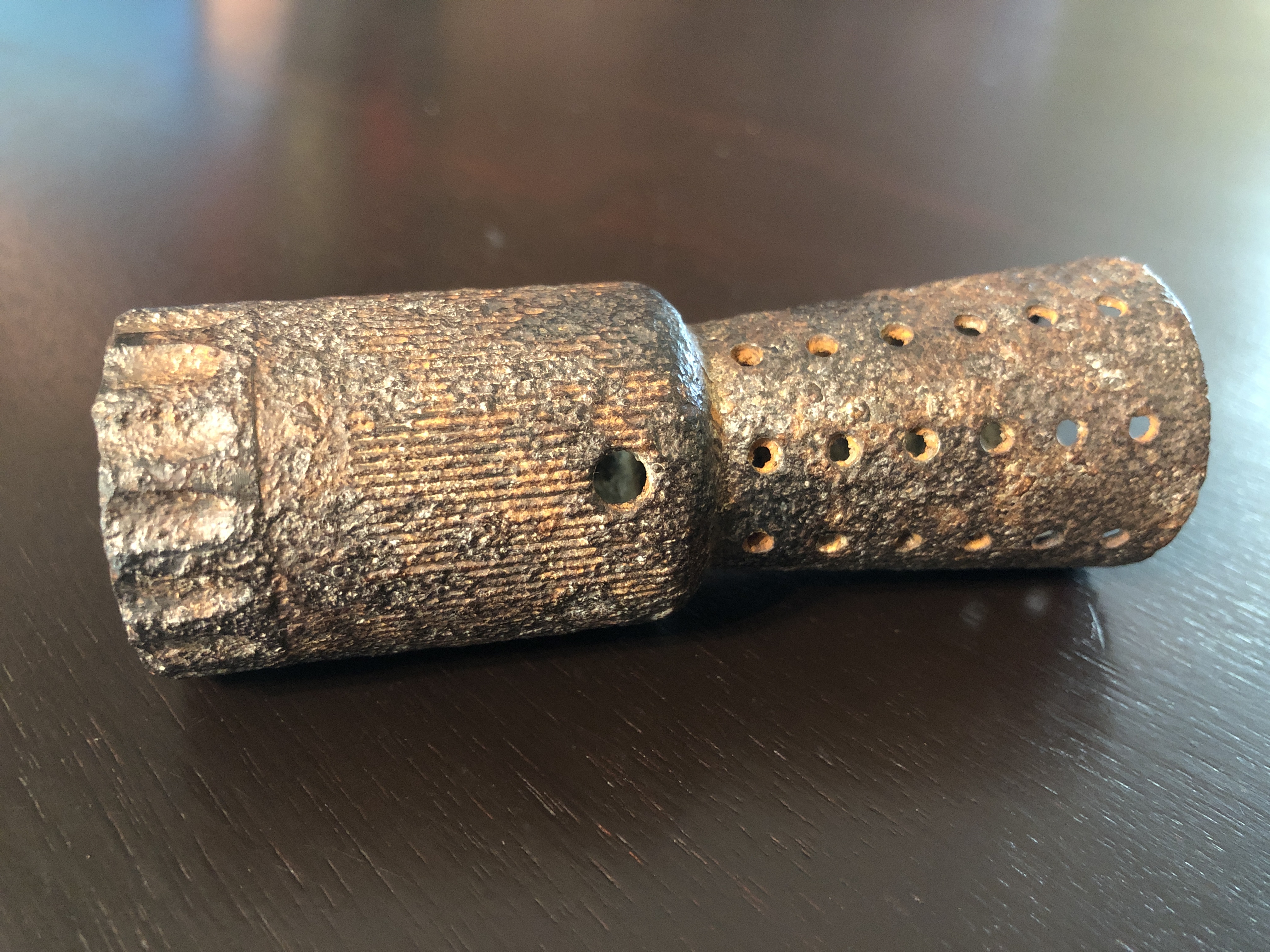 RPF PREMIUM MEMBER
id love to get a set of those knobs and do a replica of this pawn stars blaster... i collect weird sh2t like this

ToddsCostumes said:
The FH is vintage. It was the only one they had left in the shop, and was so badly rusted it had to be bead blasted and refinished.
Click to expand...

Thanks Todd - did they mention repairing the scope cradle/mount?

I'm curious if the early flash hider replicas were based off a version of an MG81 that had round scallops instead of bullet ones... woulldn't be the first time, there are Obi Wan boosters with thick fins, thats how Roman designed his

Today at 4:28 AM
drftfan
D
B
Stormtrooper Helmets on Spikes

Yesterday at 9:18 PM
bigkidbiggertoys
B