RPF PREMIUM MEMBER
So, supposedly the original Han ANH blaster is going to be on Pawn Stars

In a special 'Star Wars'-themed episode of 'Pawn Stars,' Rick takes a look at an iconic prop from 'Star Wars: Episode IV — A New Hope.'

RPF PREMIUM MEMBER
Wasn't this piece dismantled and returned to Bapty? Weathering doesn't match anything we've seen before either.

Seems to be a replica.

All the add-on parts are replicas. I've no reason to think the base pistol is the real one either. All signs say no.

RPF PREMIUM MEMBER
So many of these supposed props turn out to be just replicas.

Whoever get's it has more money than I do.

He doesn't even touch it (in the clip)! How does he know it's genuine, or anything else, if you don't handle it?
I will watch tonight though.... & laugh.
P

Sounds like this was put together just to get viewers and cash in on the release of the new movie.
There was zero research done....at least not in this clip.

RPF PREMIUM MEMBER
Definately fake. The mount is missing the dovetail and the slope when it connects to the cradle. The flash supressor is a replica that doesn't have the correct scallops in the back (I'm thinking one of Todd's earlier versions) And I don't think it's the correct version of the Mauser, it's a c96 to be sure but the hammer looks like an earlier model from the ANH prop. 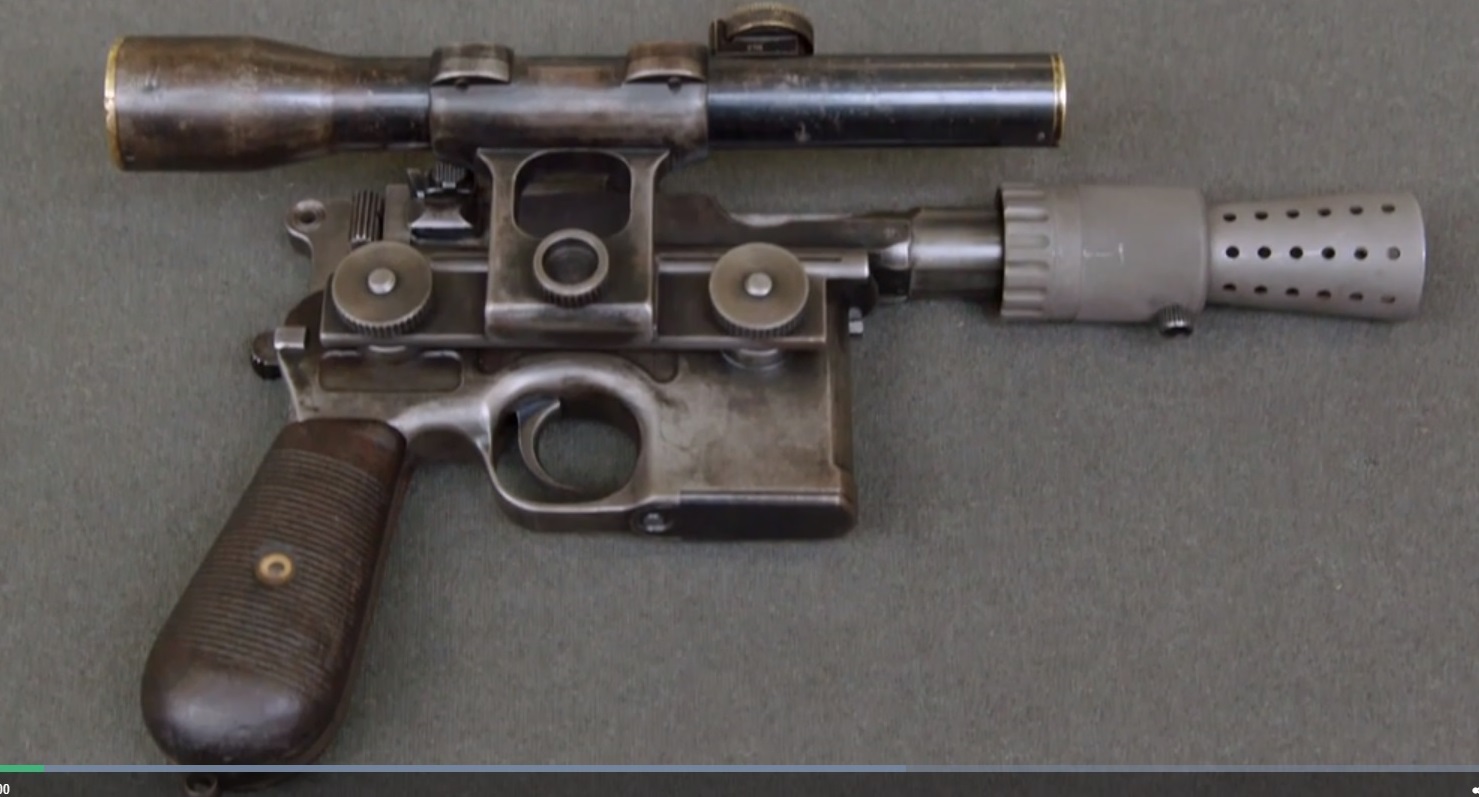 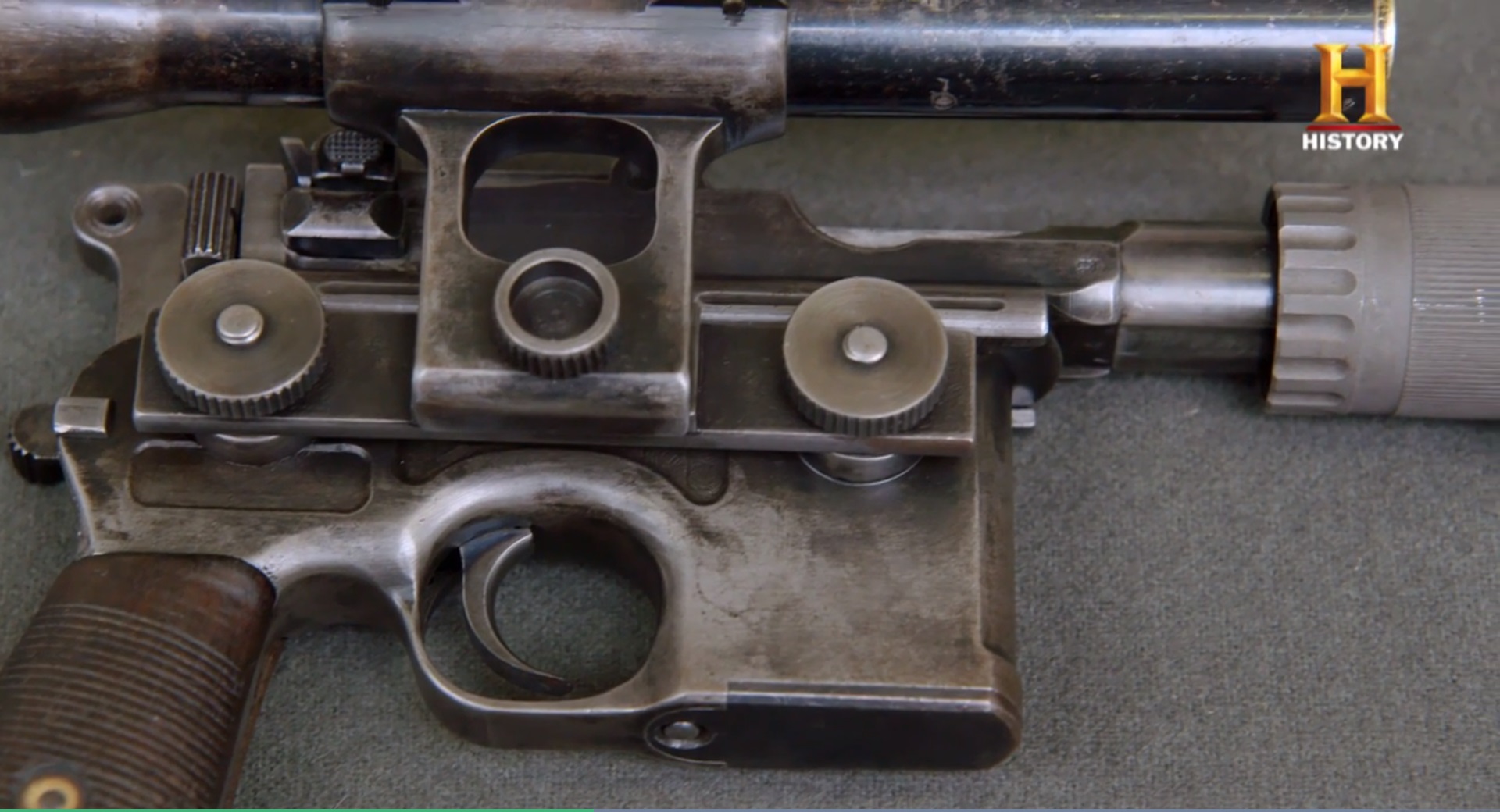 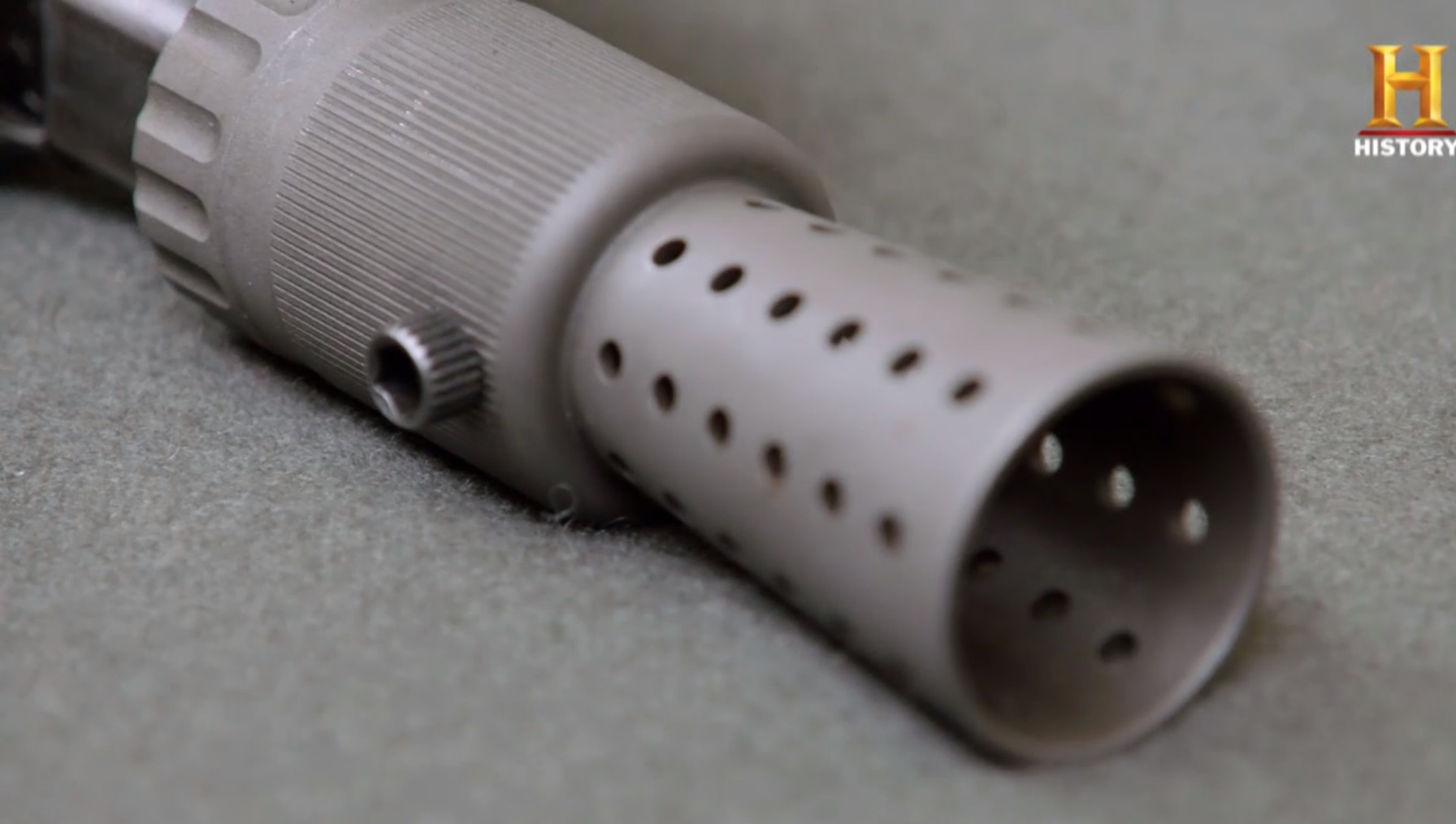 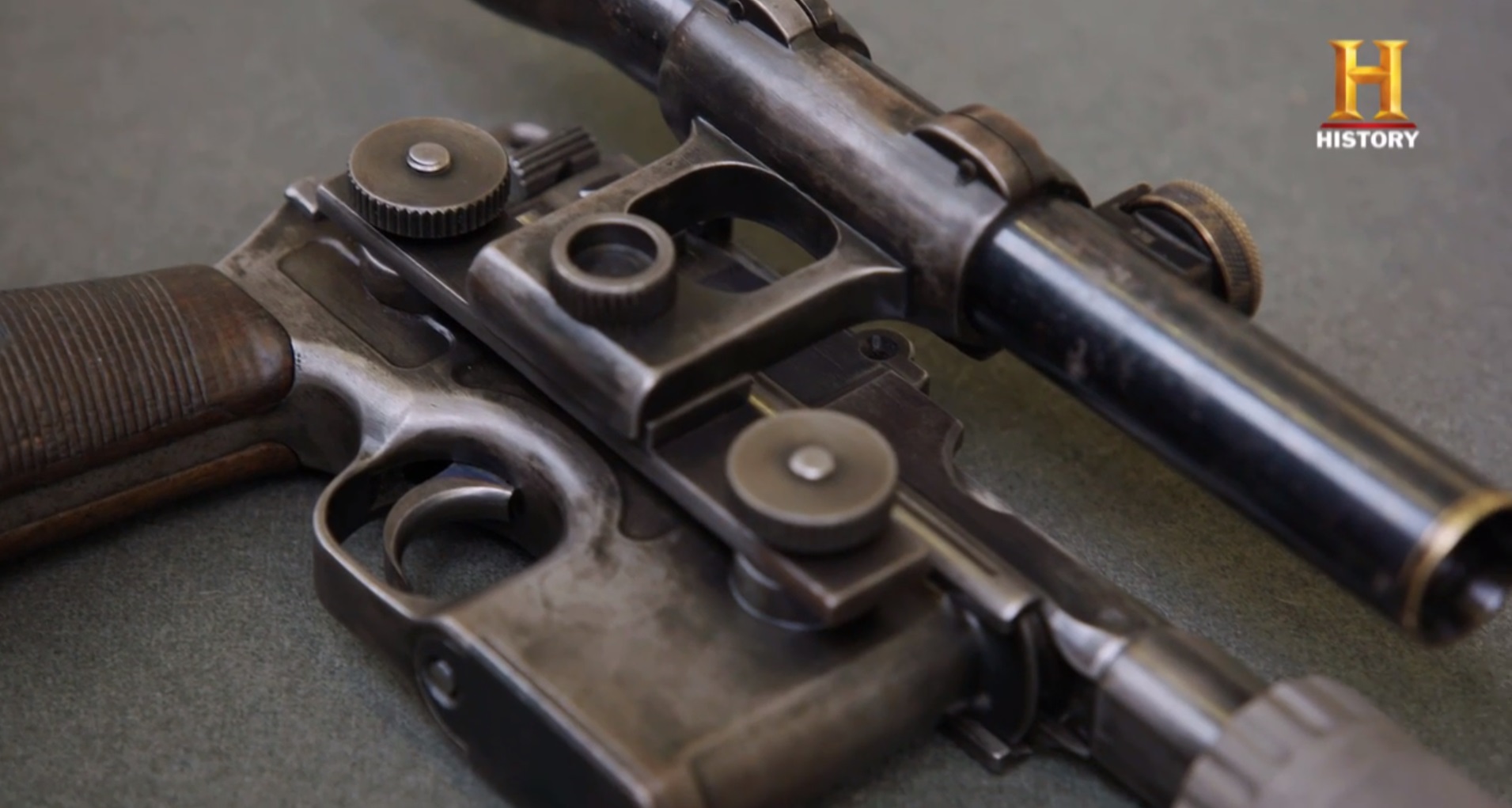 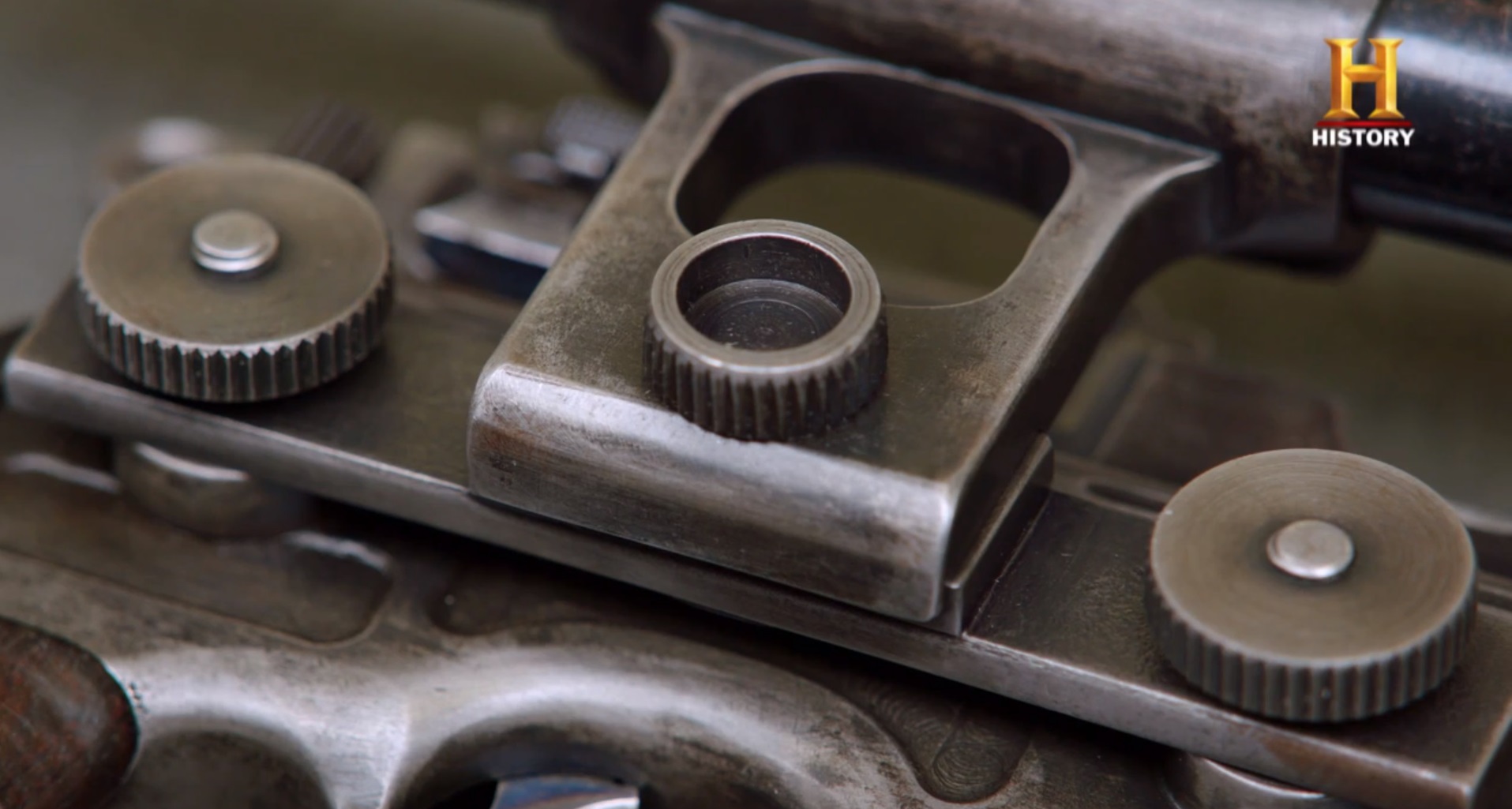 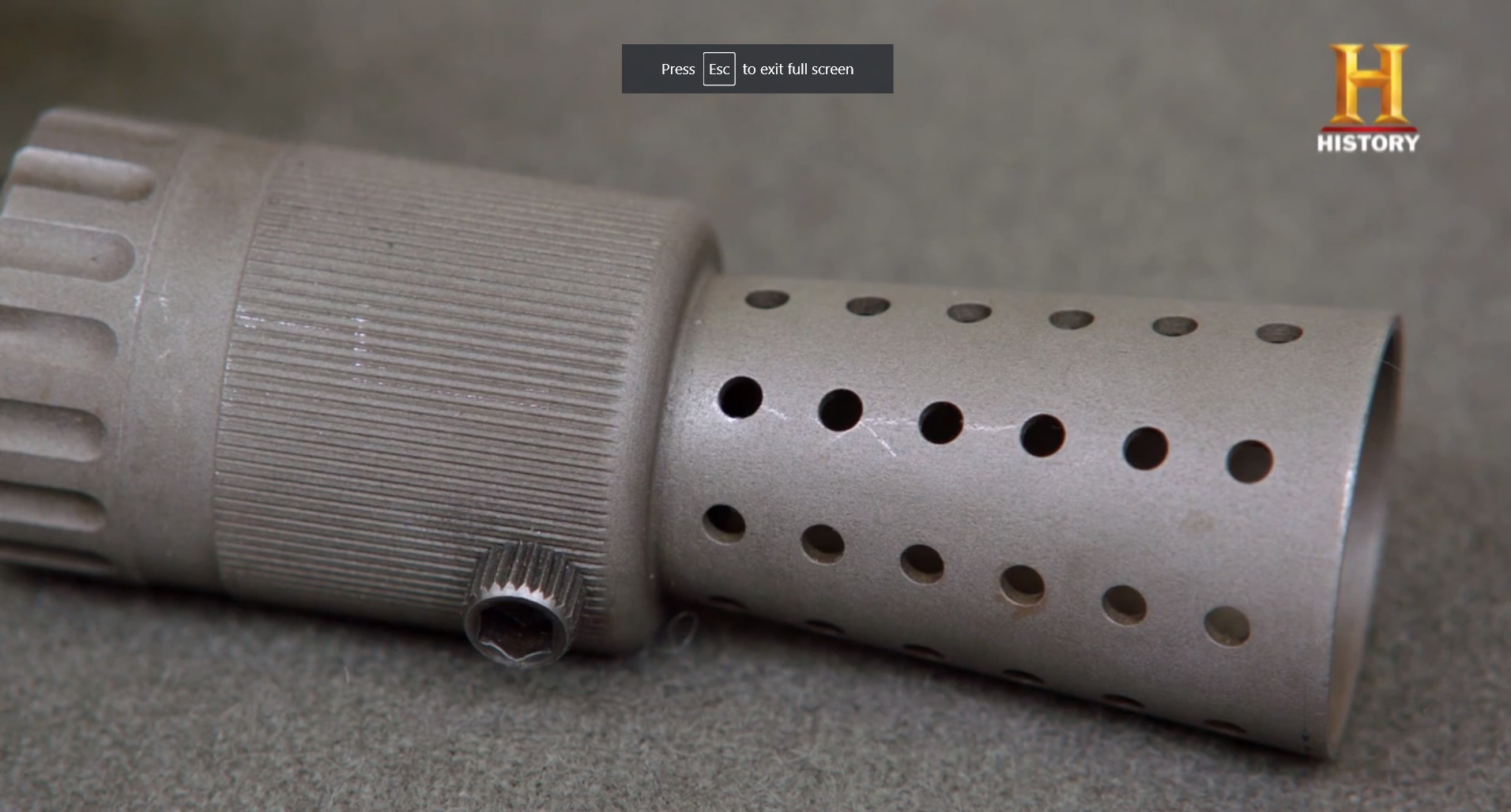 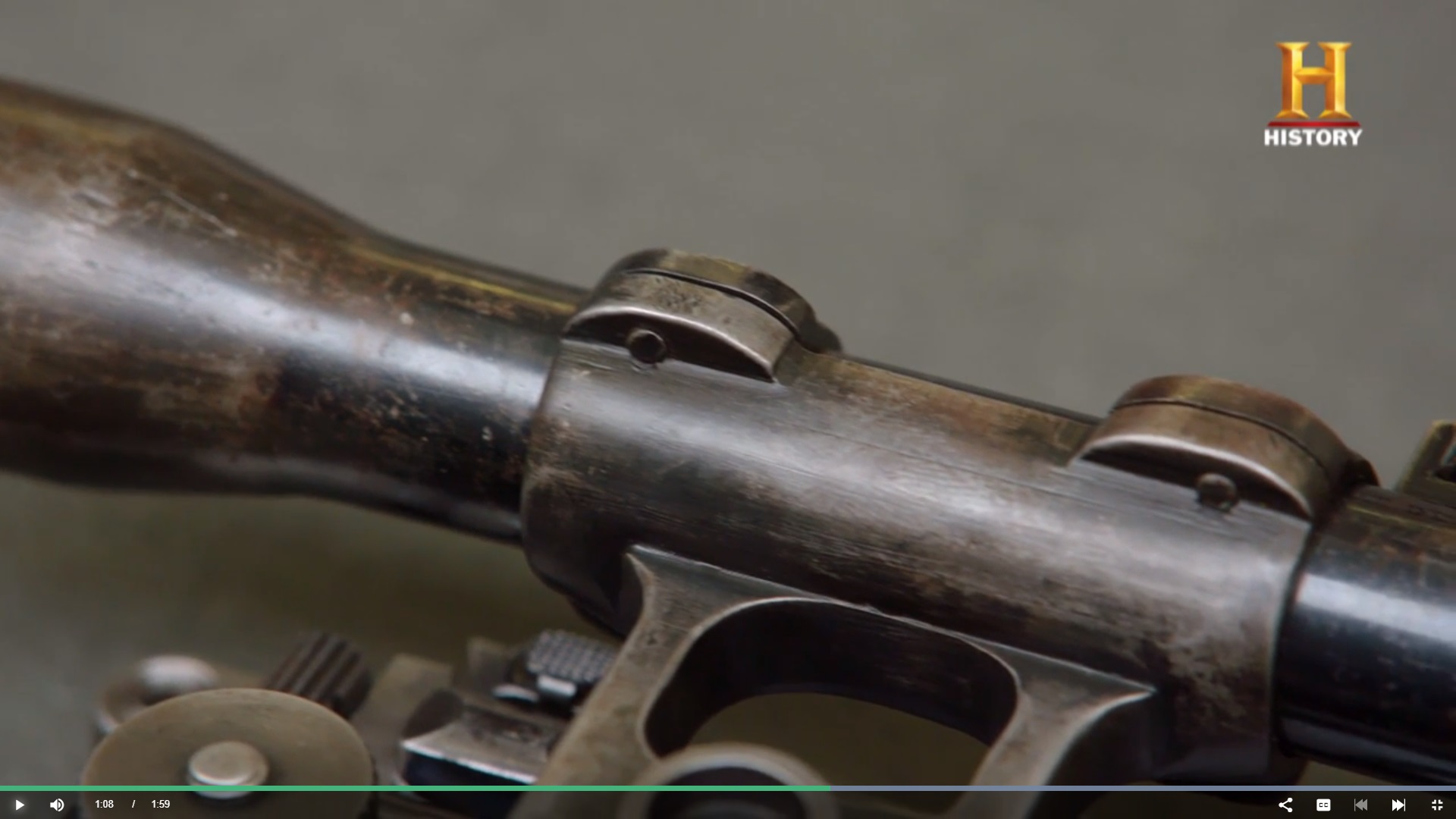 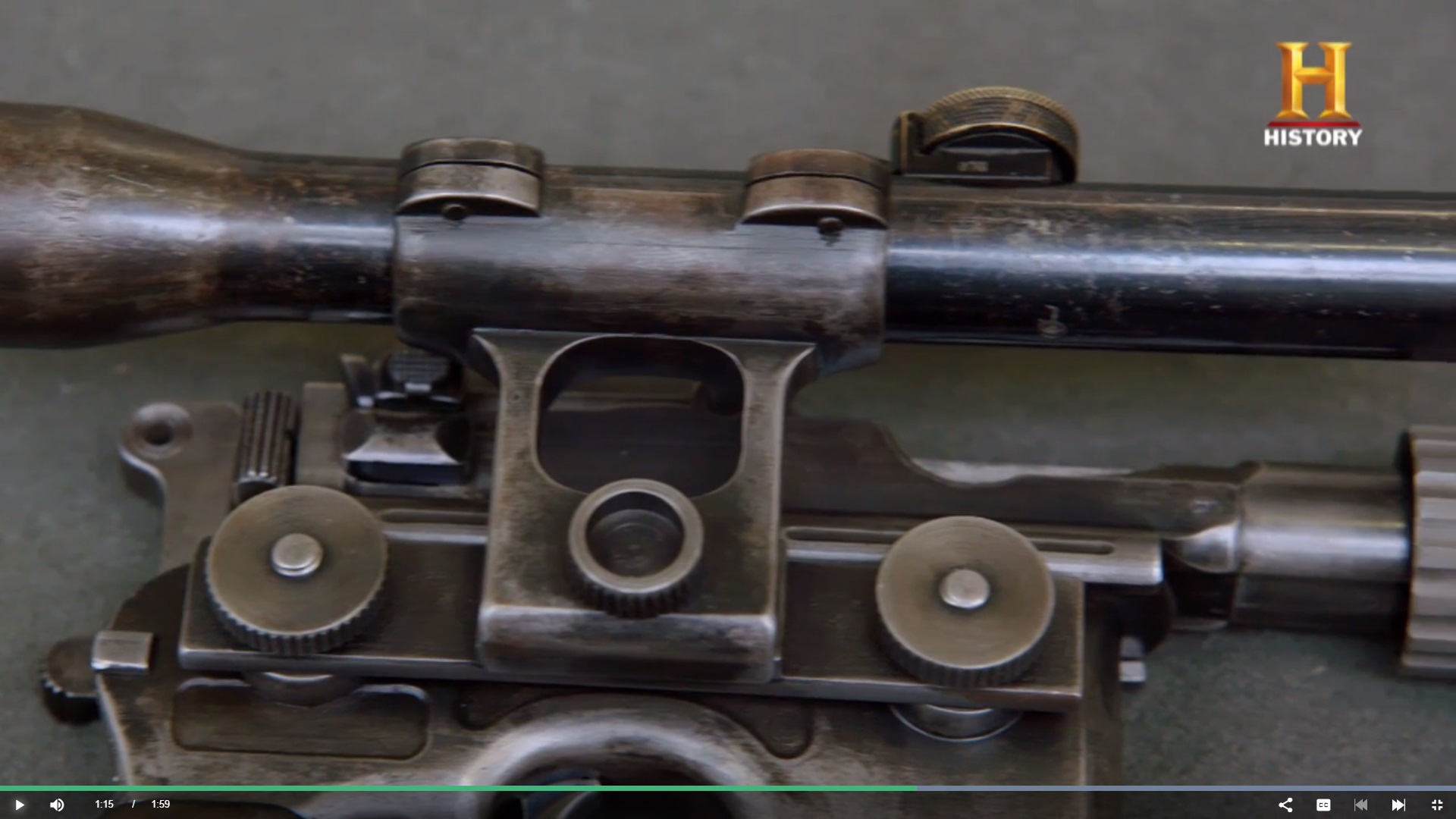 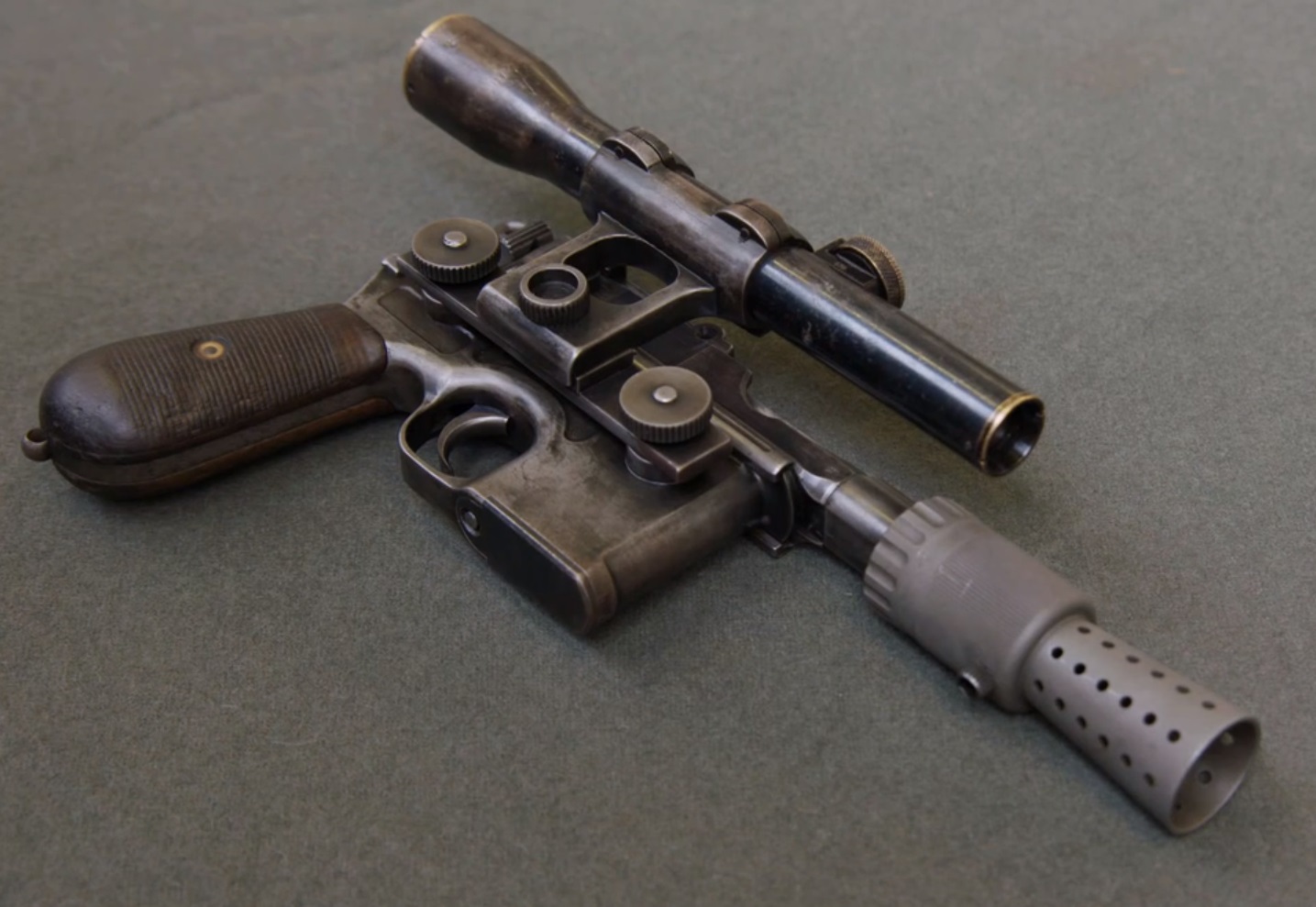 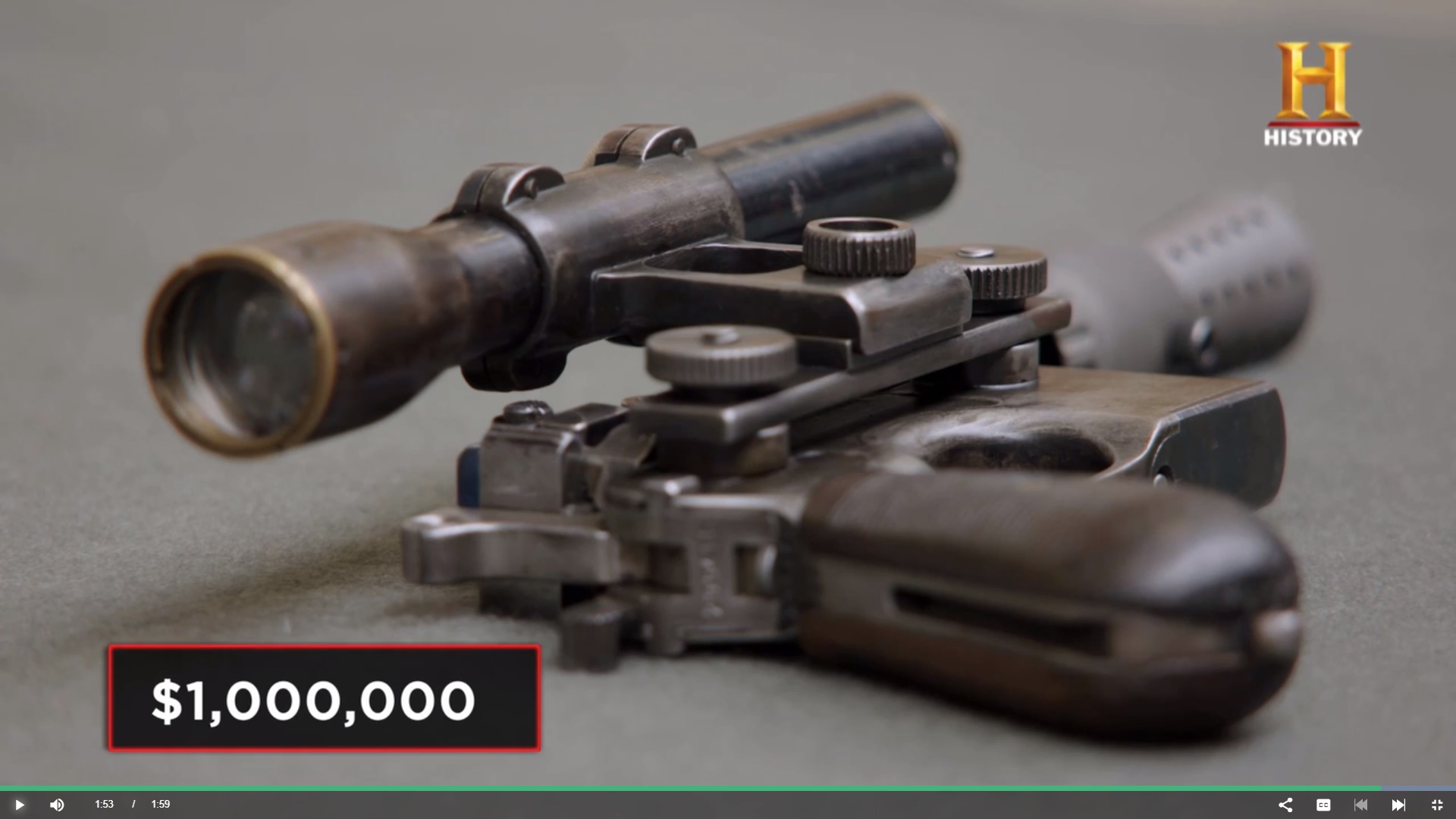 How many guns did they make for Han to use for the first movie?- I know they did have budget restrictions, but surely there were multiples of an essential prop in case there was an accident or for stunt purposes...

As far as anyone knows, the firing props in the UK were rented from Bapty's and the stunt blasters were casts - as stunt props usually are. Then one was cobbled together for a close-up, which was shot in the US: the "Greedo Killer". If this blaster had existed in the US, then this would probably have been the Greedo Killer, but it isn't.
We know the Hero blaster was cast, and that casts (in various configurations) were worn by Imperial Officers and used by Han Solo at least in subsequent movies.

The "bull-barrel" is a unique mod to a specific Mauser C96 upper, and I doubt that Lucasfilm would have replicated that by modifying a real C96. they usually didn't go to that level of detail.
Some owners of authentic Star Wars movie-props that are missing parts have added similar parts (authentic or replica) to them to make them look like they once had been, but I don't think many collectors would modify a genuine movie prop in that way because that would lessen its value.
Last edited: Dec 23, 2019

When it comes to “screen-used” props up for sale, I always know to come here, because it’s usually a fake and there are hundreds of people here that can explain precisely why. If the episode doesn’t debunk it as not film-used, someone is going to be throwing a lot of money away on a merely decent-looking replica. It reminds me of the Kurtz lightsaber debacle.

RPF PREMIUM MEMBER
Pawn Stars doesn't care if it's fake and neither do the producers of the show.

THEY KNOW IT'S FAKE.

It's all for publicity, it's a stunt to get viewers. It doesn't mater if PS buys it or not on the show because as soon as the cameras are turned off PS will give the prop back the the guy that brought it in and then they'll tell him 'thanks' for helping them cash in on the topical Star Wars craze/interest from casual-non-prop-collecting-couldn't-care-less-fans.

RPF PREMIUM MEMBER
I studied this prop for months when I built mine. It's missing pieces and looks nothing like the screen grabs and doc pics I used .

kevin926 said:
I studied this prop for months when I built mine. It's missing pieces and looks nothing like the screen grabs and doc pics I used .
Click to expand...

That's because it isn't an original screen-used or production-made prop.

It's a replica, and Pawn Stars know it's fake. It will never look like the original prop because it isn't, it never was, and it could never be.

RPF PREMIUM MEMBER
I also see no evidence of the T-track or pushrods on the top of the bull barrel, and cant help but notice we never see the other side (mystery disc accuracy would be a biggie). Hate this kind of disengenuousness.

RPF PREMIUM MEMBER
The show just isn’t even a joke... the actually whole shop is...

Had a few friends check it out.. like walking in a flea market...

RPF PREMIUM MEMBER
I need them to circle back around with Chumlee to get his opinion on this.

ALLEY said:
I need them to circle back around with Chumlee to get his opinion on this.
Click to expand...