Hello to all,
I'd like to present to you my own HAL 9000 panel project and research, based strictly on the panel shown in Kubrick’s 2001: Space Odyssey and on some facts and research from this forum (especially on the Nikkor lens. Thank you all!). please excuse my bad grammar

Edit : During my research I came to the conclusion to refer also on the Prototype HAL
Except of the panels height and the replaced speaker grid, all other dimensions including the worn out “HAL | 9000” label do fit the dimensions from the screen-used panel.
Besides:
- The panel was found in UK
- Along with the Brain Room key
- Was marked as authentic
- Sold for £17,500/$27,615 (seems to be authentic enough for me ;D)
- -> see auction

#UPDATE:
I tried to find the original audio device from where the grid was taken by following these criteria:
____________________
The grill probably belongs to a radio (maybe a transistor radio) or to another audio device such as a speaker, walkie talkie, cassette recorder... etc.

Besides the measurements, I have following information:

The grid is corrugated (horizontally or vertical and rotated by 90deg), not smooth.
It is made of thin sheet metal and it seems to be bent on the edges.
There are 22x18 holes
The holes are arranged rectangular (maybe due to the corrugated surface).
The holes are on the top of the "waves".
and arranged in a straight pattern (not shifted)
The holes are flush with the edges.

After many hours/days of research on the internet, I nearly saw every transistor radio from 1960 to 1964 ;D but no luck finding this damn grid :\

IF YOU HAVE SEEN AN AUDIO DEVICE WITH THIS GRID, PLEASE CONTACT ME DIRECTLY!! :lol

#UPDATE:
See where I get my hands on

(BTW: The red dot is caused by the internal red photo filter -> no red light behind it)

A very nice gentlemen, who followed my research here on RPF borrowed me his original Nikkor f=8 mm fish eye lens for a few days.
At this point, I’d like to thank him a lot for giving me the honor and great opportunity to take some measurements. Thank you very much!

…I still wonder why he wasn’t worried about getting the box back with the lens replaced by a brick ;D

Anyway, I carefully took precise outside measurements with a digital sliding caliper and built the complete lens parallel in Solidworks (I even counted the little ribs/knurling^^ …319 ribs btw~). Now WE can review the dimensions anytime on the 3D model.

The file is an e-Drawing.exe(.EASM) file it already contains a to-go-3D-software,
so you don’t have to install any software on your PC.
Just run the .exe and you can turn the 3D-model around~
-make sections
-take measurement with the Ruler-Tool
-hide/show components
- Enjoy~


_____old post________
Unfortunately I cannot afford a real NIKKOR lens and don’t know anybody who owns one, so that I could get the exact measurements (accurate to two decimal places^^), but I found some blue prints and tech. data on the internet.
I added missing dimensions and details with the method mentioned above and by comparing it to a lot of pictures of the original lens.

(If someone has got or could get precise measurements, I’d really like to update possible inaccuracies)

Some marked dimensions and the setup of the three rings are just proposals or the way I manufactured them. (For example: The splitting of the housing in outer and inner ring)
That’s also why the inside components of the lens are missing (either I didn’t have any information or because I mainly used components, which I had already lying around … see below)

#UPDATE:
-I measured the engraving and the distances between each word on the curved surface of the original NIKKOR lens.
-Put it in a SolidWorks drawing and read off the radian measures.
Then, I took photos of each word on the lens, made some lens correction to reduce the distortion and scaled & repositioned them on the circumference of the lens-ring (with Photoshop)

You can download it here and print it 1:1, cut it out and put it around your lens~

It seems that the prototype panel from the auction, fits pretty well. So I assume this panel is authentic!)
I put the picture in my drawing and for my surprise the panel width fit perfectly, after scaling it.
But I recognized, my label dimension where wrong! #Drawing updated 26.06.2011
So here my update:
(Notice: The vertical bar is not in the panels center)

Since I decided to refer also on the HAL prototype panel, I took a closer look on the details and I noticed that the black plates surface has a fine grain.
To make sure I checked it in my HAL screenshots from the movie, by lightning them up.

You can see there are different shades of black between the HAL-label and the plate and it seems to me, there is some kind of grain noticeable (especially on the “Brain Room” screenshot).
Based on this comment

GKvfx said:
… It (the prototype panel) followed the same construction techniques, has an original decal, but is not the actual (final) size. …
Gene
Click to expand...

I’m pretty sure the panel has got a black anodized, brushed aluminum surface

Nikkor lens replica:
->Housing:
I lathed the outer and inner ring out of plastic and glued a prepared big cable tie around the outer ring to imitate the knurling (it was not possible to knurl it directly into the plastic).

Inside of the lens housing:
I used a big d= 64mm rubber pipe gasket from a DIY market.

->Lenses:
I used two lenses one from a magnifying glass, which luckily was exactly d=69mm and nicely curved (nearly as original) and a smaller, flatter one inside. Both lenses are pressed tide into their housings.

->Aluminum ring:
Simply lathed out of aluminum. It’s put on to the knurled part of the outer ring and pressed into the panel.

->lathed bushings for the LED and the smaller lens. Both stuck into the rubber pipe gasket.

->Shiny ,dark transparent plastic ring (lathed)
(put behind the lens for a glossier and darker look)

Which one is the original lens,hee ?! :lol

Cheep camera/no filter -> couldn’t take pictures directly from above.
(the LED is too bright)...looks better in real life~

->Wood Grain #update 20.07.2011
I took a thin veneer with a fine wood grain,
glued it on the wood plate,
cut out the hole and painted it black (semigloss)

->speaker grid (3D-printed) #update 31.12.2011
Well, since my intesive search for the orignal speaker grid stayed fruitless, I decided to remake it in 3D and print it on a 3D Printer.
Painted with custom mixed antharzit metalic paint.

->Milled aluminum trims with countersunk holes for 8 screws on the left and right trim and 4 screws on top and bottom. #update 25.06.2011

I couldn't resist to take some pictures from my panel with the original lens on it, while I had it borrowed at home.

Here a sneak preview (not finished yet !)
(I've only made the grid a little darker with Photoshop. Nothing else was edited!)
-I switched to the internal red lens filter & put a white light behind the lens

-> When you look directly at the lens you'll just see a little red glowing dot,
but when you take a picture of it, you'll get this smoth yellow to red glowing that looks much bigger,just like in the movie !

More pictures of my finished HAL:

All blue prints / drawings /3D-Data are for non-commercial use only!

WOW!! Now THAT is what this forum is all about. Top notch research effort coupled with exceptional talent produces a VERY nice replica prop. Kudos to you, sir. Reminds me of the old days of the RPF where this type of thing was common place.
Just noticed that this was your first post. Welcome to the RPF.
L

I think I'm the 4th person to say this.. but WOW!! That is some serious research you've done! And it's just Wonderful that you were kind enough to contribute all of your findings to the people of the RPF like this...just Wow..:thumbsup

And Welcome to the RPF! :cheers

Bravo! I'm floored by the quality of your work thus far.

As for the speaker grill, perhaps drill the holes with a CNC milling machine?

Ho-leeee mackerel. That is some fantastic work!

I've been looking at a lot of vintage walkie-talkies lately; perhaps the speaker screen was (also) a found item? It looks to me as if it's "corrugated" (horizontally), not smooth. For what it's worth.

ETA: These are from a current auction ("vintage general electric walkie talkie"): 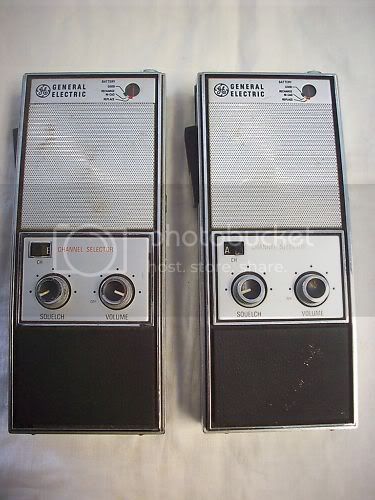 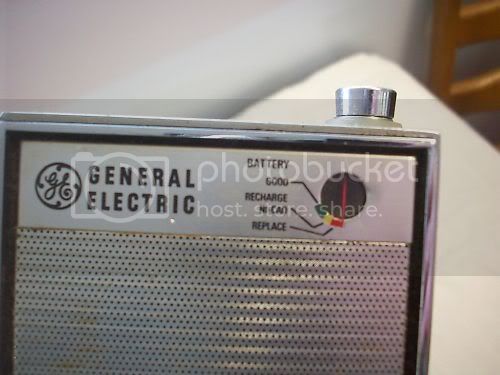 Your efforts are much appreciated, thank for posting this! Considering tackling this myself instead of waiting for the sd version.

Thanks for the nice feedback =)

Great hint with the vintage walkie-talkies MFP !
I agree, that it looks like the speaker screen is corrugated. Maybe due to the manufacturing process, where the holes in the thin sheet metal have been blanked out.
We should definitely do further investigation on that.

... I have the opportunity to print it in 3D (thats what I meant by "sand casting"^^)
so I think I'm going to create a 3D model, that imitates this perforated sheet metal-look, as long as I can't get my hands on more authentic material.

Does someone here have the "HAL|9000" label graphics in good quality?

-> UPDATE: See my progress on the panel (first post)~

Hmm ... seems like I missed something here on RPF.
I just saw this thread:
The Definitive 2001 HAL 9000 Panel Replica
and I read through the latest post in the important threads.

Now I'm very interested, if any information or details came up, which I haven't mentioned so far? or if my dimension are corresponding to those SD Studios is using?
Could someone, who maintains an overview over all the facts, bring me up to date, please?
Seems like something is going on here in the background ^^

It would be great to have a collection or a list of the most proven facts on the HAL panel, because I'm burning for a panel which is as accurate as possible.

So I (as a technical product designer) am at your disposal to do 3D-work and drawings.
...I'm also interested in reproducing the Nikkor Lens with all the elements and correct lenses inside...just need the measurements~

EPS or PDF ...anything I can open with Photoshop is just fine for me
Thx a lot!

What a research you've done! :eek

Amazing job, really. I hope so see a run of this soon :love

It's these types of threads that make the RPF, THE RPF.

You can download the "[HAL|900]" panel logo artwork from
HAL9000 panel logo.zip
In the Zip file you find EPS and PDF, but use the EPS for importing it to Photoshop, though I would suggest printing it from a vector based application.
Last edited: Jun 25, 2011
S


AP 333 said:
->Lenses:
I used two lenses one from a magnifying glass, which luckily was exactly d=69mm and nicely curved (nearly as original) and a smaller, flatter one inside.
Click to expand...

I'm very impressed with how your lens turned out. It's good to see that a very satisfactory reproduction of the original lens can be had by using relatively inexpensive parts.

I have updated the label logo according to your updated dimensions and vectorized the "weathering" - makes it easier to replicate it.