First time posting here, but been a member for a while, admiring from afar.

Had a bit of spare time during the current craziness, so I watched 2001: A Space Odyssey and decided to try and make a HAL 9000 control panel to surround my Nest Thermostat. I've seen other people do it, and I've wanted one for a long time, so I gave it a go... but only used scraps I had laying around. It's not screen accurate, but it serves my purpose just fine.

Here's what I used:
1/8" plywood for the main body
1/8" 6061 aluminum square rod for the frame
0.04" 6061 aluminum plate for the grille
Craft foam for backing against the wall
Half empty can of Krylon black plastic spray paint
Gorilla Glue

The process was fairly short - I took some measurements off images I could find online, watched the Adam Savage and Peter Jackson HAL prop video a few times, then started cutting out the rough shape in the plywood with a sharp utility knife. I used snips to cut the aluminum rod, then used a sanding wheel for my drill press to shape the 45º angles for the corners. For the grille, I used a small table top CNC/milling machine to drill the holes in the aluminum sheet. (this was the most time consuming step) I then put on a number of coats of the plastic paint, sanding between each to get it fairly flat. On the last coat, I used some steel wool to approximate the look of the anodized aluminum surface on the prop, just pulling the steel wool up the face as softly, slowly, and straight as possible.

I masked it all off with painters tape, and glued each piece together basically one at a time, using more tape to create a bit of clamping pressure. To mount it, I shut off the power, removed the Nest and the mounting plate, which just has 2 screws holding to the wall. I traced the same holes to the wood, drilled them out, and that was enough to mount it securely. The foam on the back also stops it from shifting.

I'm still waiting to get a label printed, but I stuck the photoshop file I made over the final image to see how it will look when completed. It's a bit rough and ready, but the hallway now has a bit of character... a slightly homicidal character... but character. 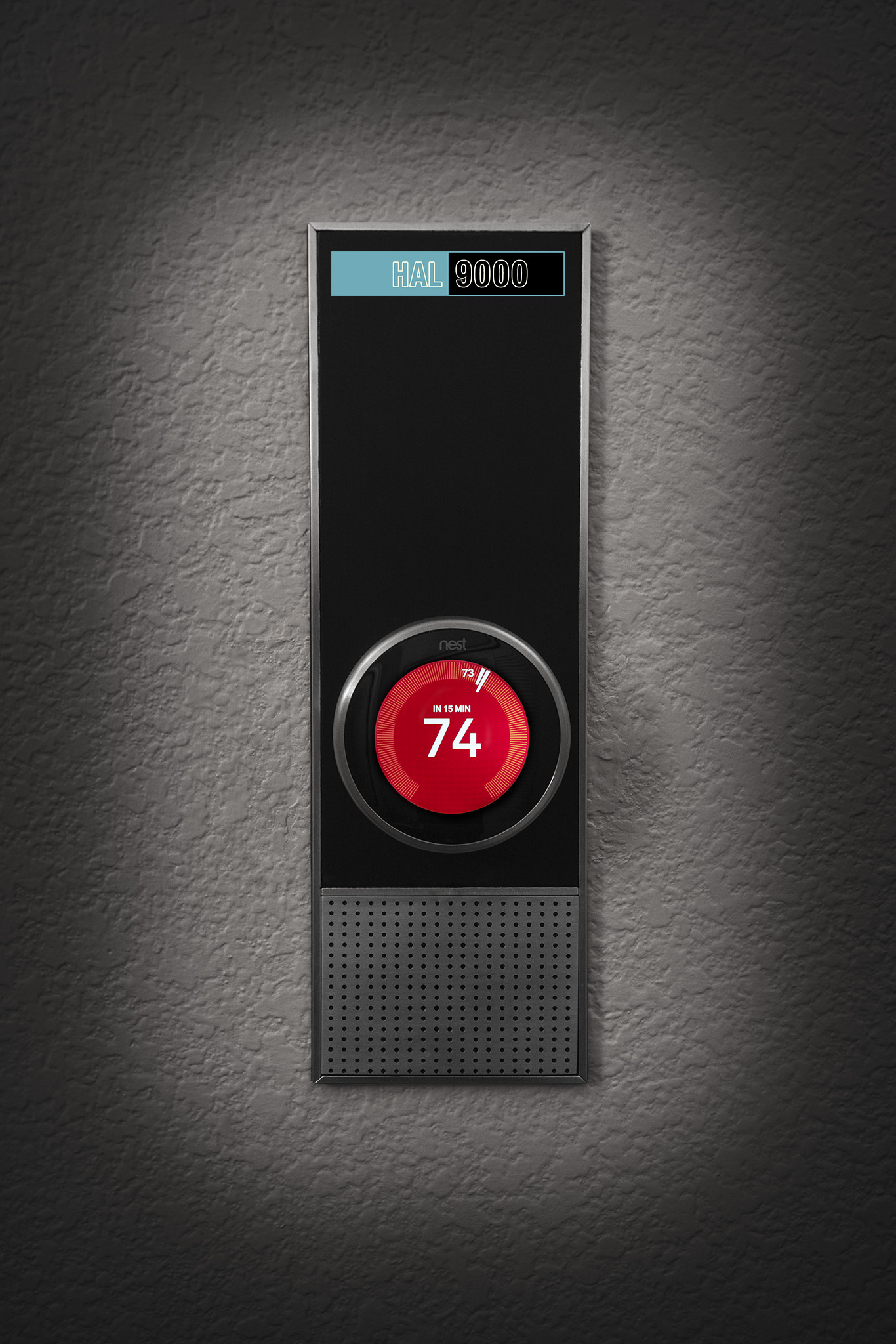 LTsmash1200 said:
Oh my God that's amazing. Great idea. I'm going to have to steal that.
Click to expand...

I love it! I can't imagine drilling the holes for the speaker grille by hand - that's craftsmanship!
J

RPF PREMIUM MEMBER
What an awesome idea, and great execution! 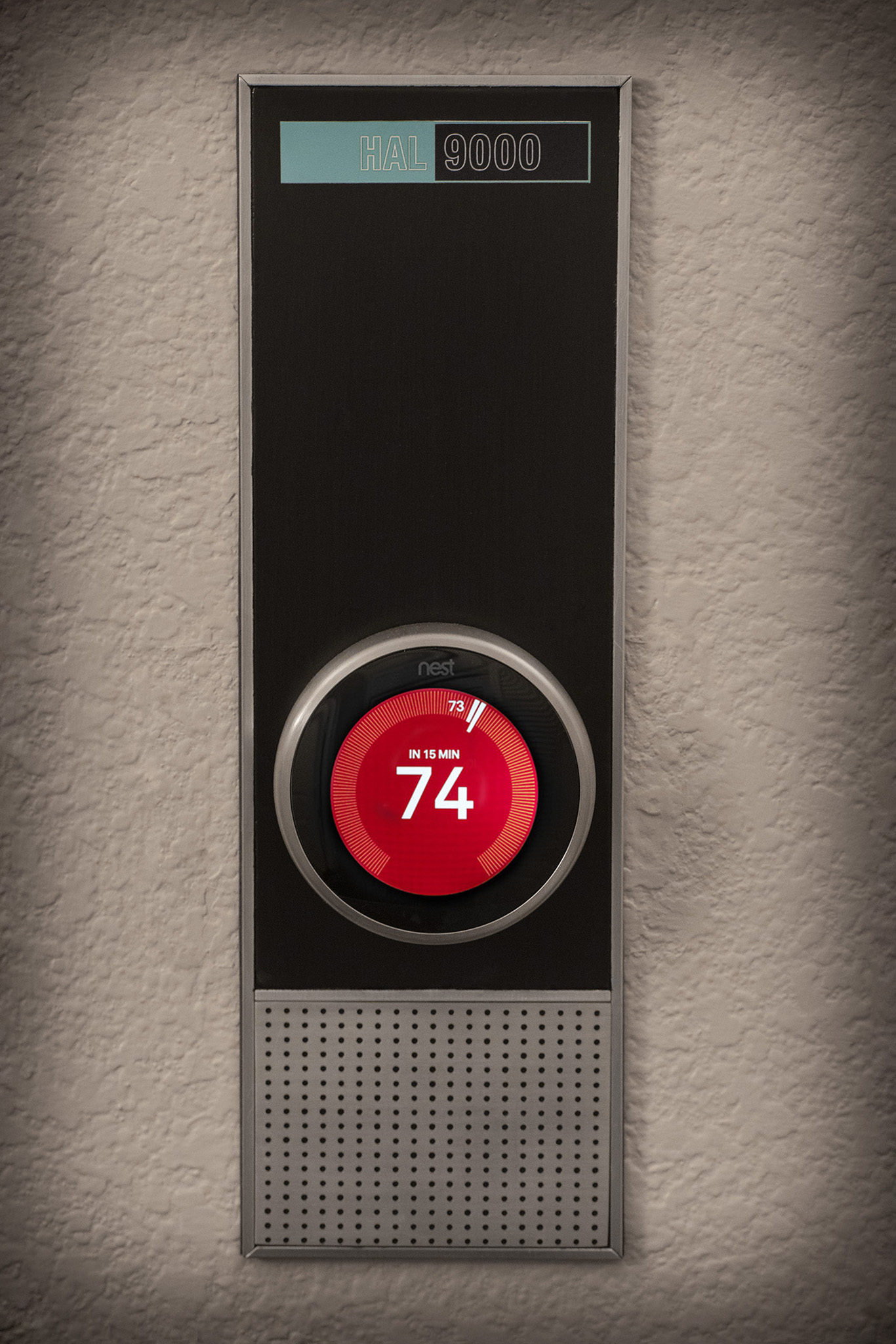 Hardly a necessary update, but I finally got a label printed. (It was photoshopped on in the previous pics) I didn't want to leave the house just for this, and don't own a printer, so I ordered a 5x7 photo print from Shutterfly, full of Hal logos. (Around $2 shipped) For anyone curious, I went with the matte finish photo paper, cut it out with a utility knife, and affixed it with 2 strips of 1/4" 3M 467MP adhesive transfer tape.

lukeiswho said:
..., so I ordered a 5x7 photo print from Shutterfly, full of Hal logos. (Around $2 shipped) For anyone curious,

I love that. That's how I do all my labels.

That is so great. I’d do that in a heartbeat, but I’m not sure it would go with the rest of my decor.

Grail Diary for only $34? Is this company using anyone’s photos for potential bait and switch?