It's so nice to see that there have been so many "2001: A Space Odyssey" related builds and discussions in these forums recently, including quite a few builds of the HAL 9000 face plate. And I have built one of those before, sitting on a 2-inch thick black box. With an IR motion sensor triggering an mp3 sound player module, it is able to play all of HAL's sound bytes from the movie which makes it a beautiful companion in my office.

Now, I decided to go beyond that and build a HAL 9000 unit that features some of the surrounding area from the movie set. In a previous thread (here), I compiled the different locations in which HAL 9000 face plates appear in the movie. 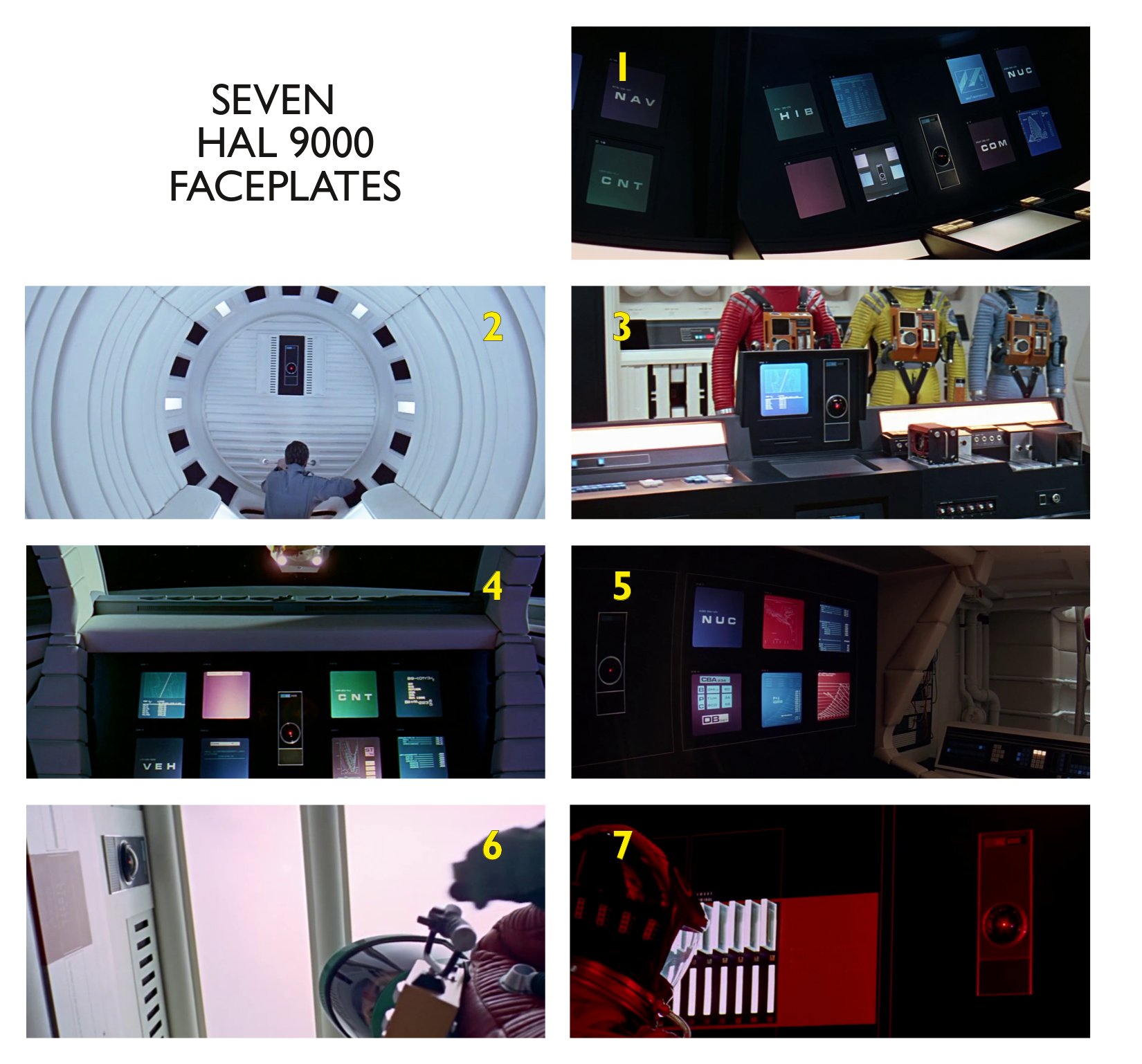 Of course, #1 is the "classic" version that everybody remembers first. However, it would require eight computer screens plus (at least) four Raspberry Pi 4's to control them. Such a build would not only be rather expensive, but they would also occupy a huge amount of space. The same applies to the units #4 and #5.
Personally, I find unit #7 in the memory room really tempting. With the 38 illuminated memory modules it would be an impressive prop - but again, it would be huge, and probably expensive to build (in particular the 38 mechanisms to move the modules).
Unit #6 features only the face plate - and this is somehow what I already got from my previous build.

So, what remains are unit #2, with its white frame sitting in the rotating hallway, and unit #3 in the pod bay room with its single computer screen that displays the recognizable images from the movie. These are the ones that I am planning to build.

I am starting with unit #2 from the rotating hallway. That should be some rather straightforward wood work.
Afterwards, I will approach unit #3 from the pod bay room. That one will require some real programming to produce the images on the computer screen.

Disclaimer:
In these builds, I will only focus on the surrounding area. In my previous build, I made four HAL units, somehow assuming that I could find somebody locally who would buy one - but I was wrong. 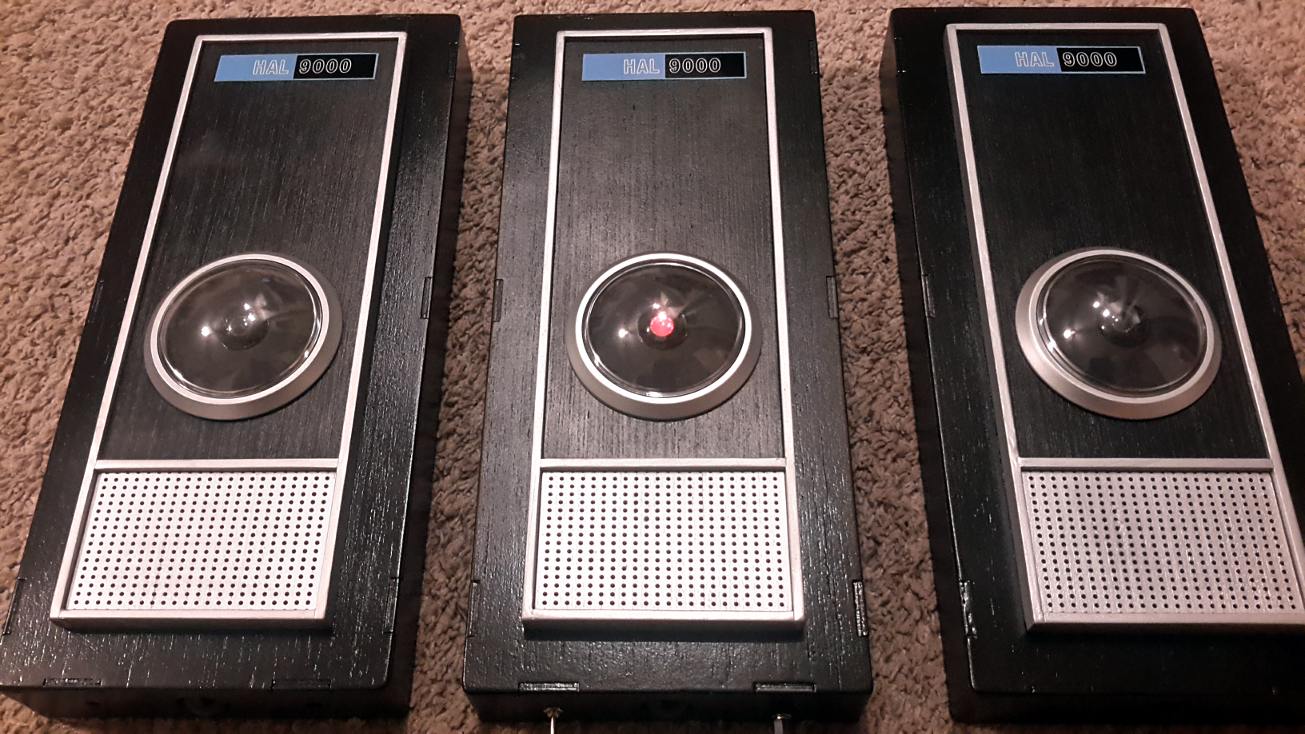 So, I will reuse two of those for this project. I know very well about their shortcomings, including the poor approximation of the eye (the 100 mm push button) and the front that is too glossy. When I build those, I was rather happy - but now, inspired by all the ongoing discussions. I think these could be substantially improved. But that is something I keep for later.

I’ve thought about doing surrounds as well but am limited by display space considerations. Still in my mind I’m keeping an eye out for small screens that would let me pull off a 1 or 4.

j_holtslander said:
I’ve thought about doing surrounds as well but am limited by display space considerations. Still in my mind I’m keeping an eye out for small screens that would let me pull off a 1 or 4.
Click to expand...

Yes, if it wasn't for these space considerations....
From a comparison to the HAL face plate, I estimate that the screen in the pod bay room (which is probably the same size as those in #1) has a width and height of about 8 1/2" or 9", corresponding to a diagonal of about 12" or 12 1/2". That makes the total area of the eight screens about 50" x 20". That's large!
But square screens are rare, and I never found 12" one.
Here is a square 17" screen: 17inch Monitor Square LCD Screen
and you can get some up to >40": Square LCD Displays | JamiePro
Or 4", if you want: Square TFT Display, Square LCD Display, Square LCD Panel - Raystar
But there seems to be nothing in between.
Plus: I don't want to see the prices for the one from jamiepro - those are likely >10 times beyond my budget - and we are looking for eight of those...

In my mind I was thinking of a more compact 4 screen version with 2 screens per side.

j_holtslander said:
In my mind I was thinking of a more compact 4 screen version with 2 screens per side.

Yes, I checked this very often. It is absolutely amazing what they achieved.

Could always get a cheaper 16:9 screen and cover the excess area allowing only a square to peek through.

j_holtslander said:
Could always get a cheaper 16:9 screen and cover the excess area allowing only a square to peek through.
Click to expand...

Yeah that sounds like an ideal way to do it. 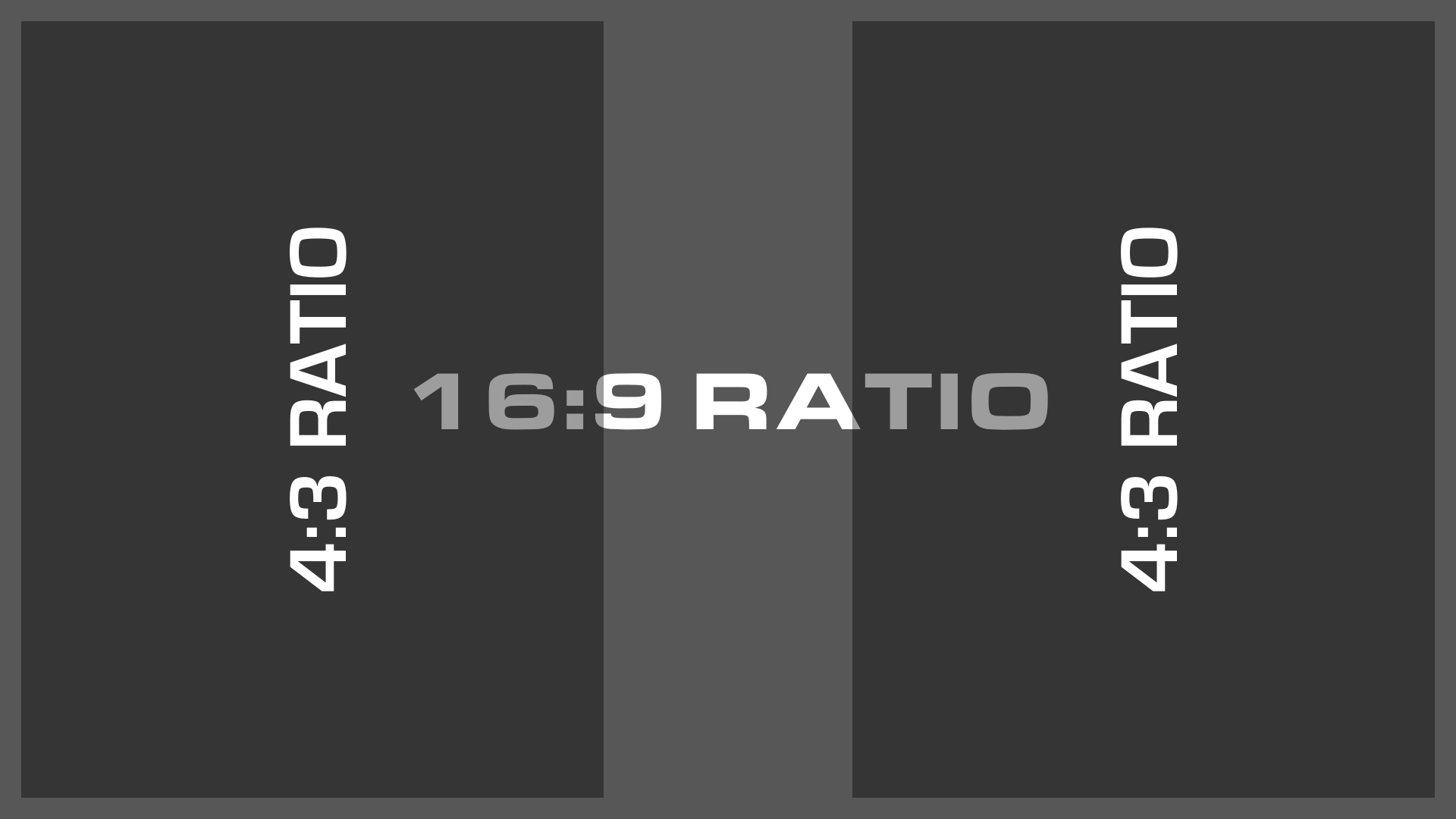 Oh yes, will be watching this thread with eagle eyes

I really have no intentions to build #1 or #4. But I had to figure out how to use four widescreen (16:9) monitors to cover the eight screens. 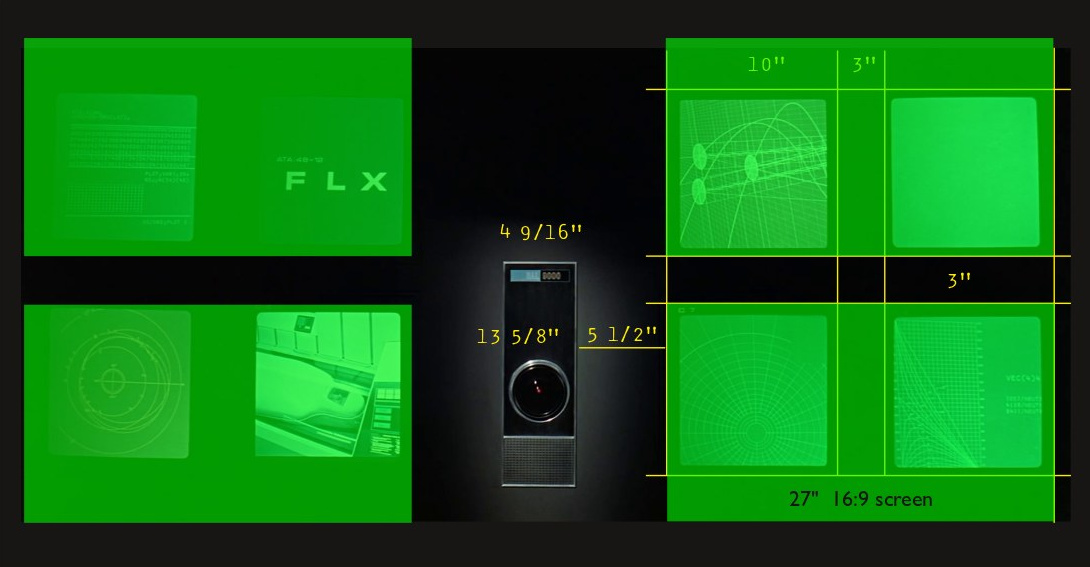 Starting with the established size of the face plate, I measured the width & height of HAL's screens to be close to 10" (I measured the outer size - the illuminated area is about 9" x 9"). The horizontal and vertical spaces between the screens are about 3". Therefore, the monitors must have a width of 23". For a 16:9 ratio, the height would be 13", which makes the diagonal 26.4". So four 27" 16:9 monitors (indicated by the green areas) would do the job.
Alternatively, 25" 21:9 monitors could be used too.
The total size of the prop would be 61" x 24" (plus additional space for the surrounding borders).

I am starting with unit #2: The HAL 9000 Unit in the Rotating Hallway
I have never come across any photos that show this unit in more detail. So, to figure out the dimensions, all I have is this image from a BluRay screen capture.

I use a magnified crop to obtain the dimensions, relative to the known size of the face plate . 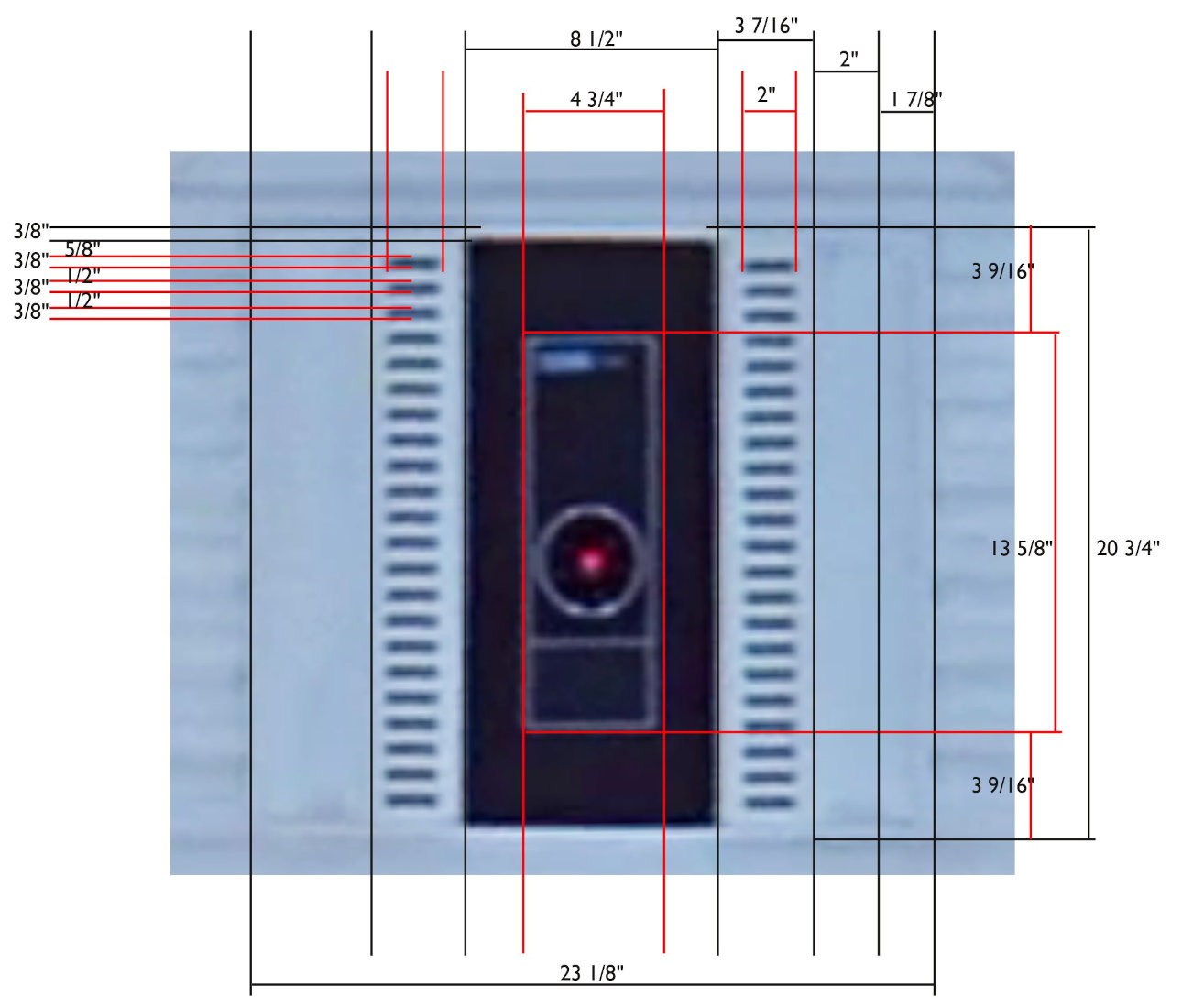 Since there are no screen images from the side, the total thickness is not known. I will make it thick enough to fit a decent speaker: 2 1/2" above the 3/16"-thick base plate (so the total thickness is 2 11/16"). The surrounding walls (top, bottom, left, right) will be made from two layers of the 3/16" plywood that I'm using with the laser cutter. The white plates with the horizontal slits will be positioned under a small angle, and such that the center piece (which holds the face plate) is slightly recessed (by the 3/16" thickness of the wood).

Funny how a pic can be deceptive: the aluminium side of the lens is touching the sides of the frame

RPF PREMIUM MEMBER
Karl Tate did a pretty great eight-screen surround for a HAL replica, complete with high-rez animations. It was shown at the London installation of the Kubrick Exhibition.

Karl did a wonderful job on that eight screen surround

j_holtslander said:
My bad. I thought they were 4:3
Click to expand...

4:3? Kubrick would never have been so déclassé as to use Academy ratio screens in the Future!