I don't play warhammer but a cool space armor is a cool space armor so I decided to build a space marine.
The plan is to build a cardboard space marine armor that will be 2.15 meters (7 ft) tall using a slightly modified version of JFcustoms foam files.
For the feet I used standard cardboard boxes but when I built one of the lower legs it had to many edges so I switched to the cardboard that comes in rolls and has only one layer of paper.
Every piece will be covered in paper mache and to smooth things out and add detail I'll add a layer of paper mache clay 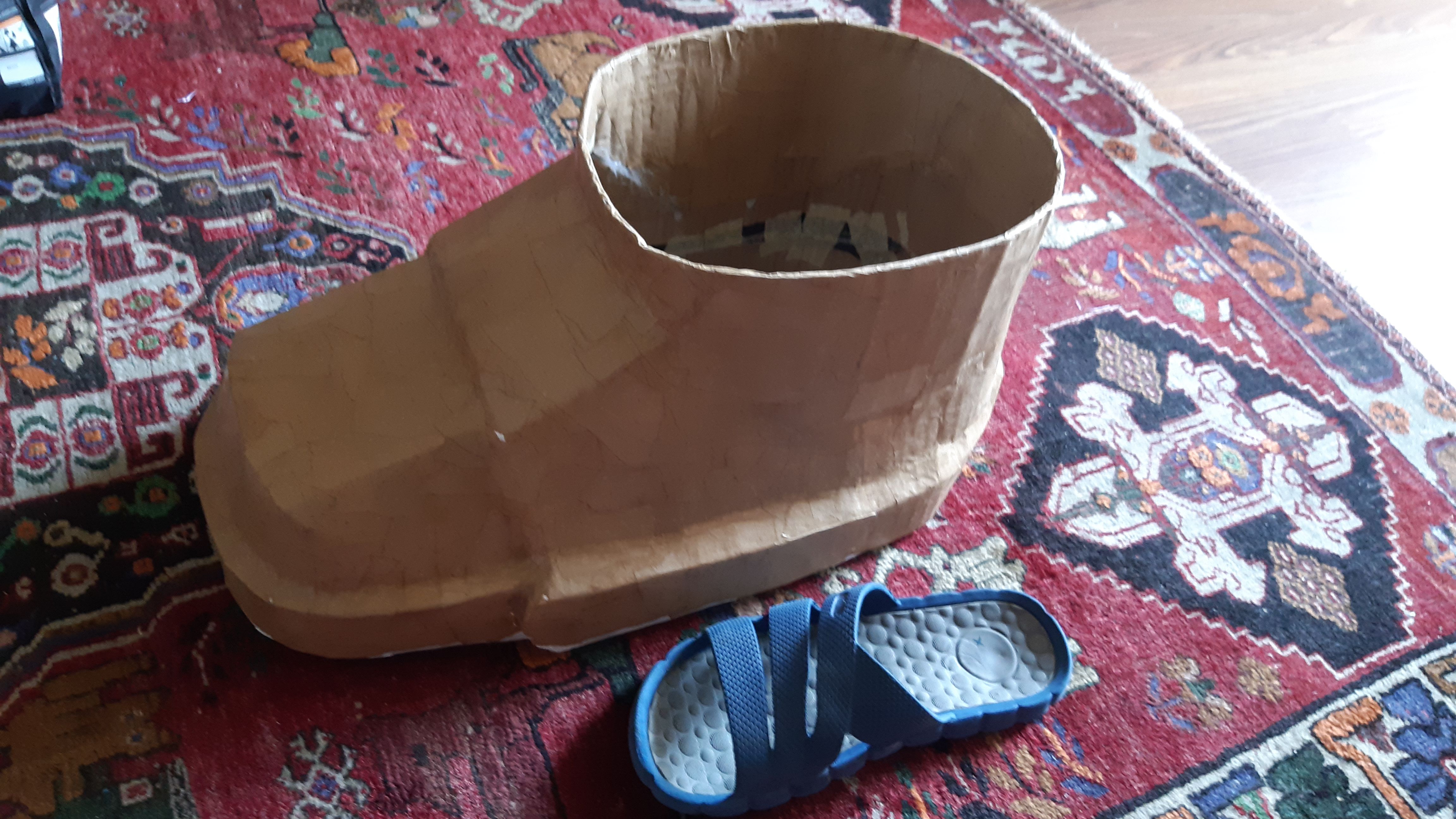 This is one foot, I later decided to separate the toes 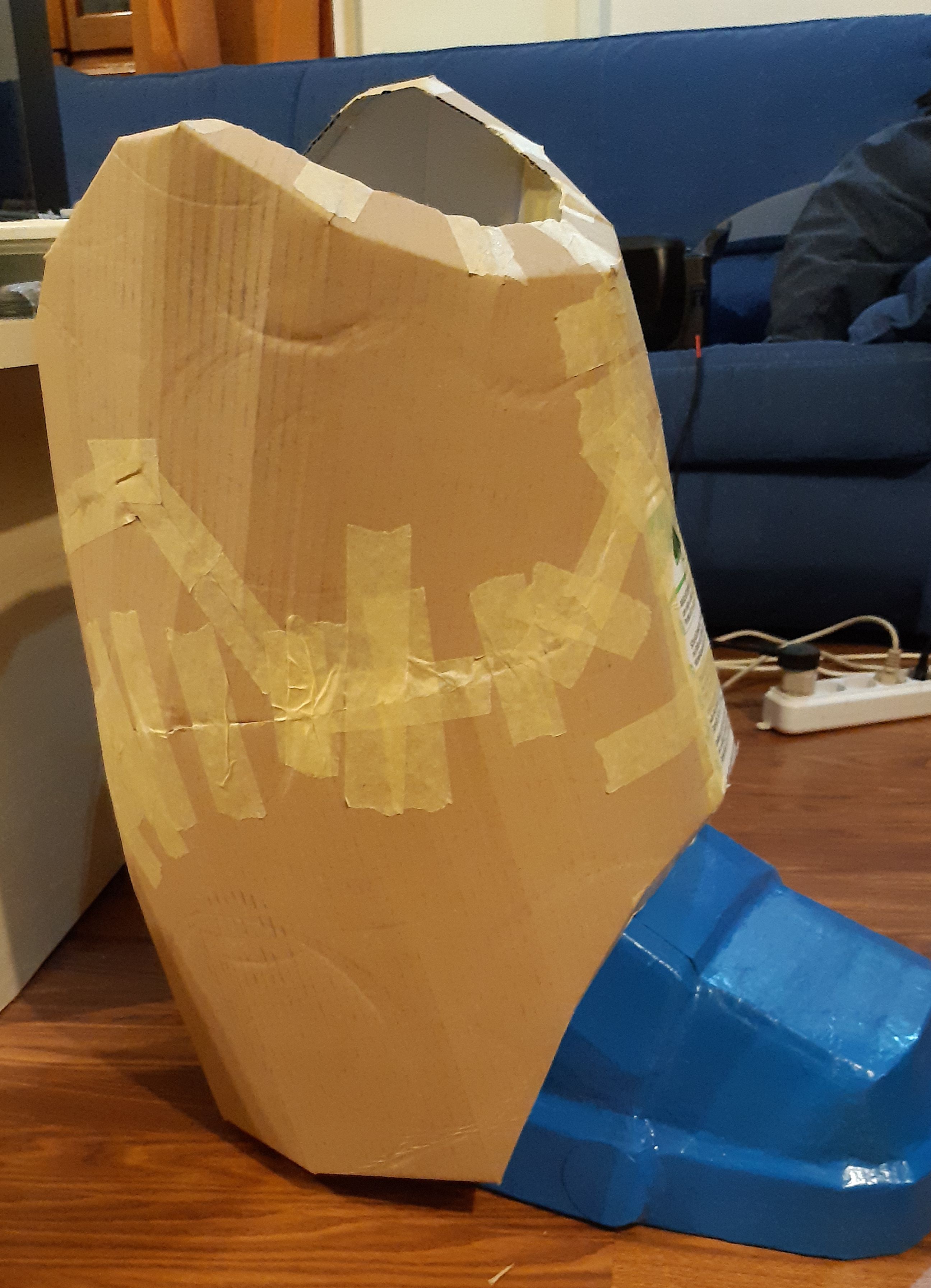 After the feet I built the right shin. This is when I decided to switch cardboard

I also built the other shin the thigs and knees but I'll post a photo of them next week.

If you want to know the process:
- scale and print the pepakura file
- tape the sheets of paper together
- cut loosely around the pieces and glue them on the cardboard
- cut the cardboard
- tape together with masking tape
- reinforce the seams from behind using pieces of cardboard and hot glue
- If a piece needs interior support I'll add it
- paper mache
- paper mache clay

So, after testing the paper mache clay I decided not to use it because I couldn't get a smooth enough finish.

Anyway I'm currently finishing the diaper and the stilts: the diaper needs to be reinforced and I need to figure out some stuff on the stilts.

Inside of the diaper 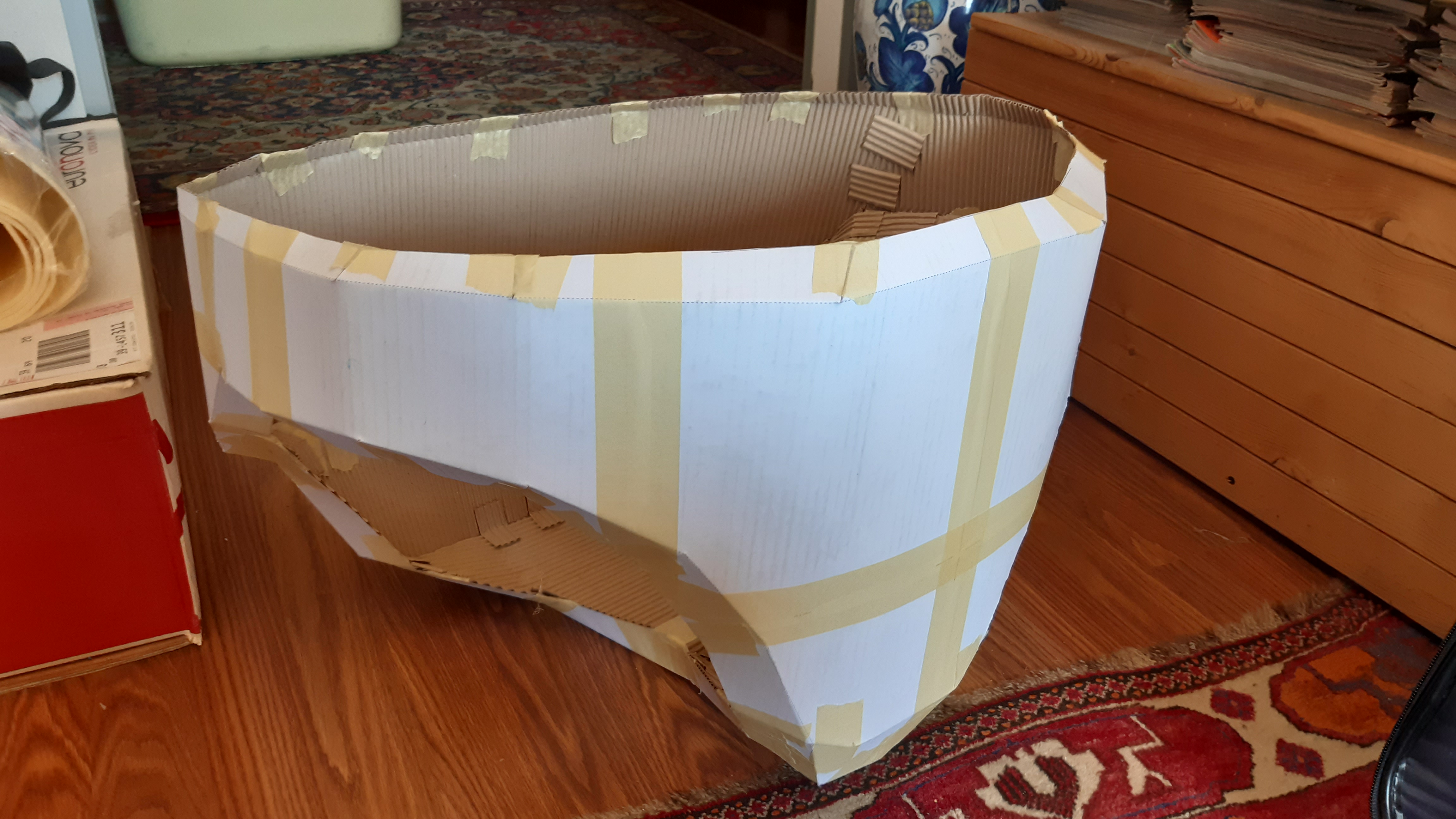 Outside of the diaper 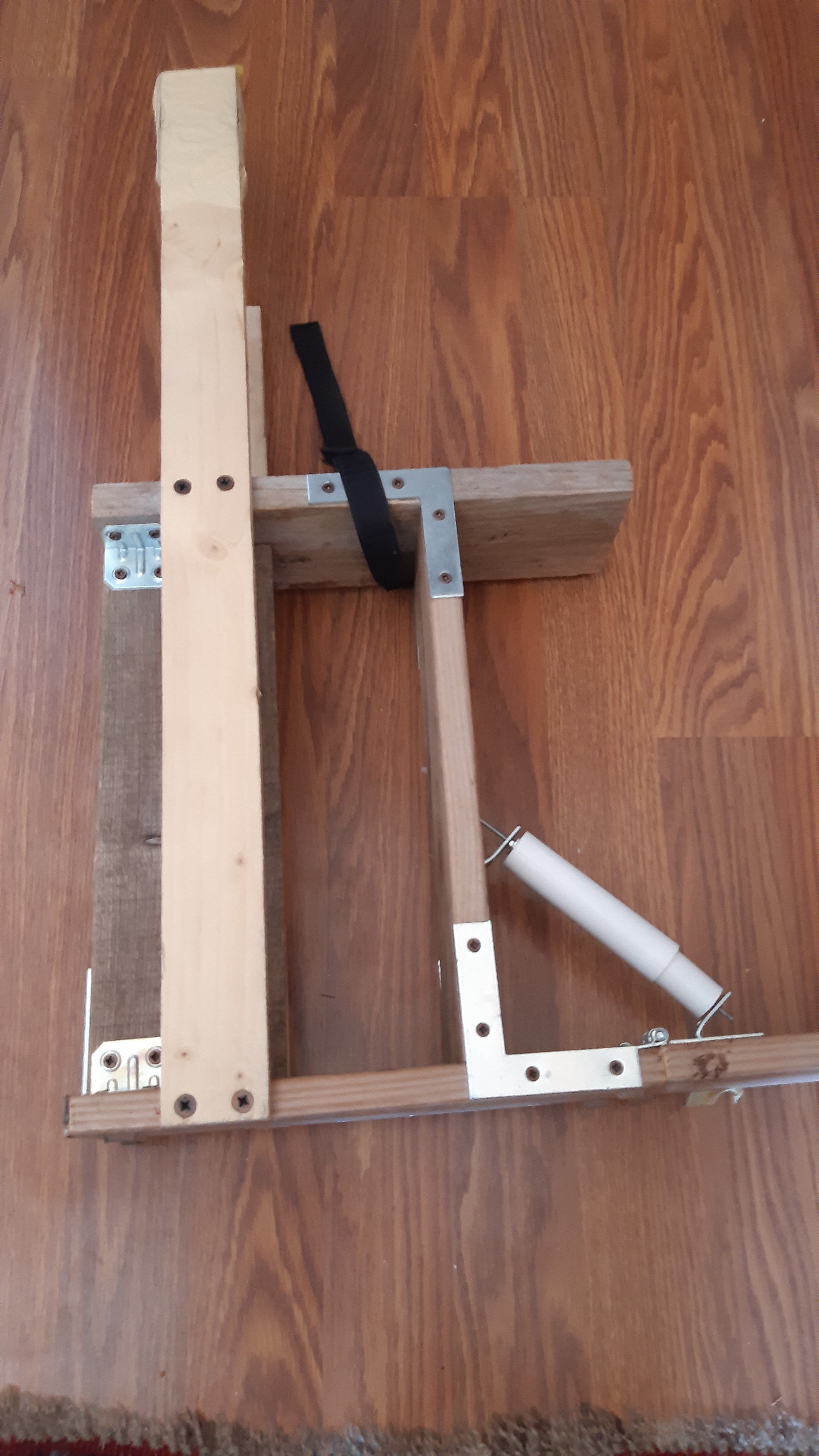 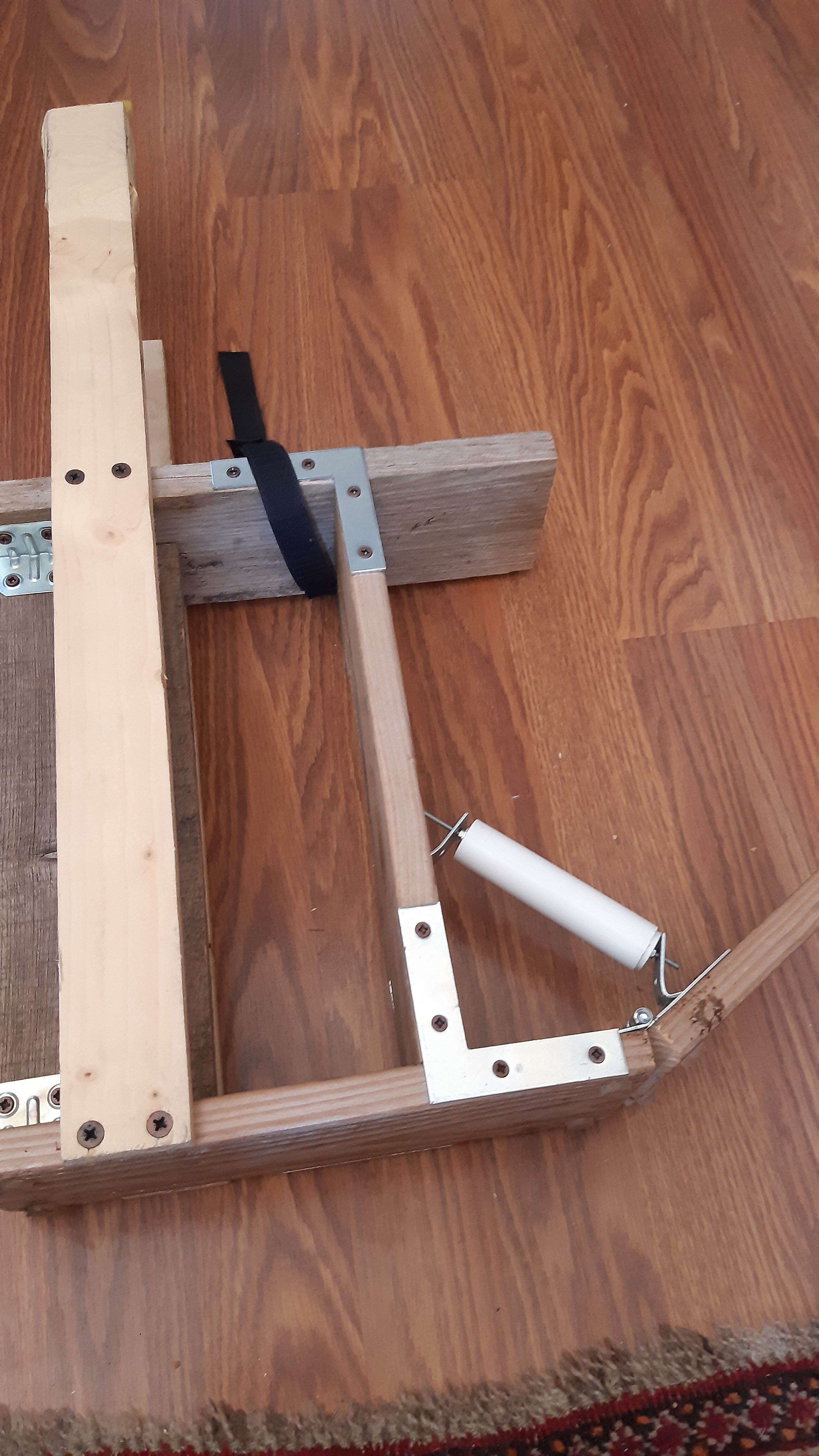 The stilts with temporary straps and moveable toe.
The moveable toe is made with a toilette paper holder so that the toe can return to the flat position.

Be careful with the stilts. I wound up using a rollerblade boot in my terminator build. I ditched the wheels and cut the trucks down and mounted them to a block

Now my risers aren't as tall as yours, I'm 6'1". My finished build puts me at about 7'8". The skate boots make mine real stable, I can almost run in them but don't want to try it lol. Good luck on your build, I'll be watching

AdeptMechanicus said:
Be careful with the stilts. I wound up using a rollerblade boot in my terminator build. I ditched the wheels and cut the trucks down and mounted them to a block
View attachment 1347948 View attachment 1347949 View attachment 1347950
Now my risers aren't as tall as yours, I'm 6'1". My finished build puts me at about 7'8". The skate boots make mine real stable, I can almost run in them but don't want to try it lol. Good luck on your build, I'll be watching
Click to expand...

I'm probably going to screw a shoe or a boot to the stilts to keep my feet in place and have a nylon strap on the calf though the idea of a rollerblade boot seems interesting, maybe I'll try that if my idea fails. thank you for the idea

I tried loafer style shoes and they didn't have the strength or support to lift my boot. Then thought about lace up, but I couldn't reach down in side the legs to tie them. Used the roller blade boots with the buckles to be able to secure them 1 handed. Something to think about

Sorry for not posting I know it's been a while, school started in september so its hard to continue on this project. I need to find the right time to work on this build so that i have time to study and not fail in every subject. Anyway I managed to do a couple of things: i reinforced the thighs and diaper and I managed to get my 3d printer working. When I have time and I don't have to study I'll continue this build but posts will be slow and far apart.