Though I would say that I 'directed' and commissioned this rather than making it, as everything apart from the paint was commissioned out to other people.

1. Find a reference.
Like most comic book designs, the G.I. rifle has subtle changes from artist to artist and story to story. So I decided to base the design on a ‘blue print’ illustration by the original creator Dave Gibbons. Dave also changes the design from story to later story, but at least it was a good starting point.

2. Get the scale and size right
I printed the design out at what I guessed was 1:1 size. I was miles out, but it did give me an opportunity to compare it to an airsoft rifle and make some adjustments. Mainly a little longer and a lot ‘taller’. 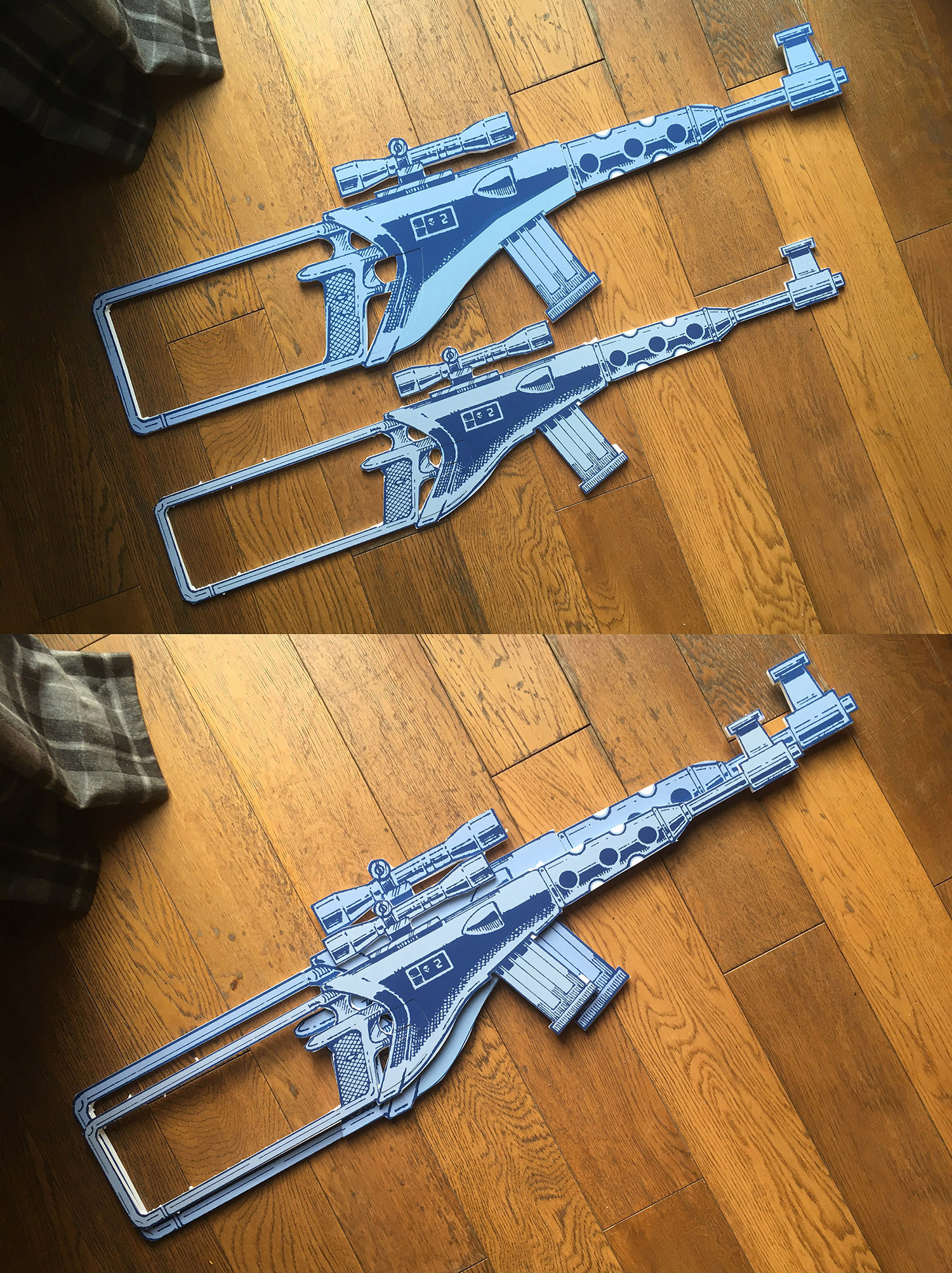 3. Work out the elements
Once I had the 1:1 size, I worked out the elements that I wanted to laser cut. My plan was to make a solid frame to hang the rest of the elements on, which also allowed the prop to be ‘broken down’ for transportation. 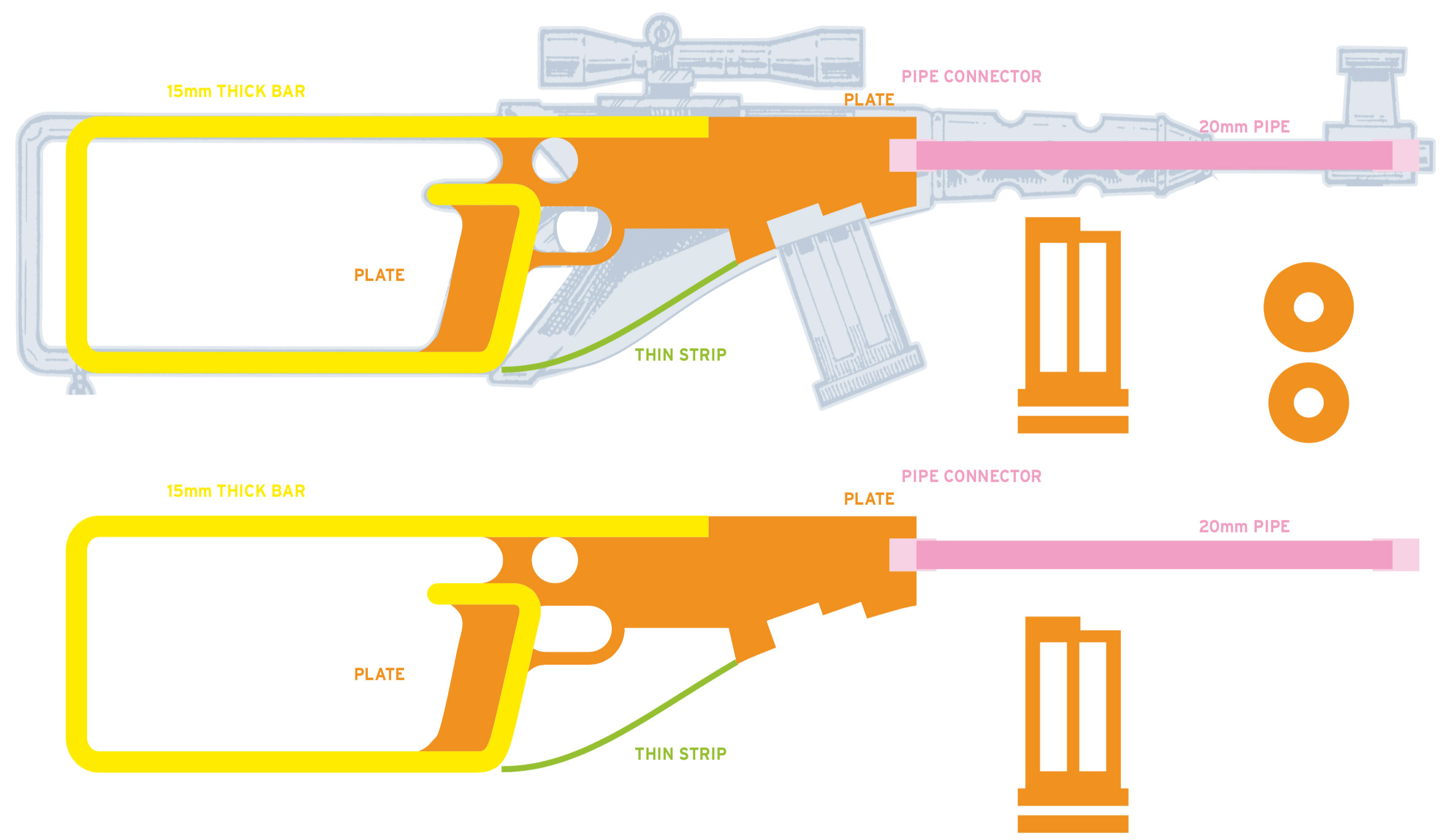 4. Laser prints and found items
I overlaid the elements that I thought should be laser cut steel on the design and sent the files out for cutting. The shoulder stock turned out to be insanely heavy. So I eventually had the edges ground down to remove some material, which actually looked much better. The Fabricator who ground the edges also welded the parts together and fixed the barrel screw fitting. The scope was created by cutting up two real scopes and I purchased some piping for the barrel (which would later be discarded). 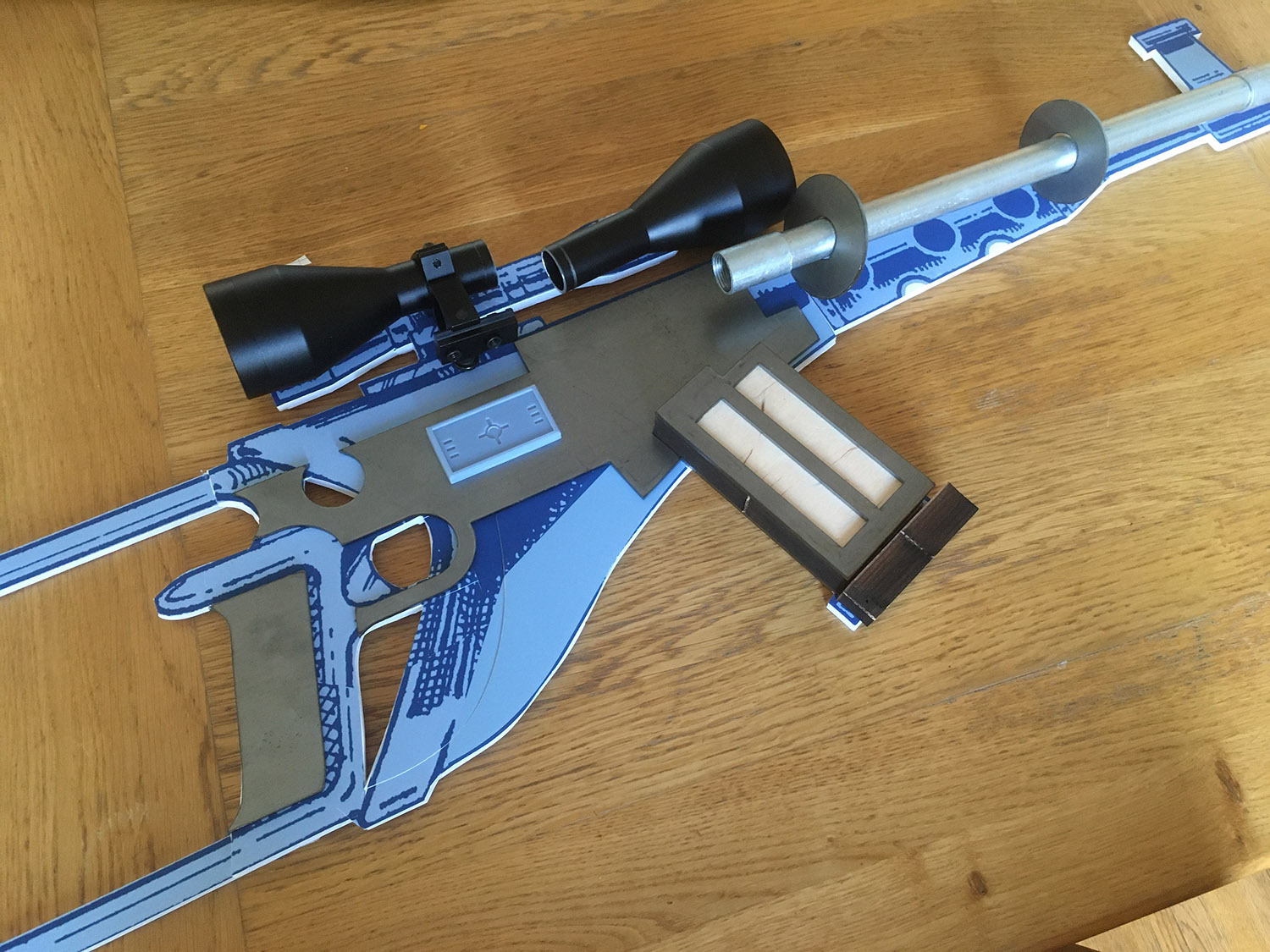 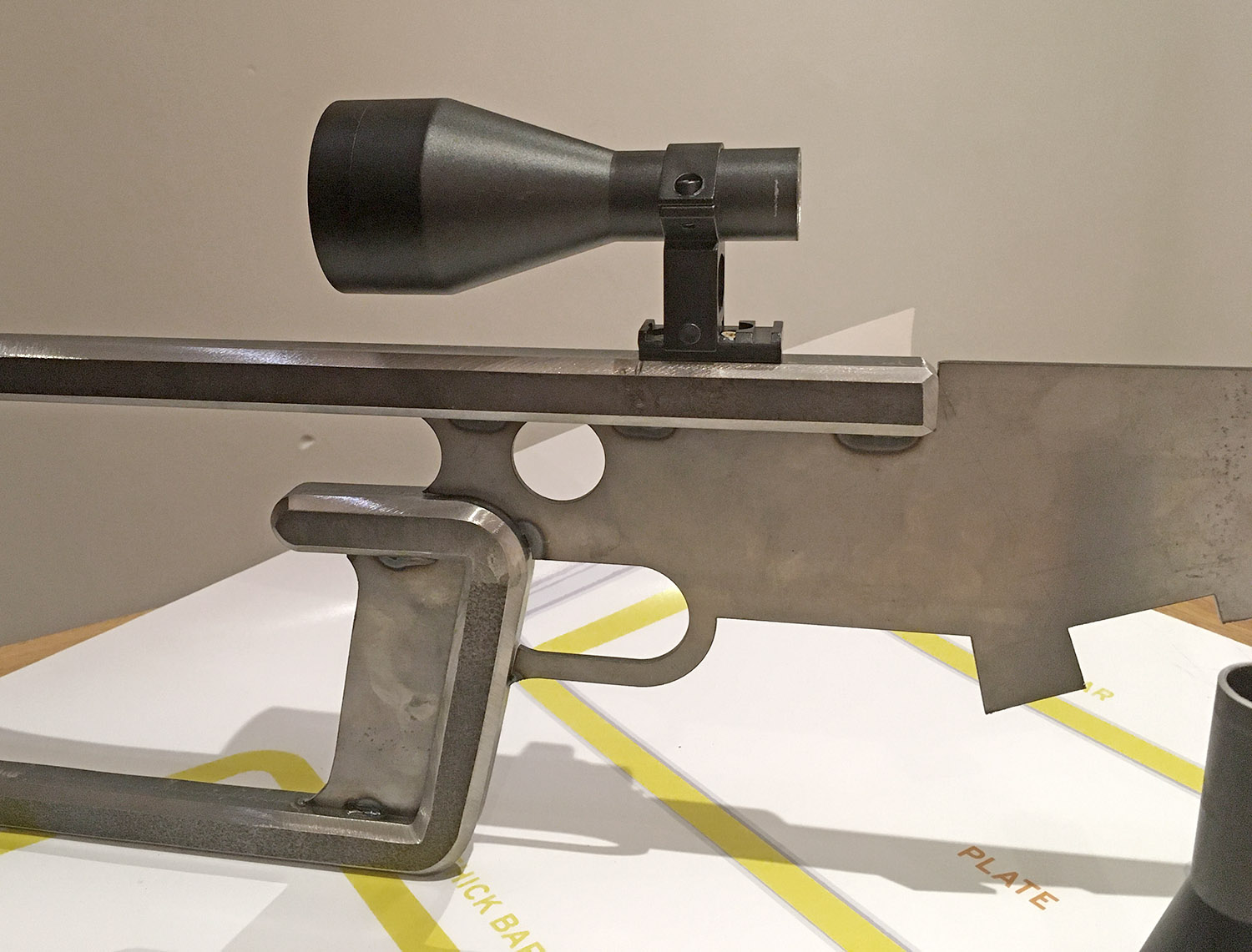 5. 3D prints
A few elements needed 3D modelling. I asked a friend (Steve) to model these and another buddy (Ross) to print them. 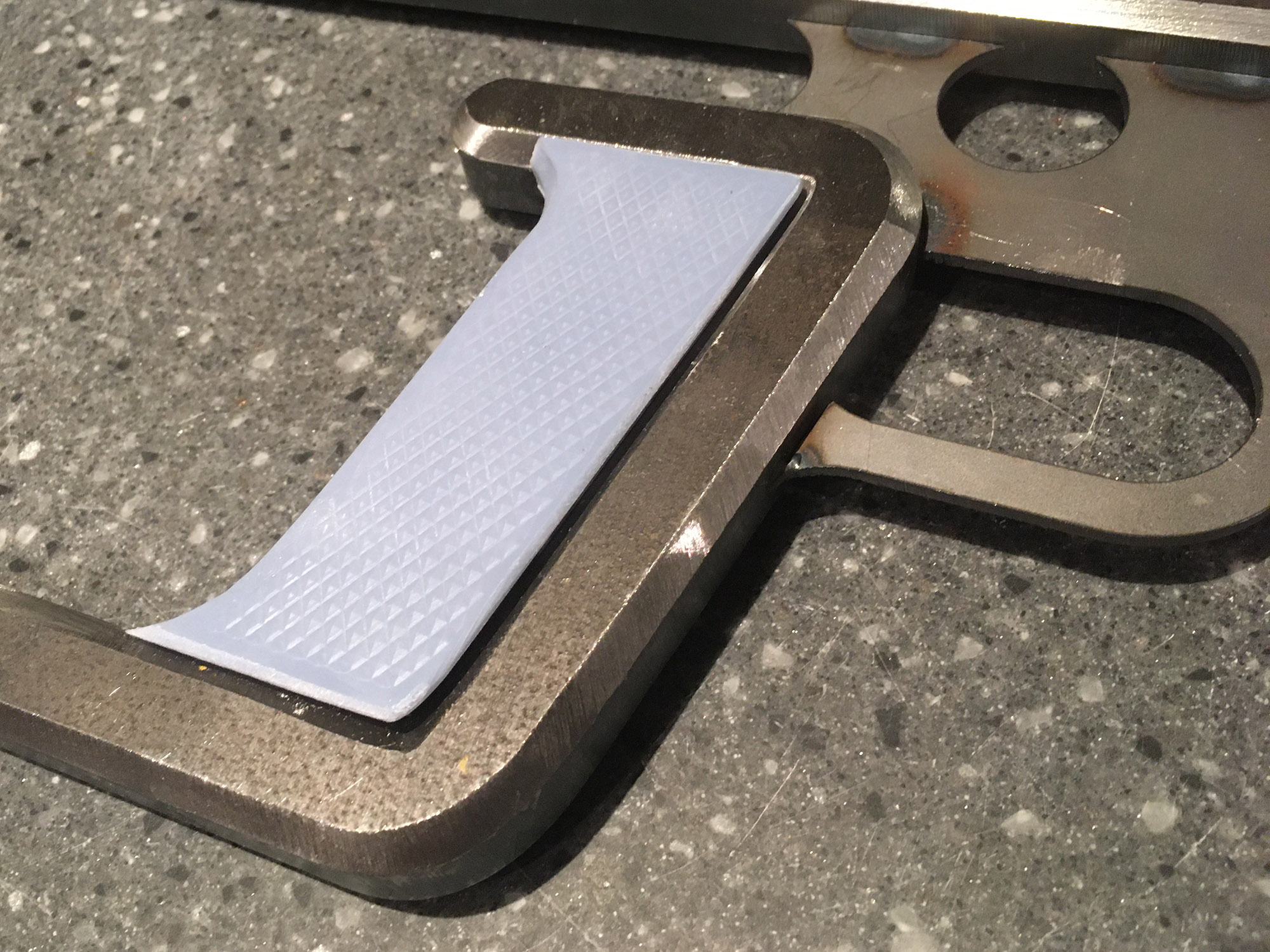 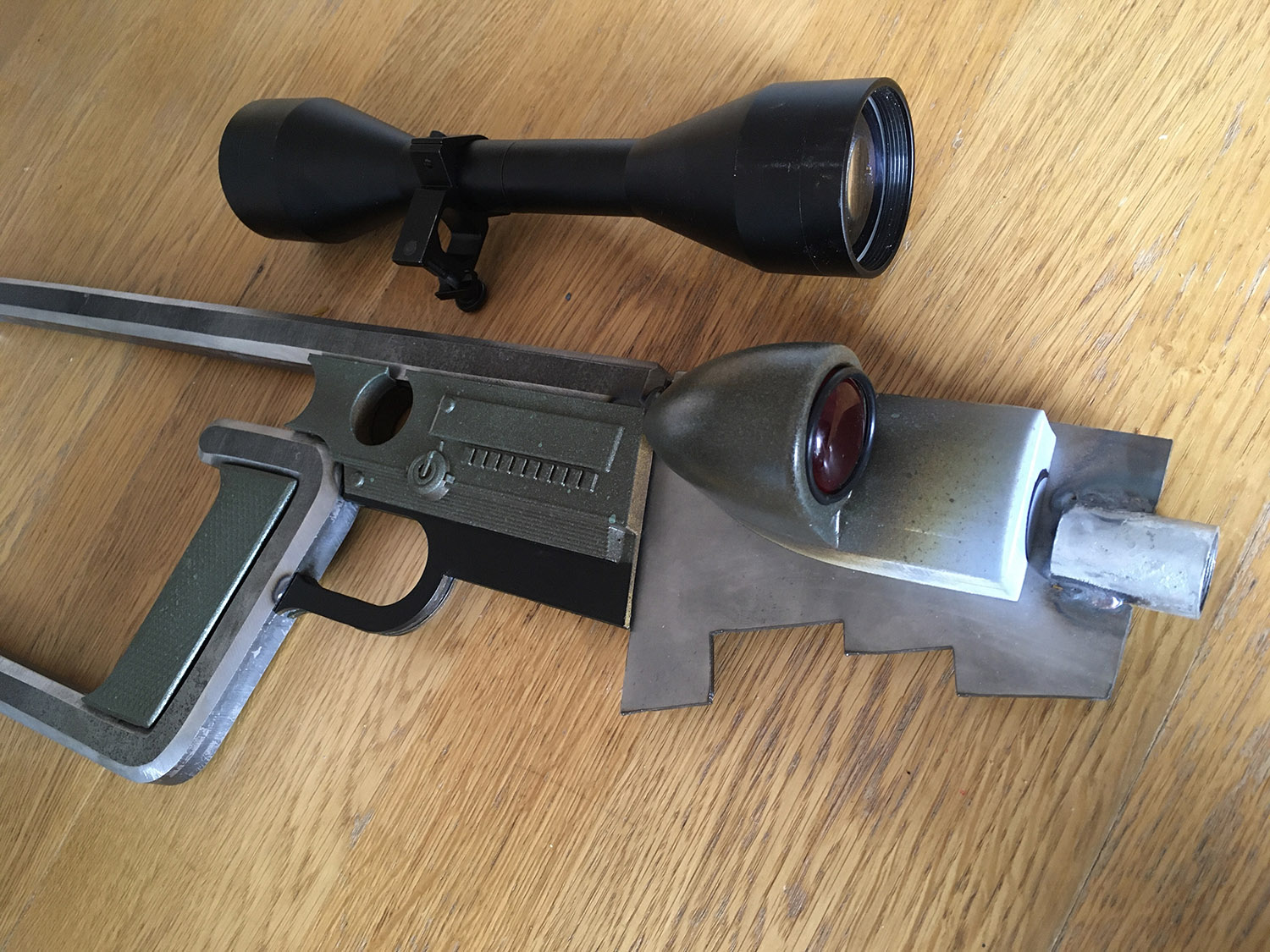 6. Fabrication, modification and finishing
Once I had all the assets I asked another fabricator (Ian) to produce the distinctive shroud in Aluminium. Luckily Ian made this a pet project and decided to redo some of the welding, as well as recreating a custom barrel assembly. Ian also suggested the heat tempered colour to the barrel and added some other clever touches. 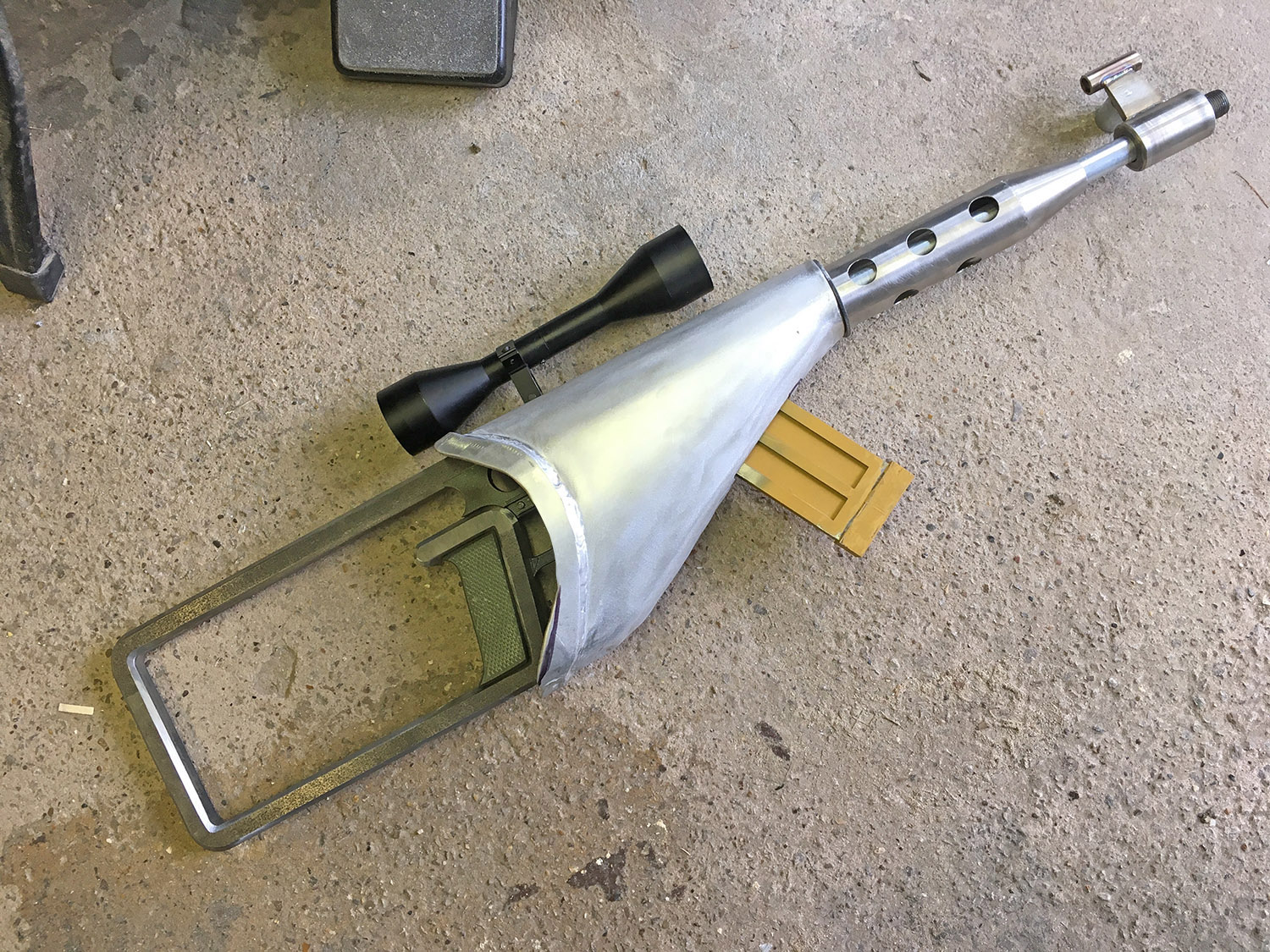 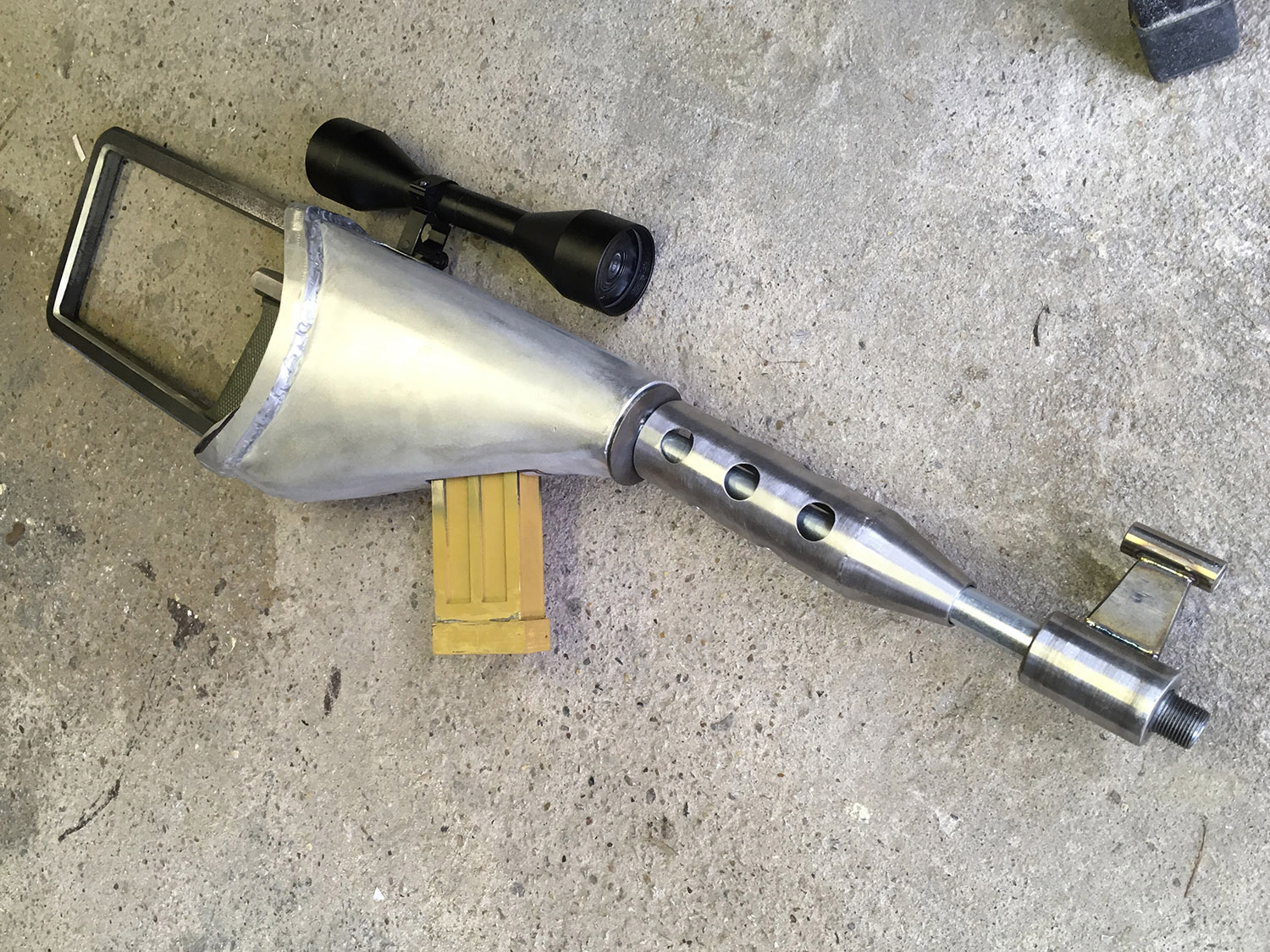 7. Last up, just glue on the 3D printed parts and paint. 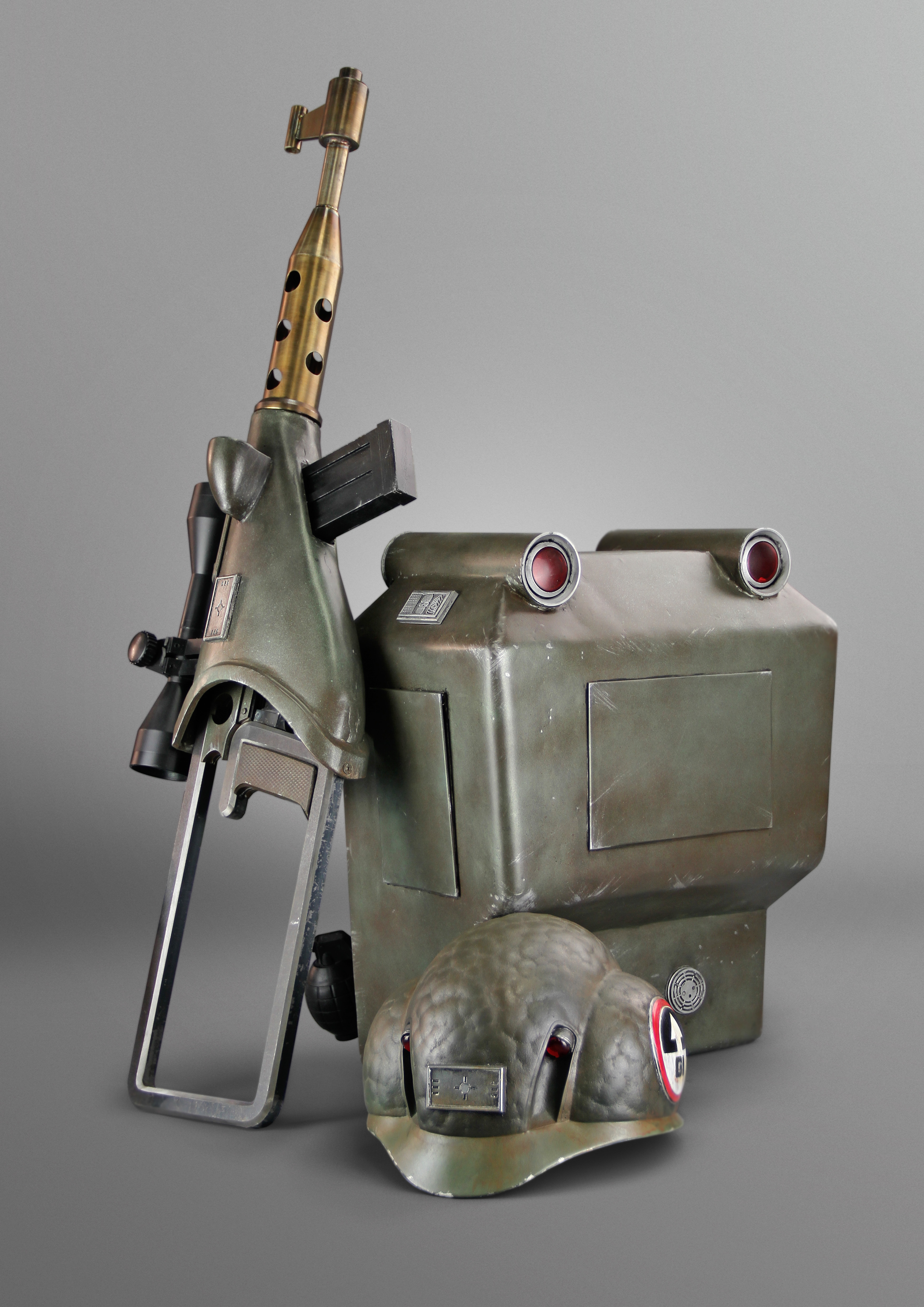 P.S. The helmet (Helm) is the Planet Replicas one. Which I followed for colour and overall style.
Last edited: Jan 14, 2021 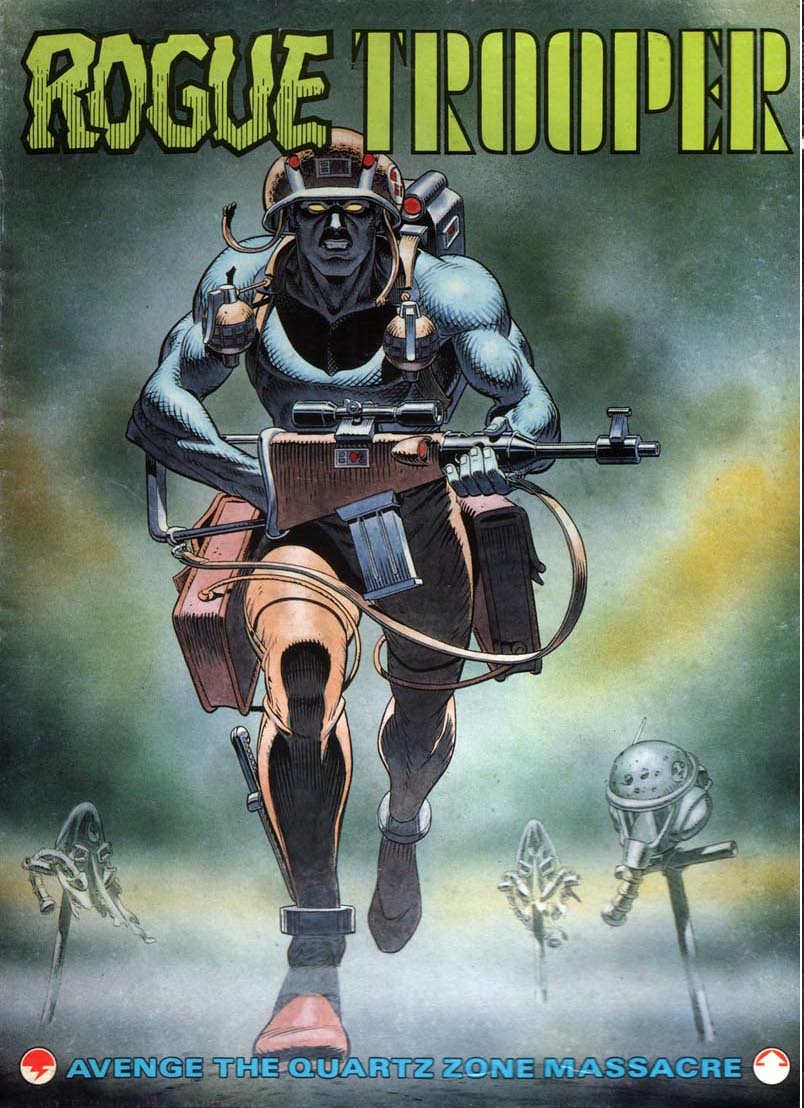 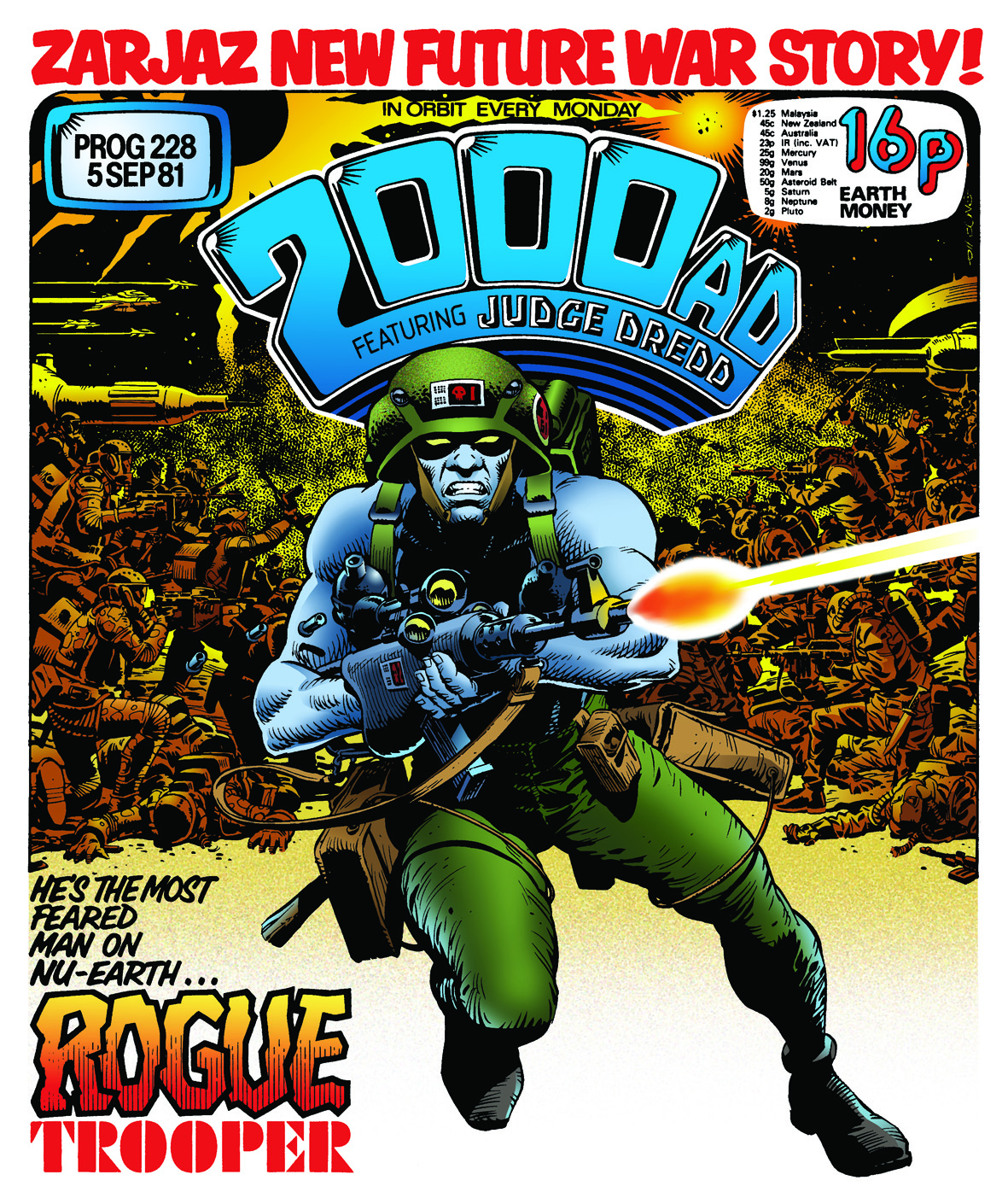 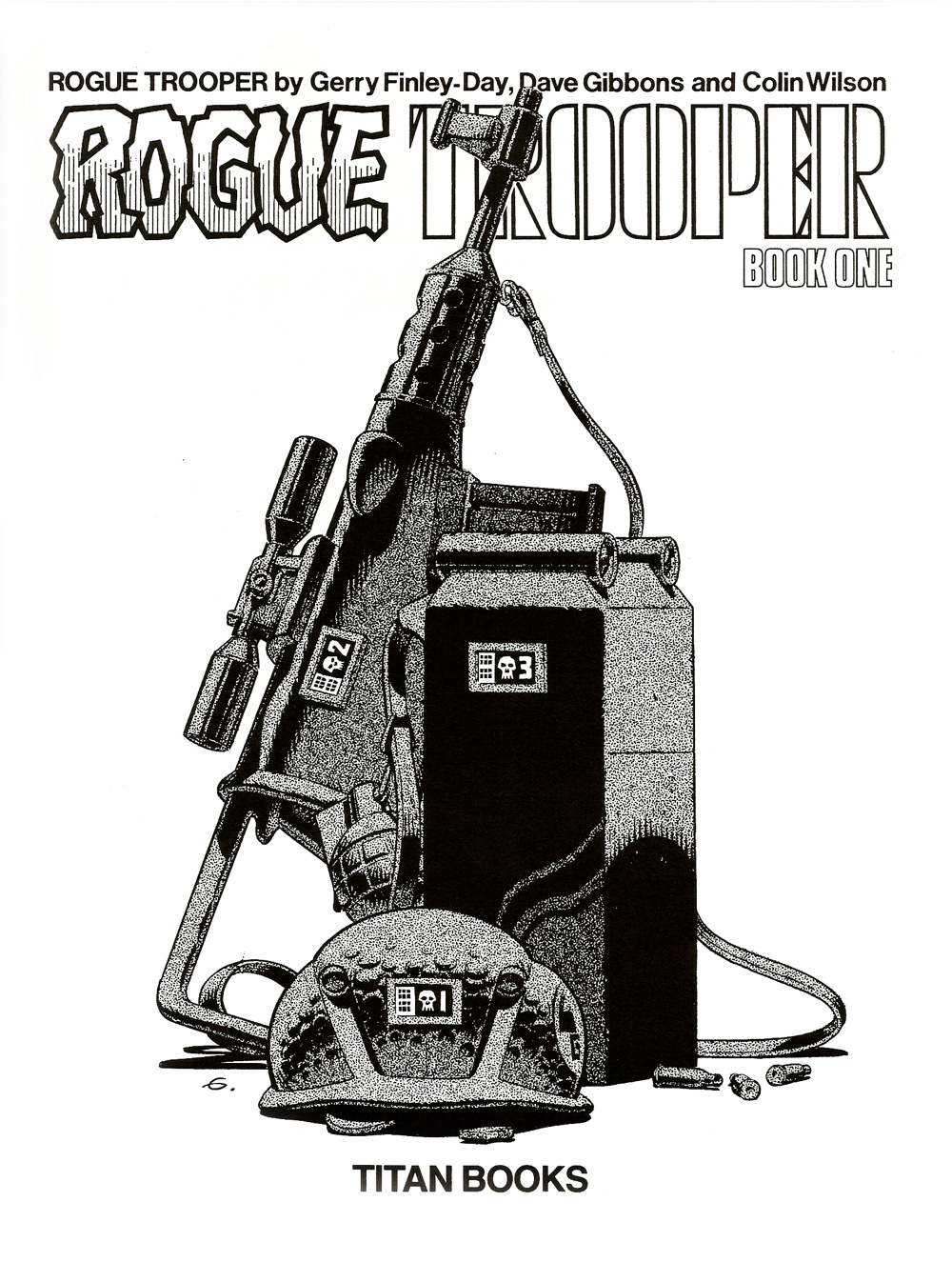 This is very cool. Rogue is one of my fav characters from 2000AD. How heavy is the rifle?

And most of that is the stock. I don't really know much about real rifle weights, but online an AK47 (with magazine) is listed at about 4.8kg.

I suppose you could justify it, that Rogue is a genetically engineered super soldier and Gunnar is also be supposed to be suitable as a marksman's rifle. An Accuracy International rifle is listed 6.8kg.

Add in a some sci-fi nonsense about special metal alloys for a heavy duty rapid fire barrel and I suppose it's okay.

I wouldn't want to be a normal human schlepping it around a convention hall though
Last edited: Jan 15, 2021

That pretty hefty, Modern rifles have a lot of plastic polymer material like the G36 and only weighs 3.63 kg (8.00 lb) and given that its set in the future the G.I. rifle would be made of some very light weight material. The shroud would have been made of a tough lightweight plastic rather than metal. and the stock would be made with a titanium like metal stronger that steel and a lot lighter.

RPF PREMIUM MEMBER
Yep. To be honest the stock should have been aluminium as well, but I couldn't find anyone to laser cut aluminium at the correct thickness. The fabricator, who I eventually used, had some other ideas as well, but by that time the steel had developed a lovely patina, so we stuck with it. 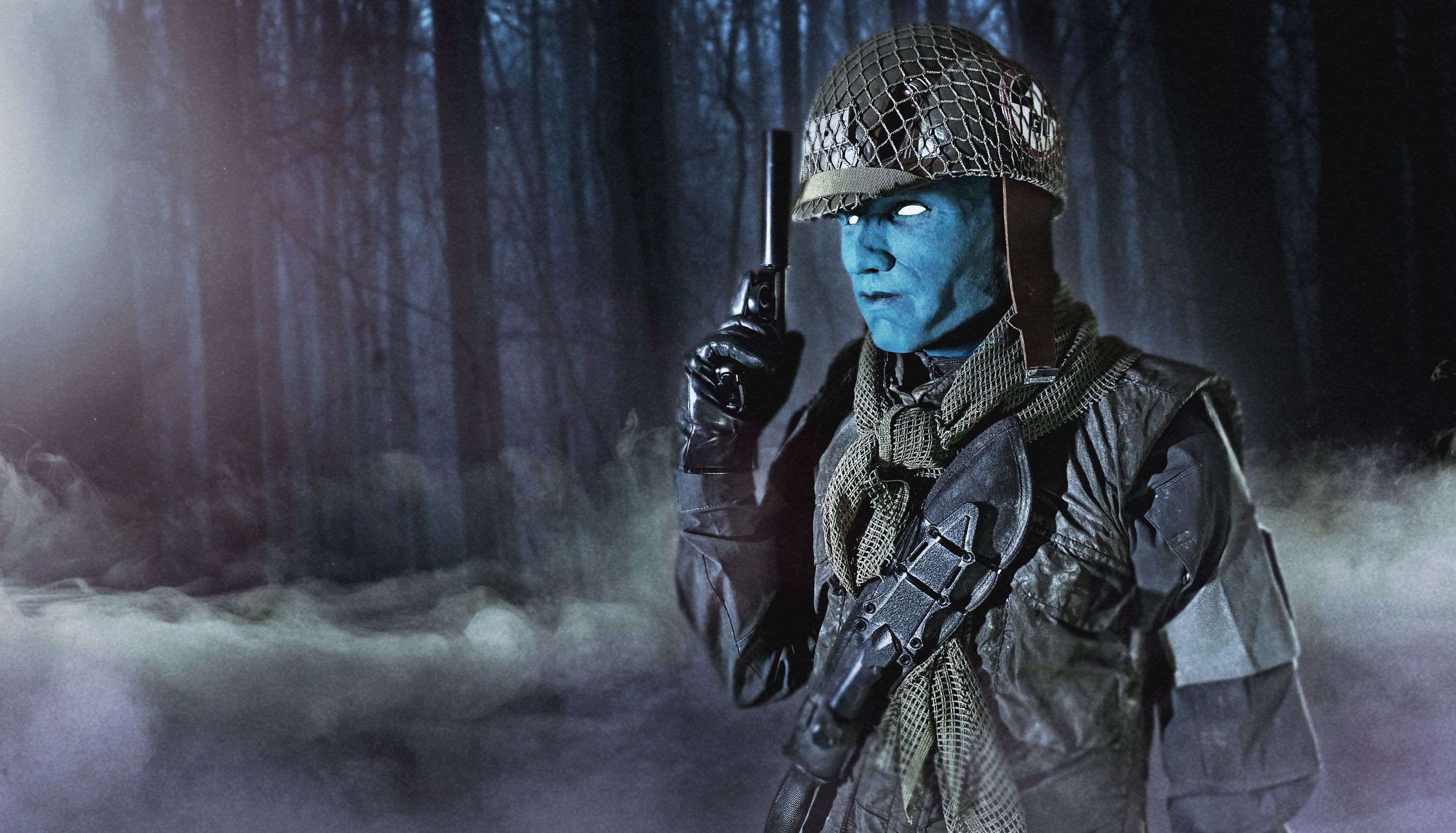 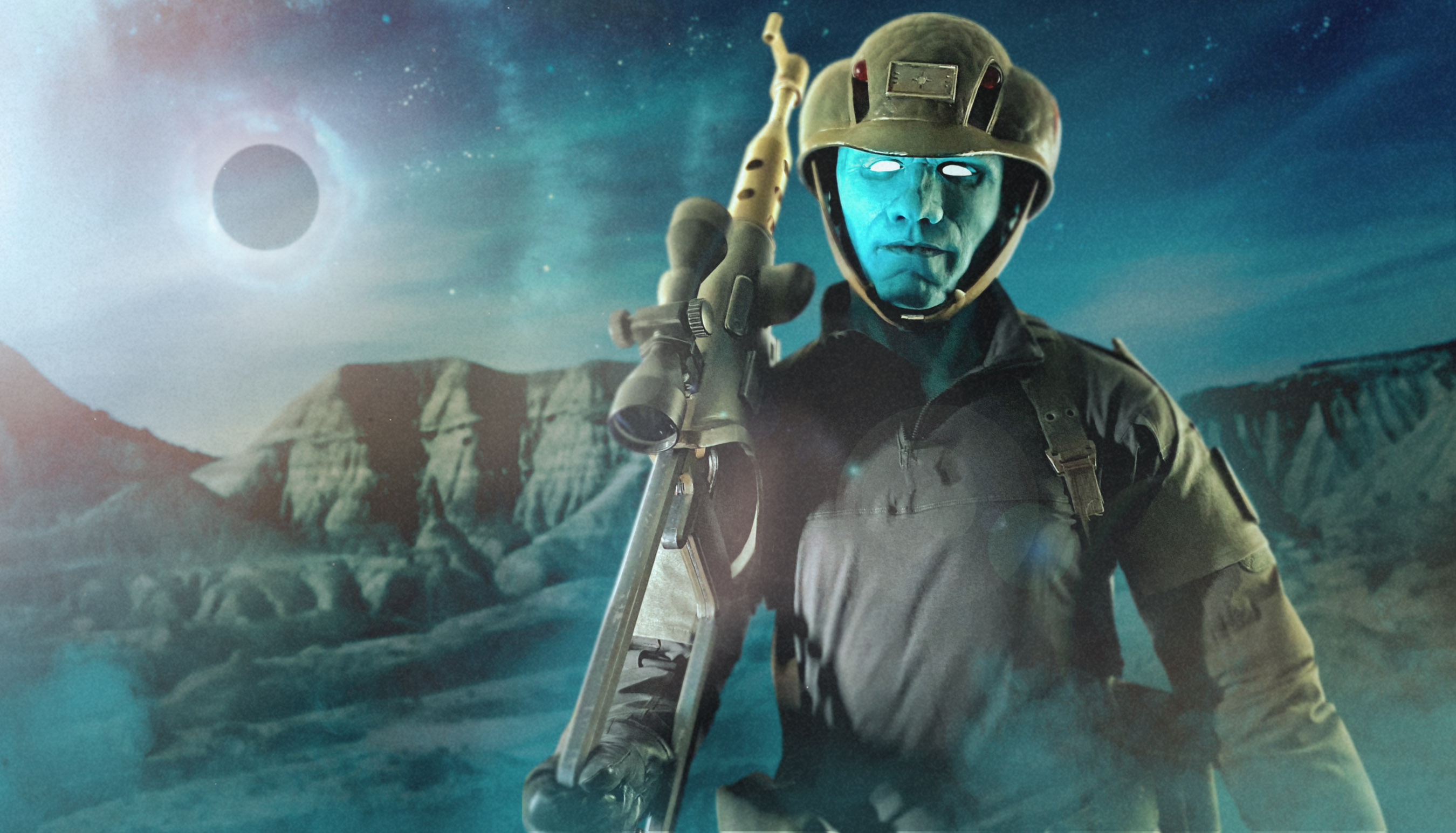 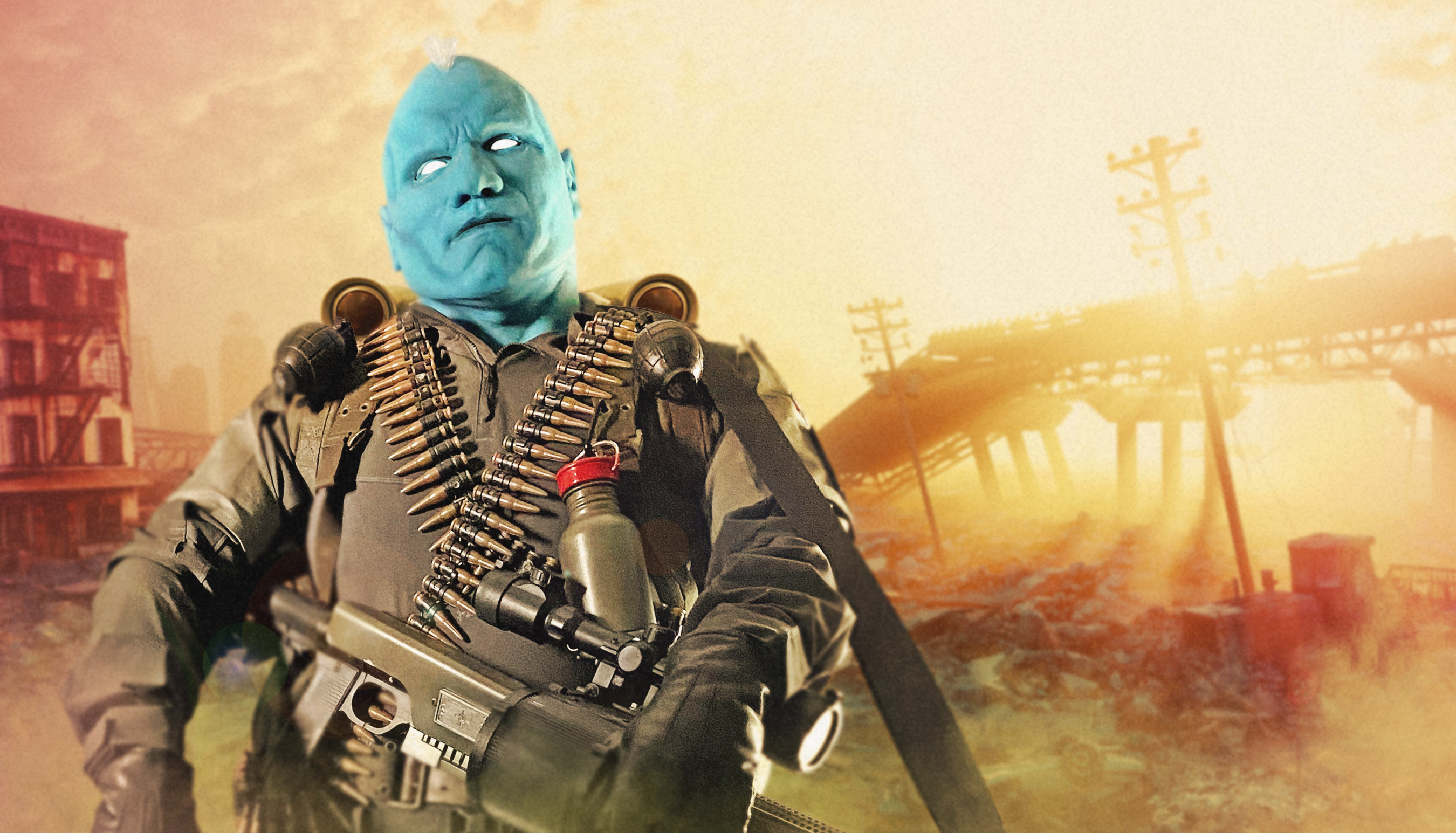 What are you doing wearing shirts & Jackets? Your Rogue, not Friday. Get that chest out.