RPF PREMIUM MEMBER
This is my latest Graflex with Metal Master chassis, spinning Plasma Gate and the new mb-sabers Bladeholder called the Emitter...
This Saber is not for sale!

RPF PREMIUM MEMBER
Out of this world!!! What metal choices did you go with?
A

Do you have a rough timeline of when the emitter will be available?
R

Hey GraflexSaber ! It looks like there's a spinning ring holding the little plates over the Plasma Gate, how'd ya do it?

I love the sound of the little parts spinning around!

I love what you did with the chassis, outstanding!

RPF PREMIUM MEMBER
Still would love to know what metals you used? Brass and stainless?

RPF PREMIUM MEMBER
Martin kinda just pops in now and then to advertise his latest and greatest creations, so hopefully you get a response, Danny, but I wouldn't hold my breath.

Maybe if he sees this post he'll feel compelled.

Pretty sure he makes most everything by hand, and it's always impressive to see his work and designs. I wanna say he's a clockmaker? Watchmaker? Something that involves teensy weensy bits and bobs, perfect for this kind of work.

My personal FX Graflex is using one of his older chassis designs (was a kit I had to build myself, and it wasn't easy, but it was worth it), before he started offering parts printed in metal (from Shapeways). I should snap some new photos of it, it's just been hanging on the wall here for a while, barely touched it in a year.

RPF PREMIUM MEMBER
Oh shish, that's what I forgot to grab! I'm out here in the carport taking pics of other stuff, I'll go grab it now.

Thanks for the reminder!!

Wow so beautiful... and boy does that thing spin!

I finished this thing about a year ago, and already lots of more complex and cool designs have been done since, some with metal printed parts, so basically I'm saying mine is already feeling outdated, but it was still a fun challenge to build.

I can see areas I want to improve upon, though, and try different paint techniques and whatnot. 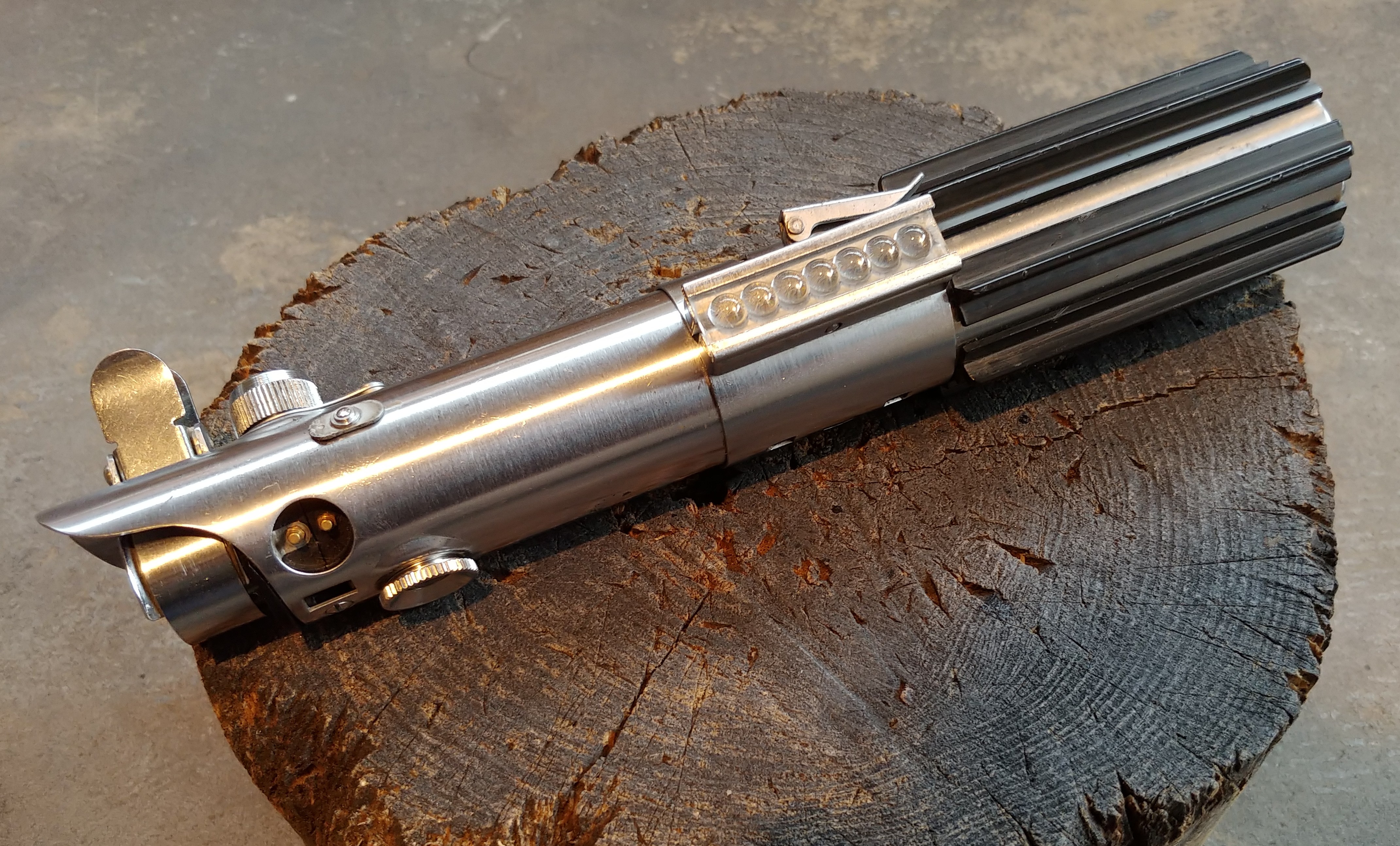 So at first glance, a nice vintage Graflex, with a few slightly unsightly holes drilled in the bottom.. 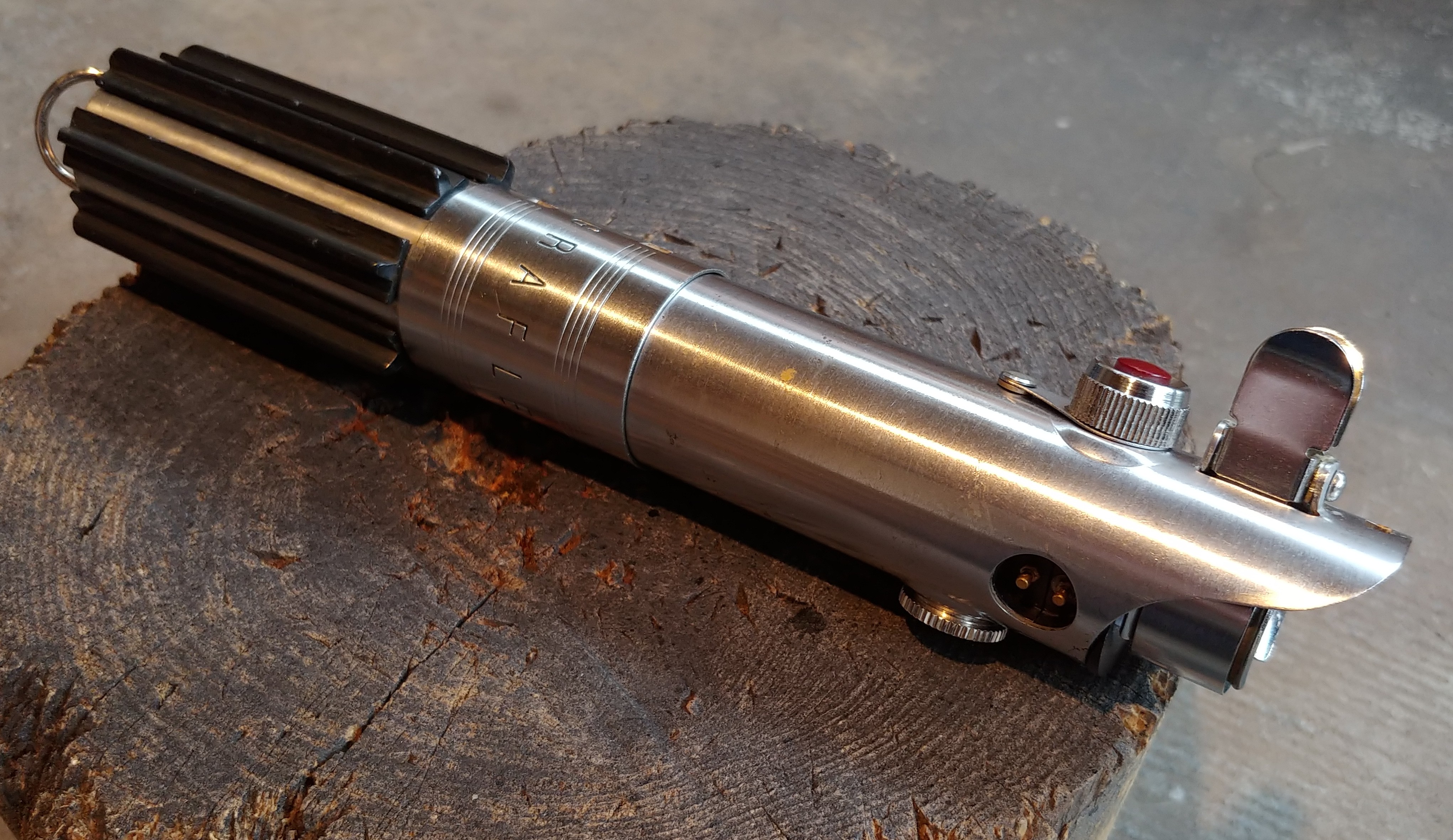 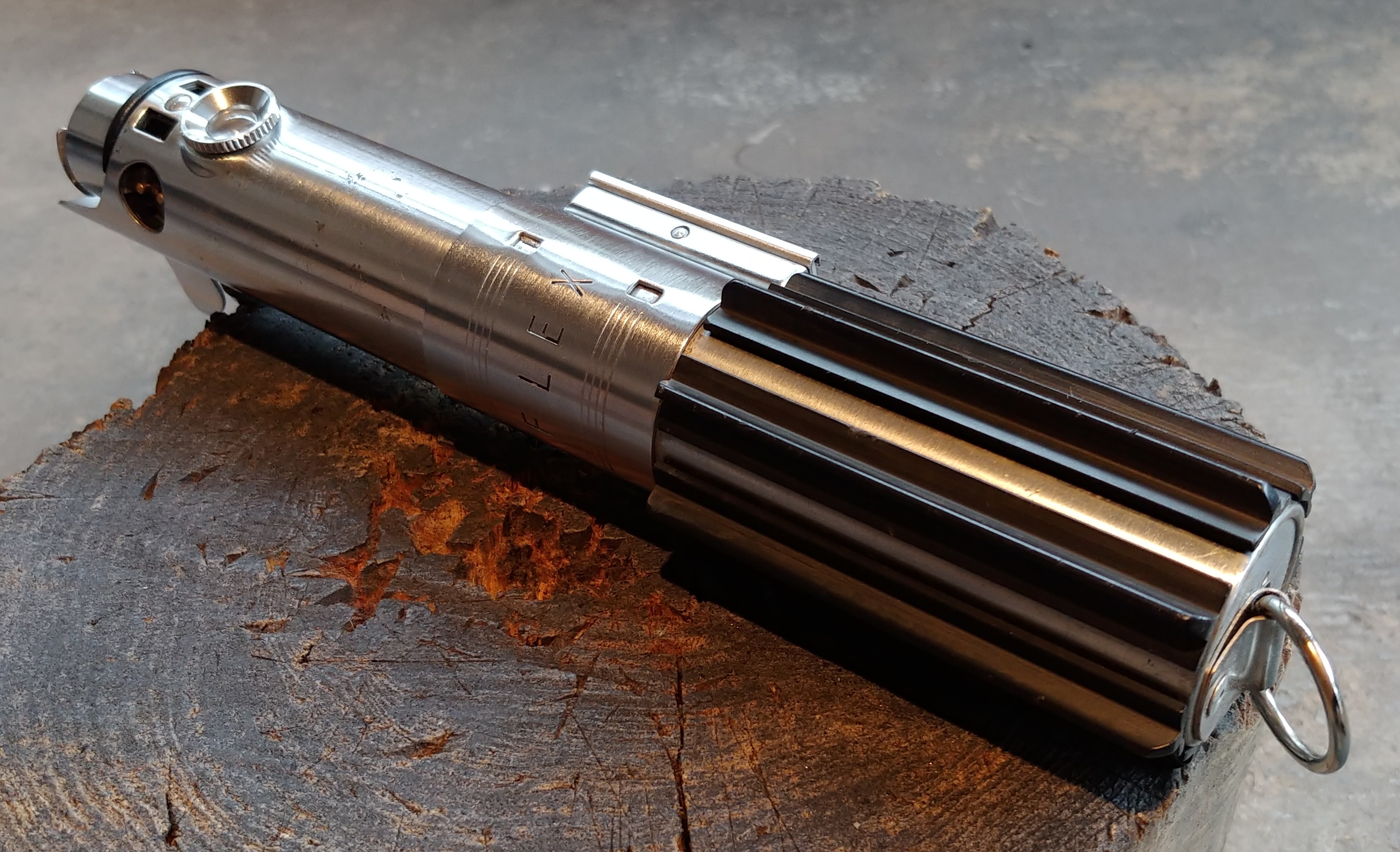 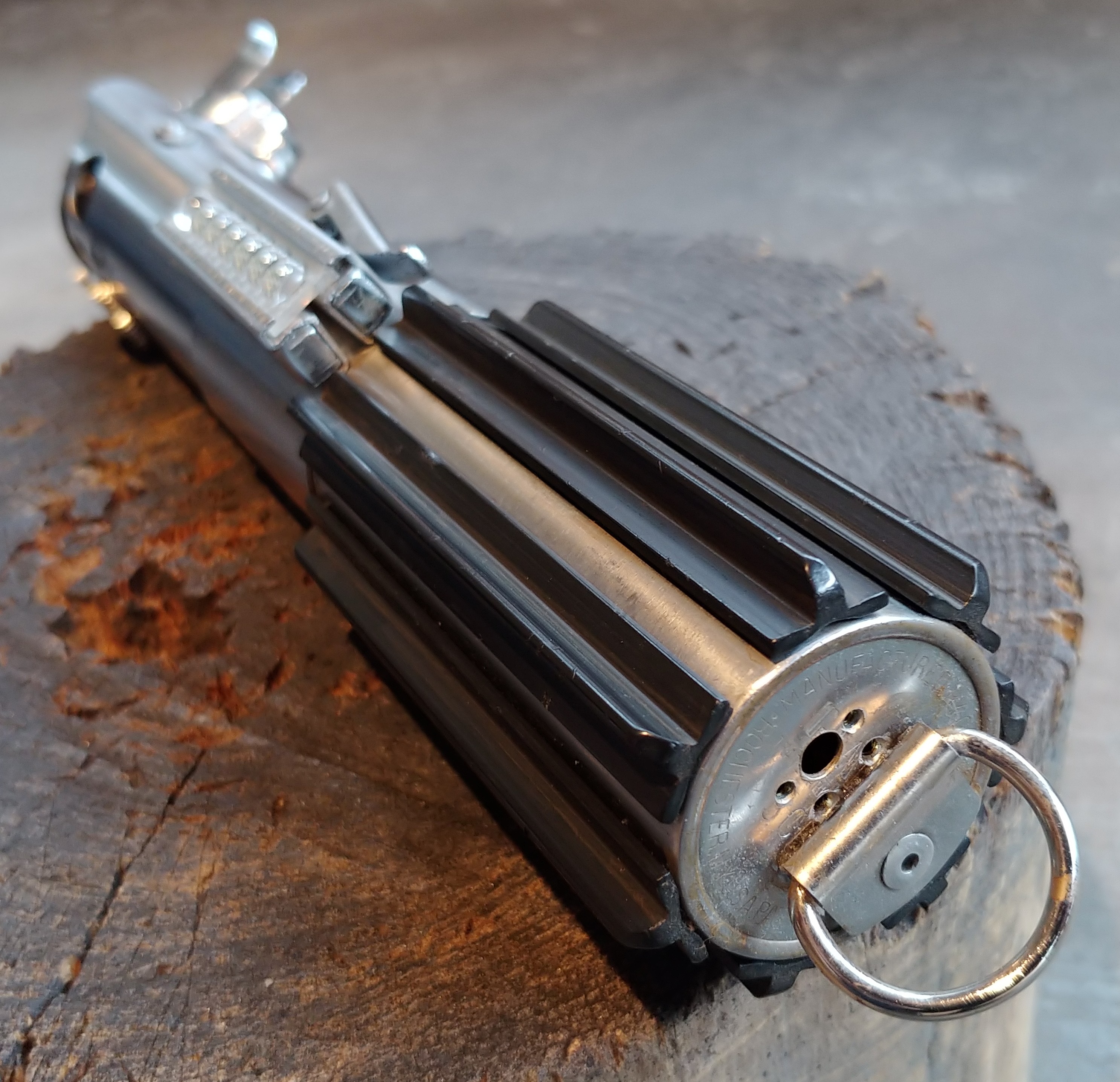 I would like to do something about those holes, but they really do help the sound come out much clearer. 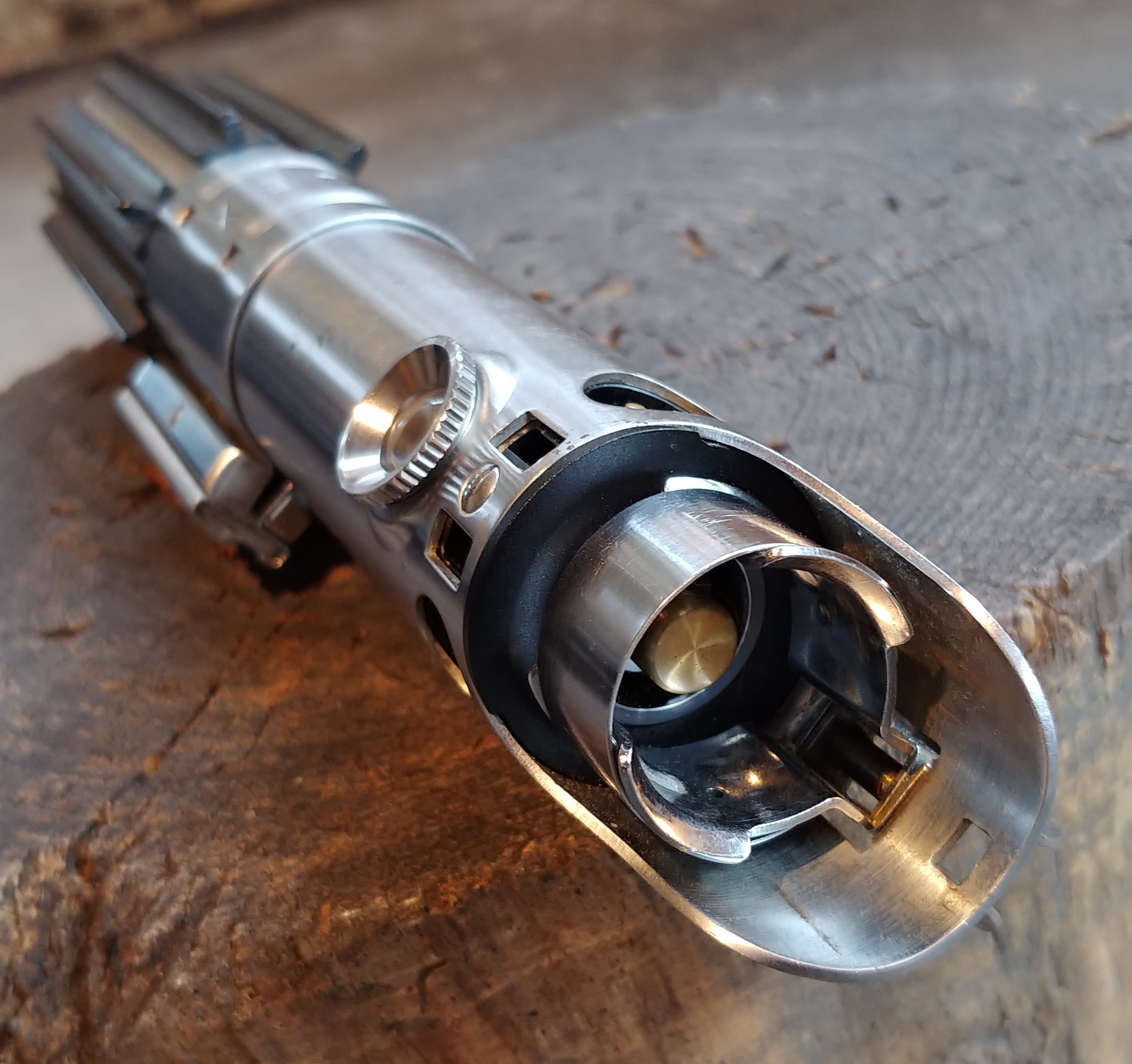 This is a Solo's Hold blade holder, and as far as I know, was the nicest you could get at the time (it comes apart between the pins, allowing you to slide all the guts out the bottom), definitely pricey, but very clever, and accurate for your Graflex, plus you get to reuse your big spring loaded contact pin. It's just too bad it's not Bakelite!

And then you open the Graflex and slide the bottom away.. 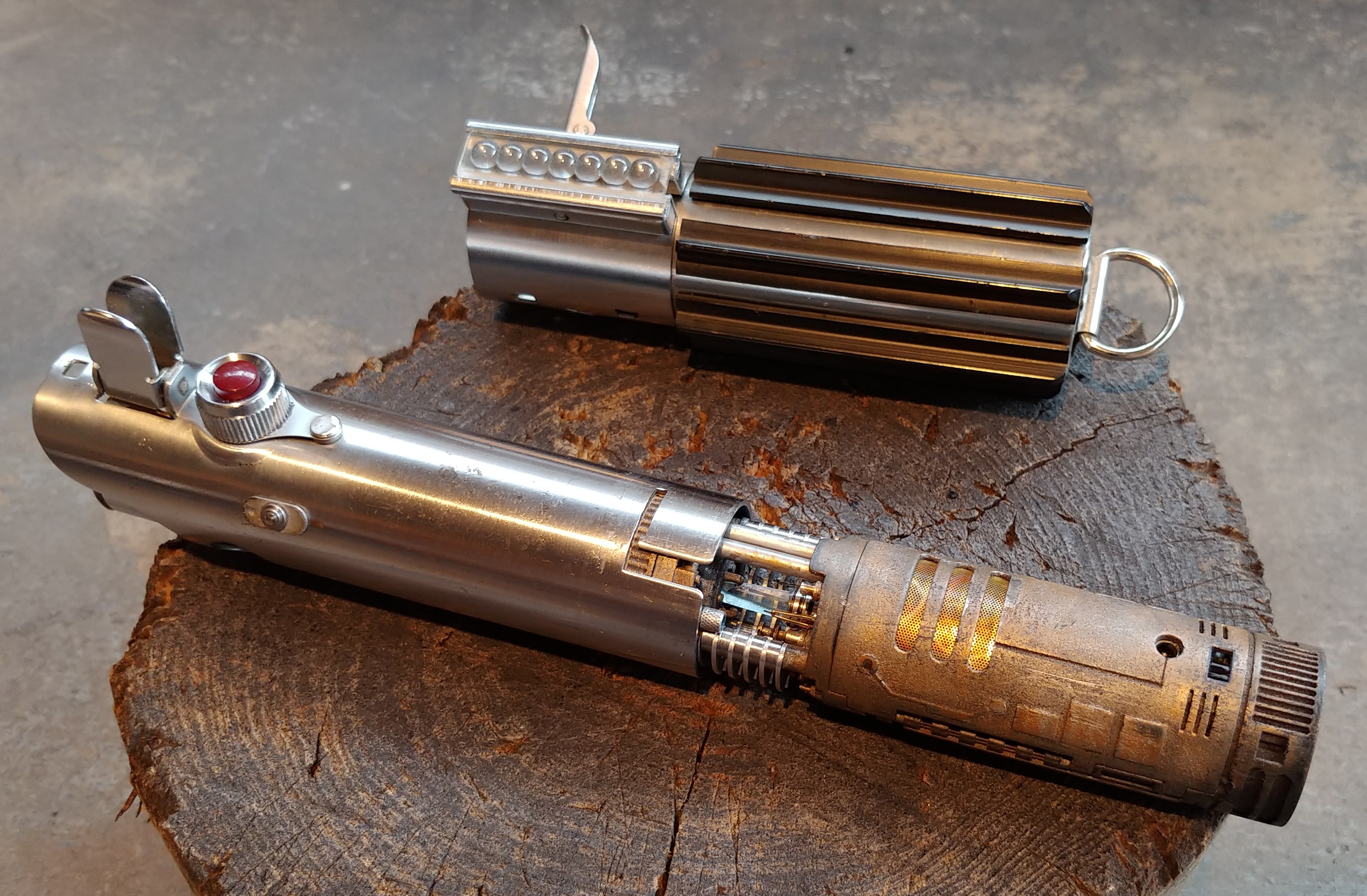 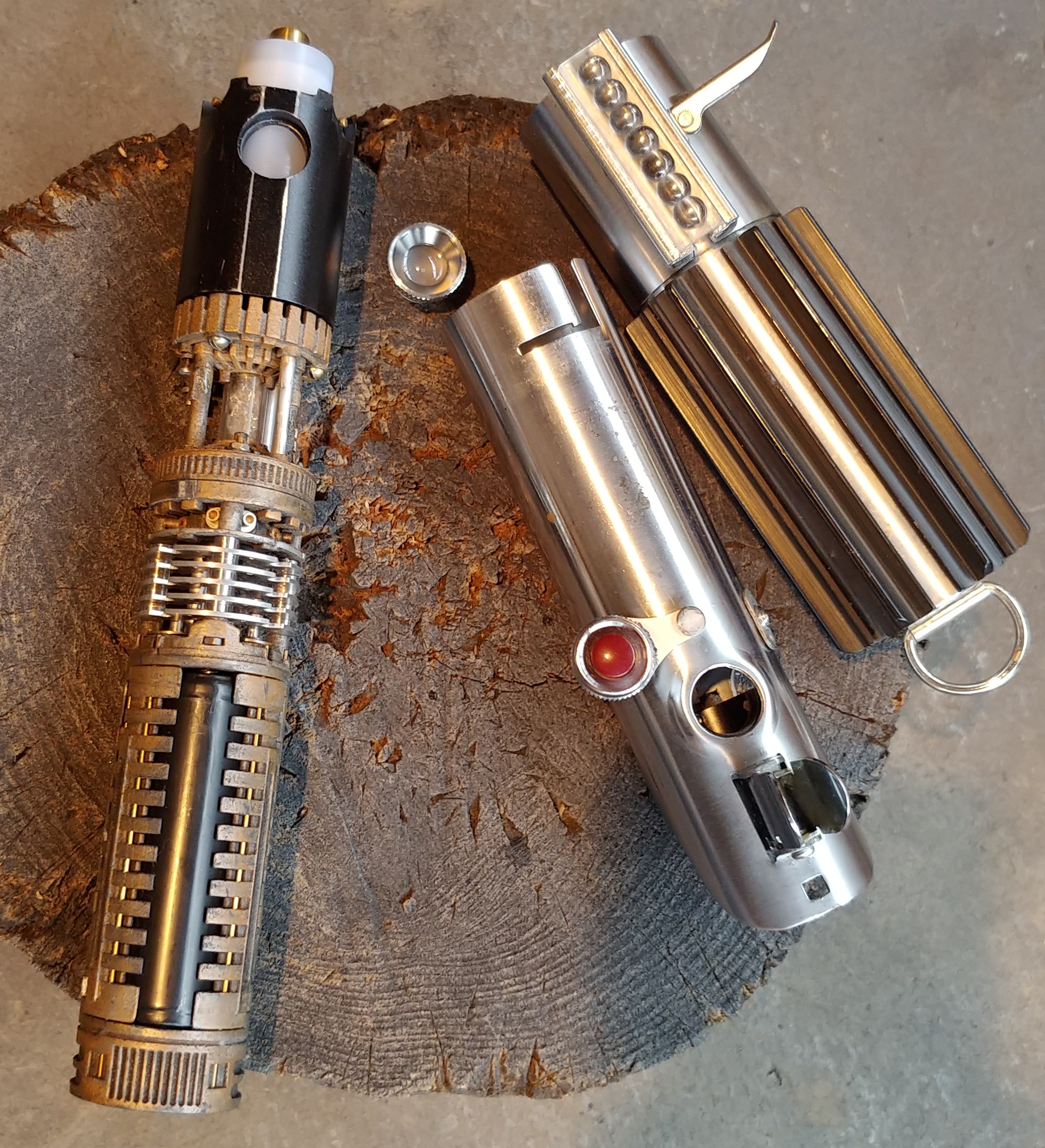 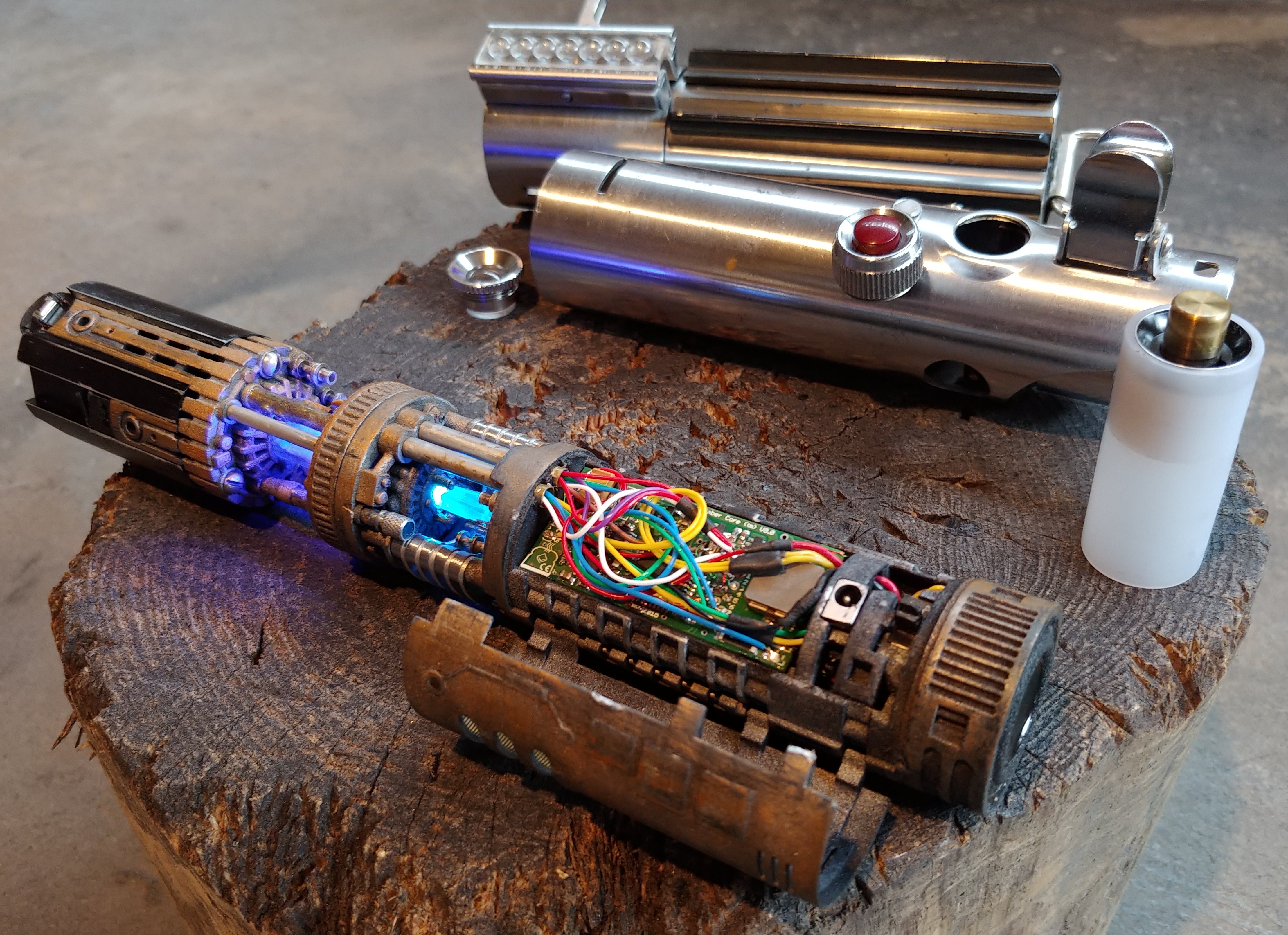 I love the hinged cover design, it snaps shut with a satisfying click. And the battery is removable (one of the main selling points for me, for quick changes, so you don't have to wait while the thing is attached to a charger), though there's a charge port, too, if you prefer that sorta thing. I like Martin's thinking with his designs. 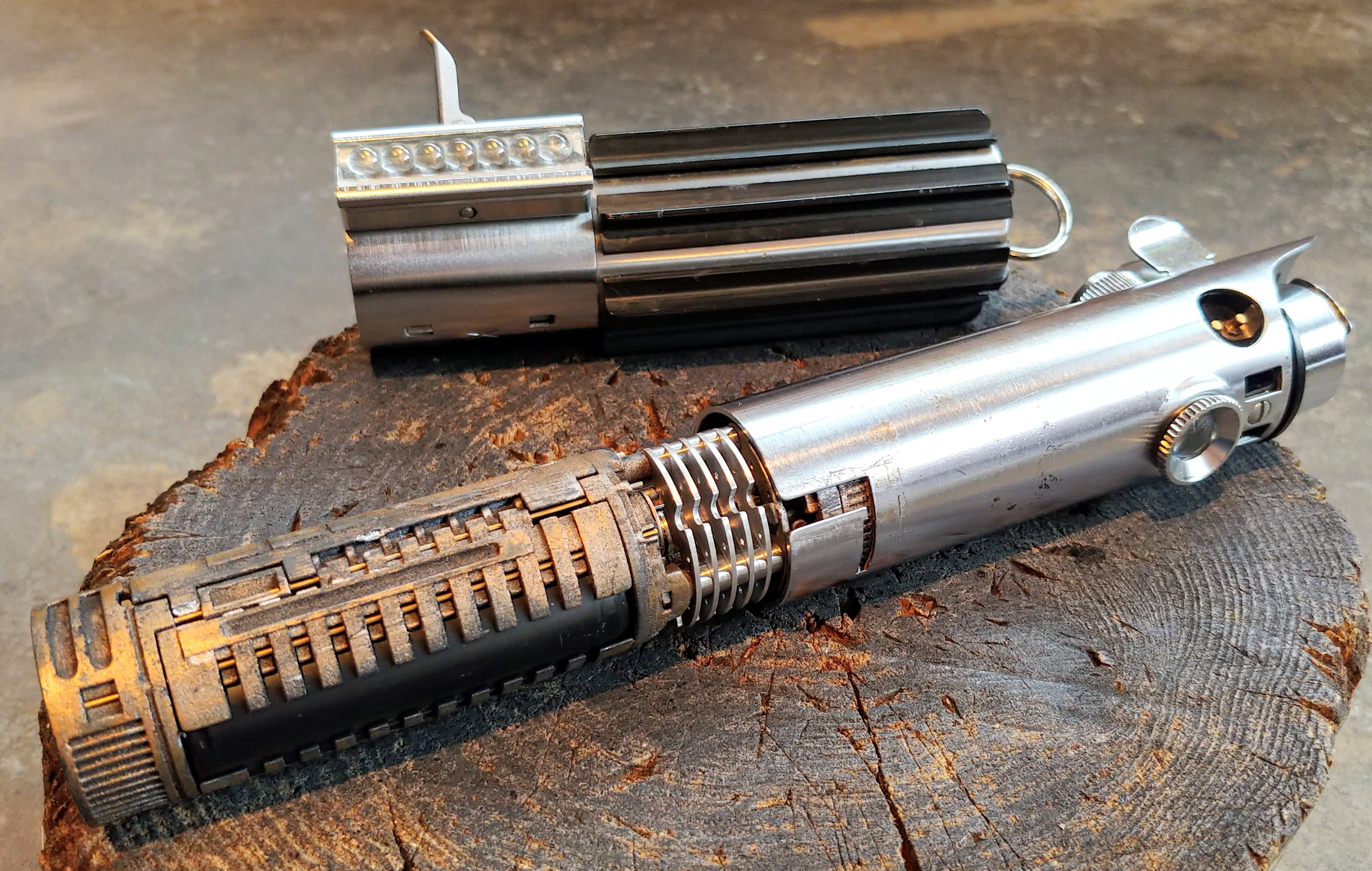 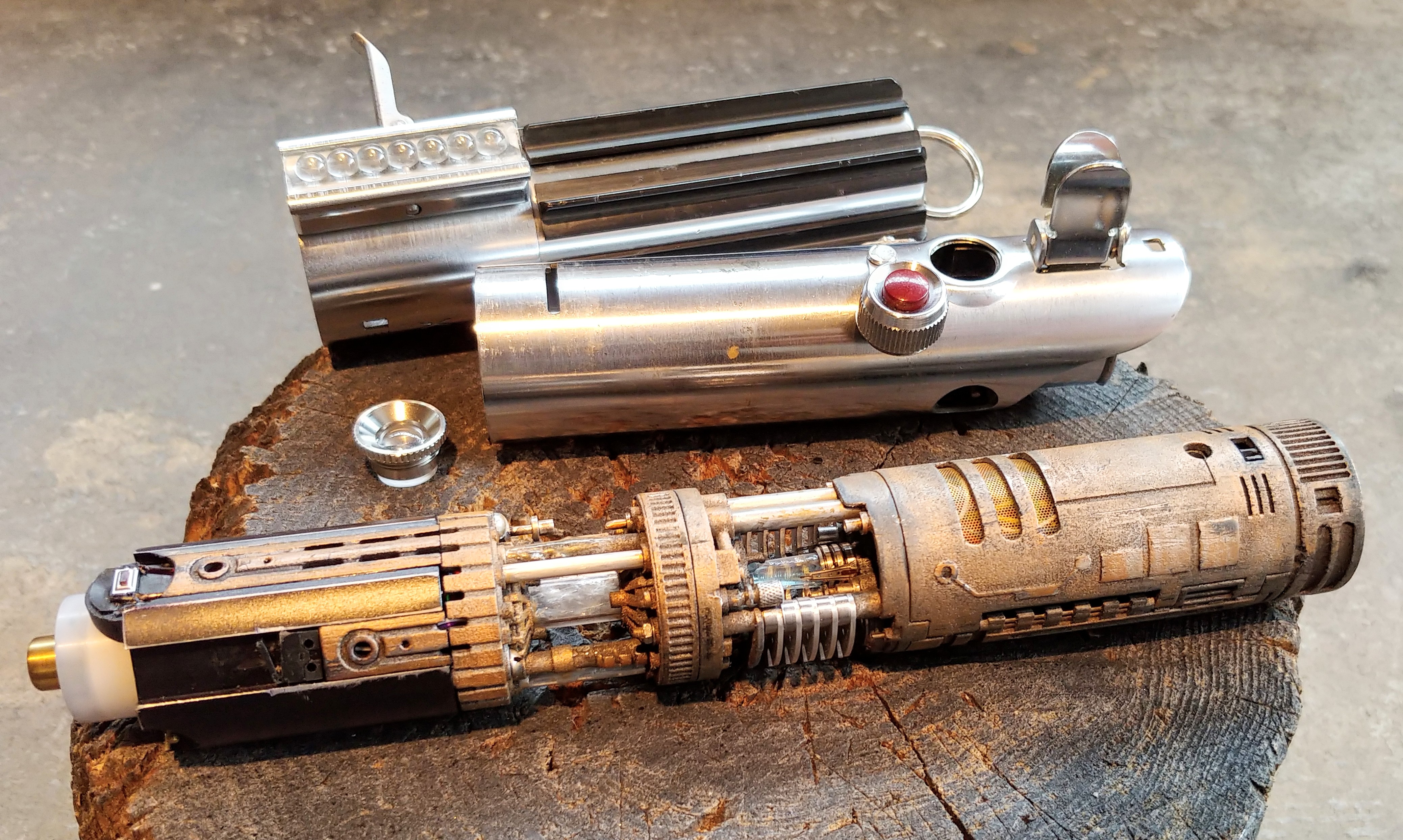 All the wires are fed through the aluminum or brass tubing, keeping things nice and tidy. 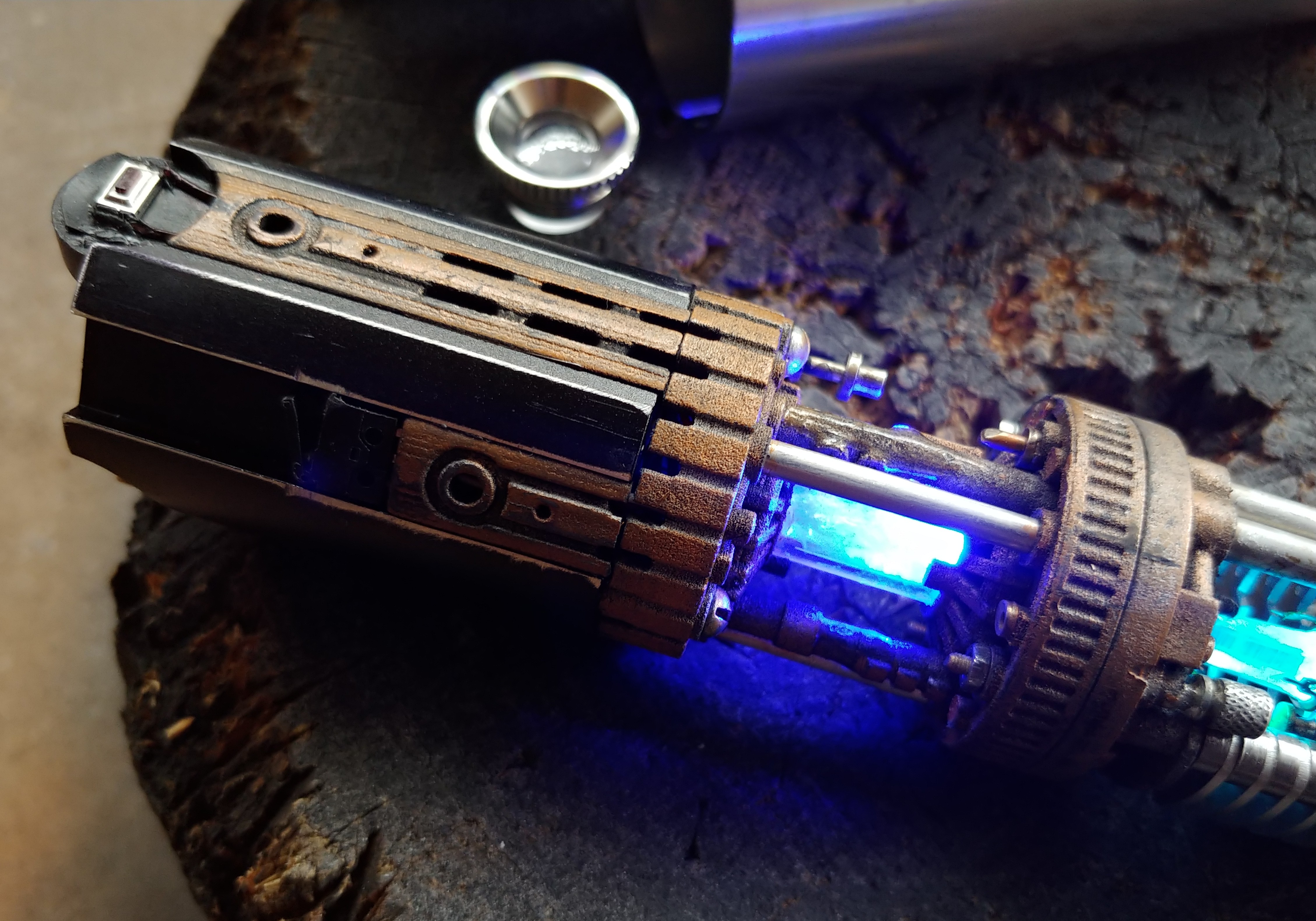 When I ordered the printed parts for the kit, there were a few options for printed crystals, but I found my own real "Aqua Aura" quartz crystal on eBay. And that upper lighted section Martin calls the "plasma gate". He has obviously made improvements in that area since my version, but on mine it's some polycarbonate tube with shrink wrap crumpled up and lit by accent LEDs. By the way, the crystal is lit with an RGB LED, and kinda pulsates while in standby mode, then when it's "ignited" the Crystal LED mimicks the blade. It's all in the Crystal Focus board programming, but you have to set it up yourself and tweak it and whatnot. 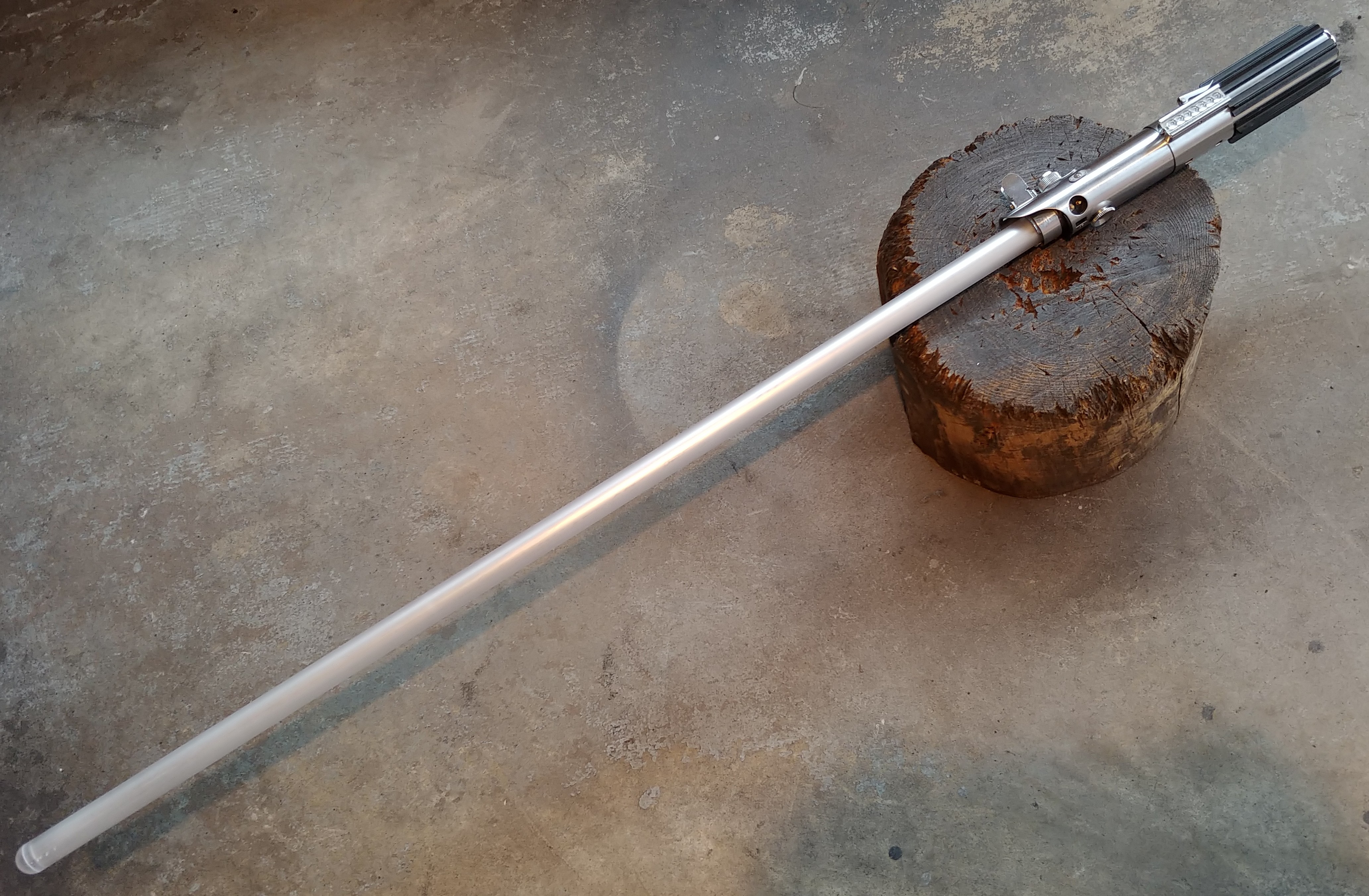 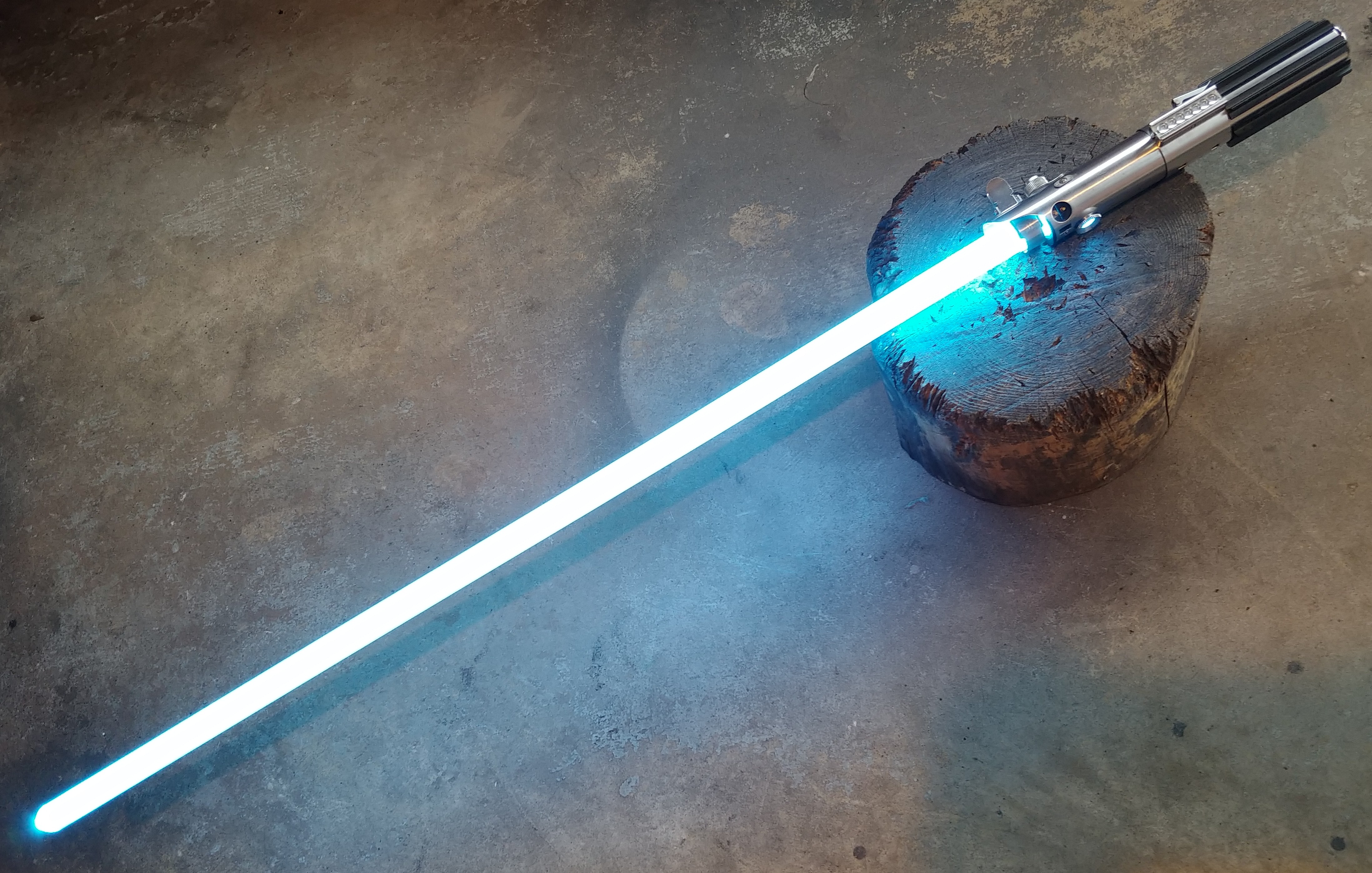 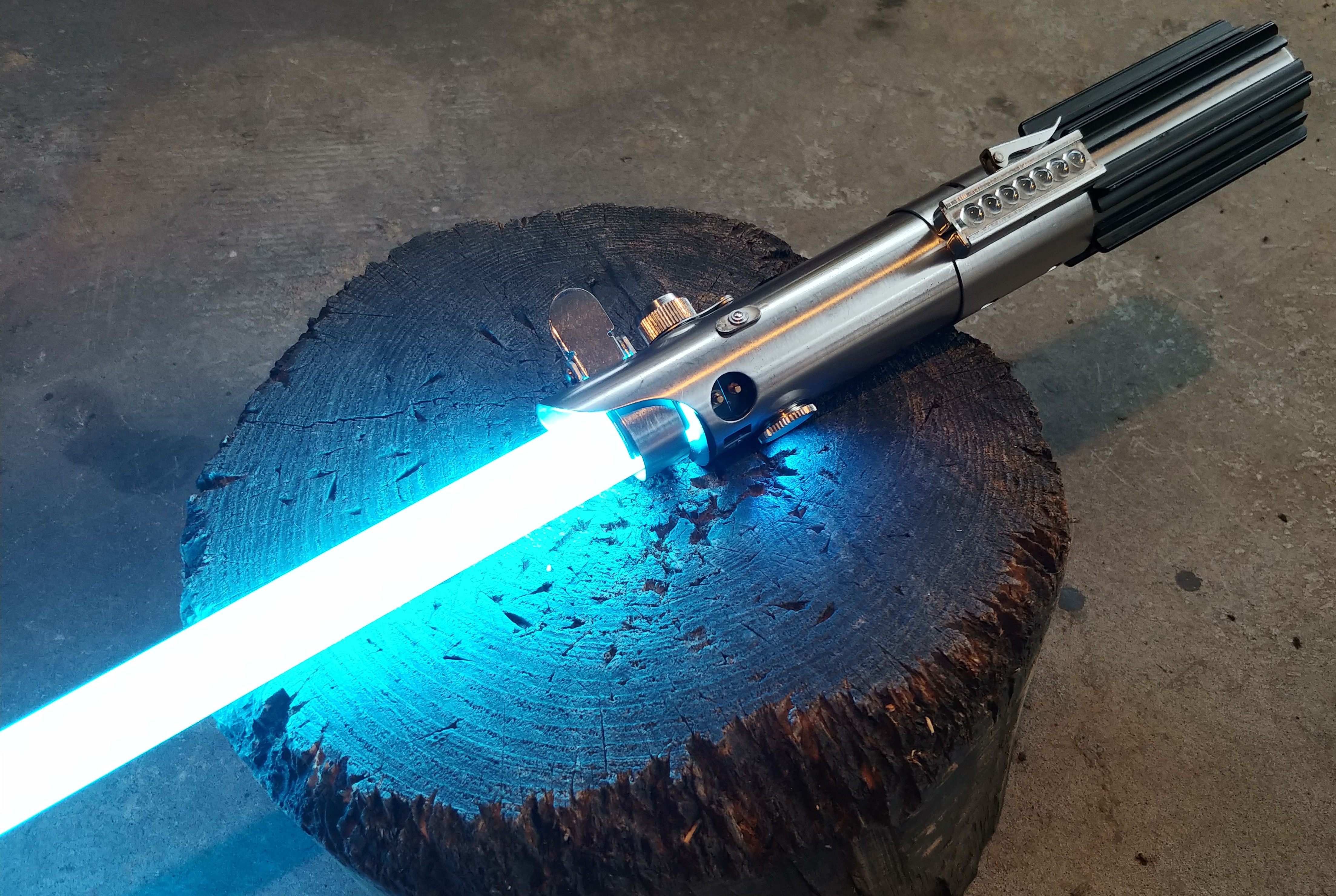 It's a Tri Cree Blue/Green/White, so I can get that Cyan that I like (most folks just go with Blue/Blue/White, and that's just dagummed SILLY to me!), and it's got "Flash on Clash", so the blade flickers different colors when it's struck or caught in a "blade-lock". 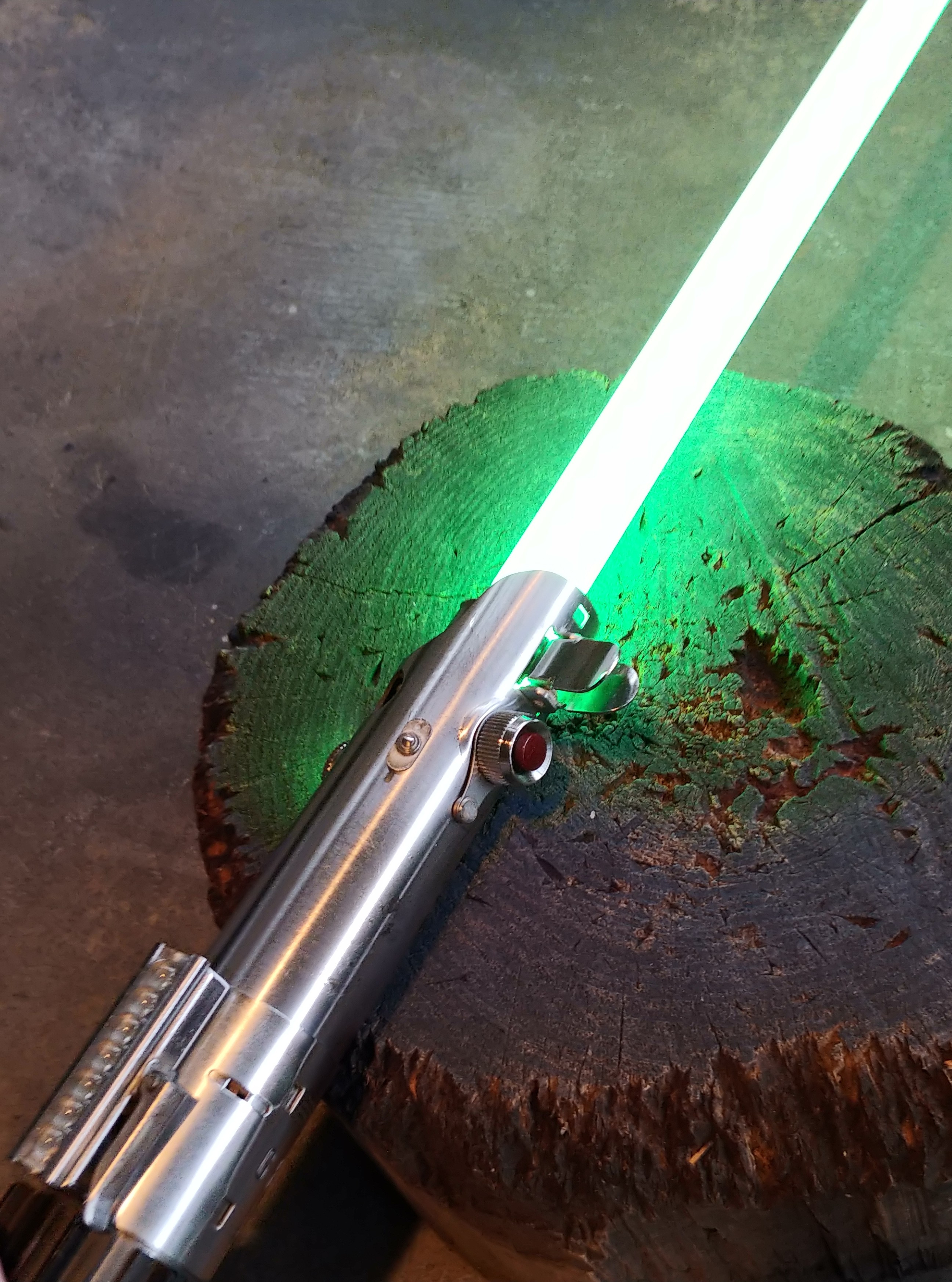 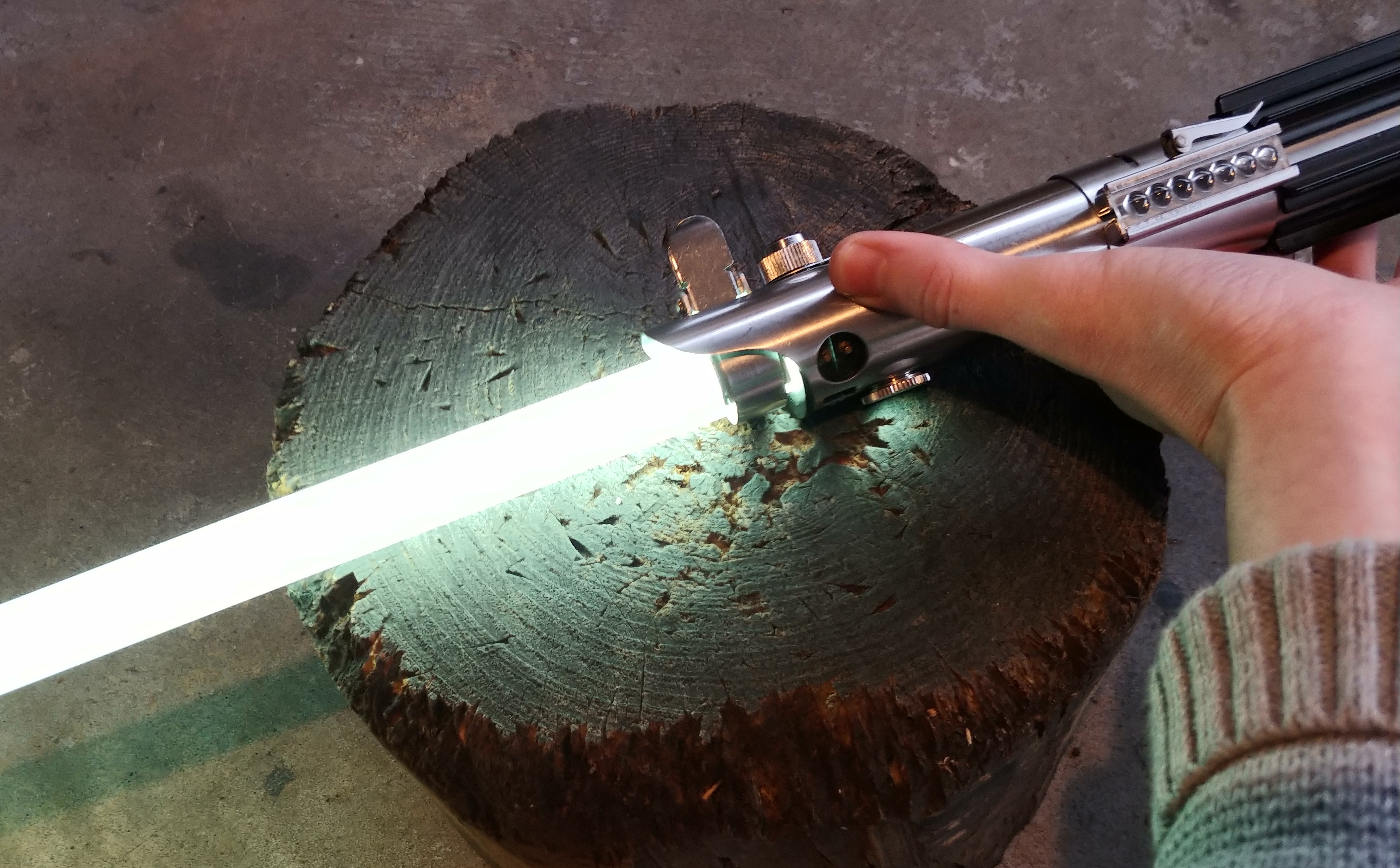 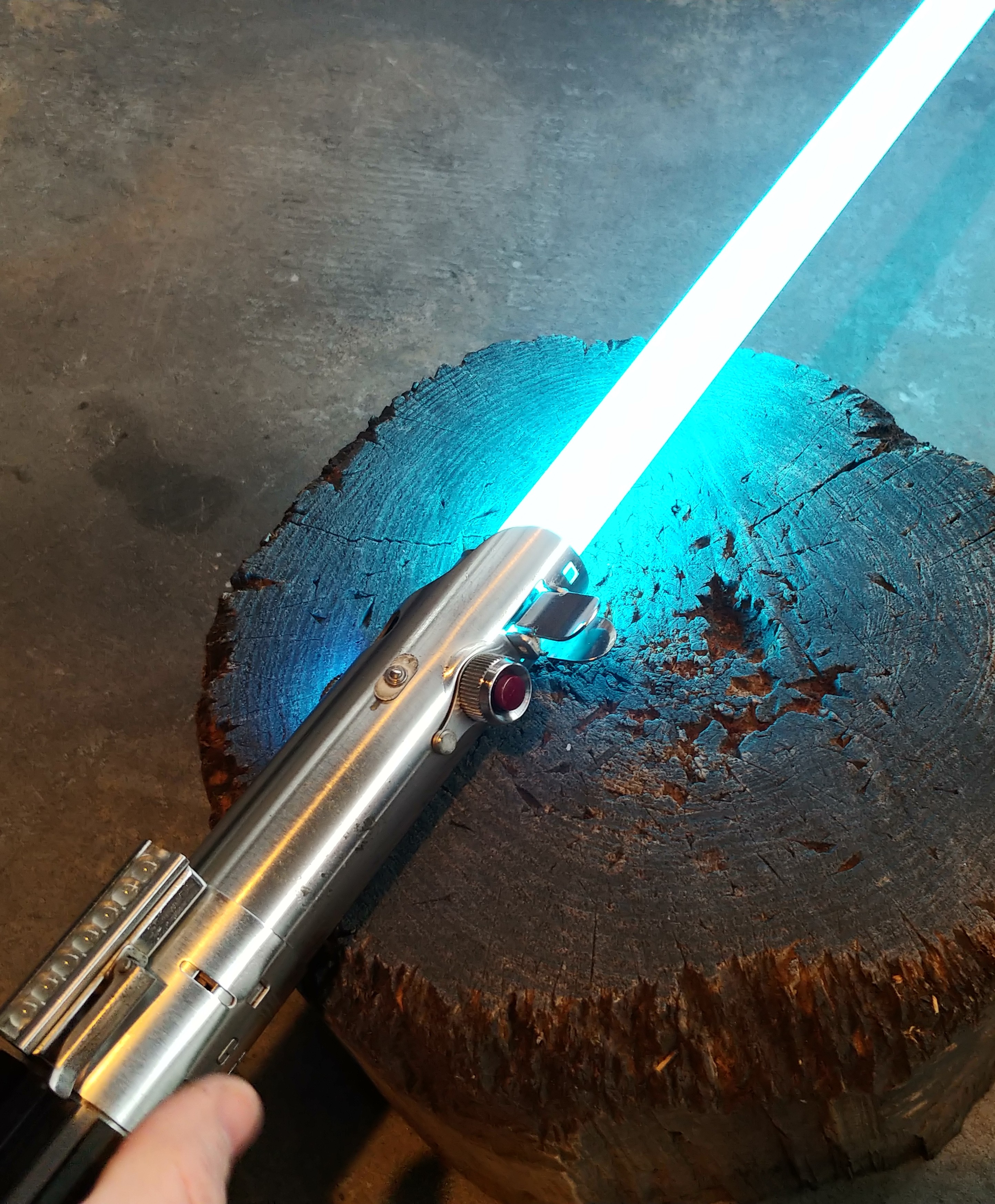 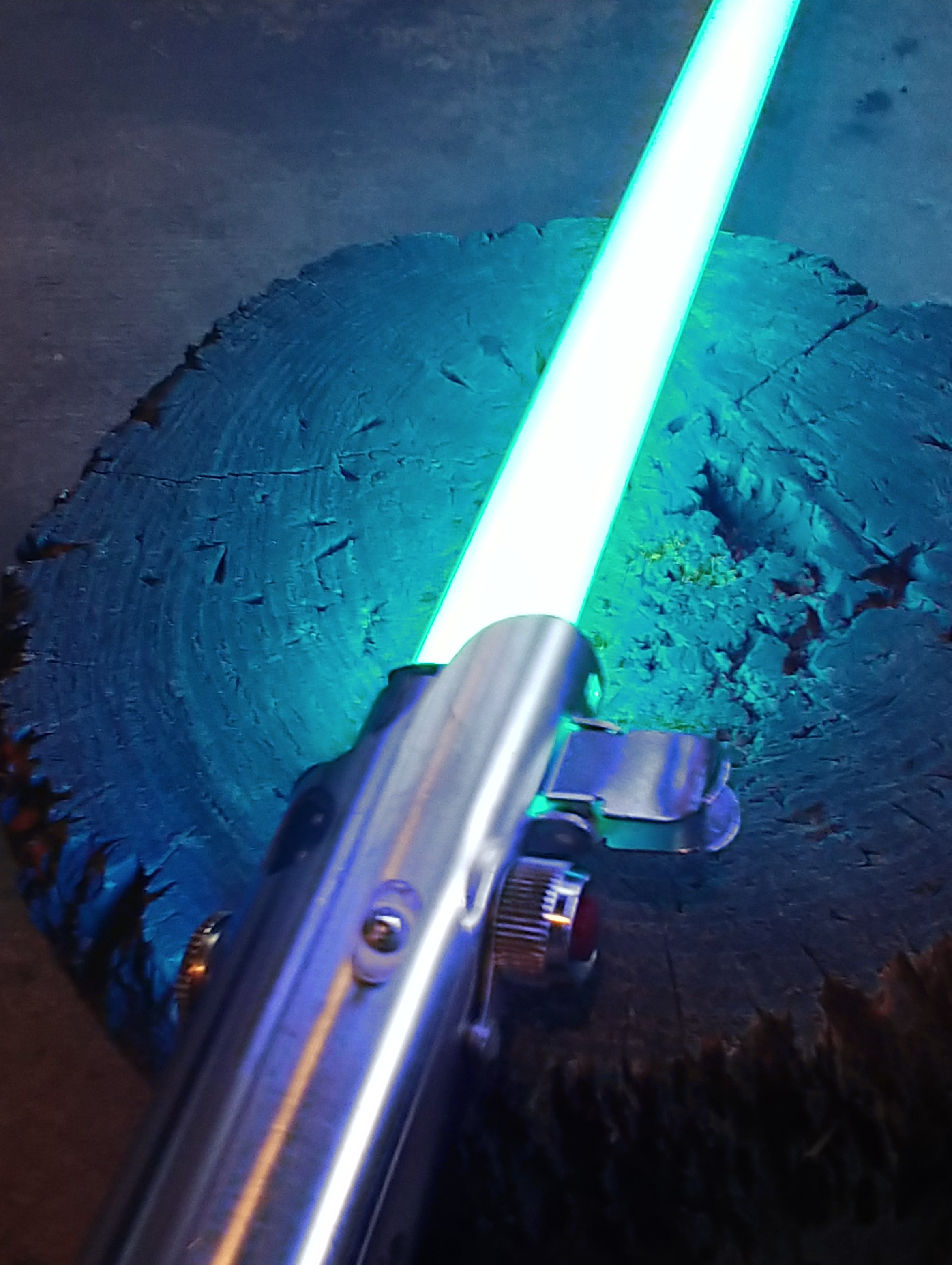 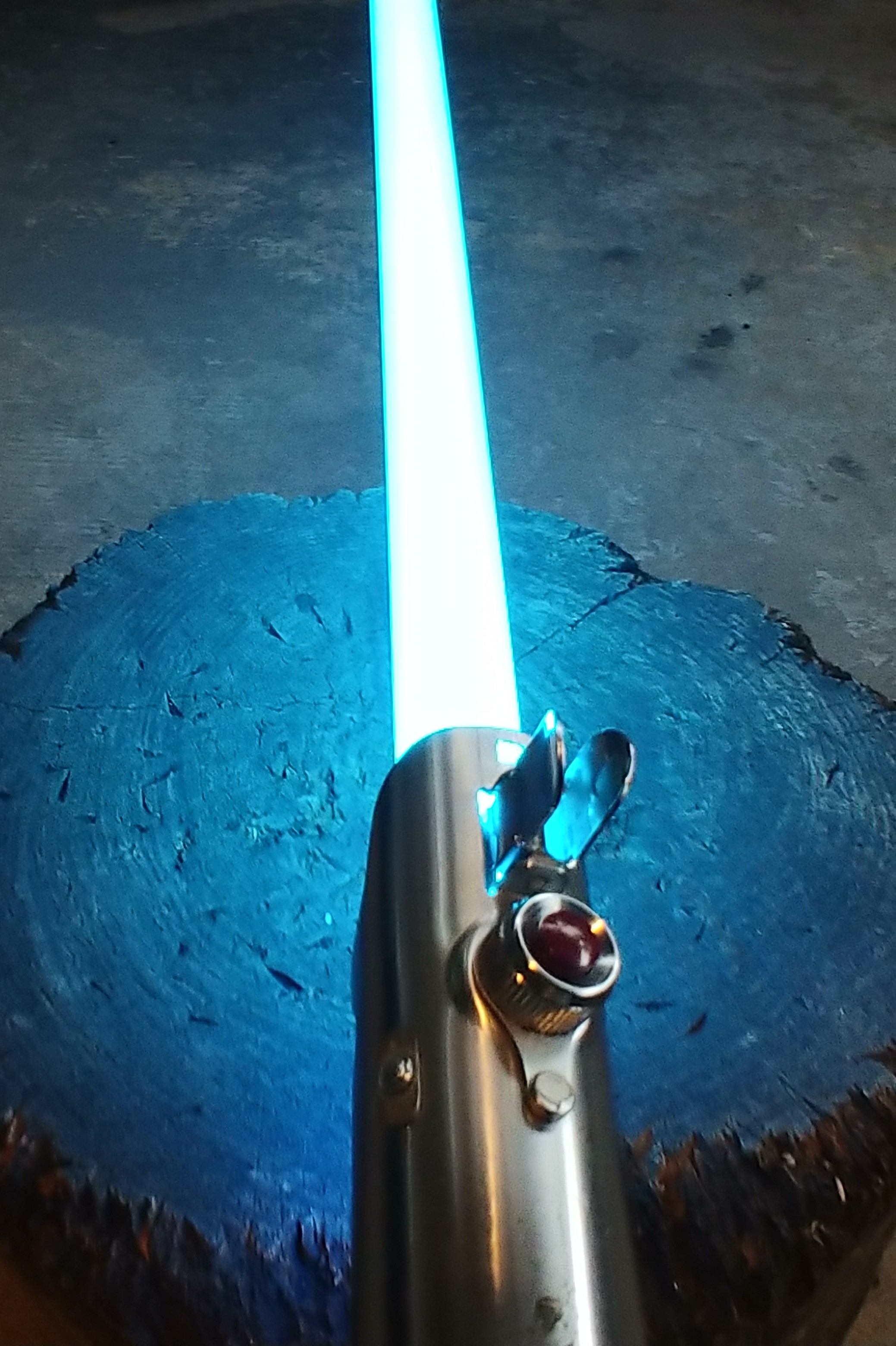 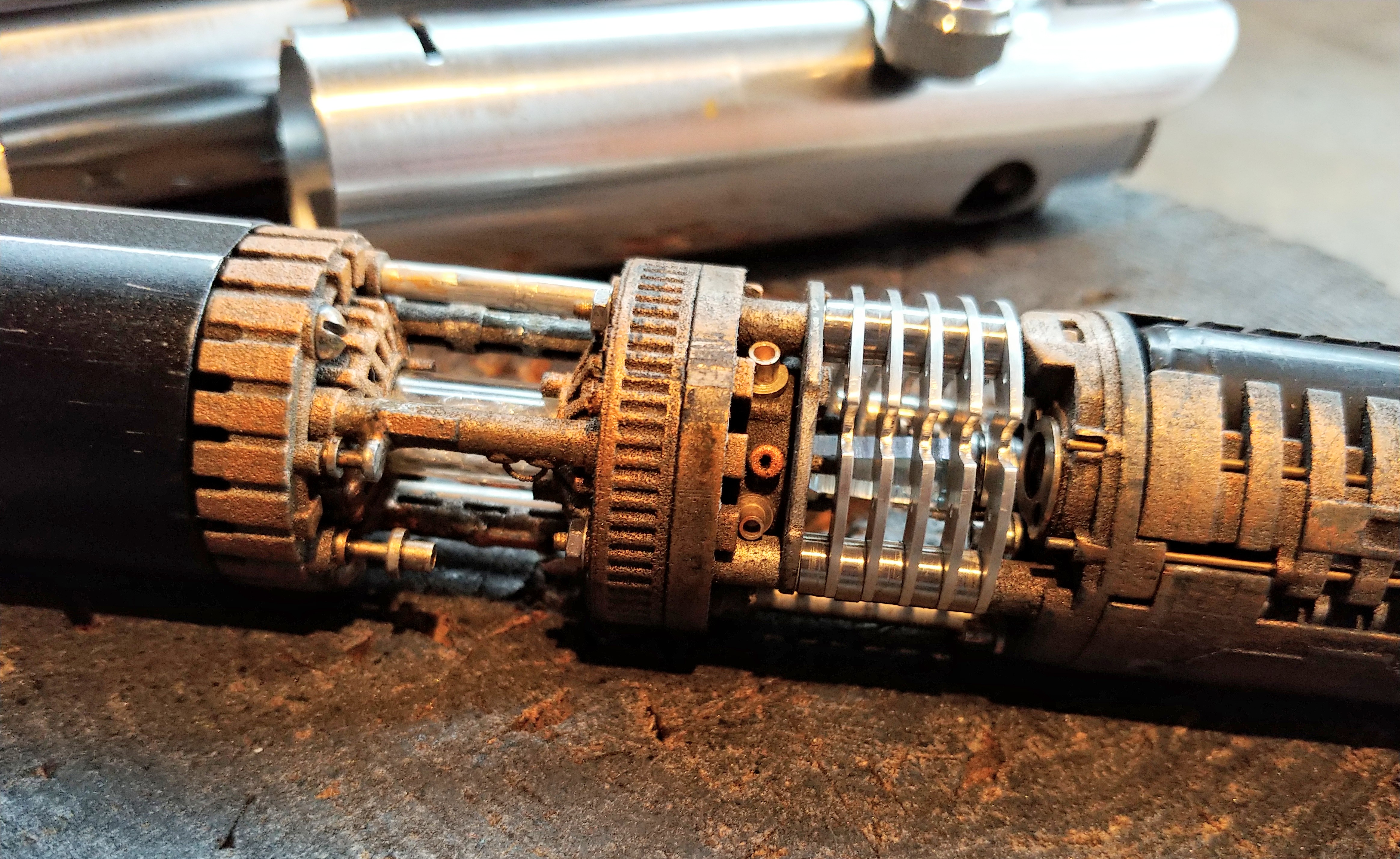 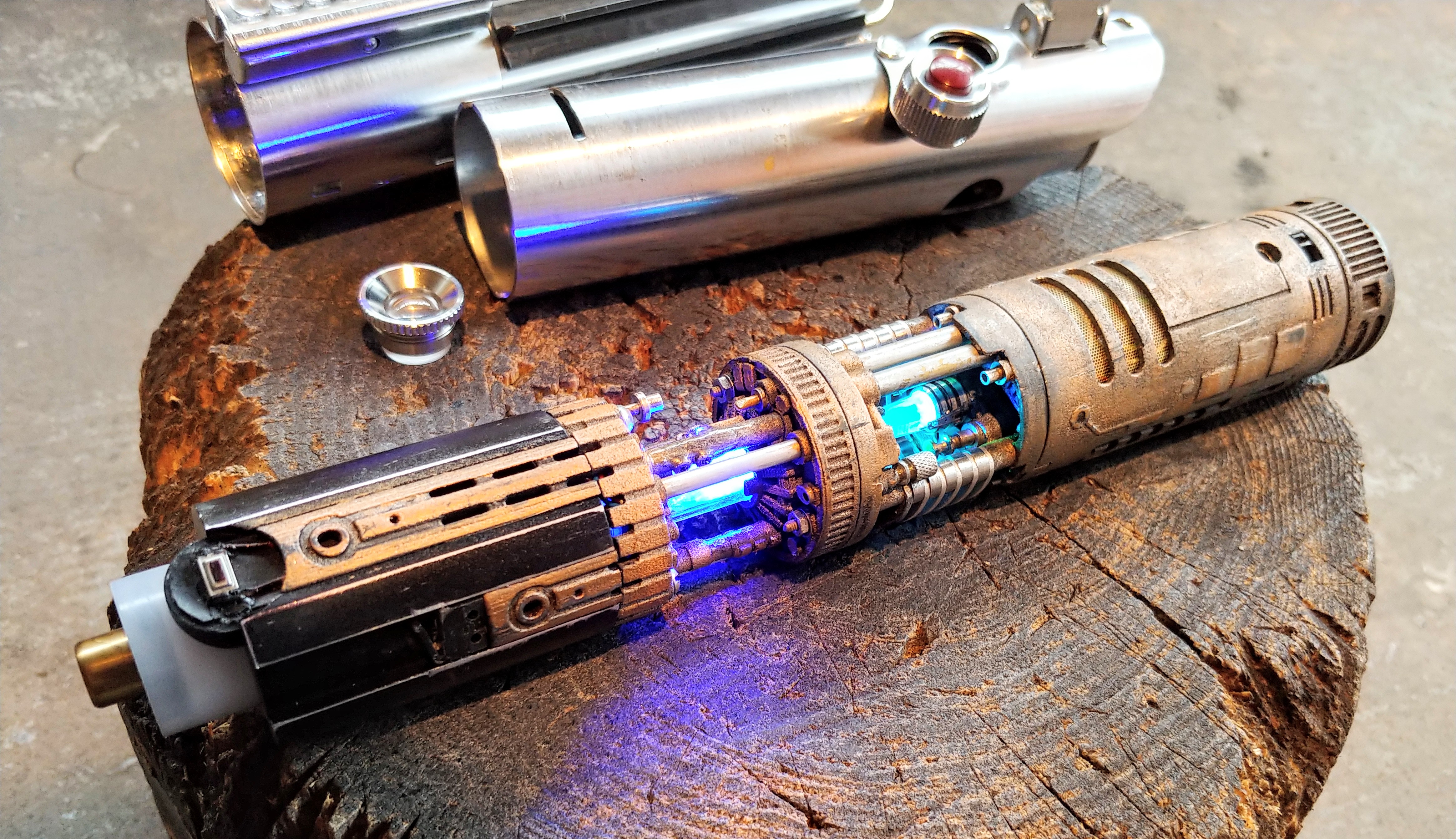 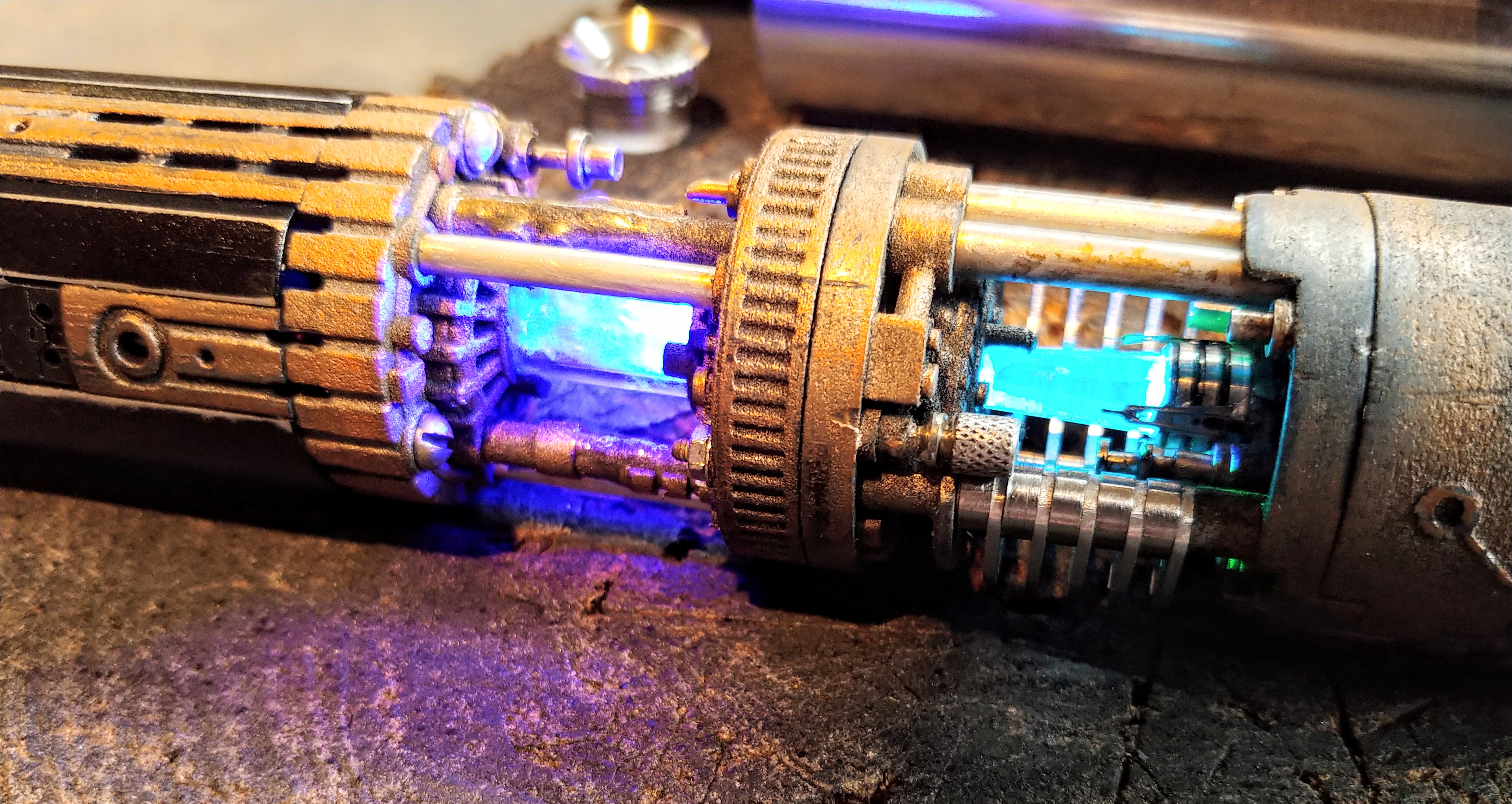 Most of the greeblies are mine (anything that isn't printed), and I machined the little holder for the crystal and the spacers for the "fins". 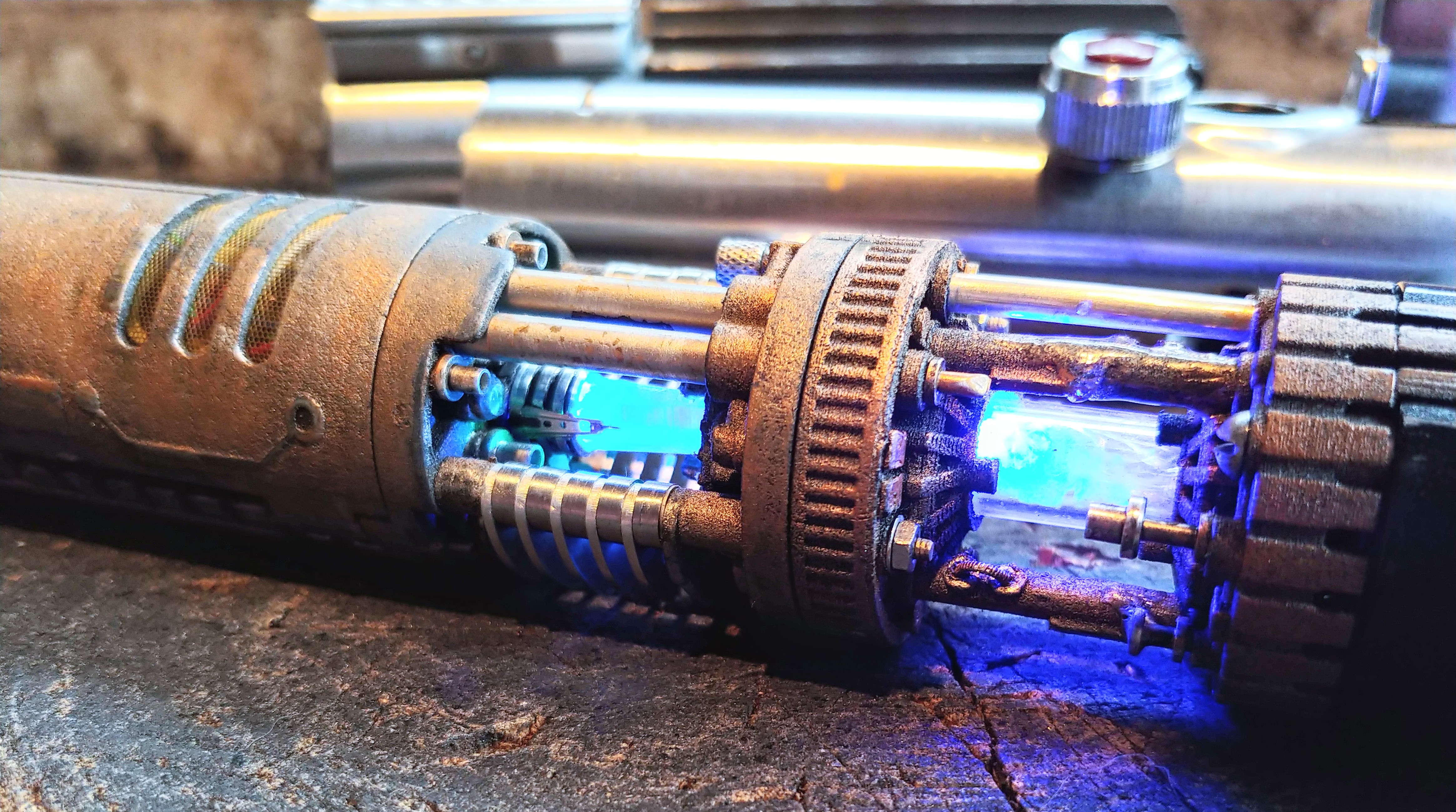 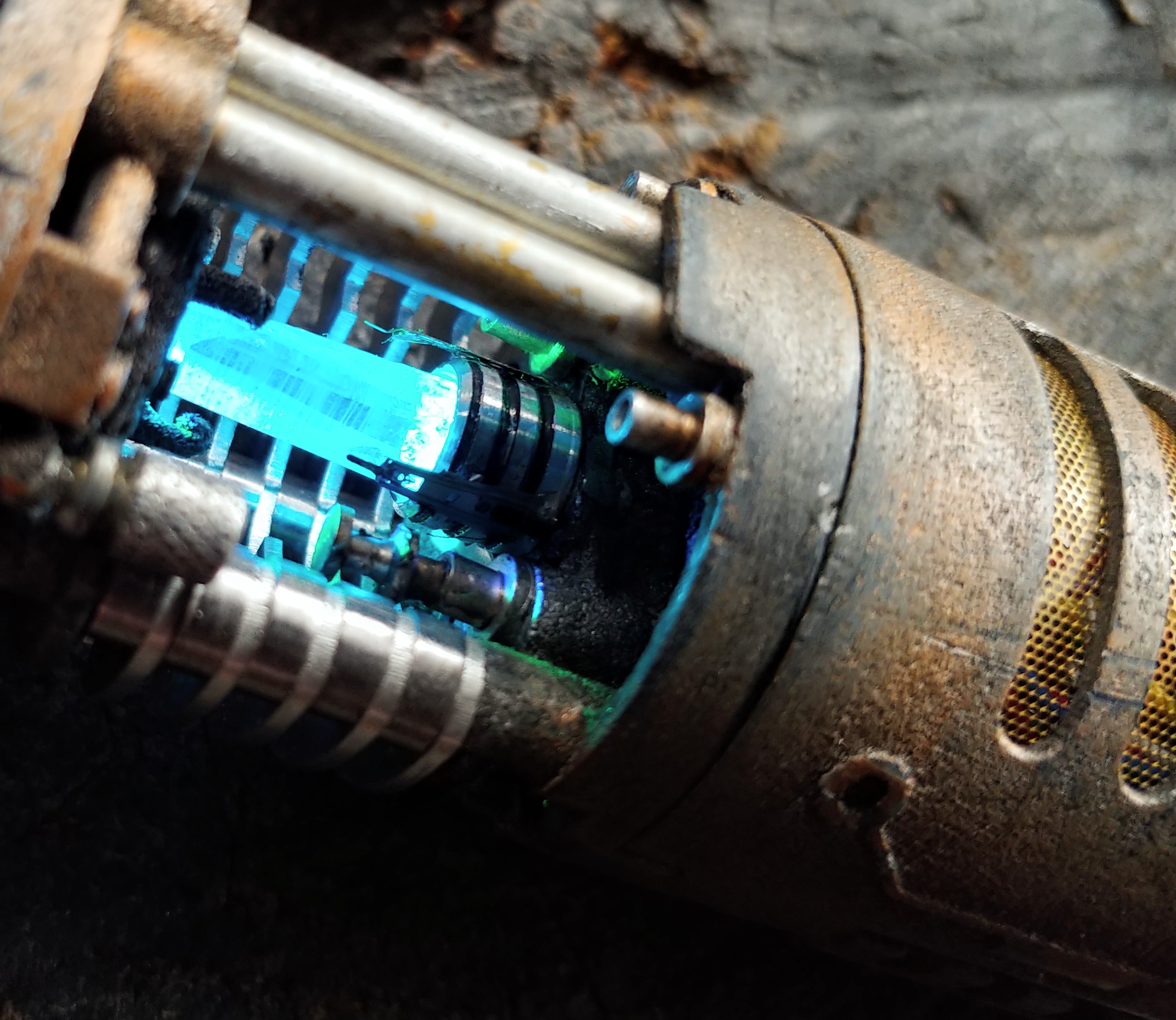 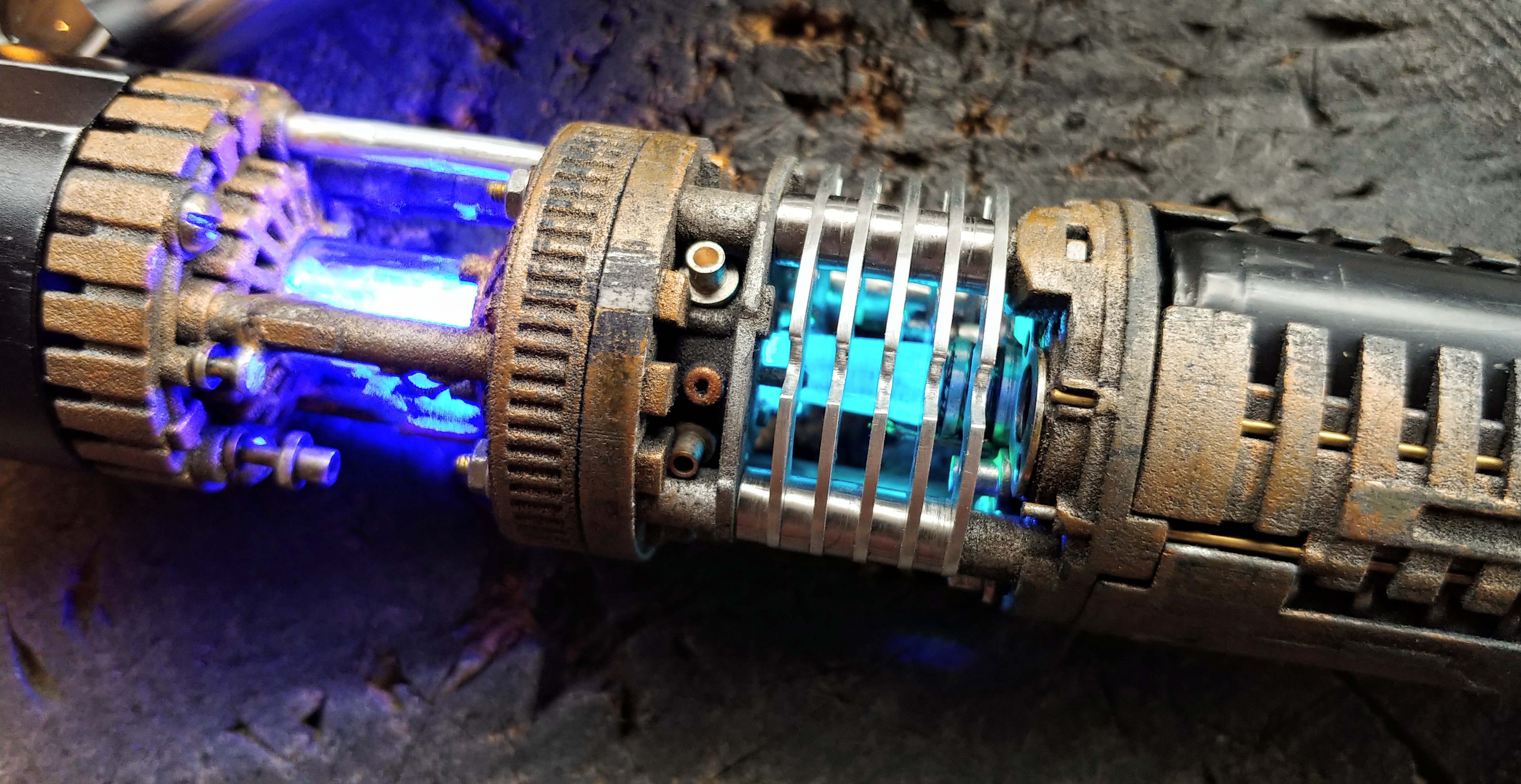 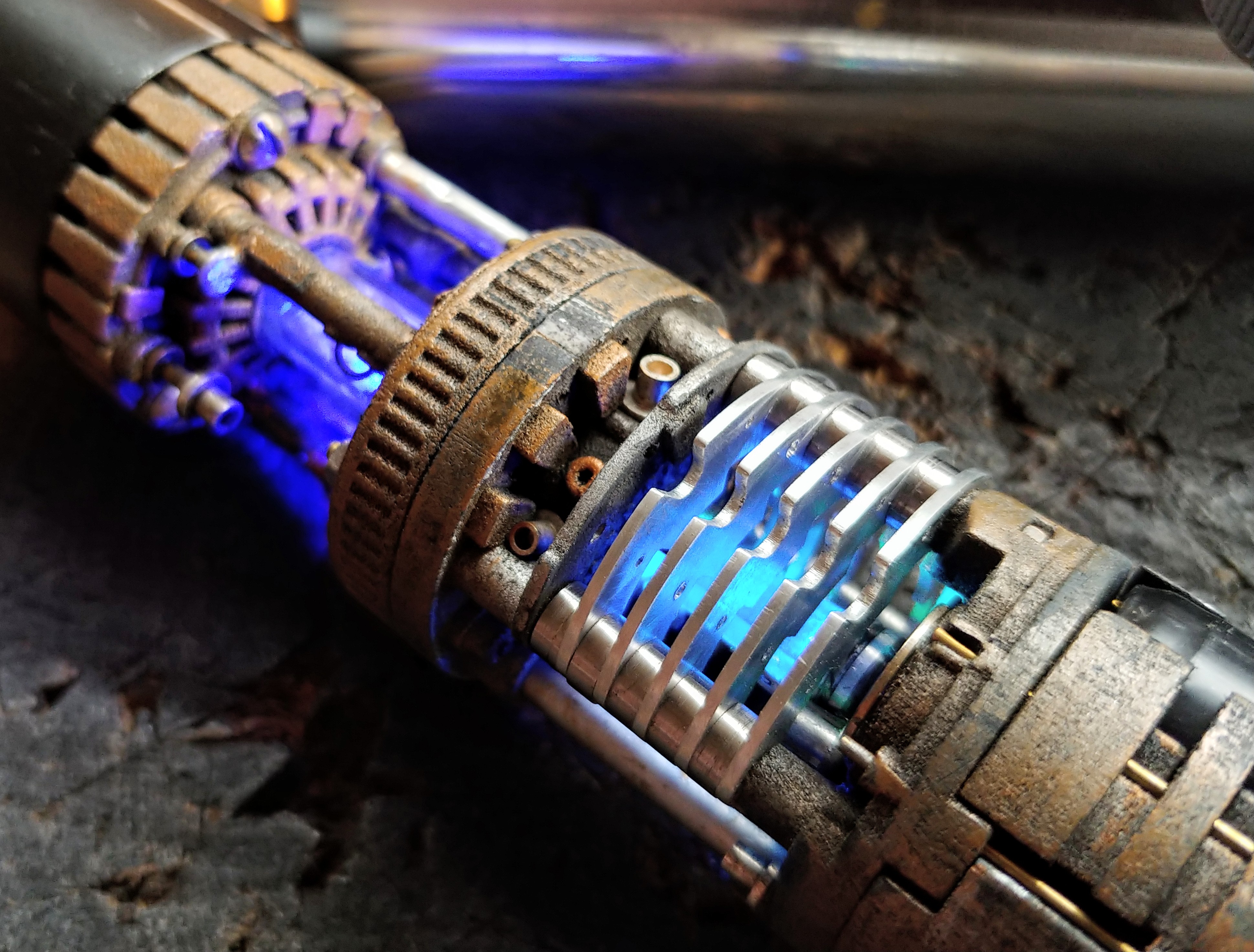 There you go! I tried to upload a video but it was too large.

... And now only something like two years later, Martin drops this bomb on us, and I'm completely blown away by his newest design! I mean jeez, I look at mine and I'm like "man, now that's a nice looking highly detailed set of lightsaber guts that I've assembled and finished!" And I look at that video up there and I just can't even. That's some next level shish, right there! So in awe of Martin's skills.

It was fun, but it kinda burnt me out on electronicized lightsaber props for awhile!

Shortly after I finished this, the whole Teensy/Proffie board and "Smooth Swing" bomb dropped, and I haven't messed with any of that stuff, yet. Hopefully I'll be able to soon, I've just been working on so much other stuff lately!