Ghostbusters Lifesize Slimer statue comes back from the dead!

RPF PREMIUM MEMBER
Years ago, Steve Johnson's XFX studio, the original creators of Slimer for Ghostbusters, created a lifesize prop style statue for their lobby. Sculpted by Andy Schoenberg, the full scale (1:1) statue was always my favorite representation of the original 1984 film's ghost.

Many years later, the lifesize figure was damaged beyond repair and an RPF artist salvaged what he could of that casting and created a set of molds from it, ultimately allowing the piece to live on in the form of a "kit" of parts that could be assembled to once again create the ghost!

We were honored when Steve asked us to take one of those kits and assemble and paint it as decoration for his new studio, Brick and Mortar Productions, where he is now proudly displayed!

Some pics below, but we've posted a ton of pics as we've worked on this and others on our Facebook page, so you'll find a bunch of great shots there - https://www.facebook.com/TomSpinaDesigns

And you'll also find a gallery on our site - http://www.tomspinadesigns.com/ghostbusters-slimer-lifesize-statue-movie-prop.html

Hope you like the pics and don't hesitate to drop us a line via our site if you'd ever like similar work done!

Melissa and Maria painting at our shop, gives a good sense of how big this guy is!

The finished statue - anybody seen a ghost?

Note the arm seams - we left the arms removable to save a bit on shipping for Steve's statue, as he was (obviously!) able to seam them himself after delivery. 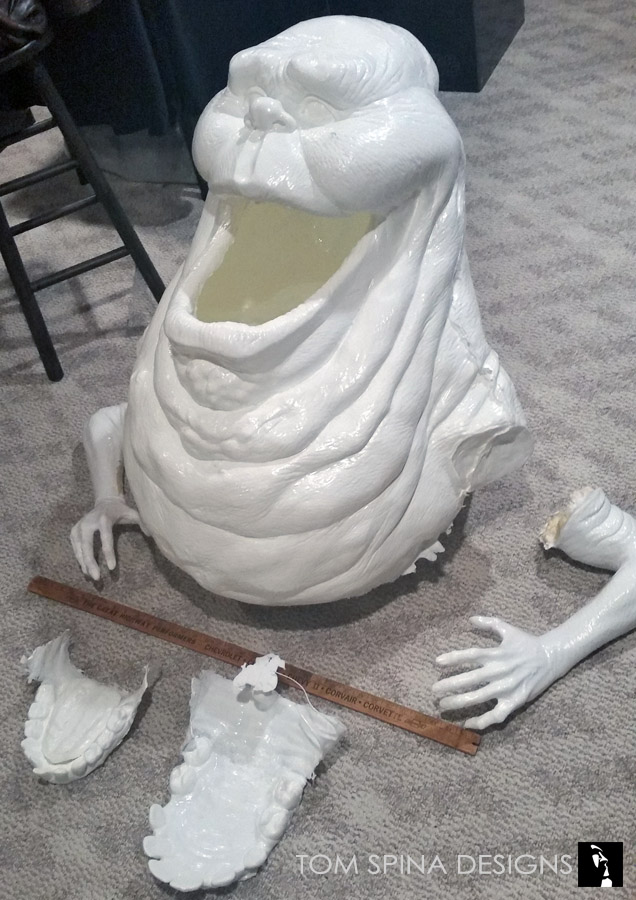 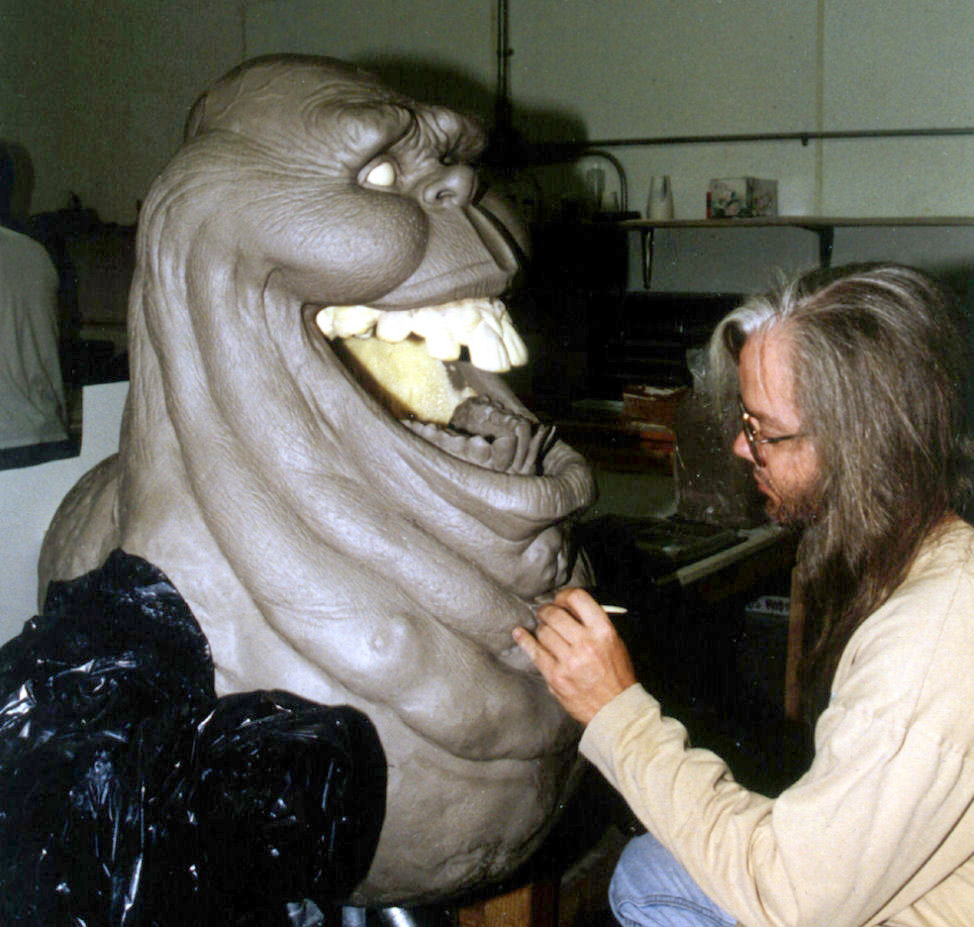 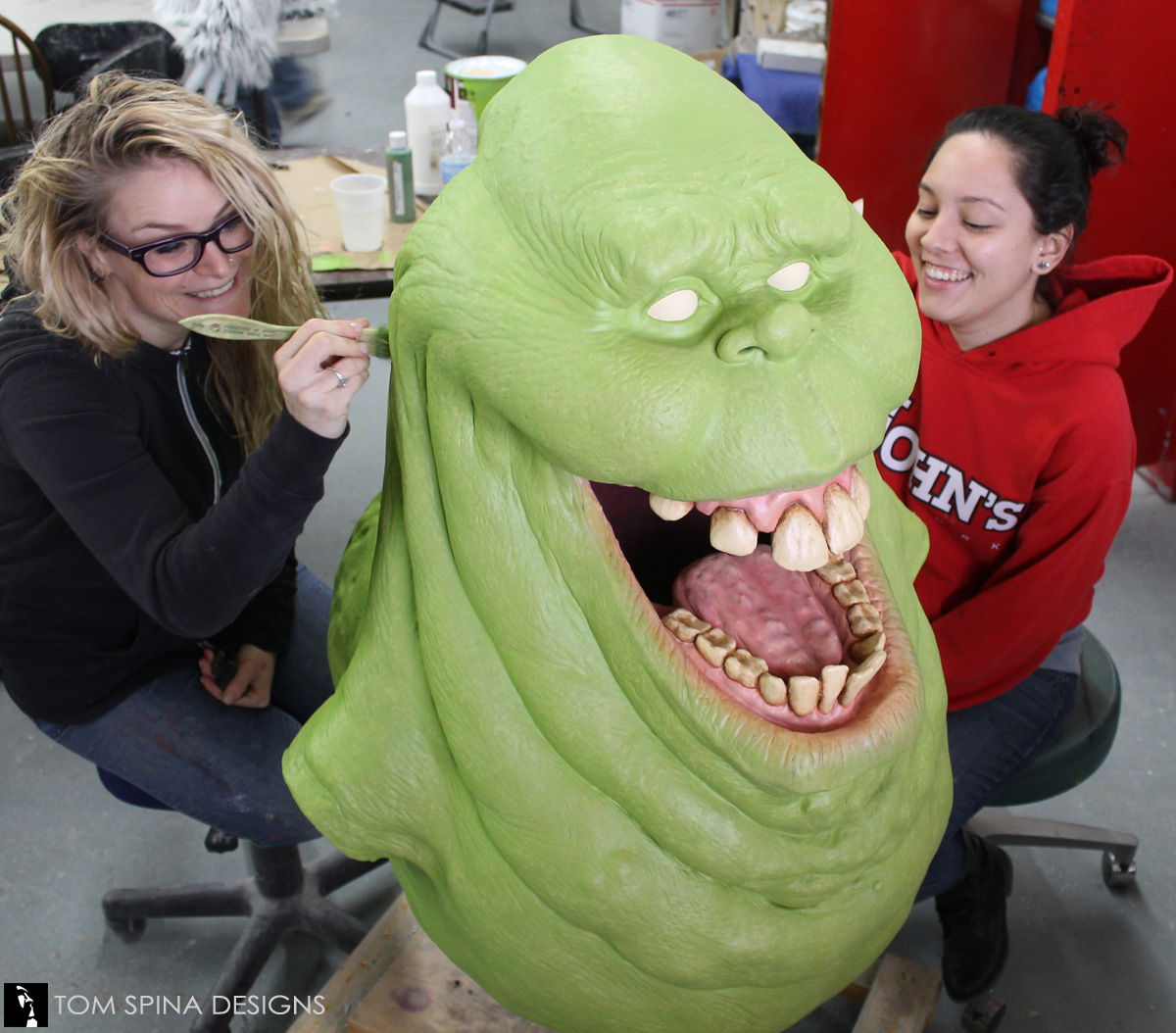 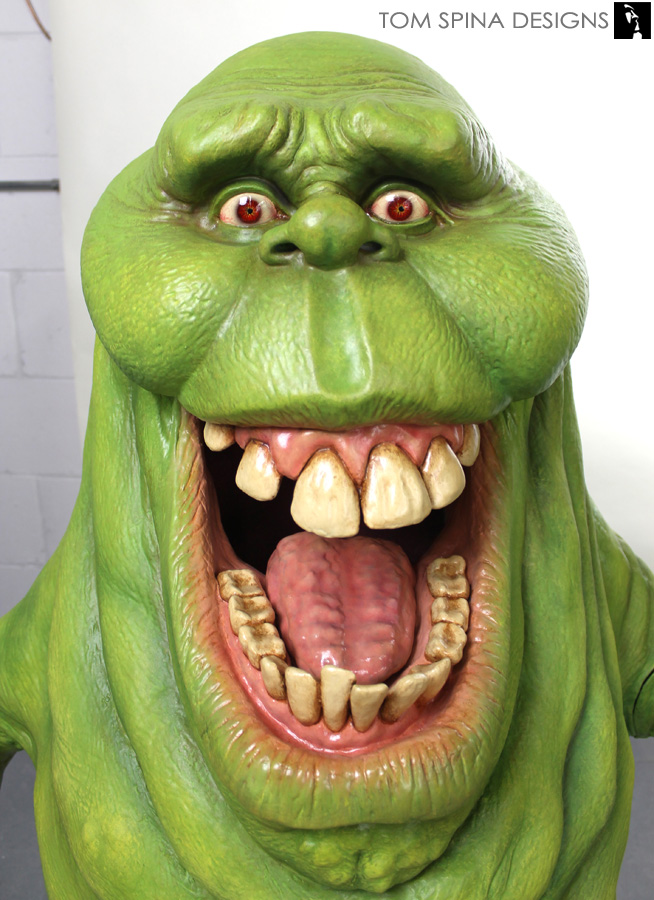 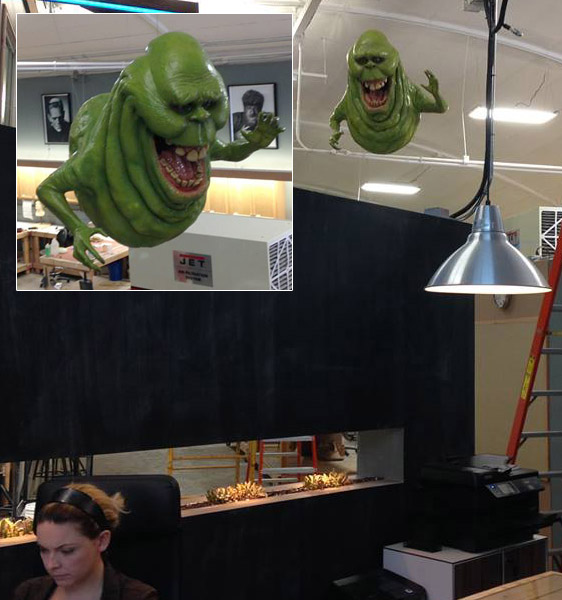 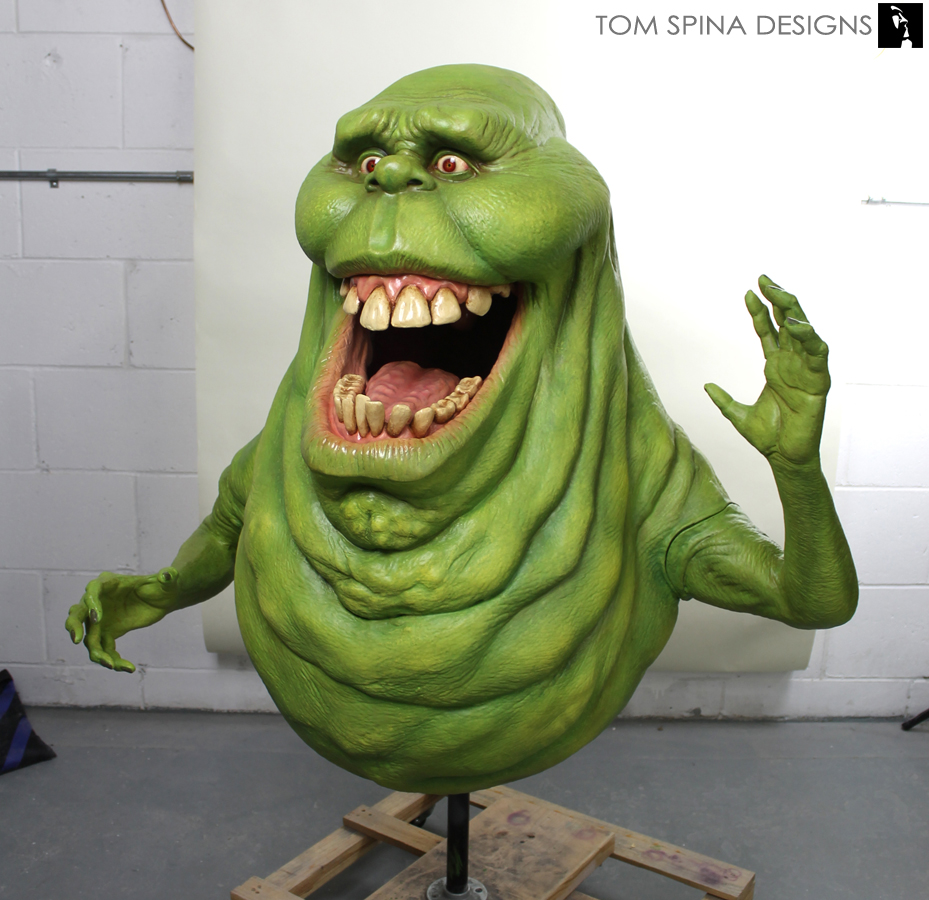 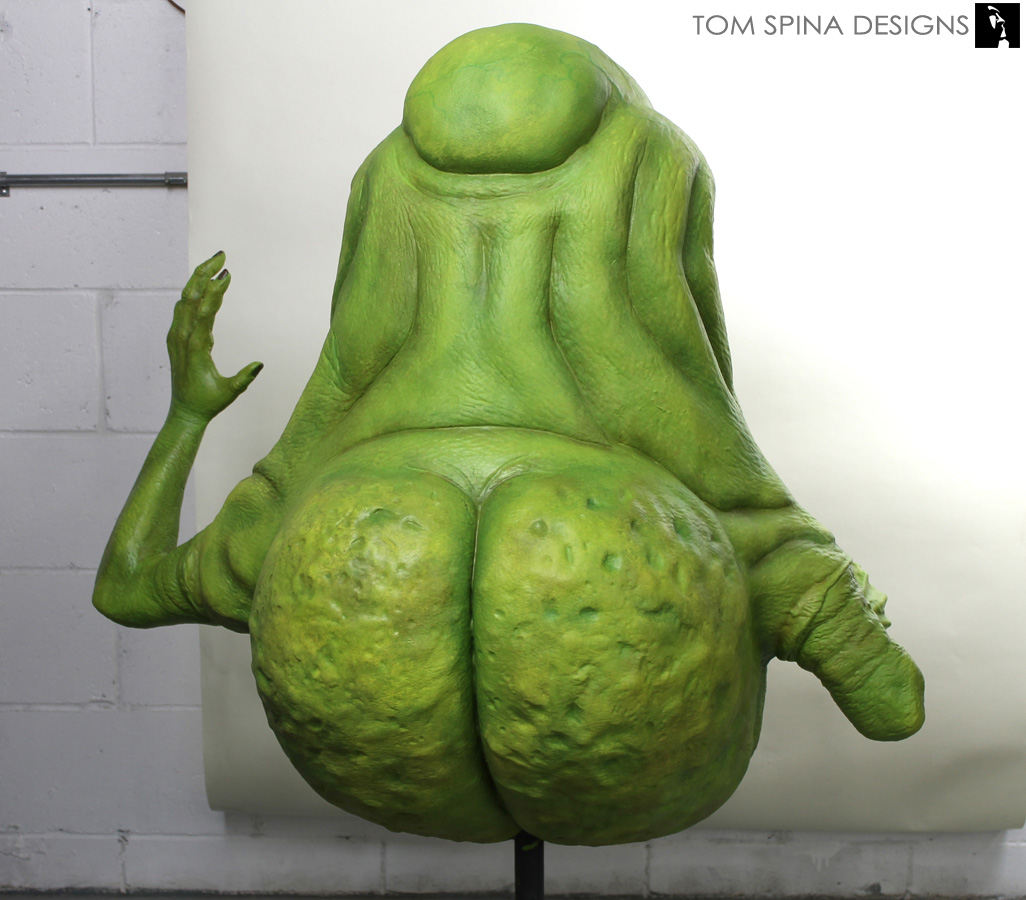 RPF PREMIUM MEMBER
Killer job as usual. Now.... Where can we buy a kit?
D

I had no idea Slimer actually had a butt! Lol!

Wolfsburg said:
I had no idea Slimer actually had a butt! Lol!
Click to expand...

That shot always gets a reaction!

Thanks guys, we had a lot of fun finishing Slimer! Here are a few shots of how one looks with the arms fully seamed up. I just love Andy's sculpt on this. It's such a fun version of the character, but still feels like the first film prop (which makes sense considering the source!)

Amazing! And, where can we get the kit?

Saw the one at Steves previous place. Didn't realize the history on the piece. Too bad its not translucent!

Everyone always points it out!

PHArchivist said:
Saw the one at Steves previous place. Didn't realize the history on the piece. Too bad its not translucent!
Click to expand...

Yeah, the original translucent one was quite cool… shame it didn't survive, but at least molds were taken so that Schoenburg's amazing sculpt lives on!!


Mxlplx said:
Amazing! And, where can we get the kit?
Click to expand...

Thanks! Drop us an email via our site and we can try to help you on that! http://www.tomspinadesigns.com/contact-us.html

RPF PREMIUM MEMBER
Put up a video about this project for anyone interested… shows a little of the fun we have around here!

Love this statue, thanks for sharing.

As for that butt, I think it's time Slimer did some squats to get rid of that cellulite! :lol