Checked out the pre-order page. Is 46R/L really the biggest size available? Last time I bought a jumpsuit 48R was perfect for me. Is it possible to order larger than 46?

RPF PREMIUM MEMBER
No news at the moment... our facility is in lockdown for another week or so this has really slowed the progress down. We're hoping to be back up to speed in about two weeks.

Filandrius we can make larger sizes by request. Just e-mail us to discuss.

RPF PREMIUM MEMBER
Some WIP on the patches: 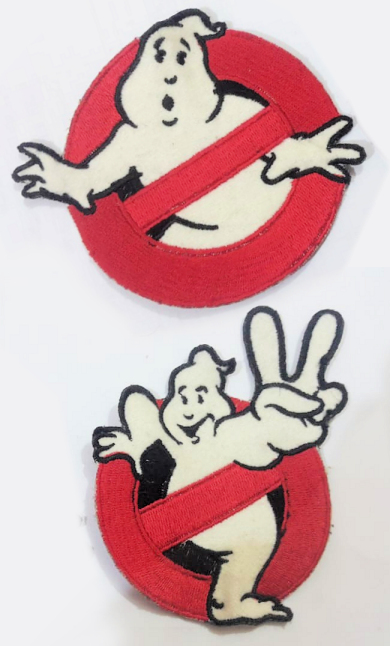 The ghosts are an off-white felt like the originals. These turned out a bit undersized, so the detail is a little less than what they should be on the final versions. We're also planning on removing the edging effect on the red parts of the GB1 patch. Stay tuned...

Is this the final overall design for the GB1 noghost, Indy?
It looks far more like the idealised logo than the actual screen used patches.

I understand if it's been done that way for a more broad appeal as the wonky screen used style isn't everyone's cup of tea. 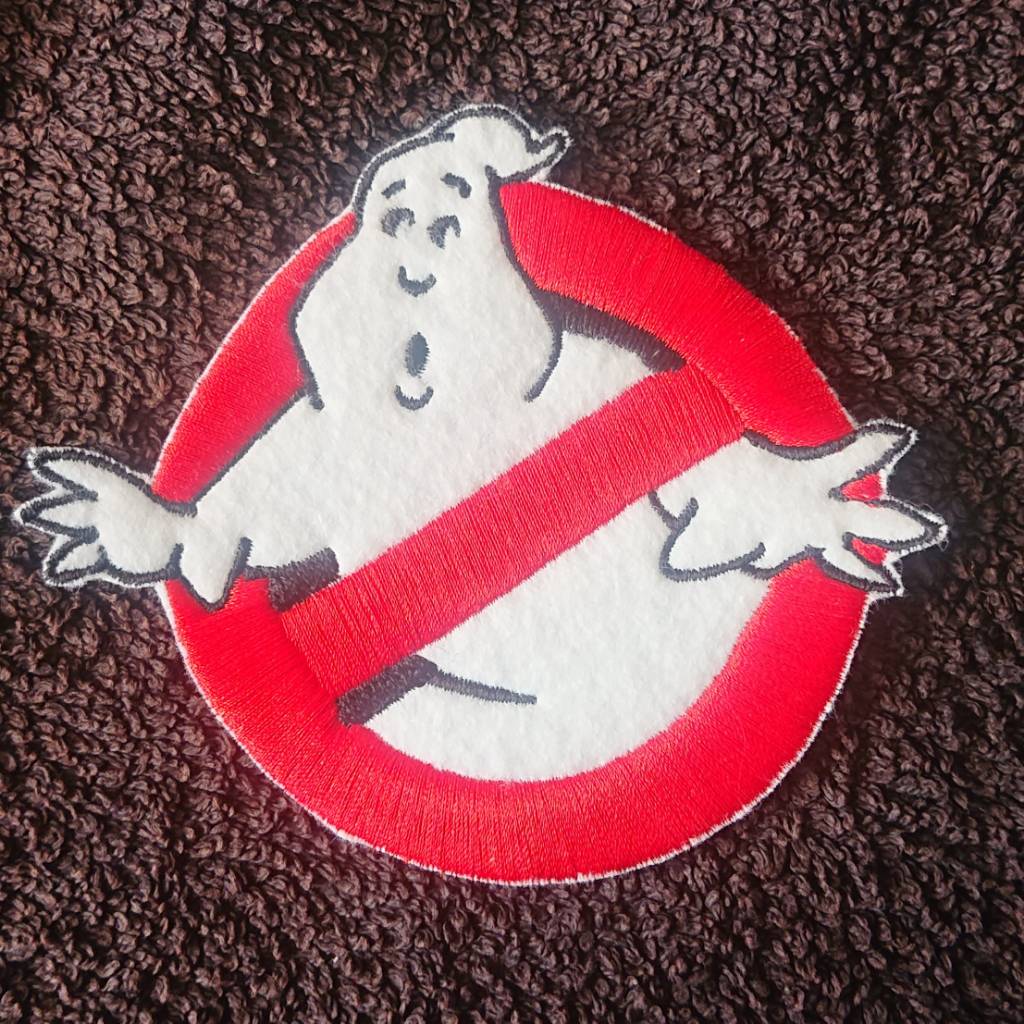 Can't like this enough. The prototypes are way too idealized, IMHO.

RPF PREMIUM MEMBER
I'll see what we can do...
A

I have to agree with what's been said, the patches that have been posted here strike me as no better than anything you can find on ebay, the off white felt material being used is the only exemption.

Here is some illustrations I made on the picture I have saved from the Venkman GB1 suit that Propstore sold off a few years ago.

Some crude illustrated points that I'd like to point out.

1 - The no Ghost Head is higher than is shown on your patch (This may be due to the prototype being undersized, but even in proprortion. The Ghost head should stretch beyond the patch.

2. One of the biggest problems with the idealised version of the logo being used for uniform patches. The two cheeks are not symetrical.

3. Again, the eyebrows are too perfect. To add to the crudeness of the original uniform patches, the eyebrows were not perfectly lined up

4. The stitch marks of the GB patches, as they were hand stitced onto white felt there was lots of visible, the threadcount should be low enough to let some of the white bleed throigh.

Other issues I can see, the red circle is too chunky and needs to be made smaller, it should match the thickness of the bar going across the chest.

Now onto the Ghostbusters 2 patch. 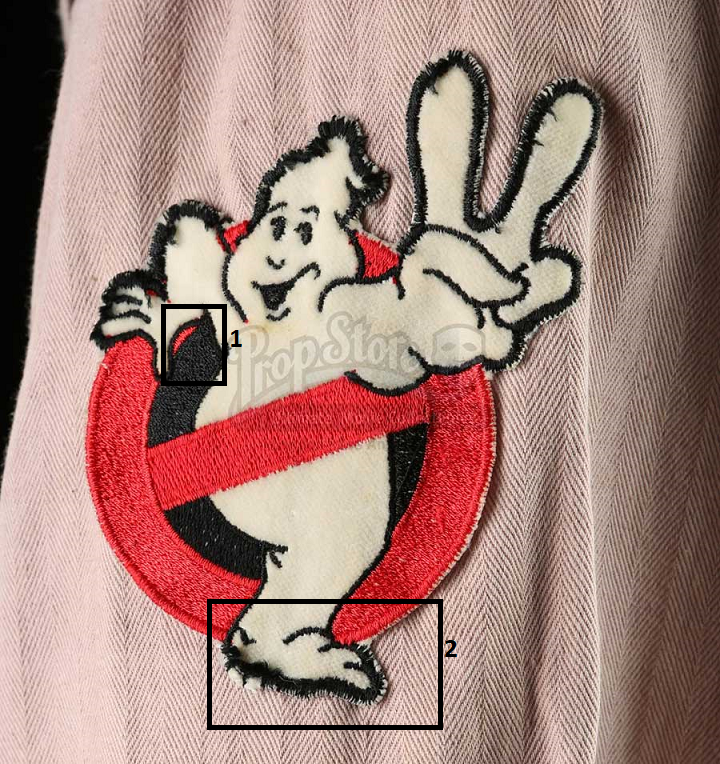 I actually have less to say on this one as it's very very close. Just tiny little details but for the interest of feedback I thought I would post these out.

1 - There should be a tiny bit of red that should be visible under the Ghost arm that is missing from your patch.
2. The foot should hang a bit lower than the red circle (similar to the head of the GB1 patch). In your prototype the leg is part of the circle and only the toes over hang a little bit.

I personally am not overly fussed on how accurate these patches are. There's other sellers on the market who have done fairly good work with the patches, and I personally am inclined to use their patches on my suits. However, others and judging by your previous work, yourself would want these to be perfect so thoght I'd give some analysis and feedback.

It does worry me a little to have paid for the suits already with no visible prototypes etc. As of this date, we haven't even seen an early example of the GB2 Herringbone fabric that will be used, and with the GB1 patch being no better than what's commercially available on eBay let alone what's available within the community it makes me more eager to see what the suits will be like.

RPF PREMIUM MEMBER
abaka9, thanks for those comments. We'll pass these on to our embroider and see if we can tweak these a bit more. We'll keep posting updates, getting feedback and adjusting these suits until we're all happy with the final results.

I’ve already got my order in for a gb1 suit, but was wondering if the jumpsuit were going to have the hand warmer pockets that the originals had. That would be nice.

RPF PREMIUM MEMBER
Yes, these will have the two vertical zippered side pockets.

Cool! These are going to be awesome!
A

It's great to know the feedback has been received and that there will be an opportunity to feedback on any further developments of both the suits and patches. Excited to hear and see more.....I also pre ordered last week, is there a possibility I can get a preview of my name badges. Surname O'Hare
S

Any possibility of doing GB1 style elbow pads in the future? I feel like the shape of the available ones is accurate to GB2 but not GB1. Plus the other obvious differences like the darker color, narrower band, and black patch.

Open communication and constructive feedback is essential to this process. We all want to make the best, most screen-accurate suits ever offered to the community.

I really like seeing this discussion and I look forward to more of it.

Got my order in. Thanks for doing these! I'd also like to voice my preference for wonky, screen-accurate patches. Do you make the suits yourself? Can you perform alterations after the suit has been made in the event of weight loss?

RPF PREMIUM MEMBER
We could do alterations after the fact, but unless they are really major, it'd probably be cheaper to have them done locally, then to send them to us due to the extra cost of international shipping back and forth.

Good point. I do live 10 minutes from Gibson and Barnes....