I'm not actually a huge fan of the second Ghostbusters film, but I have always quite liked the "Semi Hero" packs made for it - from a technical/film-making standpoint anyway.

At least one of the original cast (rumoured to be Murray) found the weight of the GB1 hero packs too much - so somewhat lighter ones were made for the second film. A whole hero pack was moulded - with lots of clay to fill the undercuts - so that all the tubes, some of the metal fittings and large metal pieces like the Ion Arm were now made into a one-piece fibreglass mould with expanding resin foam to fill in some of the details. The gun/thrower/wand/whateveryoucallit which was mostly welded/machined aluminium on the hero guns was again moulded as a single fibreglass casting (with some quite ugly seams/clay fills). One of the major weight savings however must have been to simplify the electronics - the original hero pack had a motherboard completely filled with circuits, transformers, and apparently very heavy batteries. The first film packs used all incandescent lights with (for the time) complex sequencing options. The semi-hero packs for the second film use one simple off the shelf "effects" board in the pack and the gun, with nothing but a few bulbs in the gun that don't do much, and these are powered by two Makita drill batteries (which for some reason are visible on the pack - perhaps they predicted having to do a lot of hot-swaps on set).

It's fair to say that these packs weren't as well made as the originals, and in several shots in the GB2 you can see how badly they're falling apart - when Ray and Winston leave the party at the start of the film, either one or both of the trigger boxes are smashed open, and Venkman's gun when they're incapacitated by Vigo has the hose barb ripped right out. In fact the original GB1 hero packs are often pressed into service - in the various cuts in the courtroom scene where they turn the packs on, Egon and Venkman are both using Bill's hero pack from GB1 - and as the scene progresses the packs flit between GB1 heros and GB2 semi-heros.

The best known semi hero is the one on display at Sony (featuring a completely destroyed gun) which was Ray's: 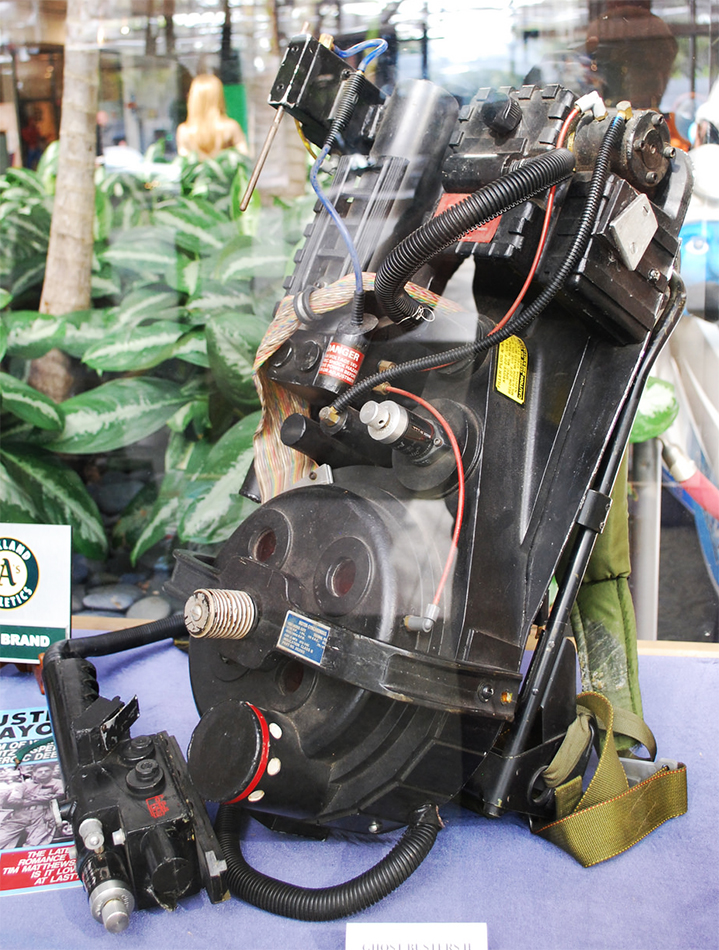 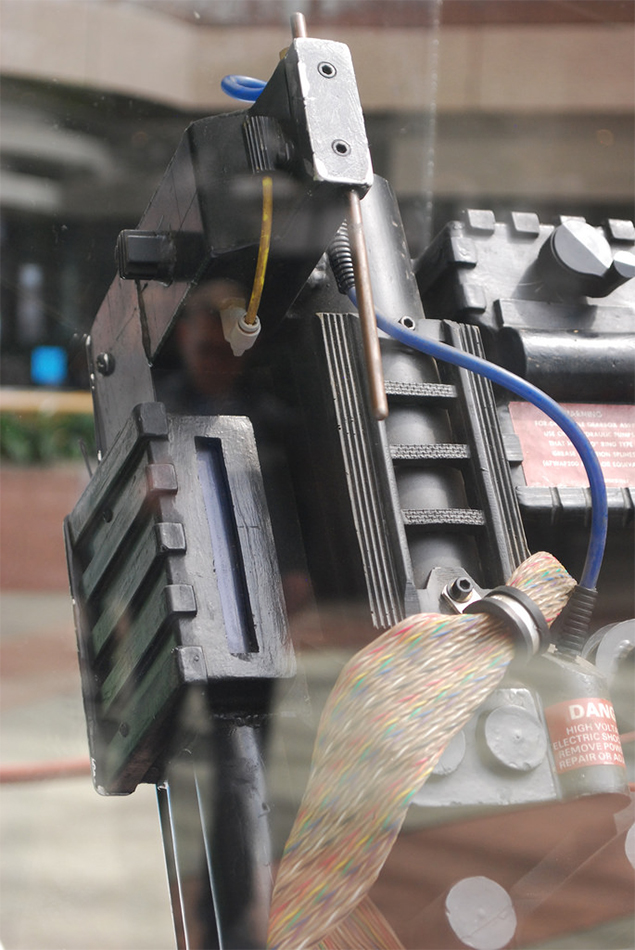 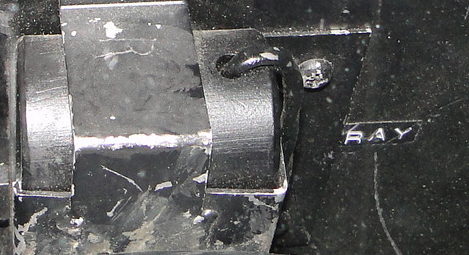 Since there's lots of reference on the semi-heros out there, and a member of the community briefly owned one, I fancied building one up myself. My day job is in the art department of TV shows/films and we often have to accomdate actors needs, so the idea of making one of these 'light' packs was interesting to me. Nick-a-tron on these boards did a run of GB2 style shells - with the major parts moulded in, and he also did a limited run of replica, one-piece throwers, so I couldn't turn down the chance to assemble one.

A couple of years ago Nick let me in to his workshop and we moulded up one of his semi-hero shells for a quick and dirty Halloween costume - I actually dressed this as a GB1 hero but I knew I needed to correct it: 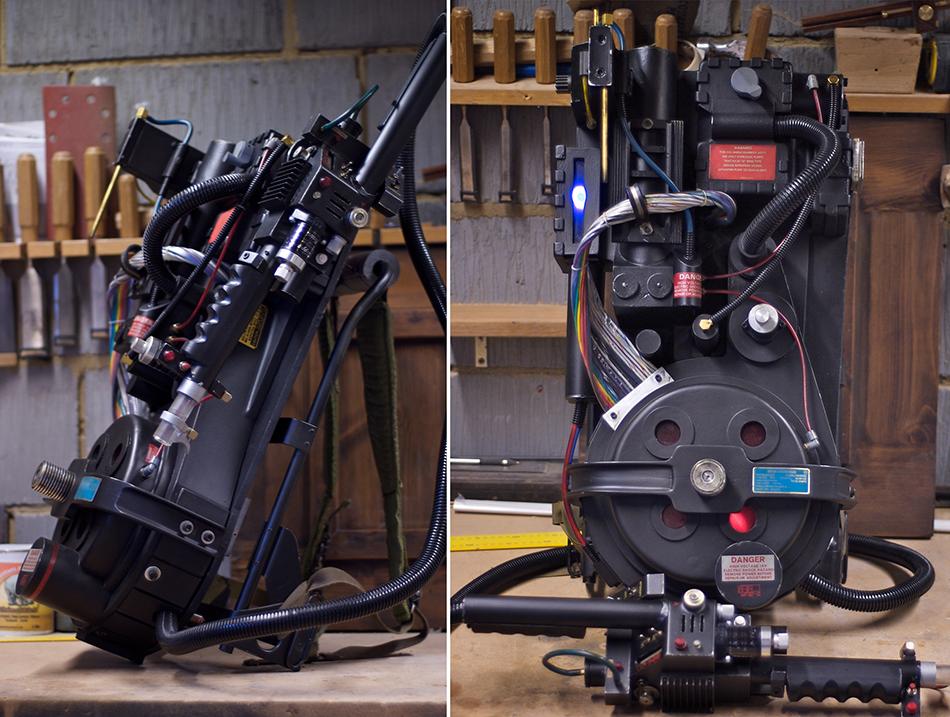 The first thing I wanted to start with were the thick straps. At some point in GB2, they switched from thin-strapped semi-hero packs to thicker, custom padded ones. I'm not really sure why this change happened (perhaps to further lighten the packs). As for when - the thicker straps appear in the publicity photos for the film (often taken towards the end). I did wonder if it happened between the NY location shoots and the LA studio stuff, but looking at photos you can see the thin straps in the NY scenes too. My pet theory is that this was done towards the end of the shoot - perhaps for reshoots. In the scene after they fail to break the slime shell outside the museum, you can see everyone with thin-strapped, semi hero packs: 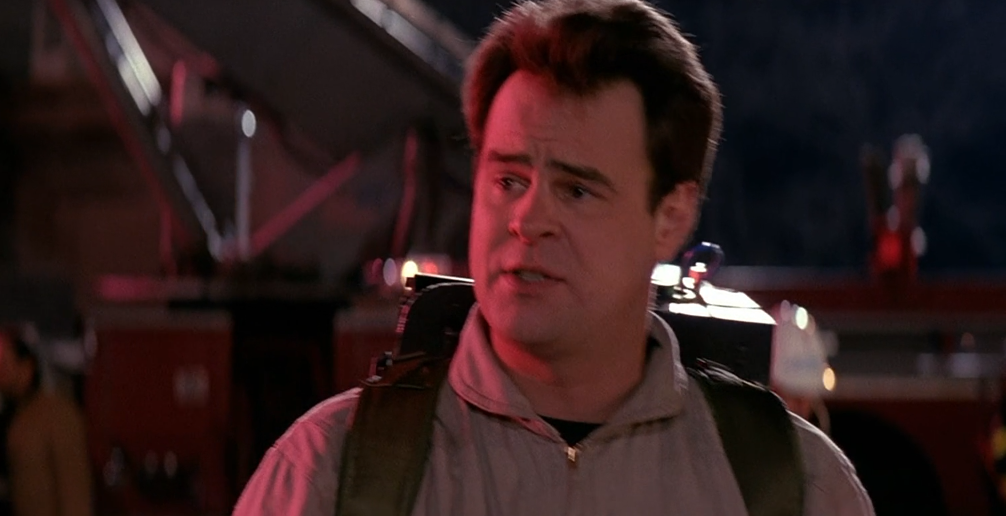 But then when they do a cutway to Egon talking, which is clearly an insert/pickup shot (just watch the film and see how jarring the change in background is...)

...he's on thick straps (this is actually his GB1 refitted with thick straps, to add to the confusion). Luckily, the making of thick straps was easy as my girlfriend is very good at sewing. We used upholstery foam and tried to match the fabric the best we could. The method employed in the film is pretty crude (no surprise there) and the straps distort quite a lot with the softer foam, but it is slightly more comfortable to wear. She actually did a run of these for Nick. 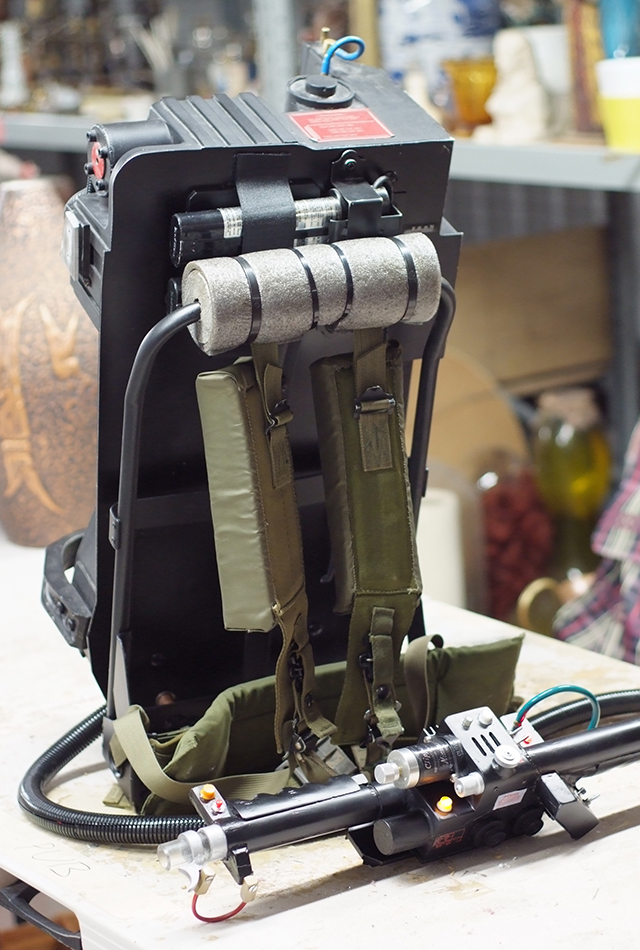 After that, it was adding the metal battery bracket and the Makita drill batteries, along with the velcro to hold them. The pack is actually powered by a pair of PP9s attached to the inside of the motherboard, rather than the batteries themselves. The top one is a real one; the one below that you never see is a resin cast. I also added a dymo "Egon" tag to match the visible "Ray" one. I also peeled the labels a little to give them an aged effect (I also changed the mounting bolts to mushroom Phillips head rather than hex bolts) 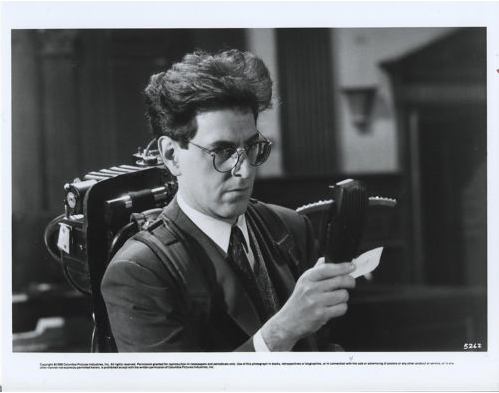 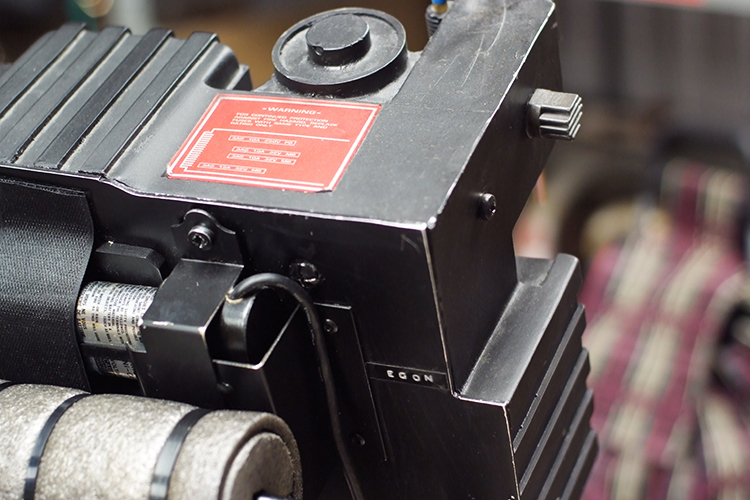 On the front - a few, less major changes. I changed the ribbon cable from my GB1 replica (oh, if only someone would find the original) to accurate GB2. I matched the folds and shape as much as I could to the Washington semi-hero pack, but didn't thread it under the blue cable as that seems to be a bit of a mistake. The Clippard hose on this pack is the correct, mega-rare rubber stuff which I had in storage for years. It flexes and sits much better than the nylon stuff people use today, and it ages up better too. The nylon is so stiff that I think it would rip the barbs out of the green gun hose. 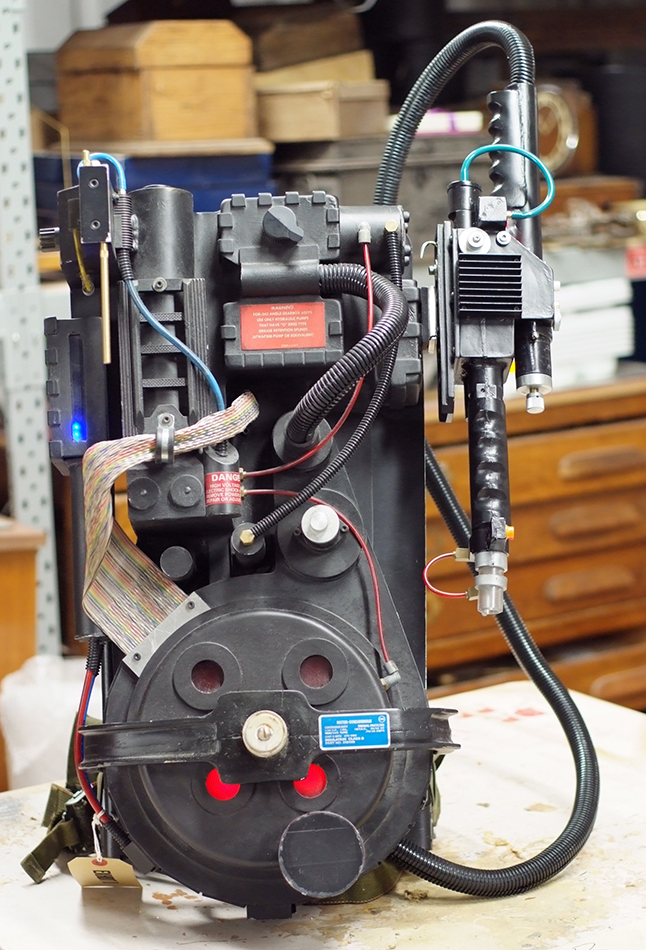 I gave the pack a minor weathering too - I think one thing people often do that's wrong is that they put loads of silver edging on the pack to make it look like it's metal - the real packs on screen never really had that - if you saw any bright colours that was usually the raw gelcoat (which was white on the heros, and I think black on the semi-heroes), and grey primer. In fact most of the "weathering" on packs seemed to be a layer of dust/dirt sitting in the texture of the material, so I gave it a few light dustings of fuller's earth, along with several washes of grey and brown Dirty Down sprays (we use those all the time on TV, they're bloody amazing). There's a few natural chips in the paint showing grey primer which I left as-is.

One of the main changes was swapping the bumper for a casting of a real, screen-used semi-hero one (which itself was cast from a hero one) This came from a member of the community who bought pack #4 at auction a few years ago. It has all the details - the split and the mis-alignment through the centre, and that distinctive scratch from the top-right of the front plate. It's a lot less perfect than the one the one that went before it, but it really gives the pack that screen-used feel. (original top, replica bottom) 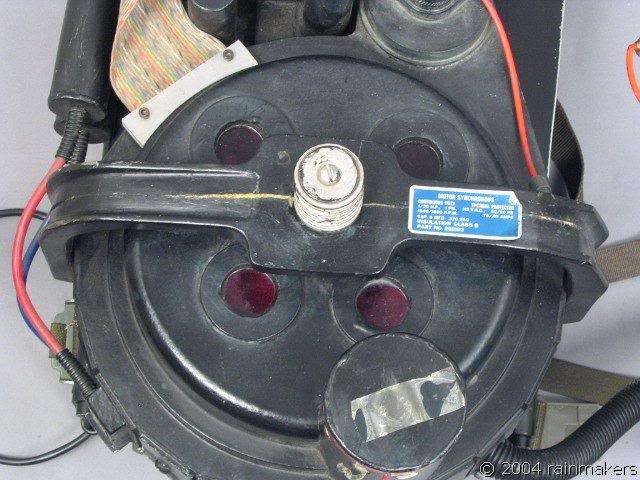 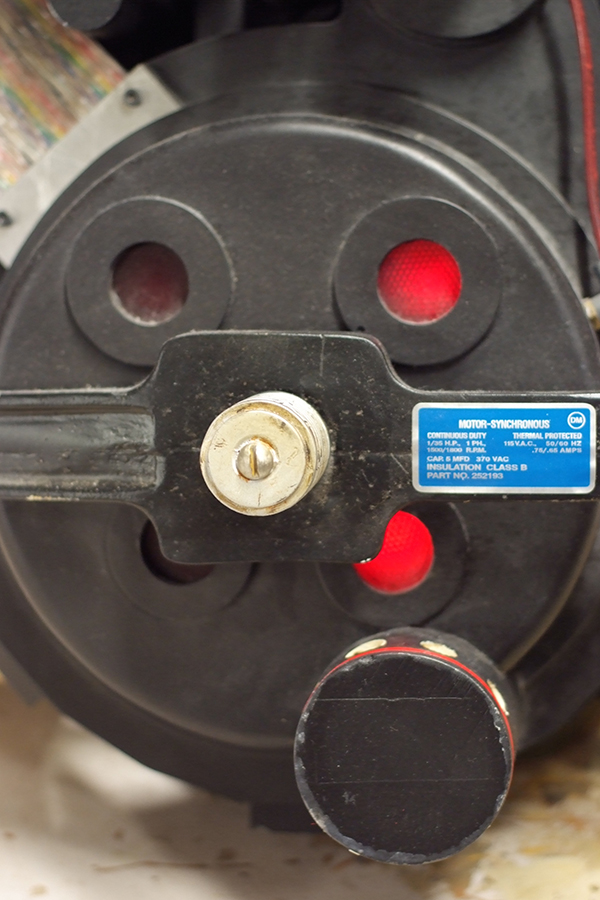 One concession I made was to use red trans resin cyclotron lenses that have a reflector texture. These were made by forum member Volguus over a decade ago (!) based on what reference was available. Eventually it turned out that the 'texture' was actually just a breadboard panel visible behind the perspex, but I've kept using these as they diffuse the LEDs beautifully so the effect is much more like how you perceive it on camera. This to me is better than simply having an LED visible behind the perspex.

I also tried to get a few of the smaller details right, like the impression of the transfer that was picked up in the mould (original top, replica bottom) 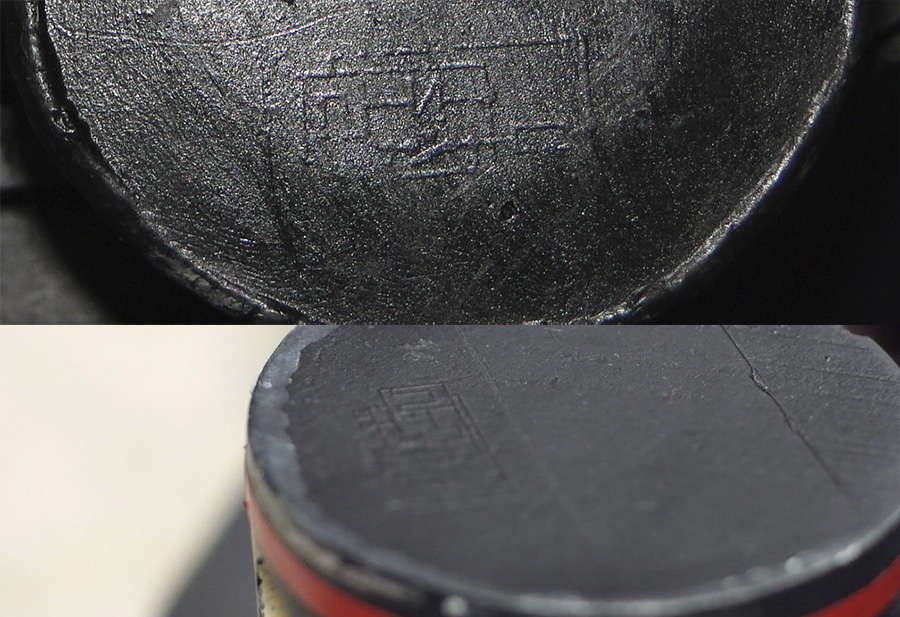 For the gun, there wasn't much to make as Nick made an excellent casting and really captured all the horrible warped bit, seamlines and messy clay infills.

This photo of the Murray hero gun shows how complex the shape was (and how nicely made those aluminium throwers were compared to the rest of the pack): 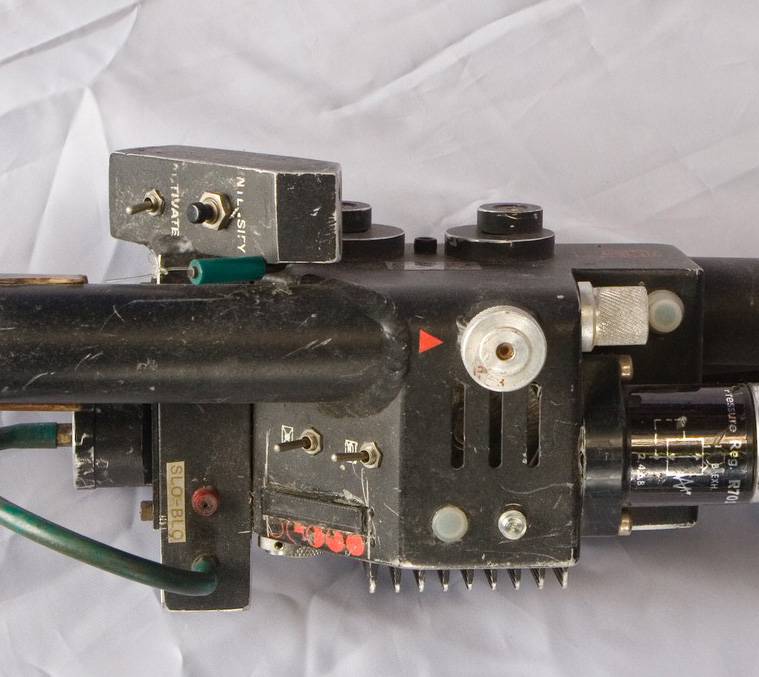 These shots of the Washington semi-hero show how it was all filled in with clay, the HUGE seams down the side, and they really show off the simplified graphics and fairly poor resin castings of the knobs. 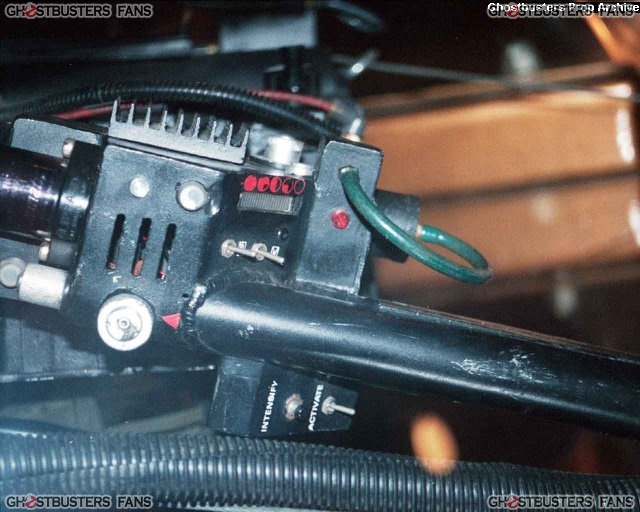 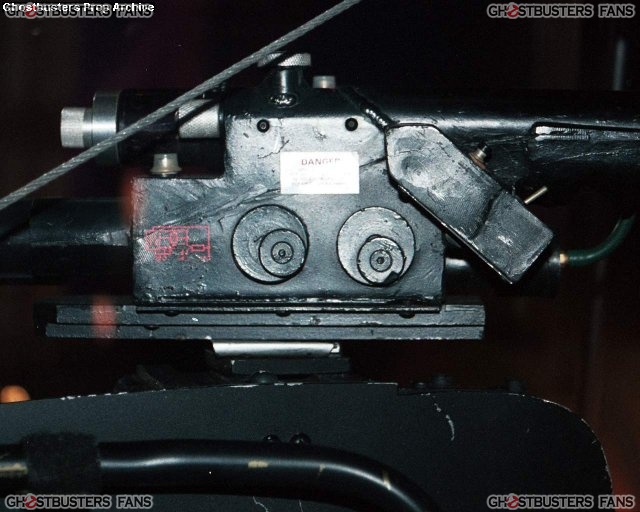 Compared to the original hero guns, which had scrolling incandescent bar graphs, strobe lights, flashing and blinking sequences, the semi-hero gun had just 5 lights - 2 static lights front and rear of the body, a single flashing yellow light, and in place of the hero's bargraph, 2 bulbs backlighting a transparency in a Rototellite light/switch (another surplus part). Lines were drawn on the transparency to simulate the bargraph. This switch was easy to find on ebay and I had a simple circuit wired up that matched the limited functions of the screen used originals. 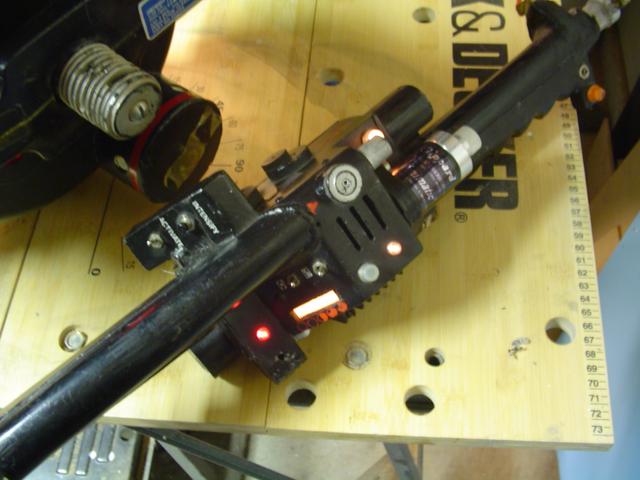 You can see a mushroom hex screw holding the Rototellite in place: 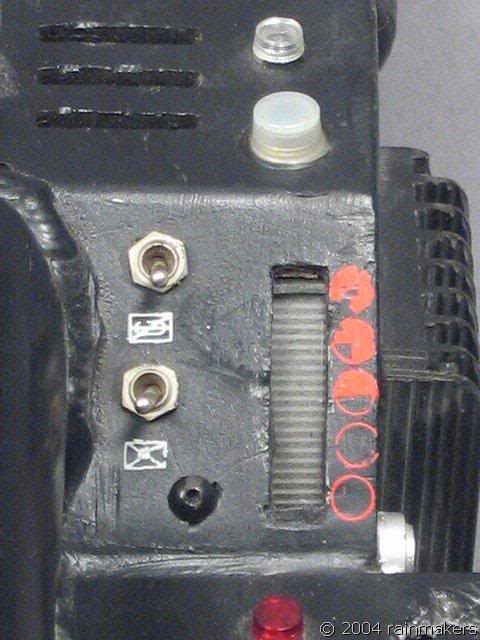 I had some waterslide decals printed up to replace the dry rub or silkscreened ones on the originals. I made my own versions of the INTENSIFY/ACTIVATE labels as I think the ones out there didn't have quite the right letter spacing and were slightly too small. I left the heatsink on the gun squared off - some were rounded but I prefer the square look: 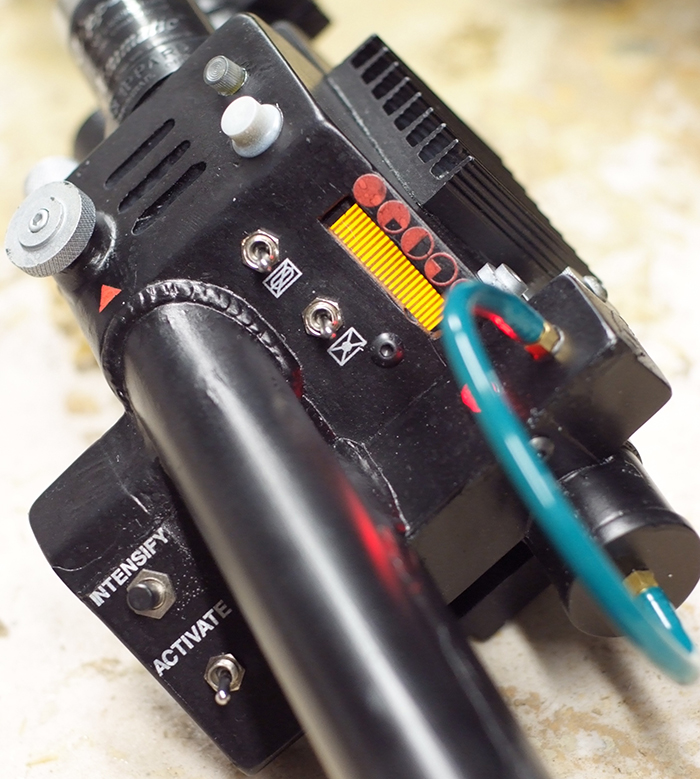 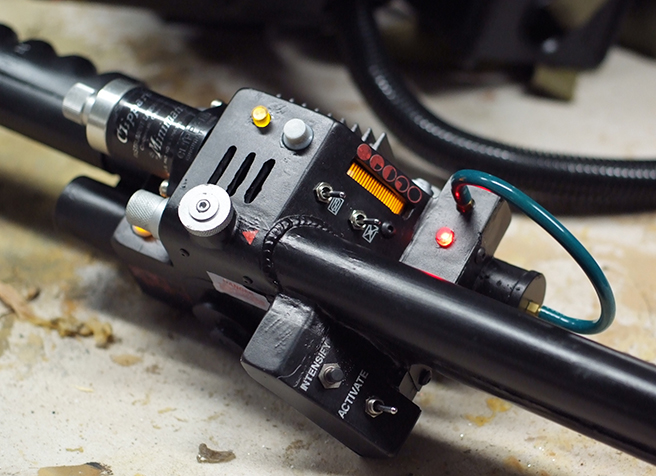 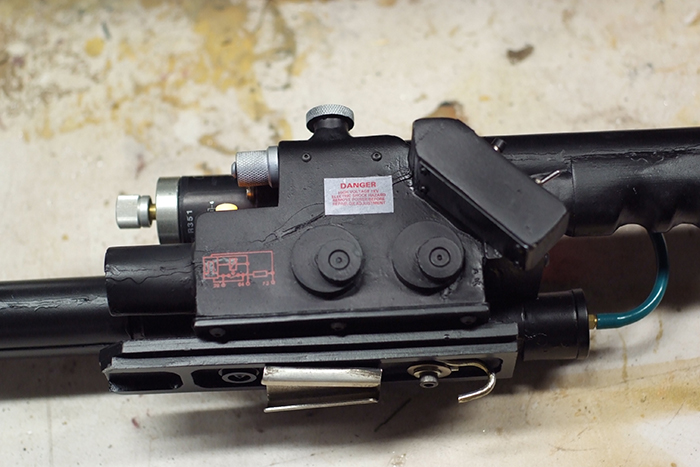 On display in the Sony lobby along with Ray's pack is one of the magazine covers mocked up for the first film - done using paper and letraset I assume. I replicated this using one of the promo photos to put on display next to it: 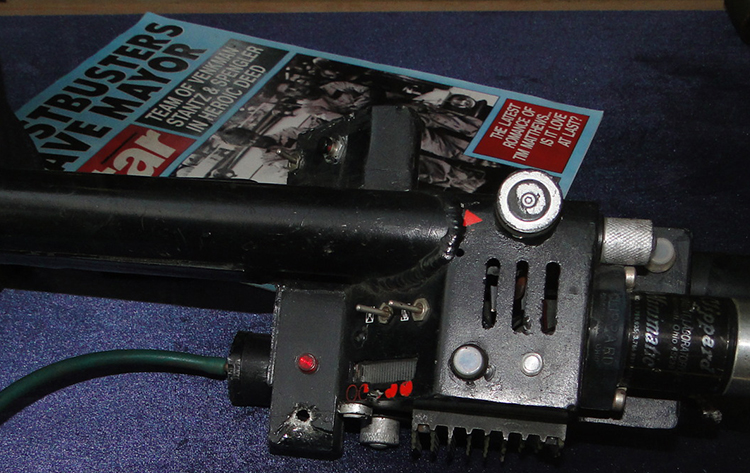 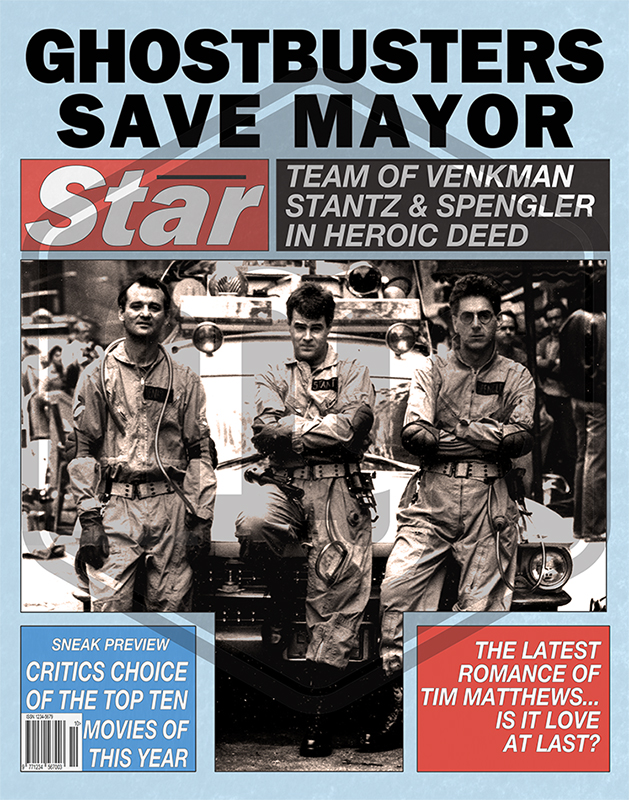 Finally, I made up an evidence treasury tag from the courtroom scene (the courtroom packs don't have the thick straps, but let's not worry about that). In the film, the exhibits are referred to as A-F, with the slime jar being F. The packs are on the other end of the table, and Egon appears to pick up the second one, so I made my tag "Exhibit B". Here's one of the tags on the rubber stunt pack. In a closer shot of the slime jar the type appears to be Helvetica bold compressed. I cheated a little and did the letters on my vinyl cutter rather than have them printed. 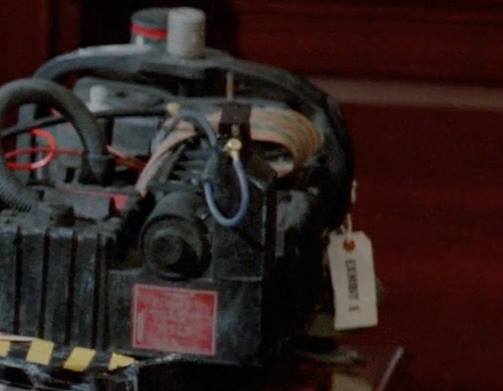 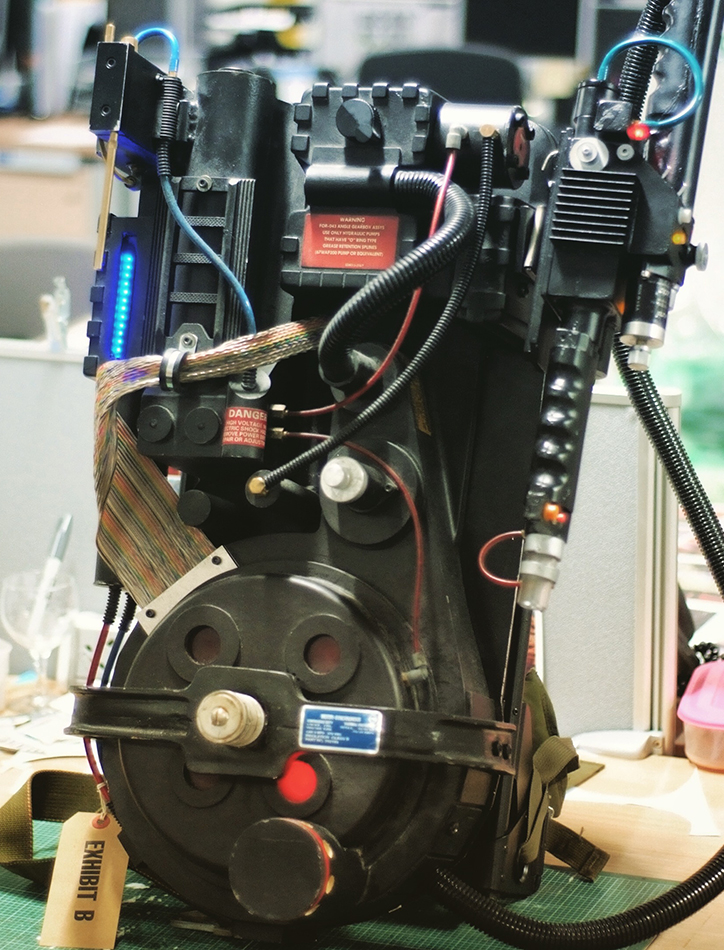 Lastly - here's some more overall views of the finished pack: 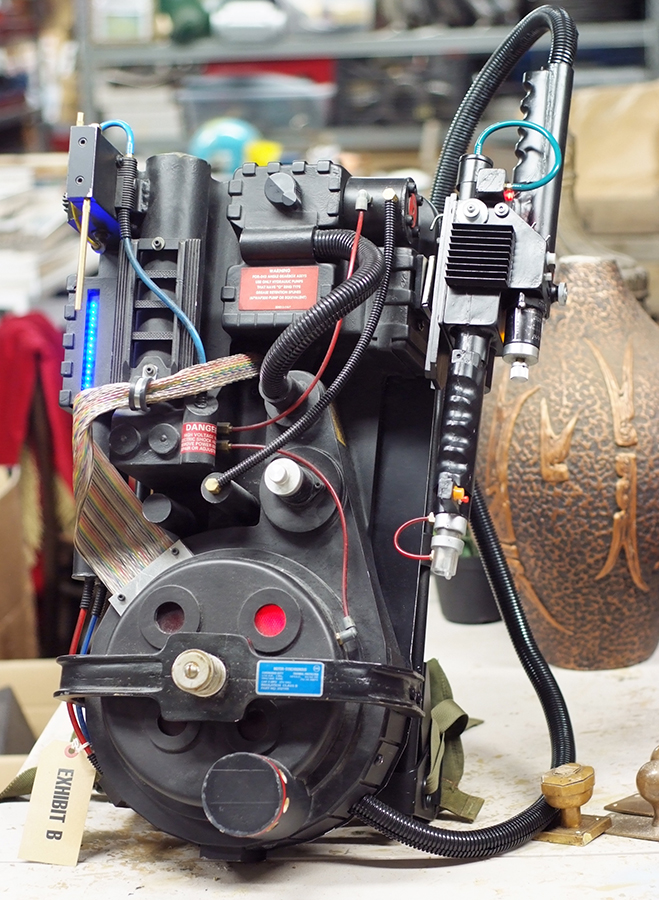 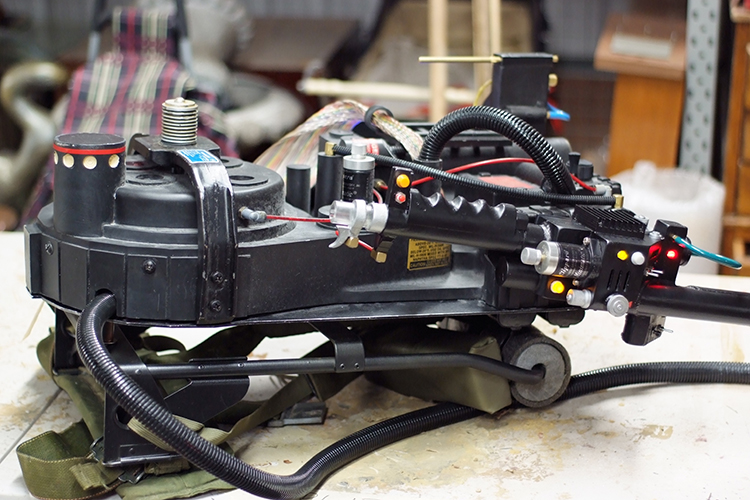 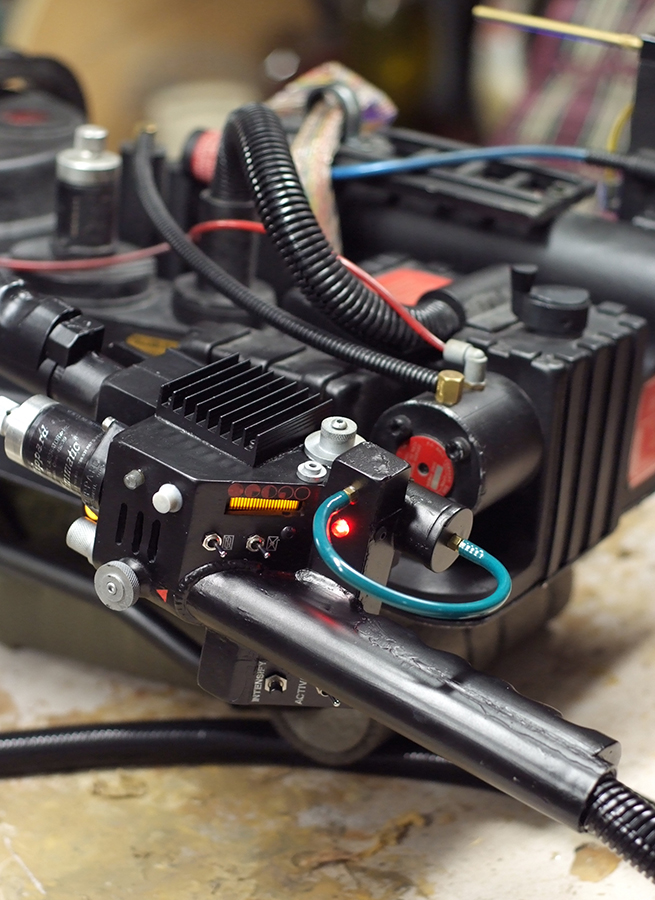 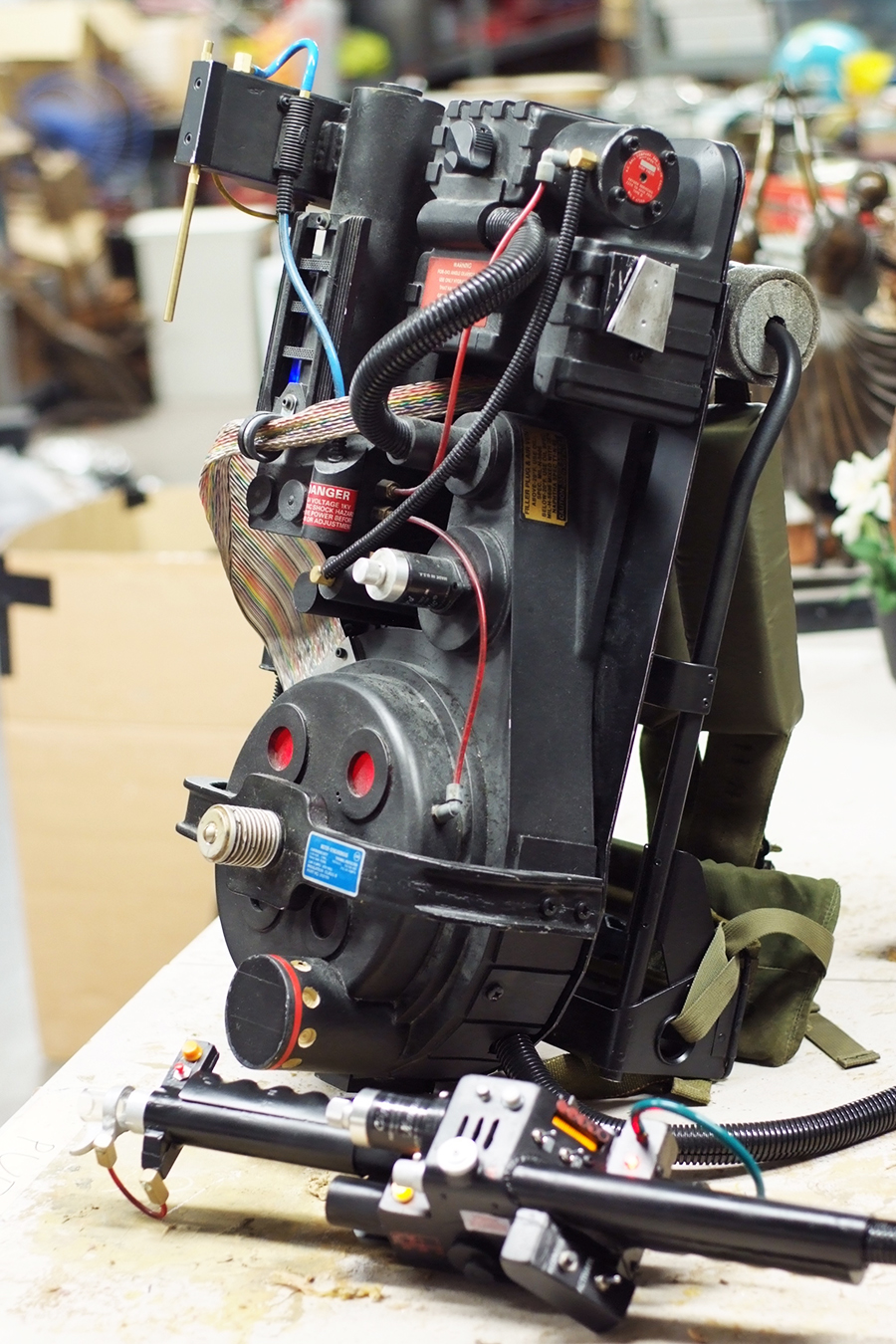 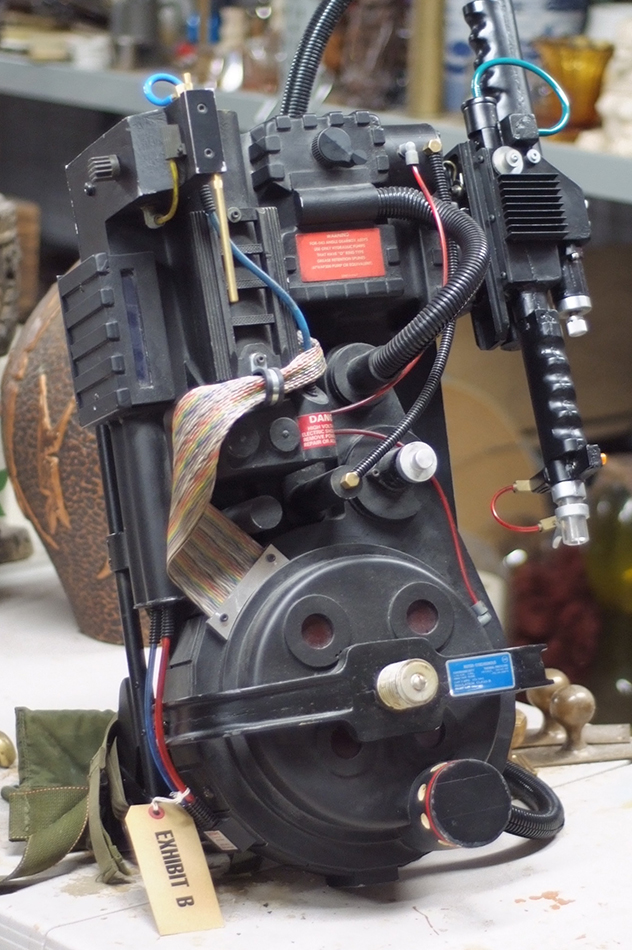 Thanks! After this it's a GB1 hero and then I (hope) I'm done with making them.

Why did you choose to go with the GB1 v-hook and not the countersunk screws like are seen on the semi-hero lobby pack?
(Not meant to be accusatory, I'm just curious going to be starting my own semi-hero build soon)

Its a great pack Matt! Can't wait to see you start your "final" Hero build.

Monday at 2:29 AM
sandbagger