Intro:
This thread is supposed to document my attempt to recreate a passable replica of one of the stop motion puppets of the terror dogs used in the OG Ghostbusters. This was a very fun and educative project. It involved a lot of blood sweat and tears but I am very pleased with the end result. 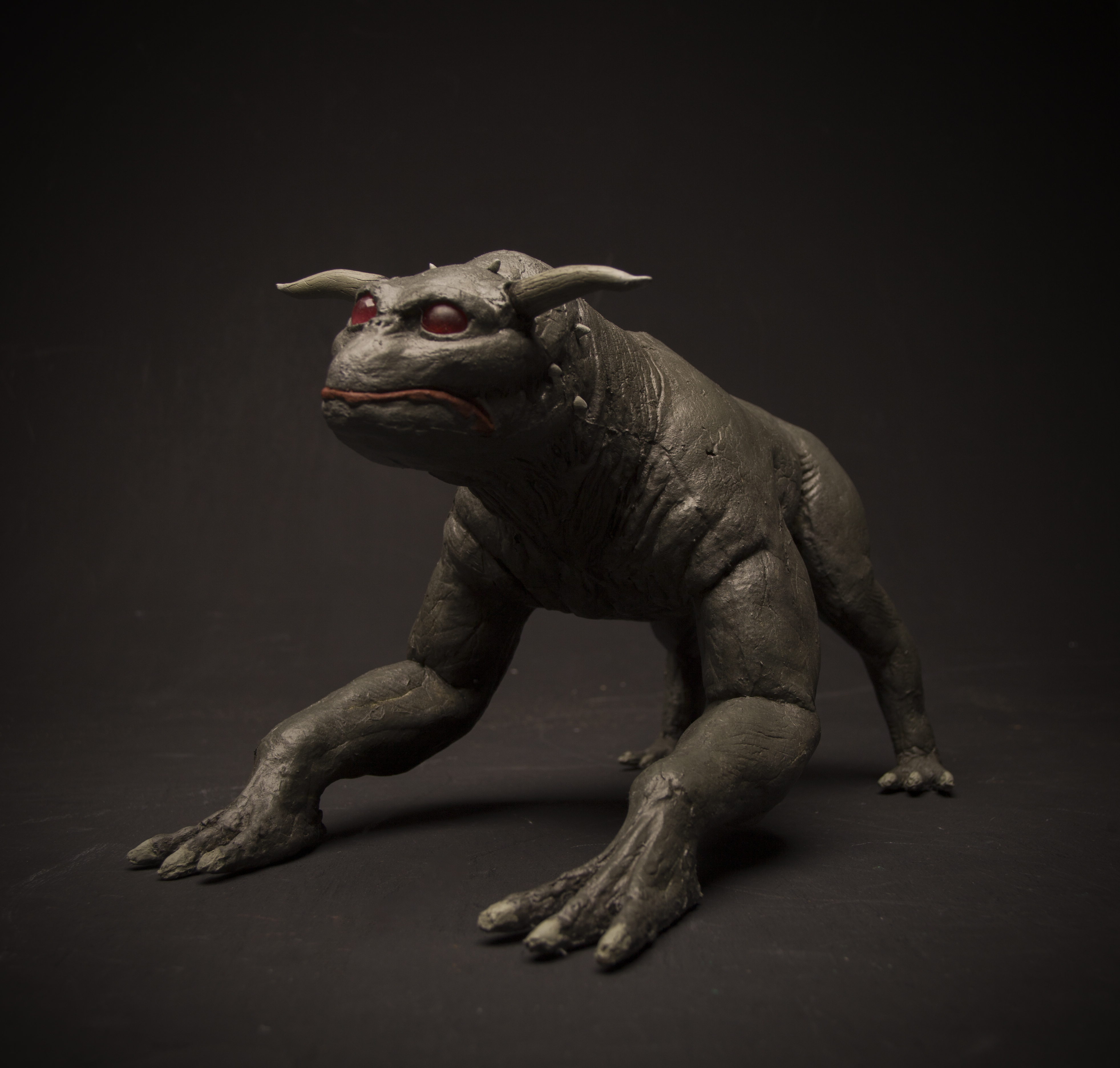 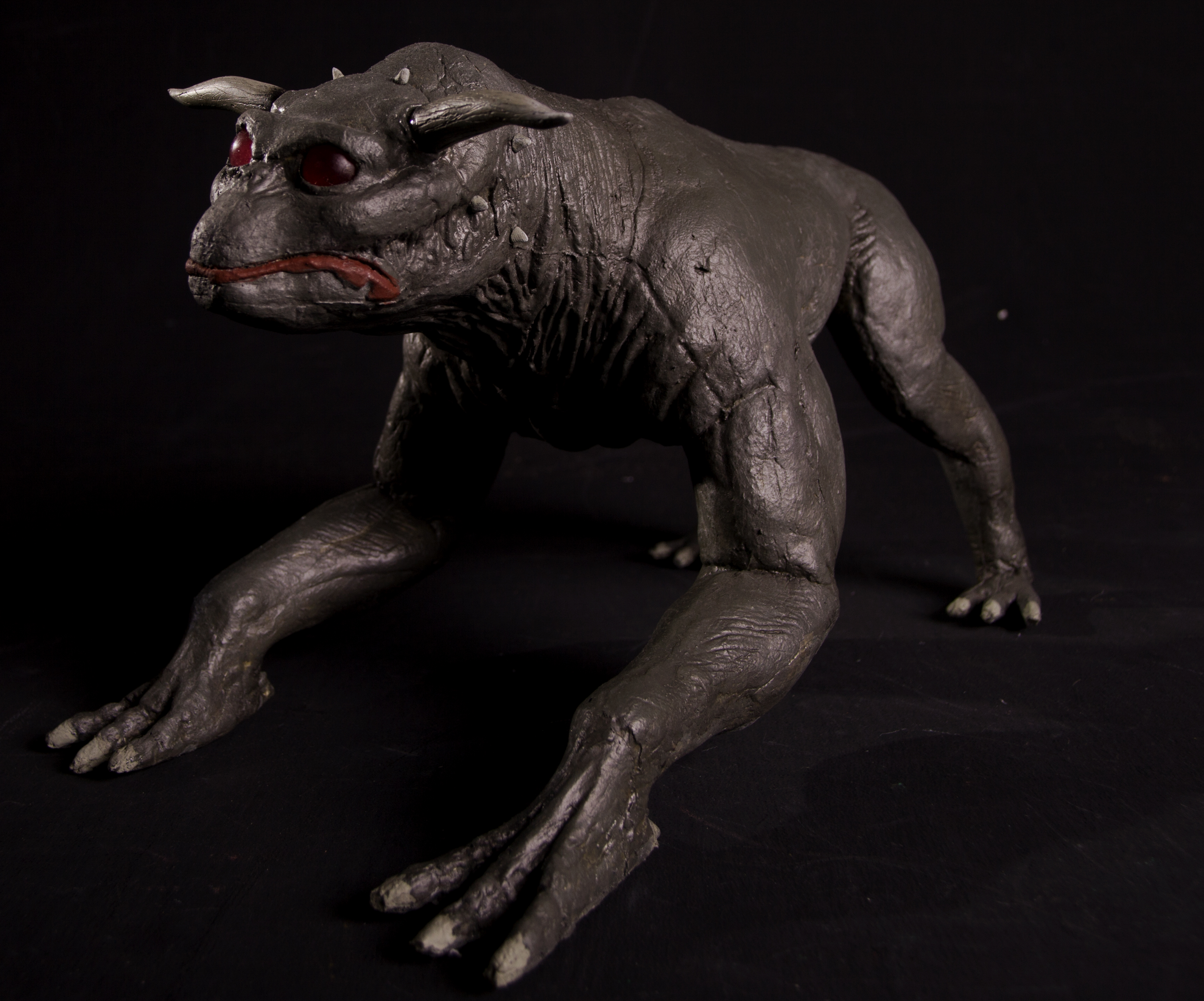 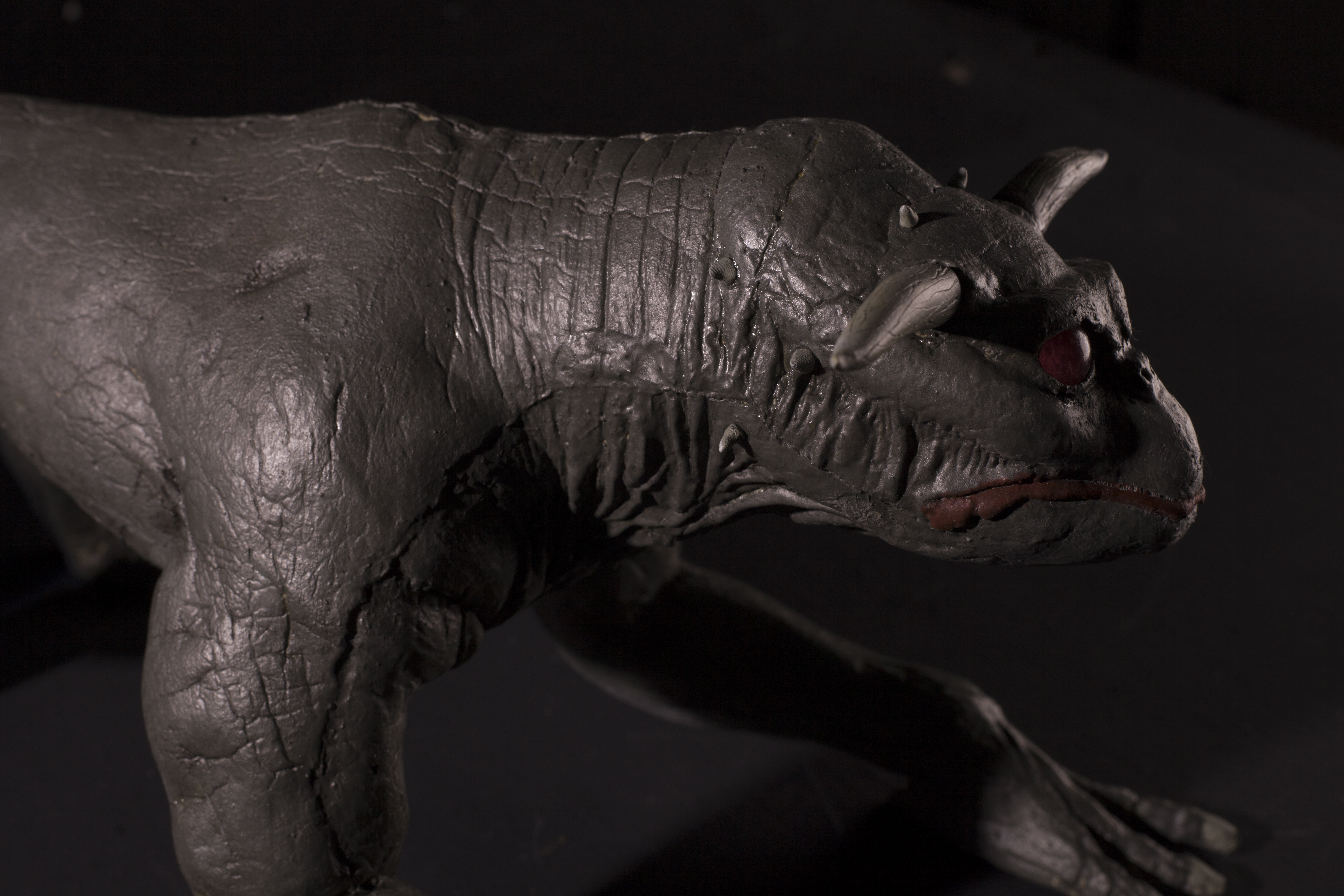 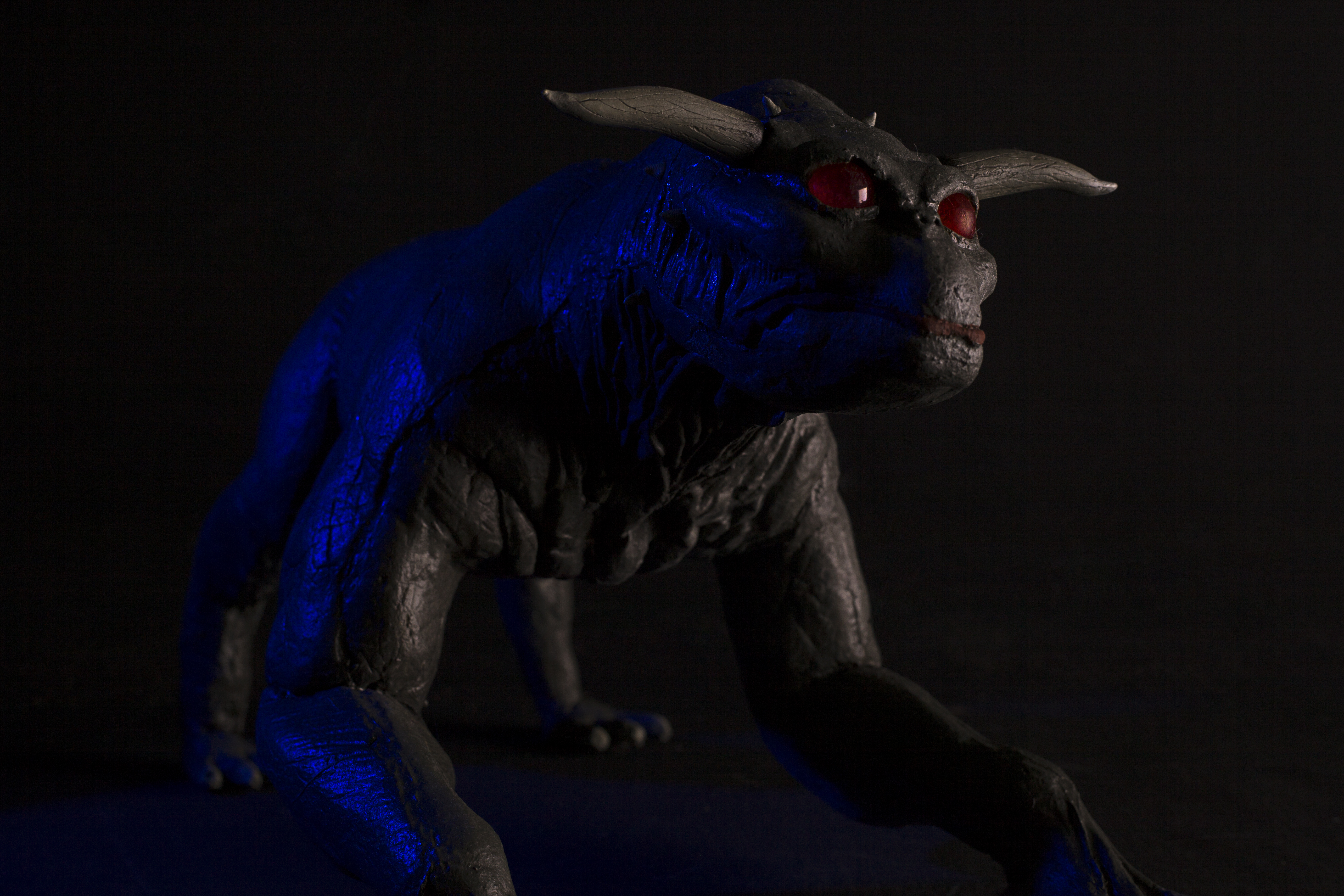 First of all let me say that i do NOT consider myself a sculptor. I much prefer hard edge modelmaking and prop making. This project was very much out of my comfort zone, but that was kind of the point. This was my first ever attempt at "serious" sculpting and latex work. The objective was not to make a "perfect" screen accurate replica, but to familiarize myself with the processes of sculpting, and working with foam latex. This also means any constructive feedback on my sculpting would be highly appreciated.
The main objective with this project was to create a close replica of one of the original 1/4th scale stop motion puppets created for the production by Randall William Cook. I was supposed to be made using the same techniques thaat were used for the production and have a posable armature.

That's looking really nice. It has a cuter look than the movie versions, but I really love the texture on the body and face. I can see you went with the downturned horned version - can't remember whether that was the male or female one.

Too Much Garlic said:
That's looking really nice. It has a cuter look than the movie versions, but I really love the texture on the body and face. I can see you went with the downturned horned version - can't remember whether that was the male or female one.
Click to expand...

As far as I remember it is the male version. It is the one that follows Louis Tully into the park. This is also the non-snarling version.

Now we are getting into the fun part. This is all I could dig up on the stop motion puppets that I found helpful and interesting. I do not claim to be 100% correct on everything, but I did my best to interpret the information I found as correctly as possible. Please correct me if I am wrong.

History:
According to the book "Making Ghostbusters" (1985) by Don Shay, the man responsible for the final design of the demondog was Randall William Cook. However before Cook started his work, the terror dog went through a lot of different designs, with the last pre-liminary sketch and sculpt being done by Thom Enriquez. 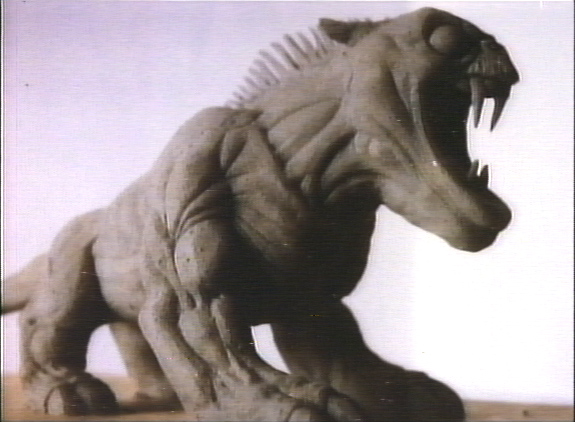 This sketch and sculpt was greenlit by Ivan reitman, and the assets were given to Cook, who made some tweaks and changes to make the demon dog seem more realistic, and less "cartoony". 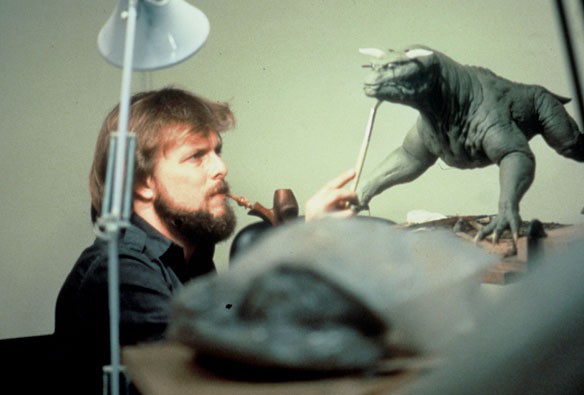 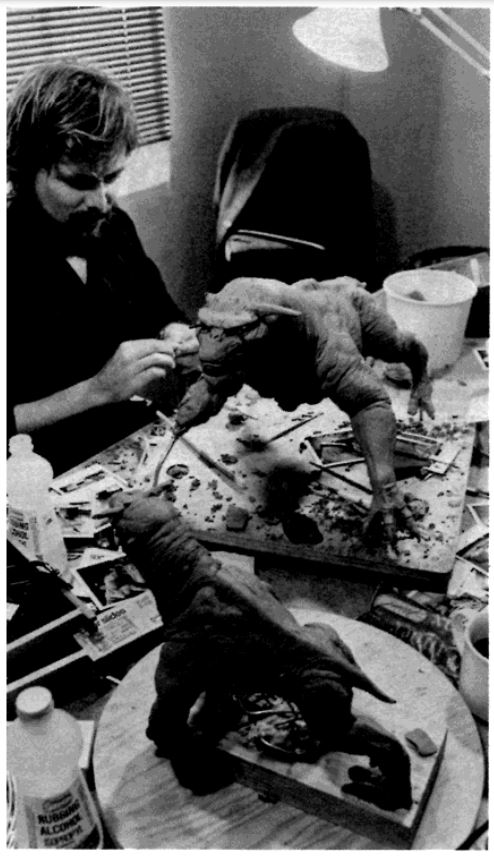 Cook was also responsible for sculpting the 1/4th scale puppet, whilst the rest of the team worked on the full scale sculpts for the live action shoots.

Different Puppets:
A few different versions of the puppet were created for the production, with different features.
First there was the difference between the male and female version of dog, which was mostly the shape of the horns. This can be seen very clearly in the rooftop scene where Dana and Louis get transformed into the dogs. This is also backed up later on by lore in the concept sketches for Ghostbusters Afterlife. 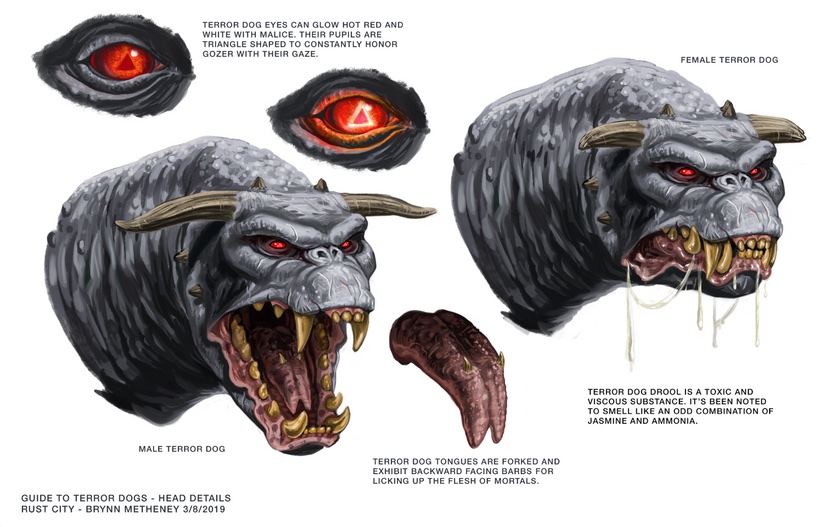 From what I could find I concluded that, both from the male and female two versions were created. There were versions with open mouths, which were used for snarling and growling animations and closed mouth versions that were used for more static shots. 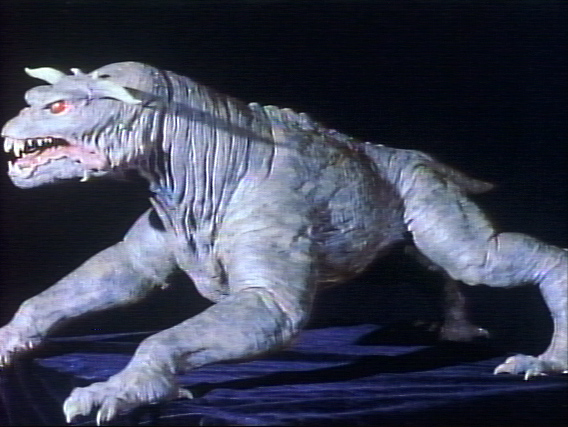 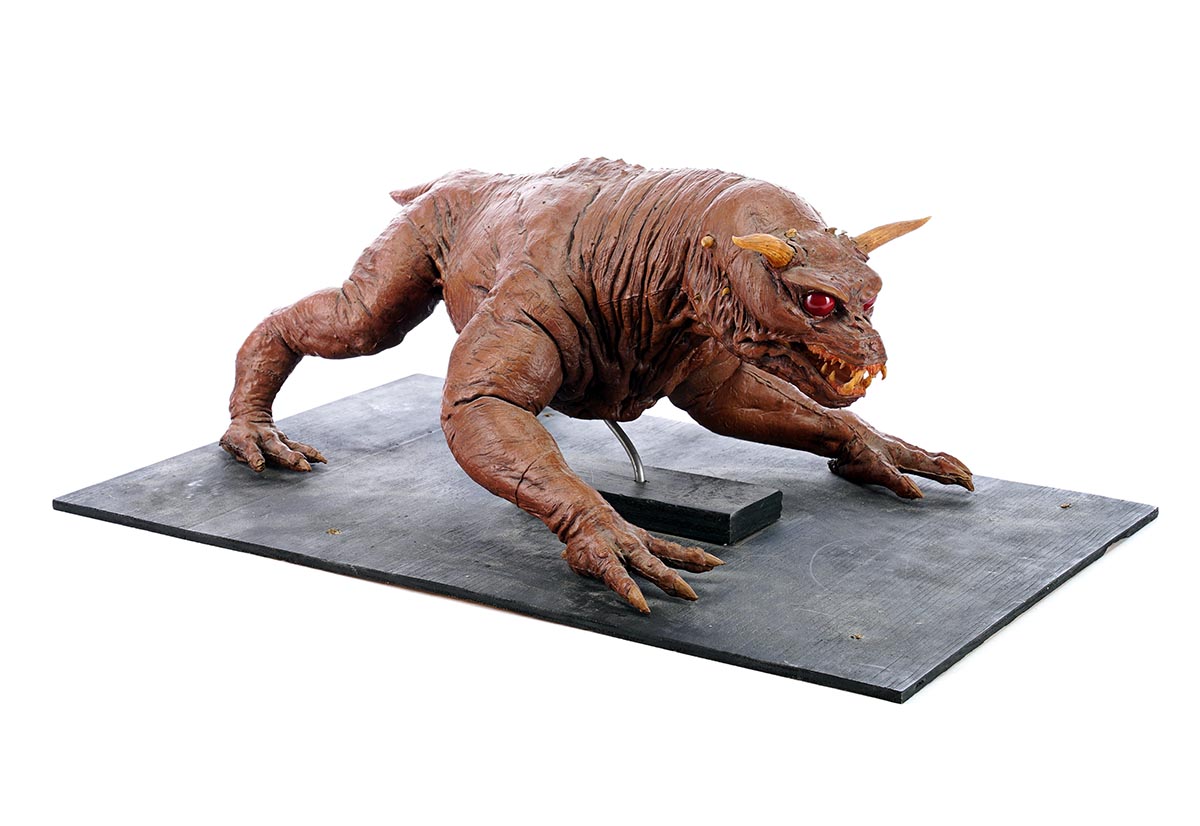 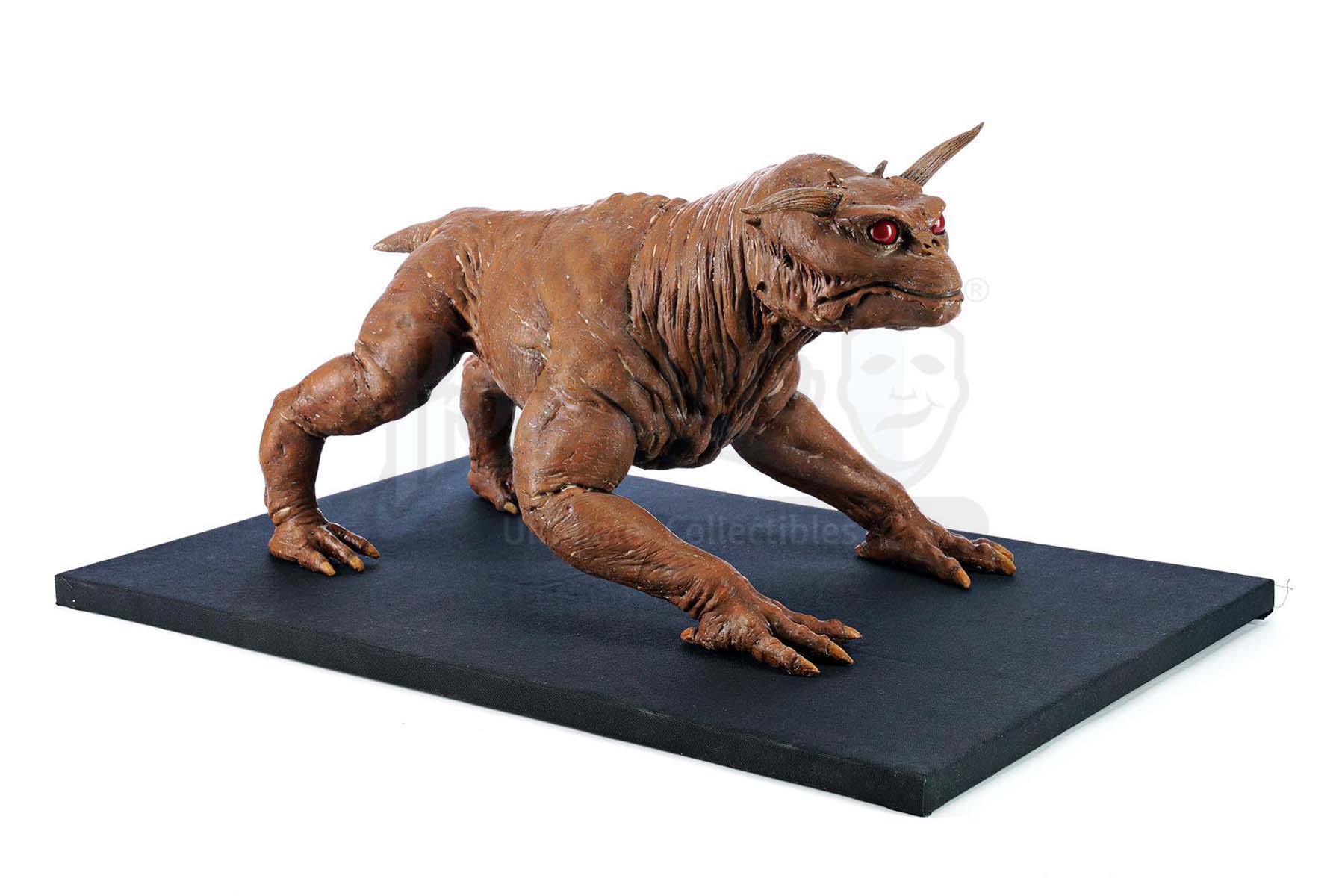 The open mouth versions were considered the "hero" versions as they all were fittet with classic stop motion armatures. For both the static versions and some backups of the snarling versions a simple wire armature was created, which was cheap and easy to recreate. 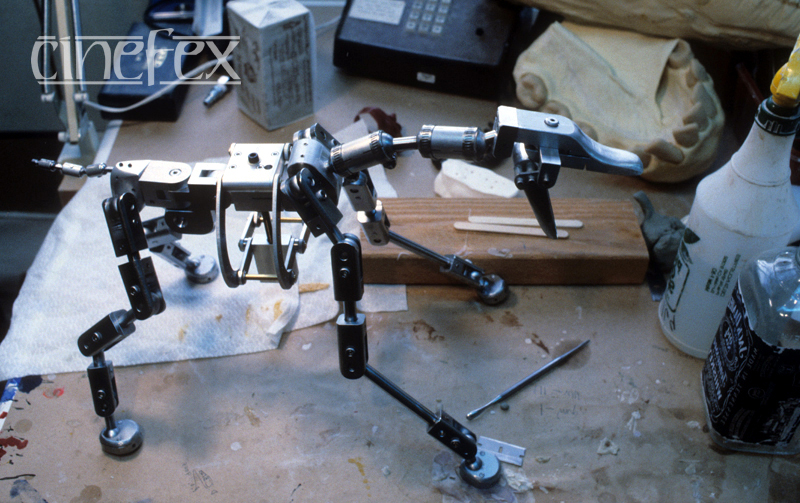 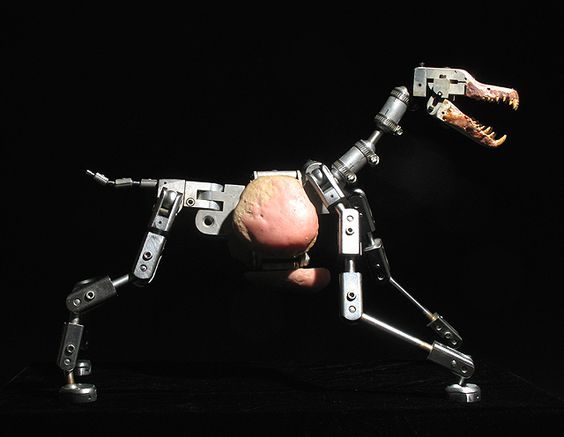 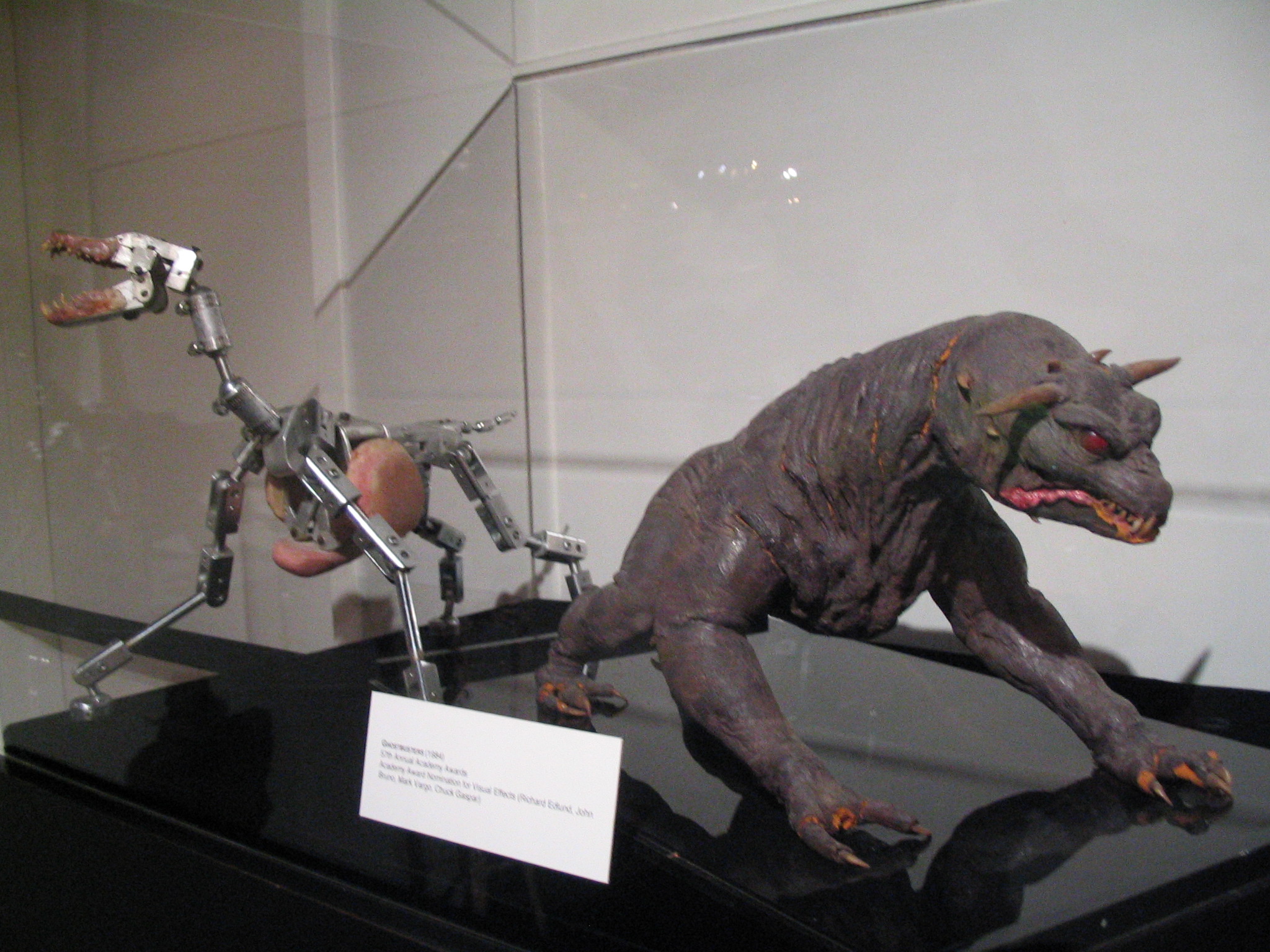 For the moulding and casting process a 8 part plaster mould created. The armature was then suspended in the mould using small wires and the foam latex was poured and baked. Through images found in the book and a smooth-on article a found the division lines and that the pouring spouts for the latex were on the feet. 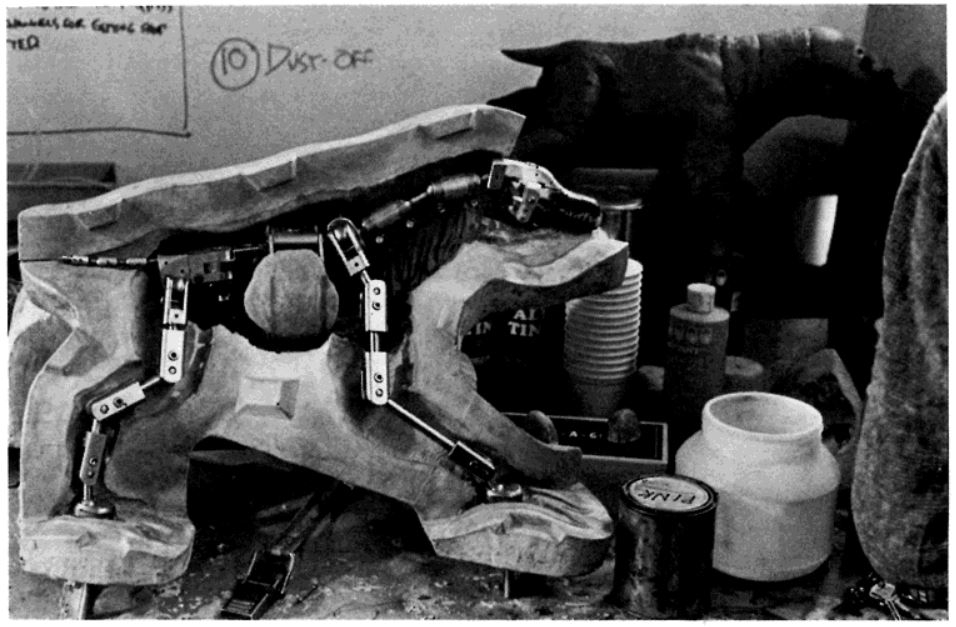 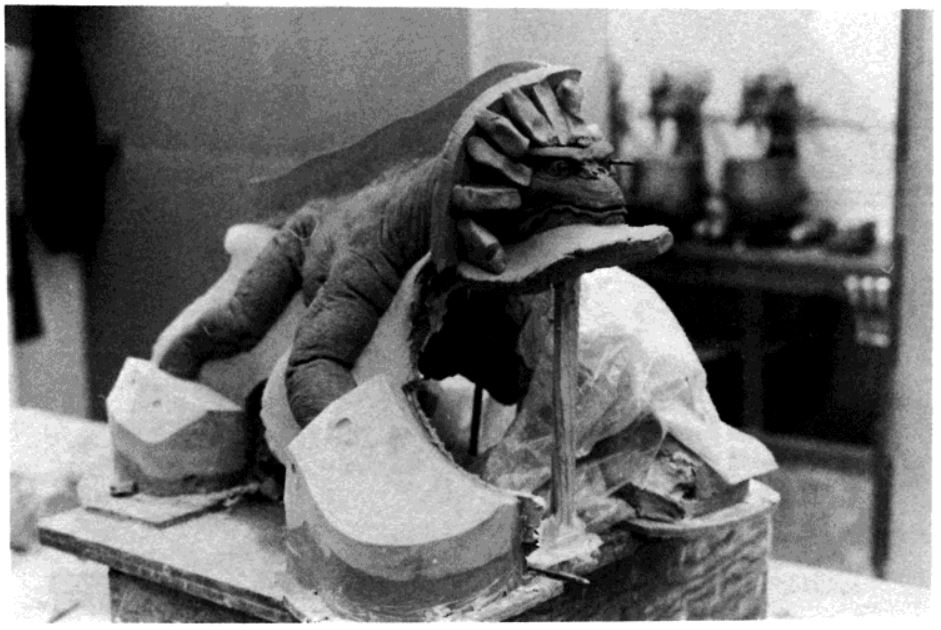 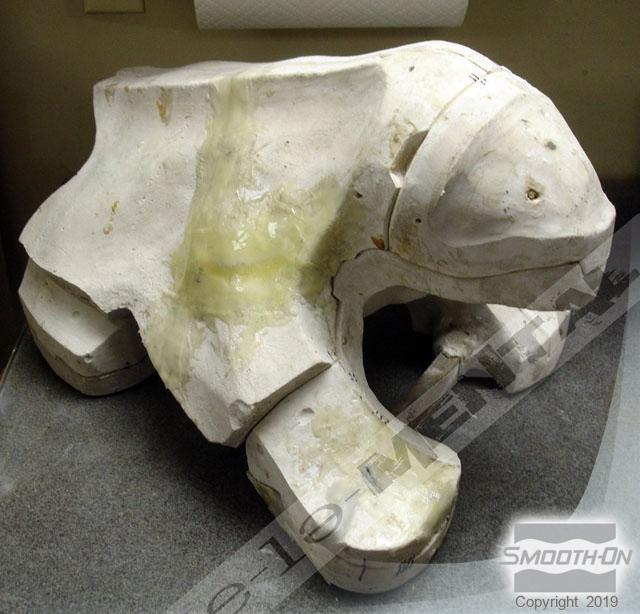 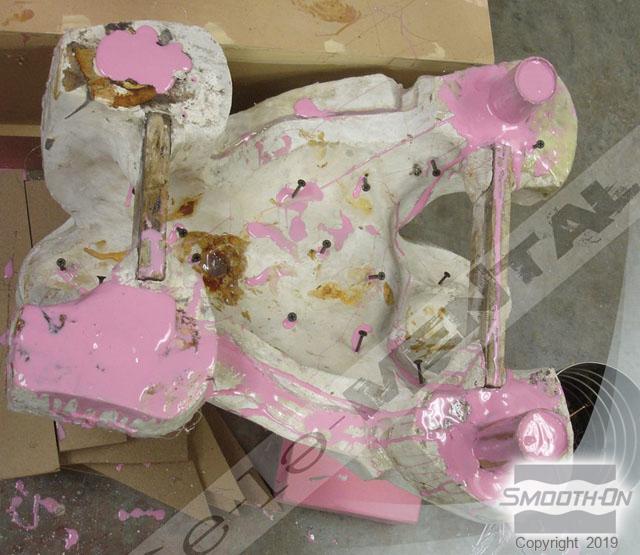 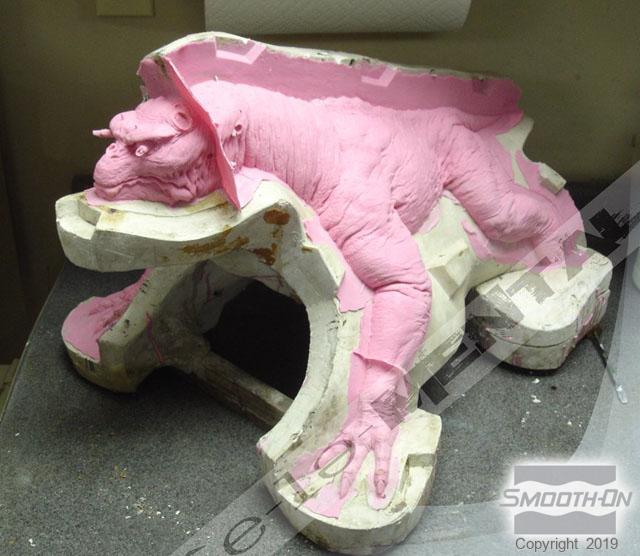 I could not find a lot of concrete information on exactly what type of paints they used or but various sources agree that the horns were sculpted from polyclay and glued on.

For budgetary reasons and ease of production I aimed towards recreating one of the static backup dogs.

Sizing and visual references:
For this I hit ABSOLUTE PAYDIRT when it came to good visual references. At the time I started the project Propstore held an auction that sold one of the original static male backup dogs. This puppet was in near mint condition and the propstore was kind enough to include a ruler in a profile pic, which made sizing a breeze. The puppet was also featured in one of Tested`s Youtube Videos.

I believe Tsukuda made a Terror dog vinyl kit molded from an original.

Too Much Garlic said:
Cool gathering of info.

I believe Tsukuda made a Terror dog vinyl kit molded from an original.
Click to expand...

Really? Could you find a link?

RPF PREMIUM MEMBER
I was curious so I googled it. The kit was made a long time ago. It looks cool, but I don't know if you'll find one...

There are 3 up for auction on eBay right now. It's 1:6 scale, so maybe not cast from original, unless they made static ones in different scales.

The design always struck me as interesting, with the much beefier front to the more slender rear. Very Bulldog-esque in feel.

Too Much Garlic said:
There are 3 up for auction on eBay right now. It's 1:6 scale, so maybe not cast from original, unless they made static ones in different scales.

The design always struck me as interesting, with the much beefier front to the more slender rear. Very Bulldog-esque in feel.
Click to expand...

I was thinking the same. The rear was also very humanoid, except for the reverse knee. It's almost like a gorilla-bulldog hybrid. The head and face is little bit of a mystery to me... Can't quite grasp the inspiration for those.

I get a feeling of something frog or toad like.

Too Much Garlic said:
I get a feeling of something frog or toad like.
Click to expand...

One of the 7 plagues of Egypt, from Exodus (bible pre-year-zero) was FROGS. So, ancient evil....as it were.

Jintosh said:
One of the 7 plagues of Egypt, from Exodus (bible pre-year-zero) was FROGS. So, ancient evil....as it were.
Click to expand...

Uuuh! That is a good point.

RPF PREMIUM MEMBER
There’s a bit of hyena vibe there as well.