Hello all, so this kind of slipped my mind, but I got my first ever movie prop, a shock baton from ghost in the shell.

Now, unfortunately I had wanted something else, and I kind of regret how much I paid for it, I wish I had gotten something with the hanka robotics logo but that was all way too pricy, so figured I'd share pictures and whatnot here with you guys. I've also been working on 3d modelling a bit so I'm hoping to try and make a 3d model of it, in different sections so that it's easier to print, and will actually have some definition in areas like the "spikes" along the outside of it.

I can't really provide good info on the material but I can tell you it's a hard plastic, and it's completely solid, except for the back section where a small battery could go, and metal for the switch which on the light up version activated a pretty basic microswitch. The grips, holtser notch and the "spike" protrusions appear to be separate pieces which were put on and blended together later.

The back section is some sort of different material, while similar it doesn't have the same finish, and is fairly loosely cut to be a back cover. IT was lightly glued on aside from the screw but I removed it to see if the whole unit was hollow as I wanted to add lights into it (I bought this instead of the light up version because it was in better shape).

The clear parts at the end are likely just acrylic to diffuse the light if they had installed it in this unit, and it's hot glued or something similar into the prop.

Hopefully this info is useful to some of you, I can do my best to provide measurements, (I have digital calipers which are cheap but mostly accurate). I had really wanted to get one of the knives, and try molding the handle and putting it on a replica blade that was real metal since silicone molding always seemed fun to me, but alas, I ain't rich lol.

Also if there's a better spot to put this or a megathread I couldn't find by all means let me know.

Here's The Album, figure it's better to link it than make a thread with a crapload of images in it unless that is preferred here, also the 3.16mm picture is the height of the little "spike" protrusion.

p.s if an admin can modify this to add appropriate tags to help people find it, as I can't add any, that would be great.

Edit: oh yes, the whole thing weighs in at 344 grams, and I had a smallish cylindrical high voltage module that I have a feeling would fit quite well into one of these if I get around to making a 3d model of it, though I'm guessing some of you guys here could probably make one of this in 15 minutes,
Last edited: Jun 27, 2018

Nice purchase! And thank you for sharing all the pics and size references. :thumbsup
X

Re: Ghost In The Shell Shock Baton Pictures/Measurement Refference Album.

Well, it's pretty slow going but I'm figuring out tricks with this software that gives me results that are at least pretty close to what I need, I don't think I'll ever be able to exactly replicate the curves in the cut for the handle grip, but it's coming along fairly well IMO, since I've never even tried modeling something cylindrical.

Getting all the details on the front half is going to be hard though.

Also luckily I have a relative who is in and out of town who has a 3d printer that can usually do fairly rough prints for me since I can't really afford to spend that much on one, it's definitely going to need to be in multiple sections due to how long it is though. 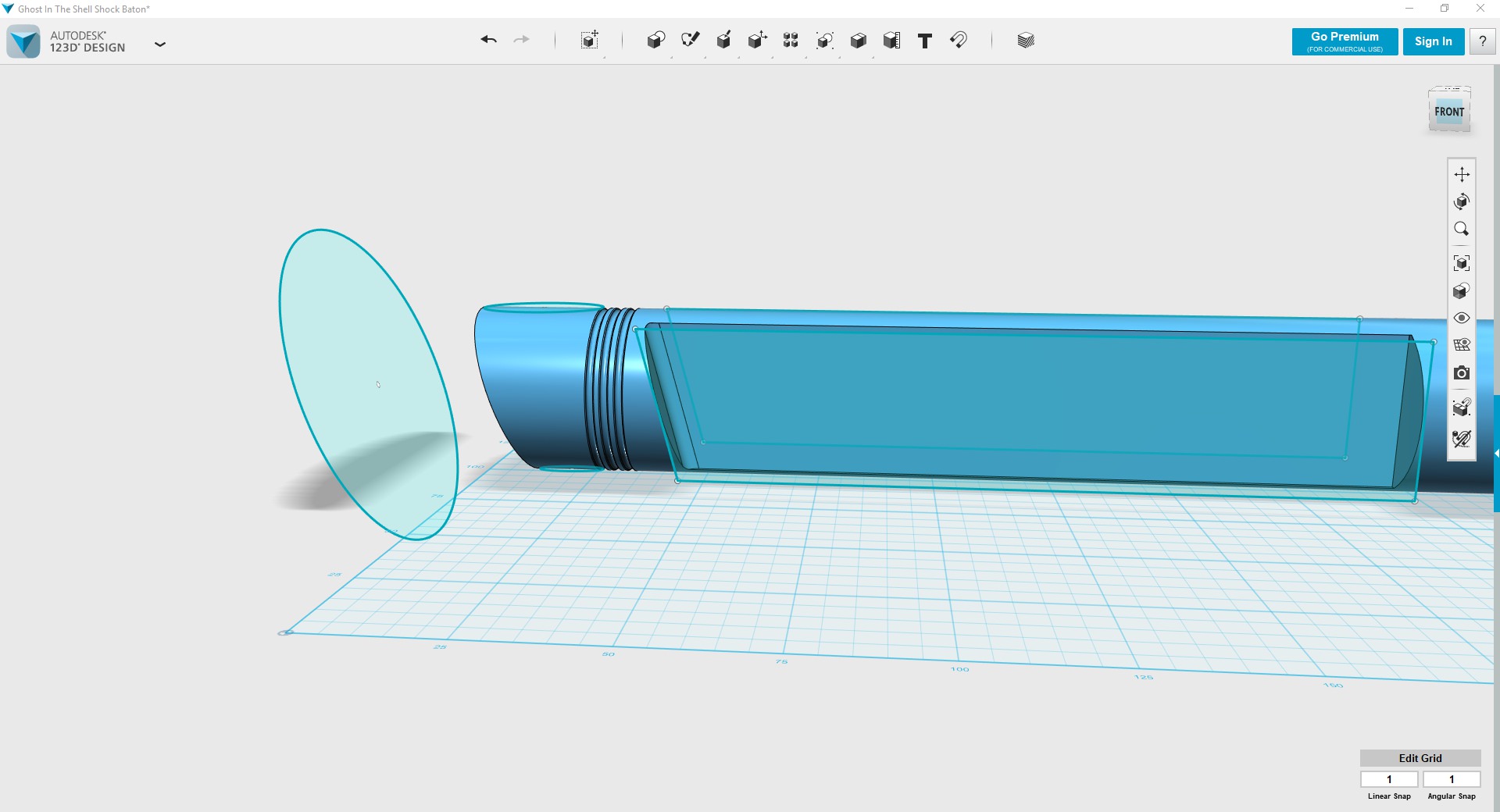 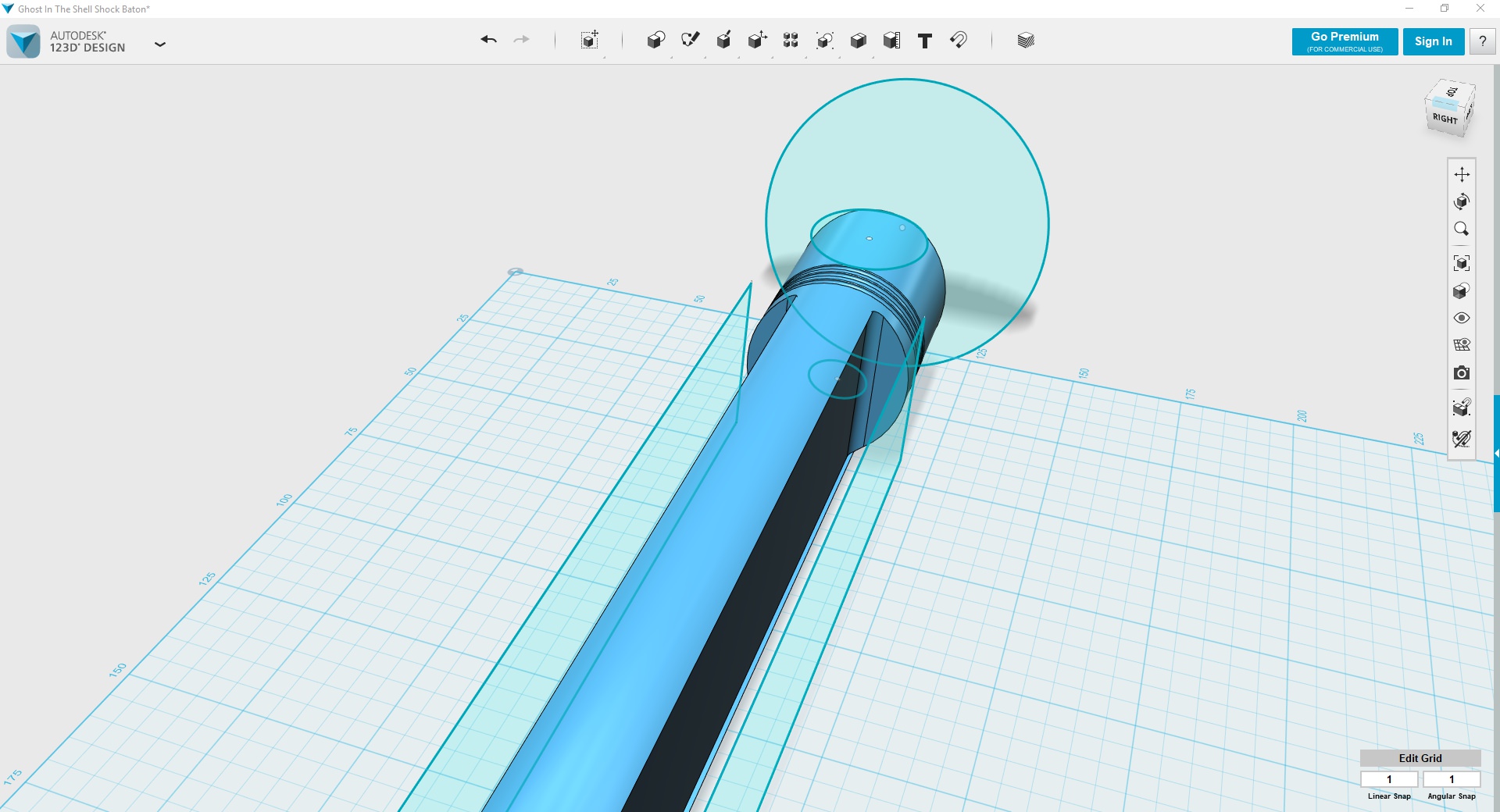 Got a tad more done during lunch, but I can't figure out how to mirror the whole object lol, I'll have to figure that out after work to get the other grip done. 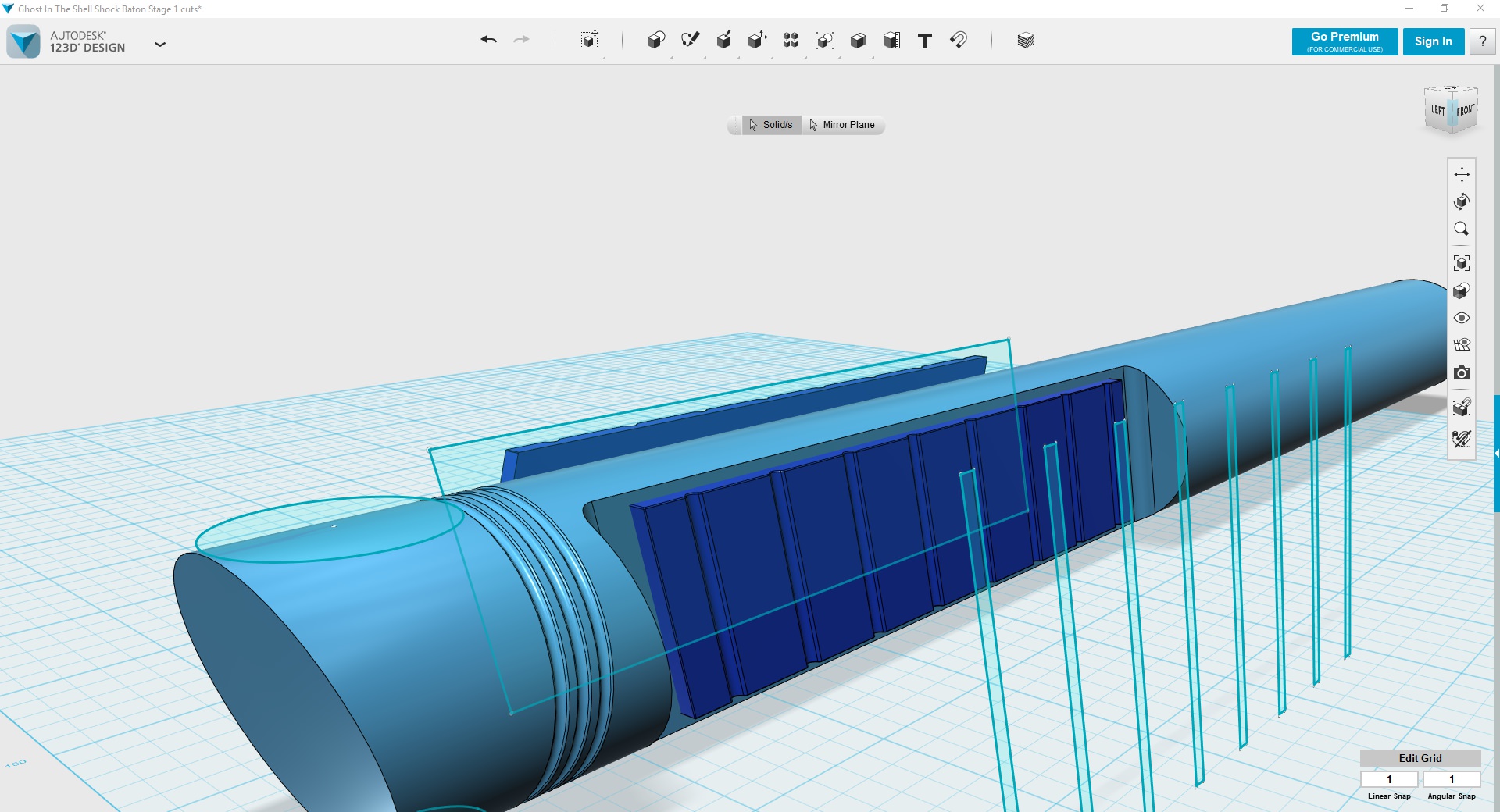 That's all for today, looking into getting some sections printed to compare, unfortunately I don't think I'll be able to be as precise as I want, I am pretty OCD about this sort of thing, but then again this thing isn't perfect either and there are little fluctuations in distance and whatnot all over. Right now the big thing to try and get right is the space around the handle grip. The depth of the thumb rest sort of area will probably be a tad off as well, since I just used a circle for it, it seems to be slightly more oblong in person.

I've been saving it in various stages so that if I need to go back and start from one section again, god forbid, it at least won't be a huge amount. The pictures I'm posting basically are each "step".

I think the grip is a tad short lengthwise but pretty close aside from that. This thing is probably a lot easier to do than those ones on the auction that were attached to a battery pack, but damn those were gorgeous.

Also going to be slightly annoying that the 3d print will probably feel a lot different in the hand, but man, if I went all out and got the main body done in aluminum, and the grips in some sort of rubber and integrated that high voltage module as well as some lighting effects... well, that would just be freaking awesome. Expensive, but awesome. 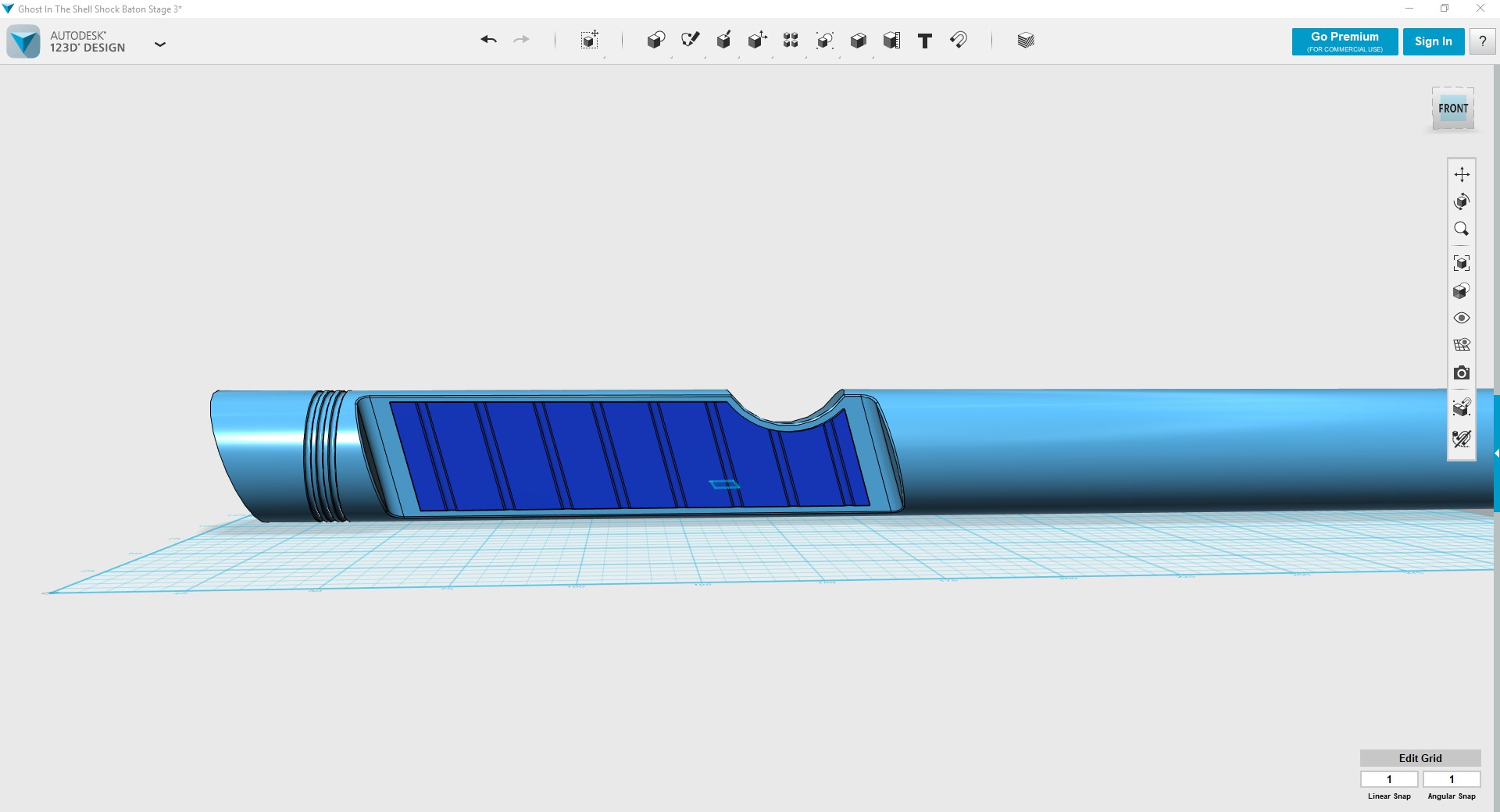 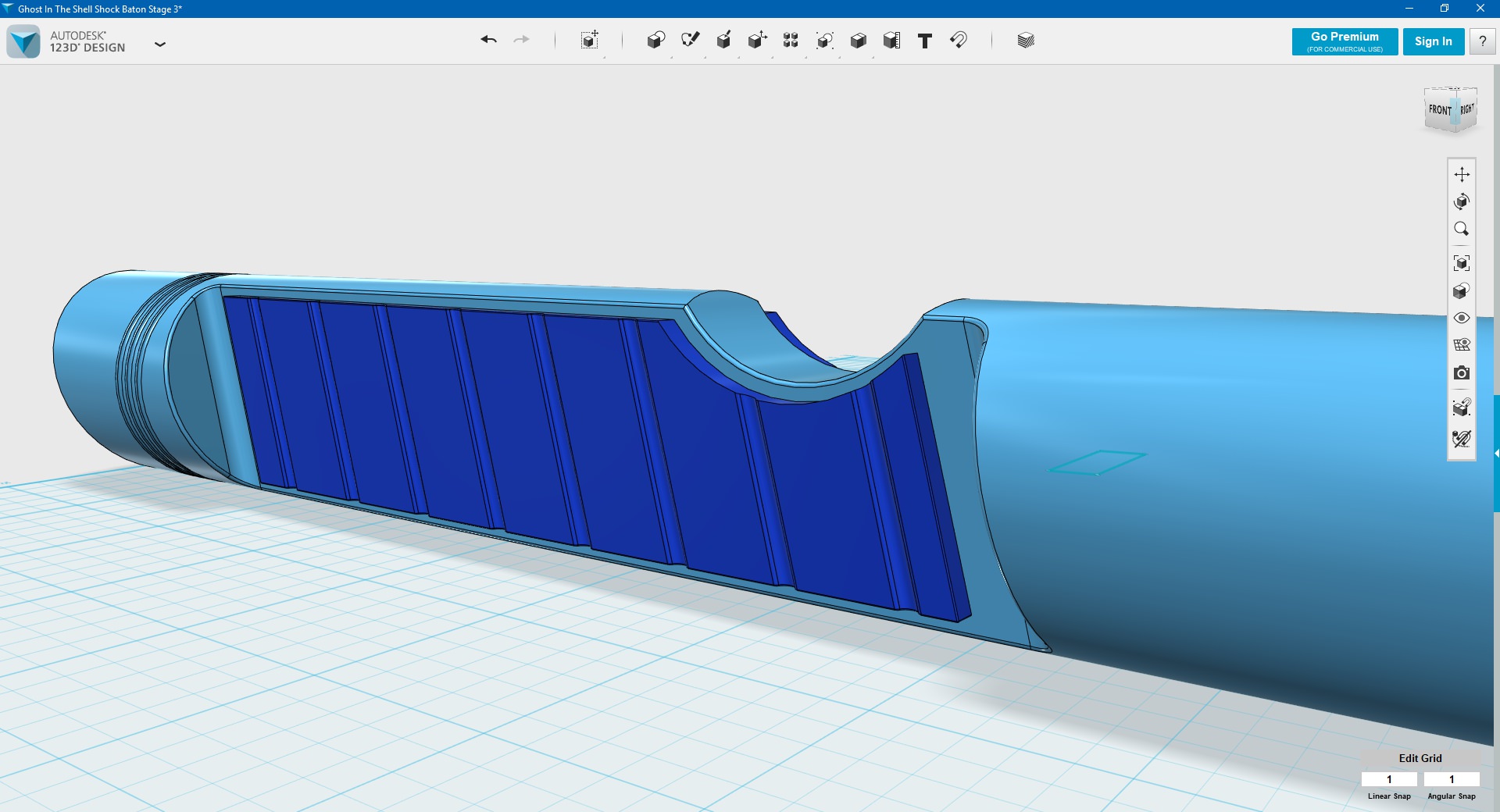 I also figured I should add a little something extra on the end cap, very rough of course, but I figure Hanka would have manufactured this device as well. 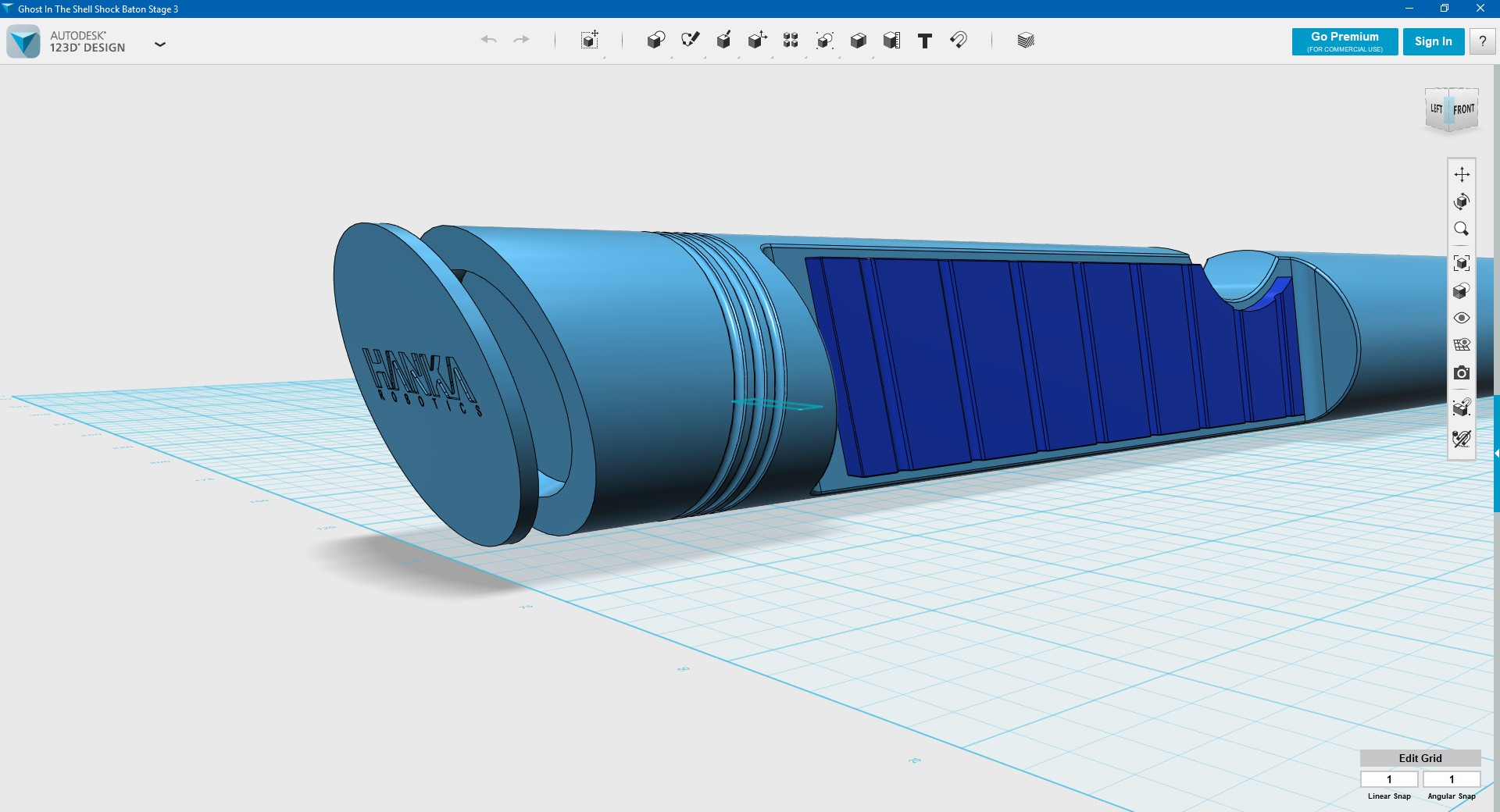 Hi all, so, this is a bit of a necro for sure, but I kind of forgot about this project. I got stuck trying to do the details on the front half of the baton in 123d design because of how limited it is.

Well, I've recently started using fusion 360,and spent the last couple hours on this from scratch and I've made good progress, the model should be finished soon! (casting these myself would just be too expensive)

The little spikey bits will be separate parts since it looks like they were originally and it will work far better for printing that way, and I'll make a dxf to cut out the acryllic at the end. Guess I didn't mention it in the original post, but I have some high voltage modules, so I'm going to make one that actually has an arcing spark at the end which will be badass for sure, but my model would also work to make a lighted version alone.

It probably won't feel quite right in the hand compared to the original, and obviously it will need sanding work or acetone smoothing, but yeah, it would cost over half a grand for the stuff to mold and cast these.


I do kind of miss that blue color that 123d design had on everything. 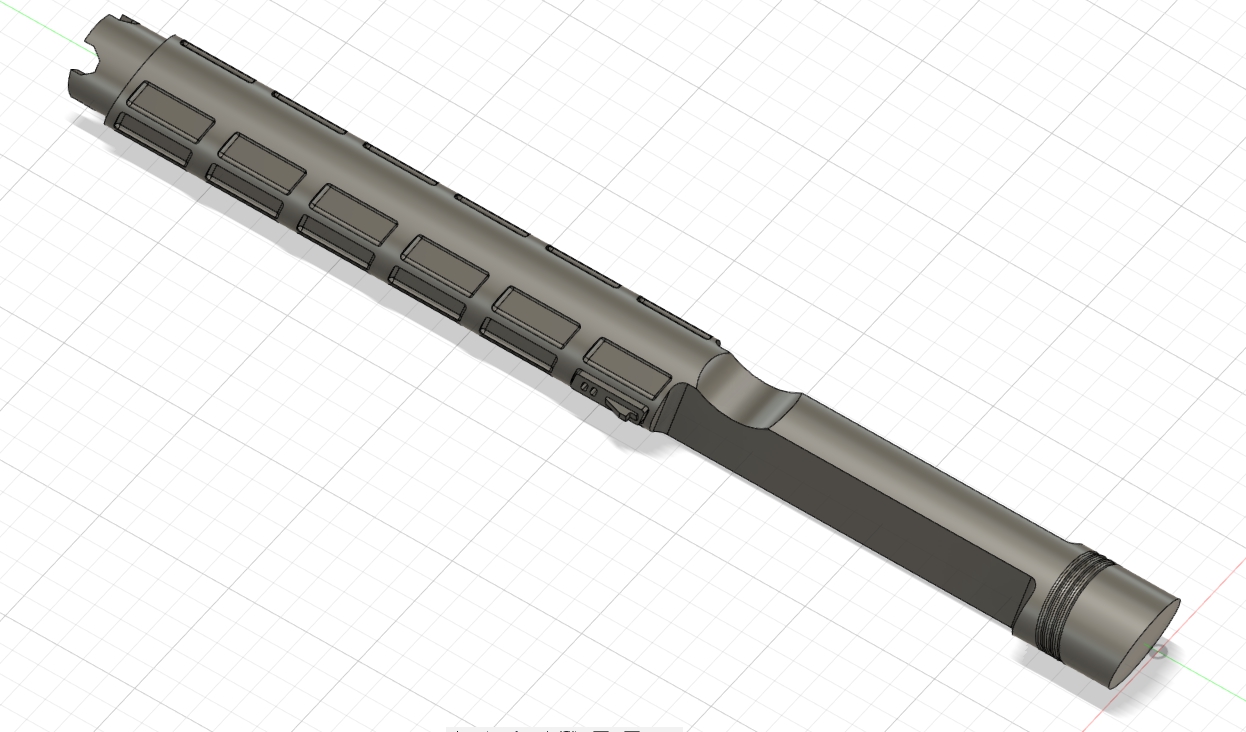 On the plus side I have some far higher quality calipers now.
X

I could also make a version which has the spikes all connected if the whole thing was going to be printed out in resin, or sintered nylon, I might be tempted to have one like that made for myself, but finishing it would probably be tough and I'm sure it would be expensive.

So, I didn't want to remove the acrylic in the end, it seems to just be hot glued in and might even have some leds behind it, even though this specific one wasn't a light up version, but I don't want to risk damage or really tamper with the prop to keep it original.

I've measured what I can, and eyeballed the rest and it's pretty good for the end bits. The grips are done as well. 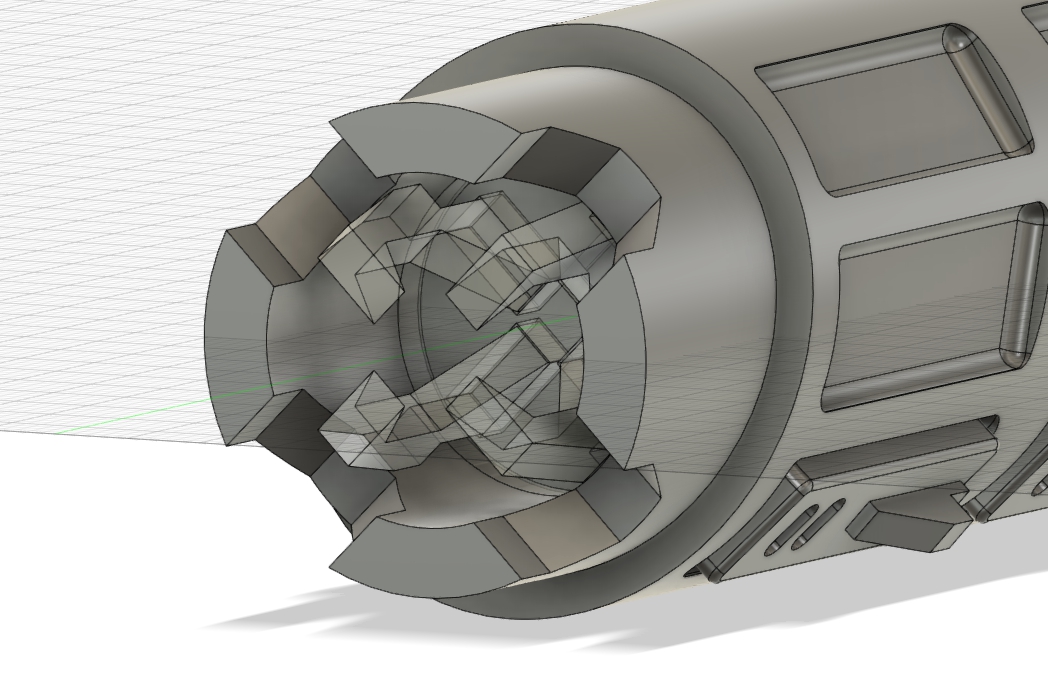 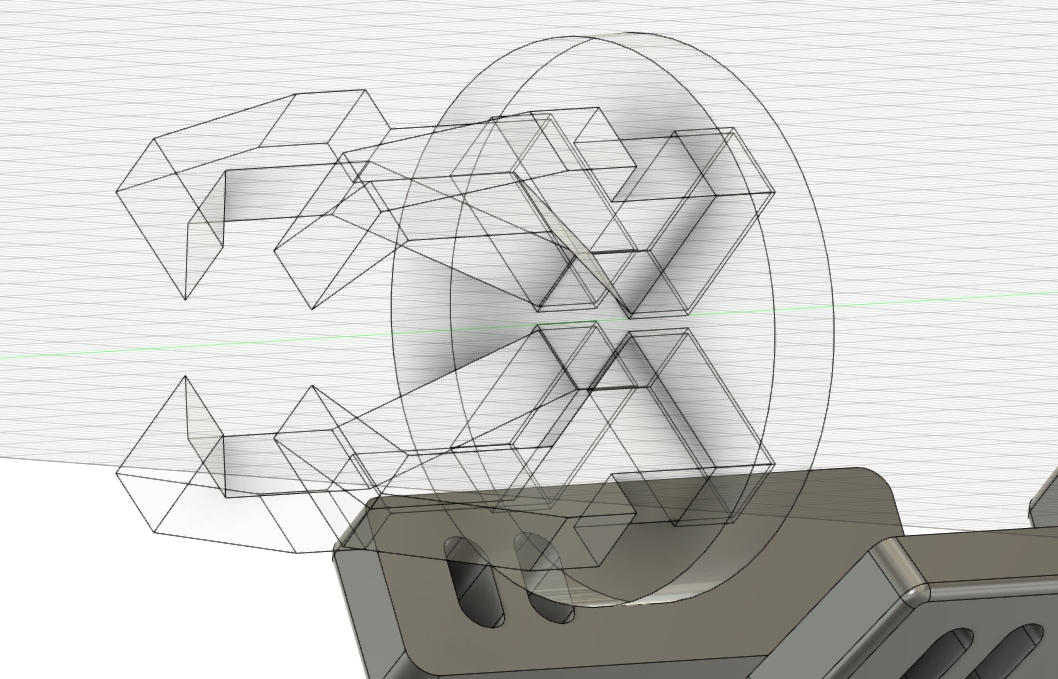 Need advice from the Ghostbusters experts.
2