"Moon (2009)" is such a fantastic movie. Directed by Duncan Jones (David Bowie's son), the movie was a low budget production and a minor commercial, but huge critical success. It won numerous film critic and film festival awards and it was nominated for the BAFTA Award for Best British Film. It pays homage to quite a few Sci-Fi movies, and in particular to "2001: A Space Odyssey".

As a big fan of Sci Fi movie props, I was immediately drawn to the board computer, GERTY 3000, which, with a soothing voice (by Kevin Spacey) and an illuminated eye, is a wonderful nod to HAL 9000 from 2001: A Space Odyssey. Some time ago, I built a HAL 9000 replica and, a little later, another one, featuring sound modules that can play all of HAL's phrases from the movie. After watching Moon, I felt that I also wanted a GERTY 3000 as office companion that can do the same. And, as far as I can tell from my Google searches, nobody has yet built a full-size version of GERTY.

References
As usual, at the beginning of a build, I start looking for references - and I want to share these here. Some references below are specific for the build, and some are more general about the movie. And although there were not too many (in particular, when compared to HAL 9000), I still found some extraordinary ones. 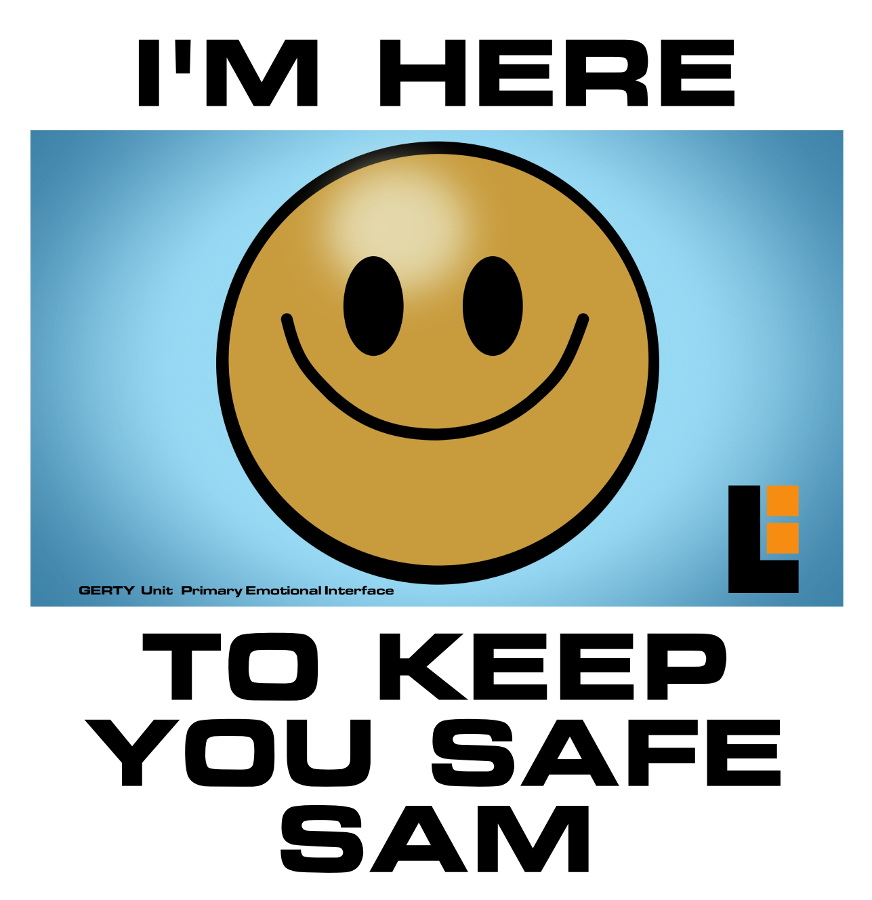 TFS with us and thanks for the links. Always loved Moon

One of my favorite films. I was going to recommend Gavin Rothery's blog, but it looks like you're already aware of it. I'm excited to see what you come up with.

Rymo said:
One of my favorite films. I was going to recommend Gavin Rothery's blog, but it looks like you're already aware of it. I'm excited to see what you come up with.
Click to expand...

Yes - that blog is a great resource! For any Sci Fi fan, not just for fans of the movie, or for replica builders...

RPF PREMIUM MEMBER
Very excited to follow this thread. This is such a great underrated movie.

RPF PREMIUM MEMBER
Fantastic project! SO happy to se one of these finally get made!!

RPF PREMIUM MEMBER
Moon is a fantastic film. Good luck with the build.

Thanks everybody for your interest! Obviously, for a build like this, the group of people who may be interested will be a little smaller than for a Flux Capacitor, R2-D2, or HAL (although, one can never be sure ... when, some time ago, I showed my Flux Capacitor to a friend, he said "Looks great! - What is it?" ). So, it's nice to see that some here share my love for the MOON and for GERTY.

Planning the Build
From the movie, or the production pictures in the links above (this photo has director Duncan Jones with an early version of GERTY), you find that, in contrast to the HAL 9000 face plate, GERTY 3000 is actually a huge device. 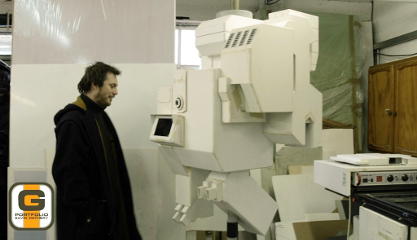 And I simply do not have enough space for the whole unit in original size. From the two options of either building a smaller scale model of the whole unit or just the front piece in original size, I chose the latter. This allows me to have GERTY's screen in original size, which is the main attraction for me: Displaying the beautiful emoticons, or "Gerticons" as suggested at "Typeset in the Future".
I took the screen as a starting point. In his blog, production designer Gavin Rothery describes that they used a portable 7-inch DVD player for the screen, but later replaced those images by CGI renderings of the Gerticons. I want to use a Raspberry Pi for this, and ordered a 7-inch LCD display with a resolution of 1024 x 600 pixels from Aliexpress. Starting from the size of the screen, I design the rest in order to keep the proportions. I am building this from plywood (3/16" thick) using a laser cutter. The laser cutter files are made using the open source software librecad. Here is an early, very preliminary sketch comparing GERTY 3000 with my HAL 9000 replica (my daughter helped me with the Gerticon). 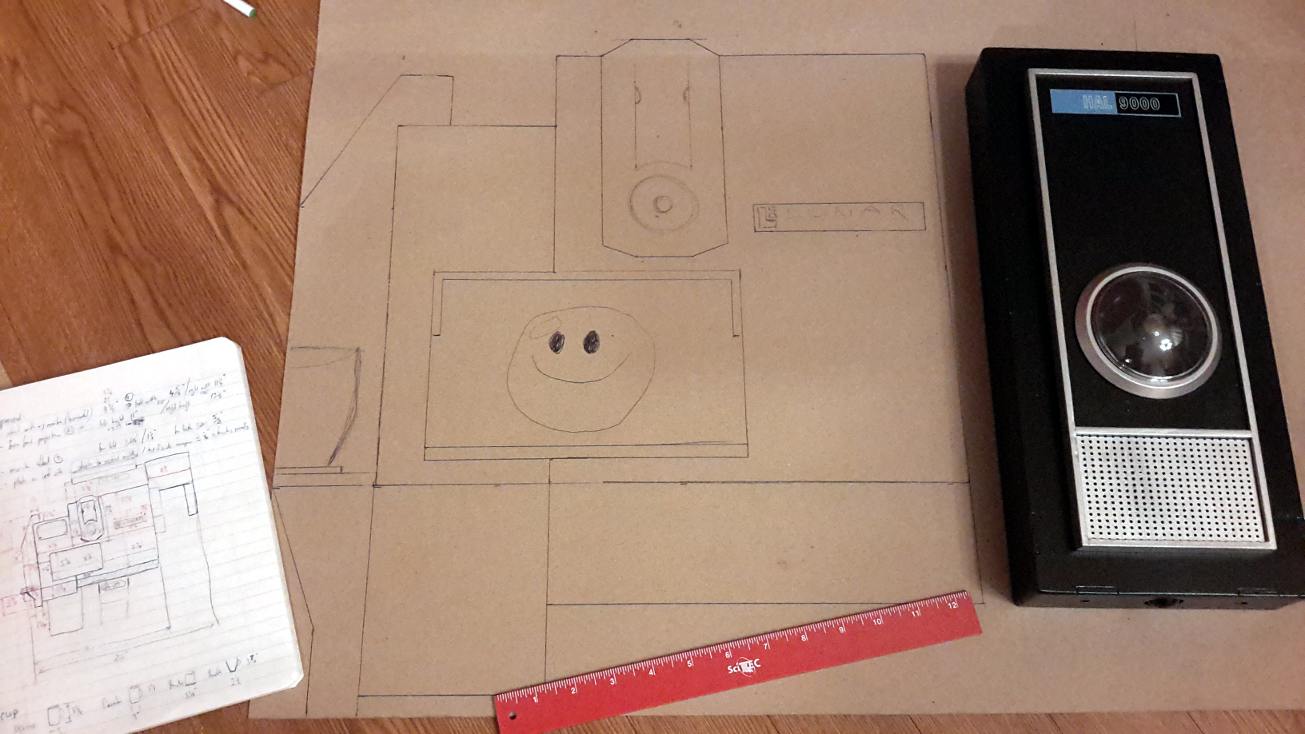 The final prop will have (at least) the following functions: Like my HAL 9000 build, it will feature an infrared motion sensor, and when it senses motion it will play GERTY's sound clips from the movie. This responsiveness is what makes my HAL 9000 such a nice office companion (of course: one must limit how often the sounds get played - otherwise it can become quite annoying). Every 15-40 seconds (with some randomness), it will also change the Gerticons displayed on the screen. This will make it like a "real" GERTY 3000.
On top of that, I may add a few practical features like a tea timer, an alarm clock for regular scheduled meetings, and maybe options to display weather information and news. The Raspberry Pi should also be able to do voice recognition which would really be impressive ("Gerty, display the news"), but that may be substantial programming effort, and I'm not sure if I really want to pursue that. But I can decide that later...
Last edited: Sep 17, 2020

Gerticons
GERTY's faces ("Gerticons") are the essential elements that allow him to express emotions.
The original designs from Gavin Rothery that were displayed on the 7" DVD player looked like this. 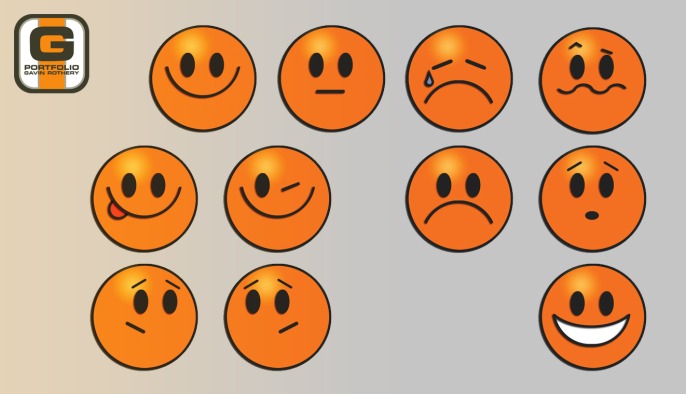 But later, in the movie, they were replaced with CGI versions that were more yellow, and on a blue background.

While waiting for the LCD screen to be delivered from China, I decided to create the Gerticons - of course, like the CGI versions that we see in the movie. I made them, to match the 1024x600 pixel resolution of my screen. Using the "Gimp" software, starting with an empty blue screen that is darker towards the corners, and adding the "Lunar Industries" logo in the corner, plus the bottom text: "GERTY Unit Primary Emotional Interface".

On top of that I create the set of the ten different Gerticons:

RPF PREMIUM MEMBER
this is a great film, looking forward to your progress!!

GERTY's voice
Now that the faces are ready, GERTY needs a voice.
Some time ago, with the build in mind, I went through the movie and documented all of GERTY's dialog. Just like I did before with HAL 9000's sound bytes, I also posted a comprehensive list of GERTY's pieces on my blog.
Then, I used the method described in another blog post, to rip the DVD audio track, isolate, normalize, and fade in&out all the individual clips, using the free and/or open source software Handbrake, VLC player, and Audacity.
Fun fact: According to my numbering scheme (which is rather arbitrary, since sometimes I am cutting longer sentences into two pieces) GERTY 3000 has 97 audio clips, as compared to HAL 9000 with 95 audio clips (I am using only the pieces from the 2001 movie - in 2010, there is usually too much background noise or music for those clips to be usable in a replica).

More Screens
In addition to GERTY's faces, I also created a set of screens for other purposes.
The first one, the "booting" screen, is a replica of a screen that I have seen somewhere (probably on Gavin Rothery's blog), but can't remember seeing it in the movie. Once you have a "booting" screen like this, it makes sense to add a corresponding "shutdown" screen. I also made a screen with the "Lunar Industries" logo, and a series of the "L" symbol in three sizes.

The next screen reflects the sticker on GERTY's top.

The following image, signaling the arrival of the "rescue" team is displayed on another computer, but I will also use this for GERTY. A nice detail is the photo on the left - this is Gavin Rothery, GERTY's dad. 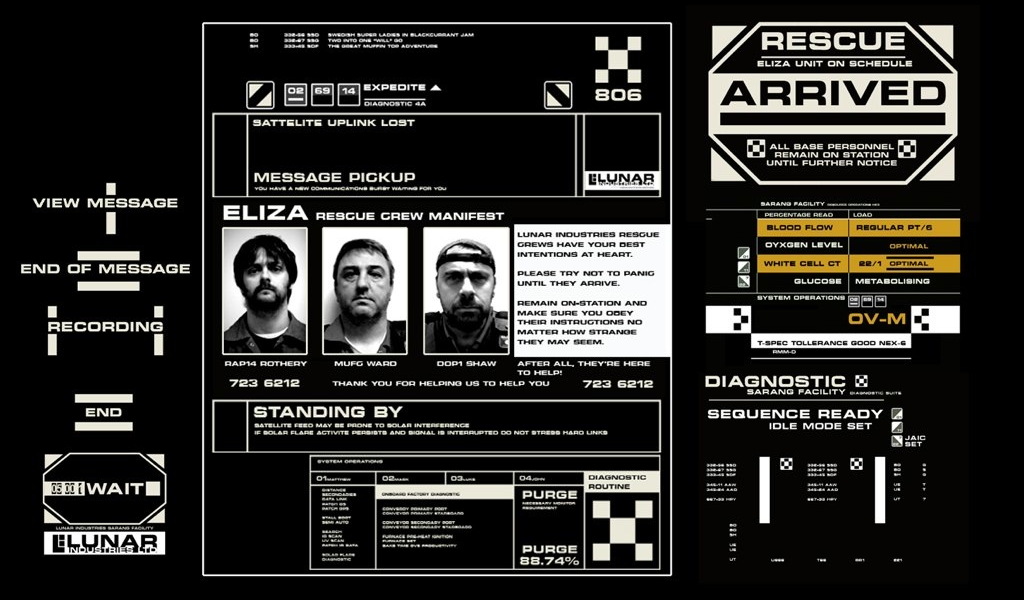 I also couldn't resist using an image of Sam Bell on white background which I transferred to the blue background featured on the Gerticons.

With that same background, I made additional images indicating that the tea timer is running and that the tea is ready.

To share more files (including the screens and GERTY's sound clips), I have created a GitHub page - I added the GitHub link to my first post in this thread.

The holder (and the rest of GERTY) is made from 3/16" plywood using a laser cutter.

This piece now serves as a reference, based on which the rest of GERTY is built to scale.
Using a few photos, I compare and measure the sizes on my computer screen, and scale these so they correspond to my LCD screen and the screen holder. 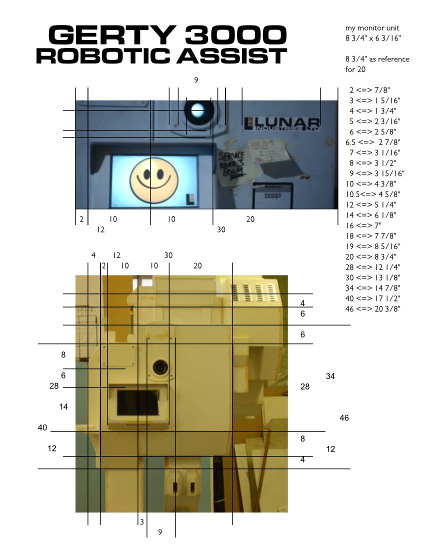 The numbers in the images are in arbitrary units, and the top right table translates these into inches.
Then I compare my measures to a sketch that I found in one of the resources given above. 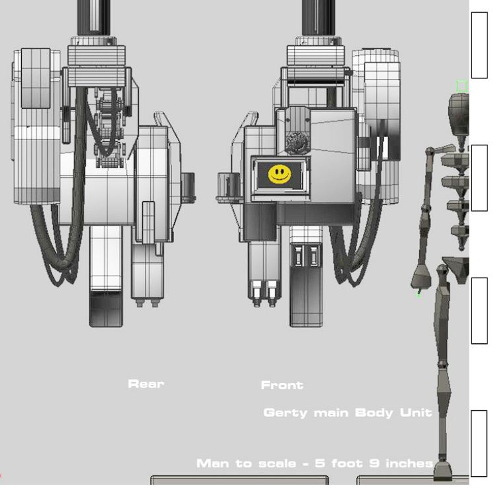 I assume that the person is 5'9" tall. Then the rectangles on the right (and the spaces in between) are each 1 ft. Based on this, my GERTY is about 85% of the size of the original prop (or about 90% if the person was 6 ft tall). I still consider that "original size".

Enclosure - main piece
Around the LCD screen holder, I am building the "main piece" of GERTY's body.
Gluing the pieces as they come out of the laser cutter...

adding a little support in the corners...

plus lots of smoothing and sanding.

This is one step where I am not good at. It really requires lots of iterations - but I just can't wait and always want to continue. A closer look at the large hole (for the eye) reveals poor planning: I forgot to add that hole in the laser cutter file - so I had to cut it out by hand. But it's not a big deal, as the poorly shaped edges will later be covered by a precise laser-cut ring.

Here come the angled piece at the bottom. This is where I will place the two speakers (how nice to have a laser cutter when you need speaker grilles).

The first additional detail: The raised piece on top of the eye.

And here is everything so far. 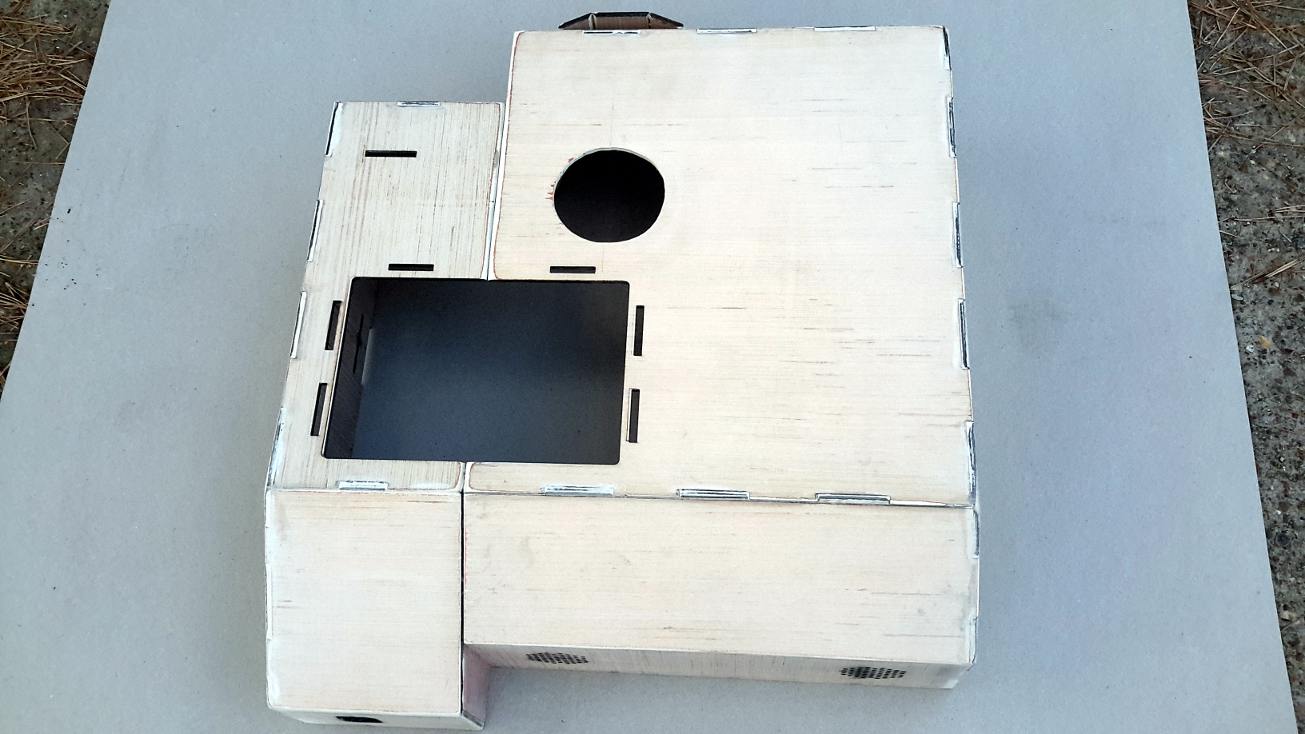 A first glimpse of GERTY!

Details (1.)
Next comes the flat piece at the top.

The squared opening is where the PIR infrared motion sensor will be placed.
Then everything for the left side: First, the cup holder,

then the "oddly shaped piece",

and here both are assembled.

The new pieces add a lot to GERTY's appearance. 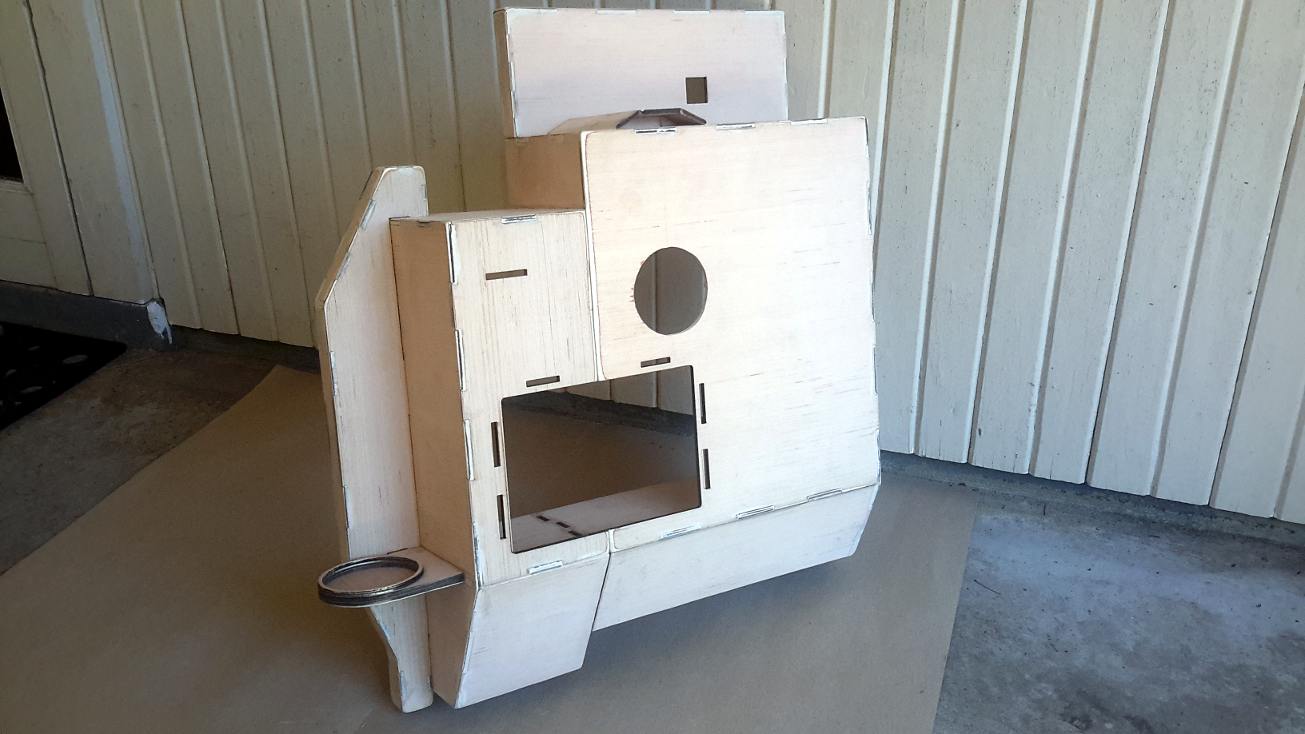 LTsmash1200 said:
Very excited to follow this thread. This is such a great underrated movie.
Click to expand...

This movie really put Sam Rockwell on my radar. Thank you for sharing this project. Amazing story and pics! Cannot wait to see you bring GERTY to life.
M

Have you found an easy way to add the tabs and slots for assembly or are you doing it all by hand?