If you remember the cartoons from the 80's, the Galaxy Rangers was always one of my favorites, and I credit it with being Proto-Firefly, with it's Western Frontier in Space theme.

so after purchasing the series on DVD and screen grabbing as many images of the ship for reference, I did a 3D model of the ship, and then turned that into blue prints

I wanted a studio scale model, but because it's a cartoon, and the size of the ship changed based on who was drawing it, I wound up having to just take a guess at it's actual size, and then decided to do it roughly the same size as a studio scale X-wing

From there I started building

Could you post some of your screen caps and your 3d model?

and here's the intro for the series
http://www.youtube.com/watch?v=k3EoBl5uBfU
Last edited: Feb 21, 2012

One of the best 80's intros for sure, always liked that ship... good luck!

I have more done, but I haven't had a chance to take pics of progress

That ship design is actually pretty cool looking. Whomever did the art design for the ships on that show did a pretty good job all around. Almost like an inverted Viper and X-Wing crossover. A model of that thing would be very nice to see IMHO.

What a great idea for a project! The Galaxy Rangers never get enough credit, you're right. I do recall making the Firefly comparison when it first debuted, but most people thought I was talking about the Power Rangers. lol Keep up the good work!

all the main parts are done, now it's time for scribing and detailing

ahh man!! i loved this show as a kid!!, i can't believe your building this!! awesome!!!

got more done, just haven't had a chance to take some pics.

I decided to ILM up it a bit, with some a touch of exposed pipes and parts.

just a little bit of seam clean up to do, pop in the last details on the engines, and she's ready for paint

No guts, no glory!

Just caught up with this thread.
This is cracking!
Due to it being a cartoon How much of the build would you say is "artist licence" ?

Thanks for the kind words.

And here I was wondering if anyone was really all that interested.

The shape of all the components is as accurate as I can make it, but because the scale of the ship is indeterminable... different artists made the cockpit seem larger or smaller. The details inside the cockpit are placed according to reference, but details vary, so i did what I liked.

I did reference a lot of screen grabs, and in a lot of cases, went with the detail that I liked the most. In the case of the details on the engines, I found pictures of a toy Interceptor that was done, and used that as a reference as well.

The entire back end is artistic interpretation. It should just be flat, with some raised panels. And some of the smaller details, like the pipes on the side are my own touches. So I would say shape-wise it's 100% accurate. Scale wise, I'm as close as I can be 90%+. And detail-wise, everything that should be there is, but I wanted something that had the look of a filming miniature, so I've embellished it to make it more visually interesting.

I'm actually ready for final assembly, so finished pics will be coming soon... Was saving the big finish for my 1000th RPF post.

Adding all the extra detail on the back will certainly give it that more realistic look.
Looking forward to the final result!

Well, one thing to keep in mind about model projects is the ones that aren't some version of the Enterprise or an X-Wing don't tend to get quite as much traffic as those that are. The more obscure the project, the less the reply interest (sort of like a quaint out of the way coffee shop versus a bunch of Starbucks outlets). But, if YOU like it and wish to keep pressing on, that is the real reason to tackle something like this.

In my case, while I have never seen Galaxy Rangers, I am still in love with the design of ship as it looks great. And I love the little tweaks you are doing to turn this from a 2D animated ship into a physical 3D object. I can't wait for the paint stage to begin.

And at long last the Galaxy Rangers Interceptor is done....

Hope you all enjoy. 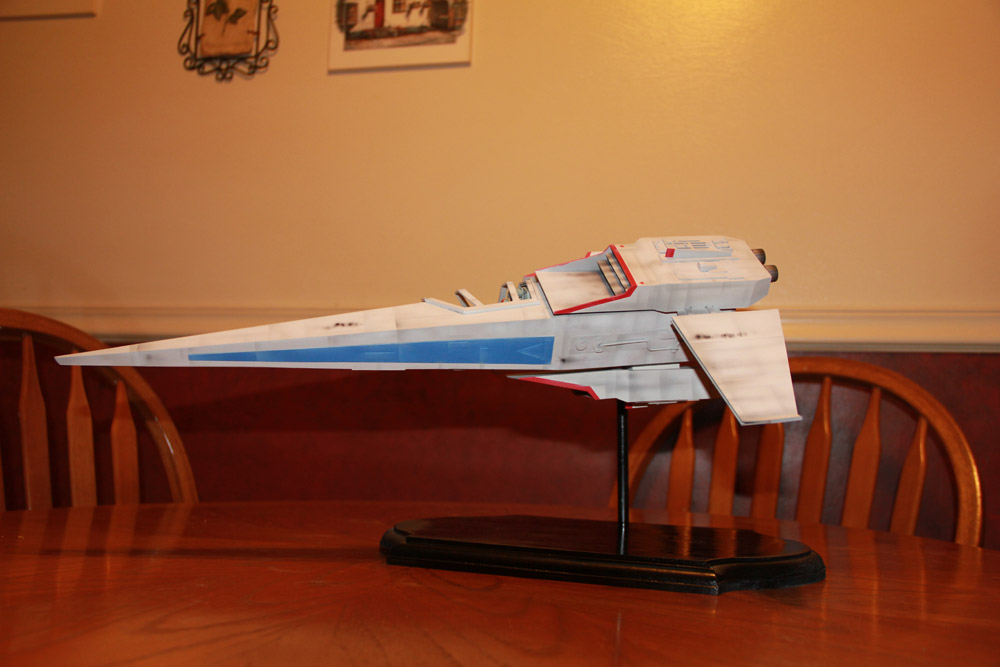 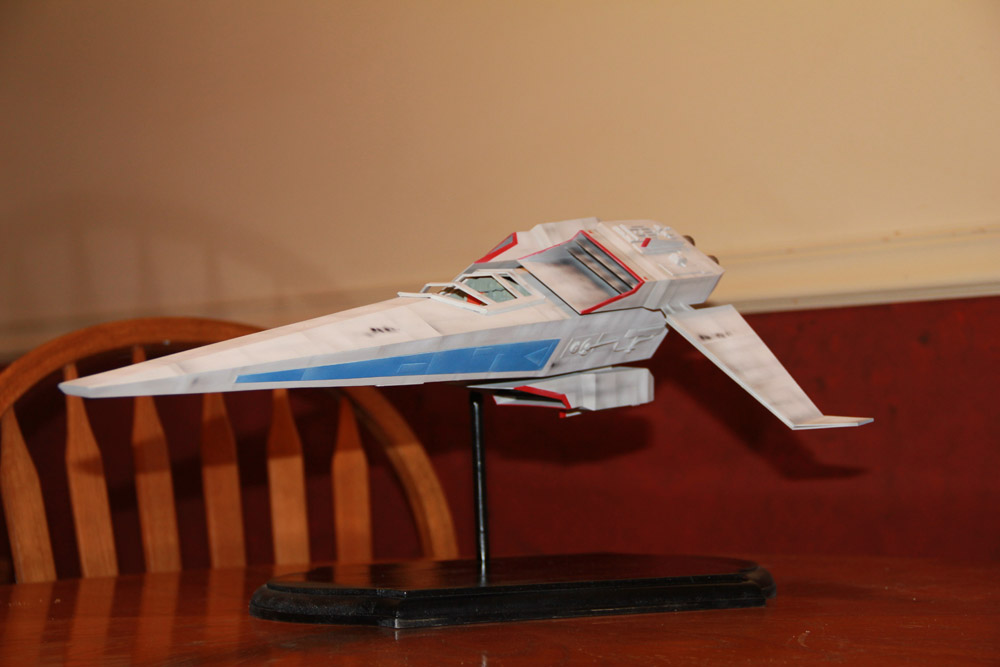 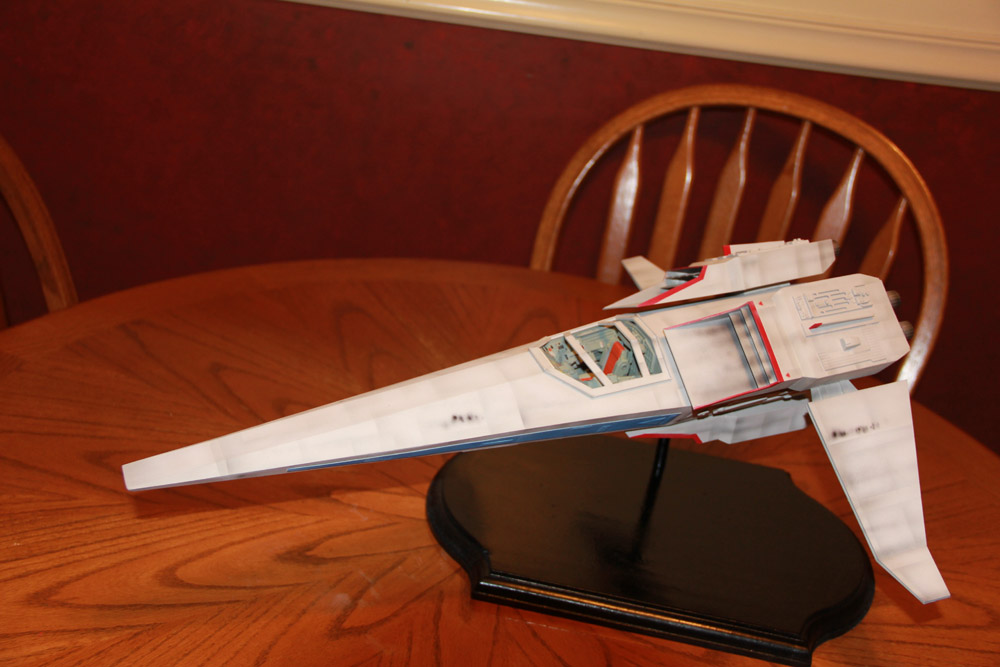 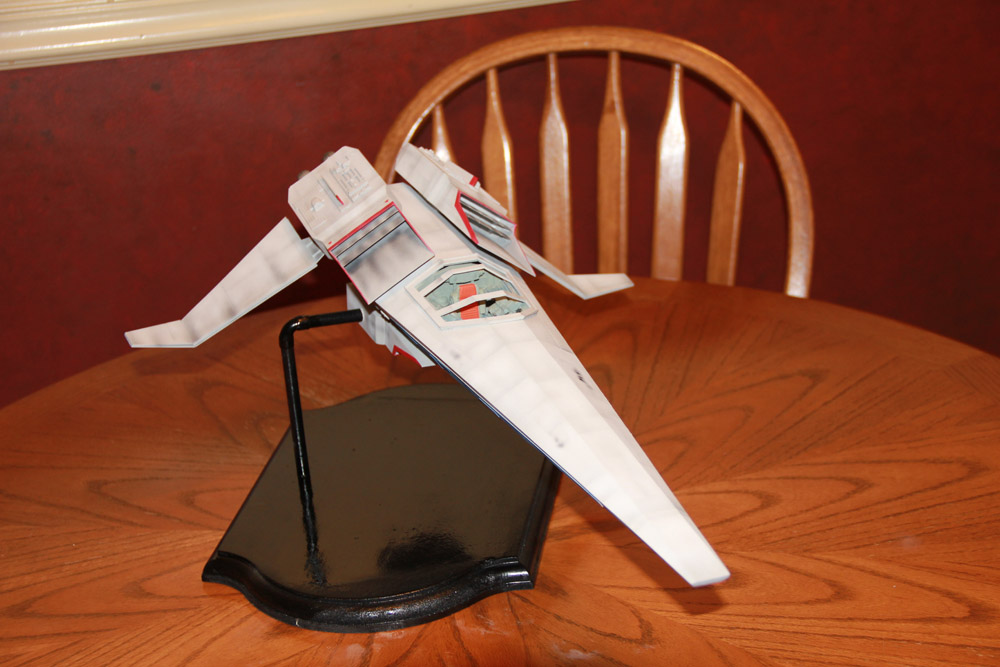 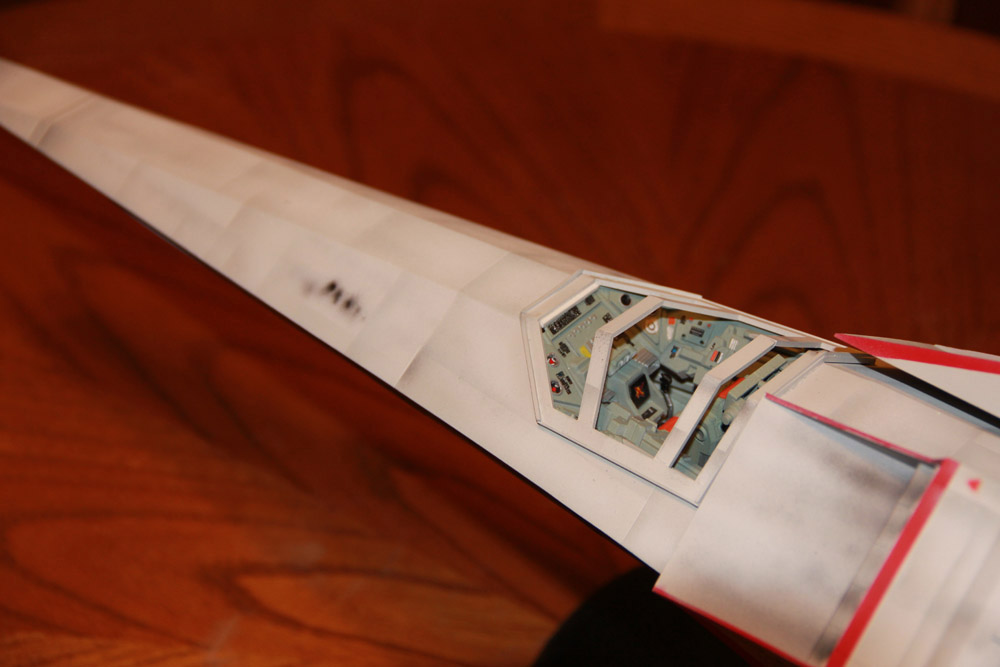 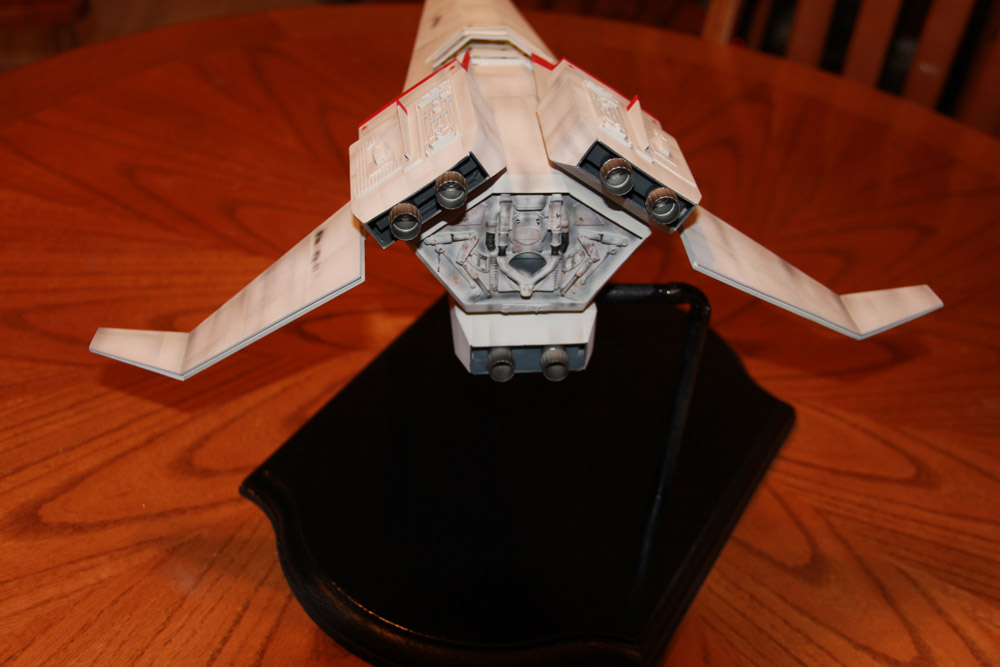 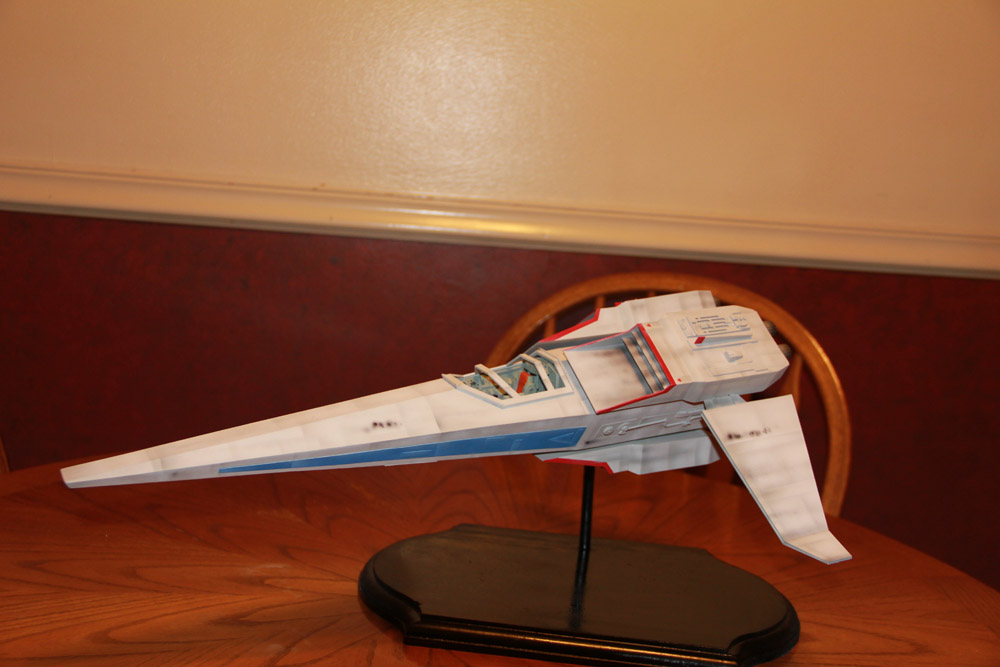 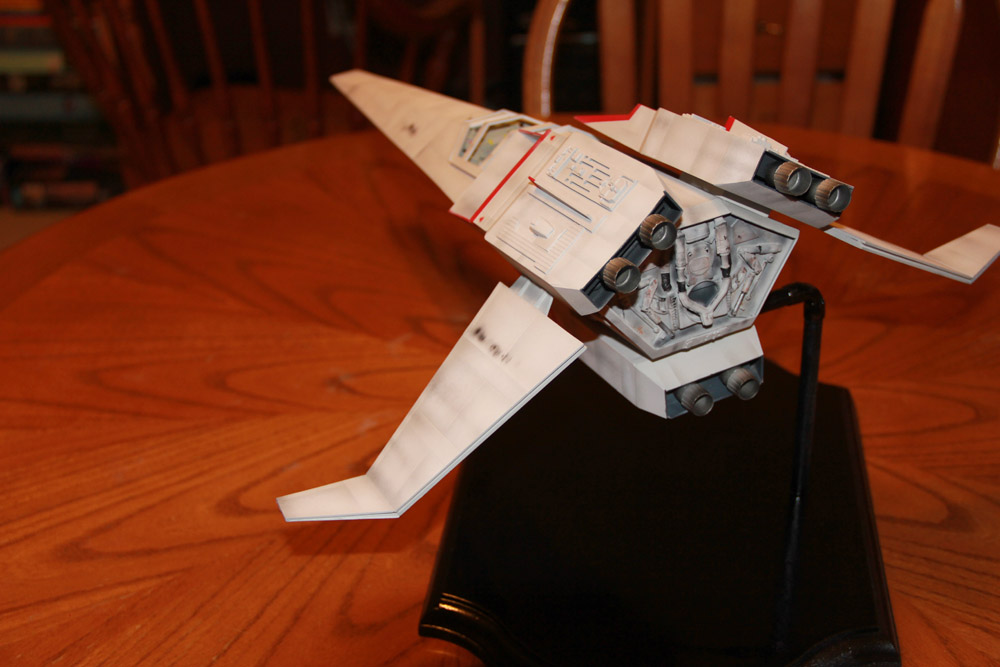 Very nice side view. Any other cool angles to show? I like the paintjob!

RPF PREMIUM MEMBER
cool build i always liked the design this lighted up would be great.