I had been collecting the shoes for some time and finally got around to painting them up.

and some Nikes to match the screen used ones.

I removed the pull tab from the back of the Nike's and filled in the swooshes with rubber.

I know the BSG threads are quiet lately but I was wondering if anyone has ever actually seen the screen used pilot shoes of the Nike Chosen style? If anyone bought some from Propworx or found an auction that shows the labels etc.

The reason I ask is that the screen used shoe, although looking very much like the Nike Chosen, it is not exactly the same as any Chosen I have ever found. The biggest thing is that there is not one 'swoosh' anywhere on the prop shoes used on the show which is not like Nike - every one of their shoes has the swoosh somewhere.

The back of the screen shoes on have no pull tab and have the letters AIR embossed into the leather where the Chosen has a huge plastic pull tab with MAX stamped on it. 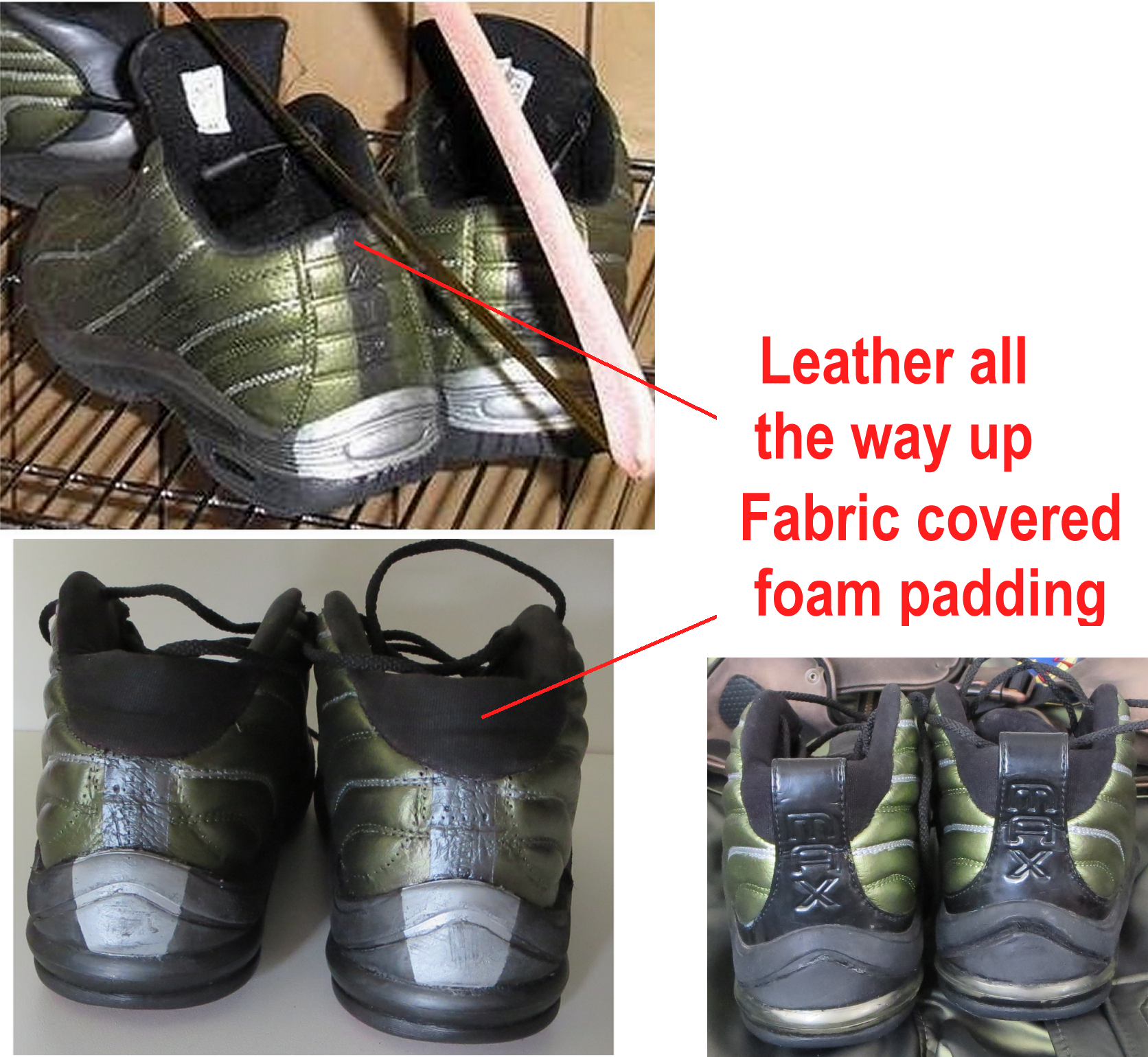 There is a glossy tab at the top of the tongue that says "SLAM" on the screen shoes but "MAX/AIR" on the Nikes.

Also at the bottom of the lace area the Chosen has a plastic strip with a swoosh on it which makes the laces stop before reaching the very bottom. The screen used ones go all the way to the end.

The soles of the Chosen also has "NIKE BASKETBALL" engraved into the sides as well as a large swoosh on the arch and another on the back of the heel. The screen shoes only have a triangular fan shaped mark on the front of the toe. And the design of both soles is completely different. I have never seen the sole used on the screen shoes on any of the (thousands?) of Nike pictures I have scrolled over in the last 5 years. 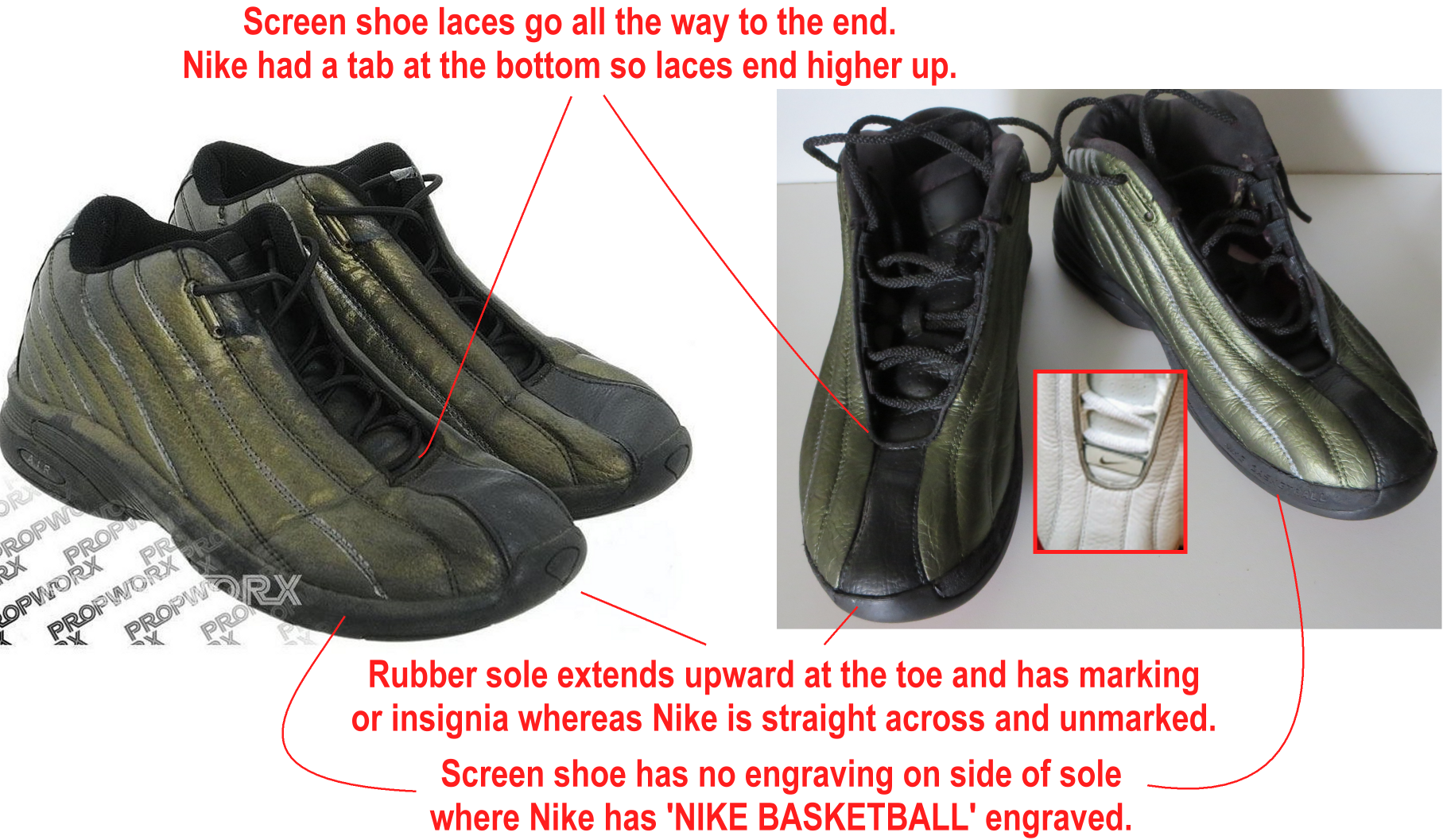 The profile of the ankle is different on both and there are a different number of ribbed areas separated by the stitching. 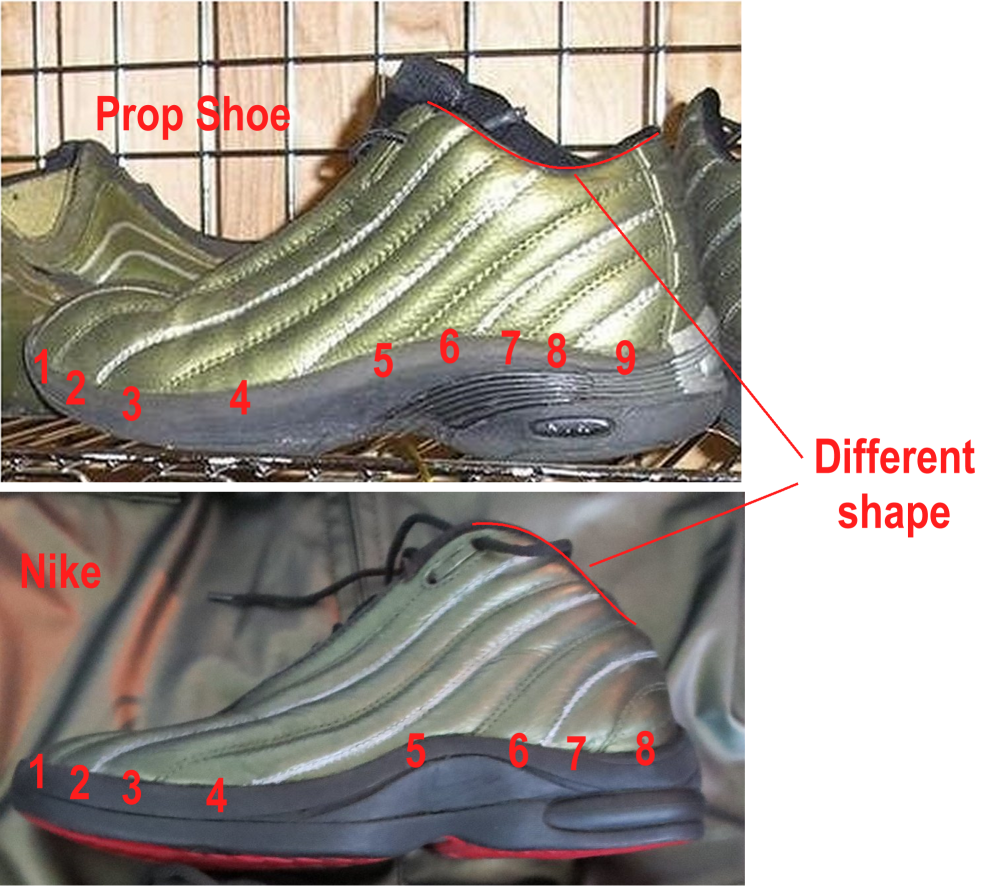 I have never been convinced the prop shoes were actually Nike Chosens and I found that back in the day there were several shoe companies that were making their own versions of the popular big name shoes. I found this model of the Attix Go2 and as the picture shows it has the exact same sole as the screen used shoes even down to the little oval insert. 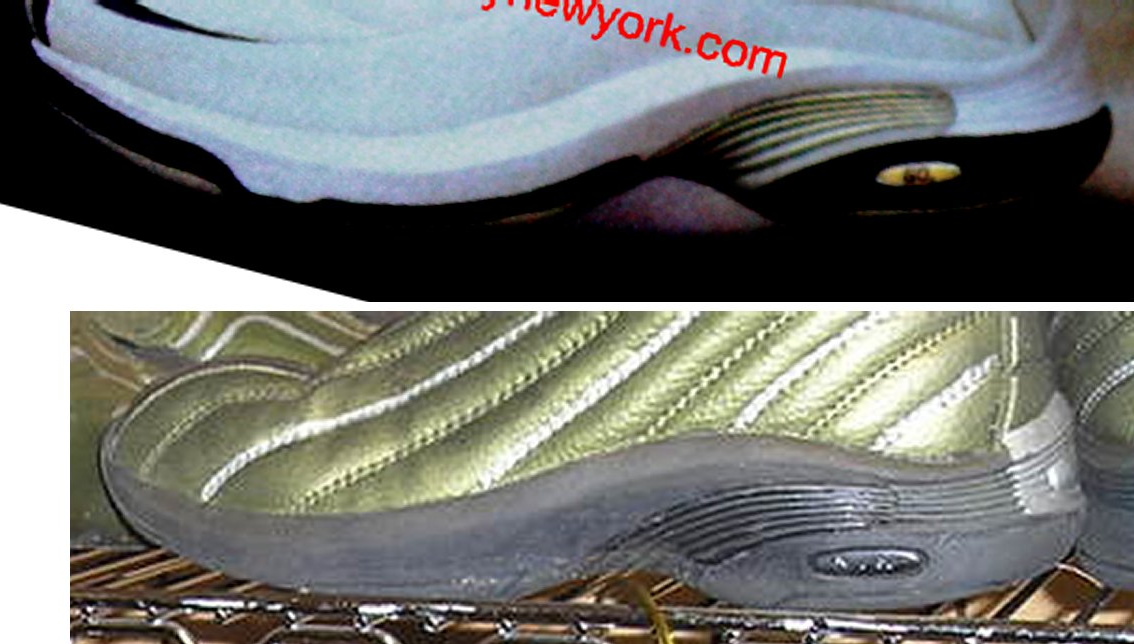 I figure that a lot of the discount and knock-off shoe makers sourced their outsoles from the same places so this style might show up on others but again it looks nothing like any Nike Air shoe sole I have seen.

Could it be that Attix made a Chosen look-a-like that was so similar that someone mistook the props to be Nike and ever since they have been misidentified?

That's why I would like to hear from someone with actual screen used shoes to see what the labels say or the insoles and better yet the tread pattern which might have some identifiers on them.
Last edited: Feb 11, 2020

JMO said:
I know the BSG threads are quiet lately
Click to expand...

Lets change that, I know a few of us have been on a nuBSG kick lately. I've read that there were quite a few different shoes used and several were cheap shoes from Pay Less. Also it could be possible production got there hands on a lot of knock offs.

Yes I agree. That's why I want to hear from someone with the actual screen used one that looks like the Chosen. Because the Chosen has been presumed to be the screen accurate shoe for a long time. I suspect that it was actually a knock off just like the Payless Cross Trekkers with the zipper up the front.

Air Max future flight were the shoes used in the viper suits.

Sorry but the screen used flightsuit shoes were not Nike Future Flights, they were Cross Trekkers 'FSHN Zip-Hi' which was a look-a-like or knock-off of the Future Flight design but the shoe is clearly different when viewed side by side. Most notably no Nike swoosh symbols anywhere as seen here...

They were seen on pretty much all the main characters except for Sam Anders. He had a different pair of Cross Trekkers which look like a knock-off of a pair of Shaqs' amongst others that were quite similar. The Cross Trekkers though have all the matching details...

There were other shoes that were auctioned off by Propworx as worn by background flightsuit shoes...

The middle ones were confirmed as AND1 Drop Step (you can see the AND1 logos on the screen used shoes) the ones on the right were made by Projekt and you can see the "P" logo on the side of the screen used shoe. The other most commonly seen were the ones on the left which have historically been said are Nike Chosen. This is one that I still don't believe is the Nike. They look a lot like a Chosen but there are way too many stylilng cues that are different or missing, again the swoosh being the most notable. I detailed all the points that do not match up with the Chosen earlier in this thread. So until someone in possession of an actual screen used shoe that can show me the Nike markings on it I will keep hunting.

Back to the Future Props Starter Pack