This is my first post and my first prop build. I’ve been a maker most of my life. I’m a hobby machinist so used to making mechanical parts. It is nice to make something where the dimensions are not all that critical.

The project started last September after watching Adam Savage’s show and tell on the lightsaber hilt that he built back in his ILM days. After a bit of searching I found a drawing for Luke’s Return of the Jedi lightsaber. I found two pieces of 2” 6061 aluminum on eBay (only $20 shipped!).

My aluminum arrived in about a week (back when the post office worked) and promptly went under my work bench. Life and some of my other projects had priority until just after Christmas. A trip to Galaxy’s Edge over New Years and seeing Adam’s new lightsaber build lit the fire again.

My first step was to redraw the plans full size and convert from metric. I don’t necessarily have a fondness for either system I just work with the tooling I have. I also wanted to dimension it to be more in line with how I planned my build. After a couple of hours I had a new set of drawings.

I’ve since done a bit more research and found out that the plans I copied are slightly small compared to the original prop. It’s not enough of a difference to really bother me so I decided to stay the course. At some point I may revisit the design for more accuracy with that second piece of aluminum.

After about 14 hours of machining this is what I have. I'll be happy to post some machining shots and more info if anyone is interested. 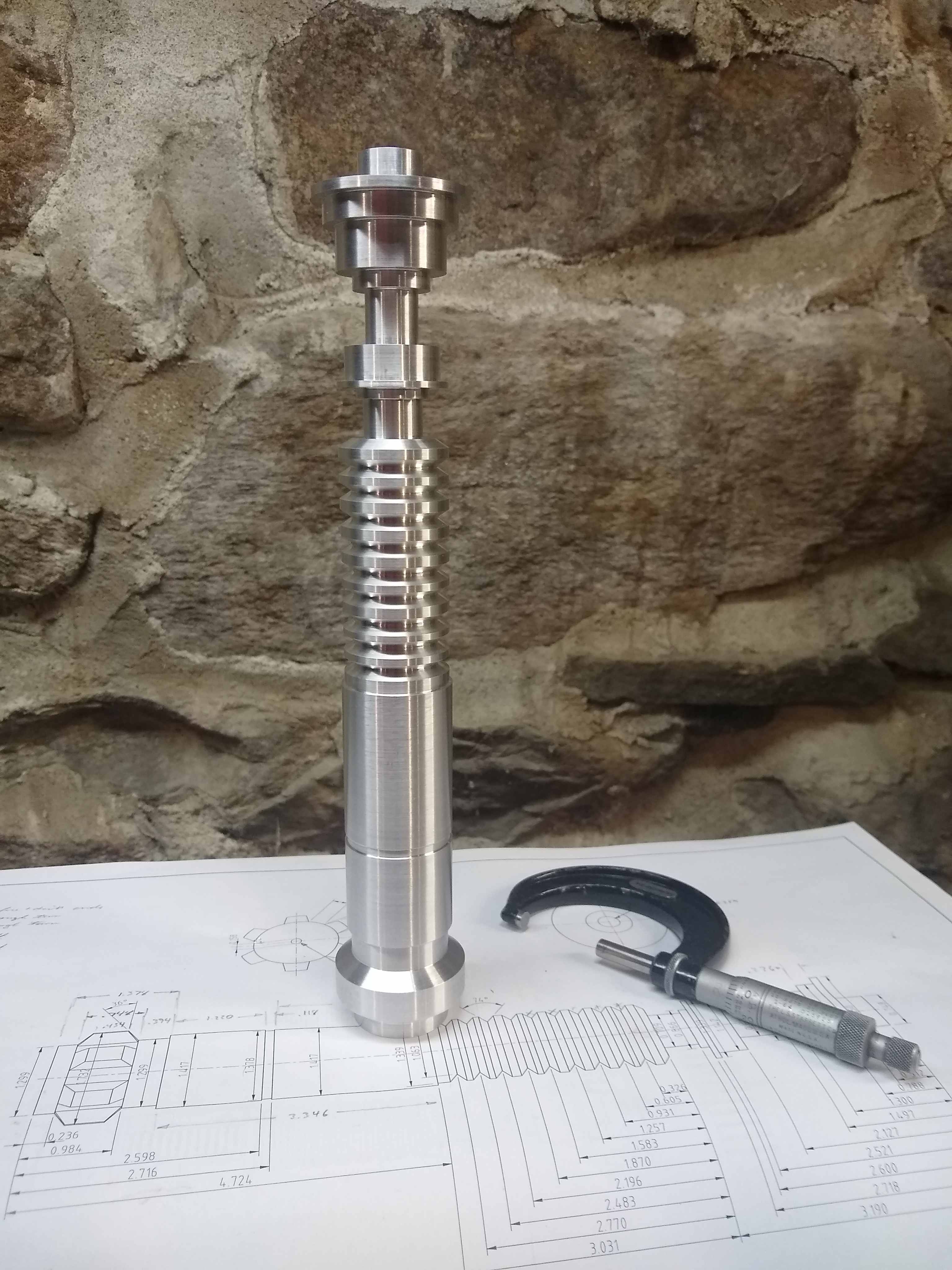 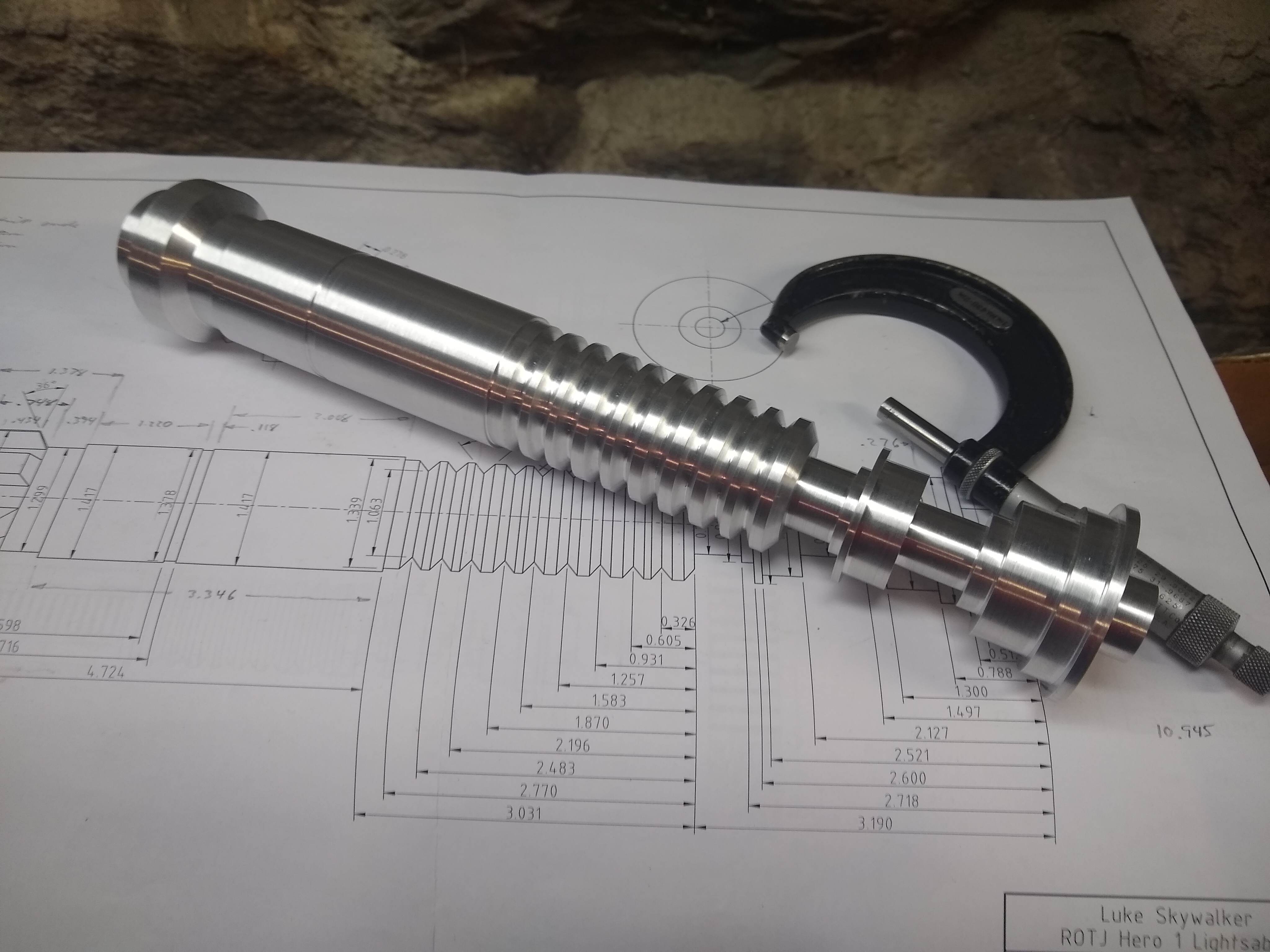 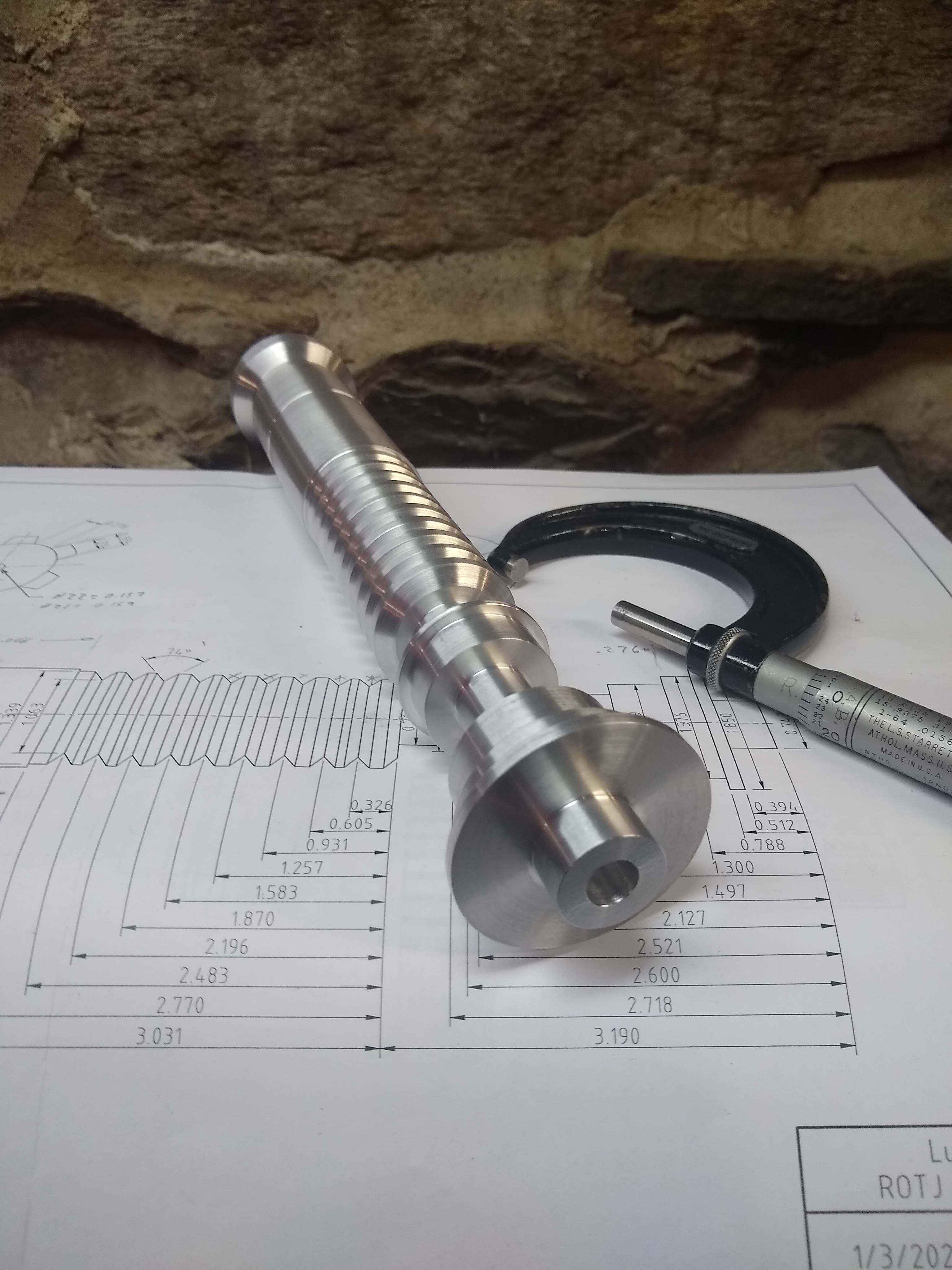 It took much longer than I had expected but overall I’m pretty happy with how it came out up to this point. I’m more used to working with steel so the 6061 was pleasure to machine for a change.

The only thing that gave a bit of trouble with was the groves. Trying to plunge in to the full depth resulted in a lot of chatter. I ended up scribing the extents of the grove then machining out the center with shallower cuts. Since a lot of the work was by eye my grooves ended up with more variation than I would have liked but they look okay.

I still need to machine the lugs. I’m not 100% sure how I’m going to do this but I’ve got some ideas. It will probably involve making a form tool of some kind.

The control box looks fairly strait forward but not necessarily a small amount of work. I may hold off for a little bit until I decide how deep I want to go in this build.

The D-ring shouldn't be hard to make either. I'll need to put a quick jig together to get it symmetric.

So far I’m pretty happy with how it turned out.

I had considered the exact same exercise (several versions of the drawings are on my desk right now!). I had planned to re-draw into a software I use so I could better see the relationships (and to convert to inches, as you have done).

My issue with the drawings is they are to a half-millimeter resolution, on some dimensions. That'll add up over the entire length, so I wanted to see it re-drawn to please my eye first.

ANYWAY, I found (during my trolling prior to signing up) that Roman Props owns the replica of the Obi-Wan episode 4 saber (by replicating each component that goes into it!). So, I'm planning to get in on the (raw machined version) pre-order. I have that drawing too, but had planed to do this one first, because it is a bit simpler. Materials, plus 14 hours (which will increase to finish the sink knob) say 20 hours... That's $1,200 in my labor alone, so...

If you have a dividing head, I think you can do the faucet handle without too much trouble. But Roman's sells those handles alone too, so you consider buying that part (either to install, or to reverse-engineer).

Great effort despite all that commentary! I respect what you've made because I know exactly what every step takes.

(for the grooves, I'd try a single-point threading insert, running at very low speed, and plunge them. Also, the tool and die maker who taught me suggested Acetone as a cutting fluid for Aluminum, although I often cut it dry, or use Rigid brand "dark" thread cutting oil.)
J

Thanks for the encouragement.

I learned a long time ago not to equate my time with money on projects like this. I know exactly what you are saying though. If I were smart I would just get a part time job and buy the things I want. For me it is the making of the thing that is enjoyable. There is someone I follow who calls projects like this “delightful little puzzles”.

I used a high speed steel threading tool I had ground a while back. The end result is okay for something decorative but I don’t know if I would rely on it for mating parts.

I have had fairly good luck with Neatsfoot Oil for cutting aluminum. I originally got it for conditioning the flat belt on my lathe but found out it could be used for cutting oil. It works fairly well.

I was fairly surprised that the dimensions worked out as well as they did. I’m sure the dimensions for that drawing were rounded to the nearest mm. When I was just starting out I would try to make dimensions land on an even number. Finally someone told me not to bother. It is just a number to hit. Trying to hit 1.000 is not any different than 0.988. In this case I would have rather had the real number.

No new work on the lightsaber. I've got a couple of other projects that have needed attention. I'm hoping to get back on it soon though.

I've shifted to making a unique one from found/bought/made parts. Same fun; lower cost. If it IS fun, I may make more, but each one will be a bit different (unless I hit a really cool "formula" people like).

I work with Plasma guns so I have some cool parts to use. Check my one thread I made on that if you like...
J

One of my other hobbies is building a 1/8 scale steam locomotive. There is quite a lot of stuff available but for the most part if you want something you have to make it yourself. There are very few parts that are not at least modified in some way. Right now I’m about 25 years into the 3 year project.

I have considered adding Han’s blaster as a “someday” project. I have a lot of those already though. My problem is I tend to get drawn to multiyear projects. I’m fighting the urge to build a R2 unit now. So far I’m winning but it is only because I’m considering building a mouse droid instead.
J

I decided to pick up this project again and finally tackle maching the lugs. I don't have a dividing head so I improvised using a CAD print out attached to the end. There were a few un-planned battle scars but otherwise it worked out pretty well. 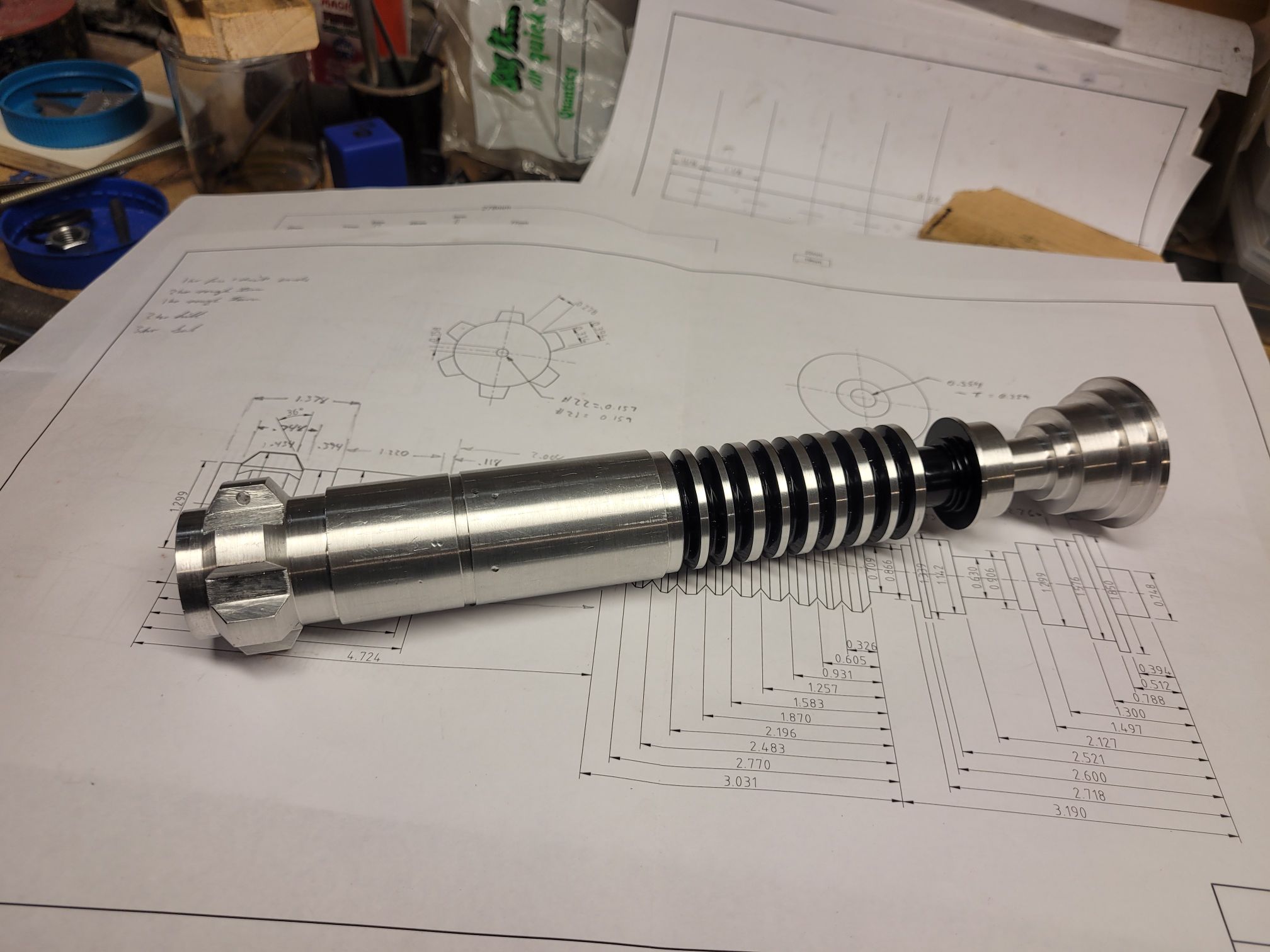 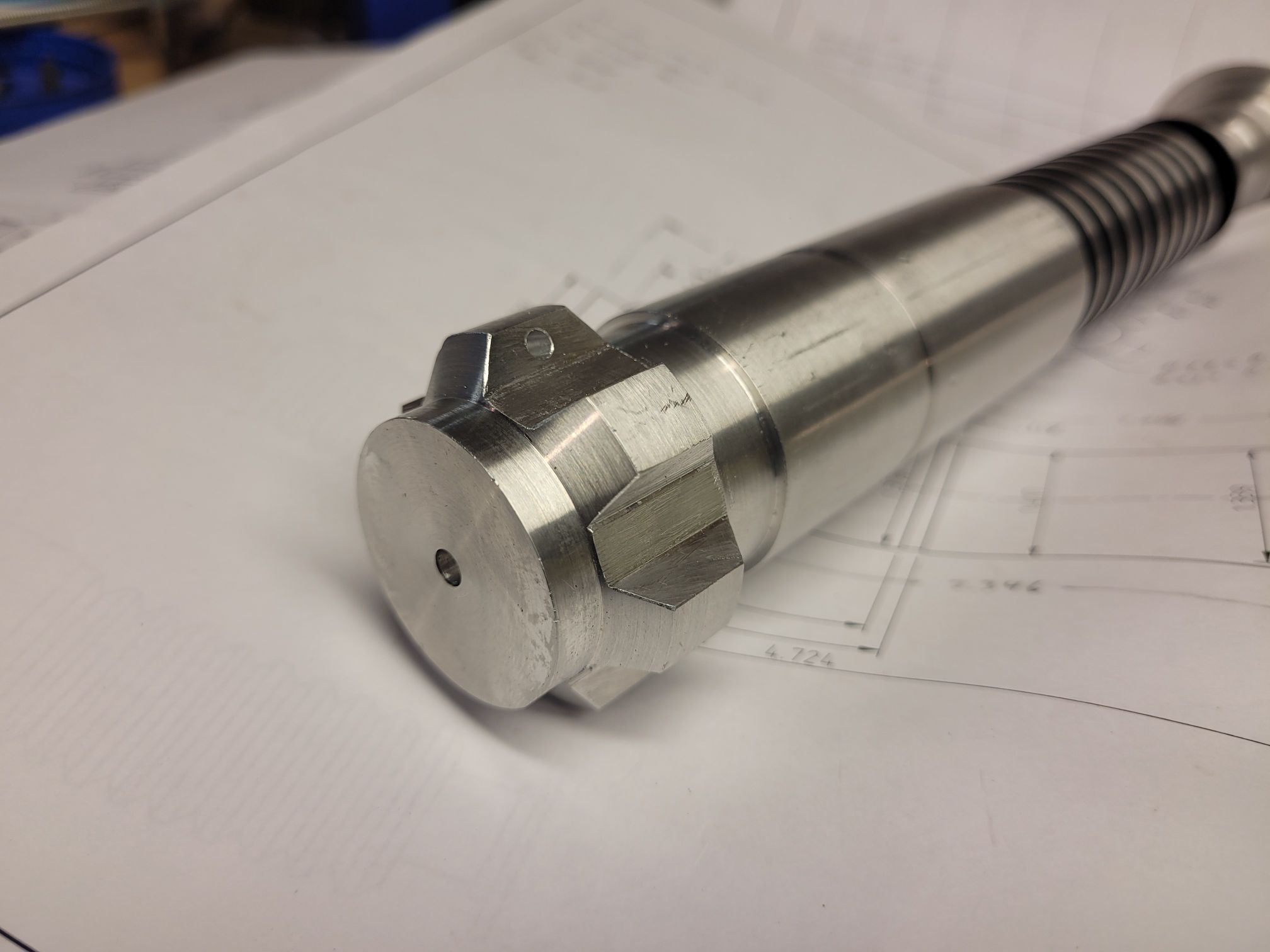 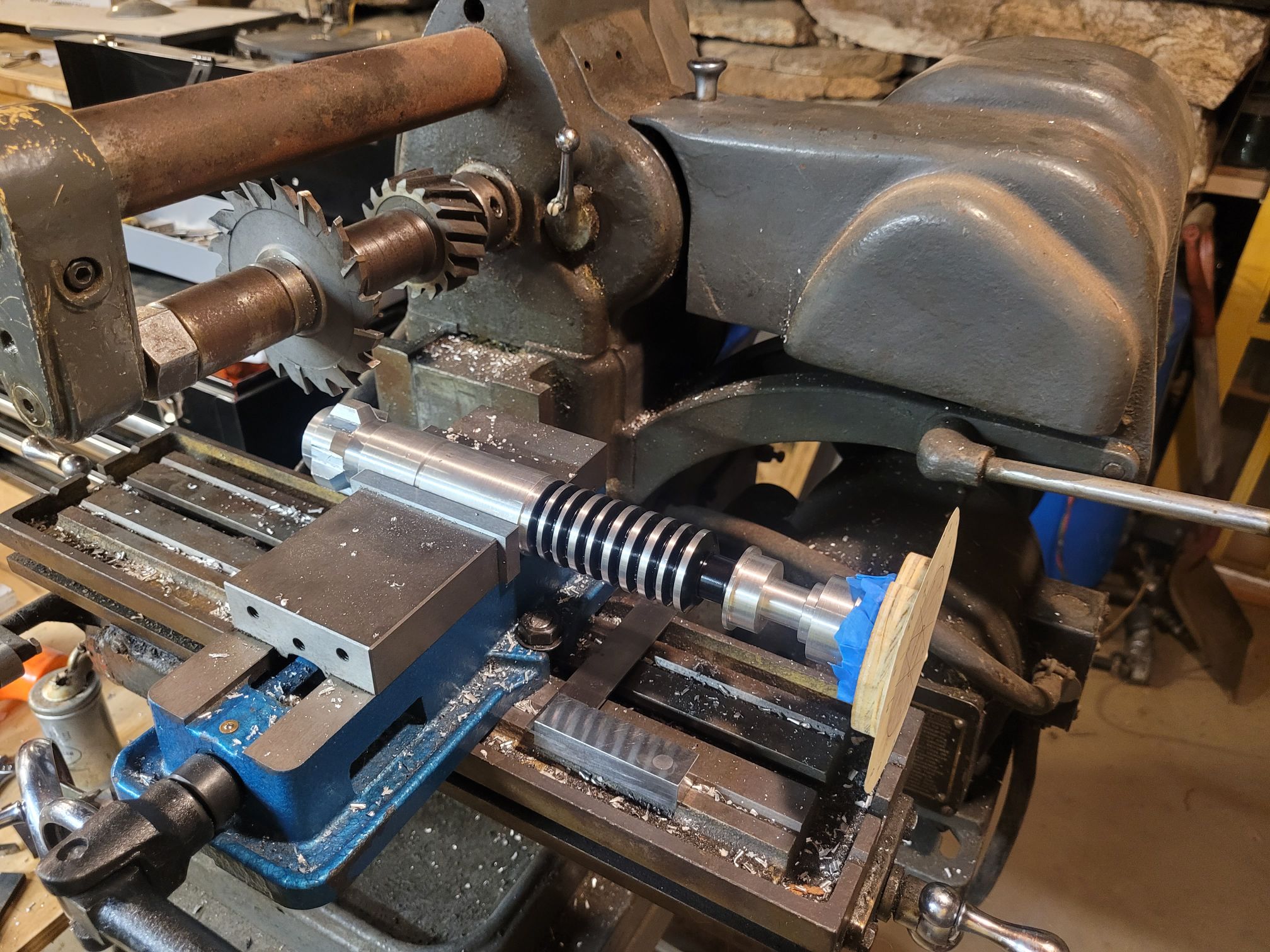 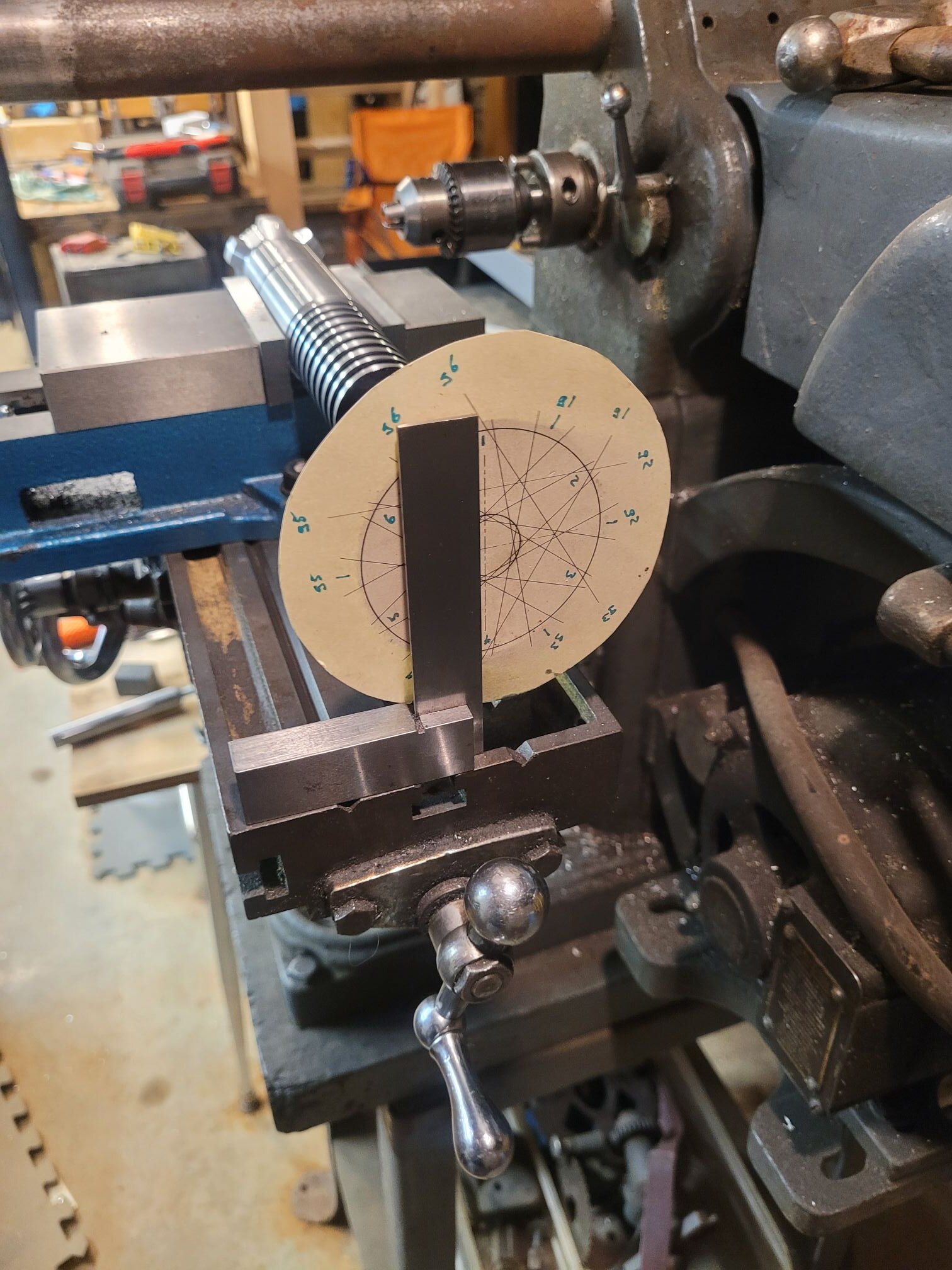 jeanluc83 said:
I decided to pick up this project again and finally tackle maching the lugs. I don't have a dividing head so I improvised using a CAD print out attached to the end. There were a few un-planned battle scars but otherwise it worked out pretty well.

Awesome work! I wish I had the access to equipment and the know how to machine my own parts! I envy those that do. Looking forward to more progress pics!
J

Pretty much all of my tools are hand-me-downs or used. If you keep your eyes out you can find deals. As far as know how, you just need to start doing. There's lots of great resources out there to learn from.

Here are some more in process pics: 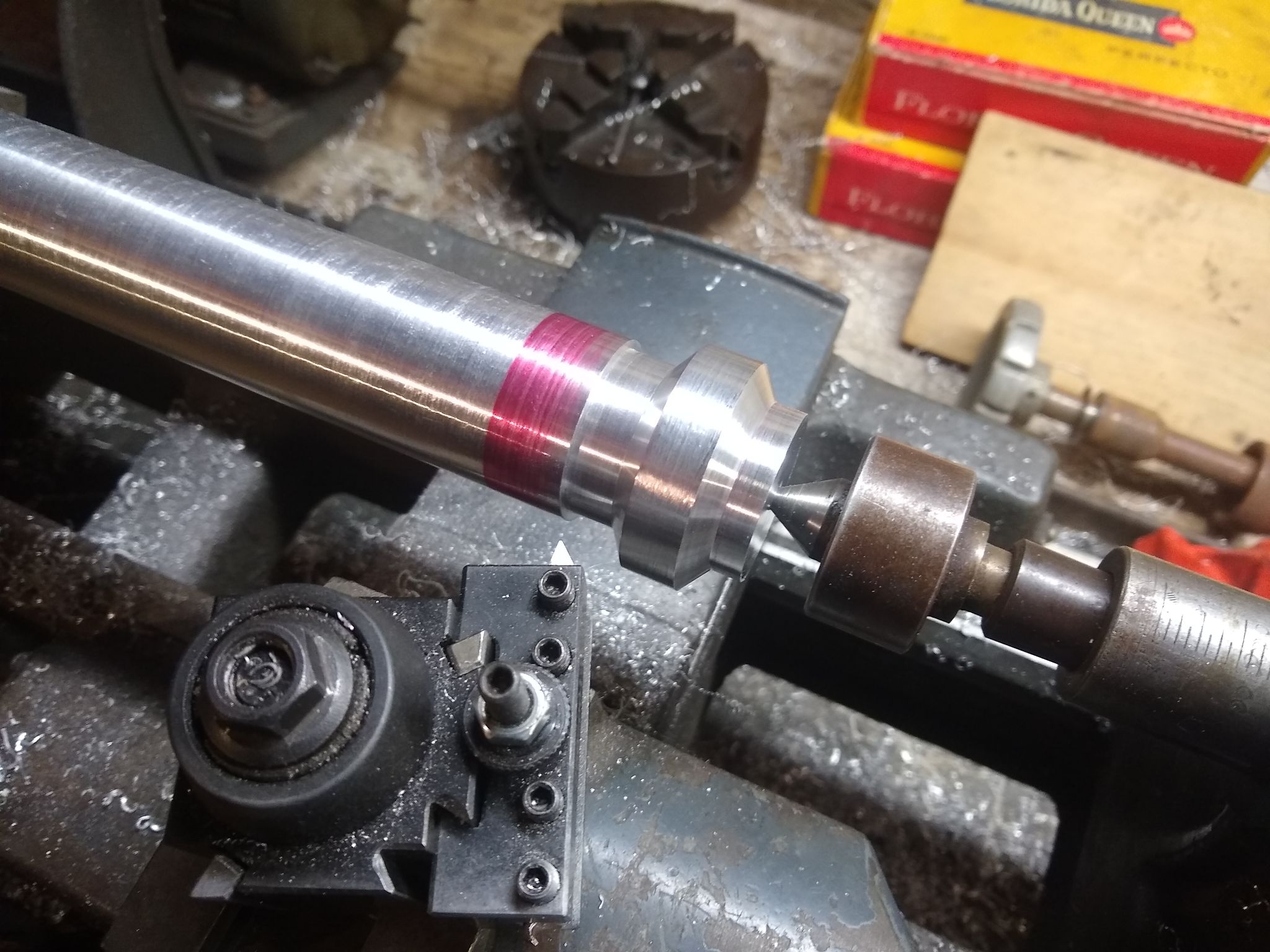 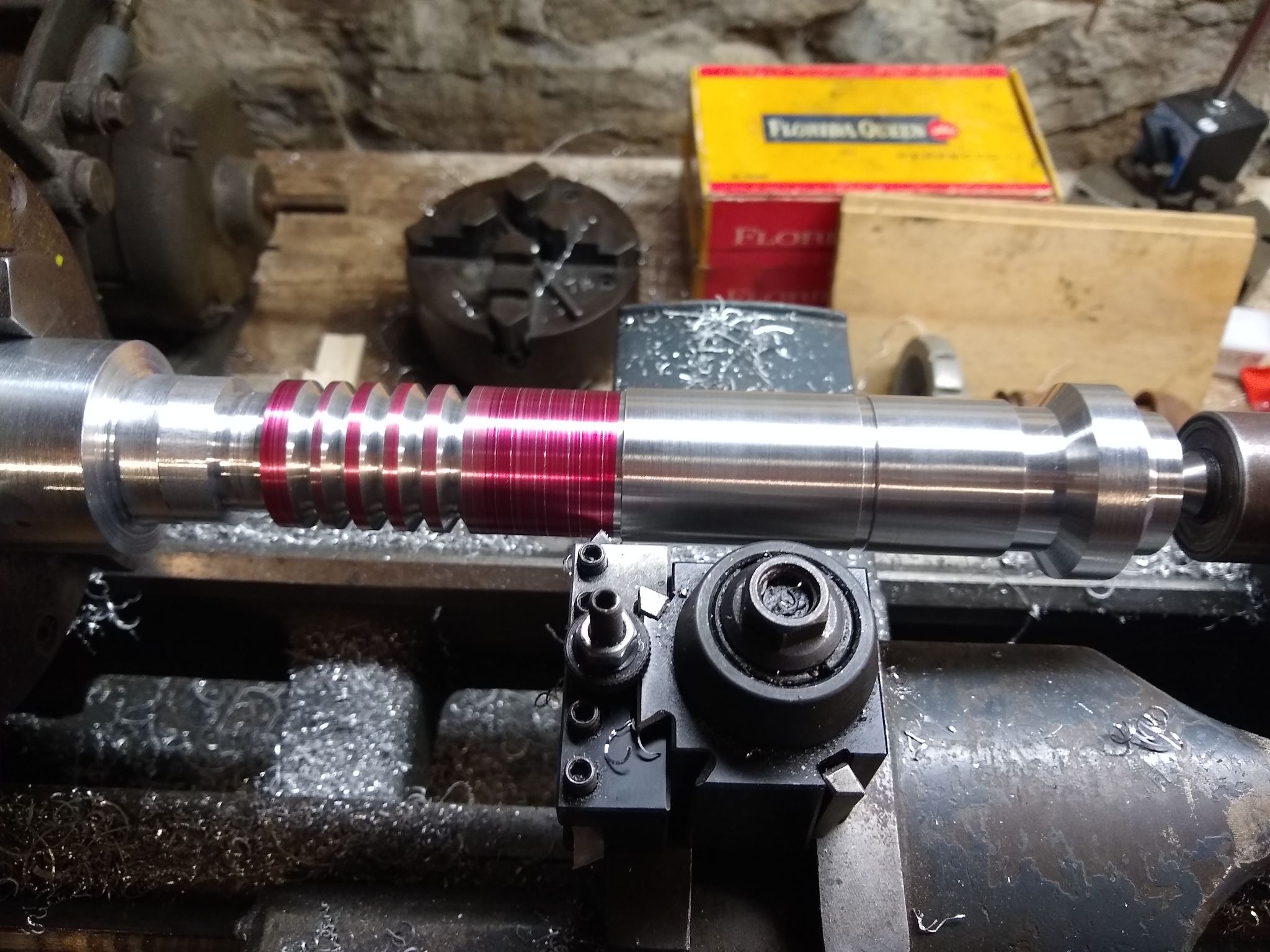 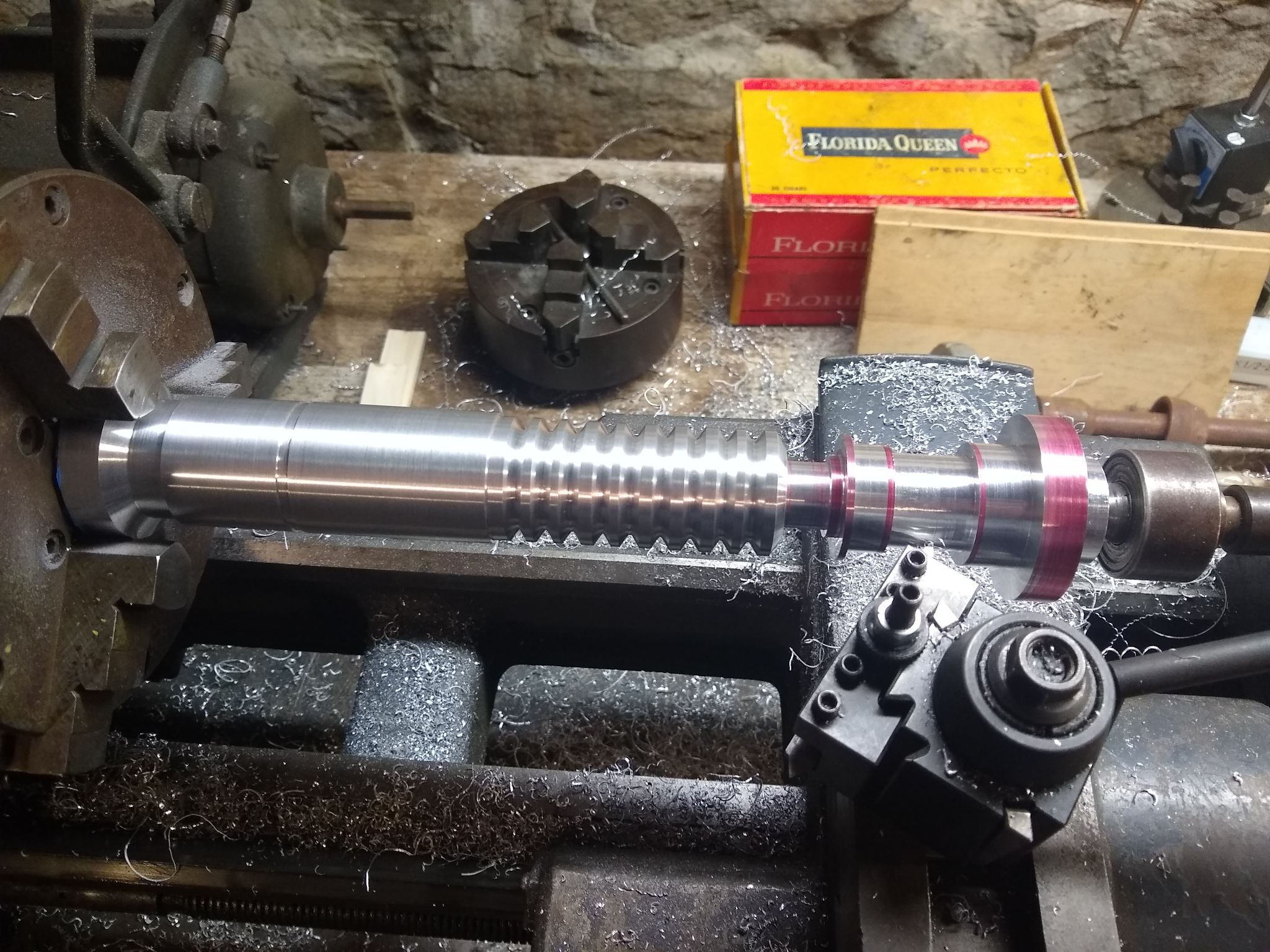 This is what it started as: 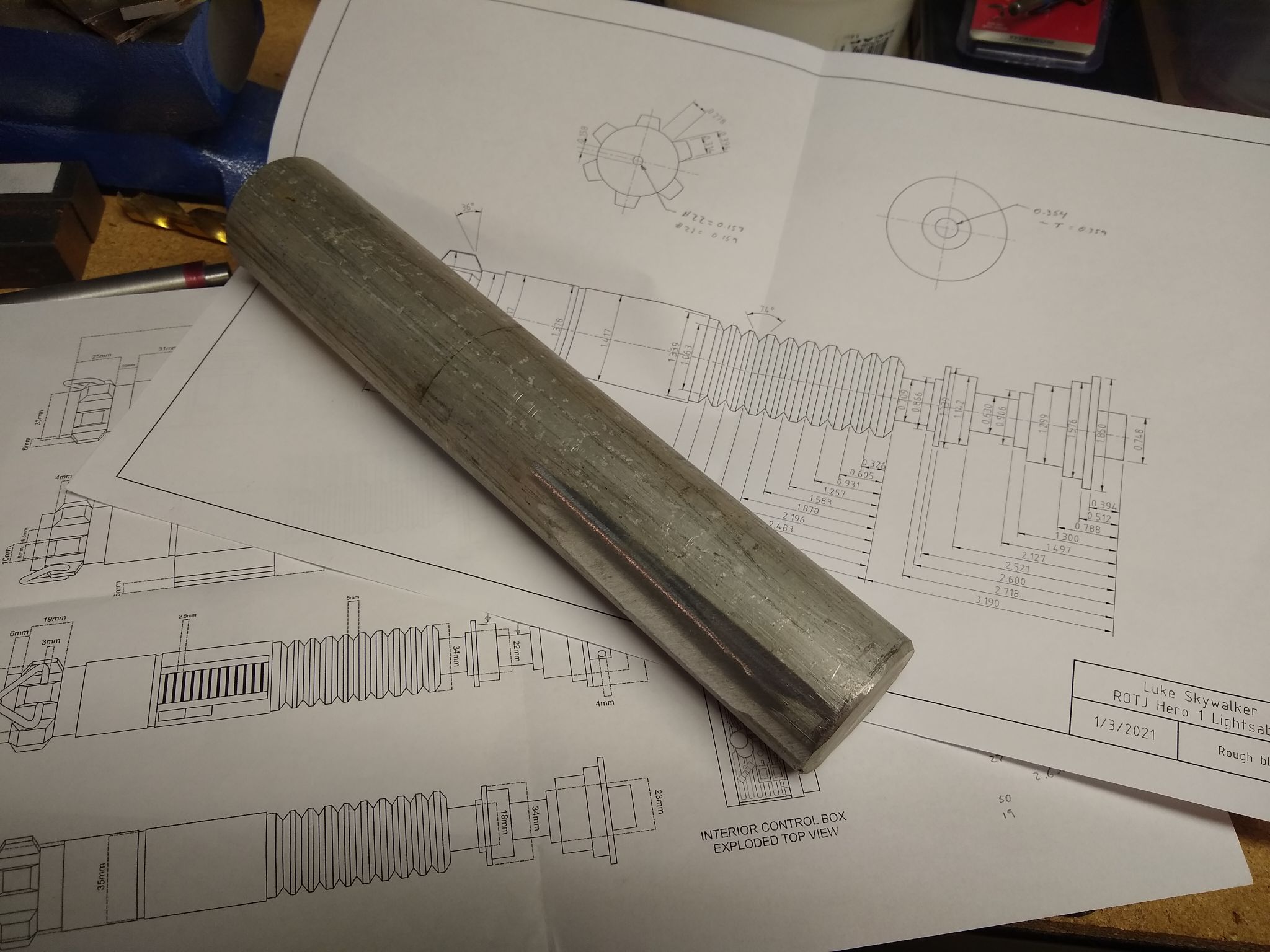 More progress. I got the flat milled for the controll box. I'm pretty happy with the fit up. 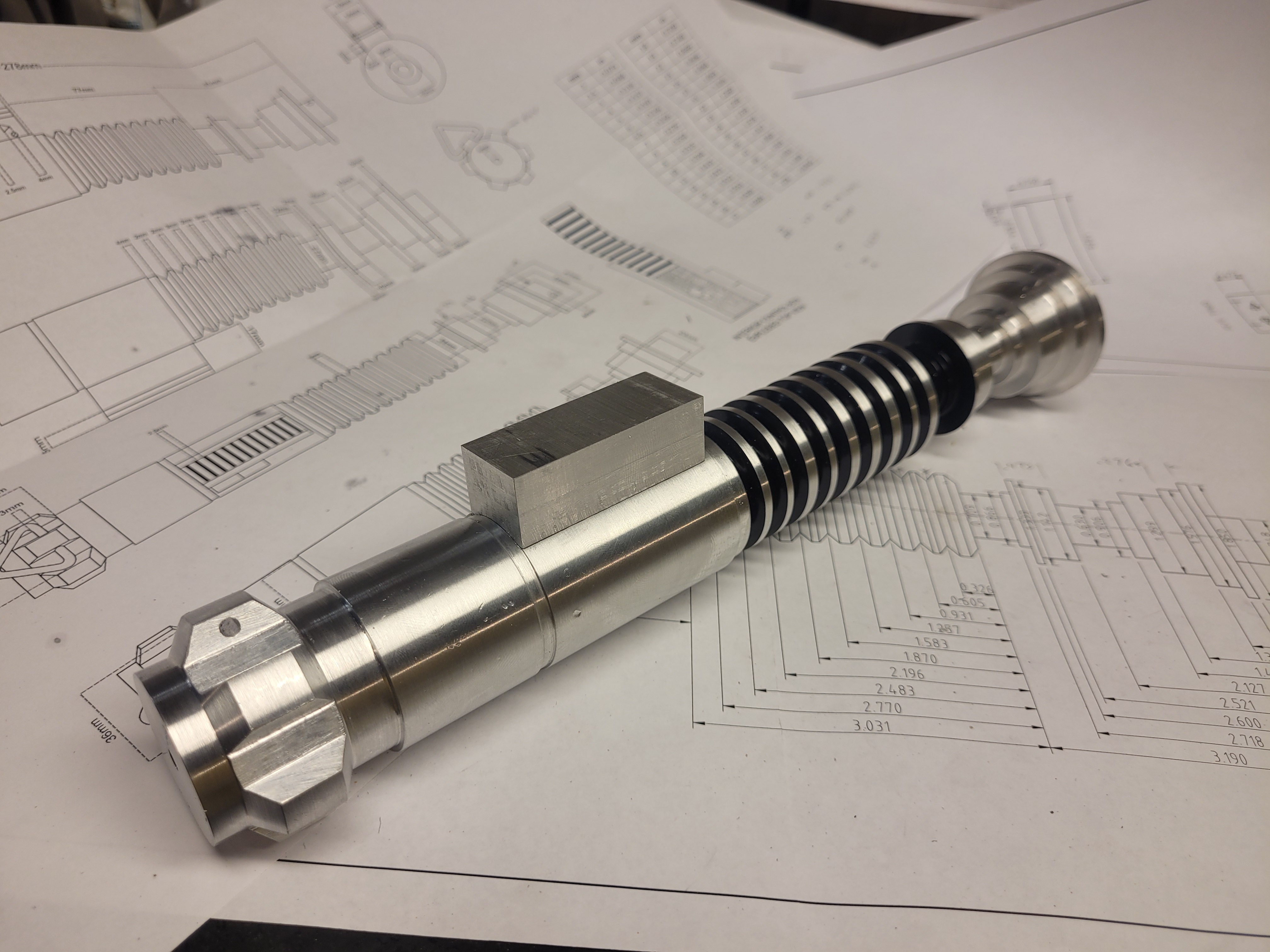 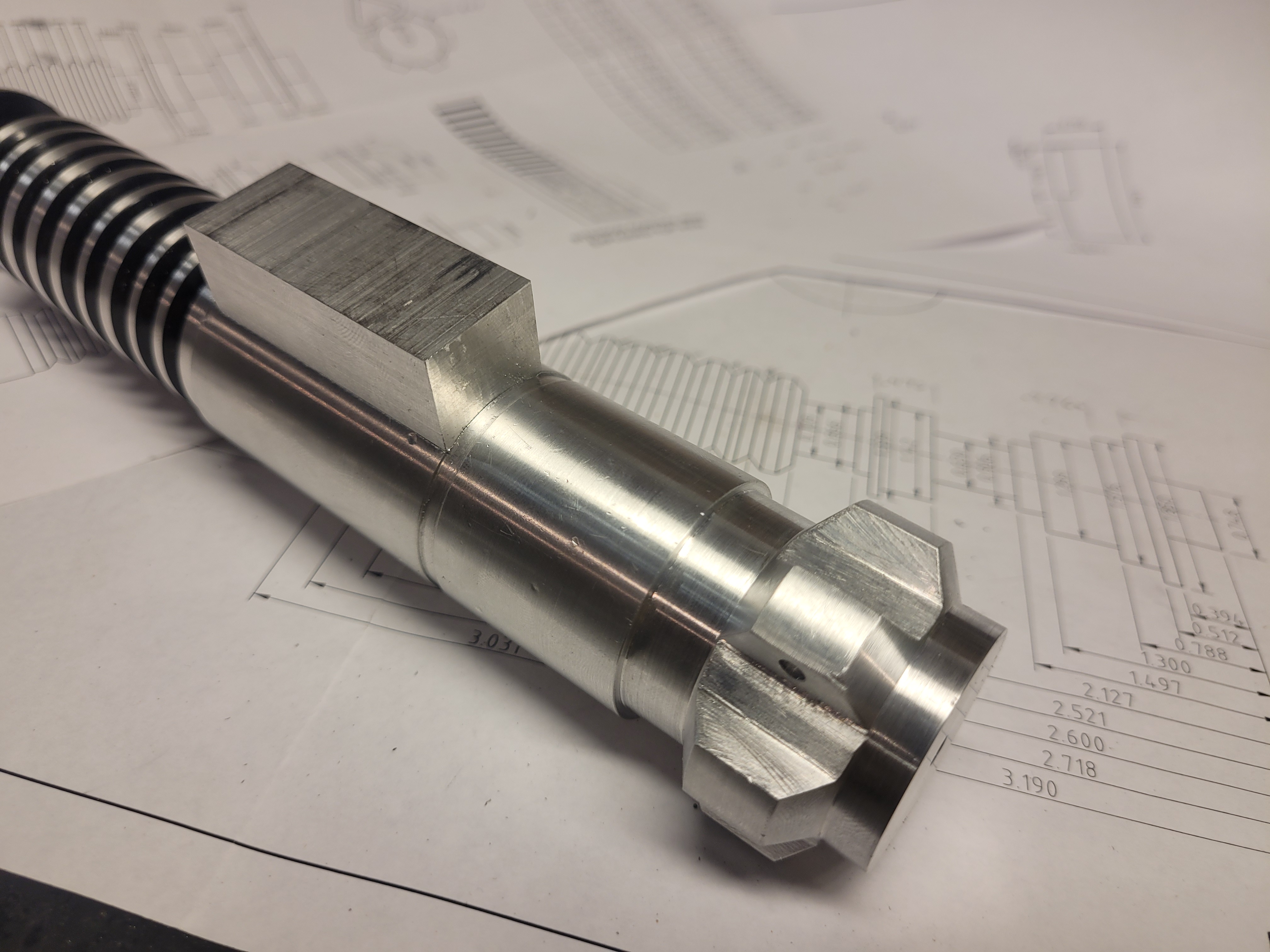 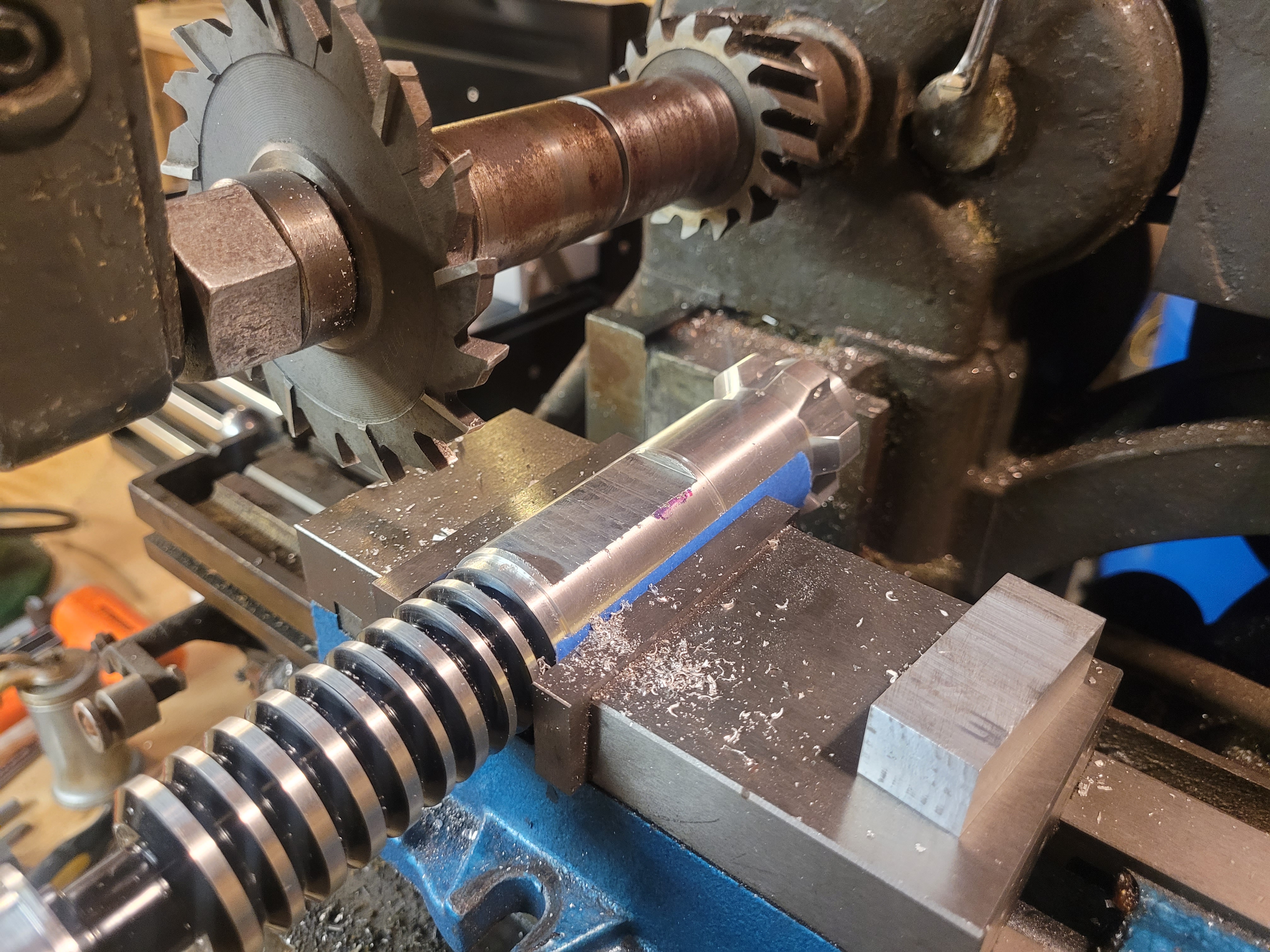 This is gonna be swell! For reasons I do not know I love aluminum. And especially when machined into lighsabers and prop parts! Keep up the good work!
J

Cadger said:
This is gonna be swell! For reasons I do not know I love aluminum. And especially when machined into lighsabers and prop parts! Keep up the good work!
Click to expand...

Thanks. I'm really happy with how it is turning out. Most of the time I'm machining steel so the aluminum is a nice change.

My 2 cents - if you want to really take this replica to the next level - Luke's saber also functioned as a stunt. If you bore a few inches deeper, you can run the set screws through the nipple and under the emitter lip and pinch a steel tang in there. Run that up to any blade you like... Glomex antenna would be my suggestion.... and you've got a stunt saber!
J

I already added the set screw. It was only after I had drilled the end that it dawned on me what it was there for. I'm probably about an inch deep so I may need to go a bit deeper.