Hey folks, I've been itching to do some more sculpting and thought I might take on an ongoing project and try my hand at the Holochess figures. I know a couple of these have been done here in the past, but It seems like there were still a few figures that were never completed.

I plan on sculpting the whole set, painting. and casting them, and figured I'd start this thread to post my progress. I've roughed out a few of them over the past couple days to try and get the scaling of each piece correct, but I'm focusing on the ones I haven't seen done before.

Here's the "M'onnok" who I started working on two days ago, but still have a ways to go.

I had to get a bit creative in order to get him prepped for eventual casting, and ended up separating him into eight parts:


I'll be posting more as the project progresses. Thanks for looking - Any comments or research any of you might have is more than welcome. I have what's on the Blu-Ray set, and the Star Wars Chronicles book, but haven't found much else.

Here are their names for reference while reading this thread (and so you can feel like an über nerd when you know all the names of the Dejarik pieces):

This is so cool! Great looking sculpts, I would love to have a set of these. Looking forward to more pics.

Yes, yes, yes! As an owner of all 5 sculpts that HAVE been done so far I'd love to get a cast of the missing three! And your sculpts are looking great. Sculpting a Galaxy has one pic - it's a big, double page spread photo of the image that is already shown at the bottom of the left hand page in Chronicles that you have in the background there. Can photograph it if it's any good?

I KNOW that I saw a photo or video that was posted online within the past month or 2 that was a famous director being interviewed and he had the two original chess pieces in question in a display cabinet behind him. I want to say Del Toro, but I'm really can't remember exactly who it was.

Hope these may be of help: 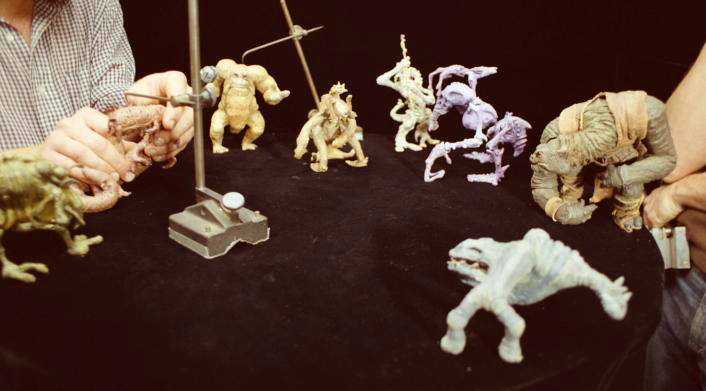 Wow Howlrunner, those pictures are great! I've already printed a couple out to add to my reference pile.

The group photo from Chronicles, and I imagine Sculpting a Galaxy Is the same shot I found on the Bonus disc on the Blu-Ray in one of ANH's "Collection" sections, it has some more great detail shots, and a "360" view as well. I imagine I'll tackle those four last.

The M'onnok is pretty much done - I'm curious if he will fit proportionately with the finished figures you have? He stands about 6" tall, around 8" if you count his raised arm & staff.

I'm starting now on the "Ng'ok"

The last image is posted is good because it's the only image I've ever come across that actually shows the K'lor'slug's face. That image was not available when the replicas that were sculpted many years ago were done and so some artistic license had to be taken on what the slug's face should look like. Consequently, the slug figure I have has four eyes and is not as accurate as a new sculpt could be.

The Kintan Strider I have is 4 inches tall and the Mantellian Savrip is 5 1/4 inches. The Kintan Strider and M'onnok look the same size to me in the Tippett photos. And the middle image I posted shows the Strider to be about palm width (from forefinger knuckle to pinkie knuckle) - which on me is about 4 inches. So I'd say 6 inches is probably too big. Looking at the vid again that you posted with your hand compared to the figure, and compare that with Tippett's hand compared to the figure and I'd say that yours are too large.
Last edited: Jan 11, 2015

I agree, that last photo is really awesome for better understanding the K'lor'slug face. I will say though, that there are some great clear shots of his face in the film as well:

I'm really bummed that it looks like my figures will not match in scale to the old ones some members already have. However, I'm pretty confident that my proportions are accurate, and I think by sculpting a complete set, they will complement each other well.

I think the perspective in some of the above reference can do some funny things. For instance notice how big the Mantellian Savrip looks in the second shot, and then how small he looks in the third. Or look at the Ng'ok compared to Grimtaash in the first photo, and then look how much smaller the Ng'ok seems in the second. Some of the best scale reference will come from the film, and the detail shots in the books.

Here is a demonstration of the 6" size for the Kintan Strider and M'onnok. Meet "Koton Strodor", my 30 Second version of the Strider.

I know he's not even close, but i think he's a good size reference. I did my best to take a similar photo to the third picture you provided:

I think it looks about right. And when he's put next to my M'onnok - I think they look accurately proportionate to each other.

I'm not sure its possible to ever really get the scale right, without seeing each of the originals from the movie next to a ruler... But I'm happy with what I have so far, and I think if I scaled them down any further, I wouldn't be happy with it.
Last edited: Feb 8, 2015

This is very neat. Good luck!

Came across this screen cap today (which I assume is from the Blu Ray). You're right, there's a lot more reference available now (like of the Slug's face) than there was when the replicas were sculpted many years ago.

I took another look at the replicas I own, and I agree now that your scale should be right. The Strider and Savrip I have (and measured) were sculpted by Mr Barlow, but are actually a smaller scale than the Hgggk, Houjix and Slug I have that were sculpted by SouthReplicas (now banned). The Hgggk I have is 4 1/2 inches tall, which is actually taller than my Strider - which is not right at all. I think the 3 SR figures I have, being a larger scale, would fit with your scale much better.

On a related note, from looking at the dejarik screen cap I discovered that I own a prop that I never knew I had! I bought this olive grabber from a charity shop a few years ago because I thought it looked kind of cool. And lo! R2 uses it to play chess! lol

Sorry this update has taken so long to get here. I've been very busy with this little guy, and It has taken me a bit more time to get this far than I care to admit :rolleyes - This is my first maquette, so the molding/casting phase was a pretty big learning curve for me, I'm not used to working with molds this tiny. Lukily, I've got it all figured out and am happy with the results.

It took twelve molds to make this guy - Looking back there are some ways I could have simplified things, but the head was a very complicated piece and it took a fair bit of thought to figure out how I would be able to cast it. I think he will end up being the most complicated of the figures in that regard.

Anyway, all that to say I've pretty much got it down now, and the others should be a breeze (fingers crossed).

Hopefully those watching are happy with my rendition.

I will be casting, assembling and painting 15 of these. 5 of them will be available in the next week or two in the junkyard, for those of you that just want a one-off. The others I'll be saving for complete sets (hopefully I'll get that far!). I do not plan on offering these in 'kit' form. They will only be offered complete and painted.

This is a really cool project, and I'm pretty motivated to do them all but It will take a good while I'm sure, as I'm only one man.
Last edited: Feb 17, 2015

How cool is this thread. Great work wish I had room for a board and these guys in my little room.
Very Jealous !

Wow ... I'm quite content to see these lovely 'holochess' creatures come to life with such great compassion for the original animation figures I hope I can afford these when the full set is done :wacko

So cool, can't wait till your set is done!

The "M'onnok" is available by himself now on the Project Runs forum: http://www.therpf.com/f75/holochess-dejarik-chess-piece-monnok-234864/ - Take a look.

Next up is the "Ng'ok", but first I'll be taking a detour and completing another project, another Salacious Crumb puppet, before Celebration in April (Hope to see some of you there!)
Last edited: Mar 2, 2015

The Ng'ok sculpt is coming along!

Wonderful sculpt, you are doing a great job on these.