Hello my fellow hutners, it has been a while since I have posted any new progress pics of my budget build but I definitly have been busy putting it all together. And now I can finally say it is completed at least for this year, this build has come along way from what it was last year and is basically nothing like it at all. Last year I bought the Mr black rubies costume and didnt really give myself enough time to really make it anything too special and truthfully I personally thought it could of been better but the time and ideas werent there. As a matter of fact I believe I was not even a member yet, most of the ideas came from google searches, But once I finally became a member I knew I finally had all the resources and ideas from all of you to make this something I could be happy about and now I definitly am. And because I am a budget builder like a lot of you, this community gave me tons of ideas of how I could save money and still make a decent pred suit and I thank all of you for that, and I will def give corey (termokk) a big thanks for the bio which I think really makes the costume. All in all I would say this build cost about 300.00 the original suit and bio were where most of the money went and rest on all the odd ball stuff like paint, foamies, glue, velcro, backer rod and so on, but ill shut my mouth now and give you some pics. 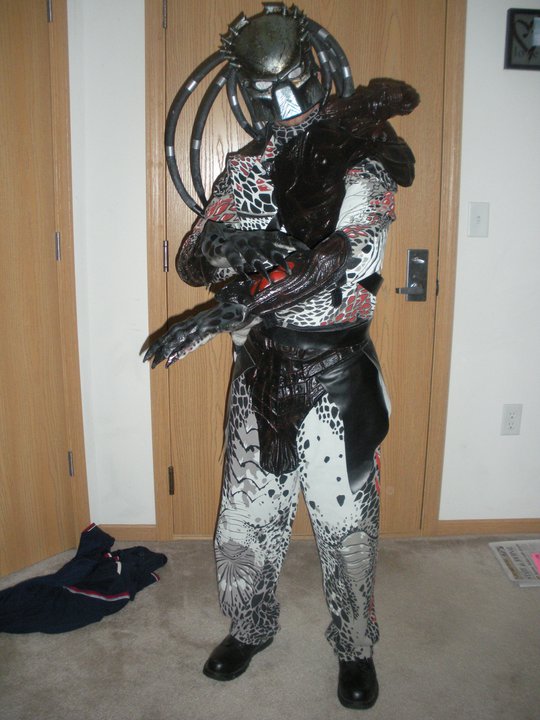 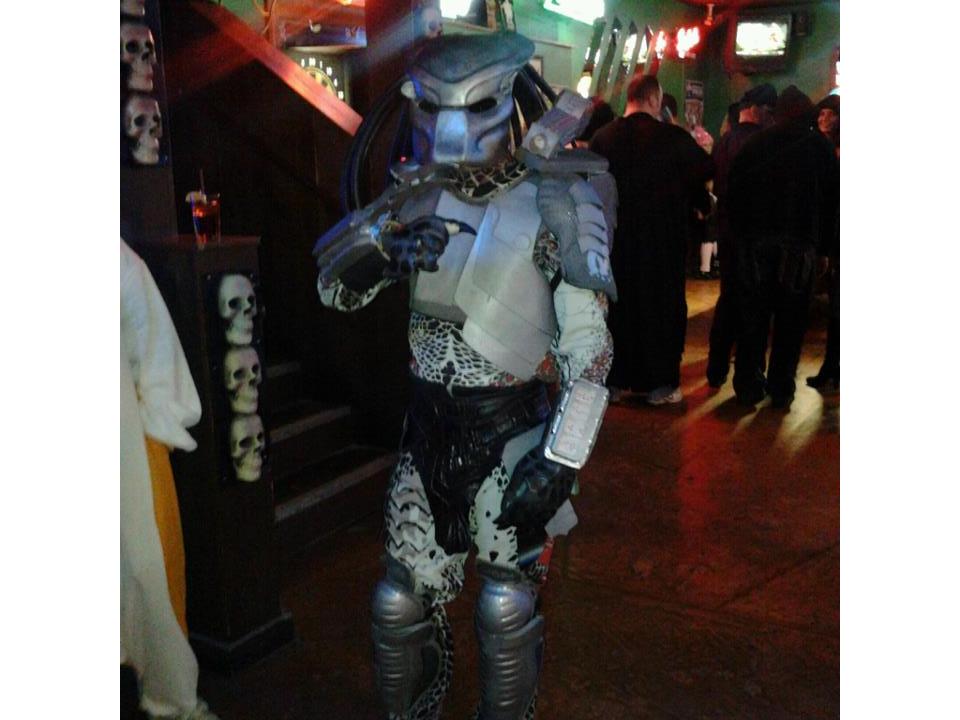 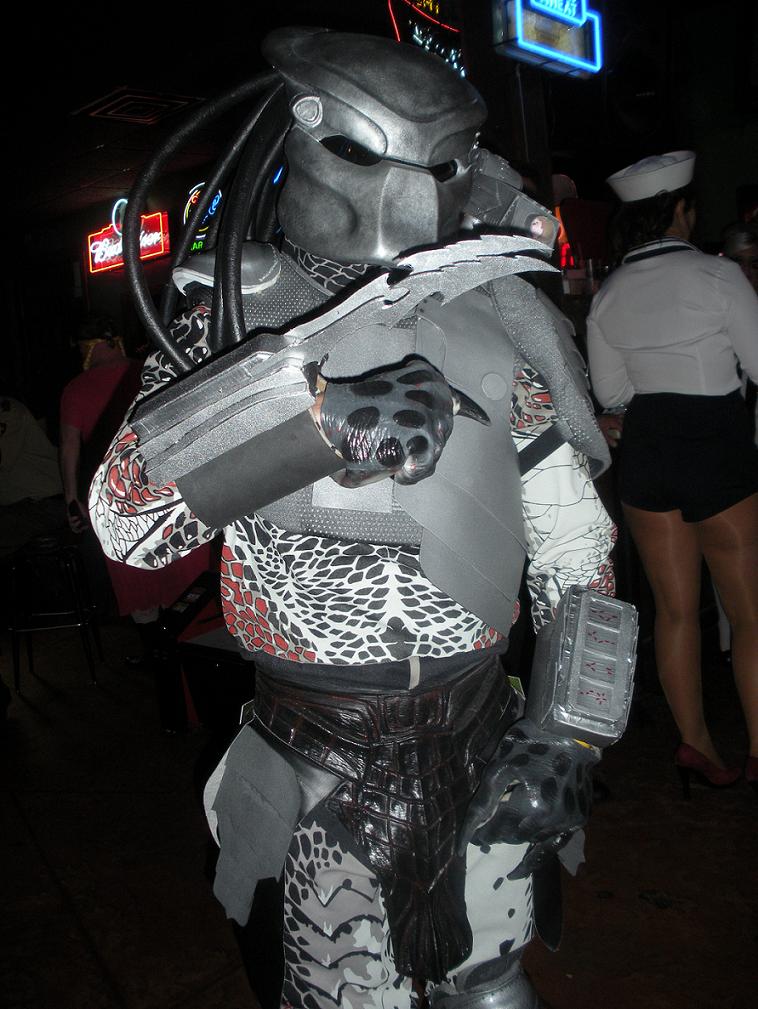 Here are the pics I promised you, as for the first hunt in the new suit I couldnt of been happier. I took 1st place in the costume contest in my category (scariest costume I def give you guys props that have full latex suits b/c I was sweating my ass off in this and it is a lot more breathable then latex). When I walked into the bar everyone couldnt believe how cool my suit was I got nothing but compliments and everyone wanted to take pics with me. I even had this one guy who couldnt get over how cool my suit was, everytime he walked by me telling me how awesome it was, he even acted as my campaign manager as he took a pic with his phone and started going around the bar telling people they had to vote for me so that was a bonus. I also cant thank my friends enough who helpled put up a perimeter around me to keep people from smashing my suit I suffer some minor damage but nothing that was not repairable. Even though I was hot and half blind it all was worth it in the end as I went on stage for the contest and everyone screamed for me as they took the vote its something I wont forget. And whenever you get time Andrew you can add these to the completed thread thanks.
Last edited by a moderator: Feb 26, 2015
S

I had the same experience with my suit. I got second prize, but still had about 100 pictures taken. Even pics with police. And no I wasn't arrested!

The funny thing was when the DJ announced me as the winner he called me Cyclopse. So I was like oh bummer I didnt win, but then some dude tapped me on the shoulder and handed me a 75.00 gift card to the bar. I was just thinking cyclopse wtf man how do you not know who I am and 5min before that you asked what my name was and my suit. And the prize was suppose to be cash money and more then 75 bucks at least that is what the poster said, the 5 dollar cover charge was suppose to be for the contest pot but nobody was taking money at the door so I dont what happen there, oh well still had a goodtime though.
S

Absolutely. The best part is seeing the reactions on peoples faces when you show up wearing it! Makes the hard work worth it.

Almost forgot to put this pic up as well, so as I was headed into a contest the next day (sunday) I pull into the parking lot and see another pred walking in, and I was like dam he's got a kick ass pred suit. So I walked up to him and just said "the hunterslair" and he's like yeah man im Macguyver. Once he said that I was like holyshit, cause I remember seeing his name on tons of awesome threads most notably the MR I suit. And as 2 fellow pred heads would do we talked about our suits and stuff (mostly his b/c it was awesome and had a lot of time put in it). But I just couldnt believe that a pred genius lives like 15 min away from me, usually guys are a couple hours away or further from each other. And its funny cause my g/f was just like oh my god there are more of you, so anywayI had to get a pic with him so here it is. 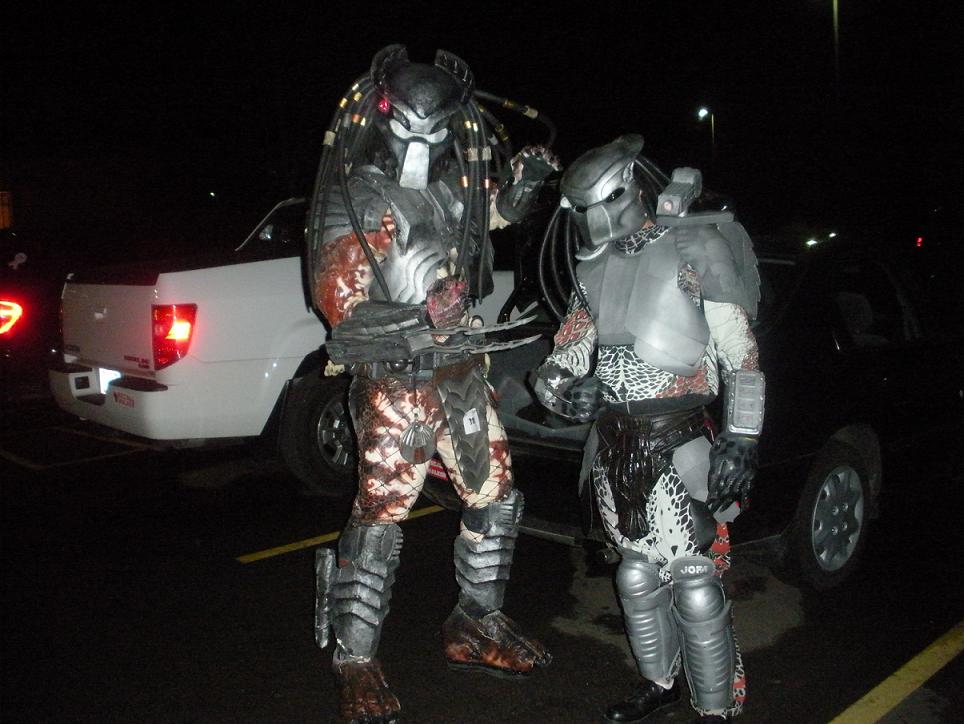